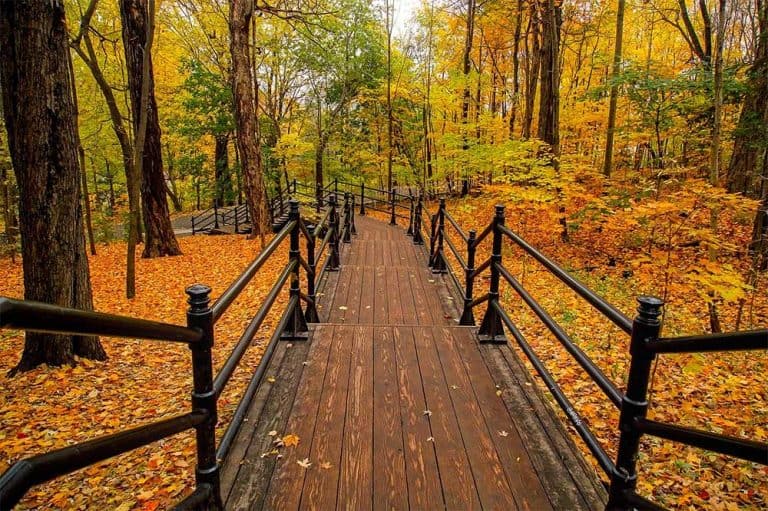 If you want to see Canada at its most magical, there’s no better time to visit than in the fall. Autumn in Canada is a special time of year. As the temperatures start to dip moving into a long & cold winter, much of the country erupts into a cavalcade of bright red, orange, and yellow hues.

Looking to plan the perfect fall trip to Canada? Get started planning your journey with this guide to the best places to see in Canada in autumn.

Looking for more ideas for your trip? Check out our Canada Country Guide for more recommendations on when to visit, where to go & what to do!

Where to go in Canada in autumn

Algonquin Provincial Park is a favourite escape for Ontarians. The sprawling provincial park covers over 7,600 square kilometres in Central Ontario. And although it’s popular year-round, one of the best times to visit Algonquin Park is in fall. 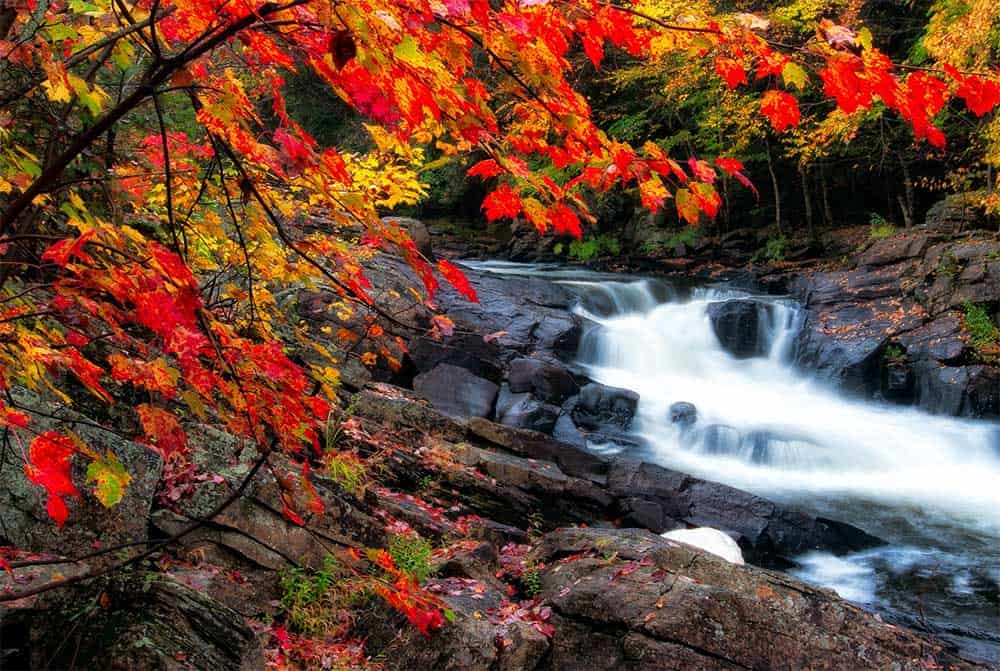 Starting in late September, the park’s maple trees start to erupt into brilliant reds and yellows. Visiting later in the Canadian fall season adds another layer to the experience. Towards the middle and end of October, the tamaracks, aspens, and red oaks hit their peak colours.

Despite being immersed in wilderness, Algonquin Provincial Park is easily accessible. It’s one of the best road trips from Toronto. The park is three hours by car from Ontario’s capital city.

Plenty of fall foliage viewing opportunities await around Banff National Park. Among the most memorable autumn scenes in Banff, though, is Larch Valley. 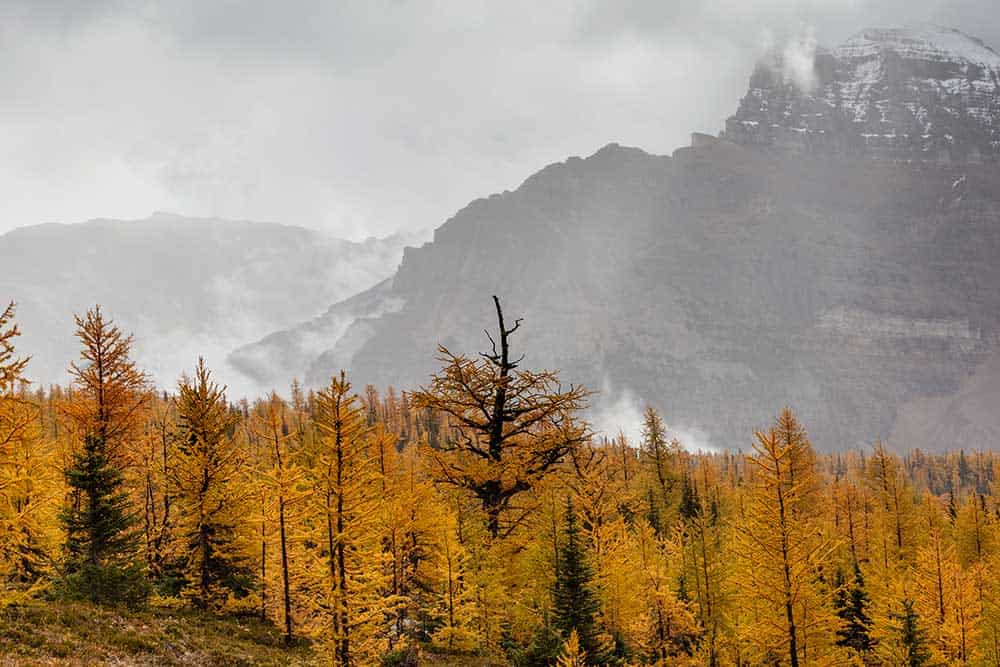 One of the best hikes in Banff, Larch Valley comes alive in fall. The valley’s larch trees are among the only coniferous trees to change colour and lose their needles. They shimmer with a distinct golden yellow to a backdrop of mountains.

Besides Larch Valley, here are a few other places to check out fall leaves in Banff National Park:

Home of one of the natural wonders of world, Ontario’s Niagara Region hardly needs an introduction. On any first-time Canada itinerary, seeing Niagara Falls in its full glory is a favourite stop. One of the best times to visit the Niagara Region, though, is in fall.

Like much of Ontario, the Niagara Region bursts into a cavalcade of fall colours during the short autumn season. But there’s more to the area during fall than first meets the eye. 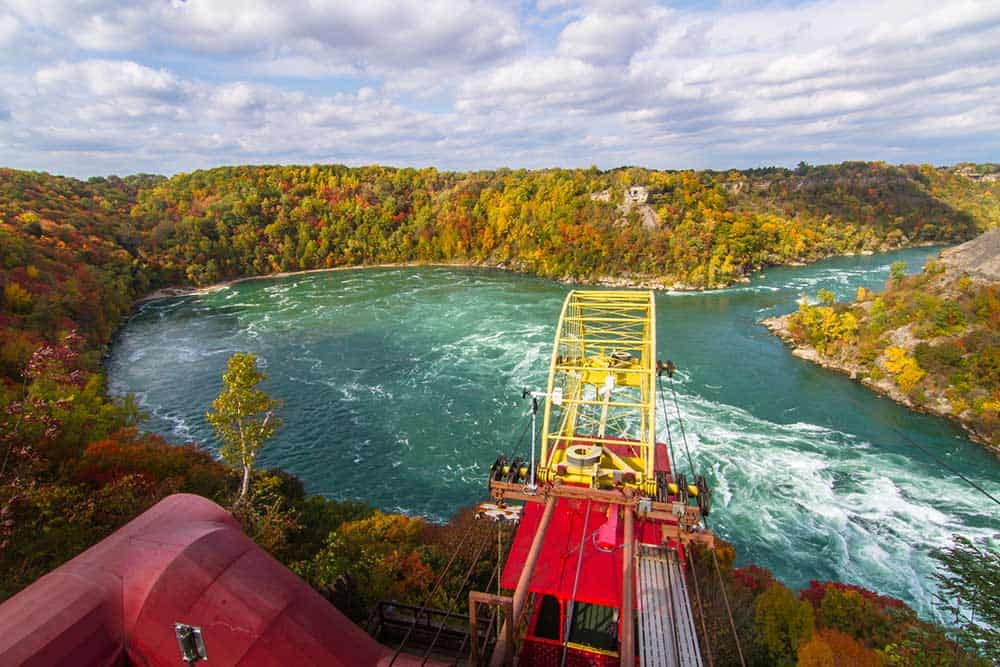 If you’re visiting for the scenery, start by driving along the scenic Niagara Parkway. This historic route follows the Niagara River along the Canada-U.S. border. It stretches from Niagara Falls in the south to the historic town of Niagara-on-the-Lake in the north. Along the parkway, you’ll witness some of the best fall colours in Ontario.

Choose to stay in Niagara-on-the-Lake and take a Niagara wine tour. You’ll see the whole wine-making process in action from grape harvesting to processing. You’ll also, of course, get to enjoy the palate-pleasing finished product!

Enjoying an East Coast Canada itinerary on your fall visit to Canada? Don’t miss out on beautiful Cape Breton Island in Nova Scotia.

For Canadian travellers, the island is most famous for its Cabot Trail. The Cabot Trail winds around the northern shores of Cape Breton Island. It’s often considered one of the most scenic drives in the world. (There’s a lot of those in Canada, eh?) 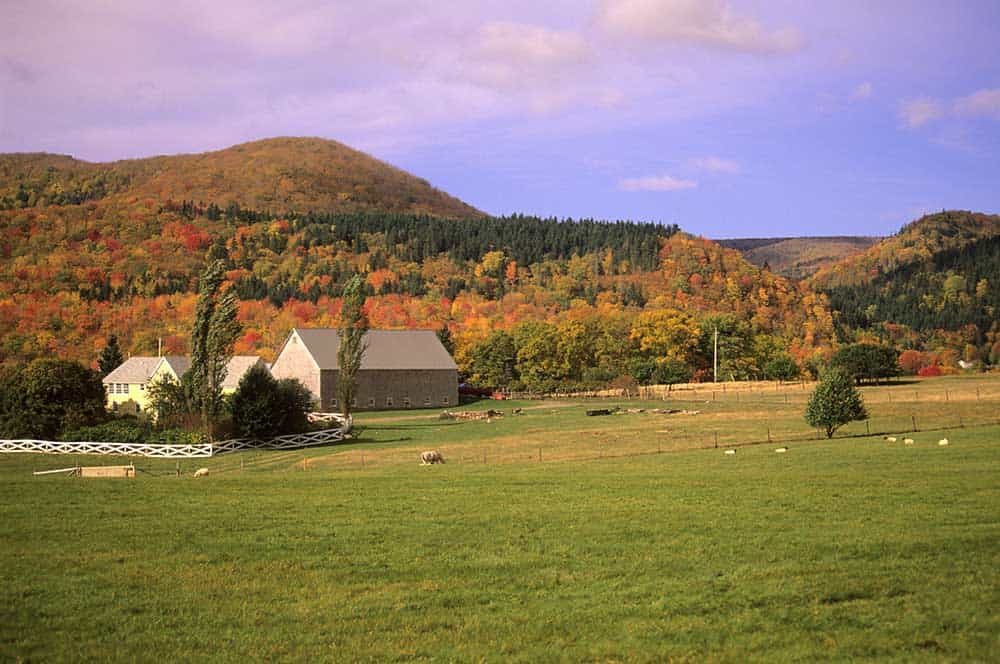 Visiting Cape Breton in fall, however, is a whole other world. Driving along the Cabot Trail in autumn, the fall foliage will be ablaze in a sea of red, yellow, and orange colours.

The fall leaves peak in Cape Breton in early to mid-October. The autumn season also coincides with the island’s famous Celtic Colours International Festival. Join in to celebrate the Celtic roots of Cape Breton and Nova Scotia. Eat, drink, and be merry to a barrage of live traditional music and cultural activities.

Famous for being home to some of the world’s highest tides, the Bay of Fundy is one of the coolest places to see in Canada. The bay separates New Brunswick from Nova Scotia’s peninsula.

Marvelling at the Bay of Fundy is as simple as driving & staying along the Fundy Coastal Drive. The Fundy Coastal Drive stretches from St. Stephen in the south to Sackville at the bay’s northern tip. The route travels via Saint John, the largest city in New Brunswick and one of the oldest cities in Canada. 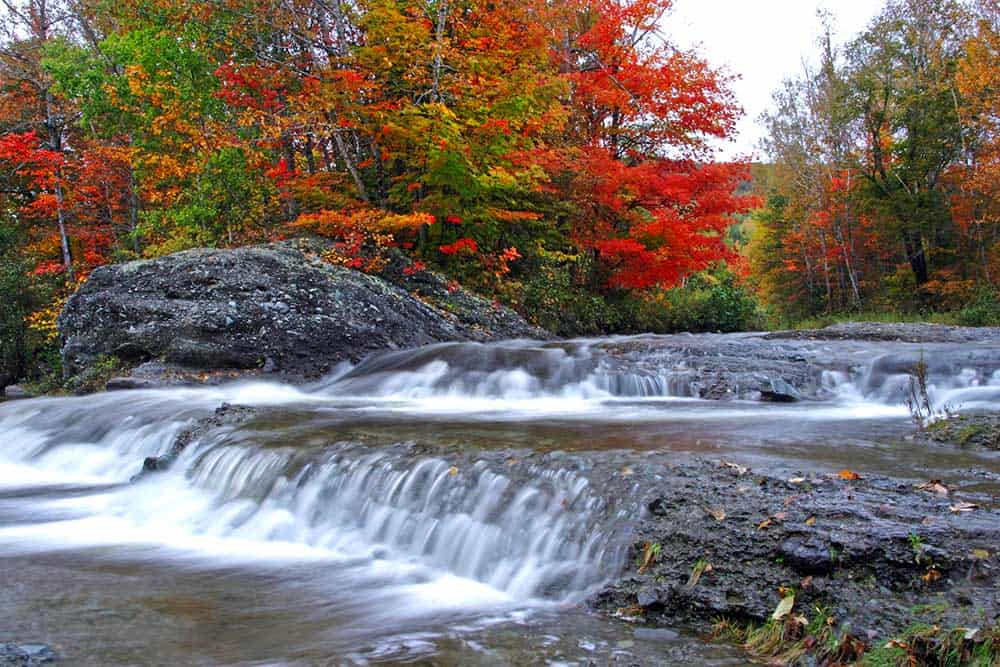 Many visitors stay along the drive in fishing towns like St. Andrews By-the-Sea to enjoy Canada’s best whale-watching. But visiting New Brunswick in fall should really put the Fundy Coastal Drive on your radar.

Along the drive, you’ll witness some of the finest autumn colours in Canada. The leaves hit their peak in the first half of October, leading up the Canadian Thanksgiving holiday weekend.

Gros Morne National Park in Newfoundland is among Canada’s most breathtaking places. And while it’s a great place to visit year-round, Gros Morne hits its stride in fall after the summer tourist crowds head home. Visiting the national park as its serenity returns will be unforgettable! 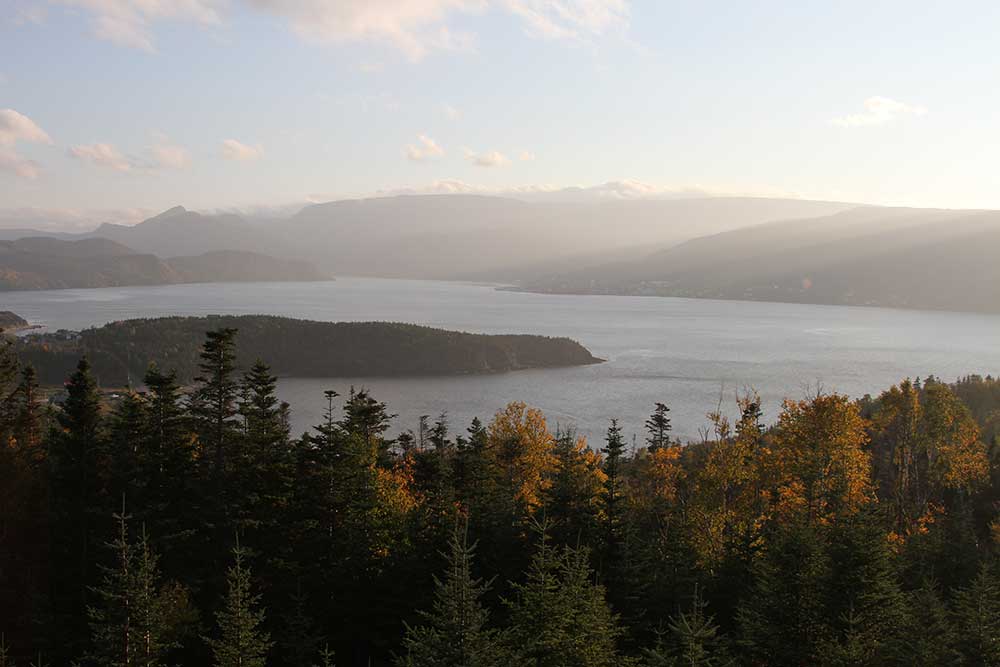 The UNESCO World Heritage Site of Gros Morne National Park is most popular as a paradise for hikers. As you wander among its hiking & walking trails, you’ll experience the park at its most magical. The changing colours envelop the forest to a backdrop of fjords, coastal cliffs, and rolling hills. You may even catch some wildlife wandering about. Keep your eyes peeled for moose and caribou.

There’s hardly a more iconic journey in Canada during fall than the Agawa Canyon Tour Train. The famous Agawa Canyon sightseeing train runs north of Sault Ste. Marie, Ontario. It starts its yearly quest for autumn plumage around the end of September and beginning of October. 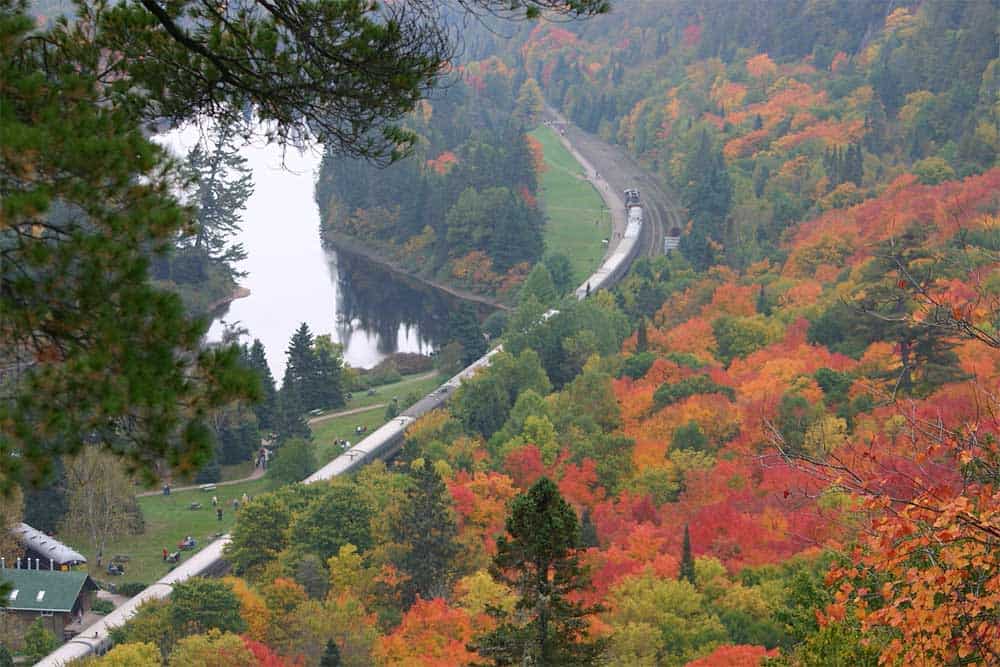 The Agawa Canyon Tour Train departs daily in the fall season. The 366-kilometre round-trip whisks you through the Northern Ontario hinterlands. You’ll chug alongside pristine lakes, rivers, and deep forests.

During the famous fall trip, you’ll stop for an hour and a half at Agawa Canyon Wilderness Park. Here, you’ll find family-friendly walking trails snaking past waterfalls and lofty lookout points. Stop for a breather to witness the majesty of the canyon from above.

At any time of year, visiting the Okanagan Valley is a great idea. Perhaps no season is better than fall, though. Like in much of British Columbia, autumn temperatures in the Okanagan are warm & pleasant. They’re perfectly tuned for outdoor adventures. 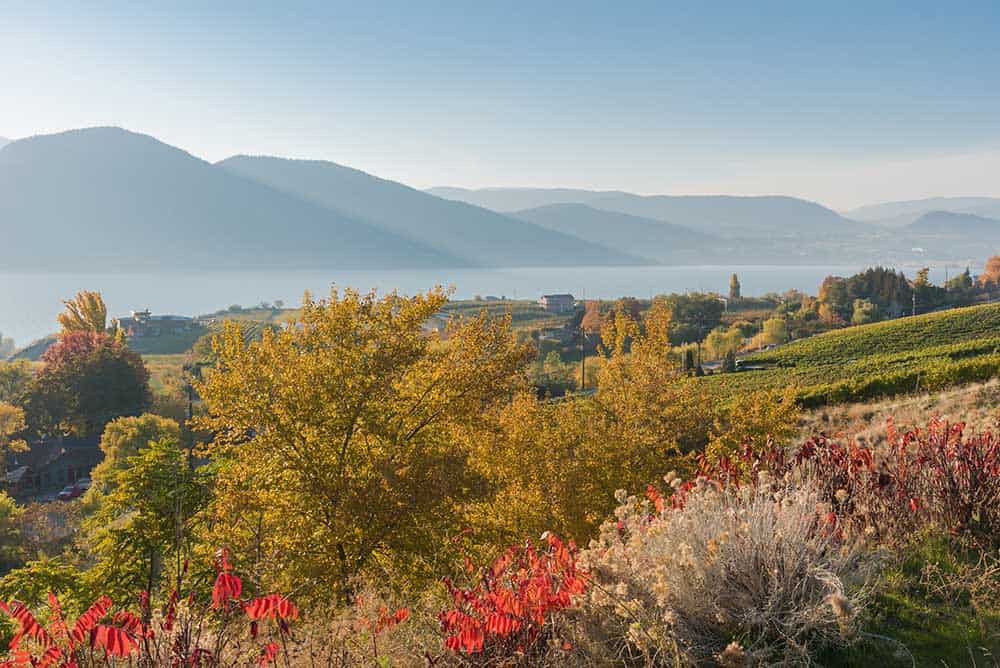 For your autumn travels, base yourself in Kelowna, the region’s main urban centre. The most popular hiking trails in Kelowna become ablaze with colours starting in mid-October.

Besides the usual Canadian fall delights, the beginning of October marks the region’s wine harvest. The harvest is celebrated by the Fall Okanagan Wine Festival. There are about 170 wineries in the Okanagan Valley and about 40 wineries in Kelowna alone. Wine lovers will love a chance to tour some of the best-of-the-best this lovely time of year!

Quebec is known for its natural beauty. And nowhere does it shine more than around the Laurentian Mountains. The range’s highest elevation is less than half that of the Canadian Rockies in Western Canada. Nonetheless, The Laurentians are a gorgeous and accessible slice of nature. 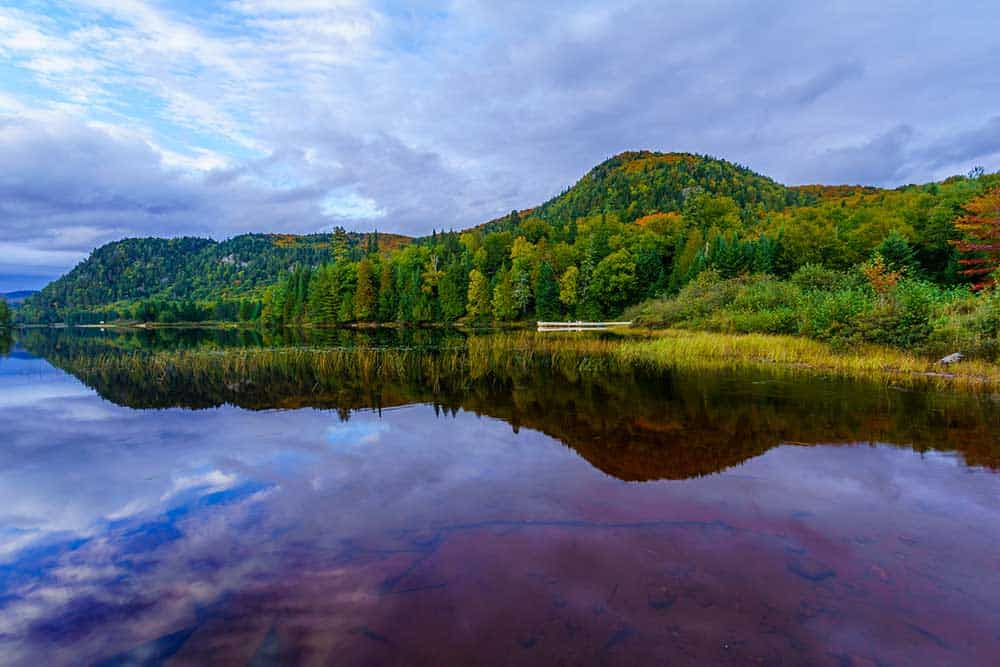 The fall season in The Laurentians begins at the end of September. It continues into mid-October when the autumn leaves start to hit their most colourful. On your road trip through The Laurentians check out Quebec’s famous sugar maple trees as they flare into fiery reds. You’ll also catch bright yellows and stunning oranges among the birches and beeches.

Although known as a top destination in Quebec in winter, Mont-Tremblant is also among the best places to catch the fall leaves at their finest. The popular ski resort town is located two hours northwest of Montreal.

If you find yourself on an East Coast road trip in autumn, set aside time for exploring Prince Edward Island (PEI). The island enjoys a more moderate climate than its Atlantic provincial brethren. PEI has one of the biggest windows for viewing the fall leaves at their brightest. 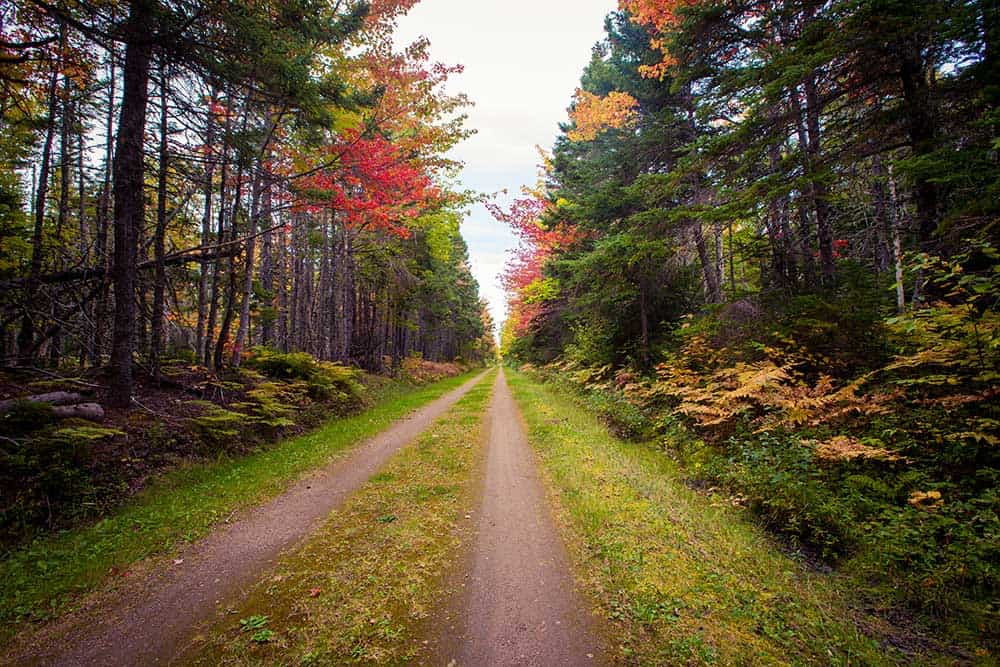 It won’t matter which section of the Confederation Trail you trot along. You’ll have no problem scoping out vibrant reds, oranges, and yellows. Despite its size, Prince Edward Island is home to a wide assortment of tree species. Look out for red maples, sumacs, populars, and birches.

Aside from the colours, the autumn months fall within PEI’s harvesting season. At the province’s farmers’ markets, a wide assortment of fresh fruits and vegetables await.

Foodies should time their visit to September to check out the PEI Fall Flavours Festival. The festival runs for the entire month across the entire province. It’s among PEI’s biggest food & culture celebrations of the year.