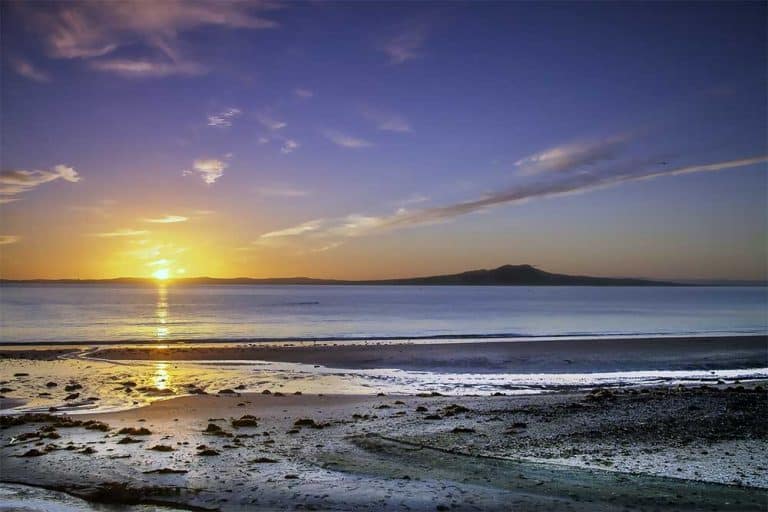 Surrounded by sea, Auckland didn’t get its nickname “City of Sails” without reason. The city’s maritime history is no secret. But one thing might surprise you while searching for the best places to visit in Auckland: Auckland’s beautiful beaches.

The best beaches in Auckland are as eclectic as New Zealand’s largest city itself. Wandering to the oceanfront fringes of Auckland, you’ll stumble upon it all. Looking for pristine white-sand beaches? No problem. Remote black-sand shorelines surrounded by volcanic landscapes & coastal forests? You’ll find those, too.

Ready to experience Auckland’s finest seaside pleasures? Get started with this guide to the best beaches near Auckland…

Cheltenham Beach is one of the best places to start your tour of Auckland’s seaside. It’s located in the quiet suburb of Devonport in the North Shore region.

Thanks to its relaxed vibe, Cheltenham Beach is popular with locals. Much of Devonport’s laid-back reputation feeds off the beach’s chill-out factor. 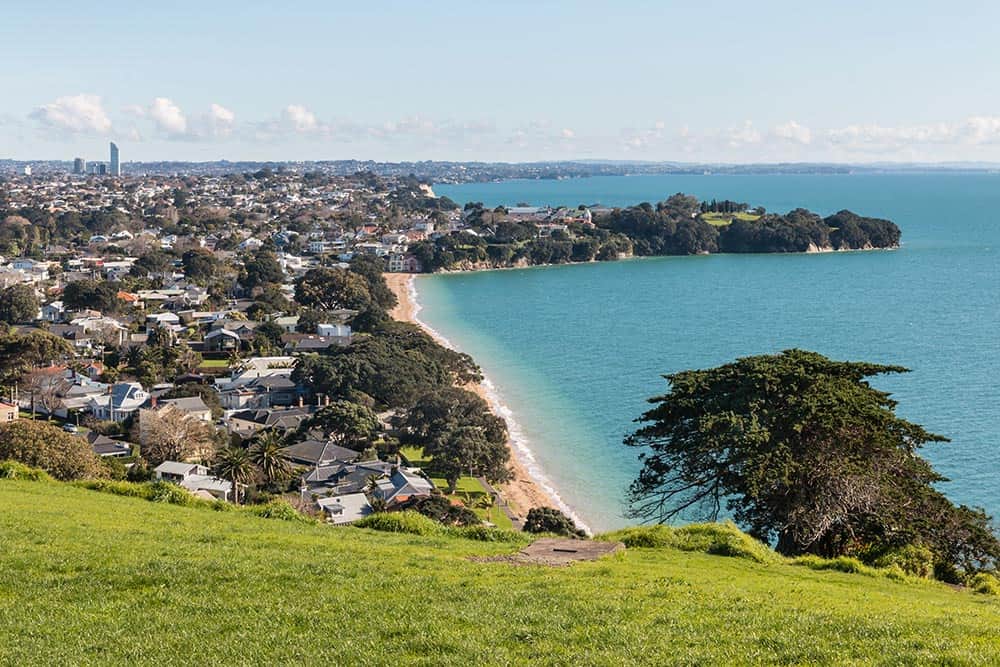 One of the beach’s most compelling features is its views towards Rangitoto Island. Cheltenham Beach is also connected in its southeast corner to the North Head Historic Reserve. The point once served as New Zealand’s most important historical defence site.

Takapuna Beach rolls with calm waters and breathtaking views of the Hauraki Gulf. There’s also an assortment of activities and watersports here. It’s no wonder that Takapuna Beach has become one of the most popular beaches in Auckland. It’s especially favoured by families with young children. 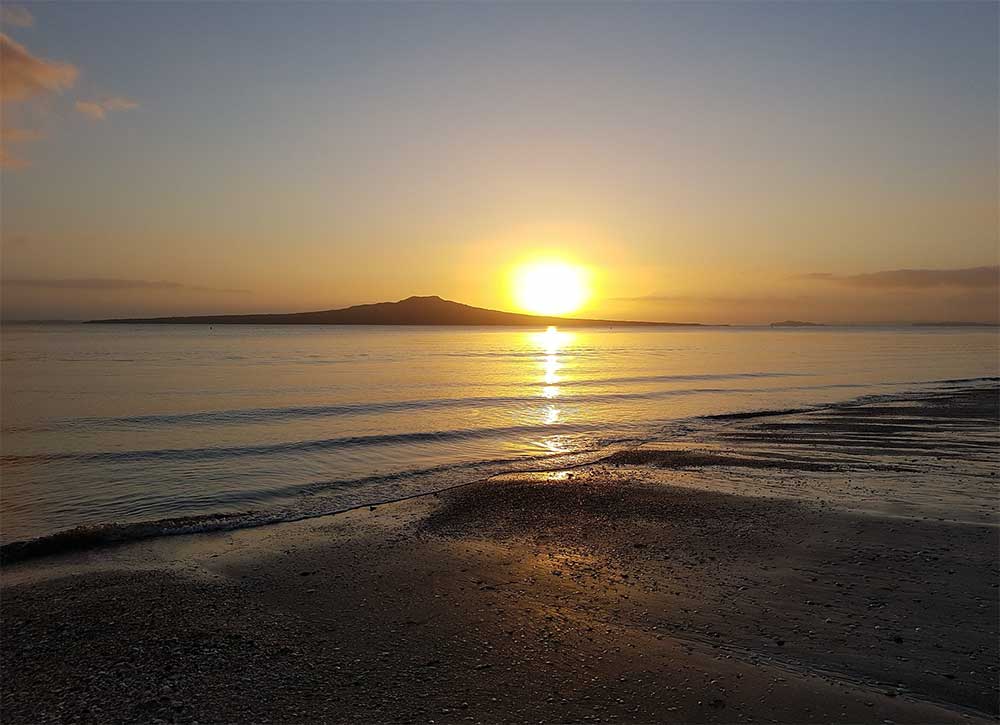 Another drawcard to visiting this famous Auckland beach is the area around it. Takapuna is a lively beachfront town full of great restaurants, bars & cafés. There’s also a popular market here on Sundays.

Karaka Bay is a lovely sandy beach at the wide mouth of the Tamaki River. It’s tucked away in the suburb of Glendowie to the west of Auckland’s city centre.

The beach is widely thought to be one of the four signing places of the Treaty of Waitangi. Signed in 1840, the treaty established New Zealand as a British crown colony. 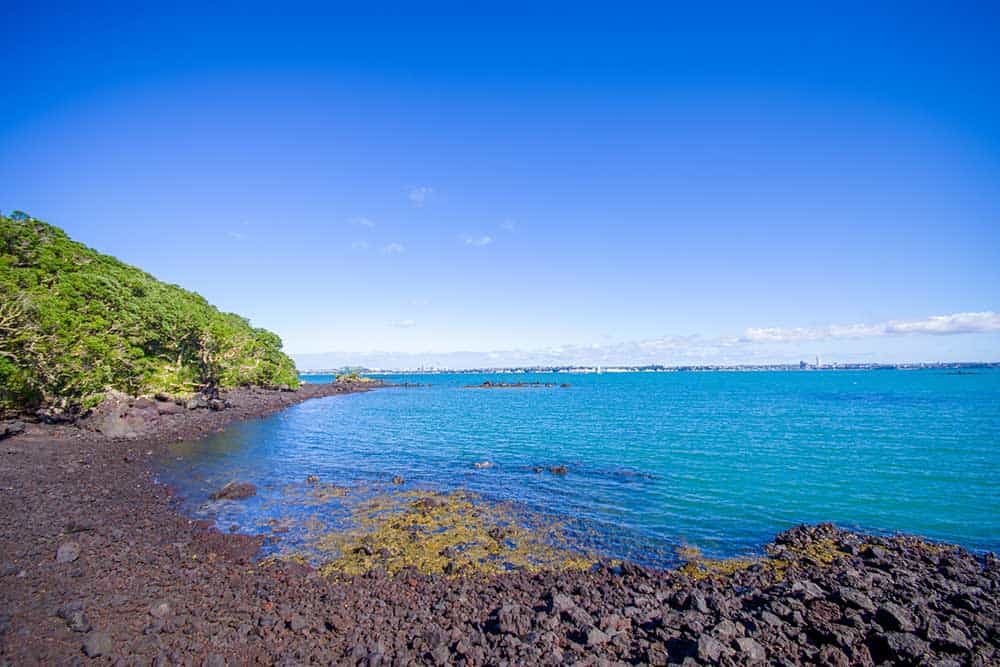 Although only a 30-minute drive from the city centre, Karaka Bay Beach is among the quietest of Auckland’s best beaches. There’s no road access to the beach itself.

From Peacock Street above, you’ll need to scuttle down a steep path to get down to the beach. Once you arrive, you’ll enjoy the seabreeze and bay views in the shade of the pohutukawa trees.

Only 35-minute ferry ride from downtown Auckland, Waiheke Island is one of the most popular day trips from Auckland. It’s a must-see destination if you’ve got more than a day in Auckland.

Waiheke Island is most famous for its award-winning wineries and vineyards. But there’s another big reason to visit Waiheke Island: its beaches. And none is more worthy of a visit than Oneroa Beach. 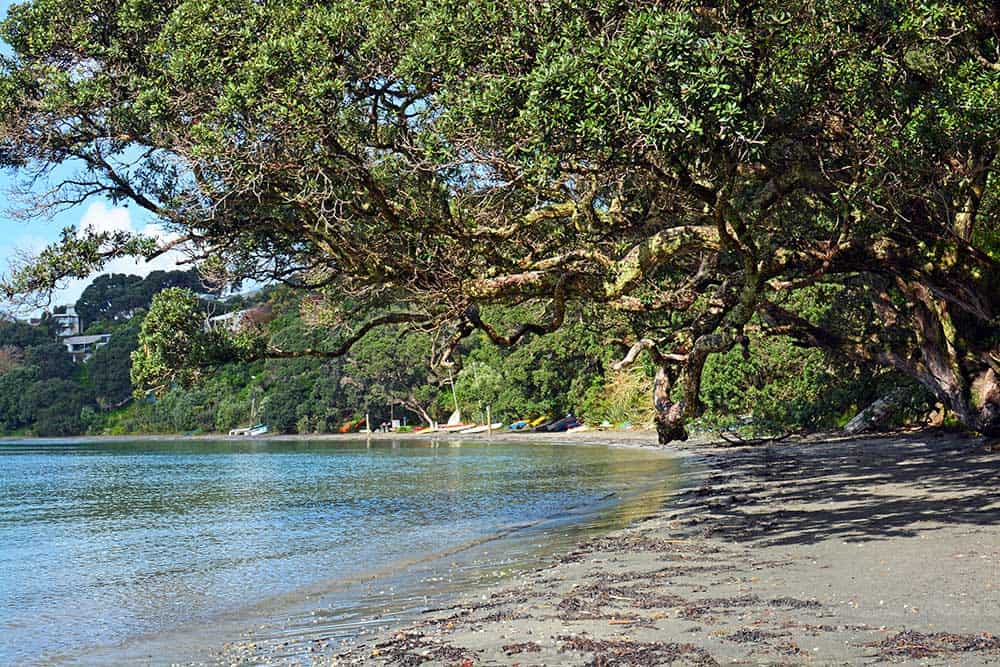 This lovely beach is set along a quiet sheltered bay in the Hauraki Gulf. It sparkles with white sand and is a fantastic stop for your Waiheke Island itinerary.

After enjoying the seaside pleasures of Oneroa Beach, explore the pleasant town. It’s home to an eclectic selection of restaurants, cafés, and boutique shops.

You’ll also enjoy several great walks in the area. Options include the route to Newton Reserve and the longer Park Point Coastal Track.

Sprawling along the west coast of Auckland, Piha Beach is among the city’s most popular seaside destinations. The black-sand beach is widely touted as the the top surfing destination in Auckland. The waters around Piha roar with powerful swells and waves. 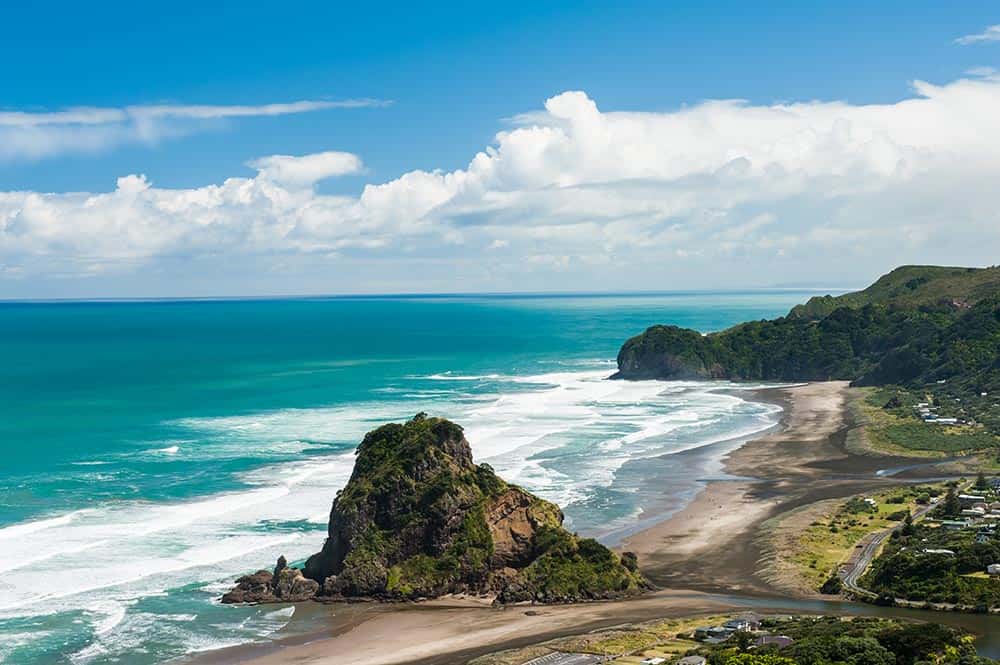 The beach is most popular for surfing and swimming in the water—when it’s safe, of course! But there’s plenty more to do in the area.

Add to the adventure by climbing Lion Rock, the craggy hill shooting through the centre of the beach. The views from the top over the Tasman Sea, the beach, and coastal forests are spectacular.

Piha Beach also lies on the edge of the rugged Waitakere Ranges. The region is one of Auckland’s best outdoor adventure destinations and home to some of the best hiking trails near Auckland.

Orewa Beach is among the longest and most popular beaches in the Auckland. It stretches three kilometres along the east coast of New Zealand North Island, 40 kilometres north of downtown Auckland.

The golden sand Orewa Beach features a relaxed surf. Thanks to its safe swimming, it’s a hit for families looking to spend a day away from the hustle and bustle of the city. 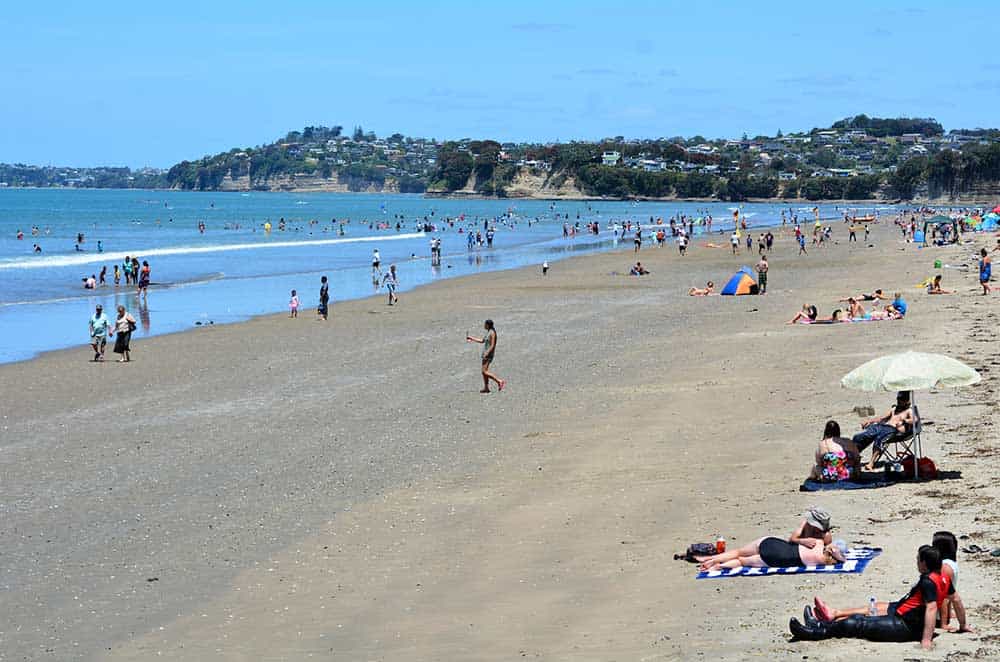 Besides swimming, there’s plenty to do at Orewa Beach. Popular activities include kitesurfing and enjoying a picnic.

The resort town of Orewa is also quite pleasant itself. The streets are loaded with quaint shops and excellent restaurants & cafés for your shopping, eating & drinking pleasure.

Want even more serenity for your Auckland beach adventure? Head a few kilometres north to Waiwera Beach. Nearby, you can also explore the coastal forests. End the day by settling down at Wenderholm Regional Park Beach.

Muriwai Beach is perched upon Auckland’s rugged west coast. The popular beach is a favourite destination for surfers and bird-watchers alike.

For adrenaline junkies who love the ocean, the strong Tasman Sea surf at this volcanic sand beach beckons. (Casual swimmers might want to look elsewhere though.) 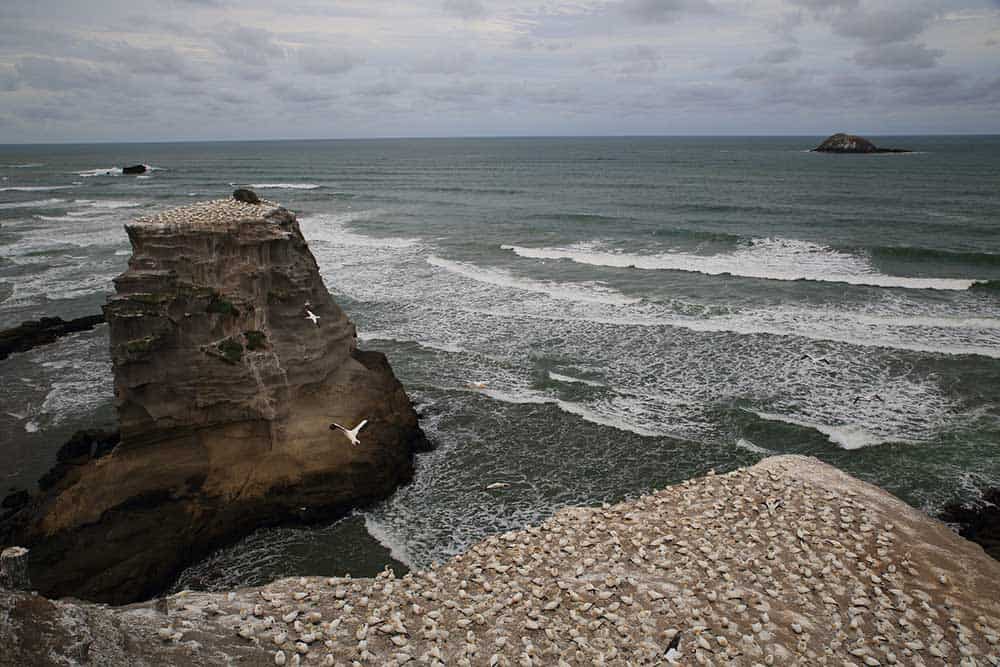 Hitting the waves not your thing? Muriwai Beach is also famous for its cliff-top gannet nesting colony. Grab your telephoto lens or a pair of binoculars to watch the distinctive seabirds chill out on the rocks.

For beautiful natural scenery, few beaches near Auckland can compete with Karakare Beach.

Karakare Beach is a few kilometres south of Piha. Although accessible by car, Karakare has a more remote and dramatic feel than other beaches in the area.

The stunning natural beauty has caught attention internationally, too. Karakare Beach has provided the backdrop for several popular films including The Piano. 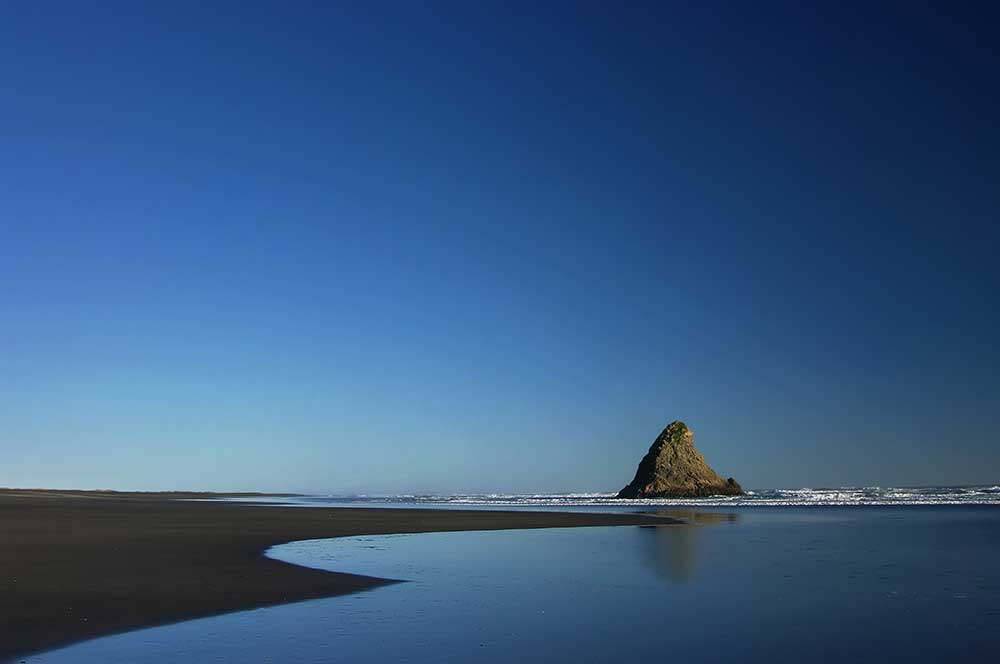 After enjoying its spectacular landscapes and wearing out your camera’s shutter, there’s more to explore. The area around the beach is also a popular outdoor recreation spot.

Be sure to carve out a little time on your visit to check out the nearby Karekare Falls. These beautiful waterfalls are a short 10-minute walk from the main carpark.

Don’t want stray too far from central Auckland? Cross over Hobson Bay on the scenic Tamaki Drive to check out Mission Bay Beach.

Located in the town of the same name, Mission Bay Beach is one of Auckland’s most popular beaches and afternoon getaways.

Mission Bay is only a 20-minute drive from central Auckland. But the suburb has a definitive laid-back resort town vibe. It’s an interesting contrast to fast-paced Auckland city life.

On the water, there’s a whole whack of fun things to do in Mission Bay. You can go swimming, canoeing, and sea kayaking. One of the simplest pleasures of a visit here, though, is eating & drinking. Wash down some fish & chips with a relaxing drink while soaking in views of Rangitoto Island over the Hauraki Gulf.

Maraetai Beach is the perfect spot to escape the buzz of Auckland. The beach offers sweeping views north towards Waiheke Island. You even see as far east as the Coromandel Peninsula from its shores.

Thanks to its gentle waters, jetty, playground, and seaside ice cream shops, Maraetai Beach is a popular with families. 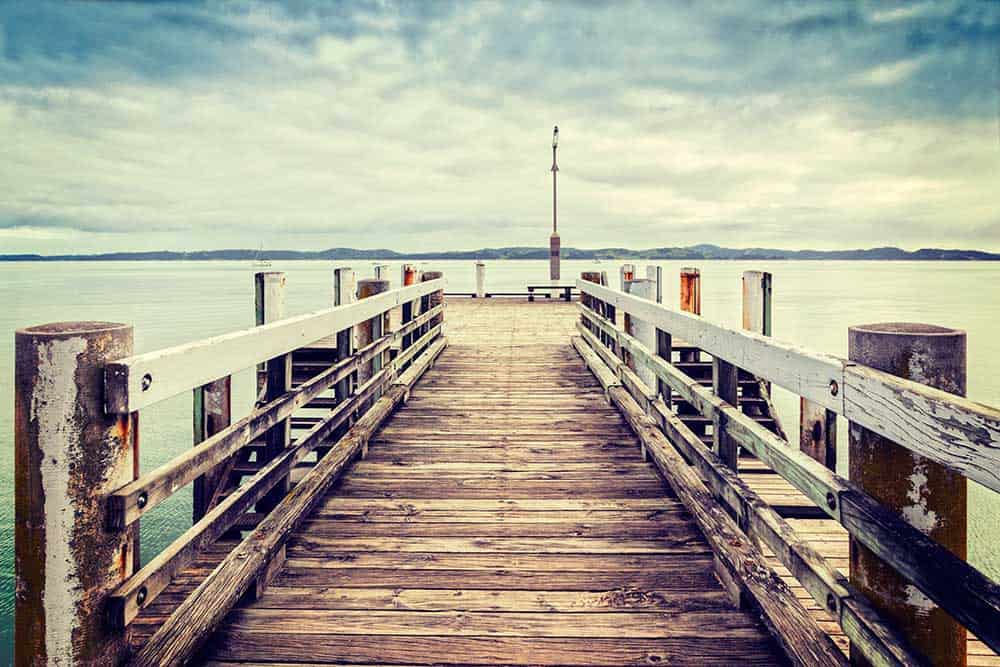 Done enjoying the small & lovely stretch of golden sand? Continue your visit to Maraetai with some active adventure.

For an easy trek, opt for the one-hour coastal walk to Magazine Bay. Or drive 10 minutes down the coast to Duder Regional Park for a hike alongside some friendly sheep.

Perched upon beautiful St Heliers Bay, St Heliers Beach is one of the finest beaches near Auckland. It’s located in the upscale eastern Auckland suburb of St Heliers. But that’s not to say you need to roll in the dough to enjoy a dip and the views here. 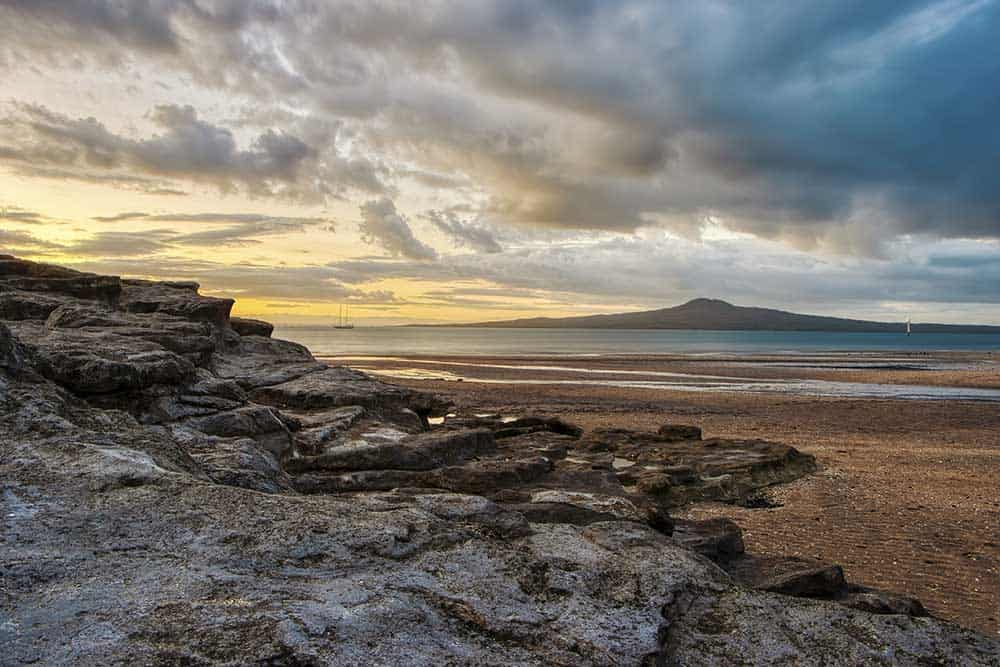 On the beach itself, you’ll enjoy fun water activities like kayaking and kitesurfing.

The town of St Heliers is also a great place to while away the day. There’s a handful of great cafés and restaurants in the area. Settle in to indulge in a quick cup of coffee & a dessert. Or slip your visit into the evening to enjoy an upscale French or Italian meal.

Like other Auckland west coast beaches, Bethells Beach showcases New Zealand North Island’s wilder side. While the beach itself is a hit, what’s most amazing here are the marvels pitched around it. 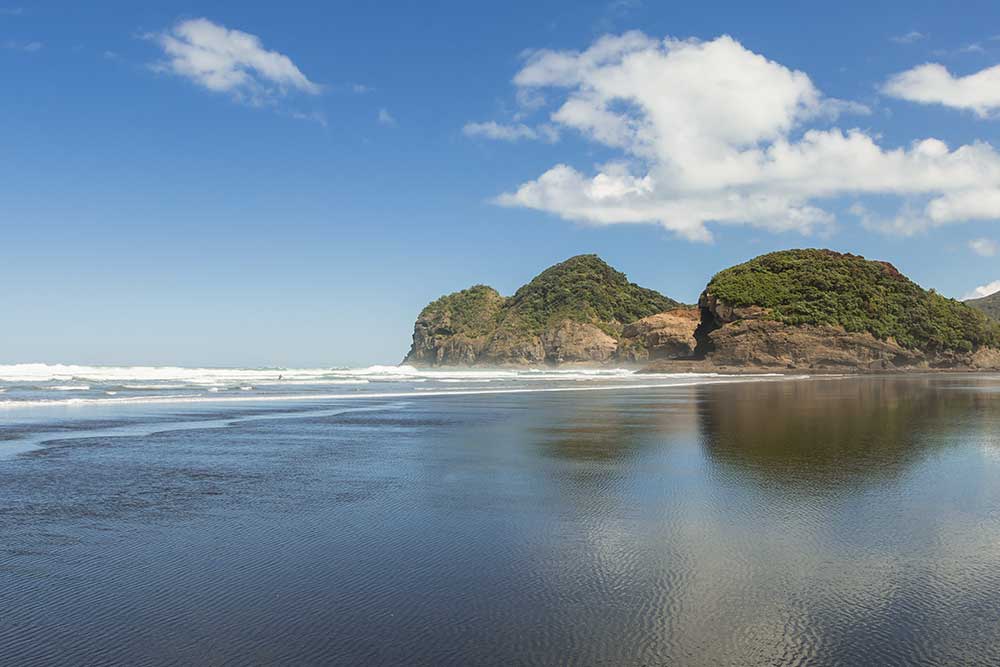 Spending a day at Bethells Beach, you can enjoy an array of activities including surfing and hiking. Take time to wander along sand dunes and meander on hiking trails (including the Te Henga Walkway). You can also explore its cave to get the full experience of this rugged slice of nature.

Long Bay Beach is located on the eastern coast of the North Shore. The beach features a one-kilometre-long stretch of sand set alongside the forested Long Bay Regional Park. The beach also connects to the 970-hectare Long Bay-Okura Marine Reserve. 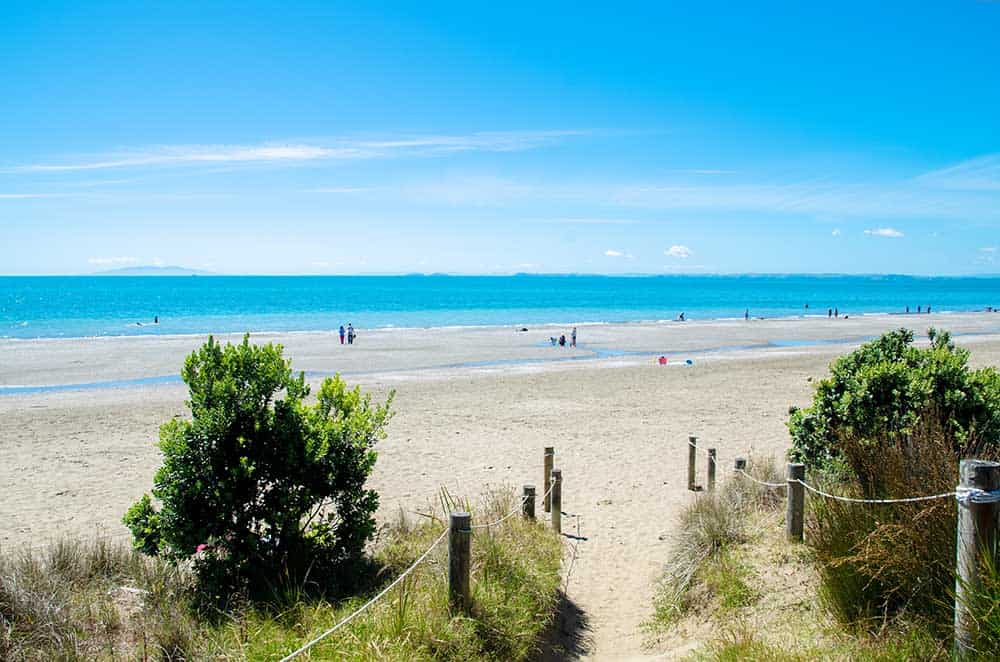 Even you catch a more hectic day though, you’ll have no trouble finding a more isolated beach within walking distance.

Want to squeeze seaside fun into your Auckland vacation without hassle? With less than a 15-minute drive from Auckland CBD, you’ll dazzle at Point Chevalier Beach. 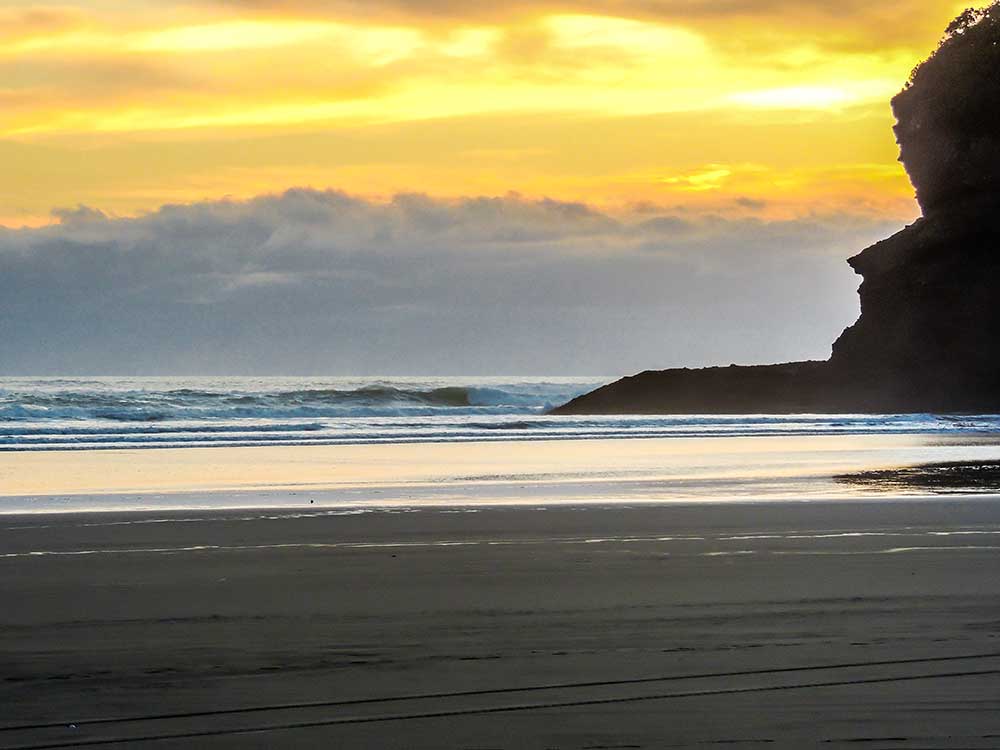 Most inner-city beaches in Auckland sit along the coast. Point Chevalier shuns the norm. It’s perched upon a small peninsula in Waitemata Harbour. The sheltered location leaves the waters calmer for swimming, especially at high tide.

Point Chevalier Beach is a popular destination for families. Aside from its lovely golden sands, the beach features an excellent playground. Kids will love the climbing net and flying fox.