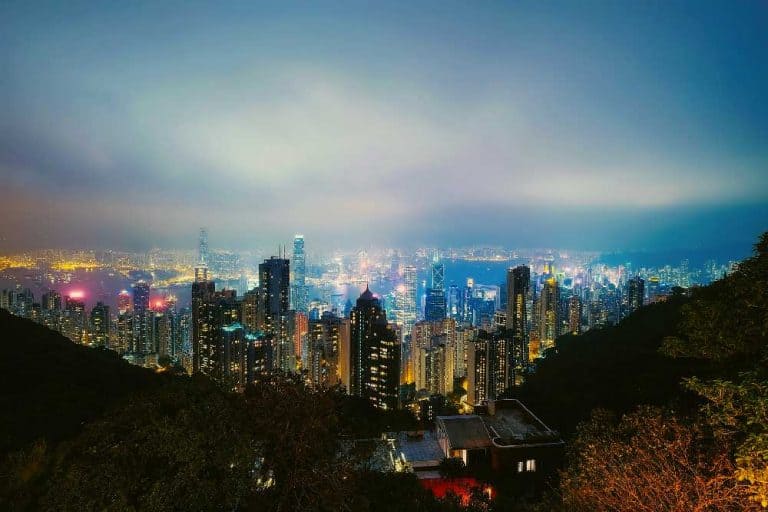 Whether you’re travelling to Hong Kong on business or for pleasure, laying your head down at one of the best hotels in Central District presents a superb chance to get to know the city.

While most travellers immediately throw themselves into the chaos of Kowloon across Victoria Harbour, Central District hotels offer up the tamer side of Hong Kong while still delivering plenty of sightseeing opportunities.

Want more options for your trip to Hong Kong? Check out this complete guide to where to stay in Hong Kong!

Why stay in Central District?

While most first-time visitors to Hong Kong (especially those on a budget) will most likely end up staying in Kowloon, Central District makes for a great dark-horse HK accommodations alternative.

Staying in Central District, I quickly fell in love with its hilly geography and sporadic layout of uphill climbs and staircases. It was simply the perfect area for enjoying the aimless wandering that’s characteristic of my travel style.

Whereas elsewhere in Hong Kong seems to bustle with crowds day and night, Central District provides more opportunity to relish in quieter moments while still being close to the city’s top attractions.

Outside of the rush hours and daily grind (barring bar nights in Lan Kwai Fong, of course), the streets of Central District are nowhere as packed as elsewhere in Hong Kong. It gives the area a much more relaxing feel for exploring.

On top of that, its—well, central!—location also makes Central District the perfect base to explore the wilder fringes of Hong Kong Island.

Within a quick bus ride from Central, you’ll get hooked up with some of Hong Kong’s best hiking trails. From your Central District hotel, many of the best day trips from Hong Kong are also easy to embark upon. 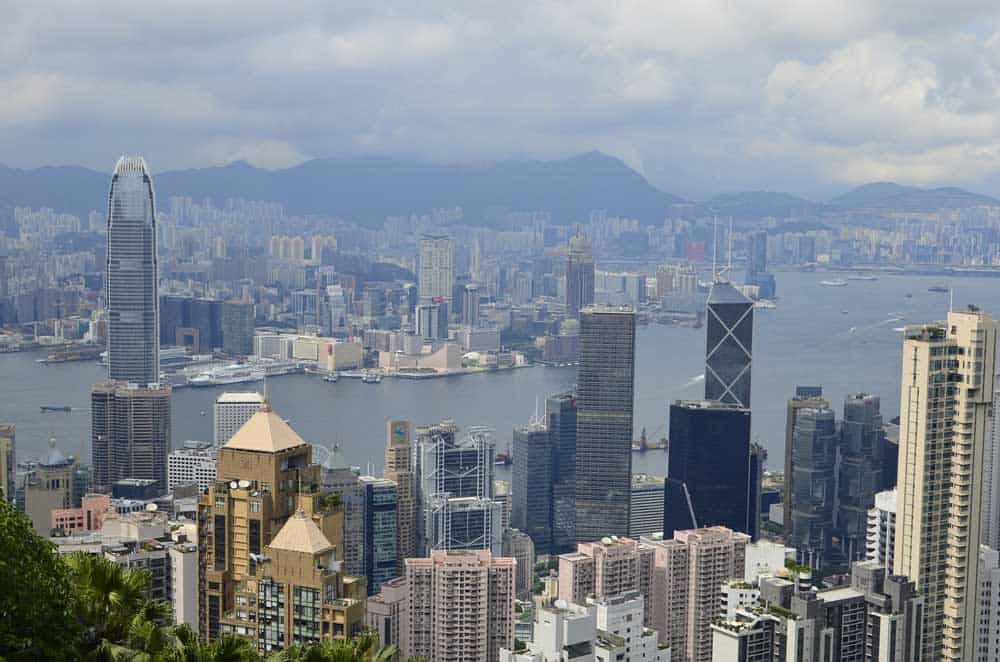 For shopaholics, there’s hardly a better place to stick close to than Central.

Within Central District itself, there’s a whole slew of high-end boutiques and shopping centres. Other prime Hong Kong shopping destinations like Causeway Bay are just a few MTR stops away.

Hosting one of the world’s most important financial districts, it’s hardly surprising that Central is also home to some of the very best luxury hotels in Hong Kong.

You’re hard-pressed to find bargain-basement budget hotels in Central District. The experience of staying in Central District is, however, far less riddled with annoyances than laying down your head elsewhere in areas more focused on budget accommodations.

Where to stay in Central District: Top hotels & best accommodations

It’s rare to find a hotel anywhere in the world as impeccable as the Mandarin Oriental Hong Kong. Peering out upon Victoria Harbour, this elegant 5-star hotel prides itself on a classic world-class accommodations experience that’s unmatched in the Hong Kong luxury market. It’s no wonder it’s often listed among the best places to stay in Central District! 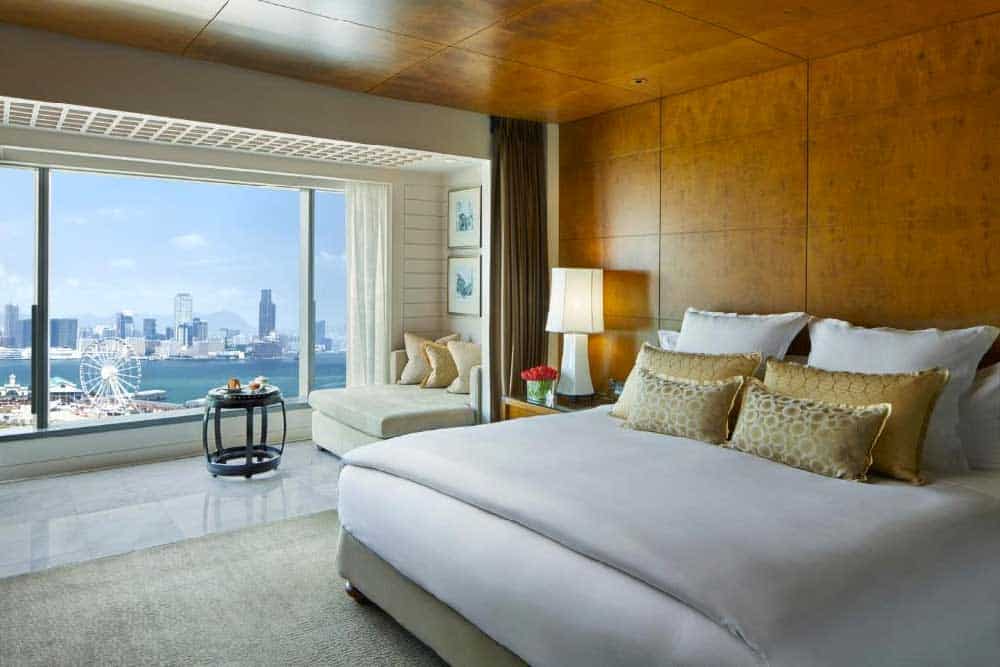 Expansive floor-to-ceiling windows shine in wondrous harbour and city views that bestow a new appreciation of one of the world’s finest skylines.

To squeeze the most out of your stay at the Mandarin Oriental Hong Kong, unwind with some time in the relaxing spa. It features a steam room, hot tub, and sauna along with traditional Ayurvedic and Chinese treatments.

Alternatively, you can spend a night sipping wine while savouring modern French cuisine at the Michelin-starred Pierre, one of the hotel’s ten delectable on-site restaurants.

An air of sophistication swirls around the gorgeous Four Seasons Hotel Hong Kong, one of the top choices for where to stay in Central District.

Like other Central District hotels of its ilk, this brilliant 5-star delivers spacious and luxurious rooms. The best of the bunch feature floor-to-ceiling windows that gaze onto Victoria Harbour & Victoria Peak or out to Hong Kong’s famous skyline. 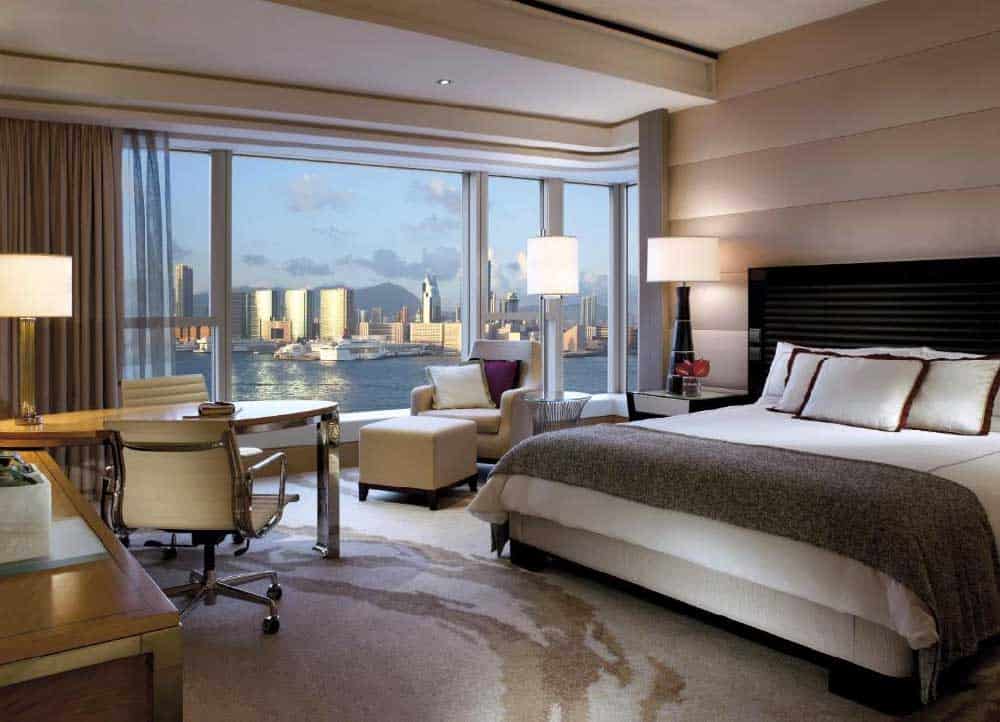 Among the best experiences of staying at the Four Seasons Hotel Hong Kong though is a chance to dabble in its succulent cuisine.

Shopoholics will love spending their HK nights at The Upper House, one of the best hotels in Central District.

Located above Pacific Place, the top destination for fashionistas in Central, this top luxury property impresses with spacious modern rooms boasting striking views of Victoria Harbour and The Peak. 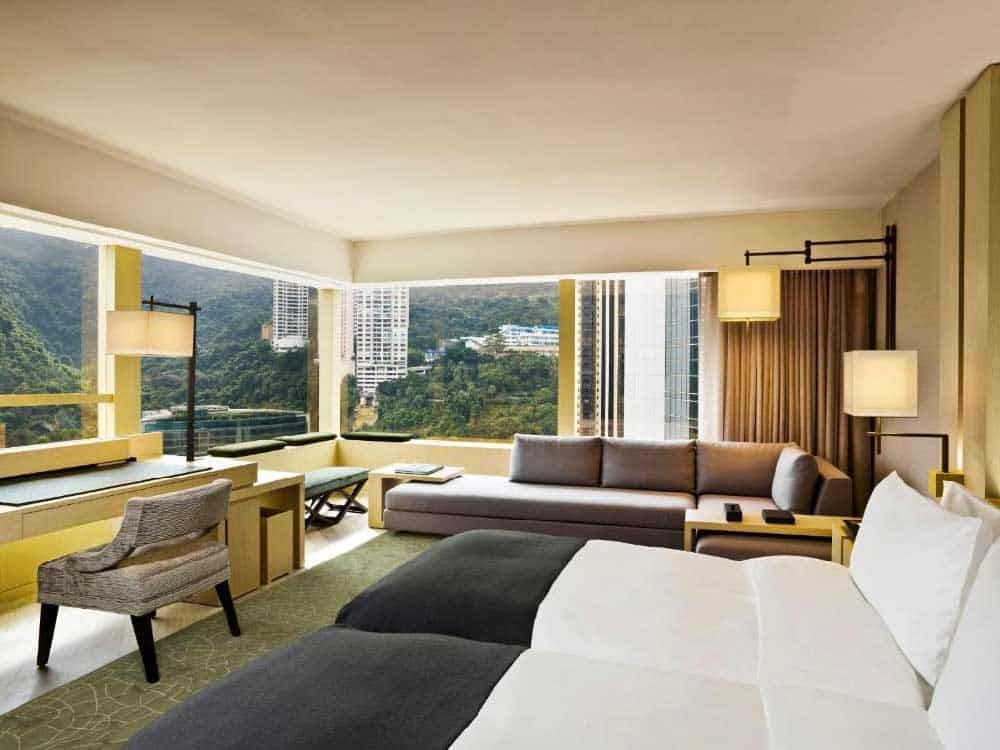 Besides large elegant rooms with all the requisite amenities (including a free Maxi-bar), The Upper House keeps you in tip-top shape with its well-stocked fitness centre. This Central District hotel also offers free weekend yoga classes to help you limber up for tackling the hilly geography of Hong Kong Island.

Elsewhere at The Upper House, don’t miss out on the modern European cuisine of the Café Gray Deluxe. This fantastic bistro is a contemporary take on a traditional grand café. It swaggers with glorious views of Victoria Harbour.

This top-rated Central District hotel charms with a complete menu of spectacular amenities and conveniences for the discerning luxury traveller.

Starting at its rooms, the JW Marriott Hotel Hong Kong shows off its lofty position through wide panoramic windows. From your room you’ll soak in spectacular views of Victoria Harbour, the city, and the lush mountains of Hong Kong Island.

Premium extras like Bose audio systems, large flat-screen TVs, and soaker baths give the rooms & suites a feeling of a home-away-from-home in Hong Kong. 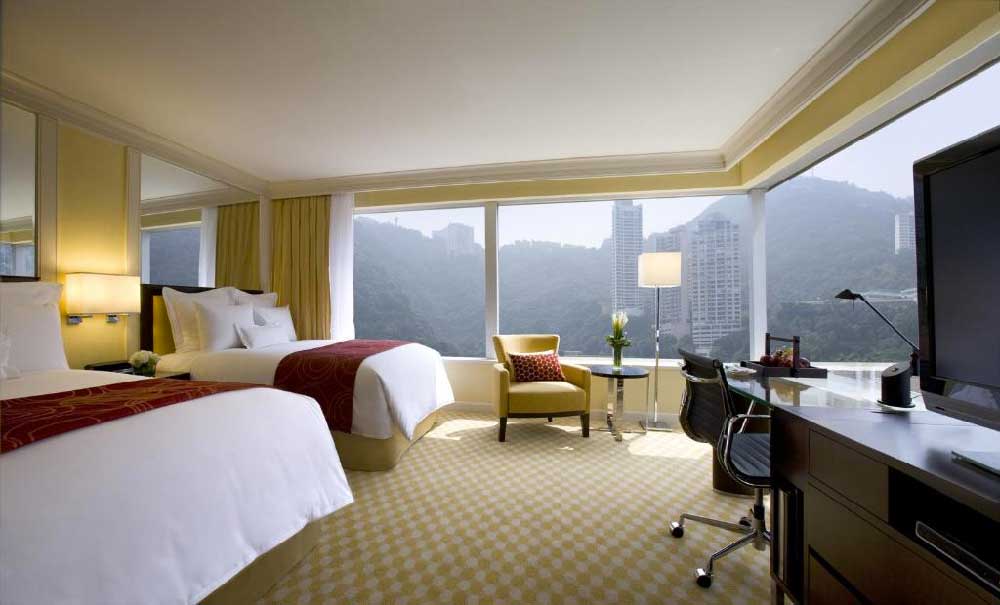 Outside of your room, the JW Marriott Hotel Hong Kong sharpens your escape with a heated outdoor pool. The hotel also offers a Health Club that’s fanatical about your relaxation. The club features a steam room, sauna, and soothing massage treatments to temper your stay.

From its ridiculously lofty perch upon Pacific Place, Island Shangri-La Hong Kong surges forth some of the neighbourhood’s finest views. This is hardly an easy feat considering the formidable competition among the area’s top luxury hotels!

Rooms at this pristine 5-star hotel truly live up to its mystical brand name.

Floor-to-ceiling panoramic windows shine in views of The Peak and Victoria Harbour. The rooms are highlighted by elegant decor that seamlessly fuses classic European grace with Asian sophistication. 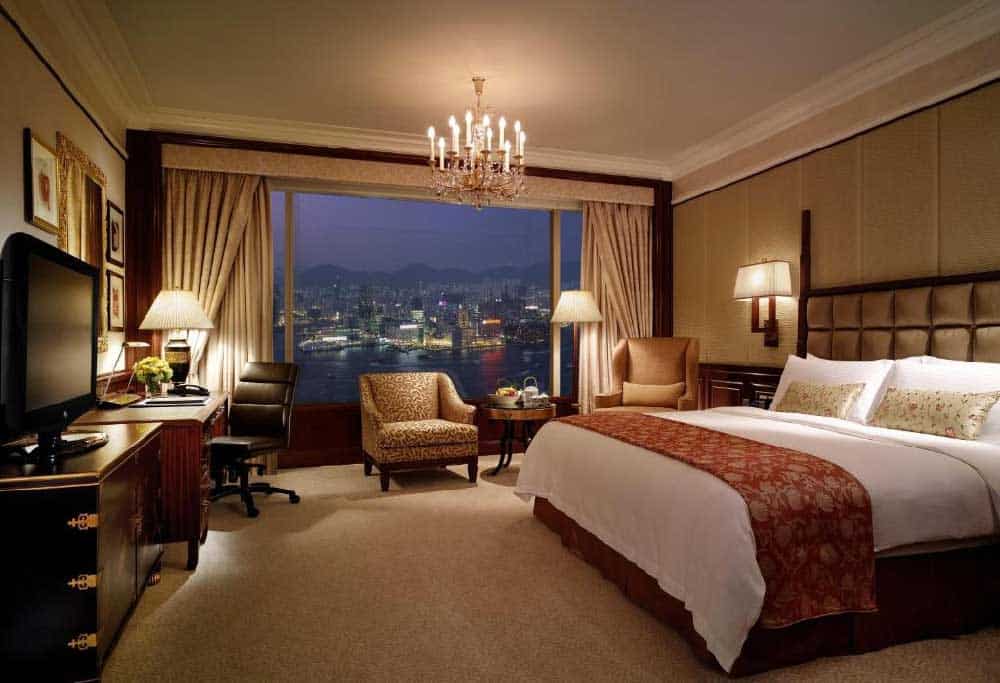 If the chaotic streets of Hong Kong and Central District have left you stressed, batten down in the health club. Here you can take a relaxing dip in the outdoor pool, stretch out with some Hatha Yoga or unknot with a calming massage.

For a quiet evening in, let the Island Shangri-La Hong Kong take your tastebuds on an adventure.

Surrounded by the giants of the Hong Kong luxury accommodations scene, the mid-range Butterfly on Wellington Boutique Hotel is a fantastic option for those attracted to Central District’s prime location if not its lofty price tags.

Rooms at this 3.5-star boutique hotel are sparked with a colourful modern Asian simplicity that doesn’t skimp out.

At Butterfly on Wellington Boutique Hotel, you’ll enjoy extra value-added amenities. None is more practical than the free 4G Pocket WiFi device for roaming around the city during your stay. 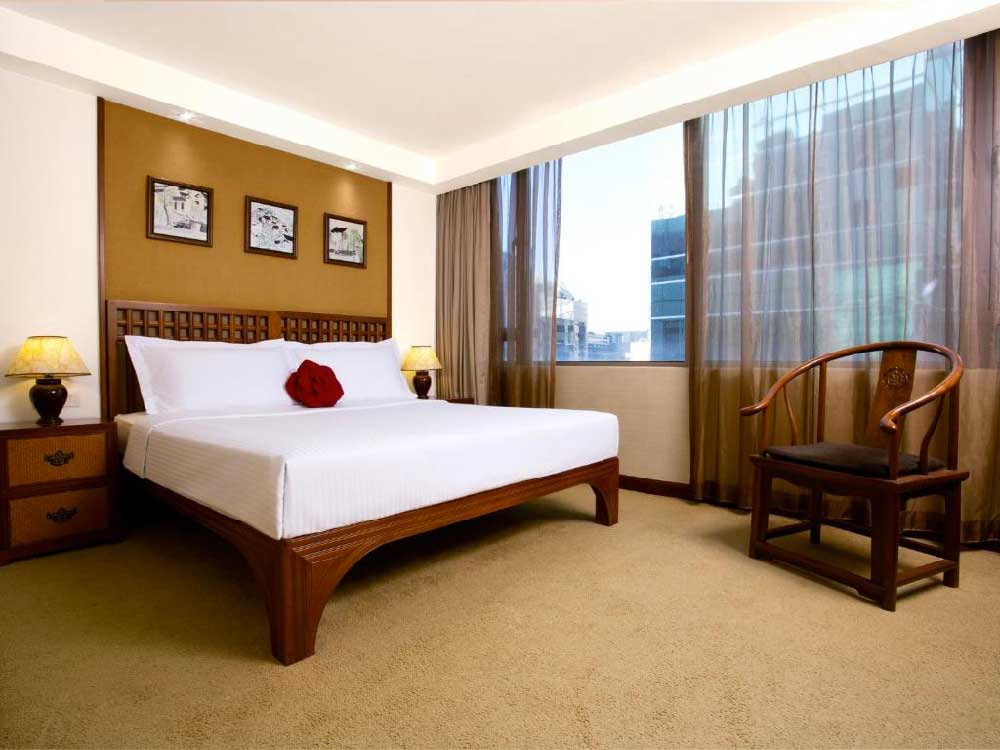 Perhaps best of all at this top Central District hotel is the location.

Also less than 10-minutes by foot from The Butterfly on Wellington is the historic Lan Kwai Fong. This warren of staircases and narrow alleyways hides some of the area’s best bars & restaurants.

As one of the best Central District hotels, each room at Conrad Hong Kong is meticulously crafted with elegant contemporary decor. The highlight here is the marble-laden bathrooms with soaker tubs for your relaxation. 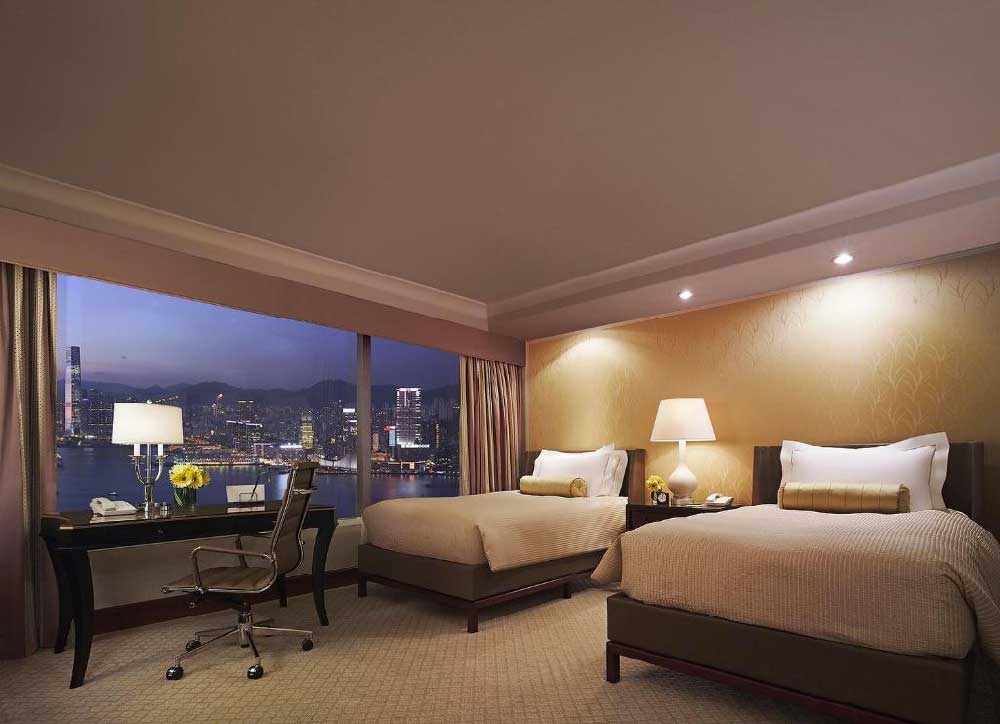 Other than enjoying the views from your room, Conrad Hong Kong assembles a dream team of dining options that cater to every taste.

From the award-winning Italian fine dining of Nicholini’s to the modern Cantonese of Golden Leaf to the poolside skyline views of Garden Café and more, your tastebuds are bound to find new love at the Conrad Hong Kong.

Summary: The best places to stay in Central District