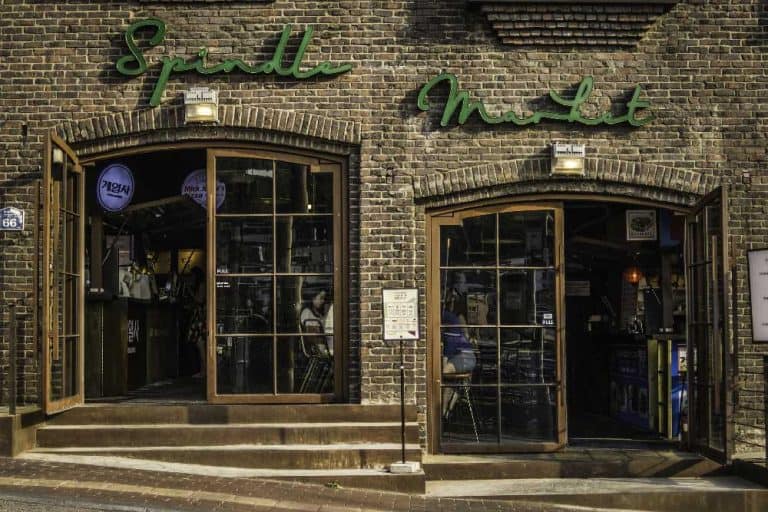 Among all the neighbourhoods in Seoul, there’s none more popular among foreigners than Itaewon. While this small neighbourhood won’t provide much of a glimpse into Korean culture, its diverse palette of international flavours & cultures solidifies Seoul standing as a top global cosmopolitan city.

Many first time visitors to Korea, stumped on where to stay in Seoul, will find themselves most at home in the foreigner-friendly streets of Itaewon.

Not sure where to start looking? The following guide to the best hotels in Itaewon will help you get your Seoul accommodations search off to a flying start!

Why stay in Itaewon?

There’s no place in Seoul with as storied a reputation as Itaewon. With the American military headquarters situated at the nearby Yongsan Garrison, Itaewon’s got a long history of catering to foreigners living in Korea.

The result: Itaewon’s become a highly diverse neighbourhood that’s among the best options for where to stay in Seoul.

There’s a good side and bad side to that. On the one hand, Itaewon is one of the easiest introductions to Seoul for visitors. Getting around with just English (or even Japanese) isn’t as difficult as elsewhere in the city. And since Itaewon’s so popular with expats and other foreigners, you’ll never be alone in looking for a travel companion who speaks your language. 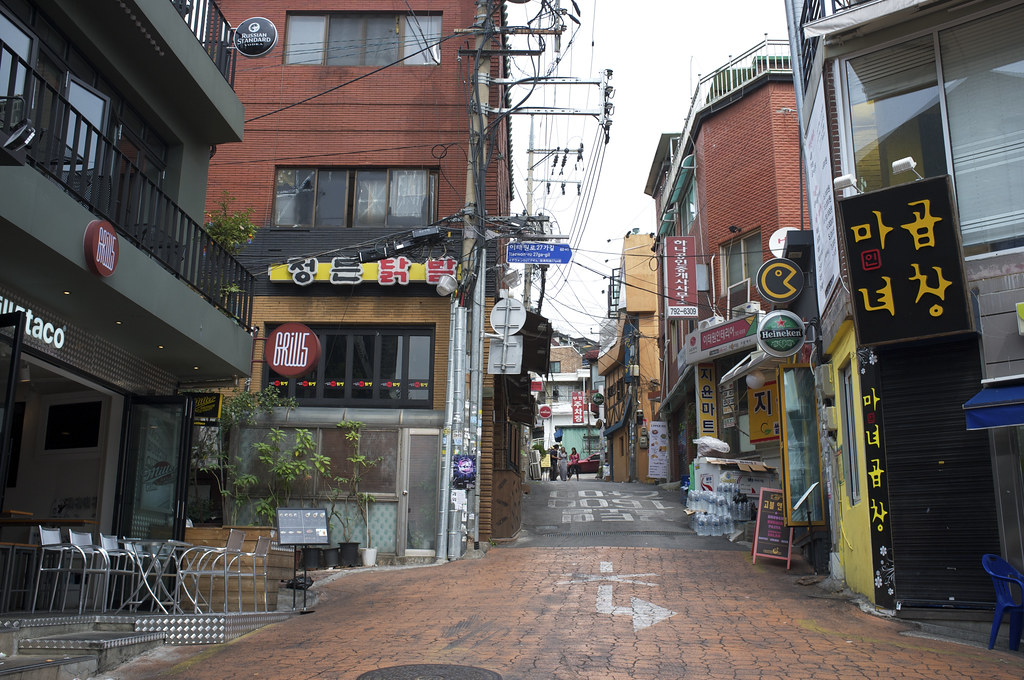 On the other hand, Itaewon is one of the least representative neighbourhoods of Seoul as a whole. If you stick to the Itaewon accommodations bubble, you’re unlikely to experience what the city’s all about. To dig into many of the best things to do in Seoul, you’ll need to hop elsewhere.

It’s also one of Seoul’s edgier and grittier corners, not necessarily the type of place that bestows an excellent reputation on the city (although that’s changing quickly as more upscale restaurants & bars mosey on in). 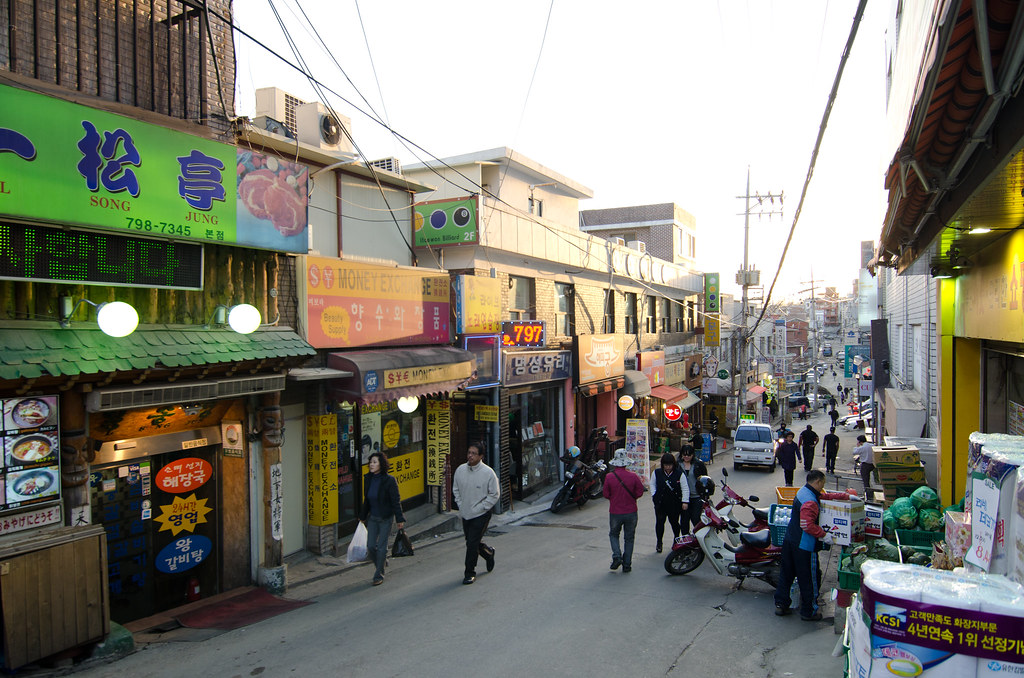 That said, Itaewon is not a place where you’ll ever get bored. The district’s a fantastic shopping destination, featuring world-renowned brands. On top of that, Itaewon’s a wonderful place to feed your appetite. The area’s restaurants cater to any taste. You’ll find cuisines from all over the world here—Turkish, Mexican, American, South African, Thai, Indian etc.—in additional to the usual Korean favourites.

And for getting a little rowdy, there aren’t many places in Seoul that rival Itaewon. In Itaewon, you’ll get face-to-face with some of the best nightlife in Seoul including the city’s most LGBT-friendly venues.

Where to stay in Itaewon: A guide to the best hotels in Itaewon (Seoul, Korea)

With Itaewon’s popularity among expats and penchant for drawing in a younger crowd, it’s hardly a surprise that much of the Itaewon accommodations market focuses on the budget-end of the spectrum. You won’t find a whole lot of high-quality mid-range or luxury hotels in Itaewon. For better 4- and 5-star choices, you’d be better served around Myeongdong in Jung-gu or in Gangnam.

Celebrating its 45th anniversary in 2018, the legendary Hamilton Hotel continues to be one of the best places to stay in Itaewon year after year. The hotel’s distinctive functionalist brown brick architecture, while hardly as inspiring as the likes of the nearby Grand Hyatt Seoul, remains one of the the most recognizable faces of Itaewon’s post-war skyline. 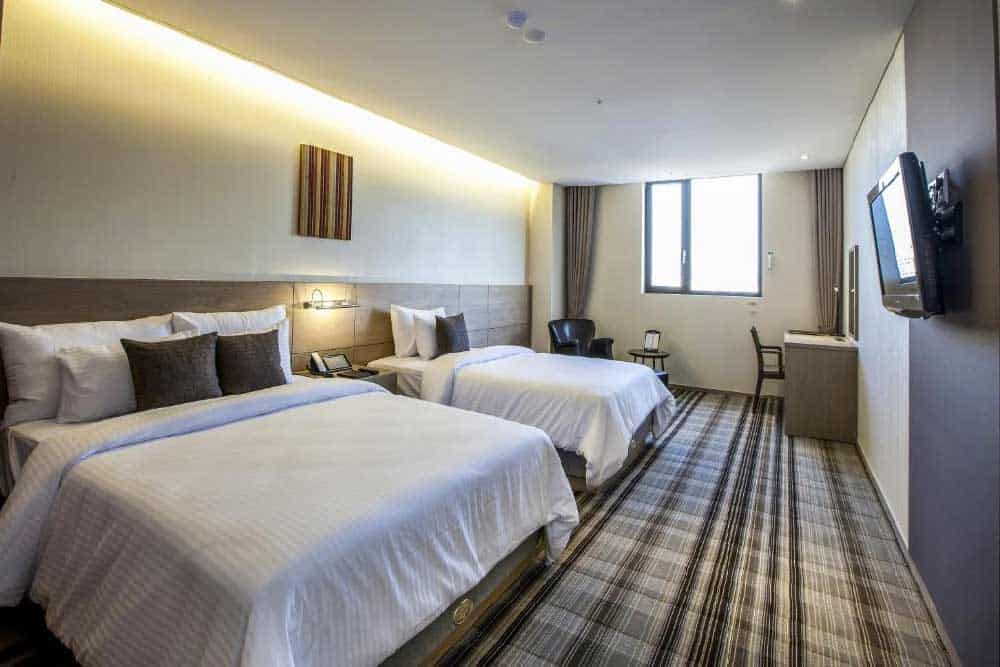 Beyond the clean and newly-renovated rooms, what makes the Hamilton Hotel so special is its facilities. For guests wanting to spend their evenings relaxing, there’s a seasonal rooftop pool and a sauna for sweating out the soju. A fitness centre also joins the health and wellness trio, offering a large selection of resistance and cardio machines for guests.

Itaewon’s popularity as a diverse Seoul dining destination also drifts into the massive Hamilton Hotel block where you’ll find a handful of excellent restaurants to tackle your cravings. Among the best are the Korean BBQ goodness of Maple Tree House and the delectable American-style Chinese of Ho Lee Chow.

From inside to out, the ultra-funky Imperial Palace Boutique Hotel stands out among the best hotels in Itaewon as the most energetic of the bunch. Nearly everywhere you wander in this hotel you’re met by a splash of colour or an unique design frill, ranging from the hanging swings and travel-trunk wall of the lobby to the pop-art-inspired murals in the room. 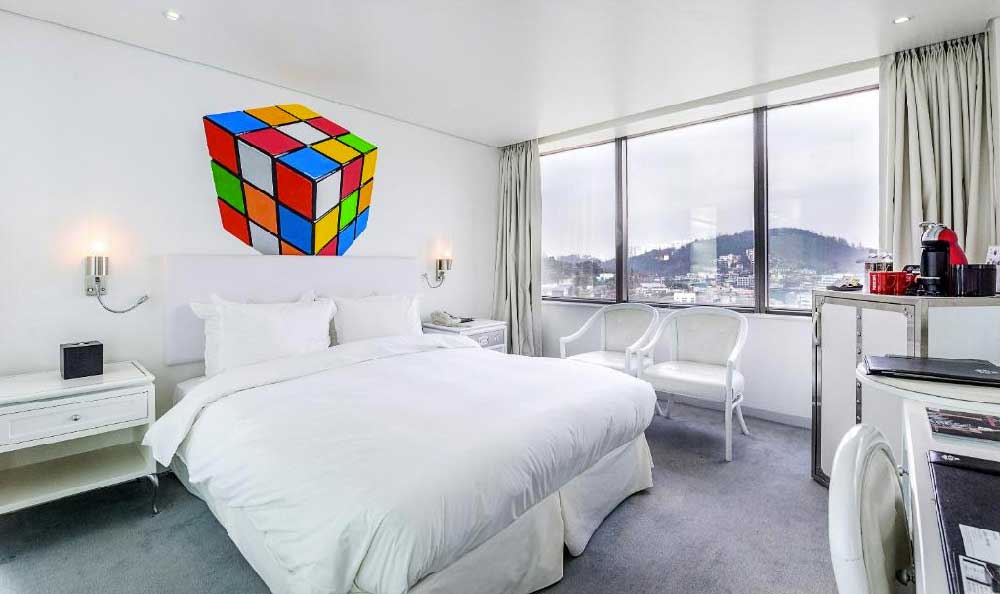 Besides the quirky, comfortable rooms with delightfully modern bathrooms, the Imperial Palace Boutique Hotel occupies a near-perfect location in Itaewon. The district’s main subway station, Itaewon Station, is three minutes away by foot. The whole area around the hotel also teems with bars, restaurants & shops should you want to indulge in some of Itaewon’s finest pleasures.

If you’re looking for Itaewon accommodations with a more personal touch, the Juniper Garden Guest House is your ticket. Located in a quiet residential corner of Itaewon, these tidy apartments present a different side to Seoul’s most notorious district. 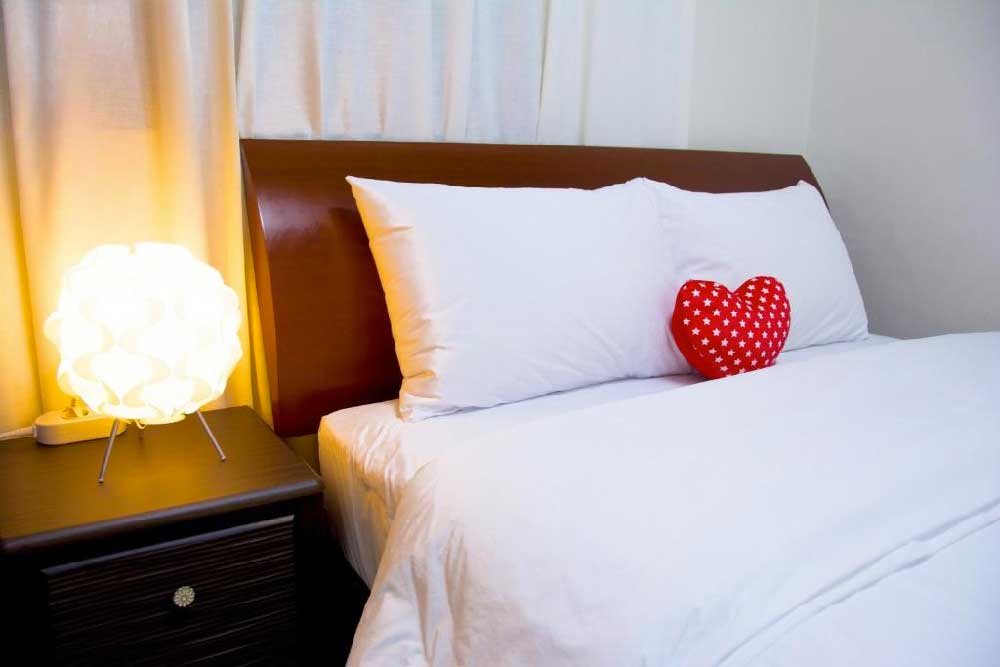 Each unit at Juniper Garden Guest House is self-contained, featuring a kitchen, private bathroom and sitting/dining areas. Some of the bigger apartments even contain a balcony for getting some fresh air and chilling out to the sounds of the city. For budget-minded travellers, especially those travelling as a family or a group, there’s hardly a better option in Itaewon.

Itaewon A One Hotel

Hip modern stylings breeze through the Itaewon A One Hotel, one of the best budget-friendly hotels in Itaewon. This newer family-run property impresses with large comfortable rooms and an attentive staff who go out of their way to attend to your travel needs. 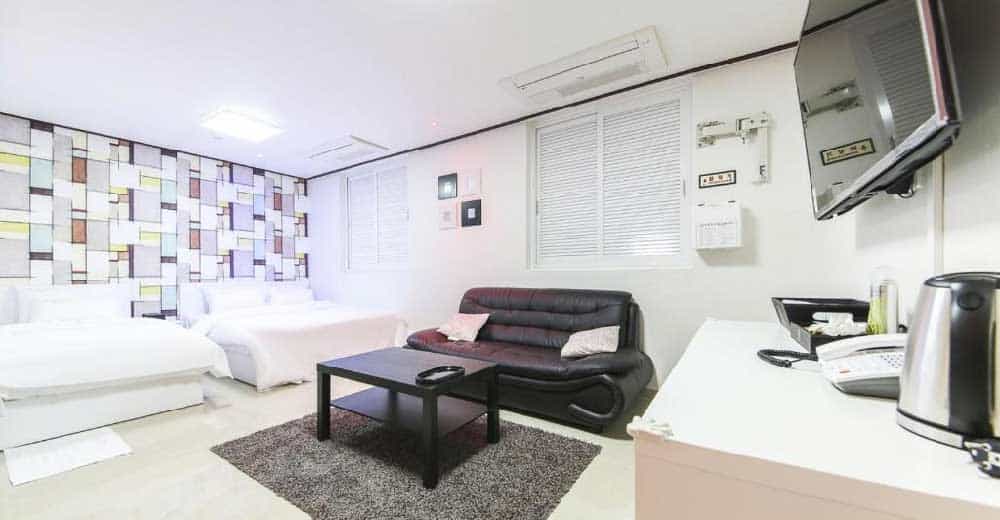 Besides the rooms, what really draws travellers to Itaewon A One Hotel is the location. The main drag of Itaewon is steps away yet far enough that the bulk of the noise from the area’s famous rowdy crowds is shut out. To zip around Seoul, Itaewon Station is just 200 metres from the hotel.

Book Itaewon A One Hotel

For the ultimate in luxury when choosing where to stay in Itaewon, there’s only one choice worth uttering: Grand Hyatt Seoul. Like its sister properties elsewhere in East Asia, Grand Hyatt Seoul is one of the best 5-star hotels in Seoul, doling out everything you’d ever want for your stay.

The amenity-rich rooms at the Grand Hyatt Seoul stun with incredible views of the city and Namsan through wide picture windows, whether you’ve chosen a standard or deluxe room. The real kicker though is what you’ll find elsewhere on the property. 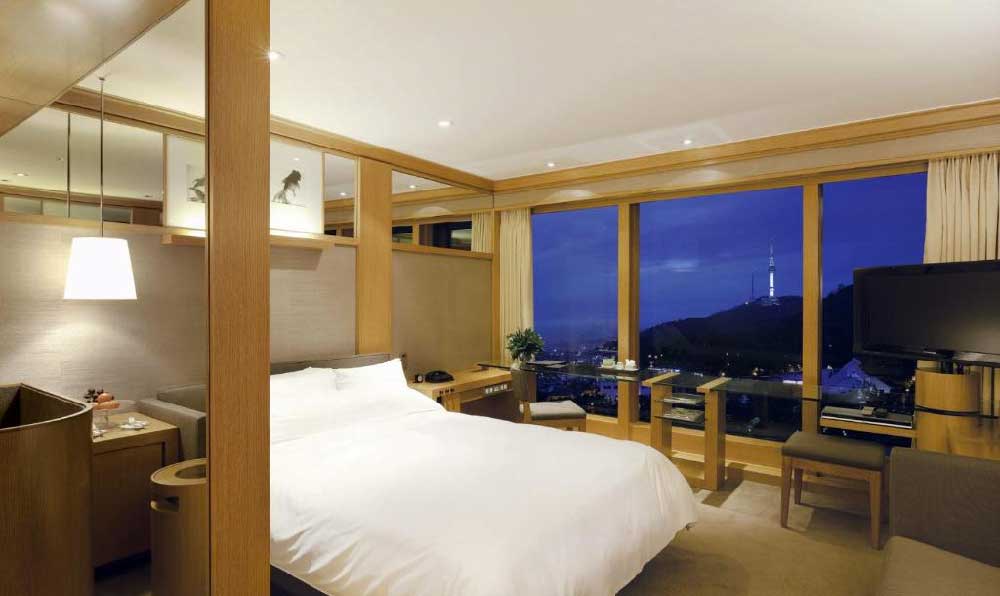 Set in the shadow of Namsan, the Grand Hyatt Seoul is surrounded by a gorgeous nature preserve that flaunts its beauty at every turn. In winter, an ice skating rink adds a little romance to your trip while the summertime sees an outdoor pool provide respite from the heat & dense humidity of Seoul.

Elsewhere at the Grand Hyatt Seoul, world-class fitness & wellness facilities await. Get your game face on at one of the three on-site tennis courts, two squash courts, and fitness centre. For a more relaxing day, chill out at the sauna or spa, letting go of your frustrations with a traditional Korean massage and some aromatherapy.

When you’re looking for where to stay in Itaewon on a budget, Xeromine Guesthouse Itaewon is one of the district’s best choices. Nestled slightly away from the main street yet within minutes of Itaewon Station, this small guesthouse is perfect situated to take on the area with full gusto. 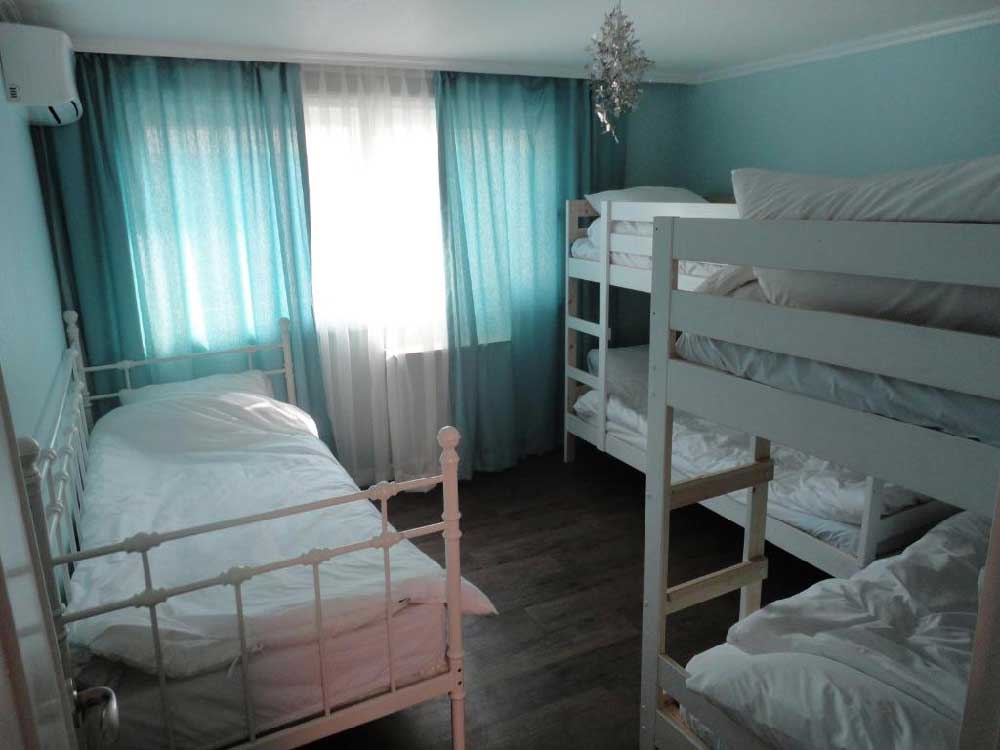 The rooms at Xeromine Guesthouse Itaewon are clean and cosy, offering everything you need for a comfortable stay without any frills that you don’t. Extras like air conditioning to cool you down in the dead heat of summer and heating to keep you toasty during the cold Korean winter add value to these budget-friendly accommodations. All facilities here are shared between guests including the kitchen and bathrooms.

As simple as Itaewon accommodations come, the budget-friendly Amazon Guesthouse is a superb choice for single travellers and families looking to save money on their room. Although you shouldn’t expect many frills here, rooms are clean & comfortable and include use of the shared kitchen and a large terrace overlooking Yongsan. 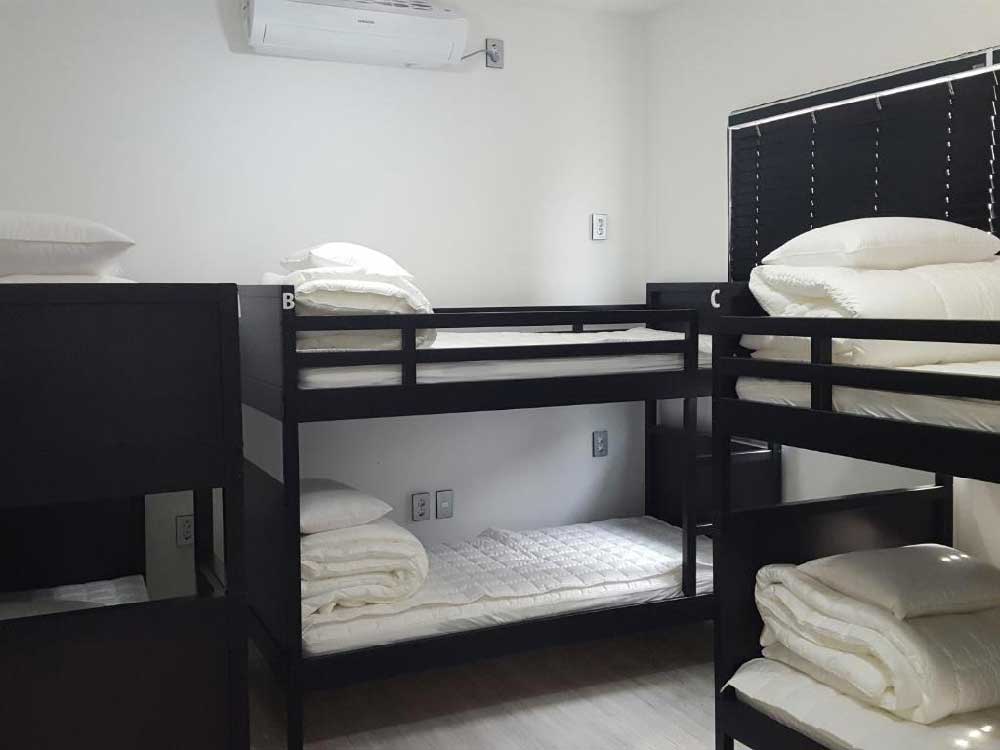 Best of all, though, is the location. Amazon Guesthouse is central, just a couple blocks southwest of Itaewon Station and a mere five minute walk. And with some of the area’s best restaurants and trendiest bars at your fingertips, there’ll never be a dull moment if you decide to choose this guesthouse as your temporary Seoul home.

Summary: The best places to stay in Itaewon (Seoul, Korea)

Still can’t decide where to stay in Itaewon? Here are a couple last-minute suggestions for the best hotels in Itaewon:

Need alternatives to these Itaewon accommodations? Check out these other top Seoul districts…