Comparing the best hotels in Namba is a great way to start planning your trip to Osaka. After you choose your accommodations in Namba, you should find it easier to plan the rest of your itinerary.

If you’re trying to decide where to stay in Osaka, Namba is a top choice. It’s one of the main commercial centres in Osaka, meaning there’s always plenty to see and do. Various cultural sites remain hidden between streets full of restaurants, stores, and markets. For those looking to have some fun when the sun goes down, Namba also offers a vibrant nightlife scene.

Not sure where to search? Start looking for Namba accommodations with this guide to the best places to stay in Namba…

Where to stay in Namba: Top hotels & best places to stay

The five-star accommodations at Swissotel Nankai Osaka stand out for their city views, luxury rooms, and convenient access to the top attractions in the area. It’s located above Namba Station in the heart of the district, making it the most central hotel in Namba. 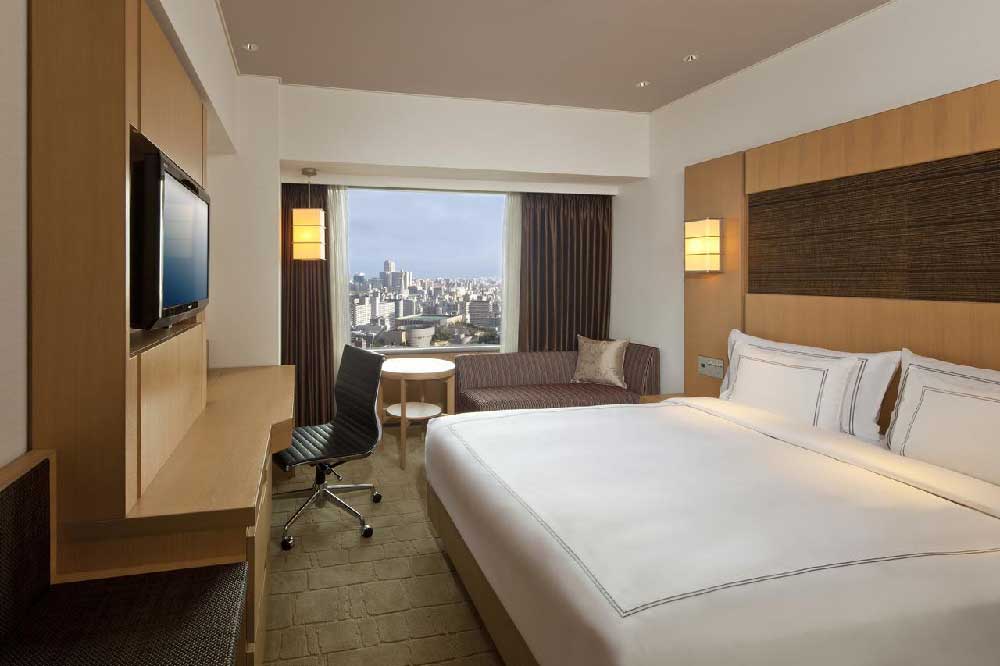 Located in a high-rise building, the luxurious Swissotel Nankai Osaka has rooms that overlook the streets of the district. You can also enjoy the panoramic view from the on-site restaurant on the 36th floor serving local dishes and Mediterranean cuisine with live music.

As this hotel is within walking distance of the top things to see & do in Namba, it often runs out of vacancies early in the season. Book early if you want to stay in the centre of Namba.

Connected directly to Namba Station, the four-star Hotel Monterey Grasmere Osaka places you close to the action. It’s near the eastern end of the station, a short walk from Dotonbori Shopping Street. It’s also connected to Osaka City Air Terminal with direct shuttles to the airport. 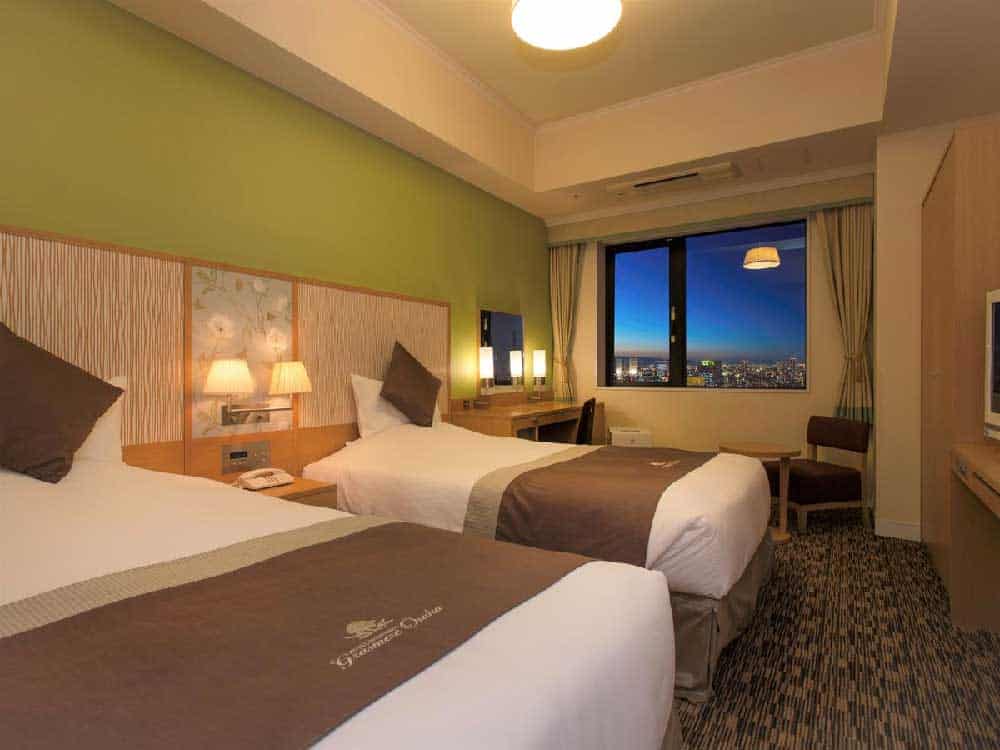 Along with a great location, staying at Hotel Monterey Grasmere Osaka provides access to great food options. With four on-site restaurants, you have a variety of choices for dinner. Enjoy fine dining at the French restaurant with antique furniture or try Japanese cuisine at Kobe. If you don’t want to wait for food, the hotel has vending machines with snacks and beverages.

The rooms are a little small but comfortable. They feature neutral colours and modern furnishings to create an inviting atmosphere and a peaceful place to sleep. Depending on the room you choose, you may even get a view of the city.

Located a short walk from the Glico Man Sign, the highly-rated Hiyori Hotel Osaka Namba Station is another option for those who want to stay near the centre of Namba. It’s a four-star Namba hotel with direct access to Namba Station and Namba City Shopping Mall. 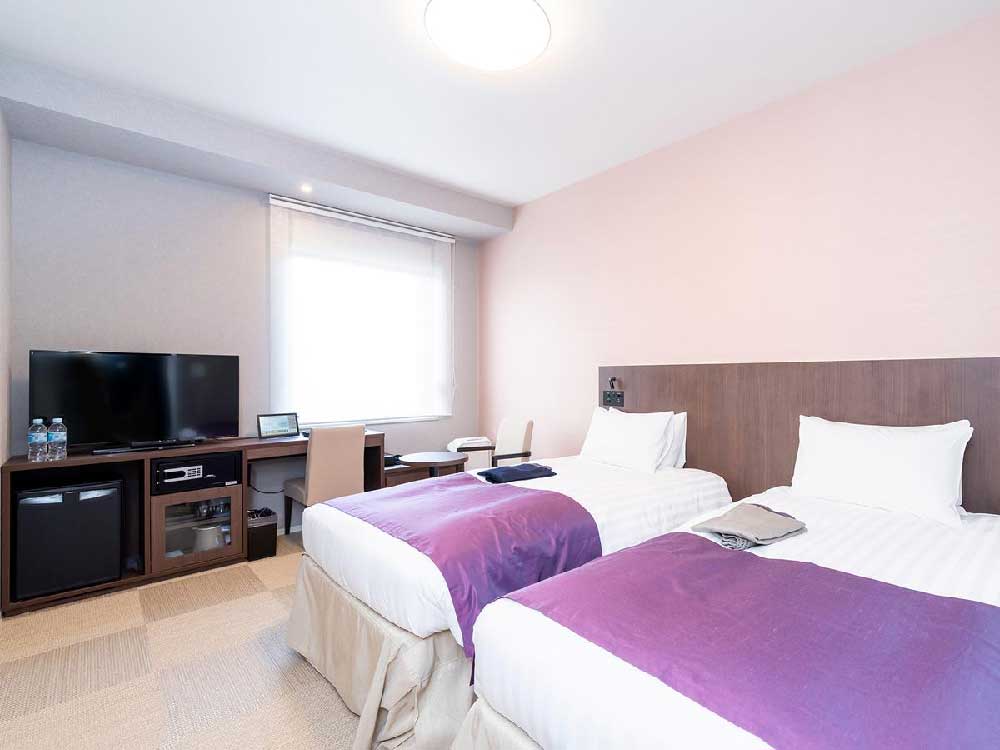 The rooms at Hiyori Hotel Osaka Namba Station are soundproof to help you get some rest after a long day of sightseeing. The modern accommodations feature bright colours and all the standard amenities, including a desk and tea kettle.

Before you start your day, you can fill up at the breakfast buffet. For lunch or dinner, try the European cuisine at the on-site restaurant. When you’re ready to explore, Namba Station is just outside the front doors. You can reach almost any site in the district within a few minutes.

The modern furnishings inside Cross Hotel Osaka stand out compared to the more traditional atmosphere at other Namba hotels. It’s a stylish place with a sleek, minimalist interior design. The rooms also come with a fridge, air purifier, and a complimentary bottle of water. 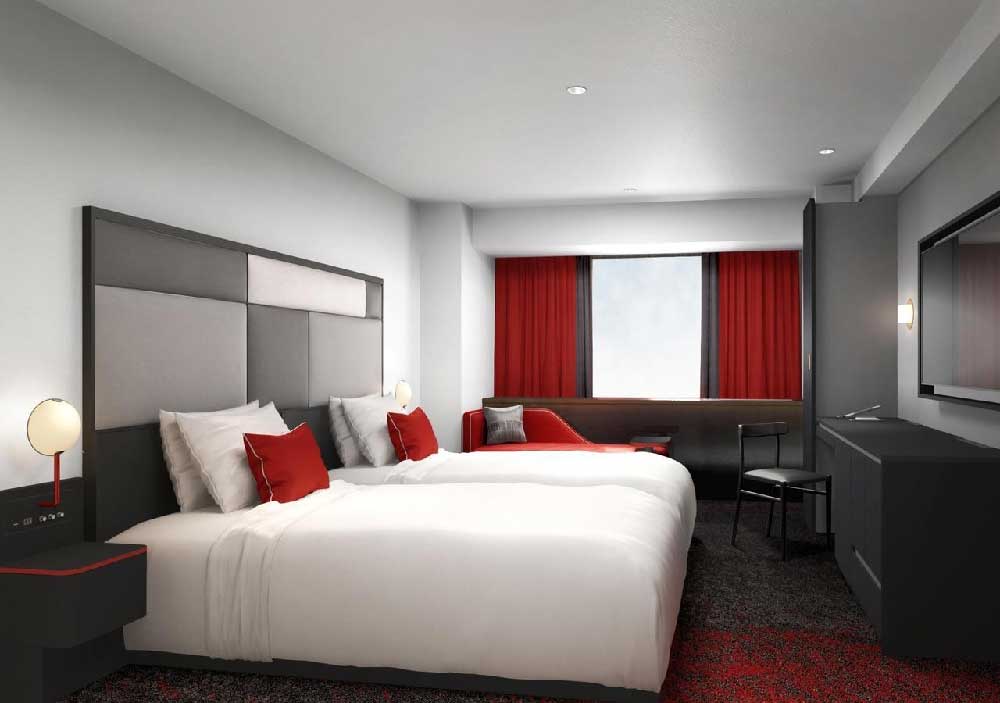 Along with relaxing accommodations, Cross Hotel Osaka offers helpful staff and quick access to public transportation. If you need help finding attractions or need dining recommendations, just ask the staff. To reach nearby destinations, you can hop on the nearby subway.

While this hotel is further from some of the top attractions, it’s a few minutes from America-mura Village. You can quickly reach the eclectic tourist destination with its gaudy architecture and American-themed shops. The surrounding area also includes many markets, cafes, and restaurants. For live music, visit Rug Time Osaka located next door to the hotel.

If you want to avoid the crowded parts of Namba, the rooms at Centurion Hotel CEN Osaka Namba may meet your needs. The hotel is on a quiet side street about a three-minute walk from Motomachinaka Park. 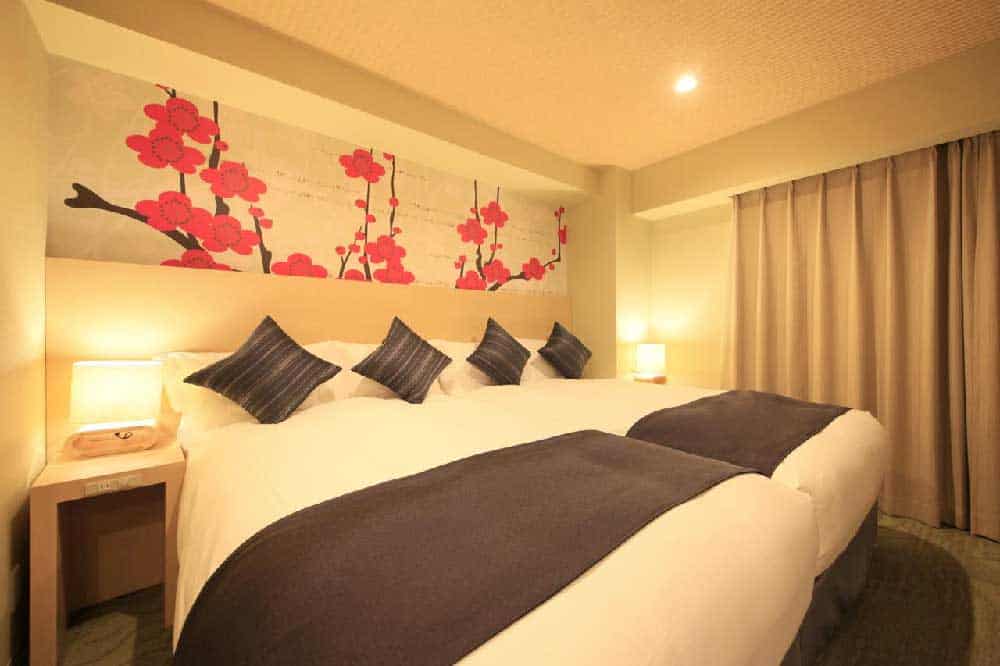 While many of the top hotels in Namba are connected to Namba Station, the three-star Centurion Hotel CEN Osaka Namba is in a separate building. Along with quiet rooms, the accommodations come with a wide range of amenities to help you feel at home. Each room has a fridge, teapot, and desk. You’ll even find a bidet in the bathroom. The rooms are a little small but brightly lit and carefully arranged to maximize the space.

The quiet hotel isn’t too far from the top attractions. It’s just a few blocks from the main shopping complexes and sites. The hotel is a short walk from Shiokusa Park and Kamomecho Park, providing two more options for getting away from the crowds.

The three-star Sotetsu Fresa Inn Osaka Namba is a hotel that mostly caters to business travellers, providing modest accommodations at affordable prices. When you enter the barren lobby, you’re greeted by a row of computers. The computers allow guests to check-in and check out without interacting with hotel staff. 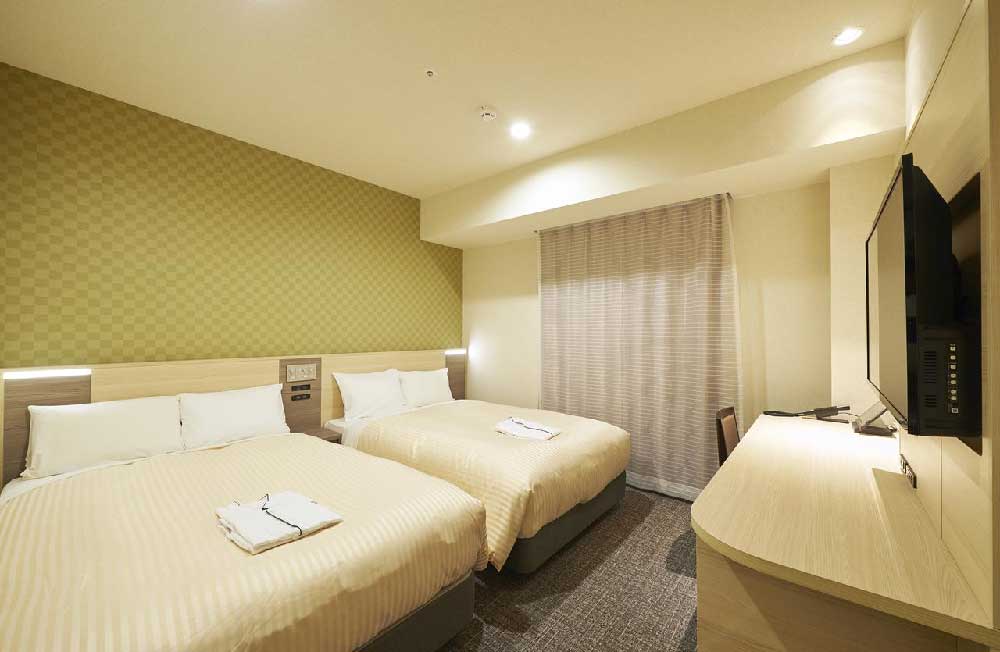 The modern features at Sotetsu Fresa inn Osaka Namba help this hotel stand out. The rooms are also well equipped with almost every amenity imaginable. You get a fridge, desk, slippers, electric kettle, and more. Some of the rooms also offer views of the city but you won’t see a lot due to the location of the hotel.

Choosing where to stay in Namba isn’t easy when you want to get away from noisy parts of the district. Luckily, this hotel provides a peaceful setting without placing you too far from the main attractions. One of the Namba Station entrances is just outside the hotel.