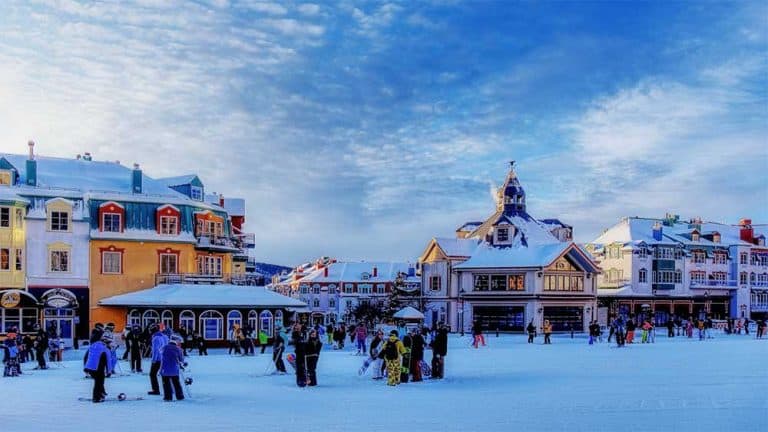 If you’re planning to visit Canada in winter, throw some adrenaline-pumping action into the mix by carving the slopes at one of the best ski resorts in Canada.

From the Coast Mountains and Rocky Mountains of British Columbia to The Laurentians in Quebec, there’s a wide range of awesome places to go ski in Canada for skiers & snowboarders of every skill level.

Ready to plan the ultimate ski vacation in Canada? Find the perfect escape for your trip with this guide to the top Canadian ski resorts and best places to go skiing in Canada…

Looking for more ideas for your trip? Check out our guide for where to go in Canada for more recommendations on when to visit, where to go & what to do!

Best places to ski in Canada

If there’s any single Canadian ski resort you need to add to your Canada itinerary, it’s Whistler Blackcomb.

Located in the small British Columbia resort town of Whistler, about 90 minutes north of Vancouver along the Sea-to-Sky Highway in the Coast Mountains, Whistler Blackcomb is not just one of the best ski resorts in Canada but the largest ski resort in North America. 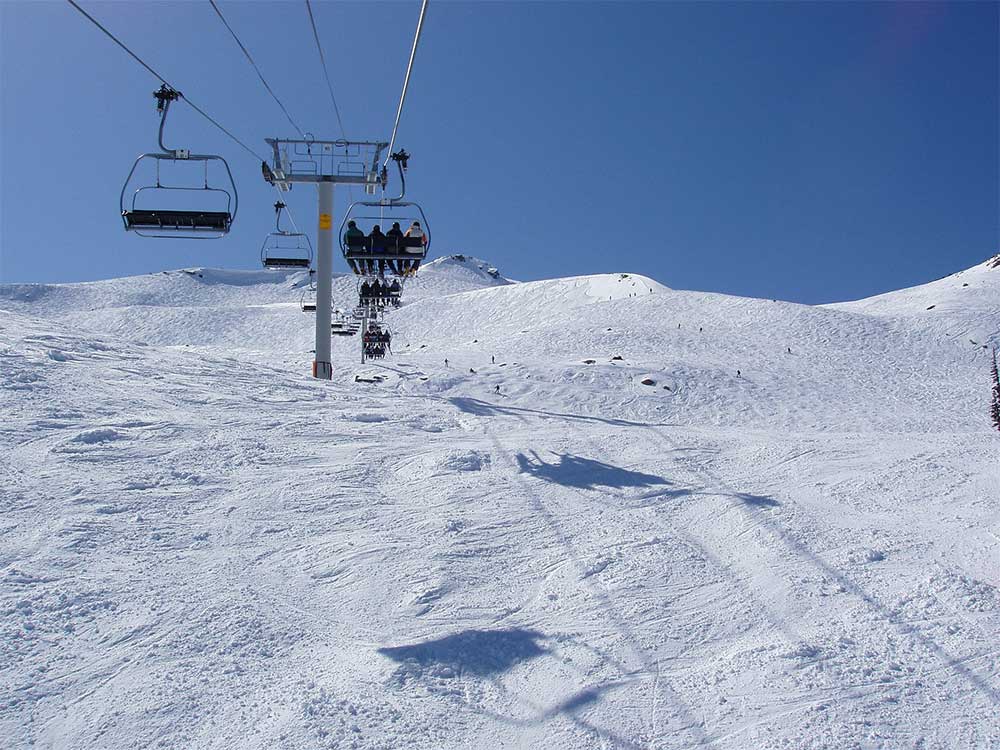 Sprawling between Whistler Mountain and Blackcomb Mountain, the resort features about 200 runs along 8,171 acres of skiable terrain that’s suitable for every level of skier & snowboarder from beginners to world-class Olympic hopefuls. There’s also five terrain parks and 16 alpine bowls here to add some vertical action into your ski vacation.

After you’ve finished with a day of skiing, be sure to carve out some time for some après-ski fun and nightlife in Whistler Village. The village is home to a ton of great restaurants & bars along with some the best hotels in Whistler.

Located within Banff National Park in the Canadian Rockies, Lake Louise Ski Resort is, along with Whistler, one of the best places to ski in Canada.

While the area is perhaps more famous for its namesake lake, one of the best things to do when visiting Lake Louise is to go skiing at this massive resort. With about 4,200 acres of skiable terrain and 145 runs, you won’t experience a single moment of boredom if you choose to ski here during your Canadian winter adventure. 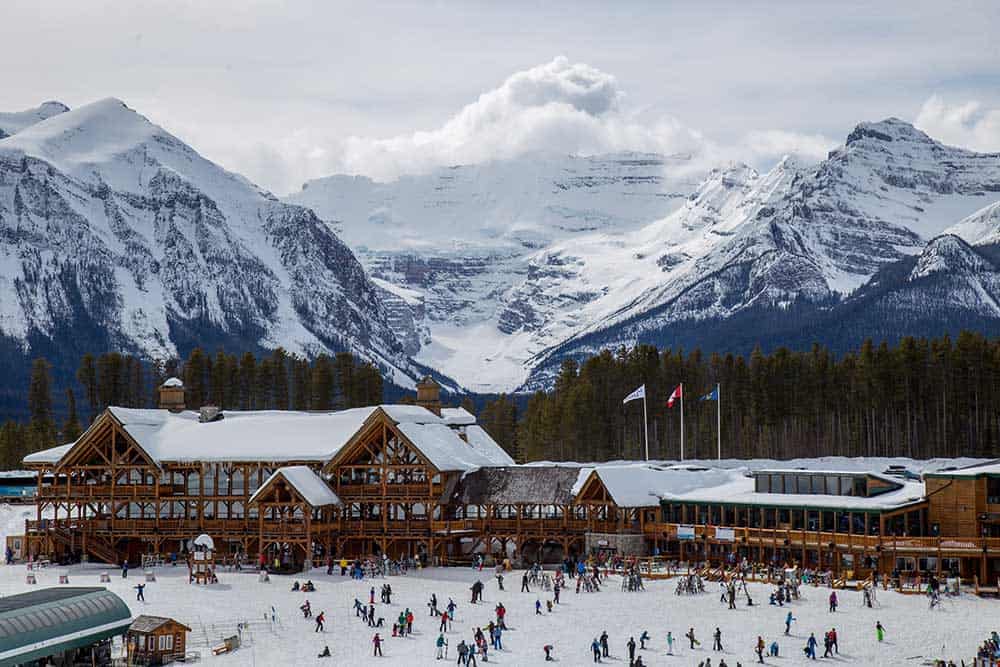 On top of its wide array of runs, the views here are, arguably, some of the best in Canada. As you ride along the pistes, you’ll witness magical panoramic vistas of the Bow Valley and Canadian Rockies including Lake Louise itself and the Fairmont Chateau Lake Louise, one of Canada’s most famous luxury hotels and one of our top picks for where to stay in Lake Louise.

Located just 15 minutes from Banff, Sunshine Village is the most accessible of the SkiBig3 resorts in Banff & Lake Louise and one of Canada’s best.

Although there’s 3,300 acres of skiable terrain at Sunshine Village catering to every skill level, the biggest reason skiers flock here is for its extended ski season, which is one of the longest in North America.

Perched at the 7,200-foot elevation level, the resort gets plenty of natural powdery snow and is open from November until as late in the spring as late May! 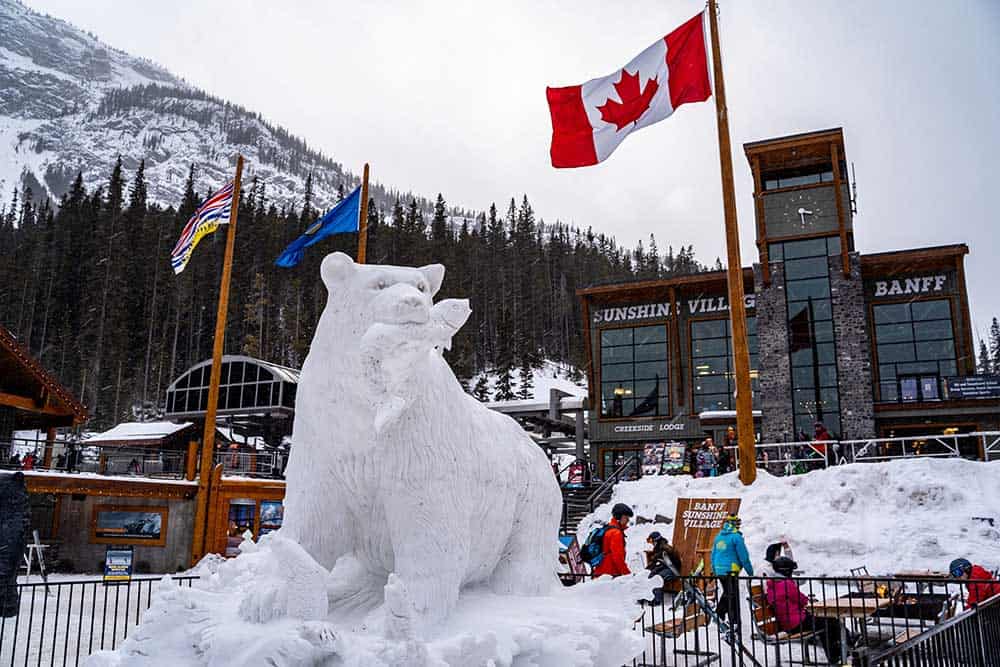 While most visitors opt to grab a hotel room in Banff, Sunshine Village is home to the only ski-in/ski-out lodge in Banff National Park. Book up early to snag a room at Sunshine Mountain Lodge to get the most out of your Banff skiing vacation.

Located close to the city of Kelowna in British Columbia’s beautiful Okanagan Valley, Big White Ski Resort is well known locally and nationally for its family-friendly terrain and sweeping views over the Monashee Mountains.

The resort offers 16 lifts to transport you across over 2,700 acres of terrain criss-crossed by over 100 kilometres of runs that cater to everyone from beginners to X-Games-caliber experts. 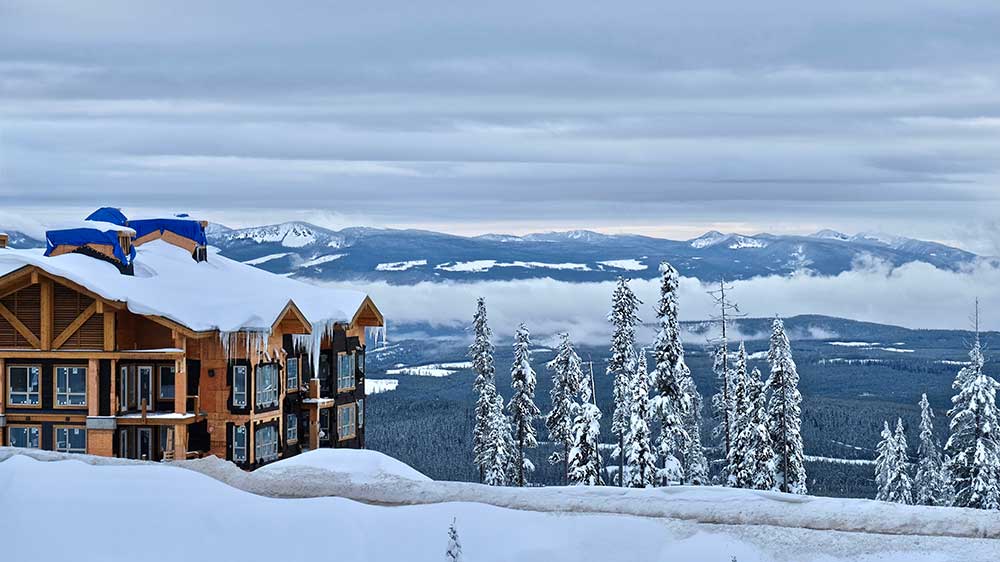 Among all of these top Canadian ski resorts, Big White Ski Resort is among the best choices for families. On top of the beginner-friendly powdery snow, most of the accommodations here are ski-in/ski-out, making it super convenient to rest and fuel up with the kids during a mid-day break.

There’s also a handful of great activities at Big White for non-skiers including snowshoeing, tubing/sledding, and skating.

Although it’s lesser-known even among Canadians, Sun Peaks Ski Resort is the second-largest ski area in Canada, trumped only by Whistler Blackcomb. It’s got 4,270 acres of skiable terrain sprawling out over three mountains: Mount Tod, Sundance Mountain, and Mount Morrisey.

As you’d imagine with its immense size, the resort’s 137 runs cater to all skill levels. Almost 60% of the runs, however, are best suited for intermediate skiers & snowboarders. Another third of the slopes at Sun Peaks, including steeps and tree skiing, are better left to experts. (Don’t say we didn’t warn you!)

While you’ll find excellent ski-in/ski-out accommodation at the small resort village at the base of the mountains, many visitors chose, instead, to stay in Kamloops, located about 45 minutes away.

Located in the interior of British Columbia near Rossland, the off-the-beaten-track Red Mountain Resort is a favourite for intrepid skiers looking to escape the crowds.

Spread out over two mountains, the 4,200 acres of terrain here offers a wide array of runs. While you’ll find a few runs suited towards beginner and intermediate skiers, many are geared towards more advanced skiers & snowboarders.

The biggest bonus of skiing at Red Mountain Resort is avoiding the crowds of other top skiing resorts in Western Canada.

Buried in the interior of southern British Columbia, the uncrowded resort is about a 4-hour drive away from the nearest major city (Kelowna) along highways with conditions that are anything but predictable during winter.

More popular among locals than internationally, Kicking Horse Mountain Resort is an easily-accessible top ski resort wedged between Glacier National Park of Canada and Yoho National Park just 15 minutes outside of the town of Golden, B.C. 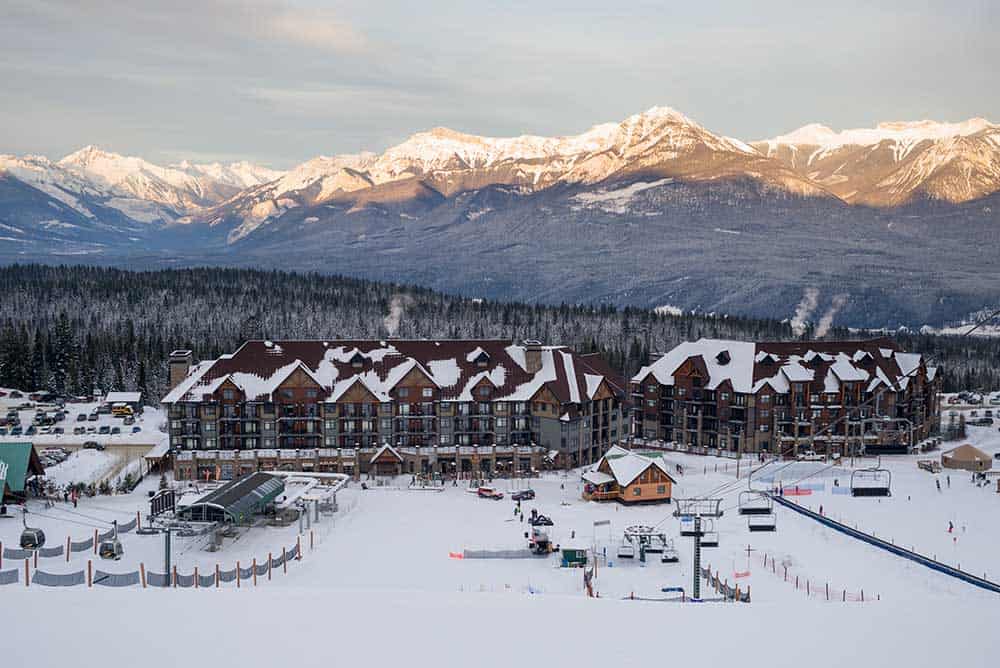 Like other top-rated ski resorts in Canada, Kicking Horse Mountain Resort spreads out over vast terrain, measuring over 3,486 acres with a 1,315-metre vertical drop. Its immense size places it as the sixth-biggest ski area in North America!

Within the resort’s 129 runs, there’s quite a mix of trails for beginner, intermediate, and advanced skiers. Thanks to its north-facing mountain, the snow conditions at Kicking Horse are also among the best in the country for skiing & snowboarding.

One of Canada’s newest ski resorts, Revelstoke Mountain Resort has taken full advantage of its prime location on the slopes Mount Mackenzie to carve out a name for itself in the region and in the world ski scene. 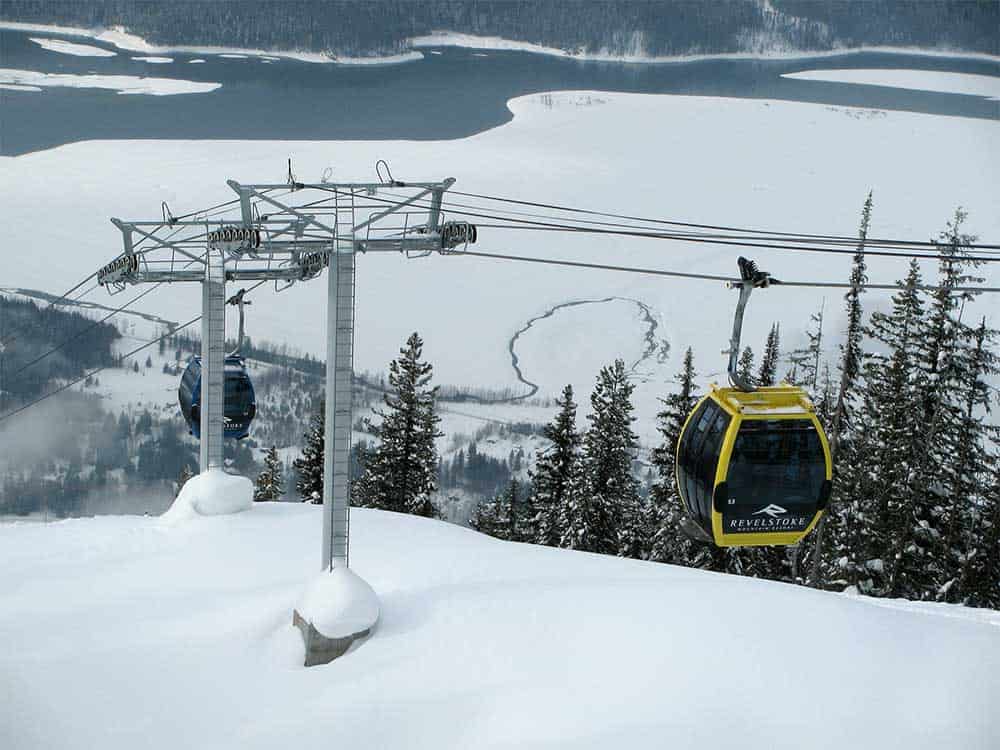 Although you’ll only find 40 designated trails with the 3,031 acres of skiable terrain here, the future for Revelstoke Mountain Resort is bright. Plans are underway to extend its ski area to a whopping 10,000 acres to place it as the sole heir to the throne of largest ski resort in North America.

Even without its ambitious expansion plans, Revelstoke is famous among the world’s most adventurous expert skiers for its seemingly endless 500,000 acres of off-piste cat-skiing and heli-skiing terrain.

Although Ontario is not as well-known for its ski resorts as the provinces of Western Canada, there’s one exception to the rule: Blue Mountain Resort in Collingwood.

Surprisingly enough, Blue Mountain Resort is the third-busiest ski resort in Canada, selling nearly 750,000 lift tickets per year. (This probably has more to do with its location just two hours northeast of Toronto, Canada’s most populated city, than the runs themselves.) 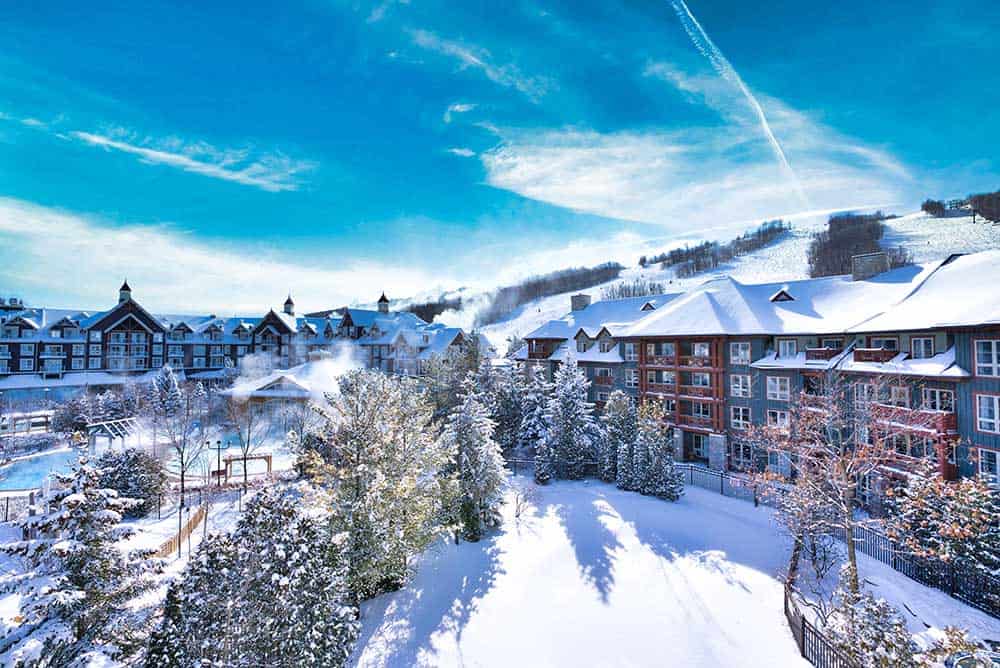 With its highest point of elevation at just 450 metres, Blue Mountain Resort isn’t in the same league as big ski resorts in the Rocky Mountains or even The Laurentians. Nonetheless, it’s a fantastic Ontario winter getaway for families and couples alike.

If you happen to visit Quebec in winter, hitting the powder at Mont Tremblant Resort is a must. Located just 90 minutes from Montreal, Mont-Tremblant is one of the most accessible skiing destinations in Canada and offers the best ski & snowboard pistes east of the Canadian Rockies. 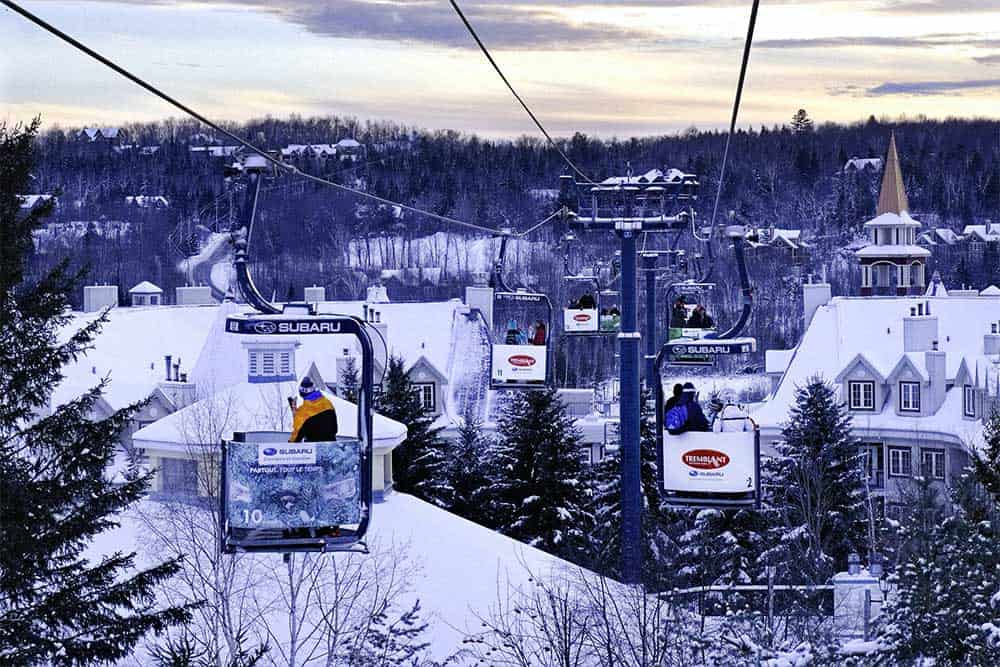 Although its ski area is one of the smallest among the major ski resorts in Canada at just 665 acres, Mont Tremblant makes up for it with its wide variety of trails for skiers of all levels, powdery snow, and an atmospheric European-inspired mountain village that’s loaded with restaurants, boutique, hotels, après-ski bars, and a whole lot of Quebecois charm.

When to go skiing in Canada

As you might be aware, discussing Canadian weather rarely ends with an easy answer. The ski season in Canada generally runs between late November to the end of April. But you’ll need to go a little further than that if you want to plan the perfect Canadian ski vacation.

Thanks to their higher elevation, the ski resorts in Western Canada are the first to open up and the last to close down.

At the earliest, you’ll find places like Banff Sunshine welcoming its first guests as early as early November. Most resorts, however, don’t officially open their runs until late November to mid-December. The ski season in Western Canada generally lasts until mid-April to early May at the latest. 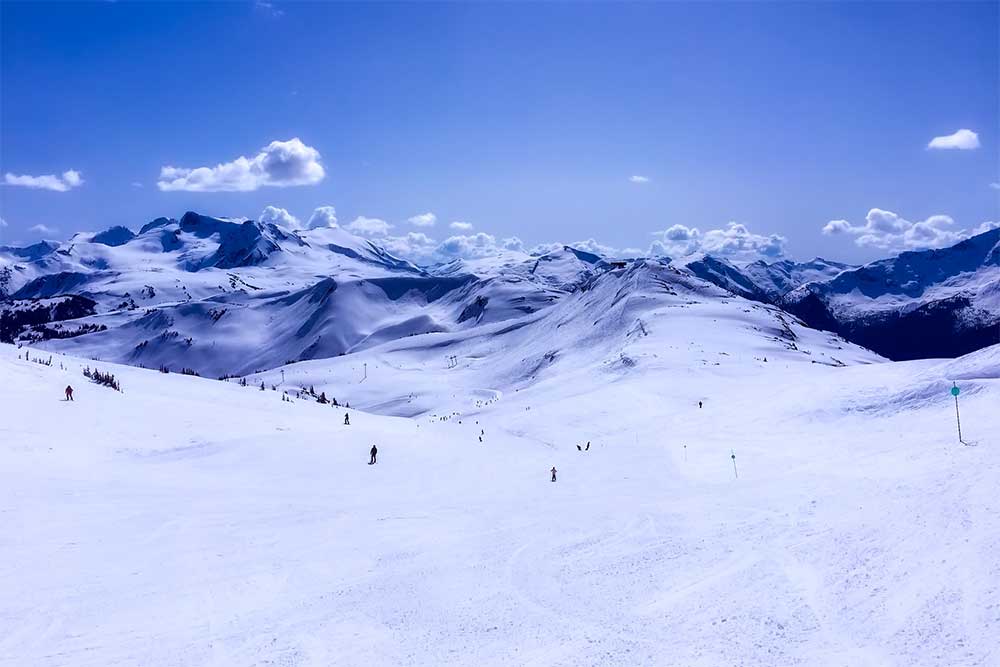 The best ski resorts in Eastern Canada are a different story.

The best time to go skiing in Canada is between January and March.

Keep in mind that January and February are the two coldest months of the year in Canada. They do, however, offer the best snow conditions during the Canadian ski season.