As with most destinations in Southeast Asia, choosing the best time to visit Singapore is a must for planning your adventure. This mini-nation on the tip of the Malay Peninsula defies the usual Southeast Asian stereotypes. One exception, however, is the weather in Singapore.

Like much of the region, Singapore isn’t known for year-round perfect blue skies & endless sun. In fact, at certain times of the year, planning a trip to Singapore can get a tad complicated.

Scratching your head on when to go to Singapore? Finalize your plans with this complete Singapore weather guide including the best months to visit Singapore and a summary of weather in Singapore by month and by season…

When to go to Singapore: A weather overview

If you’ve already got some experience planning a trip to Southeast Asia, you won’t be surprised to find out that Singapore experiences hot & humid weather all year round. 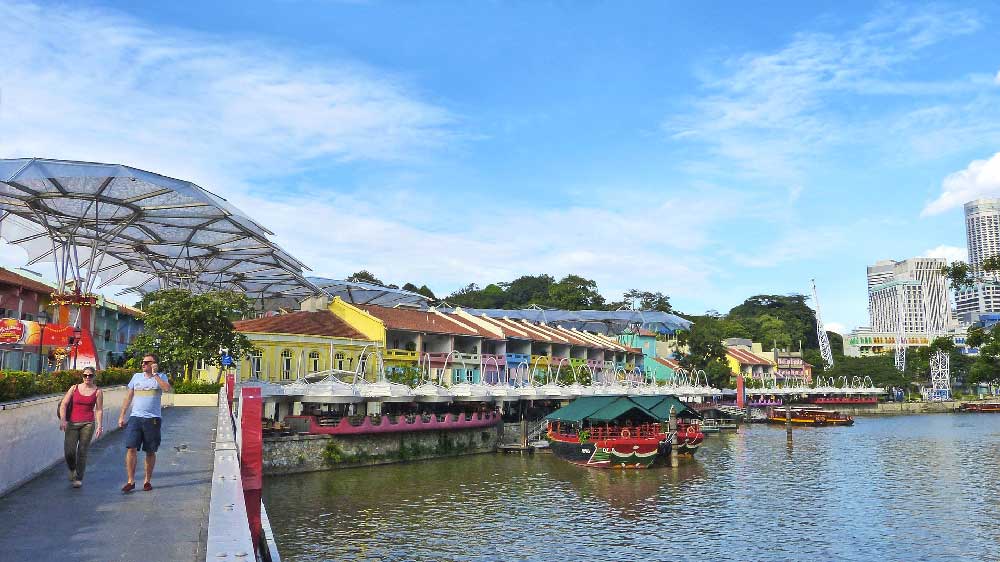 Much like its neighbours, Singapore can range between anything from pleasant hot & sunny days to torrential downpours that will make you second guess your decision to travel to this rainy netherworld.

Overall, the best time to go to Singapore is between February and April.

Although Singapore is—for the most part—a year-round destination, the months of February to April fall within Singapore’s dry season and experience (a least a tad) less rainfall than other times of the year.

While you’re never quite in the clear in Southeast Asia, a higher chance of sunny days and lower precipitation can go a long way in letting you experience all the top things to do in Singapore with less hassle.

Visiting Singapore? Don’t forget to protect yourself with travel insurance!

When is wet season: From September until February

What to expect: As the name implies, you’ll need to expect a soakin’ on any given day during wet season in Singapore. The wettest months of the year in Singapore fall between November and January. 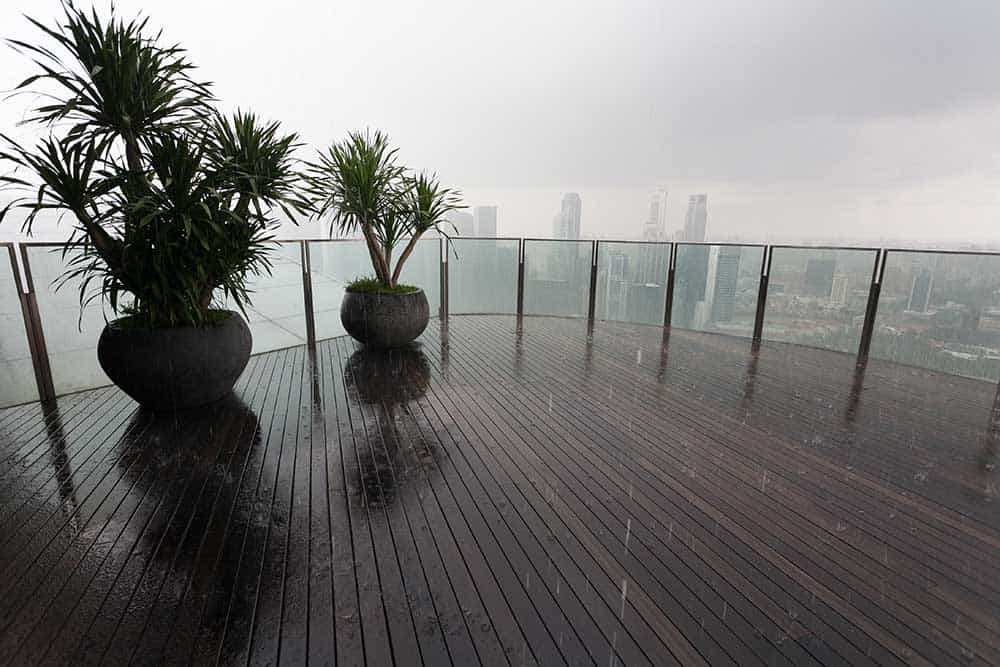 Unlike in dry season, rains won’t just come in quick spurts but can last for extended periods of time. Travelling during this season can really put a damper on your Singapore itinerary.

It’s not all doom and gloom either. Even in wet season, you can experience pleasant weather.

What to wear: Even with all the extra rainfall, Singapore stays quite hot during monsoon season. Like other times of the year, you’ll want to wear lightweight clothing.

I’d recommend splurging on high-performance quick-drying gear rather than relying solely on your ordinary wardrobe. If you get caught in a flurry of rain in Singapore, you’ll thank me.

Also be sure to pack a lightweight & breathable waterproof jacket and a sturdy umbrella. 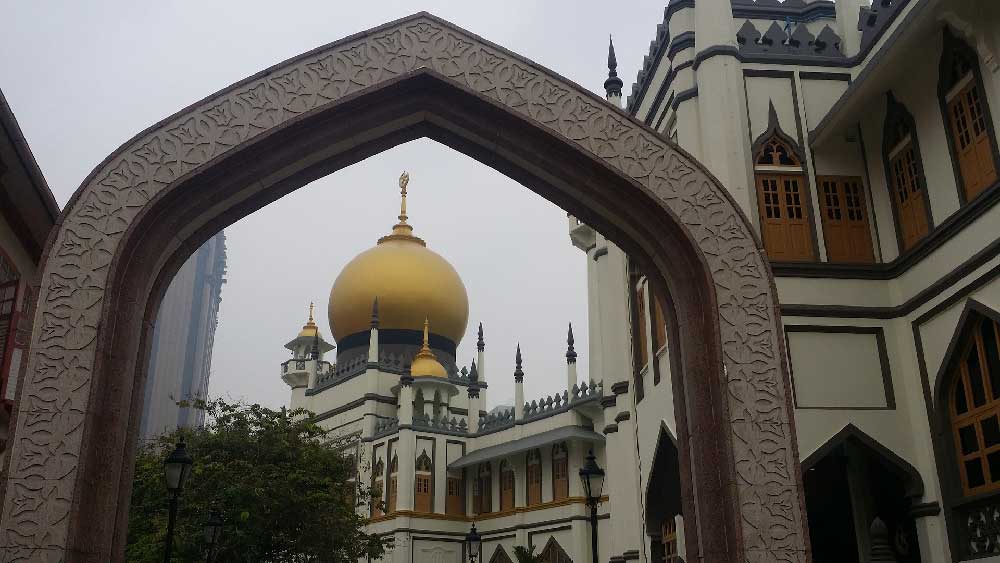 When is dry season: From February until August

What to expect: Don’t expect to be on the hook for perfect weather just because it’s dry season.

Even dry season in Singapore is patently unpredictable, and you should still expect to catch some rains during this time.

The best weather and the best time to travel to Singapore generally falls between February and April. 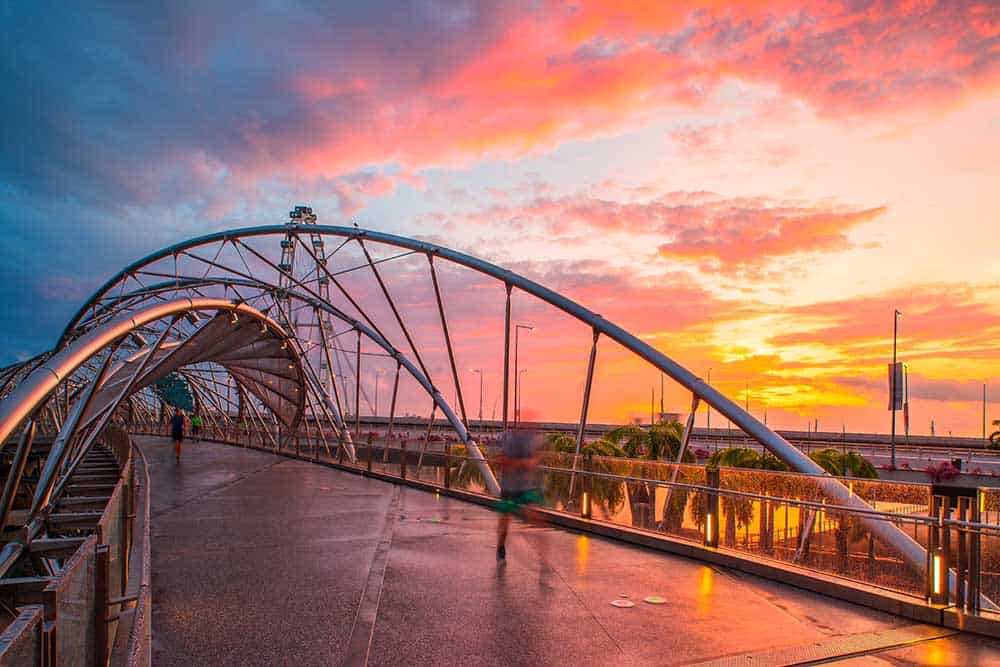 For sightseeing, you’ll likely want to avoid the months between May and August when smoke blows in from clearing fires in Sumatra.

During these months air quality in Singapore can be quite low and the haze can put a damper on your views.

What to wear: The heat & humidity, once again, necessitate lightweight clothing. You’ll want to avoid wearing thick clothing like jeans and stick to light materials and colours for comfort.

Don’t forget to add an ultralight rain jacket and an umbrella to your Singapore packing list for the inevitable bursts of afternoon rain.

Overview of January: January is among the wettest months in Singapore as the Northeast Monsoon is still pushing through.

Temperatures in Singapore are, as usual, quite hot, even if a tad cooler than other times of the year.

About every third year, Chinese New Year falls at the end of January.

Overview of February: A little hotter and quite a bit drier than the previous month, February is the start of better things to come and a top choice for when to go to Singapore.

By this time, the Northeast Monsoon should be on its way out, allowing the weather in Singapore to take a turn for the better.

The beginning of February often marks the start of Chinese New Year in Singapore. You’ll want to book your accommodations well ahead of time if you choose to visit during the festivities. 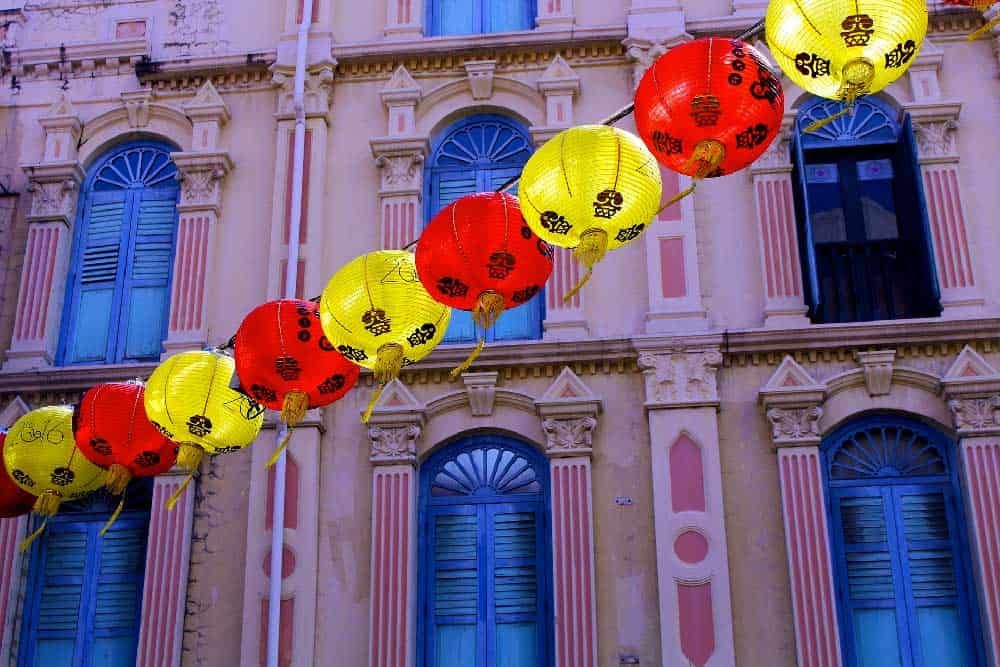 Overview of March: Along with February, March is one of the best months of the year to travel to Singapore.

With “only” 17 days of rain, March delivers more sunshine to Singapore than normal. It’s the second sunniest month in Singapore on average next to February and is a great time to check out some of the city’s top outdoor attractions whether it’s marvelling at Gardens by the Bay or sipping cocktails at Clarke Quay.

Overview of April: In April, the hot weather continues. Although rainfall is slightly lower than in March, there are fewer sunny days in Singapore in April as thunderstorms are more frequent. 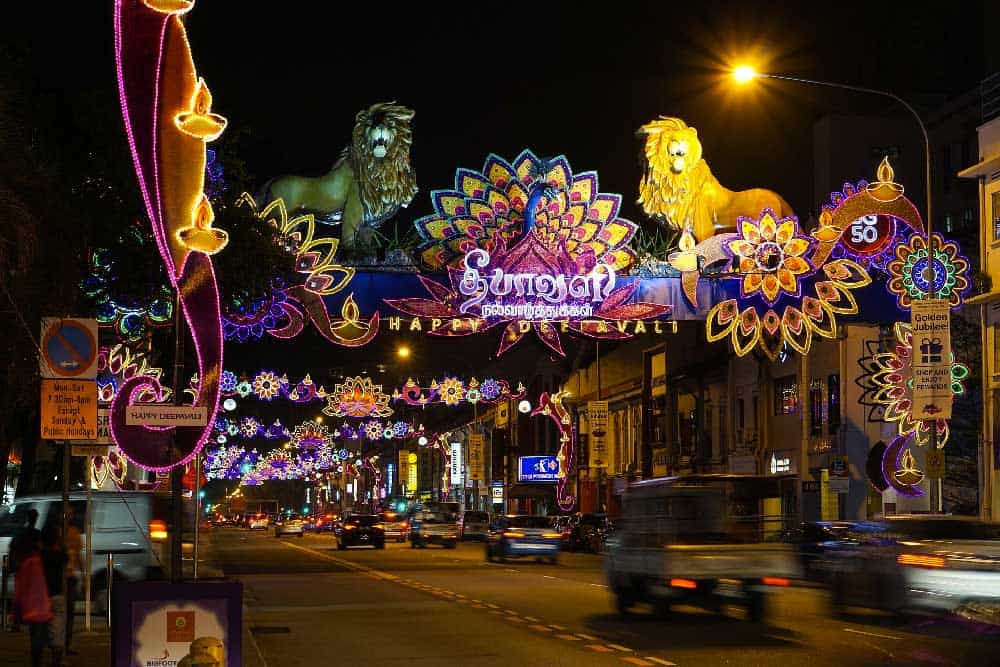 Overview of May: Like March & April, you should expect heat & humidity into the month of May.

The biggest change in weather comes with the start of fire season in nearby Sumatra.

Starting in May, Singapore can become infiltrated with smoke & haze from the Sumatran fires. Visitors with pre-existing respiratory problems like asthma should avoid visiting Singapore at this time.

Overview of June: With the Southwest Monsoon sweeping in, June is a transition period the weather here. Morning thunderstorms are frequent yet pass through quickly.

Like during May, the fires from Sumatra can create an unpleasant lingering haze over Singapore.

Despite the less desirable weather, June is one of the busiest months to go to Singapore thanks to the Great Singapore Sale. The Singapore Food Festival and the Dragon Boat Festival also take place in June. 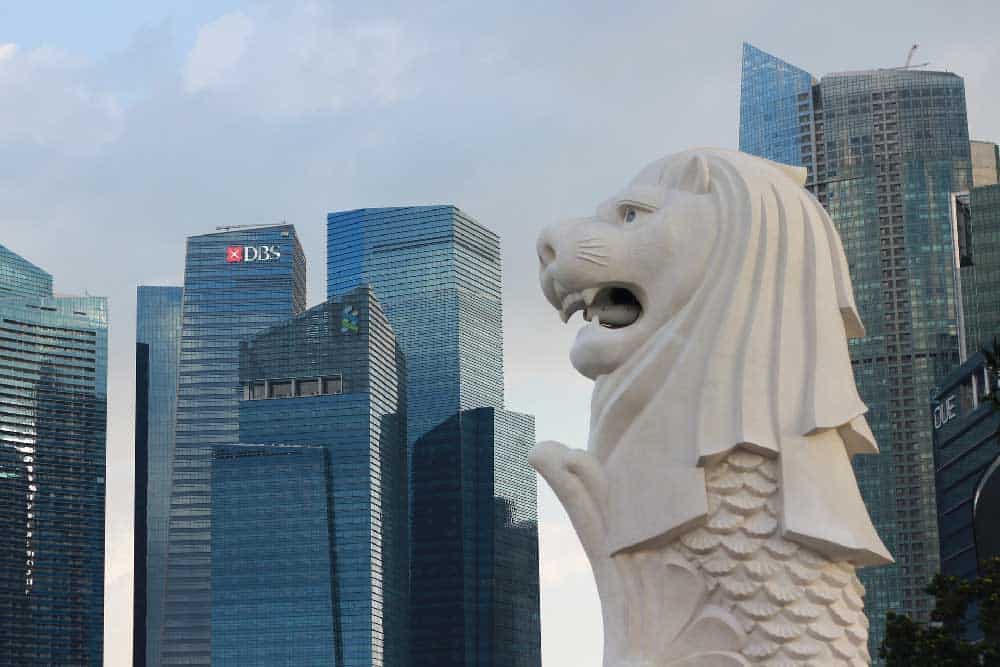 Overview of July: Despite the Southwest Monsoon, July is the driest month in Singapore. Thunderstorms are commonplace, but stop as quickly as they start.

Even if the weather is among its best, the haze from Sumatra is still a problem in Singapore at this time of year.

Plus, with the Great Singapore Sale still kickin’, the best hotels in Singapore are among their fullest and priciest.

Overview of August: There’s little change in temperature in Singapore with a slight increase in rainfall going into August.

The Sumatran fires still pose a possible risk, and August can often be a difficult month for anyone with breathing problems.

As with much of the year in Singapore, bursts of thunderstorms are common in August.

Singapore’s National Day, celebrating the city state’s independence, falls on August 9th every year. Catch the huge parade and spectacle at Marina Bay to take part in all the fun! 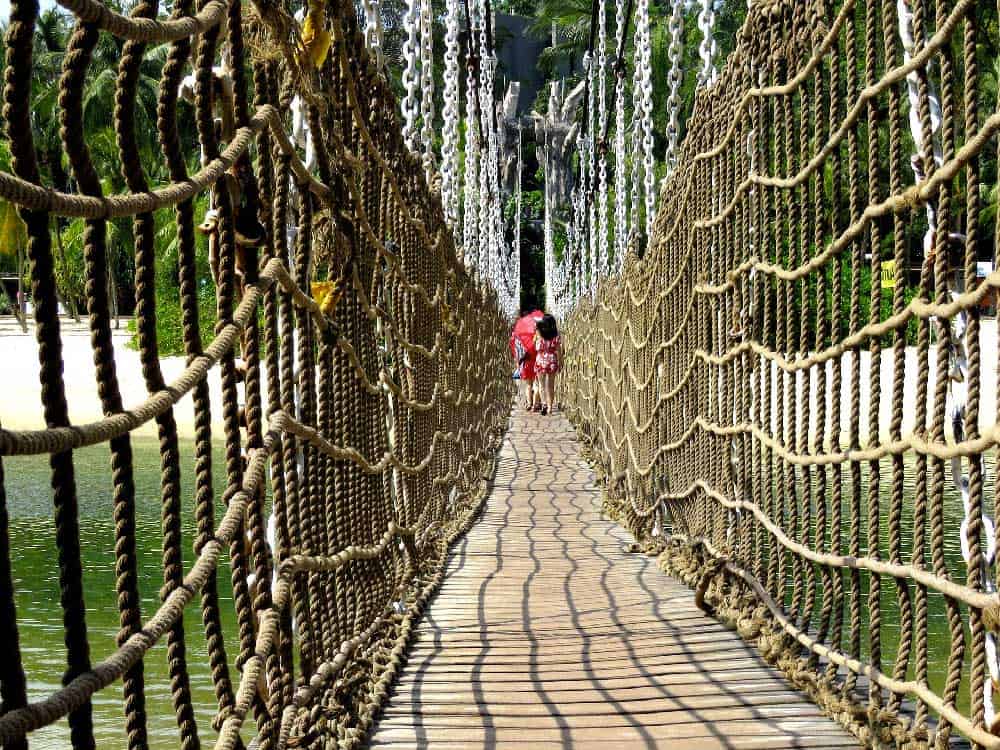 Overview of September: Into the month of September, the Southwest Monsoon gives way to—surprise, surprise!—more heat & humidity. September in Singapore is slightly drier than August.

With the haze from Sumatra finally dissipating, September is overall a better month to travel to Singapore.

Keep in mind that the city hosts the famous Singapore Grand Prix towards the middle of September. Book well ahead or otherwise avoid these dates if you want to keep your budget in check.

The Mid-Autumn Festival and Hungry Ghost Festival are also celebrated in September.

Overview of October: Although it’s technically between monsoon seasons, October sees a sharp increase in rainfall in Singapore compared to September.

Average temperatures in Singapore remain much the same, but afternoons can be slightly more tolerable than the “summer” months thanks to a cool breeze from the straits.

Afternoon thunderstorms are expected and can be quite heavy and off-putting. 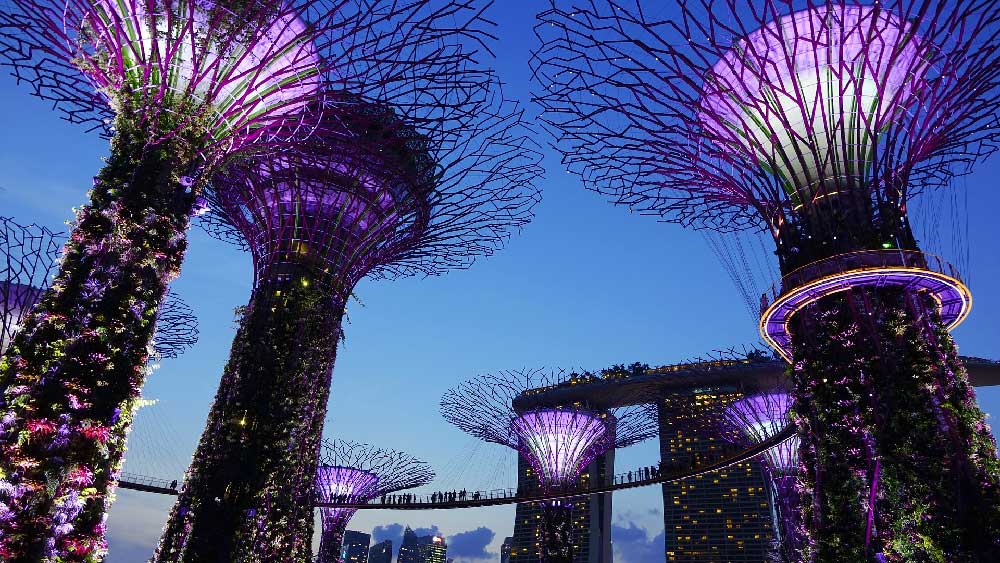 Overview of November: Like October, November is wedged between the Southwest & Northeast Monsoon seasons.

Even so, November’s the second wettest month of the year in Singapore and is far from the ideal time to travel to Singapore.

Overview of December: By December, the Northeast Monsoon officially rolls into Singapore.

December is the wettest month of the year with an average of 269 mm falling over 25 days.

Needless to say, this is month that’s best avoided for travellers if at all possible.

The verdict: When is the best time to go to Singapore?

The best month to visit Singapore is February or March.

Why visit in February or March?

Heat, humidity & rainfall define the Singapore weather experience all year round. Although you’ll never fully escape the wrath of the typical Southeast Asian climate of Singapore, February and March are great months to visit Singapore.

During either of these months, you’ll have the best chance of enjoying your vacation fully.

Both February and March fall in Singapore’s “dry” season, outside of the Southwest and Northeast Monsoons when torrents of rain hammer down the city-state.

These two months have the lowest number of rainy days (13 and 17 days) in the year and among the lowest overall rainfalls. 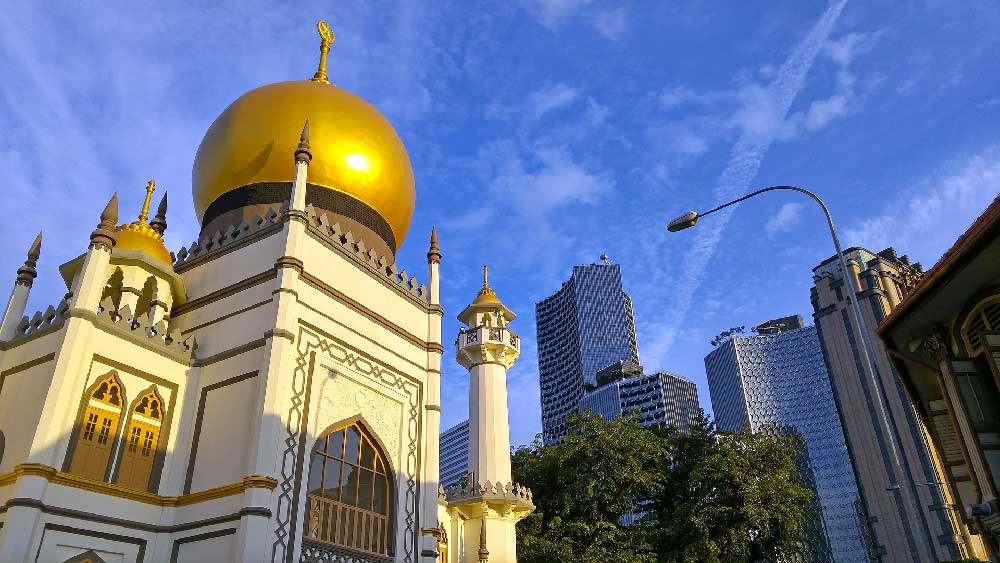 Compared to other “dry” months like June and July, travelling to Singapore in February and March has other perks.

During the summer months, there’s often a haze over the city from fires burning in nearby Sumatra. This can be a big problem for some travellers, particularly those with respiratory problems.

Accommodations will not only be more difficult to find but will be more expensive. And in the already pricey Singapore hotel market, this can put quite the strain on your budget—especially if you’re looking to stay in a mid-range hotel or in one of the best Singapore luxury hotels.