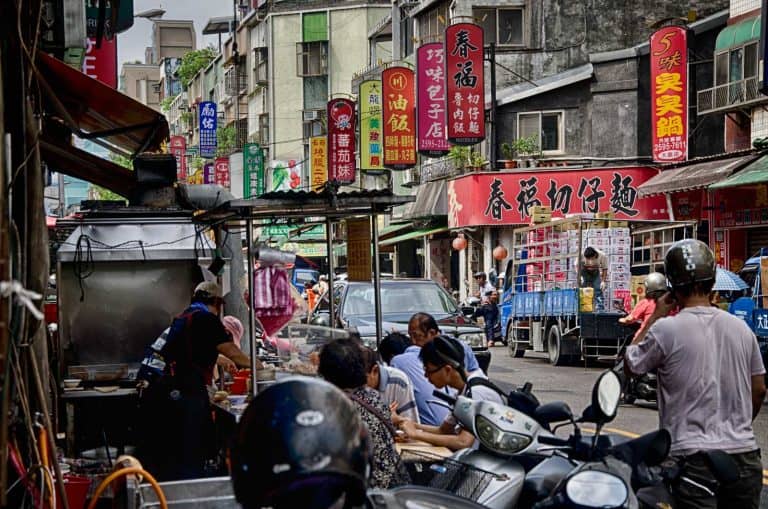 When planning a trip to Taipei, nothing deserves your attention more than sorting out the best time to visit Taipei.

Taipei doesn’t have gigantic four-season temperature swings like other top world travel destinations. But that doesn’t mean you should choose when to go to Taipei willy-nilly.

The weather in Taipei can be extreme. And not planning right can quickly turn an otherwise well-intentioned travel plan sour.

Not sure when to visit Taipei? Plan your trip with this complete Taipei weather guide. We’ve included ideas for the best month to travel to Taipei and what to expect & what to wear in Taipei by season & month.

Need more inspiration for your Taipei trip? Time your trip perfectly with our other when to go & weather guides . Also check out our Taipei Travel Guide for more recommendations on where to go, what to do & where to stay!

When to go to Taipei: A weather overview

Even so, extreme temperatures in Taipei, much like nearby Hong Kong or Macau, push in one direction: hot. Cold is rarely a concern here. Most of the year falls between pleasantly mild and unpleasantly hot & sticky.

Then again, the temperature isn’t the problem in Taipei. 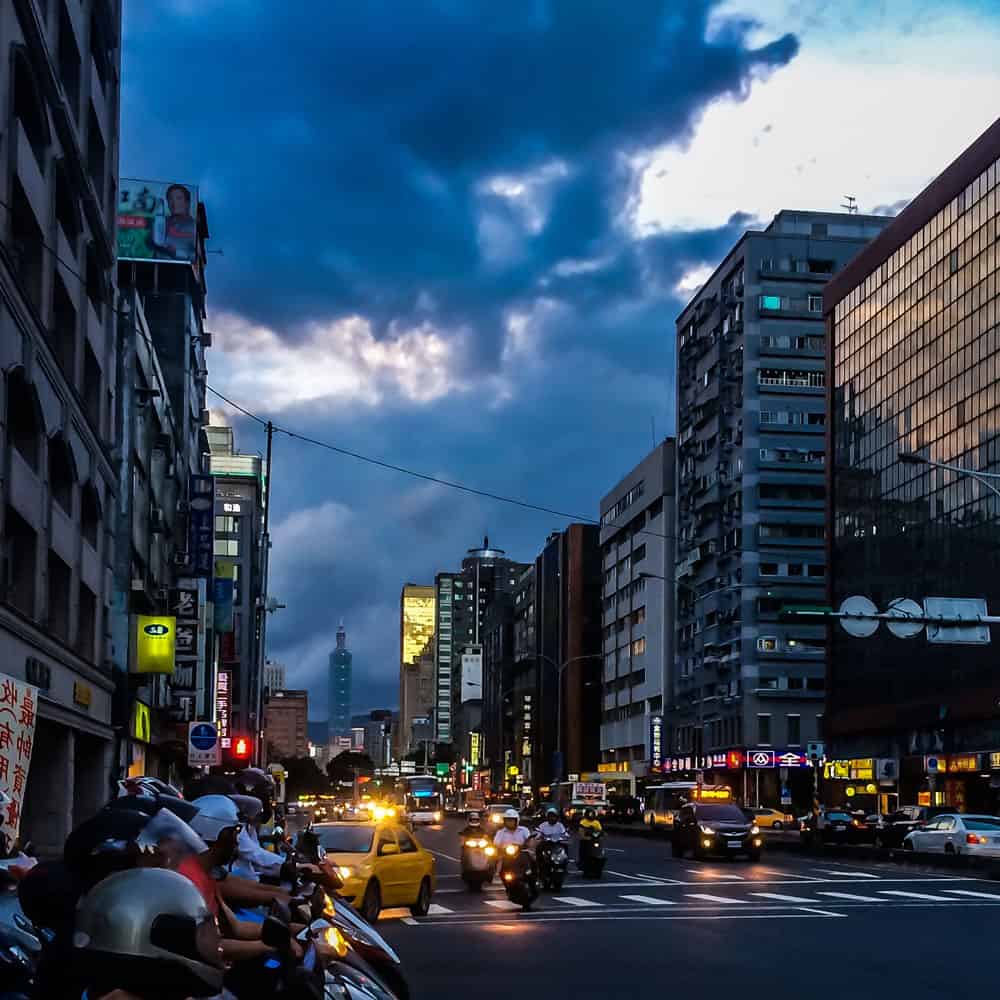 Throughout the year, Taipei gets hammered with rain. And, if the season is (not-so) right, a couple nasty typhoons. You’d do best to avoid these. (Unless extreme storm-chasing gets your heart pumping!)

Ready to travel to Taipei? Don’t forget to protect yourself with travel insurance!

Travel insurance from WorldNomads.com is available to people from 140 countries. Their policies are designed for adventurous travellers. They offer cover for overseas medical, evacuation, baggage and a range of adventure sports and activities.

When is spring in Taipei?

Spring in Taipei is from March until May.

What to expect in spring 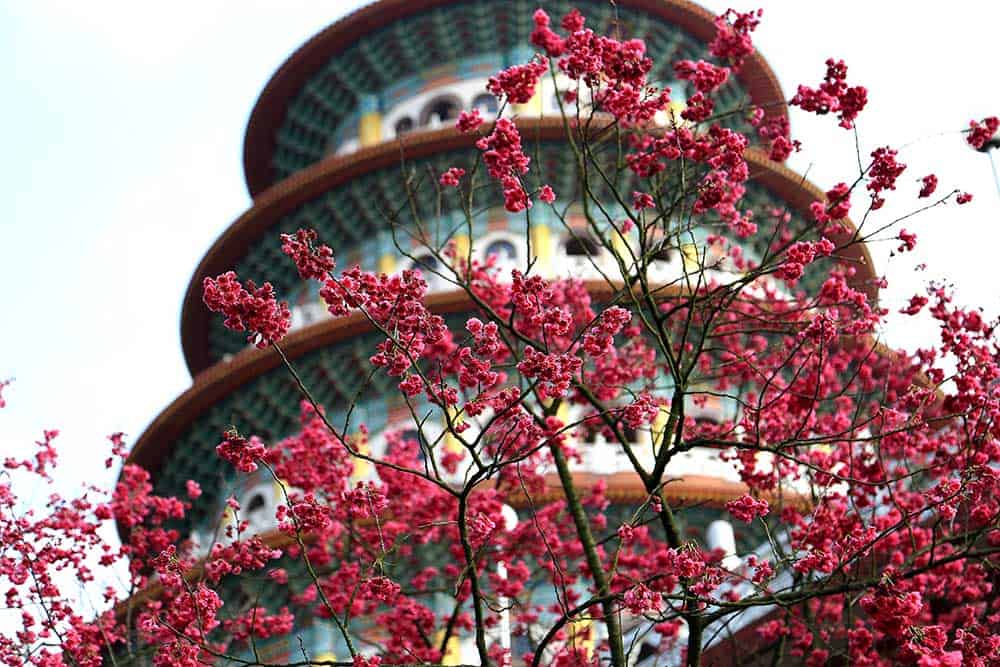 Coming out of winter, rainfall picks up as spring trots along. By the end of May, wet season is officially upon you. If you’re planning to visit Taipei in spring, try to make it before then.

Spring also marks the tail-end of the cherry blossoms around Taipei. To catch them in March, venture into Yangmingshan National Park and Tianyuan Temple. (And cross your fingers.)

What to wear in spring

Towards the beginning of spring, a light jacket or light sweater should be enough to keep you comfortable. Wearing layers is a good idea for spring in Taiwan. You’ll also want to keep a good travel umbrella and a lightweight rain jacket handy.

Visiting Taipei on a time crunch? Maximize your time with this two-day Taipei itinerary and this guide to the best places to stay in Taipei!

When is summer in Taipei?

Summer in Taipei is from June until August.

What to expect in summer 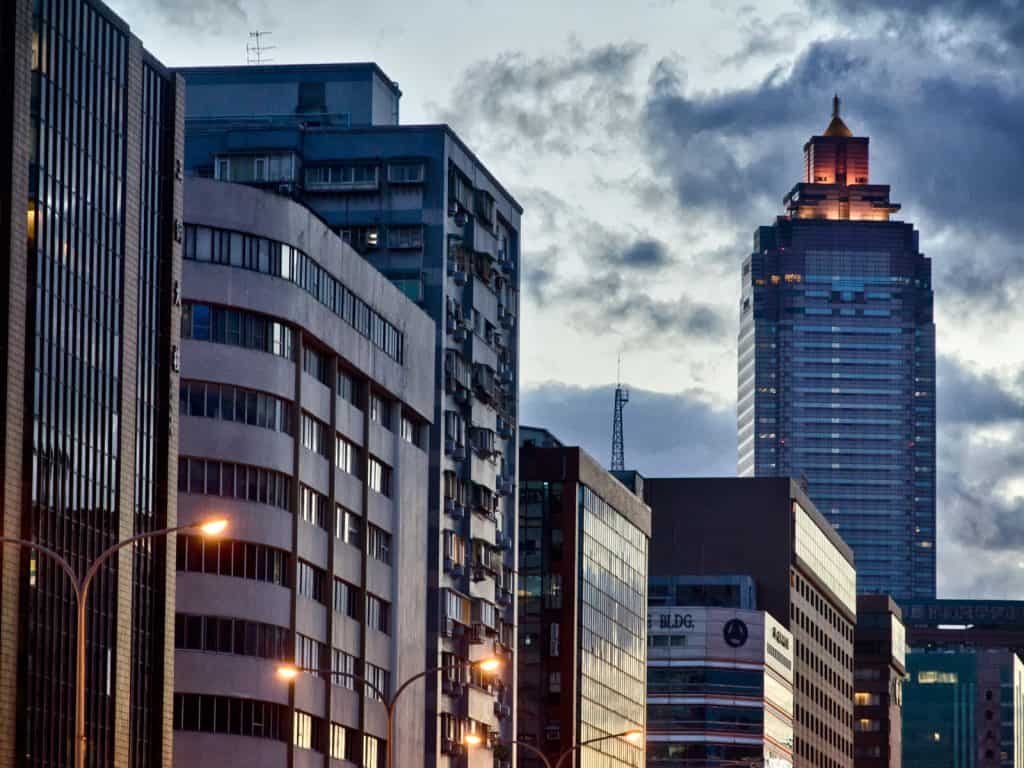 In summer, getting drenched is a real possibility. Expect between 160mm and 230mm of rainfall each month. Even with the humidity, June to August is one of Taipei’s high tourist seasons. Finding a good place to stay in Taipei can be a challenge without advance bookings.

What to wear in summer

Add an umbrella and waterproof clothing to your Taiwan packing list. Include a breathable lightweight waterproof jacket, too. You’ll be most comfortable walking around the city in shorts and a T-shirt. The extreme heat can be killer in summer!

When is autumn in Taipei?

Autumn in Taipei is from September until November.

What to expect in autumn 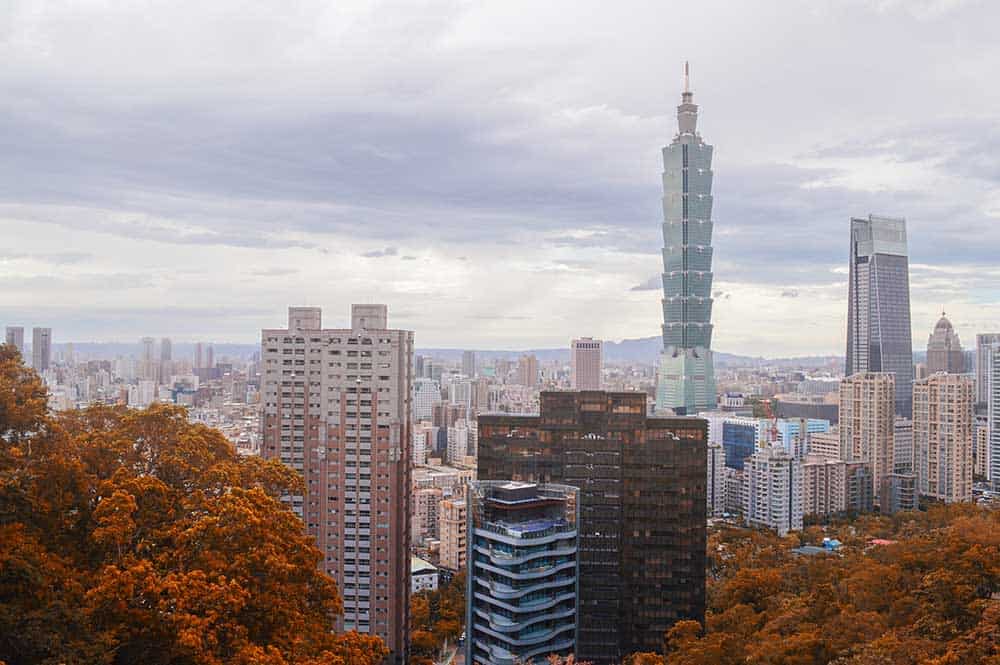 Other than in September, the rainiest month in Taipei, expect less rain during autumn in Taipei. Autumn is firmly outside of Taipei’s high tourist season. Finding accommodations in Taipei is easier in fall than at other times of the year.

What to wear in autumn

With warm temperatures, light clothing still works best in autumn. You may need a light sweater or coat. As always in Taiwan, carry a small umbrella and a light waterproof jacket, just in case. Breaking from the humidity, autumn is a great time to hit up the hiking trails in and around Taipei. Bring along a sturdy pair of hiking shoes.

When is winter in Taipei?

Winter in Taipei is from December to February.

What to expect in winter 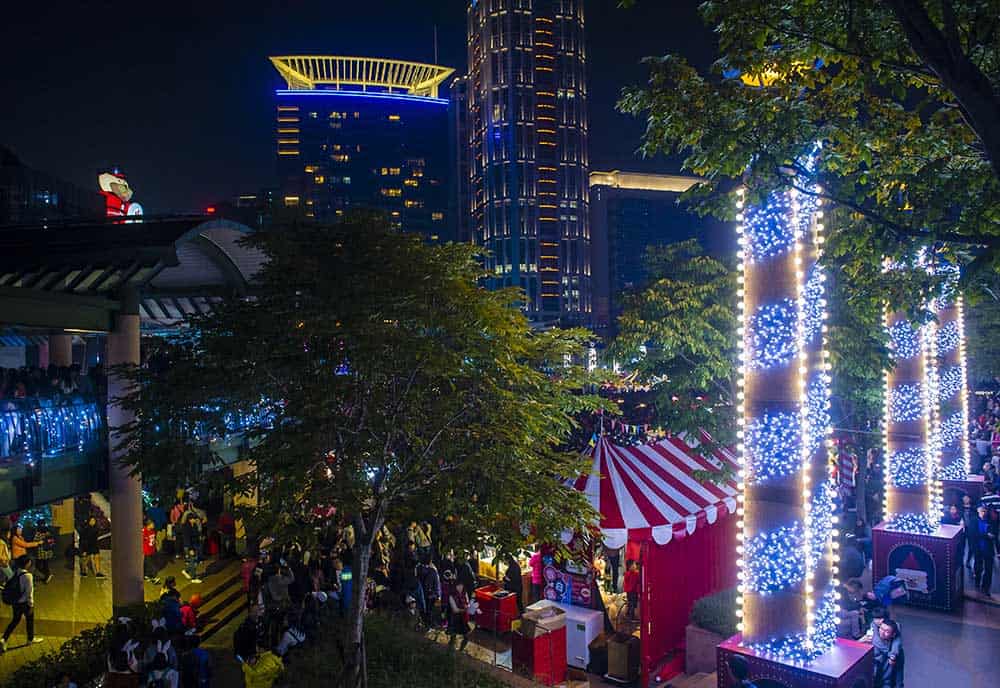 December is the driest month in Taipei with only 60mm of rain. Chinese New Year falls between late January and early February. Make sure to plan your Taipei accommodations well ahead if you plan to travel during this holiday.

Late winter also marks the beginning of cherry blossom season in Taipei. The cherry blossoms often emerge around Taipei in February and last until the end of March.

What to wear in winter

With the cooler temperatures pack warmer clothing in your travel rucksack including an all-season coat. Daytime temperatures are still relatively mild, but the evenings will get chillier. Dressing in layers is recommended.

January is the coldest month in Taipei, but also one of the driest. It’s still mild enough for comfortable travel. Chinese New Year sometimes falls at the end of the month. It’s a busy time to travel in and around Taipei. Be sure to book your accommodation well ahead.

Want to scoot around Taipei without hassle? Pick up a Taipei Unlimited Fun Pass! Includes unlimited use of the Taipei MRT, buses, and tourist shuttle routes and FREE admission to 12 Taipei attractions.

February is, on average, the second coldest month in Taipei. Expect more rainfall in February than in January. Chinese New Year often falls in early February along with the Lantern Festival. February a festive choice for when to visit Taipei, but busy. Book your accommodations early to avoid elevated prices and a lack of availability.

February also often marks the beginning of cherry blossom season in Taipei. To see the cherry blossoms at their best in February, head to Yangmingshan National Park. 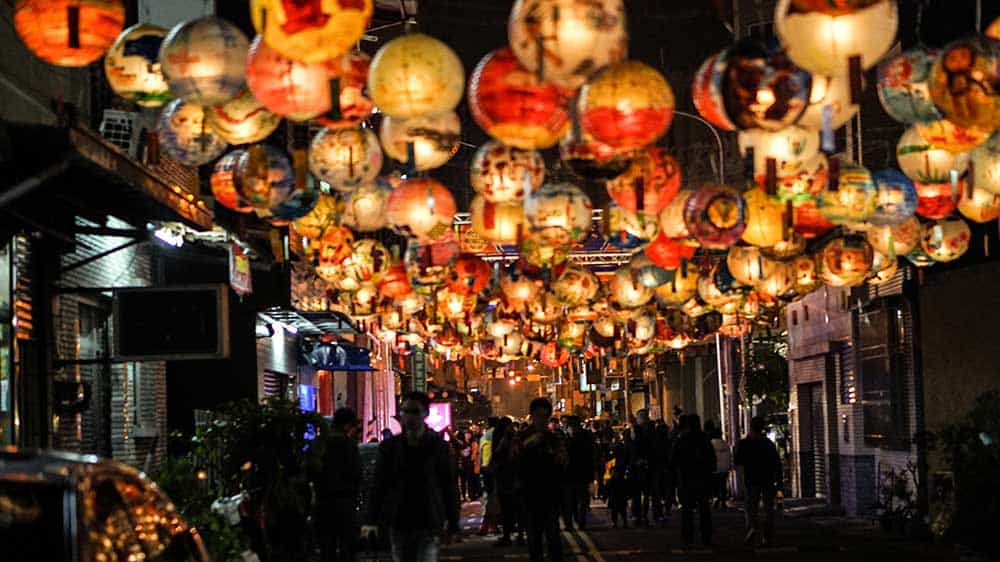 March is the first month of spring in Taipei. March is warmer and wetter than February. Temperature-wise, March is still mild. Wearing layers and carrying waterproof clothing & an umbrella is recommended. Visiting Taipei in March has the added bonus of falling at the tail-end cherry blossom season. If you’re lucky you should be able to catch the blooms until late March.

Want to move beyond Taipei? Take on new Taiwanese horizons on a 4-Day Central & Southern Taiwan Tour! Highlights include the majestic Sun Moon Lake and the ornate temples of Lukang. You’ll also get a chance to check out the delightful seaside charms of Kenting National Park. 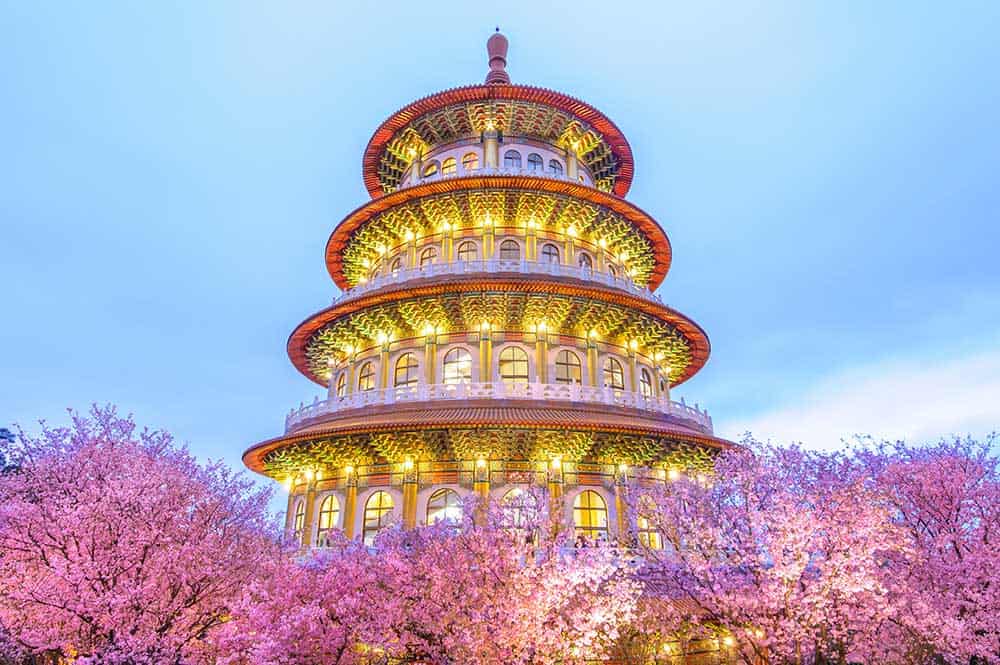 Rainfall continues to be heavy into May and temperatures are continuing to climb. If travelling to Taipei in May, waterproof clothing and a strong travel umbrella are a must. The beginning of the month is often drier than the end.

June is the first in a series of uncomfortable travel months in Taipei. Expect rain—and lots of it. Daytime temperatures climb into the 30s regularly. In the heat & humidity, you’ll appreciate Taipei’s indoor shopping and underground passageways. 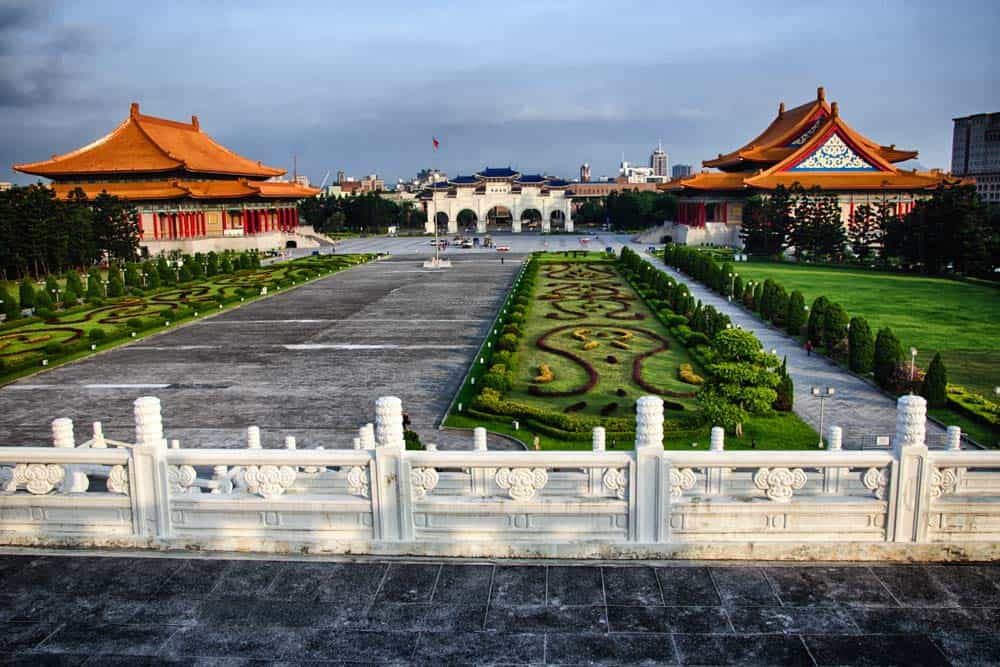 In July, both the heat and summer rainfall ramp up. July in Taipei gets extremely hot and humid with frequent thunderstorms. Typhoons are a real possibility. July is not one of the best months to visit Taipei.

Stay hydrated (and minimalist) by keeping a collapsible water bottle in your travel daypack.

Want to get pampered and fill your belly with xiaolongbao while in Taipei? Get a 50-minute Chinese foot massage followed by a mouth-watering soup dumpling dinner on a Din Tai Fung & Luxury Massage Tour!

August is the second wettest month in Taipei. Like July, August in Taipei is extremely hot and humid. Anticipate frequent afternoon rainstorms and possible typhoons. August is not a good month to travel to Taipei. 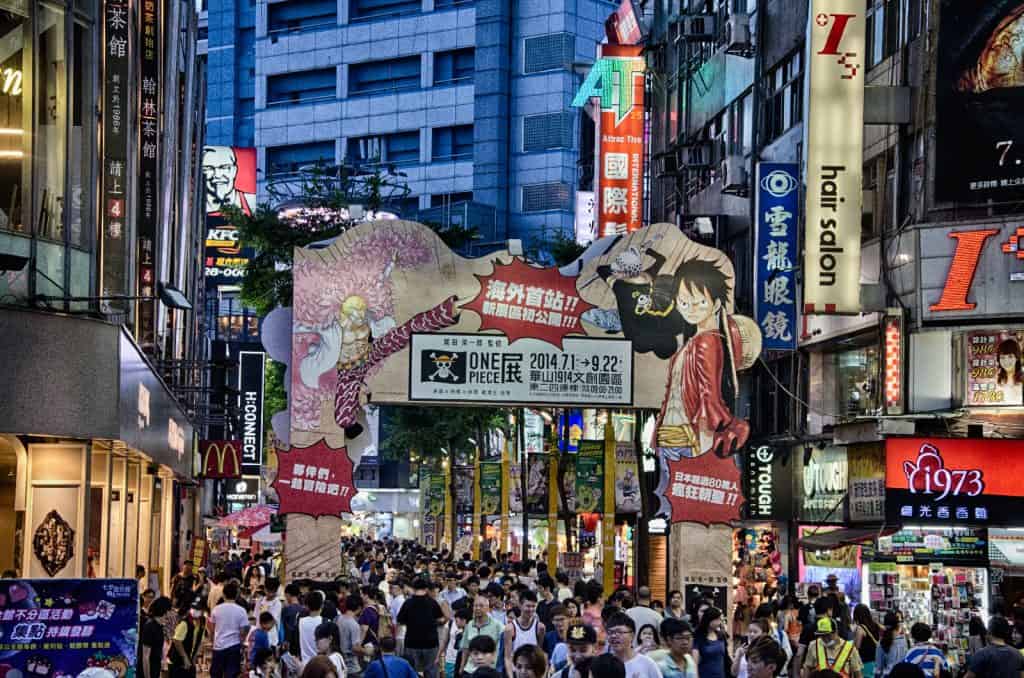 On average, September is the wettest month in Taipei. In September, temperatures drop off slightly from August. It’s still often uncomfortable for travellers not used to extreme heat and humidity. If you’re going to visit Taipei in September, wait until the end of the month. By the end of September, the rainfall dips along with the risk of typhoons.

Want to see the Taipei skyline at its best? Watch Taipei light up from above on a guided evening hike up Elephant Mountain with the Private Night Tour of Taipei! Also includes an evening visit to Bao’an Temple and meal & bubble tea on Yongkang Street.

Rainfall in Taipei plummets significantly from September. October temperatures are easier to tolerate. Taipei in October is still hot, but no longer unbearable. 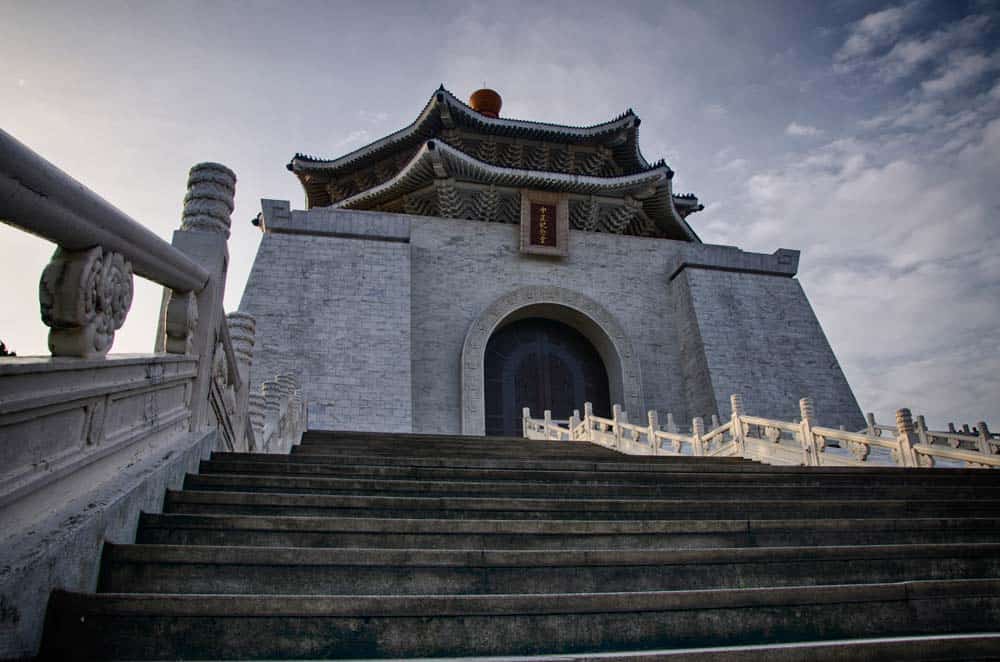 November is a very pleasant month to travel in Taipei and one of the best times of the year to dig into all the best things to do in Taipei.

Temperatures are far more moderate as is the rainfall. November is one of the driest months with 80mm of precipitation. (Although “dry” in Taiwan is always relative.) With the cooler evenings, November is a great time to explore Taipei night markets comfortably.

Want to see Taipei with ease? Pick up a ticket for the Hop-On Hop-Off Taipei Bus Tour! Includes stops at all the top Taipei attractions scattered all across the city.

On average, December is cooler than November. December is the first month of winter in Taipei, but temperatures are still very mild and pleasant. Wearing layers will help you to stay comfortable all day long. December is the driest month in Taipei on average.

When is the best time to visit Taipei?

The best month to visit Taipei is November.

The decision to visit Taipei in November is an easy one. November is one of the driest months in Taiwan’s capital. The temperatures are still warm, although hardly unbearable as the heat and the humidity of a Taiwanese summer often proves. It’s also a colourful time of year as the fall colours are out in full swing. 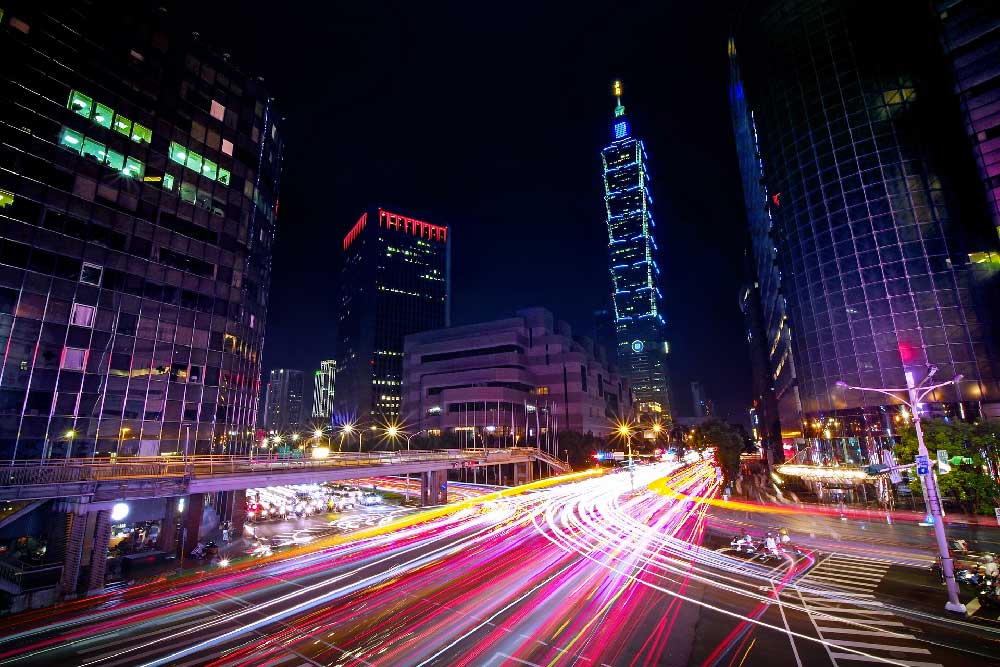 If visiting Taipei in November isn’t possible, October and April are the next best alternatives.

October is still warm and late October sees a drop off in rainfall. April are October are similar in regards to temperature, although April can be slightly cooler and rainier.