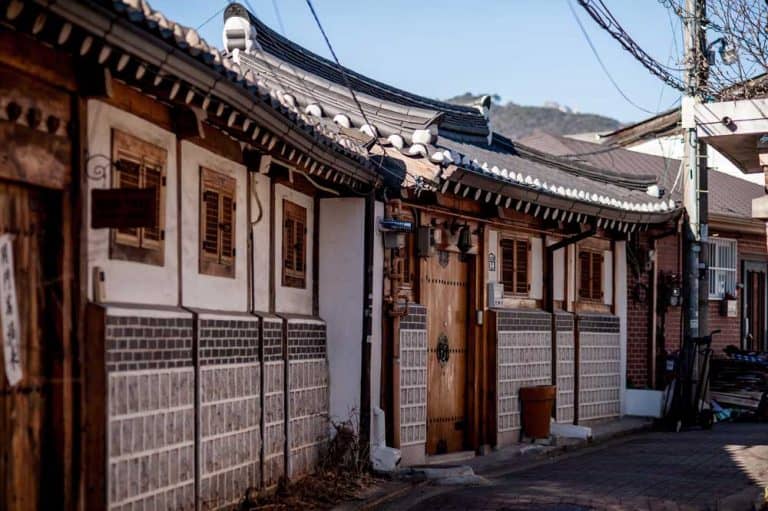 The jury’s out: There’s no place in Seoul quite like Bukchon Hanok Village.

This quaint residential neighbourhood balks at most visitors’ first impressions of Seoul. It proves there’s more to the capital of South Korea than bustling street scenes and vistas of never-ending skyscrapers. In fact, Bukchon Hanok Village hearkens back to Seoul six centuries in the past.

You might expect to find an area this charming wedged into a little-known corner of Seoul. That’s not the case. At all.

Even if you have only one day in Seoul, the central location places the neighbourhood among Seoul’s must-see attractions.

Looking for more ideas for your trip? Check out our Seoul Travel Guide for recommendations on when to visit, where to go & what to do!

What to expect at Bukchon Hanok Village

It’s hard to imagine Seoul as anything but the megapolis we see today. And that’s what makes Bukchon Hanok Village so special.

Bukchon Hanok Village dates back to the Joseon Dynasty. This prosperous Korean kingdom lasted from the late-14th century until 1897. The historic buildings here reflect the traditional architectural styles of the Joseon period. 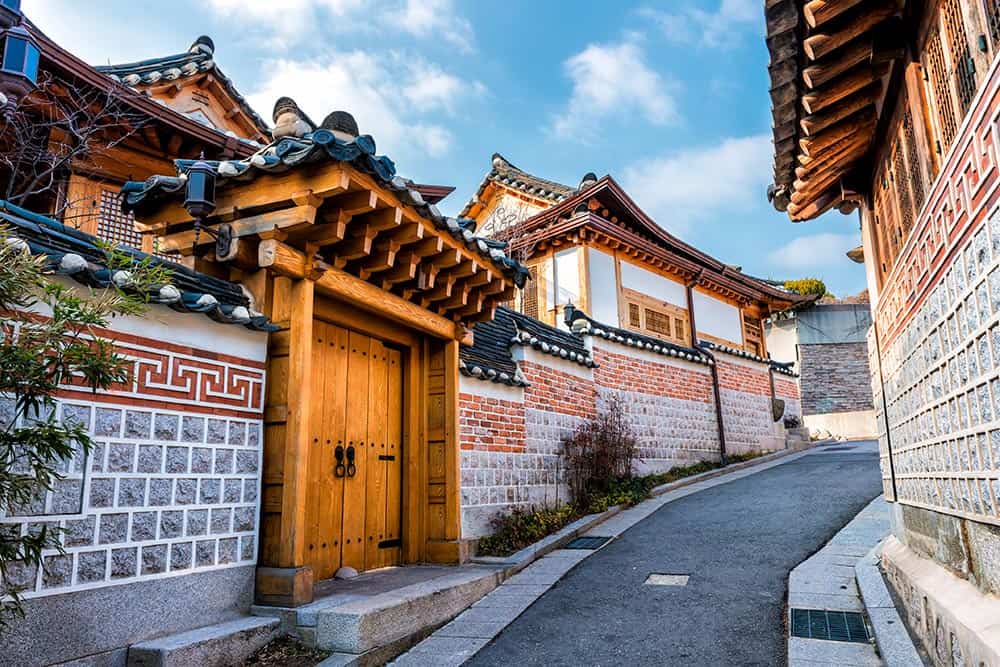 The neighbourhood isn’t the only historic village in Seoul. On the north side of Namsan, you’ll find another: Namsangol Hanok Village.

Unlike Namsangol Hanok Village though, Bukchon Hanok Village is a real functioning neighbourhood. It’s not simply staged to impress visitors.

Bukchon Hanok Village features about 900 hanok. These traditional wood homes were once commonplace in every Korean town or village.

Bukchon Hanok Village was a particularly prosperous village within Seoul. In that light, its remarkable outward appearance shouldn’t be so surprising! Many of the hanok here once housed the upper-crust of Joseon society. Included among them were members of the royal family and nobles. 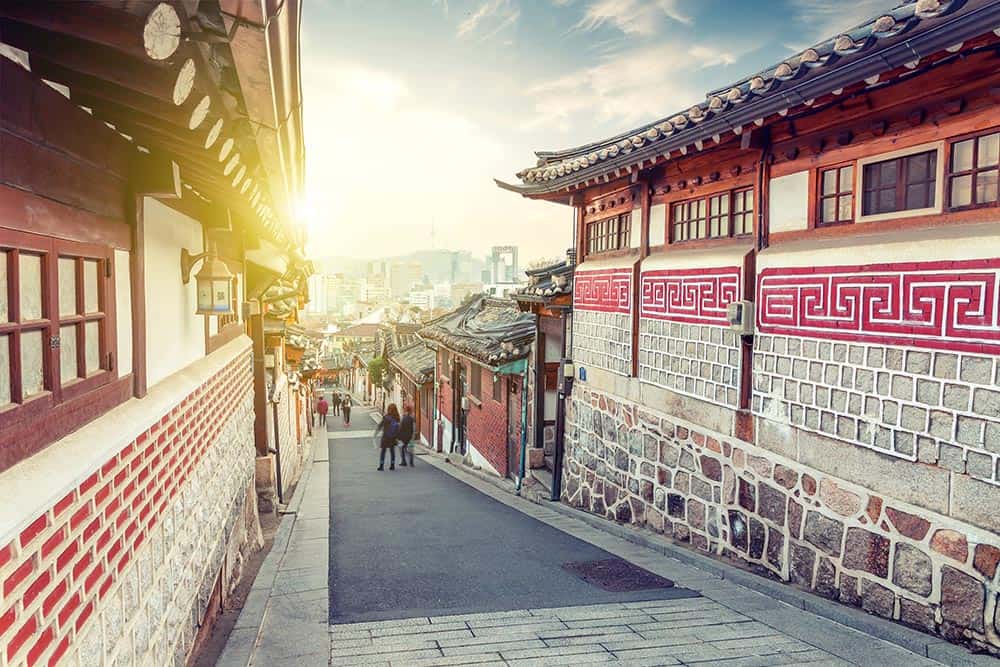 As a wave of development swept through South Korea in the post-war era, Bukchon Hanok Village came at risk. It was slated for demolition to clear the way for new modern buildings.

Fortunately, a persuasive group of locals made a good case for keeping the area intact. The municipality backed down, deciding, instead, to preserve Bukchon Hanok Village as a historical area.

Today, it still teems with action.

The hanok aren’t exactly what they once were. The renovated residences now blend traditional styles & materials with more modern ones.

They’re still beautiful though. Some of the most atmospheric hanok now house teahouses, museums, workshops, and restaurants. There’s even a few traditional guesthouses in the mix that slot in among the top accommodations in Seoul!

What to do & see at Bukchon Hanok Village

Simply wandering around Bukchon Hanok Village is an experience in itself. Every street unfolds another captivating scene.

As you’d imagine, this tourist area can get a little jammed up. You’ll find the most stunning architectural examples—and the biggest crowds!—in the Gahoe-dong area. The crowds are particular dense in & around the northern section of Bukchon-ro 11-gil.

For a quieter experience, head to the alleyways of Wonseo-dong near Changdeokgung Palace. Samcheong-dong in the northwest is another great option. 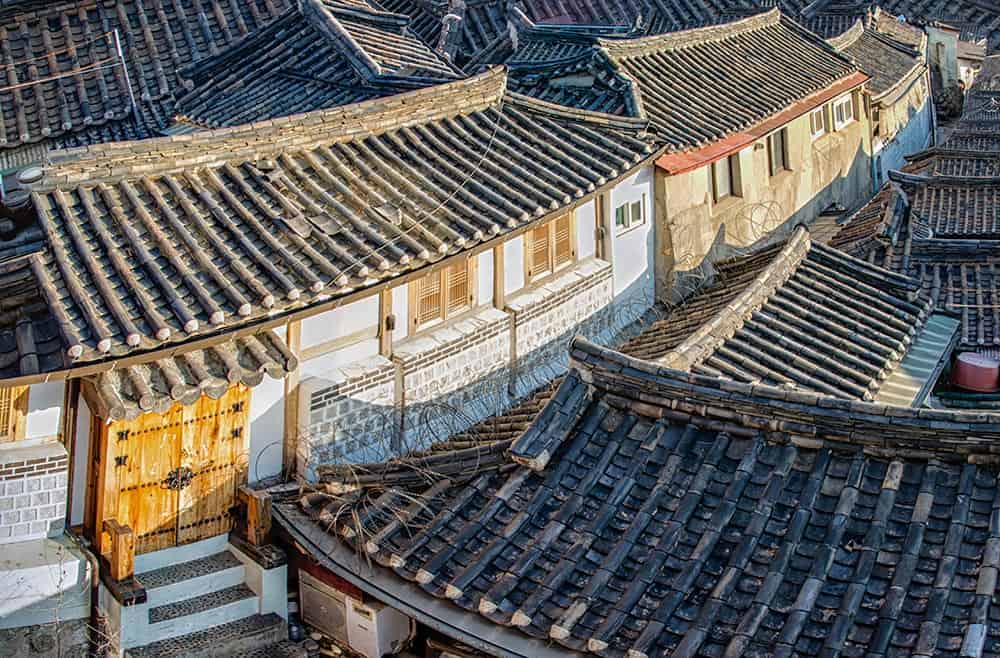 Keep the noise levels down. Don’t take photographs of the inside of the hanok out of respect for the privacy of the owner. (Remember: the hanok are their homes!)

Other than gazing upon the beautiful hanok, here are a few other things to do in Bukchon Hanok Village…

Where to stay in Bukchon Hanok Village

Need to supercharge your Seoul trip? One of the best cultural experiences in Seoul is to stay in a traditional hanok guesthouse! Here are a few of the best places to stay nearby…

How to get there

To get there, take Line 3 on the Seoul metro to Anguk Station. From Exit 2, it’s about 300 metres up Bukchon-ro (about 10 minutes by foot) to where the main hanok areas begin.