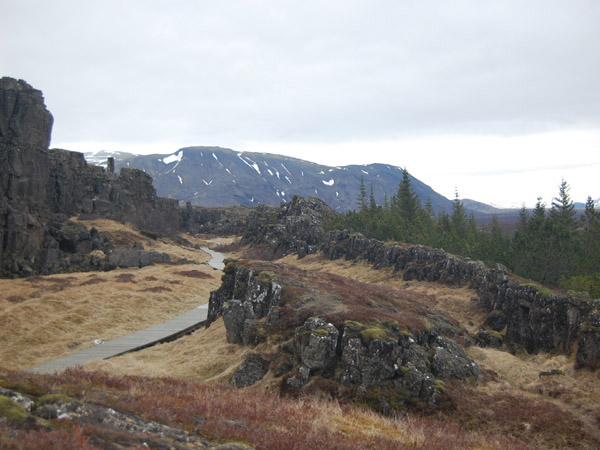 Sitting on the meeting spot of the North American and Eurasian continental plates, Iceland is home to some spectacular geological features. Glaciers, geysers, fjords, mountains, volcanoes, lagoons, lava fields, and black sand beaches are just a few of the natural phenomena you can see on a trip to this fascinating Nordic country. Best of all, on a trip through the country’s Golden Circle, you can see numerous geological wonders, either on your own or as part of an organised tour. Whichever option you choose, just be sure to have plenty of batteries and memory cards for your camera!

The Golden Circle is located in the southwest part of Iceland, relatively close to the capital city of Reykjavík. The circle is a popular tourist route encompassing Thingvellir National Park, the Haukadalur geysers, and Gullfoss Waterfall. Despite being one of the most popular travel routes for tourists, the locations are grand enough that it’s possible to still enjoy their beauty without constant interruption from other visitors.

When starting out from Reykjavík, most people head first for Thingvellir National Park. The 240-square kilometre park is the site of the original Icelandic parliament that was formed in 930. The park is also a great place to see the Northern Lights. Thingvellir, or Þingvellir as it is known in Iceland, is where the two continental plates meet, but they’re slowly moving together. As a result, they have created some truly spectacular geological valleys and hills. They’re also responsible for the multiple earthquakes each day. Fortunately, most are never felt.

The park also includes Lake Þingvallavatn and its surrounding area, which is popular for horseback riding, hiking and other outdoor sports. Of course, there’s the lake itself, which boasts some of the clearest water in the world. Divers can enjoy the watery wonders, but even snorkelers can take in the sights of the mid-Atlantic rift.

The Haukadalur valley that is part of the Golden Circle is home to some truly impressive geothermal activity. There are numerous geysers in the valley, including Geysir, the geyser from which we take the English word. The reason it lent its name to all other geysers is because it was the first recorded geyser, dating back to 1294. It probably formed as a result of one of the many earthquakes in the area. Over the centuries, its activity has waned, and ironically, it has become a geyser that rarely erupts. Fortunately, the nearby Strokkur geyser is much more reliable, bubbling and shooting hot water into the air every 5-10 minutes. You’ll be sure to see an amazing geothermal show!

Finally, as you finish off your tour of the Golden Circle, you come to the Gullfoss Waterfall. Just a short distance from Geysir is Gullfoss, a massive waterfall that impresses just about everyone who sees it. Also called the Golden Falls, this spectacular waterfall is created by the Hvítá River as it plunges 32 meters down into a crevice. Before it reaches the falls, the river takes a sharp turn where it appears to flow over three descending steps toward the falls. The combined angles and drops make this one of the most stunning and unusual waterfalls in the world.

However, to truly see the waterfall, you need to hike down the path that leads to the crevice. The hike down and back can take about an hour in total, but it’s worth it for the amazing view of water and earth colliding.

Although it is possible to see all three of the main sites in one summer day, many people suggest at least one more day so that you can really stop and take in more of the incredible scenery throughout the Golden Circle route. The numerous natural phenomena should be savoured, rather than rushed.