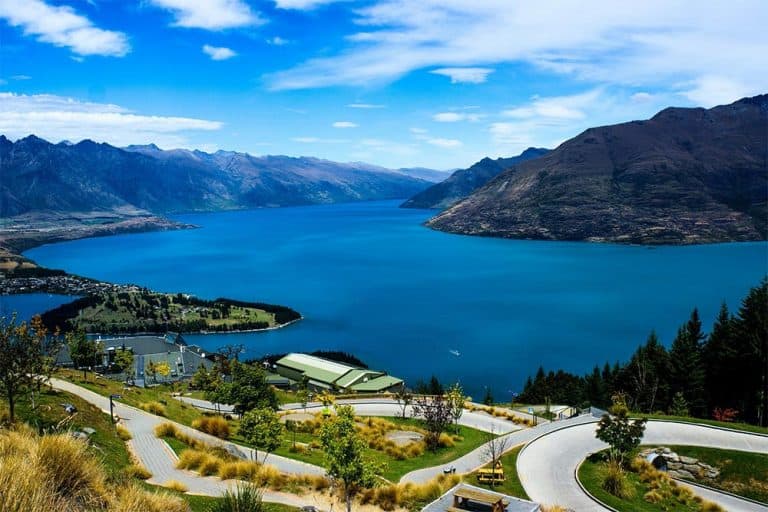 Queenstown is one of New Zealand’s most magical places to visit. And much of its majesty radiates from its location on the shores of Lake Wakatipu.

Lake Wakatipu is the longest lake in New Zealand and its third-largest. (Only Lake Taupo and Lake Te Anau have it beat.) Even without its myths & legends, Lake Wakatipu is a spectacular place to visit. Upon its shores and waters, you’ll enjoy all the adventures Queenstown is famous for. Nearby, you’ll find outfitters offering adrenaline-pumping activities. Skydiving, skiing, paragliding, and bungy jumping are all par for the course. Several excellent hiking trails also crawl along or from its shores.

Long before its modern history, Lake Wakatipu was steeped in legend. The lake’s name even comes from it. In the Maori language, Wakatipu translates to “the trough of the giant.”

The legend begins with Matakauri and Manata, a young couple. On night, a giant ogre (taniwha) named Matau snuck into the village and kidnapped Manata. Bravely, Matakauri set out into the mountains to find Matau. After a long search, Matakauri found Manata and freed her while Matau slept. 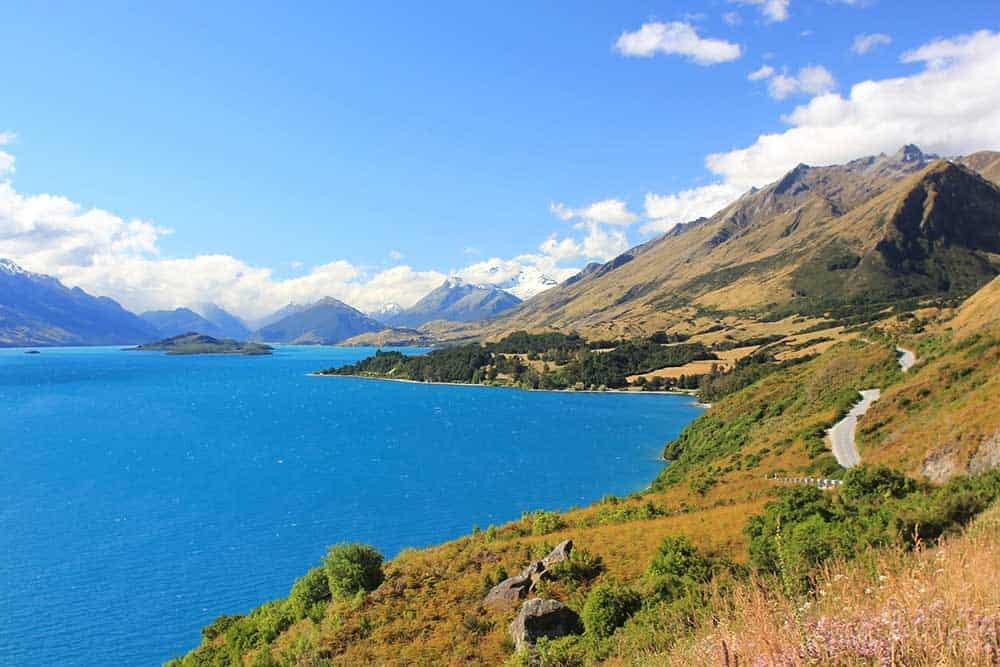 Knowing that Matau would take revenge, Matakauri decided to end the feud for good. Matakauri returned to the mountains, and while Matau was asleep, set the bed ablaze. As the giant’s body burned, it created a gaping hole in the earth. Soon, the trough filled with run-off and rain. Lake Wakatipu was born.

After Matau’s death, only his heart remained in the lake basin. The rhythmic rise and fall of its waters is said to be left from the ogre’s heartbeat.

Geologists speculate that Lake Wakatipu was formed more than 15,000 years ago by glacier. The first known exploration of the lake didn’t happen until 1859. (Of course, it was likely known to the Maori for centuries by this point.)

Queenstown was the first settlement of Lake Wakatipu, sitting on the northern shores of the lake’s characteristic bend. The town was set up as a camp for miners finding fortune during the 19th-century Otago gold rush. 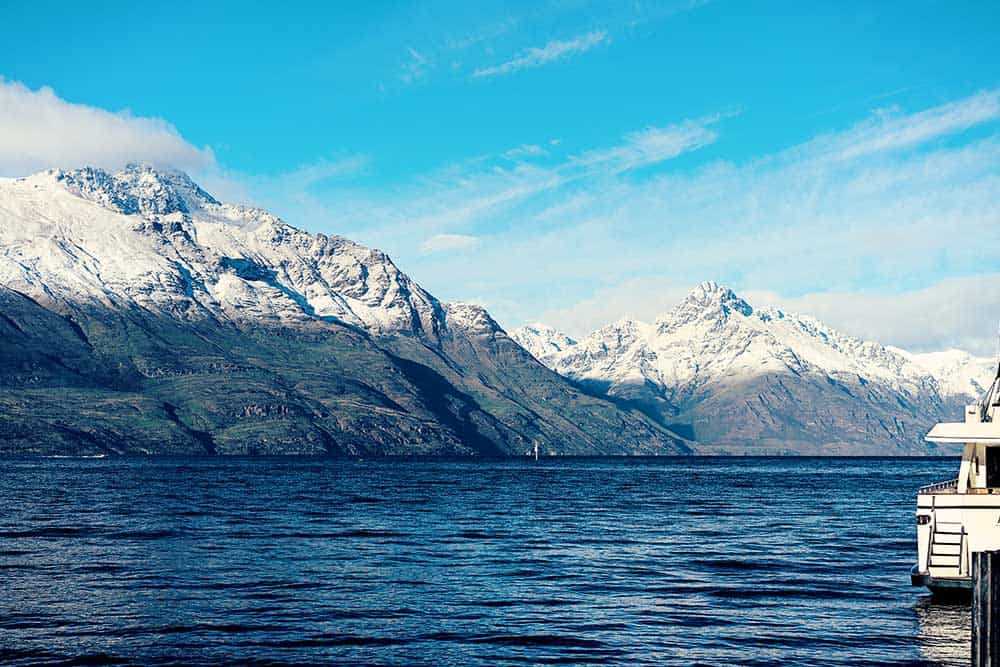 In the north, Lake Wakatipu is fed by the Dart River, and to a lesser extent, the Rees River. Not far from Queenstown in Frankton, the lakewaters empty into the Kawarau River. Past its outpouring point, the lake continues about 20 kilometres further south. The town of Kingston sits on its southernmost tip.

With its powerful feeder rivers and squeezed exit, Lake Wakatipu is prone to flooding. Fortunately, it’s been awhile. The most recent Queenstown floods were in 1999. Much of the CBD had to be shut down for several days before water levels receded.

Ready to kick your visit into overdrive? Seek some of these top Lake Wakatipu activities & attractions…

Of all the things to do on Lake Wakatipu, none is more popular than the Spirit of Queenstown Scenic Cruise. The boat tour whisks you from the heart of downtown Queenstown to the small town of Glenorchy in the north. 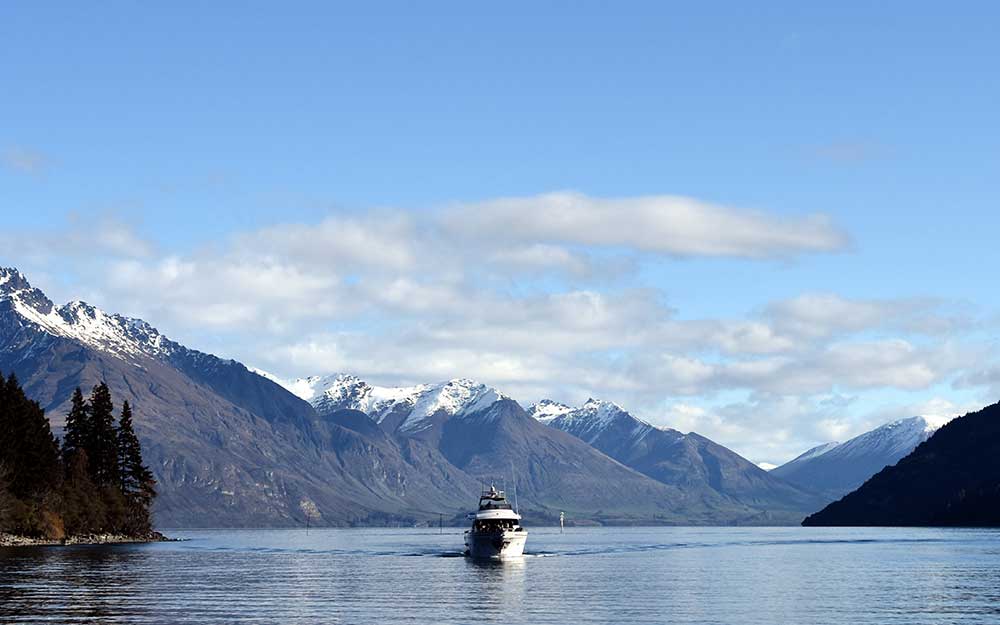 As you trawl along the lakeshore on a Queenstown Scenic Cruise, you’ll enjoy incredible views of the Southern Alps. You’ll experience the finest scenery on the boat’s top viewing deck. On a chilly day, you’ll also have the option to hang out in the inside cabin. You can even grab a drink at the fully-licensed bar!

The bucolic town of Glenorchy sits at the northeastern head of the lake, near the confluence of the Dart and Rees Rivers. With its lovely natural setting, it’s one of the best Queenstown day trips.

These day, Glenorchy is most famous among visitors as a major filming location for The Lord of the Rings trilogy. But there’s plenty to do here than spotting Middle-earth scenery. 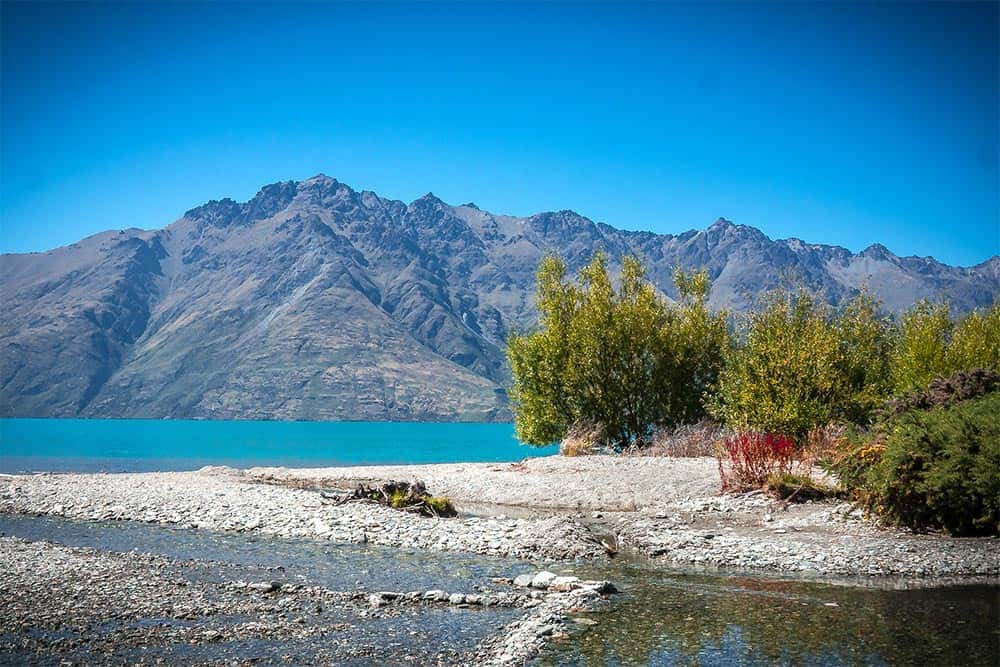 The town is home to some of the best walks around Queenstown. The trailhead for the Routeburn Track, one of New Zealand’s Great Walks, is close to town. In Glenorchy, you’ll also enjoy outdoor adventures like horseback riding, jetboating, and canyoning.

The 45-minute drive from Queenstown makes for a beautiful road trip. Of course, travelling to Glenorchy by boat is a magical option, too. 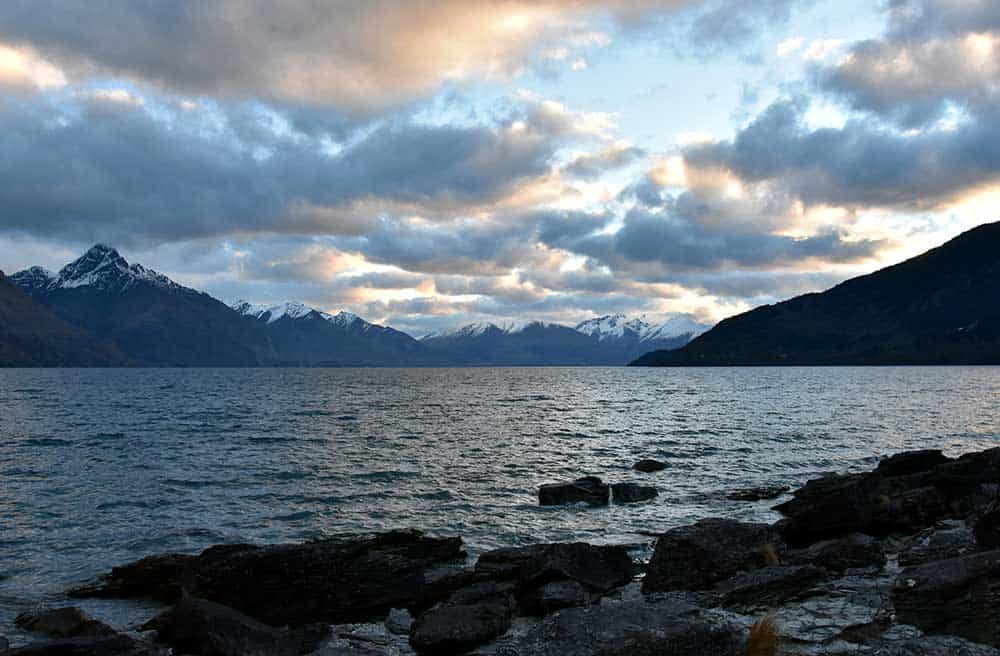 Along the way, you’ll enjoy views of Lake Wakatipu, Queenstown Bay, and The Remarkables mountain range. If you’re tight on time, consider biking the route rather than walking.

The Frankton Track & Kelvin Peninsula Trail form part of the Queenstown Trail. Extending 110 kilometres, the epic trail whisks past many of Queenstown’s top tourist attractions. Plan for a longer day of hiking or mountain biking to see lakes, wineries & vineyards, and historic towns like Arrowtown.

In the country that invented bungy-jumping and jetboating, an activity like Hydro Attack shouldn’t shock you. If you want to take the adrenaline up a notch on your Lake Wakatipu visit, this is the activity to get ‘er done. 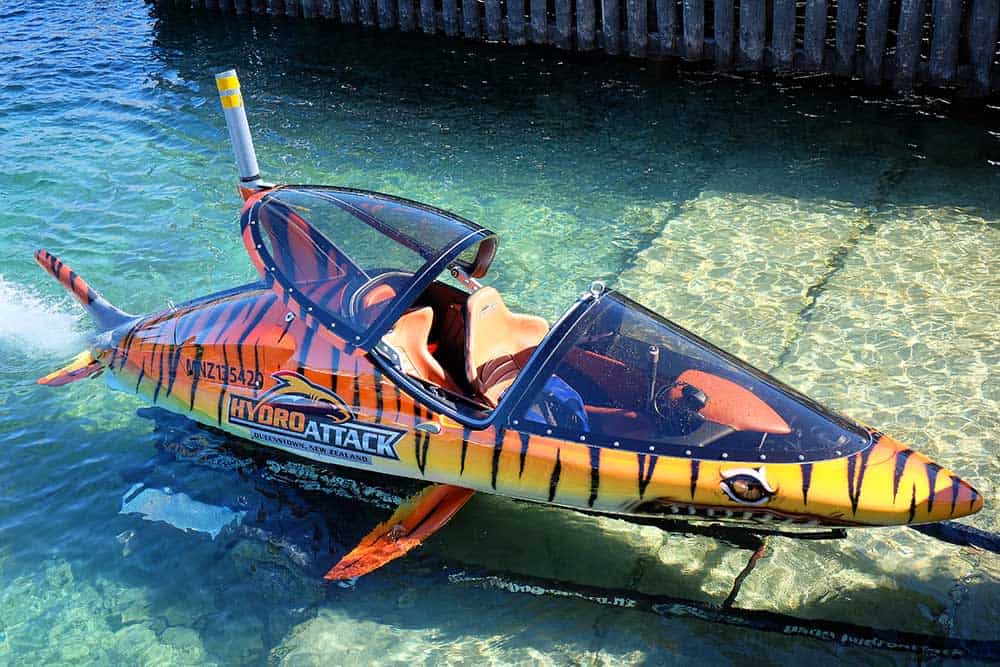 Strap in for a hair-raising experience as you enter into the small submersible jetboat. The capsule zips you across the water surface at speeds up to 80 kilometres an hour before diving into the water. After a quick underwater sightseeing adventure, it propels you straight out of the water like a rocket blasting off into space. (And did we mention it’s painted like a shark? Oh ya, that, too.)

PRO TIP: This activity is super popular in tourist season. Be sure to book your Hydro Attack tickets online to save your spot.

Rather see Queenstown from (way) up above? Drift 9,000-feet into the air for a tandem skydive over Lake Wakatipu. If you’ve ever wanted to battle your fear of heights (or embrace it), this is your chance! 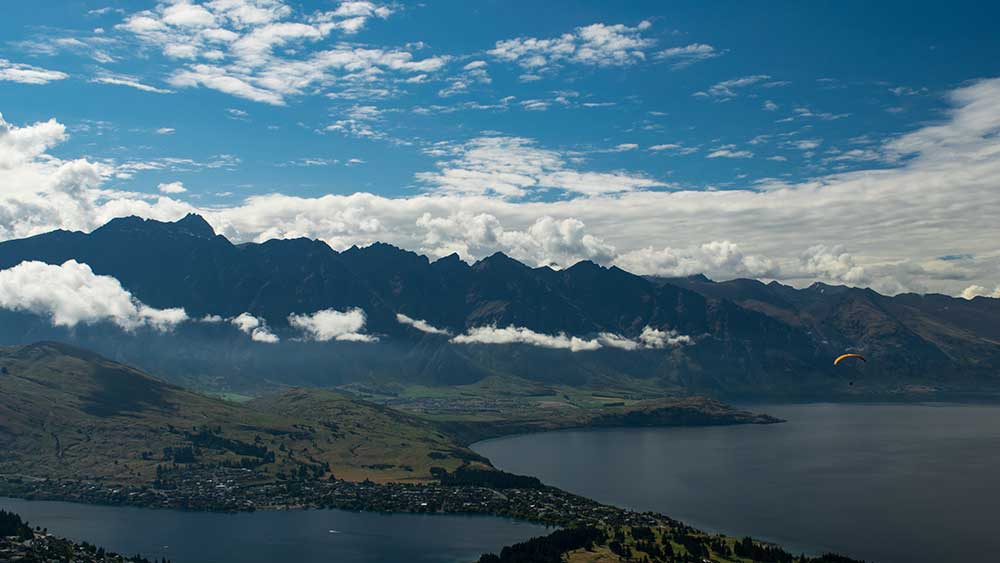 On an NZONE Skydive, you’ll experience a heart-pumping 25 seconds of freefall before settling to a 5-minute canopy ride. Don’t forget to keep your eyes open; you won’t want to miss this scenery.

PRO TIP: Save your spot in line and book your tandem skydive experience online.

Where to stay near Lake Wakatipu 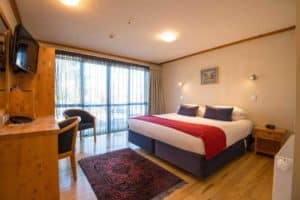 The 4-star Coronation Lodge is located in the heart of central Queenstown. It offers excellent value accommodations that won’t break the bank. Rooms here are well-appointed, clean, and comfortable. Upgrade to a deluxe room to enjoy your own private balcony. The lodge is two-minutes from the lakeshore. 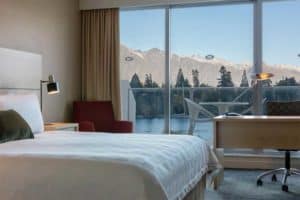 The superb Crown Plaza Queenstown is central to both the city and the lakeshore. It’s a quick 4-minute walk to the beach. All the rooms feature a balcony, some offering spectacular lake views. Settle in for a night at the on-site restaurant, serving delicious international cuisine. 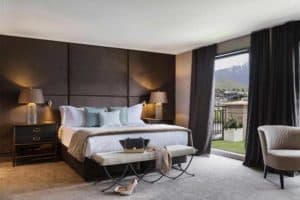 One of Queenstown’s top luxury hotels, the elegant Softitel Queenstown Hotel & Spa is a wonderful choice for your South Island visit. The rooms are fitted with luxurious extras that show off the brand’s French influences. Indulge in a treatment at the on-site spa to chill out after a long day of sightseeing on NZ’s largest lake.