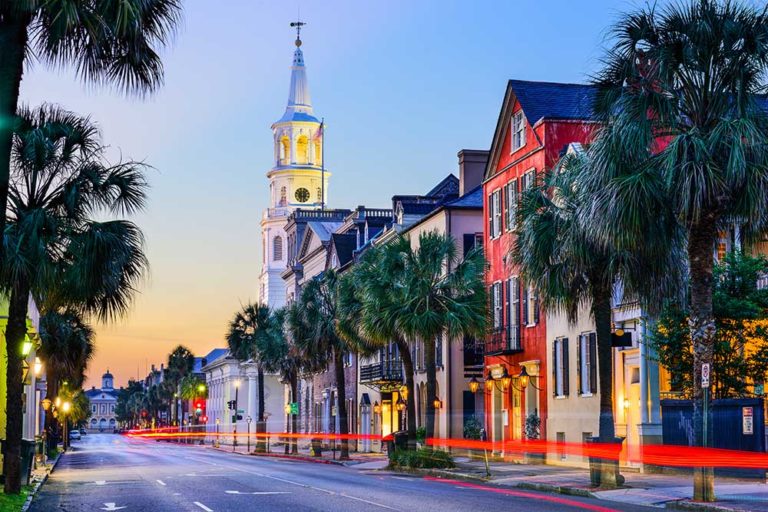 Planning the perfect Southeast USA itinerary? Toss in at least one day in Charleston, South Carolina. Nicknamed the “Holy City,” historic Charleston is the state’s largest city and one of the South’s biggest urban surprises.

In your first 24 hours in Charleston, you’ll wander cobblestone streets alongside historic houses. Along the city’s waterfront, you’ll enjoy views over the harbor and its islands. You’ll roll through public markets that sit among the oldest in the United States. And, to top your Charleston itinerary off, you’ll enjoy Southern food & drinks in restaurants & pubs dating back centuries.

Ready to figure out where to go in Charleston in one day? Get started with this complete 1-day Charleston trip plan.

Looking for more ideas for your trip? Check out our other city itineraries and our USA Travel Guide and South Carolina Travel Guide for more recommendations on when to visit, where to go & what to do!

Where to go in Charleston in one day: A complete 1-day itinerary

Feeling extra ambitious? Wake up early to start your one day in Charleston at White Point Garden. The park sits on the southeastern tip of “The Peninsula.” It’s one of the best places in downtown to watch the sunrise from Charleston Harbor. 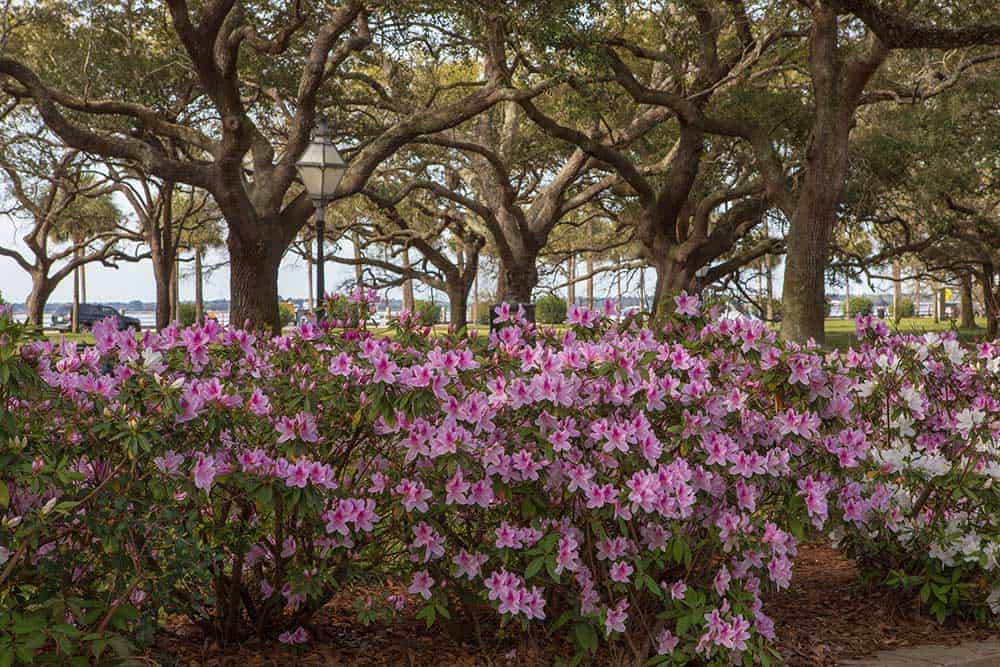 White Point Garden is also a boon for military history buffs. The garden features several Civil War cannons and military monuments & statues. Walk around in the shade of its oak trees, coffee in hand, to check it all out in stride.

Stroll along the Battery

From White Point Garden, walk north along the Battery. The landmark defensive seawall is one of the top tourist attractions in Charleston, offering some of the city’s finest views.

Strolling on the Battery, you’ll walk past elegant antebellum houses. These gorgeous homes offer a first taste of what’s to come during your first 24 hours in Charleston. 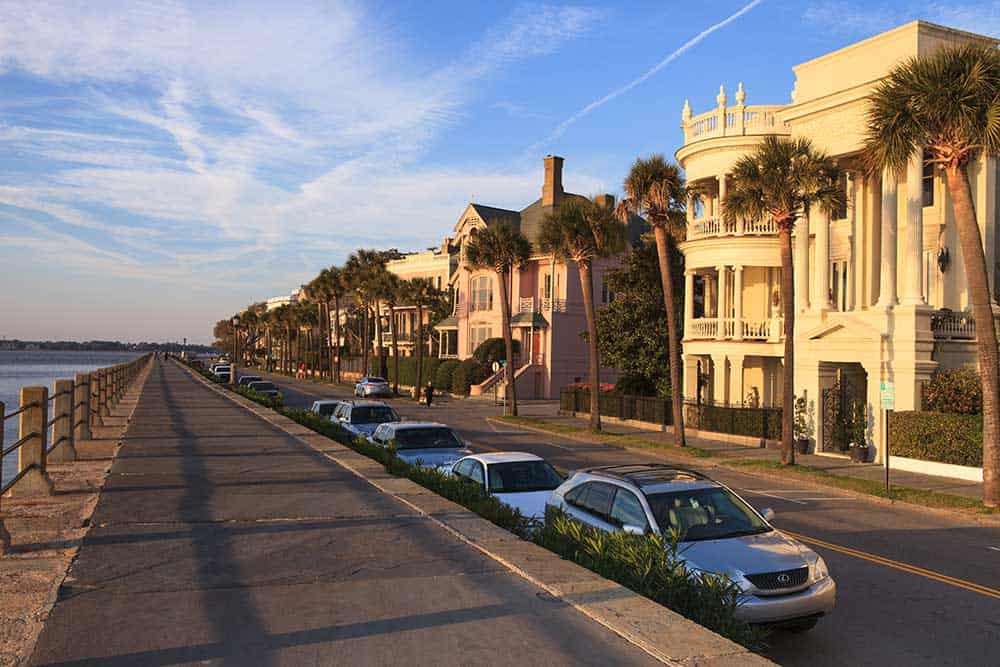 You’ll spot several standout buildings along East Battery. Architectural gems on the stretch include Robert William Roper House and Edmondston-Alston House. If you’re not visiting too early in the day, you may be able to pop in for a quick tour.

From the High Battery, you’ll also marvel at spectacular views over the harbor. On a clear day, you’ll even see as far as Fort Sumter and Sullivan’s Island.

When you reach the top of the High Battery, walk east along Water Street. At Meeting Street, stroll one block north. Soon, you’ll catch a glimpse of Nathaniel Russell House, one of Charleston’s most stately historic homes. 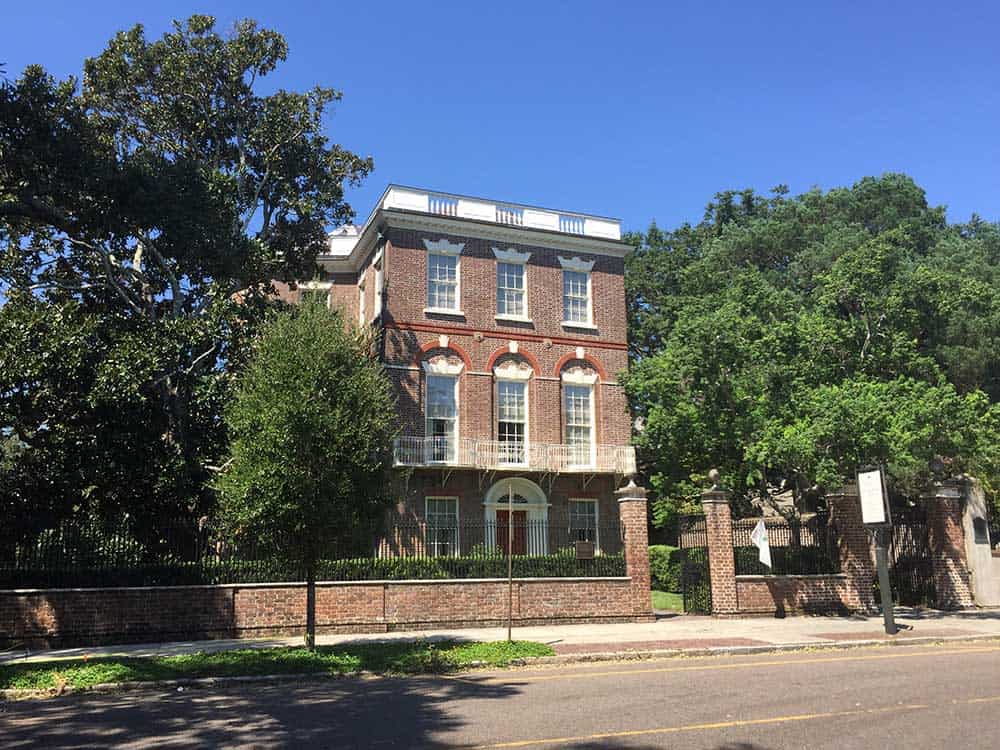 Built in 1808, Nathaniel Russell House is one of the country’s most well-preserved neoclassical homes. Its graceful interior centers upon a striking three-story, cantilevered spiral staircase. Touring its grand rooms, you’ll dazzle at ornate plasterwork and the restored period furniture & artwork.

Nathaniel Russell House offers tours between 10pm and 5pm from Thursday to Sunday.

Add color to your trip at Rainbow Row

From the house, wander one block north to Tradd Street. Walk east until you’re stopped in your tracks by East Bay Street. To the north, you’ll spot one of the top places to see in Charleston, Rainbow Row. 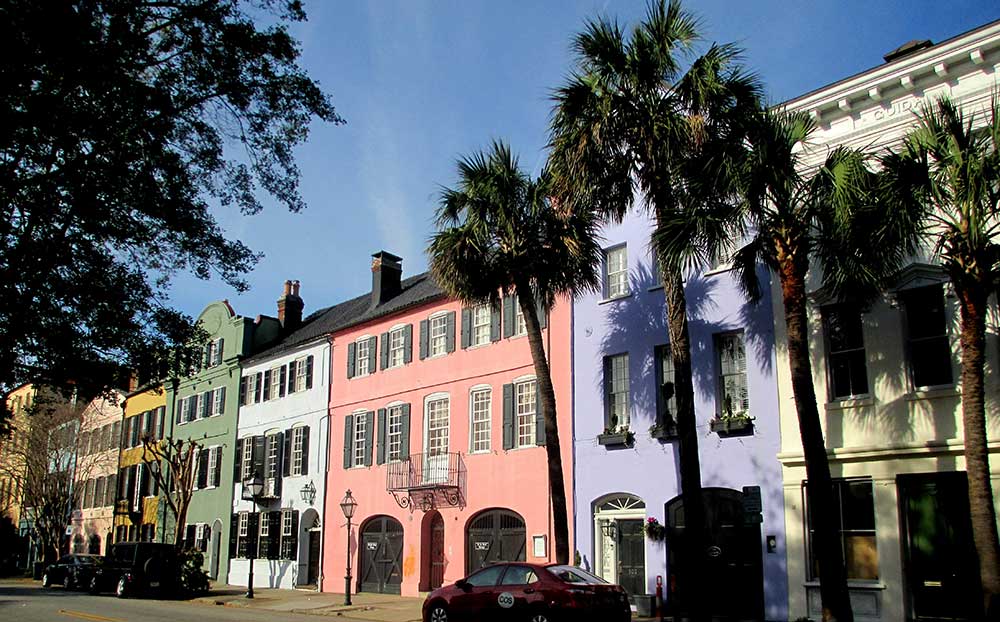 The collection of 13 pastel-hued Georgian townhouses date between 1748 and 1845. They show off Charleston’s Historic District at its most colorful.

Word of warning: the “wow factor” of Rainbow Row lacks for some travelers. Even so, it’s a short detour on your walking tour of Charleston in one day. Check it out. It might just brighten your day.

Check out the Old Exchange and Provost Dungeon

Walk a block north to East Bay Street and Broad Street. On the street’s eastern flank, you catch a glimpse of the Old Exchange and Provost Dungeon.

Built in 1771, the Old Exchange and Provost Dungeon pre-dates the republic itself. Over its history, it’s served every level of government—colonial, federal, municipal, and state. The building is one of the most important landmarks in Charleston’s history. 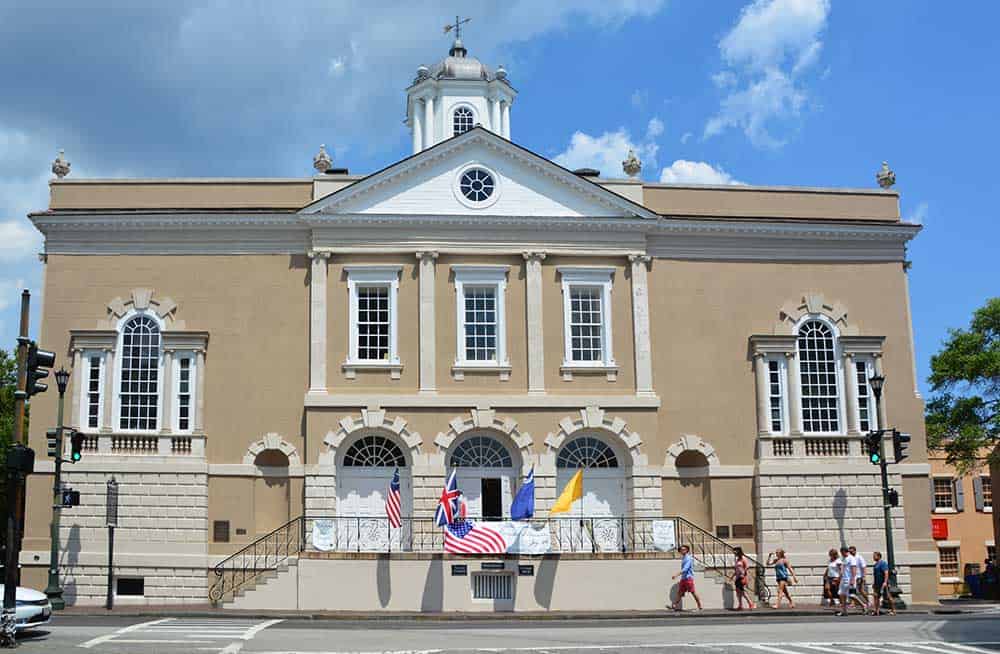 The top two floors offer self-guided exhibitions that scroll through the site’s history. Be sure to carve out time to visit the Provost Dungeon, located in the cellar. The dungeon served as British military prison during the American Revolution.

Admission to the Old Exchange and Provost Dungeon is $10 for adults and $5 for children between 7 and 12. (Children under 7 are free.)

Built up an appetite? Travel west along Broad Street a block and a half. Relax your legs with lunch & drink at the Blind Tiger Pub.

Like so many places in the Southern city, a long story lies behind the Blind Tiger Pub. Although the pub itself only dates back to 1992, its building was built in 1803. The pub’s design pays homage to the city’s prohibition-era speakeasies, called “blind tigers.” 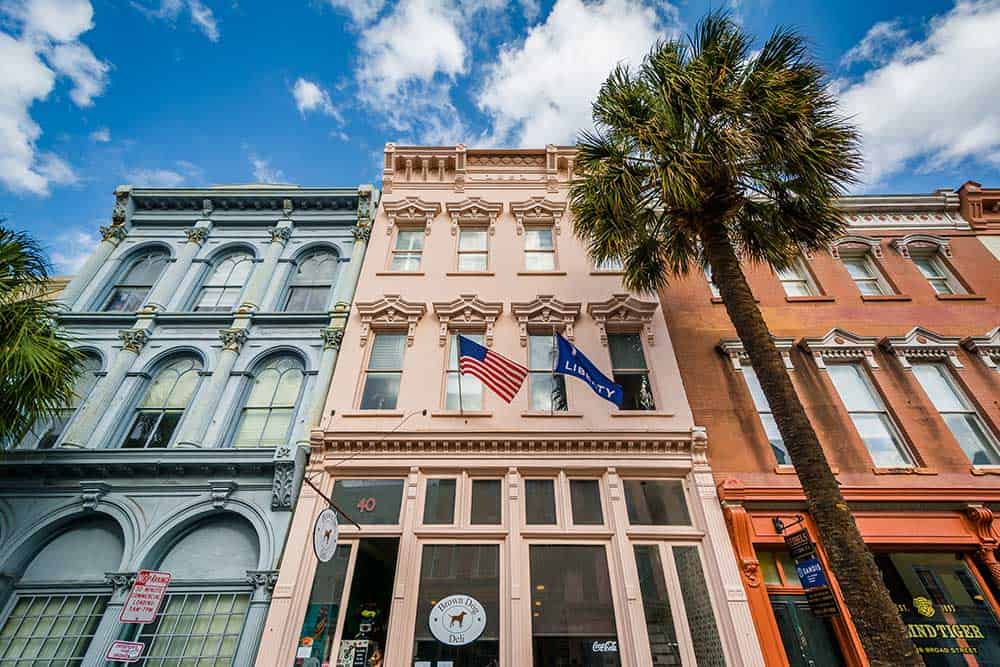 Since opening, the Blind Tiger Pub has garnered several accolades. With its graceful courtyard, it often lands atop lists of Charleston’s best outdoor patios. (To add to the intrigue, the pub is often reputed to be haunted. Maybe we’ll save that story for a ghost tour instead, ya?)

To be sure, there’s better food elsewhere in downtown Charleston. But in the area, it’s hard to beat this historic pub. If you’re not famished, you’ll find plenty more options later on during your 1-day Charleston itinerary.

Fuelled up for the afternoon? From Broad Street, it’s a short walk to the Old Slave Mart Museum. Visiting this important National Historic Site is a must for any trip to Charleston. 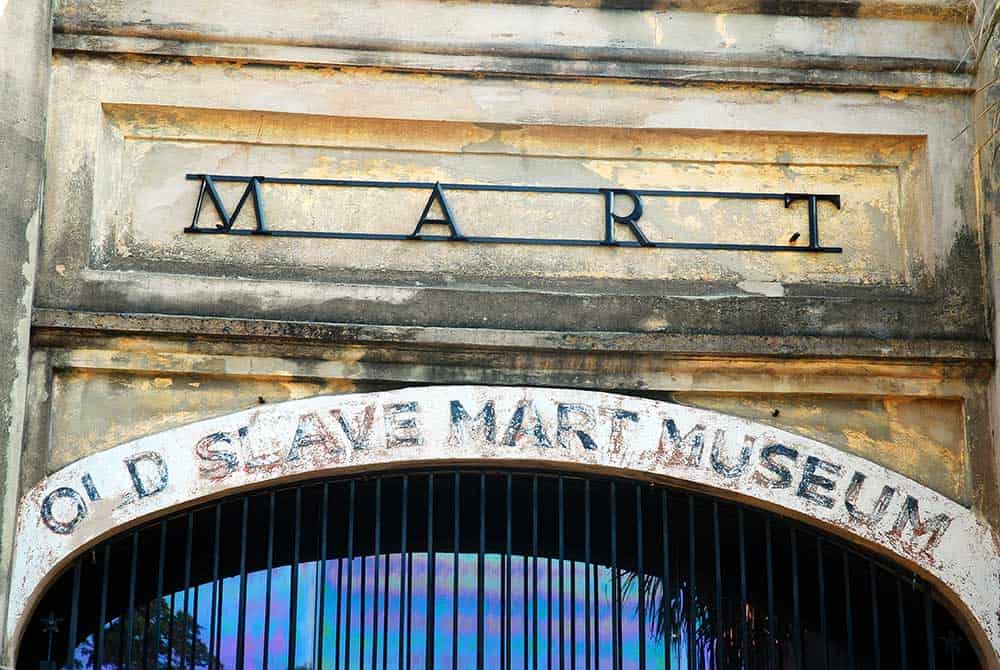 The Old Slave Mart Museum tells the dark history of Charleston’s slave-trading days. At its height, as much as 40% of all US slave trade passed through South Carolina’s biggest city.

To get the full experience, plan to spend an hour reading through its educational exhibits.

Soak up the views at Ravenel Waterfront Park 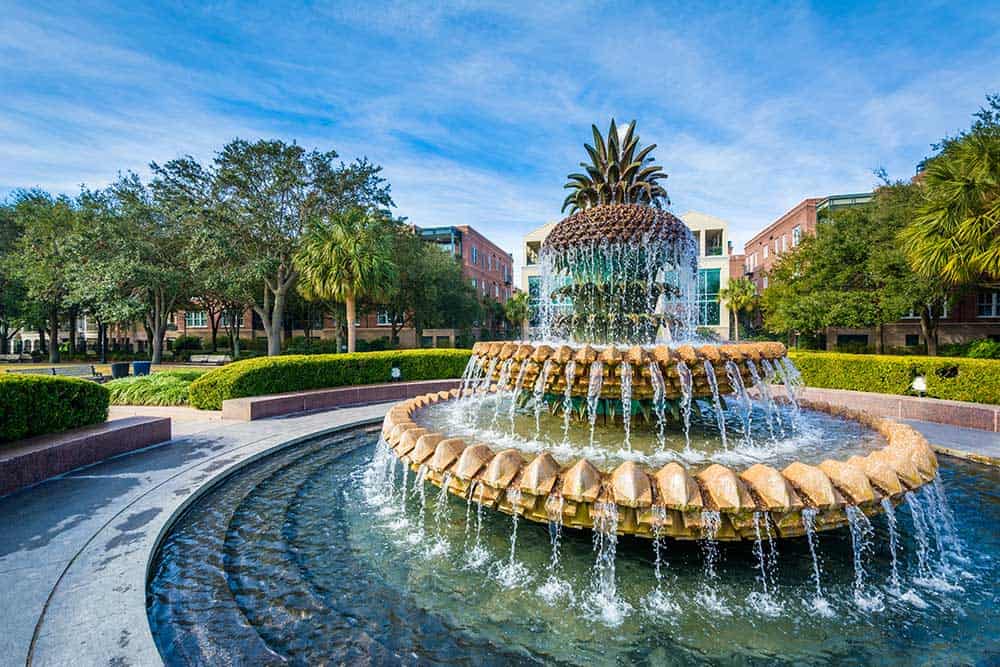 Take a breather while meandering along its boardwalks. Enjoy the dramatic views of the Cooper River, the 1,546-foot cable-stayed Ravenel Bridge, and the U.S.S. Yorktown.

On your stroll, keep on the lookout for the Pineapple Fountain. It’s the park’s most Instagrammable landmark!

Wander through history at the Historic Charleston City Market

Downtown Charleston’s cultural heart beats at the Historic Charleston City Market. Spanning four blocks, the famous market dates back over two centuries. It’s known as one of the oldest public markets in the United States. 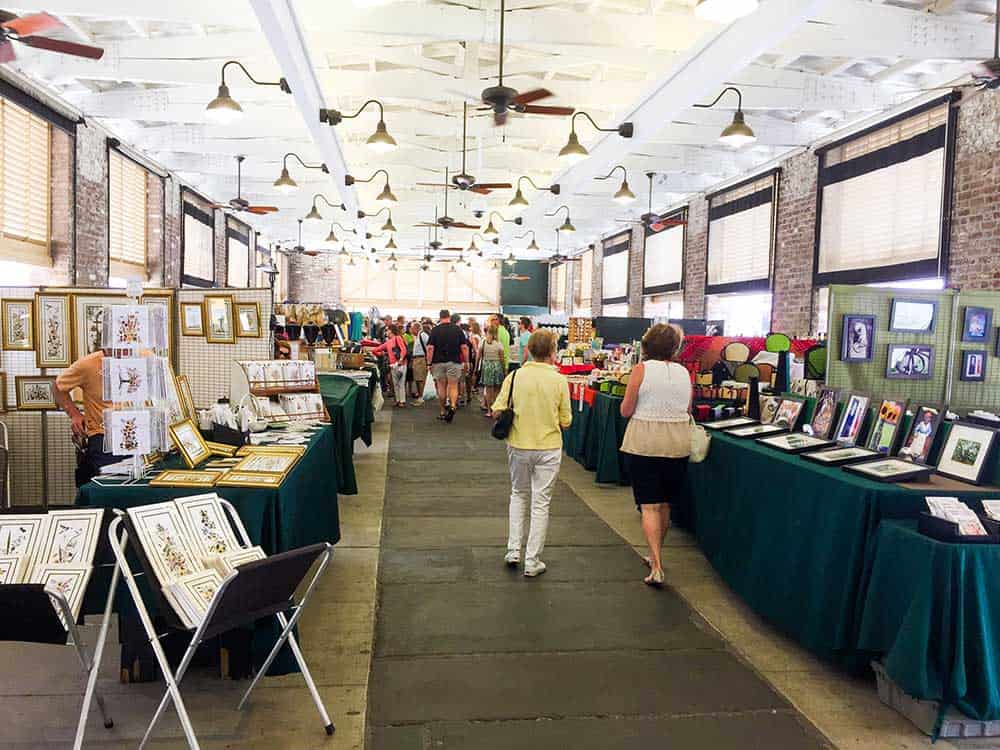 Centered on Market Street, the Historic Charleston City Market hosts over 300 local vendors. Peruse the stalls. You’ll find everything from arts & crafts like sweetgrass baskets to souvenirs to local cuisine.

Once you’re done exploring the market, head west to King Street. The stretch north of Market Street is jammed with boutiques selling everything from clothing to souvenirs.

To uncover some of the best restaurants in Charleston, venture back to East Bay Street. The area south of the United States Custom House has a particularly robust selection.

For upscale Southern food, check out Magnolias or the cheekily-named Slightly North of Broad Restaurant. Or, for more “low-brow” pub food and craft beers, chow down at The Griffon.

Where to stay with 24 hours in Charleston

For first-time visitors, the best area to stay in Charleston is the Historic District. The downtown neighborhood is the safest area in the city for travelers. It’s also home to most of the best hotels in Charleston. 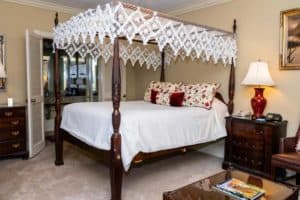 For the ultimate in Southern hospitality, spend a night at this lovely inn. In true SC fashion, the hotel shows off a relaxing historical courtyard for your relaxing pleasure. 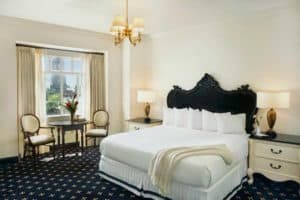 Get a taste of European charm by staying at this comfortable inn. Launch your day of sightseeing with the hotel’s free continental breakfast. 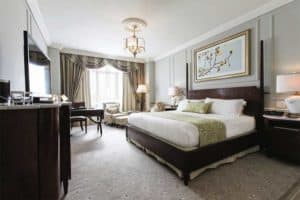 Want to add a dose of luxury to your stay? Book yourself into this luxurious central hotel. Staying here, you’ll enjoy amenities like a fitness center, spa, and two saltwater pools. There are also 7 on-site restaurants & bars to choose from. 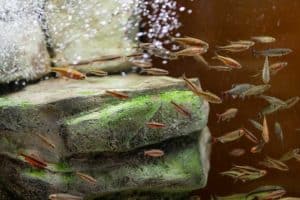 Visiting Charleston with kids? Sneak in a visit to the South Carolina Aquarium. The aquarium is home to more than 10,000 plants & animals. Its 42-foot-high tank is the deepest in North America. 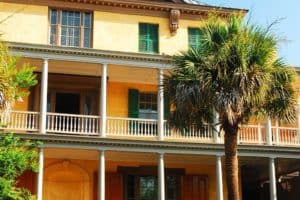 Sitting about a mile north of downtown, Aiken-Rhett House is tough to fit in on a time-crunch. If you’ve got an extra day, it’s worth a gander. As the house is preserved rather than restored, it’s one of the city’s most authentic from the era. 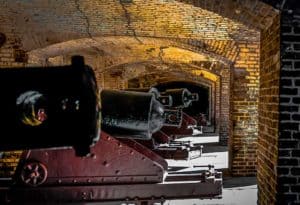 If you’re a Civil War buff, save a few hours to explore Fort Sumter. Accessible with a 30-minute ferry ride, the military fortress is one of the most important in US history. In 1861, it was here that the first shots of the Civil War rang out. 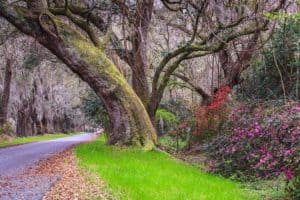 South Carolina is famous for its plantations. And if you can only visit one around Charleston, make it the Magnolia Plantation and Gardens. Famed for its lush romantic gardens, the 464-acre plantation lies about 35 minutes northwest of the city. 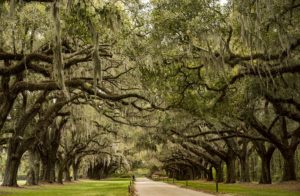 Founded in 1681, Boone Hall Plantation is another one of the area’s most picturesque plantations. You’ll delight in its characteristic 3/4-mile-long oak alley. The plantation is located in Mount Pleasant, about 30 minutes from downtown by car. 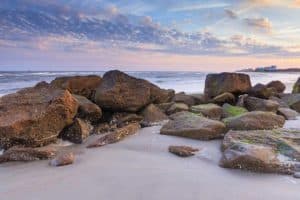 Craving South Carolina’s seaside charms? Venture 25 minutes south to Folly Beach. The small but pleasant beachside city is one of the most popular Charleston day trips. If you’re visiting in summer, cooling off on its Atlantic shorelines is a must!

When to visit Charleston

The best time to visit Charleston is from March to May and September to November. In these months, the weather in Charleston is at its best. You’ll enjoy more comfortable temperatures and drier conditions than other times of the year. Although it’s a busy time of year, especially around Easter, you’ll see the city at its finest. 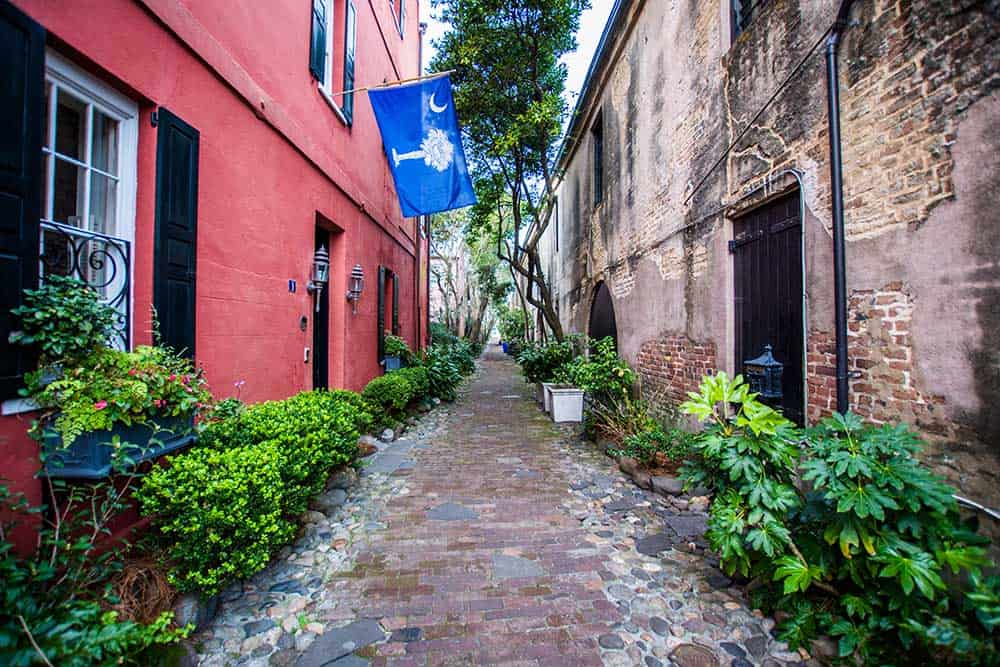 Summer is not a great time to travel to Charleston. In summer, temperatures get blazing hot with high humidity. School’s out and the crowds & prices corroborate it. Summer is also the wettest time of the year.

How to get to Charleston

Charleston is served by Charleston International Airport (CHS). The airport is located in North Charleston, about 12 miles (19 km) northwest of downtown. Several major airlines fly to CHS from other US destinations, including:

Charleston is well-connected by road to other destinations in the Southeast via North Carolina and Georgia. Popular road routes and estimated driving times include: