While Dresden isn’t the biggest city in the country, it’s one of the most important historical destinations in Germany.

After the destruction of World War II, the inner districts of the city were left in ruins. It wasn’t until the fall of the Berlin Wall that the city really got to work restoring its buildings. The skyline is now peppered with elegant towers, spires and domes from the myriad of palaces, state buildings and churches that reside throughout the city.

One day in Dresden isn’t enough time to explore it all. Once called the Florence of the North, the city’s landscape is covered in historic sites. You could spend days touring the various buildings and immersing yourself in their deep rich history.

Not sure where to begin? Start planning your trip with this complete 1-day Dresden itinerary…

What to do in Dresden in 24 hours: A complete 1-day itinerary

Unfortunately, with dozens of things to do & see in Dresden, you won’t get to see all of the city’s standout landmarks.

While you can’t see everything, you can get a good overview of Dresden in just 24 hours. (If you’re really short on time, you can even visit Dresden as a day trip from Berlin or from Prague, although I’d always recommend spending the night here to take advantage of all this Saxon city has to offer.) 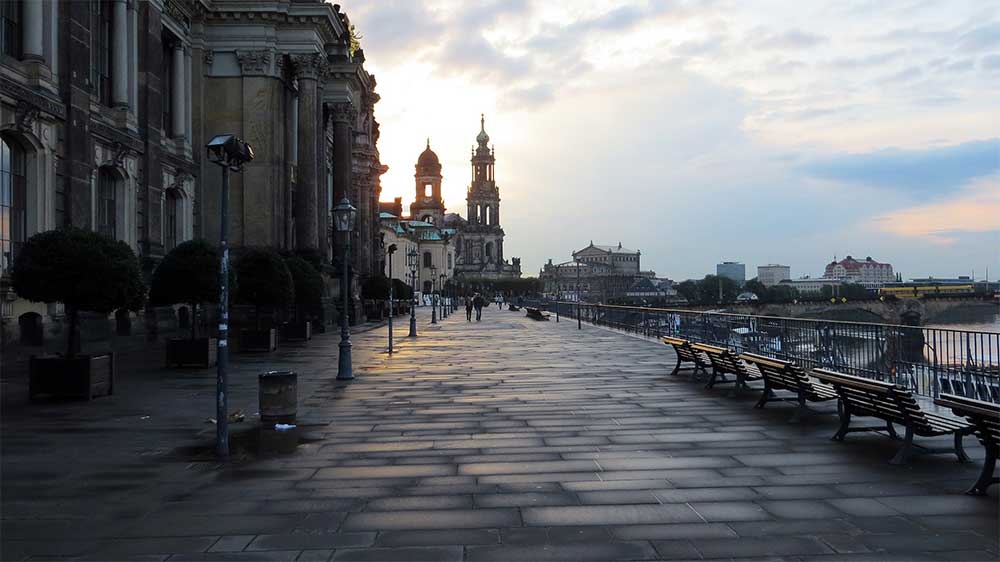 As with most of our travel itineraries, this Dresden itinerary takes you to the most iconic sites in the city, as well as some of the lesser-known areas.

You’ll work your way across the historic city centre, viewing the reconstructed churches and palaces before reaching the outer suburbs. Outside of the old district, you’ll find shopping, dining, and a lively nightlife scene.

PRO TIP: Want to save time and get around Dresden with ease? Grab a Dresden City Card to get free transportation on local buses, trams, and trains and discounts on many Dresden attractions!

Get a view of Dresden’s waterfront from Bruhl’s Terrace

Bruhl’s Terrace provides sweeping views up and down the Elbe River. Nicknamed the Balcony of Europe, the terrace is along the waterfront near the eastern edge of the Inner Altstadt district. 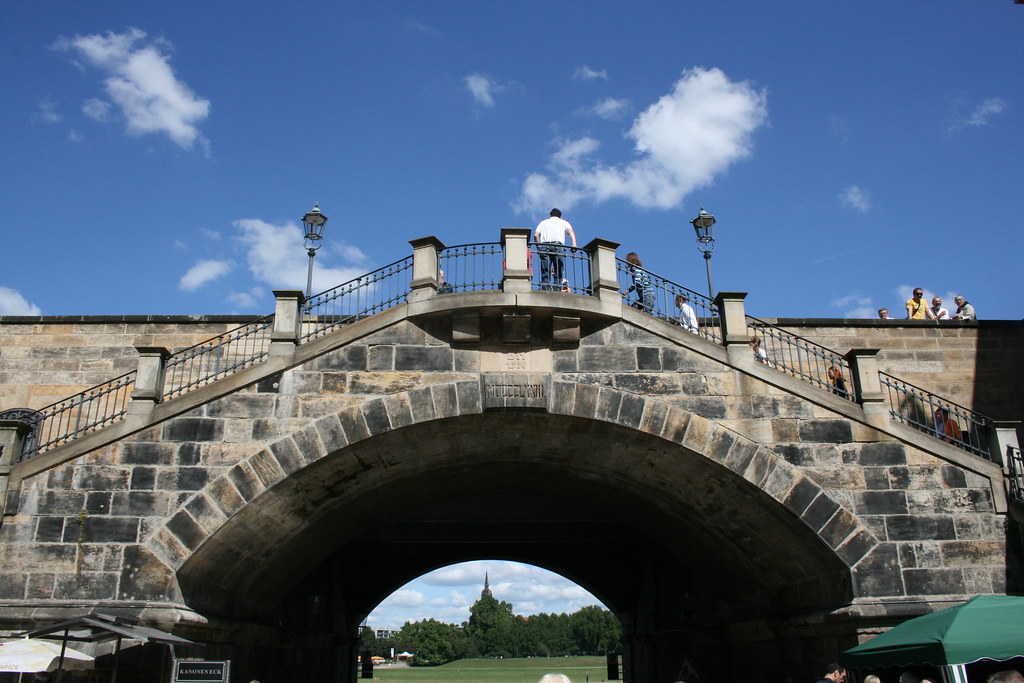 From the terrace, you can look across the river and see historic architecture lining the streets of Neustadt. If you come back to Dresden for a longer trip, try to explore the Neustadt district. It’s got a few notable sites of its own, including several old museums.

The terrace doesn’t offer much beyond the best vantage points in the city. Stroll along the waterfront, check out the views, and continue your journey.

Fill up on pastries and cakes at Dresdner Kaffeestubchen

Directly behind the terrace, you’ll find the sprawling complex that houses the Dresden Academy of Fine Arts. Walk around the left side of the building to reach a small, unassuming side street and follow the smell of fresh-baked goods to Dresdner Kaffeestubchen.

Dresdner Kaffeestubchen serves homemade cake, including a local specialty called Eierschecke cake. It comes filled with cheese, poppy seed, or cherry. The tasty treat should give you enough energy to make it through the morning. If you need an extra jolt, order coffee and egg liqueur.

The café opens at 9 am and becomes quite busy within an hour or two. If you want to avoid a long line, try to reach the café from the terrace just as the doors open.

Step inside the restored main hall of Frauenkirche Dresden

After you finish washing down a cake or pastry with coffee, start walking west on the street behind the café. At the end of the street, you’ll see the front façade of the restored Frauenkirche Dresden. 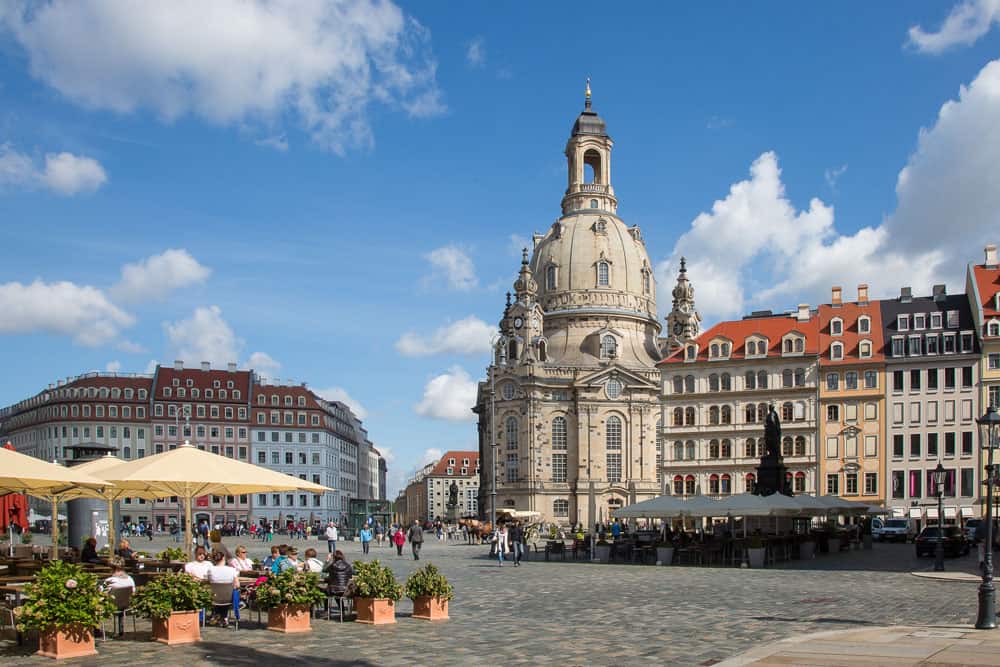 If you’re trying to find the most important historic sites for your Germany itinerary, you need to visit Frauenkirche. The church was severely damaged during Allied bombing raids at the end of World War II.

For decades, Soviet-backed East Germany refused to rebuild the ruins. After the reunification of Germany, the city started restoring the church and many other historic sites in the city centre.

The baroque architecture of the church and its large dome topped by a tower stand out against the more modern buildings surrounding it. When you get inside, you’ll see a large main altar with the typical ornate furnishings and décor.

If you’re lucky, you can take a trip below the church to the crypt. Instead of the remains of the dead, you’ll sometimes find live music.

PRO TIP: Want to save money on your visit to Frauenkirche? Pick up a Dresden City Card to get free transportation throughout the city and free or discounted admission to many of the top attractions including the Frauenkirche’s dome.

Walk the length of the largest porcelain mural at Furstenzug

Behind the church, you’ll see the large Dresden Higher State Court House on the other side of a public square. Walk to the left of the courthouse to find Furstenzug – The Procession of Princes.

As it stands over 10 metres tall, you’ll need to crane your neck to take in the detailed artwork. This is also one of the few historic sites to remain relatively undamaged from the bombing of Dresden.

You’ll also typically find vendors selling porcelain plates and other souvenirs if you feel tempted to pick up a few mementos.

PRO TIP: Want to make the most out of your visit to Altstadt? Hop onto the Dresden Old Town Historical Walking Tour to discover the illustrious history of Saxony’s capital!

Climb down to the tombs inside Dresden Cathedral

When you reach the end of the Procession of Princes, you should see the tower of the Dresden Cathedral. You’ll also pass Schlossplatz, a popular city square. Unfortunately, when trying to see Dresden in one day, you’ll need to skip a few attractions. 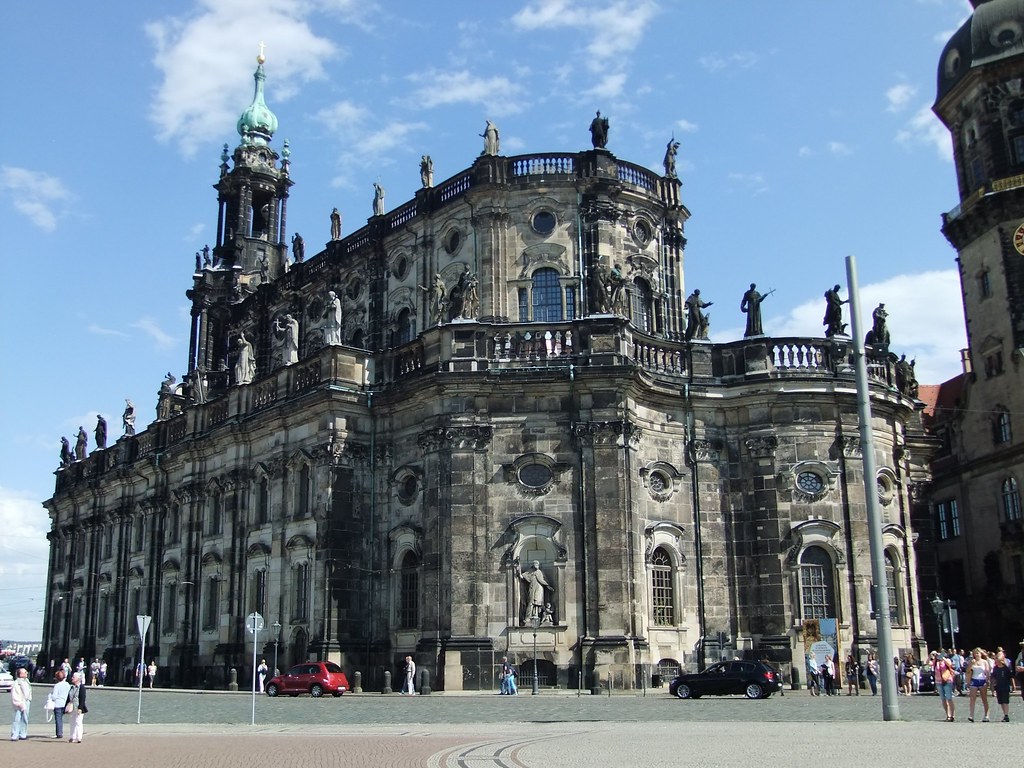 The interior isn’t covered in religious décor. It’s relatively plain, yet still impressive due to its size. After walking through the doors, your eyes immediately go to a large painting of Christ ascending into the sky.

When you get to the cathedral, pay attention to the mass times posted near the entrance. As it is an active Catholic church, you can’t tour the interior during mass.

If you show up when the church is in session, explore the exterior. You can spot various elevated statues of saints around the façade.

Tour the various museums that belong to the Zwinger

After a tour of the church, it’s time to immerse yourself in the history of the region at the Zwinger. Located behind the church, the sprawling complex includes several museum sections. 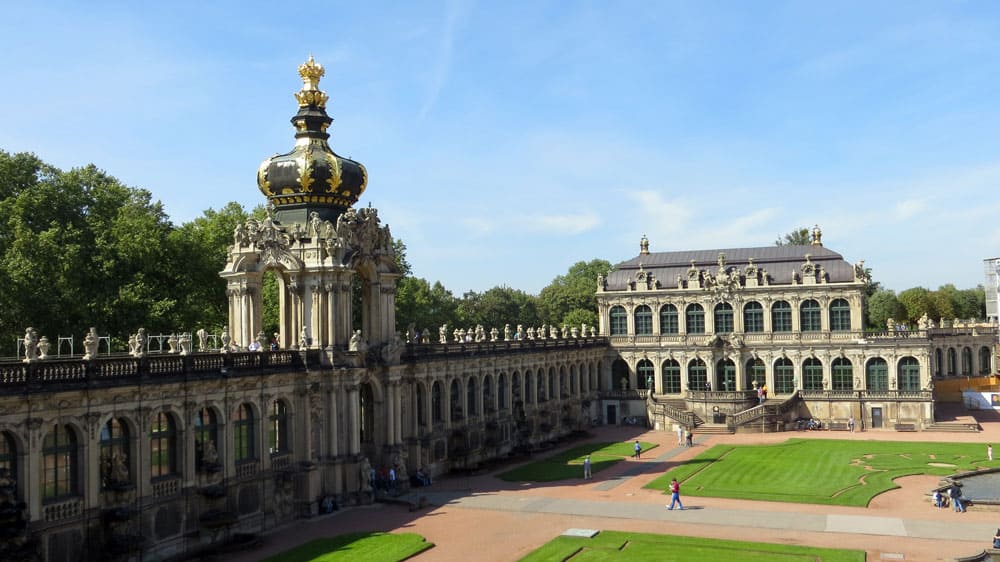 Each section has its own collection of historic treasures but you may only have time to visit one or two areas. If you had more than 24 hours in Dresden, you could spend an entire day exploring the Zwinger and all its buildings.

As you walk to the first museum section, you’ll pass a little café where you can grab a bite and some more coffee. Café Schinkelwache sits halfway between the Zwinger and Dresden Cathedral.

If you want something a little more filling than a pastry, you’ll find about a dozen restaurants, bars, and beer gardens on the block to the left of the Zwinger.

The Zwinger includes three main museums. The first is the most notable, containing works from the most famous painters. The Old Masters Picture Gallery includes over 700 classic paintings. Even if you’re not an art historian, you may recognise a few of the pieces.

The second museum contains the Porcelain Collection as Dresden was once the top porcelain producer in the region. The museum holds close to 20,000 porcelain items from Japan and China along with Meissen porcelain pieces.

PRO TIP: Want to make your visit to the Zwinger extra memorable? Watch the Baroque architecture of Dresden come alive with the sounds of classical music by attending a Gala Concert in the Dresden Zwinger!

After examining the priceless artifacts at the Zwinger, it’s time for shopping on Prager Strasse. A block to the east of the Zwinger, you’ll come across Schloss Strasse. 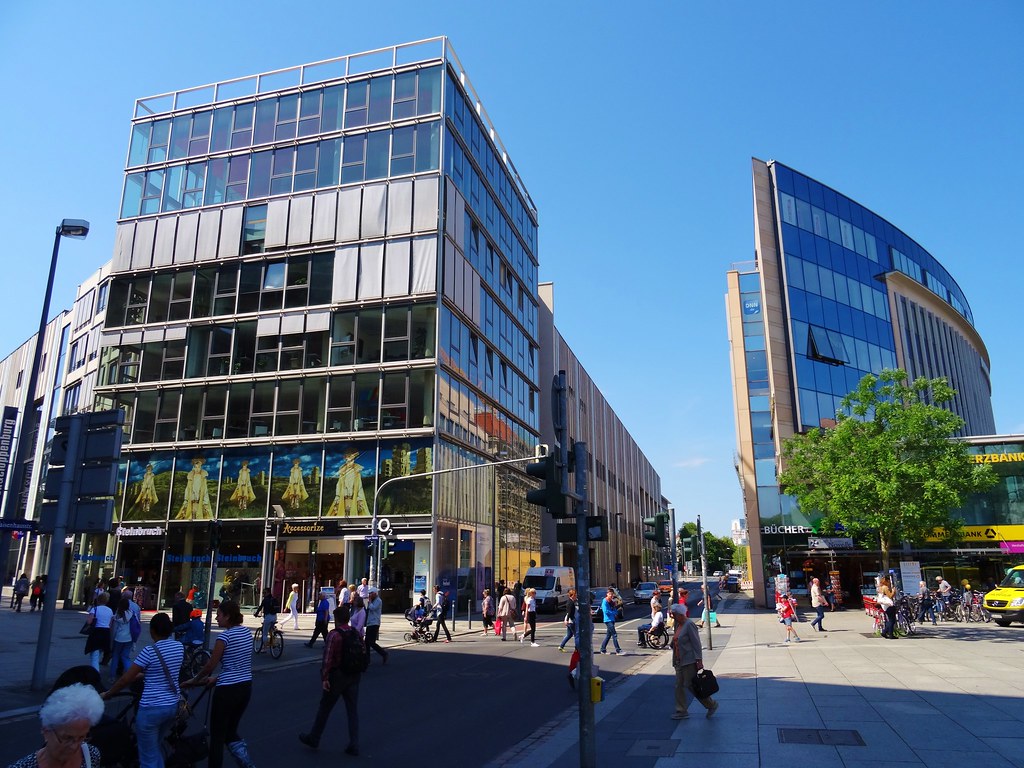 As you walk south on Schloss Strasse, the street becomes Altmarkt and then See Strasse before becoming Prager Strasse on the other side of the Kuelz Ring. This trip should only take 8 to 10 minutes if you don’t stop to stare at the architecture along the way.

Prager Strasse is a pedestrian thoroughfare lined with shops. It’s a high-end shopping street with designer brands and sportswear.

If you want boutique shops, explore some of the nearby alleys. The smaller shops on the side streets survive on the extra foot traffic from Prager Strasse.

You’re also likely to come across street performers, vendors, and other interesting sights along the main street. If you don’t want to shop, take a break on a bench and enjoy the surrounding entertainment.

PRO TIP: Interested in Dresden’s modern culture? Spice up your evening and hop across the Elbe River to join in on a Dresden Neustadt Night Subculture & Pub Tour!

When you tire of shopping, it’s time to get some food and possibly a few drinks. Take Prager Strasse north to Wilsdruffer Strasse to Schweriner Strasse. In less than 20 minutes, you should reach Kraftwerk Mitte.

You’ve now toured some of the most important areas of Dresden in 24 hours. It’s time to unwind and experience the local nightlife.

Kraftwerk Mitte was a fossil-fuelled power plant that operated for 99 years. It shut down in 1994 and was completely converted in 2016. It’s now home to a variety of venues including a dance club and several theatres.

Located in the suburb of Wilsdruffer, the area around Kraftwerk Mitte includes additional pubs, bars, and traditional German beer gardens. You can party until the late hours inside Kraftwerk Mitte or go bar hopping along the side streets.

For those who aren’t into clubbing, skip Kraftwerk Mitte and stick around Prager Strasse. In the evening, a wide variety of upscale restaurants and eateries start opening their doors. If you walk far enough south, you’ll even find a few fast-food chains.

PRO TIP: Interested in Dresden’s culinary & drinking scene? Join in on the popular Taste of Dresden Food Walk! On this 2-hour tour you’ll have an opportunity to taste 6 local food & drink specialities including typical Saxon wine, beer, and desserts like eierschecke (cheese cake).

Where to stay: The best hotels for 24 hours in Dresden

Since the city centre is relatively compact, sorting through the best places to stay in Dresden is hardly as difficult as other bigger German cities like Munich or Berlin. If you’ve only got a quick layover in Dresden, Altstadt is the most logical area to start your accommodations search as its home to many of the city’s top attractions and best hotels. Here are a few top-notch choices…