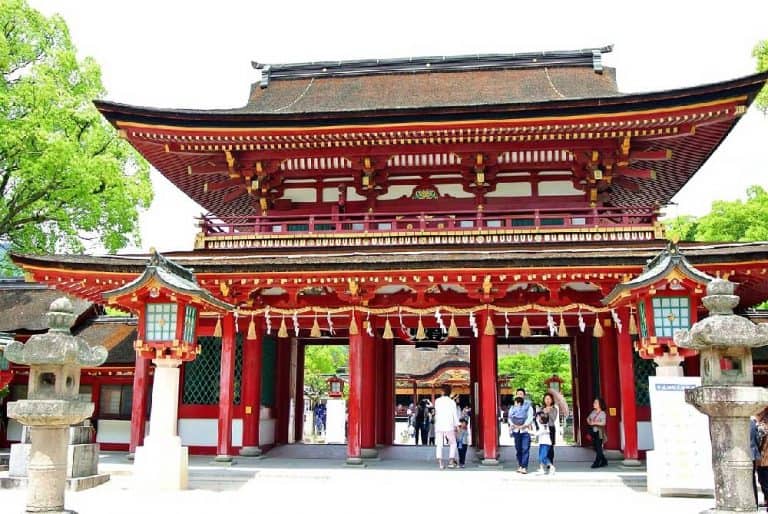 Famous for its sandy beaches, ancient temples, and modern shopping, the bustling harbour city of Fukuoka is the perfect retreat; If you plan to travel to Japan beyond the usual destinations, consider spending at least one day in Fukuoka.

As the eighth most populous city in Japan and the largest on Kyushu Island, Fukuoka has lots to offer. Get your cultural fix at the shrines and temples in the central district or visit the ruins of Fukuoka Castle in Maizuru Park.

The area also offers endless shopping, with a variety of upscale commercial districts and malls, such as Canal City.

Not sure where to go first? Plan your trip with this complete 1-day Fukuoka itinerary…

What to do in Fukuoka in 24 hours: A complete one-day itinerary

You can’t see all of Fukuoka in 24 hours, but you can see a lot. As with most of our one-day city itineraries, this tour of Fukuoka highlights the most significant parts of the city.

You’ll start in the centre, exploring the natural landscapes in the city’s parks and the ruins of Fukuoka Castle. As you travel out of this historic area, you’ll come across culturally important temples and shrines before reaching the commercial districts.

It’s easy to get around on foot. If you don’t spend too much time at each place, you should have no problem seeing most of the city.

PRO TIP: Want to navigate Fukuoka like a pro? Hook yourself up with a Japan Pocket WiFi Rental for your trip! The router rental includes unlimited 4G LTE data and delivery (or airport pick-up) from several locations around the country.

Soak up the morning sun at Ohori and Maizuru Parks

You’ll start the day with time in two of the city’s biggest parks. First, travel to the centre of the city to reach Ohori Park.

Many people also stop to sit on the benches that look out at the pond, but you’ll need to take a walking tour of the park to ensure you have time to hit all the sites you have on your itinerary. 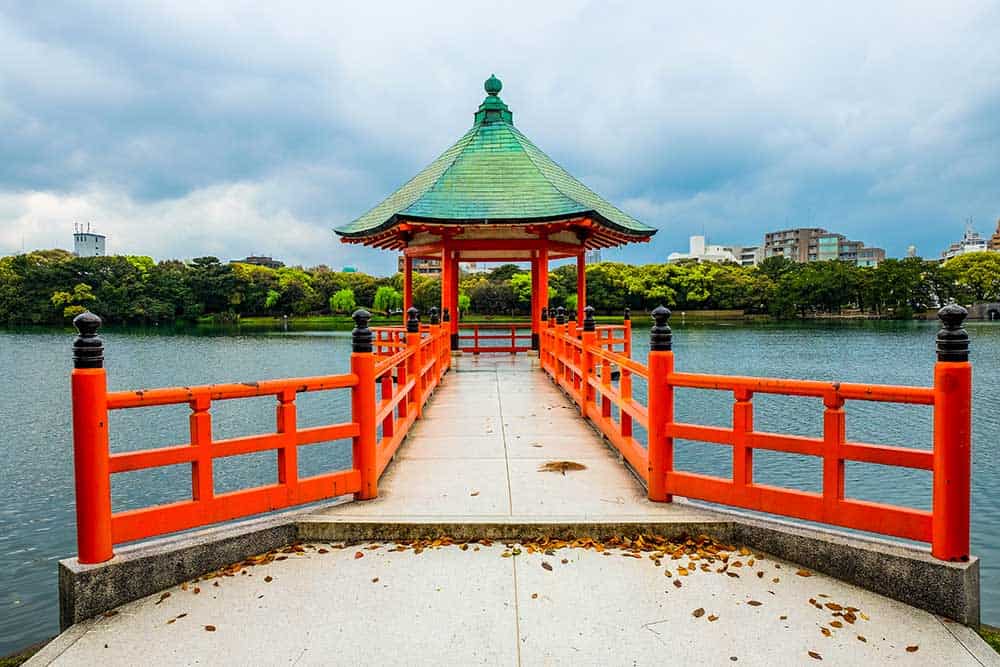 After a short stroll, you’ll reach the neighbouring Maizuru Park containing the remains of Fukuoka Castle. Not much remains of the ruins, except the foundation and some outlying buildings.

The castle was once the largest on the island before getting torn down during the Meiji Restoration.

While there isn’t much of a castle to see, the park is still fun to explore, especially if you’re visiting during cherry blossom season in early April.

Unfortunately, with just 24 hours in Fukuoka, you’ll need to avoid dawdling. Spend some time walking the nature trails and checking out the ruins before heading out of the park.

PRO TIP: Want to easily experience the best of Fukuoka? Get valuable local insights on a Fukuoka Personalized Local Experience! The tour includes several options and will allow you to customize your experience to check out both the city’s highlights and hidden gems that most tourists miss.

When you leave the park, travel northwest toward the sea to reach the tallest structure in the city. This part of the trip is a bit of a stretch, requiring about 30 minutes of walking.

If you’re not up for a long walk, you should have no problem hailing a taxi or reaching the next destination on the bus route. Remember, if you do happen to take a taxi, to not shut the door once you’re seated (the car does that for you!).

Fukuoka Tower is near the sea and one of the most visited attractions in the city. It stands over 230 metres tall and features an observation deck near the top. 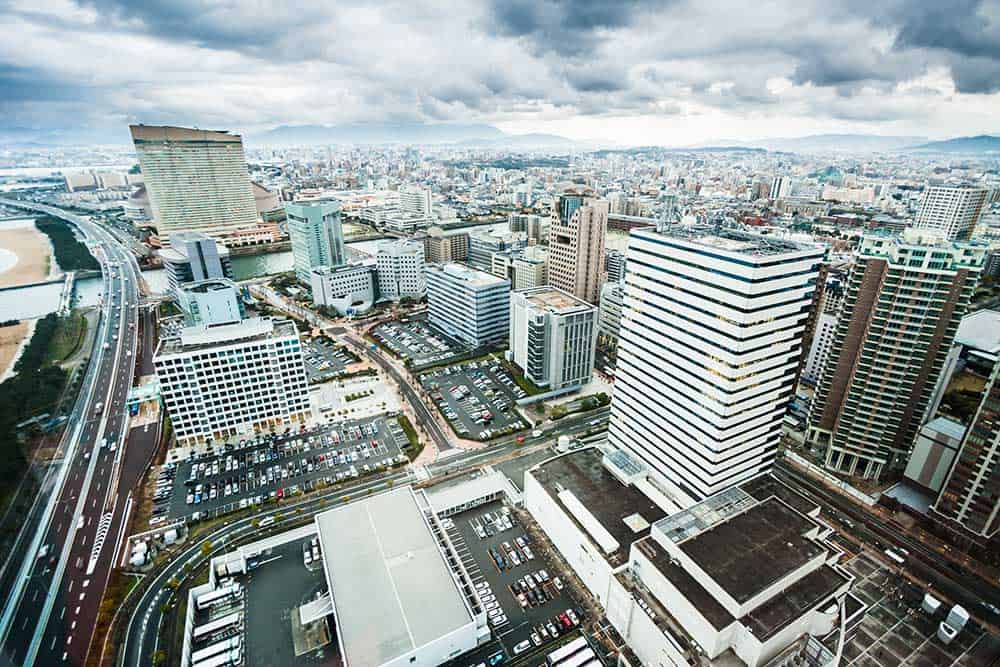 The tower is open to the public for a small fee. After riding the elevator to the top, you get a sweeping view of the city skyline and the sea.

The view is best at sunset or sunrise. At this point, it should be mid-morning and, hopefully, you’ll have clear skies that allow you to take in the surroundings.

The top of the tower also includes a few touristy attractions, including an over-priced restaurant and souvenir photos. You can skip the restaurant as the next destination has a few options to to fill you up at a fraction of the price.

After checking out the skyline from the tower, head back to the ground and walk to Tenjin Central Park. This is another long walk. Luckily, everything else is within a few blocks.

If you don’t feel like buying anything, stroll the area and window shop as you look for a place to grab lunch. Nestled between the department stores and retailers, you’ll find delis, cafes, and restaurants to suit any taste.

While walking the streets of this district, you may overlook one of the largest shopping areas in the city right under your feet. The Tenjin Underground Shopping Center is built under part of this neighbourhood and houses many more shops and restaurants.

If you’re visiting on the weekend, the area is likely to be packed with locals and tourists. Hopefully, you’ll arrive just before noon, avoiding the major influx of shoppers.

PRO TIP: Interested in Fukuoka’s food scene? Explore the city with your tastebuds on a Fukuoka Guided Food Tour! This small-group tour includes a sampling of local snacks including Japanese favourites like sashimi, sushi, mentaiko, and takoyaki.

Start your search for local temples with Tochoji

Any Japan itinerary involving a major city should include at least one stop at a temple. In Fukuoka, Tochoji is a must-see cultural site.

The Buddhist temple is found at the eastern edge of the shopping district. The temple features a large red pagoda that stands out against the surrounding green foliage and the grey city skyline. 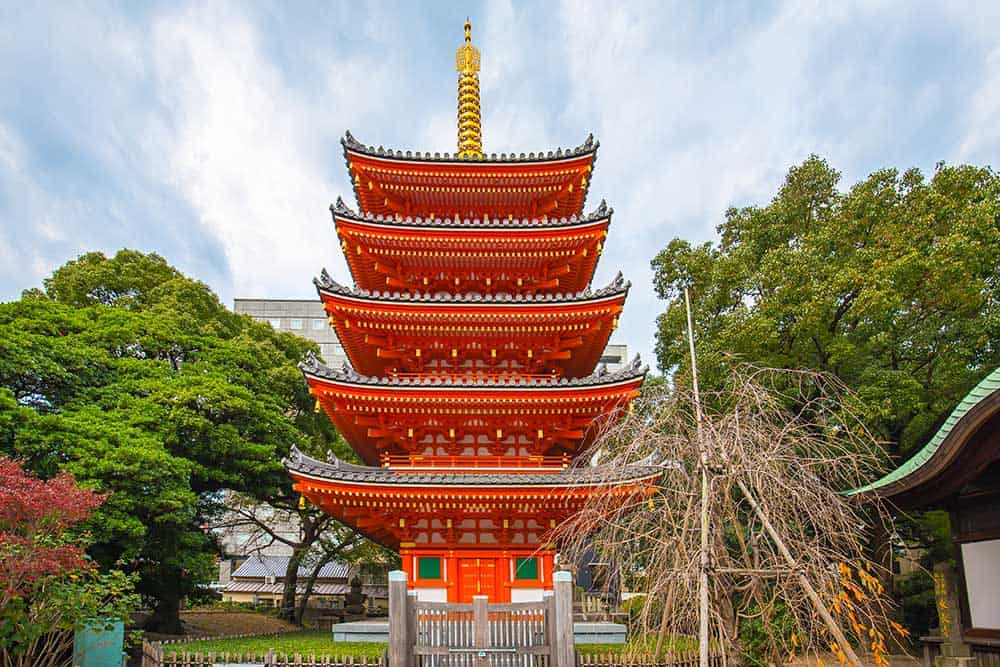 While the outside looks cool, the temple is most famous for what you’ll find inside. The 10-foot tall wooden Buddha statue sits on the second floor of the main hall.

You’re free to explore the interior. Just remember the rule – no photos allowed.

After checking out the interior of the temple, head around back and walk toward the river. This area includes several smaller temples that often get overlooked.

The temples are found throughout the backstreets bordering the river behind the Tochoji temple. Finding the temples gives you a chance to wander around some of the smaller side streets and see more of the inner city.

Continue your cultural tour of Fukuoka at Kushida Shrine

When you’re done searching the backstreets for small temples, travel one block east of Reisen Park to reach Kushida Shrine.

The next cultural destination on this Fukuoka itinerary is an interesting place to explore. Kushida Shrine contains several unusual features, including an assortment of Ishi stones. 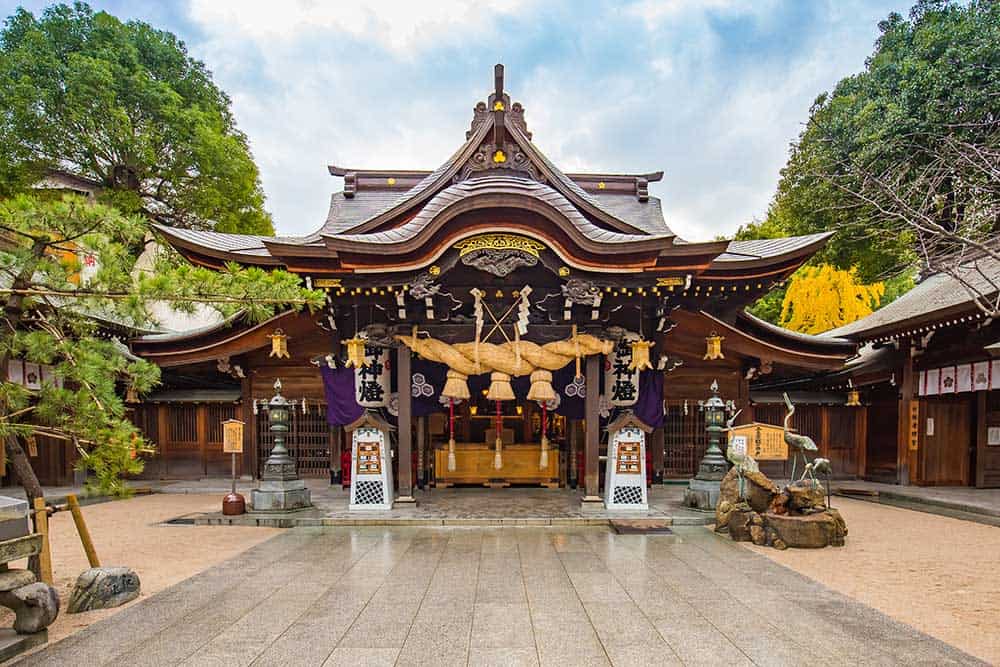 Sumo wrestlers donate the stones and move them around as a show of strength. The grounds include a special trial stone that you can attempt to move to see if you have what it takes to become a sumo wrestler.

The shrine is over 1,000 years old and is beautifully preserved. It acts as the starting point for an annual summer race and hosts several festivals throughout the year.

If you want to learn a little more about the history of the region, you can spend a little money to tour the Hakata Historical Museum inside the shrine.

As with many of the shrines and temples in the city, the grounds include cherry trees. If you’re visiting in April, you may get to see the white and pink blossoms.

PRO TIP: Want to learn more about the temples of Hakata? Book yourself onto the Mysterious Temples of Hakata Walking Tour! Tour highlights include Kushida Shrine, Jotenji, Shofukuji, and Tochoji.

Shop for til you drop at Canal City

When you finish getting your taste of Japanese culture at the various temples, it’s time to satisfy your taste buds and do a bit more shopping in Canal City. You can exit Kushida Shrine to the right and step right into this massive shopping complex.

The sprawling complex includes its own waterways and multiple levels containing all manner of restaurants, cafes, shops, and movie theatres. The mall resembles a small city and has an interesting atmosphere, full of unique shapes, colours, and spiral patterns. 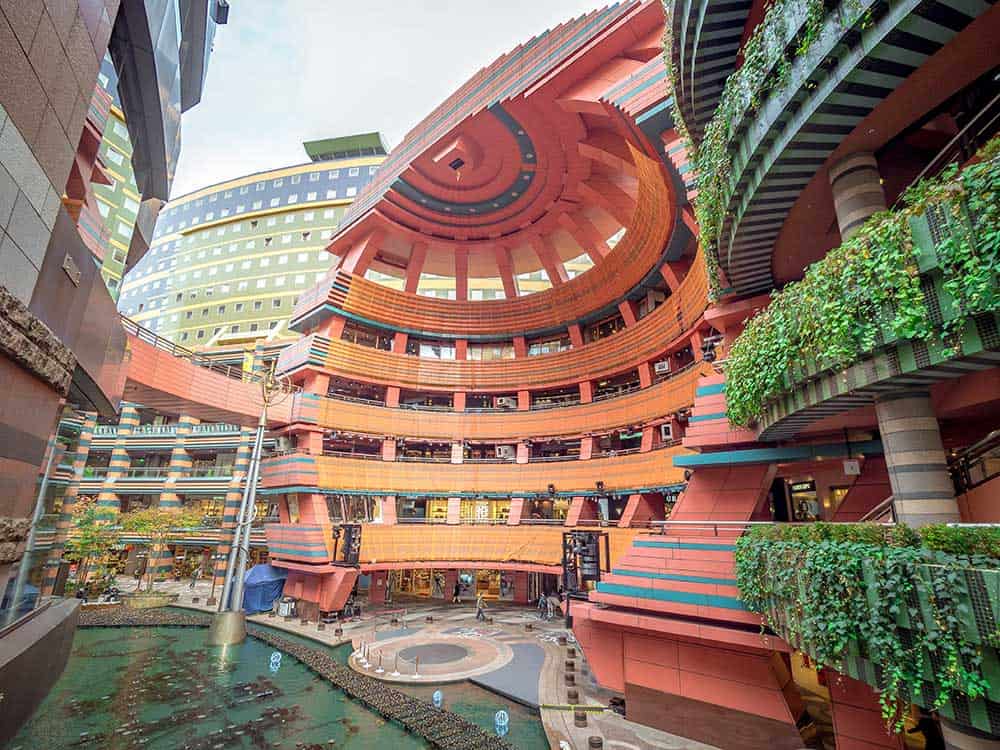 Canal City is the largest private development in the history of the country. The 234,460 square metre facility also includes a narrow pool that runs through the centre, along with various hedge balconies.

If you enjoy ramen, walk to the fifth floor, where you’ll find the Ramen Stadium. It contains eight different ramen shops with dozens of variations of the noodle dish.

You can also catch dazzling water and light displays inside the shopping mall. Every hour, fountains spray water into the air as laser lights dance around to the rhythm of the music playing through loudspeakers.

Experience the local nightlife in Nakasu

You could spend an entire day getting lost in the various stores inside Canal City, but there are still other things to do & see in Fukuoka, including a trip to the nightlife district.

Nakasu is the area where you’ll find rows of bars and clubs overflowing with patrons.

The island includes many footbridges that create a seamless connection with the rest of the city, but still separates it from the surrounding area. It’s lively, bright, and loud. 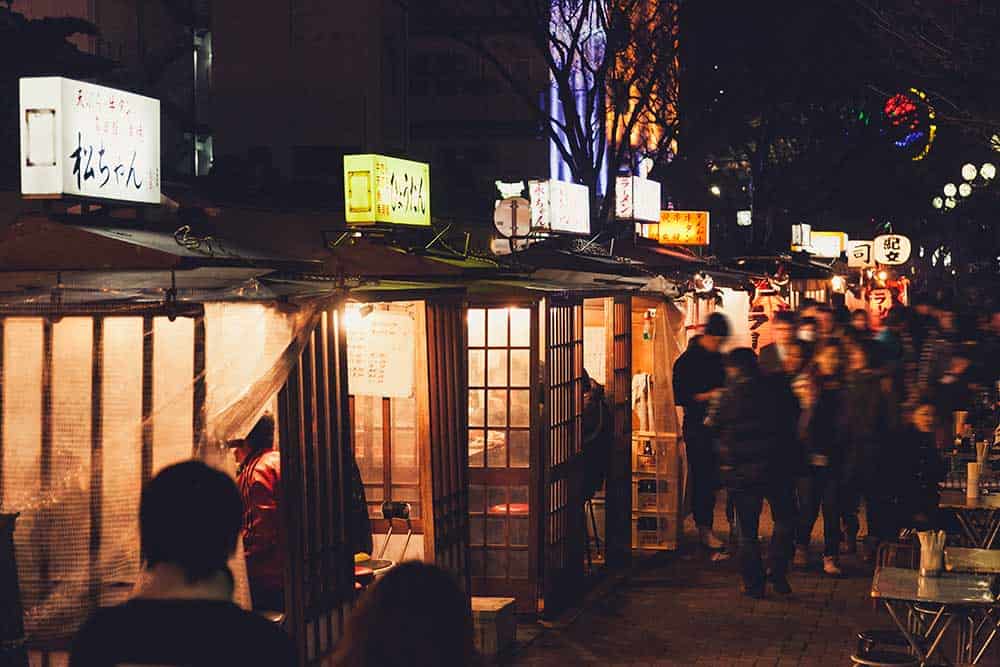 The narrow streets are lined with small establishments. Search the maze of bars for a spot that isn’t too crowded and then grab a drink.

After checking out a few of the bars, you should be ready for dinner and to call it a night. To close out your tour of Fukuoka in one day, grab dinner or a late-night snack at one of the many Yatai food stalls in the area.

The stalls pop up near the bars and clubs, as the vendors know that people need filling food after a few drinks. Enjoy some authentic local street cuisine while soaking up as much of the atmosphere as you can before heading back to your hotel or the station.

Where to stay: The best hotels for 24 hours in Fukuoka

As one of the biggest cities in Japan, sorting through all of the best places to stay in Fukuoka can sometimes seem daunting. When your time is limited, your best bet is to stay in either Chuo Ward or Hakata Ward, which is home to the main train station. Each of these areas will put some of the city’s top attractions at your fingertips. Start your accommodations search with a few of these best hotels in Fukuoka…