Geneva is the jewel of Switzerland, and home to the World Trade Organization, World Health Organization, and the International Committee of the Red Cross. That may make it seem like the capital of the country, but it isn’t. Still, being home to international organizations and world-renowned non-profits – as well as first class jewellers, restauranteurs and chocolatiers makes Geneva a sleek and modern destination.

With one day in Geneva, you’ll get to see some of the top attractions that the city has to offer. Large public squares, national museums, and 19th-century architecture cover most of the landscape but there’s also lots of recent developments to appreciate.

You’ll discover a sophisticated city with unique experiences and five-star hotels. Travellers often consider Geneva one of the best destinations in Switzerland for a luxury vacation. It’s a modern metropolis and home to high-end fashion streets and first-class gastronomical delights.

Don’t know how to start planning? Find inspiration for your trip from this complete 1-day Geneva itinerary.

What to do in Geneva in 24 hours: A complete one-day itinerary

As with most of our one-day city itineraries, this Geneva itinerary tries to give you an overview of the city in just 24 hours.

Geneva is a highly walkable city and it’s easy to get around on foot. You’ll spend most of the day in and around the Old Town area.

If you come back for a longer trip, rent a bike. You can cover more ground and explore some of the outer districts.

For now, you’ll get to tour the historic districts, shop at boutiques, and find out why people flock to this cosmopolitan destination.

Admire the elaborate design of the Brunswick Monument

Depending on how you arrive in Geneva, you’ll likely find yourself at the Cornavin Station or the docks on the western side of the lake. Both options place you near the Brunswick Monument. 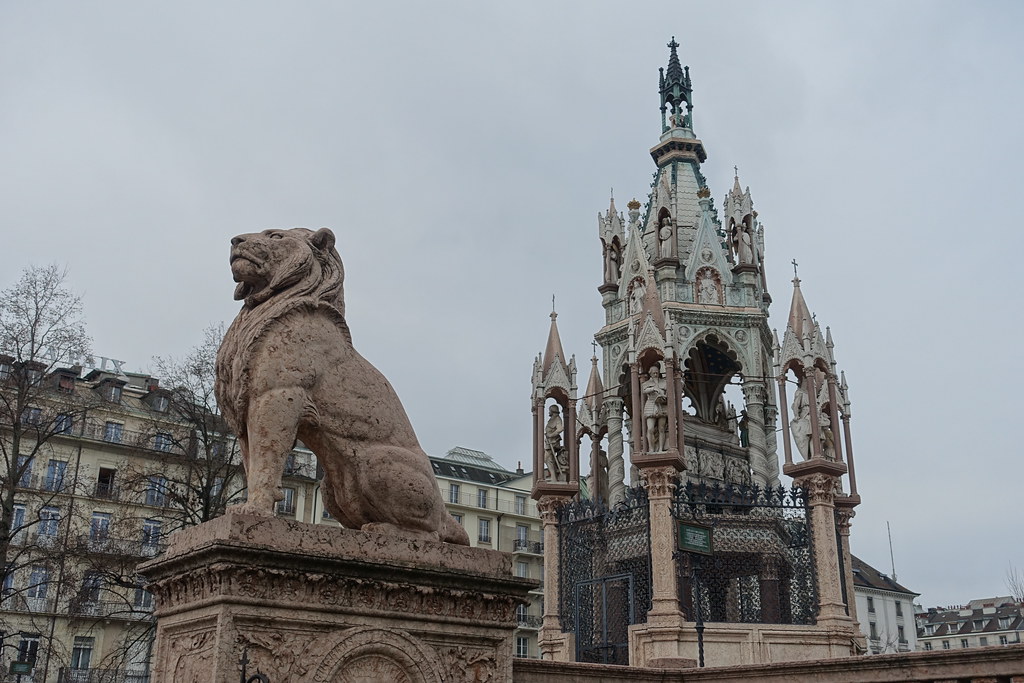 The neo-gothic monument stands near the lakefront in the middle of a public park. The elaborate structure features intricate details and dozens of small spires.

It was built to commemorate Charles II, the Duke of Brunswick. It’s also a mausoleum with a tomb located under the monument. It’s designed as a replica of the five Scaliger Tombs in Italy, closely resembling the tomb of Cansignorio Della Scala built 500 years earlier.

The elegant monument isn’t very big at two or three storeys tall but it’s worth a quick visit. There isn’t much to see or do other than take a few photos and admire the detailed carvings.

If you’re feeling a little hungry, you could also stop at the small café behind the monument. Get a cup of coffee and a light meal before continuing along the waterfront.

Explore the attractions in and around the Lakefront Promenade

After you spend a few minutes walking around the monument, cross Mont Blanc bridge to reach the lakefront promenade.

Located just north of Old Town, the promenade is bordered by the lake and Jardin Anglais (English Garden) park.

You could also check out a few of the attractions in and around the park, starting with the flower clock. Designed in 1955, it’s a large outdoor display of a clock face made from blooms that change throughout the season.

Along with the beautiful flower arrangement, the park has a large fountain, a pavilion, and a monument. The park is always well groomed and full of people. You’ll see locals walking, jogging, and cycling around and tourists stopping at the various attractions.

Take a stroll east through the park and to the next section of the promenade. The green foliage of the park is soon replaced with concrete and buildings. You’ll find numerous shops and restaurants near the waterfront.

If you didn’t grab something at the cafe near the monument, get a bite and walk around or check out the fountain in the lake.

As you walk the lakefront promenade, you may get a view of the Geneva Water Fountain. To get a closer look, walk east on the lakefront road for several minutes. You’ll reach a stone jetty with a paved platform that offers a path out to the fountain. 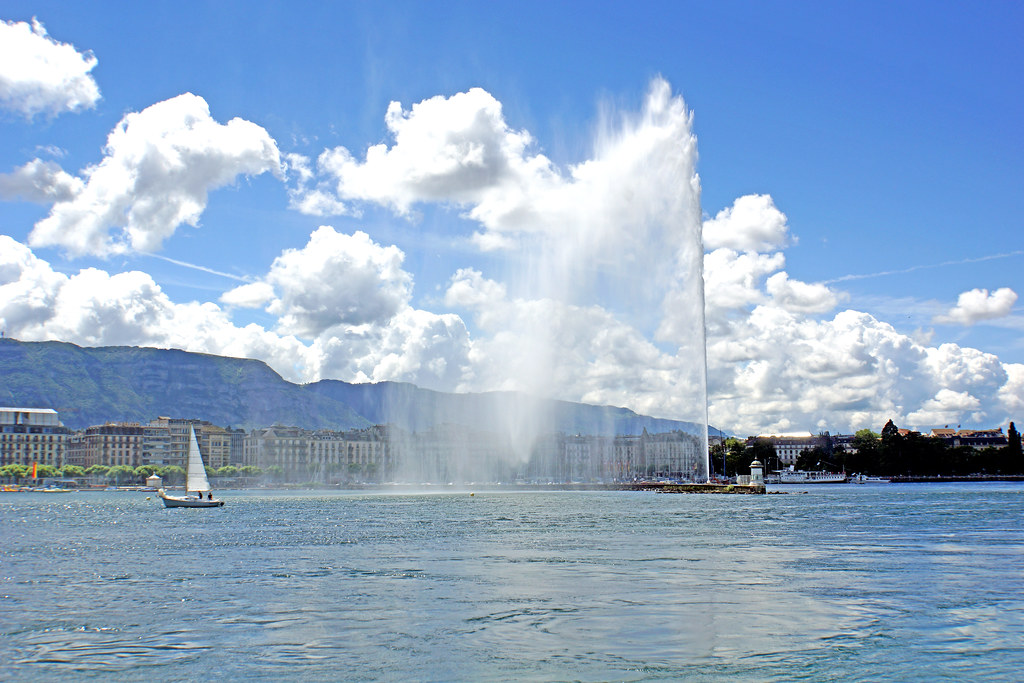 You don’t need to walk all the way to the fountain if you aren’t in the mood to deal with crowds of tourists. The fountain pumps a steady stream of water 140 metres into the sky. It’s just a short distance from the shore, making it hard to miss.

The fountain has become the most iconic landmark in Geneva. Originally installed in 1886, it recently celebrated its 125th anniversary.

The water sprays continuously with thousands of litres in the air at any given time. If you decide to walk on the jetty to the fountain, pay attention to the wind direction. A slight change can send the spray in a different direction, soaking you and anything in your pockets.

You’ll need to work your way back to the shore to reach the next destination. Parc de La Grange is a few blocks east with lakeside views and a large rose garden.

It’s easy to overlook some of the sites further from Old Town when planning a tour of Geneva in 24 hours. Parc de La Grange is worth the trip.

It’s much larger compared to the English Garden from earlier in the itinerary, covering over 200,000 square metres. The area includes tall, old trees that create a dense canopy and shelter from the midday sun.

As you walk around the park, you’ll find a large stage often used for outdoor summer concerts, a couple of theatres, and a playground for children.

After you enter the park, work your way to the northeastern corner. This section of the park contains a sprawling rose garden with a wide variety of rose plants separated by concrete paths and barriers.

You’ll likely pass Villa La Grange as you walk around the park. It’s an active facility often rented out for special occasions. You won’t get to go inside but you can admire the scale of the building as you travel past it on the way the garden.

After a leisurely stroll through the park, walk about 15 minutes to the west until you see the otherwise unremarkable building housing the Natural History Museum of Geneva. 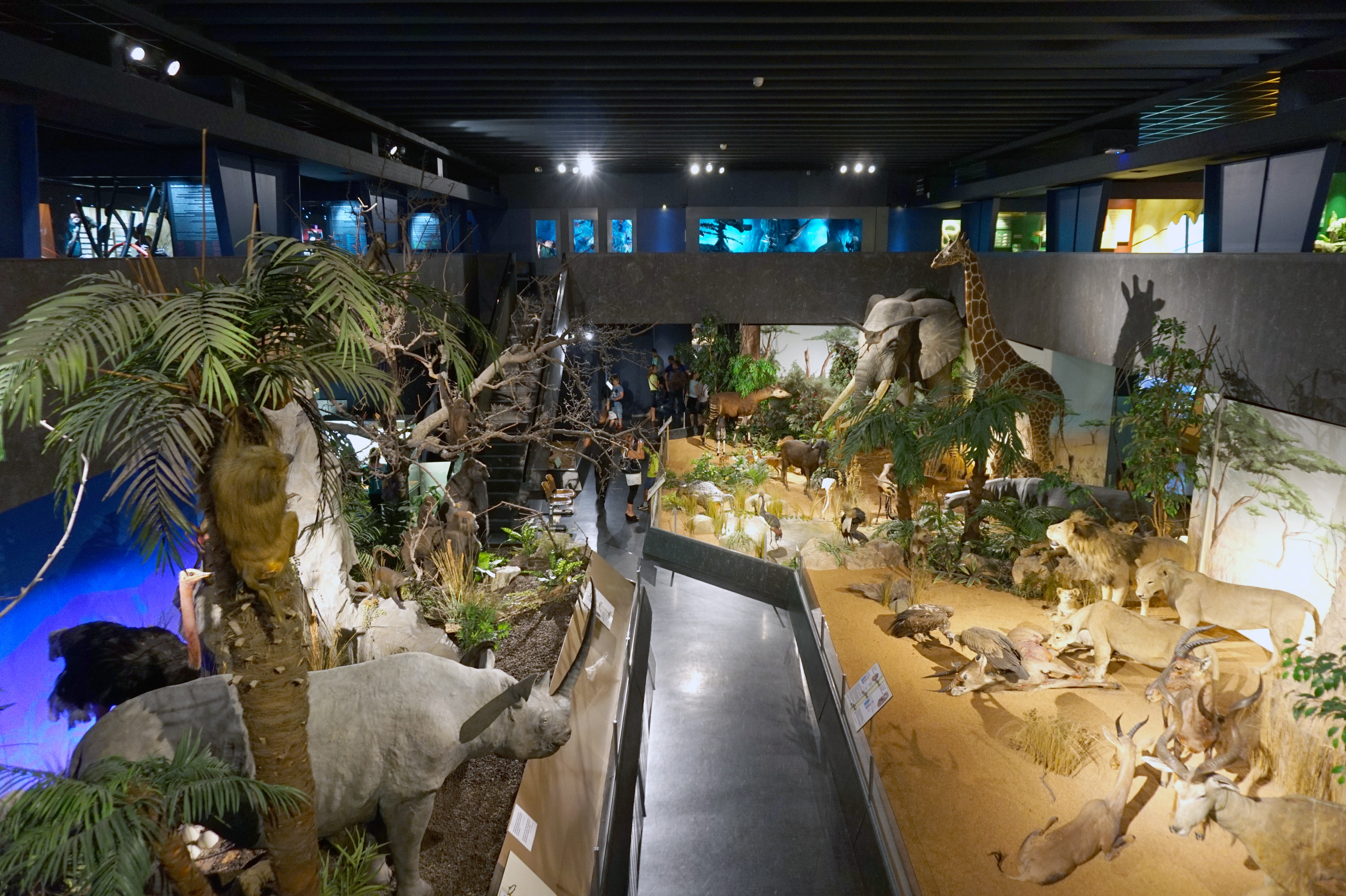 Your Switzerland itinerary should include a stop at one of the museums. The Natural History Museum mostly contains exhibits featuring various animals from around the world. It’s a fun destination for families or solo travellers.

Explore four separate floors of exhibits and taxidermied animals. The only drawback is the lack of English signage.

On the first two floors, you’ll find that most of the displays are only in French or contain very little English. Luckily, the exhibits on the third floor contain full English descriptions.

This is also another spot where you can find food and refreshments. The museum has its own small cafeteria.

The museum is free to enter and open seven days a week. You could easily spend a few hours examining all the exhibits but you can’t stay too long.

Browse the stone streets and quaint shops in Old Town

The museum is mostly just a pit stop on your way to Old Town. When travelling across Geneva in one day, you’ll pass through this area at least once or twice. Most of the top things to do & see in Geneva are in or around Old Town. 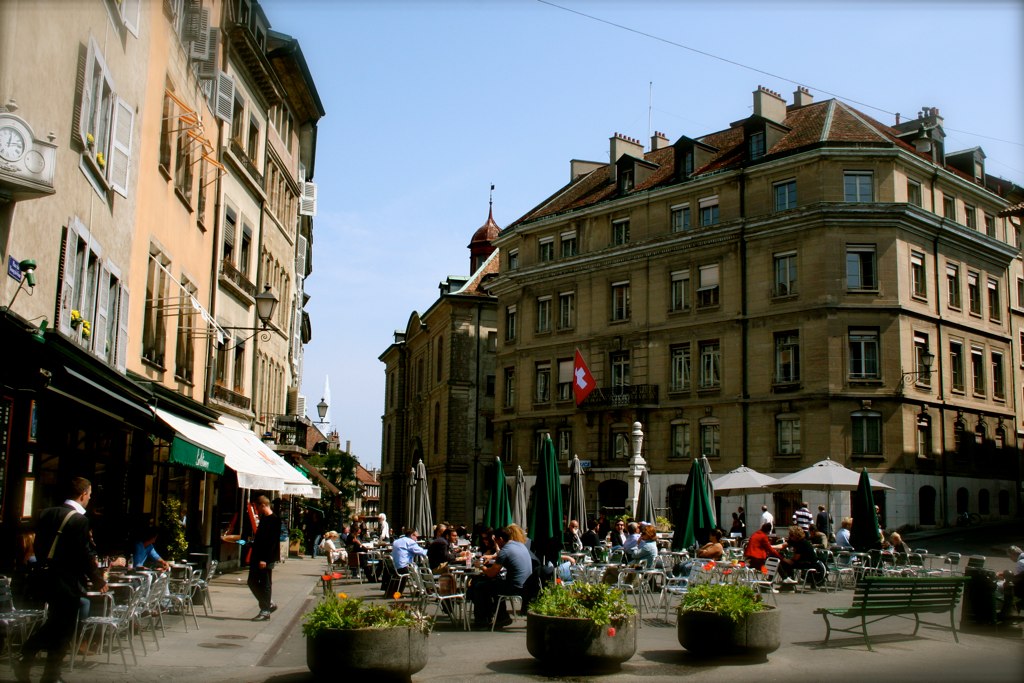 From the museum, Old Town spreads out for several kilometres to your west. This is where you’ll want to spend most of your day so try to make good time when visiting the earlier attractions.

Old Town is a maze of old streets and public squares, attracting throngs of tourists and young locals. You’ll pass endless shops, bars, and cafes but there are also a few historic sites to visit.

Walk to the Place du Bourg-de-Four near the centre of Old Town. It’s the oldest square in the city and surrounded by older buildings. On most days, you’ll find tents covering food stalls and vendors selling various items.

From the square, walk to St. Peter’s Cathedral. You’ll need to ascend a set of 67 stone stairs to reach the passage behind the cathedral. The stairs and passage hide the real scale of the cathedral. After passing through the entrance, you’ll find yourself in a large main hall with vaulted ceilings.

You could spend the rest of the day exploring Old Town or start walking to the water to find a spot for dinner.

Fill up on trendy food and drinks near the riverfront

To finish off your 24 hours in Geneva, walk to the riverfront or lakefront area. You’ll discover a vibrant nightlife scene with numerous bars, clubs, and restaurants that stay open late into the night.

If you’re not into partying, you can simply find a cosy restaurant near the waterfront and enjoy the views as you finish your meal.

For those wanting something familiar, cross the bridge to the other side of the river. The streets just north of the river contain numerous Western fast-food chains and family restaurants serving standard fare.

Whether you stay around Old Town or cross the bridge, make sure that you look toward the fountain. You can see it from most areas near the waterfront. It’s lit up at night, making it even more impressive.

Where to stay: The best hotels for 24 hours in Geneva

Thanks to its compact size, choosing where to stay in Geneva isn’t nearly as complicated as in other top European destinations. For most travellers with a short layover in Geneva, the best areas to stay include Old Town and Les Paquis. Here are a few ideas to start your accommodations search…