No visit to Scotland is complete without spending at least one day in Glasgow. The biggest city and cultural hub of Scotland, while lacking in usual big-name tourist sites, is as fascinating a place as any in Great Britain.

As you roam through its busy streets with 24 hours in Glasgow, you’ll discover a city that’s got a ton of heart & soul roam. Ignore all the trash-talk from other travellers, and soak it all in: I can guarantee you’ll quickly develop a strong kinship with this vastly under-appreciated Scottish city.

Ready to start your Scotland travel plan off with a roar? Get started with this complete 1-day Glasgow itinerary…

What to do in Glasgow in 24 hours: A complete 1-day itinerary

Although the nearby rival of Edinburgh captures most of the attention for urban-loving travellers to Scotland, there are plenty of awesome things to do in Glasgow, many of which you can catch during your first 24 hours in the city. 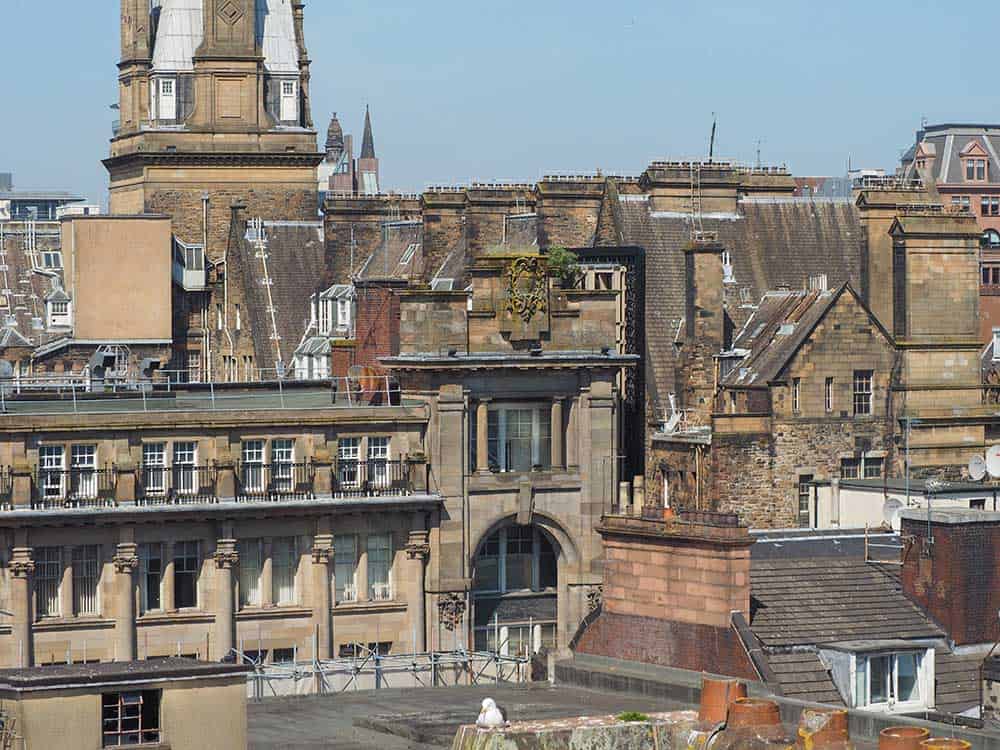 For many travellers, one day here might not be enough. Although Glasgow lacks typical tourist sites, it’s a city that’s often best savoured over a few days to let its sometimes gritty alternative vibe soak in.

Either way, if you enter into your Glasgow itinerary with few expectations you’ll soon discover a city that’s bound to get under skin.

Like most of the city travel itineraries here, I’ve created this one-day Glasgow itinerary with the time-crunched traveller in mind. Within the city centre, you’ll be able to walk between many of stops (which, truthfully, is the best way to see the city).

The metro system is one of the most popular and easiest ways for getting around Glasgow. You can get an all-day ticket (£4.10 for adults, £2.00 for children) at any subway station. Otherwise, taxis are a good alternative to walking and a little quicker than using public transportation.

Without further ado, let’s take a look at how to plan a trip to in Glasgow in 24 hours…

Preparing for your Glasgow itinerary? Don’t forget to protect yourself with travel insurance!

Strolling through the Glasgow Green 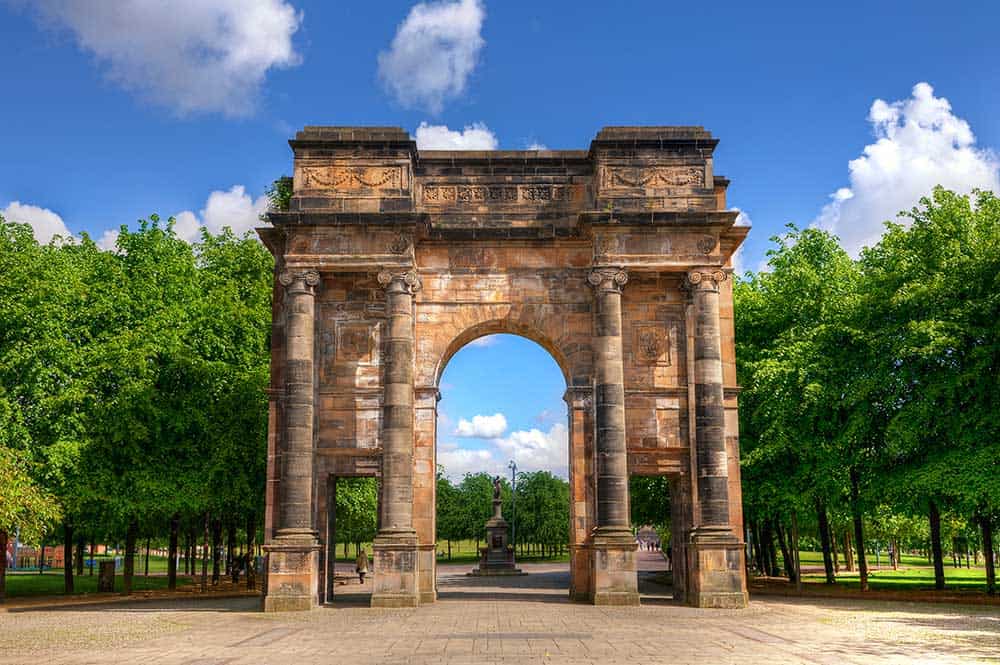 Until the 19th century, the whole of Glasgow Green was used as a grazing area for sheep and cows. Don’t worry: You won’t be bumping into either animal there these days. (Though a run-in with a bonafide Scottish sheep might make for interesting story, no?)

Wandering around Glasgow Green is a fantastic way to start off your day with a little relaxation. The entire park stretches from the districts of Bridgeton and Carlton over to the Saltmarket located at the High Court.

You can easily spend an hour or two here, but with only one day in Glasgow, you’ll want to charge up your batteries relatively quickly to get set to take on the rest of the city.

Want to make the most out of your day in Glasgow? Grab a ticket for the City Sightseeing Glasgow Hop-On Hop-Off Bus Tour where you’ll be able to explore the city at your own pace! Tour includes audio with commentary in 8 different languages.

Discover Glasgow Cathedral and the Necropolis

From Glasgow Green, it only takes around 20 minutes to walk to the Glasgow Cathedral and Necropolis, two of the most interesting sites in the city.

The show-stopping Glasgow Cathedral was consecrated in 1197 by David I. It’s the only church in all of Scotland to survive the Scottish Reformation without much damage to its structure. 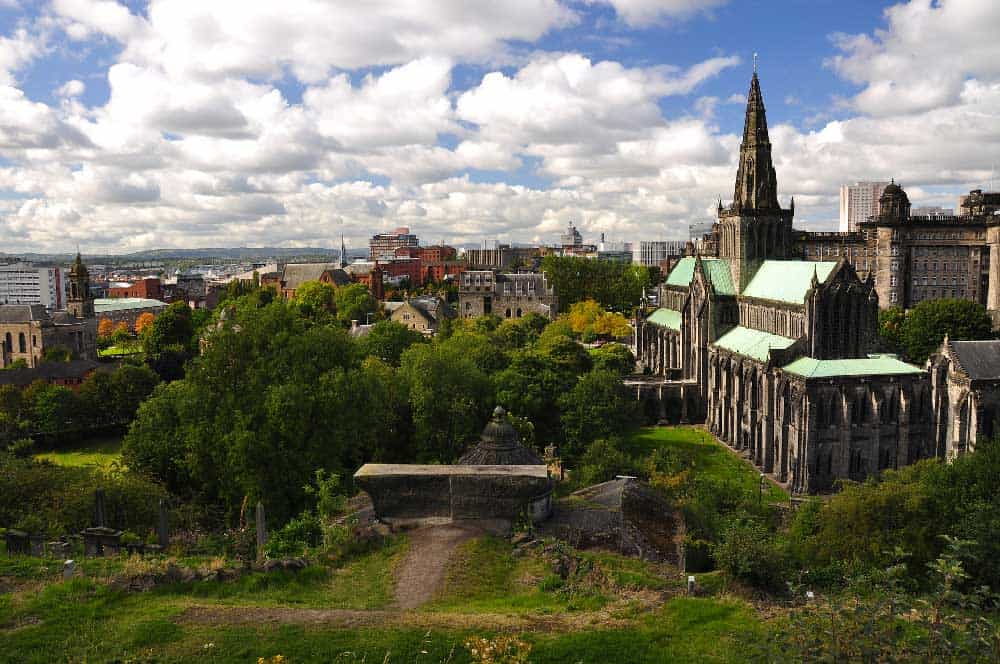 The inside you’ll be dazzled by the cathedral’s high Gothic arches and stained glass windows. The cathedral also houses a crypt where patron saint of Glasgow, St. Mungo, lies.

After checking out the inside, head directly behind cathedral towards the Necropolis. I know visiting a graveyard on vacation isn’t usually the dream, but this one is truly something to behold.

The Necropolis has approximately 3,500 monuments and more than 50,000 grave sites, including John Knox, the leader of the Scottish Reformation. The views onto the city from here are simply spectacular!

Want the lowdown on Glasgow’s most important historical sites? Join a professional tour guide on the Half-Day Private Glasgow Must-Sees Tour including stops at Glasgow Cathedral and the Necropolis!

Visiting two monuments in one at George Square

Scotland is full of monuments and Glasgow’s no exception. From the cathedral, stroll about 20 minutes via High Street and George Street to reach George Square, the unofficial heart of central Glasgow.

Located at George Square’s south end, you’ll see an impressive statue/monument of Robert Burns. In case you didn’t know, Robert Burns was an incredible Scottish poet born in 1795. His most famous work, Auld Lang Syne, is one of the most well-known traditional songs in the world. (Especially when the ball drops on New Year’s Eve!) 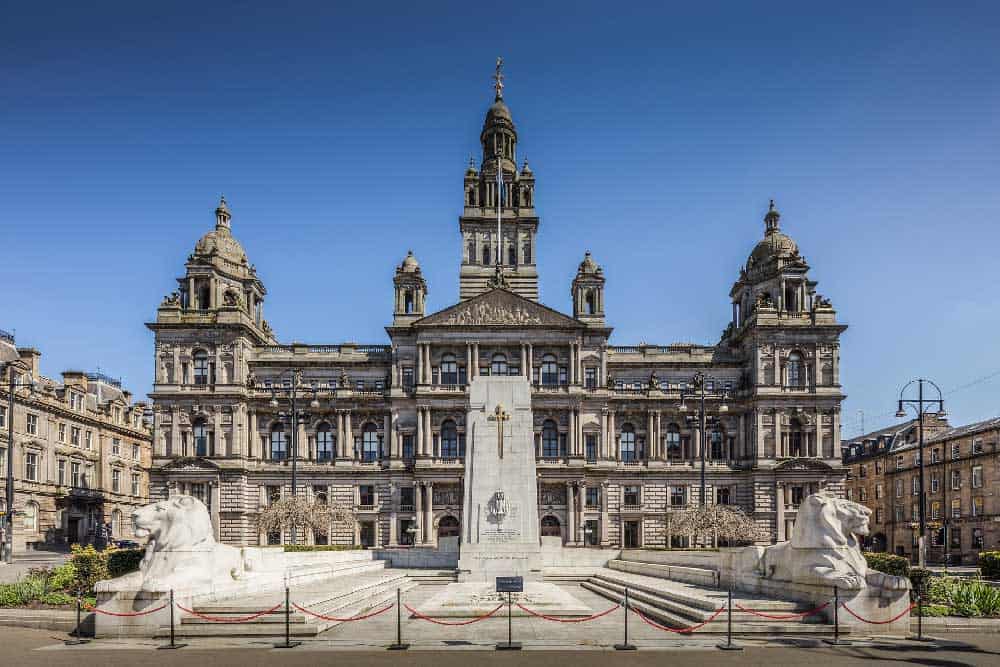 Once you’ve got an eyeful, elsewhere in the square you’ll see a monument of Sir Walter Scott. Born in 1771, Sir Walter Scott was the first Baronet FRSE, a historical novelist, historian, playwright, and even a poet.

Dazzle at the square’s other monuments and architecture before embarking further on your Glasgow itinerary.

Need a little more insight into the history of Glasgow? Walk through the city centre, catching Glasgow’s top attractions, alongside a professional guide on the Half-Day Private Glasgow Must-Sees Tour or, if you’re tight on time, the shorter 3-Hour Private Glasgow Essentials Tour! Both of these private tours include hotel pick-up/drop-off within Glasgow City Centre.

Grab a bite at The Restaurant Bar and Grill

By now your stomach is probably screaming for food: Why not stop at The Restaurant Bar and Grill? It’s located just minutes away from George Square. 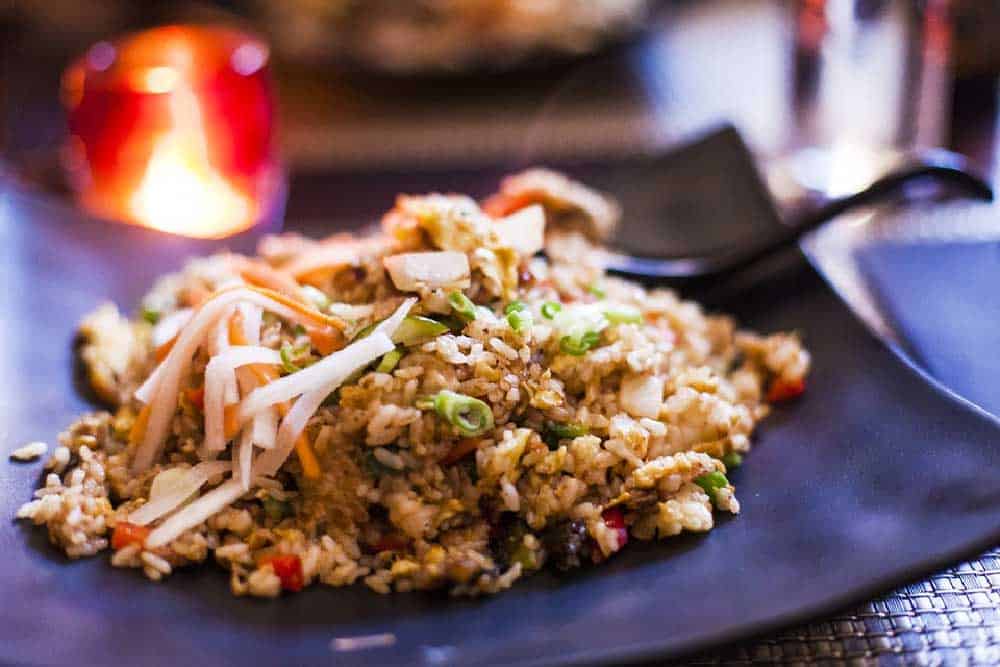 The Restaurant Bar and Grill has plenty of Scottish, vegan, and vegetarian options. There’s something for everyone here, so get comfortable & grab some food before heading back out. (Perhaps some crispy duck with a wine pairing?)

From George Square, it’s a quick walk to Buchanan Street, home to some of the best shops & boutiques in Glasgow. Even if you don’t want to spend your precious time browsing through stores, Buchanan Street is one of the best places to put your finger on the pulse of Glasgow. 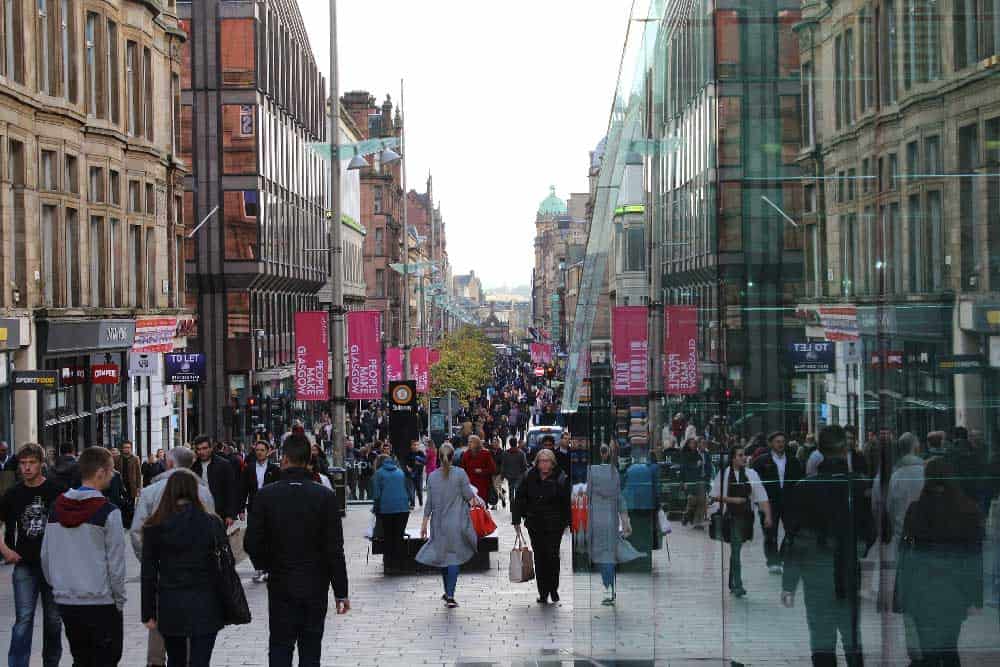 Some of the shops you’ll find along Buchanan Street include Apple, Nike & The North Face as well more Scottish brands like the Isle of Skye Candle Company, Tartan Plus, and The Whisky Shop. 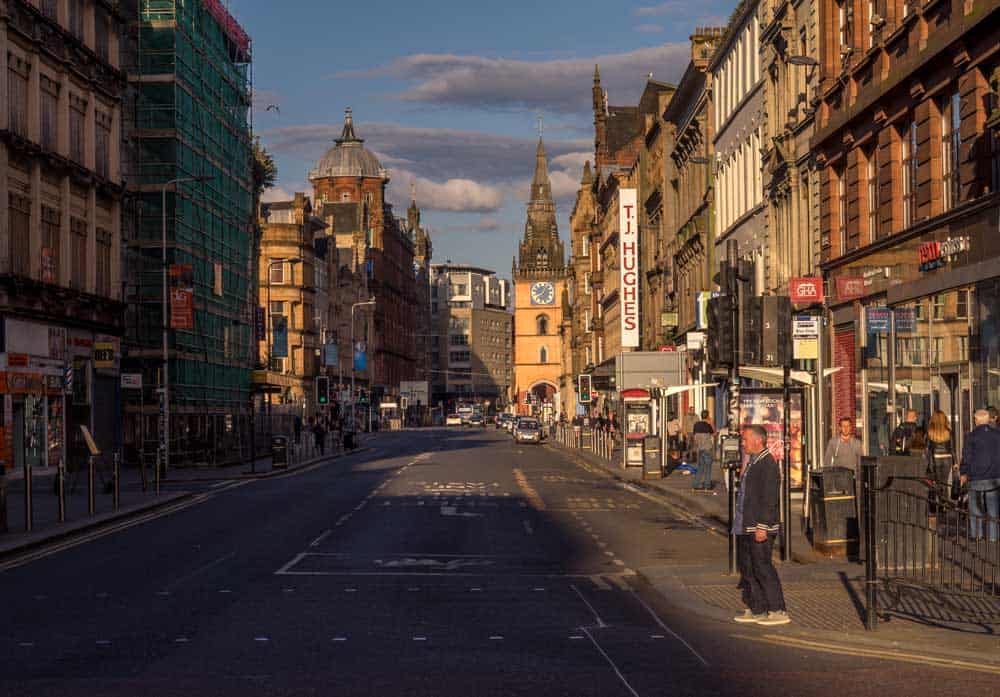 Besides being a fantastic neighbourhood to exercise your camera’s shutter, Merchant City has, in recent years, become, along with Finnieston in the West End, one of the hippest districts in Glasgow. These days, Merchant City is bursting with restaurants, bars, markets & art galleries.

Spend some time wandering around here; there’s no end to what you might find!

Interested in the cultural history of Merchant City? Hop onto the Merchant City Past and Present Music Tour to learn about some of the neighbourhood’s legendary music venues where some of Glasgow’s biggest names like Billy Connelly, Franz Ferdinand, and Simple Minds got their starts.

To round out your appreciation of Glasgow, venture off from the city centre to the West End. This leafy district, centred by the University of Glasgow, is just over 20 minutes by transit, 10 minutes by car or 45 minutes by foot from Merchant City.

A great first stop here is the iconic Mackintosh House, once the home of turn-of-the-century Scottish artist and architect, Charles Rennie Mackintosh, who was responsible for bringing international fame to the art & architecture of Glasgow.

The signage for Mackintosh House can be a little confusing. To be sure you’re in the right place, stand in front of the Hunterian Art Gallery (pictured above), turn around, and you’re there!

Both the history and beauty of the Mackintosh House make this building worthy of a spot among your first 24 hours in Glasgow. The house itself is quite small and a self-guided tour should take no longer than 45 minutes or so.

Once you’ve checked out Mackintosh House, be sure to take a look around the nearby University of Glasgow. It’s only about 5 minutes away by foot and features some eye-catching buildings that’ll be perfect for your Instagram feed. 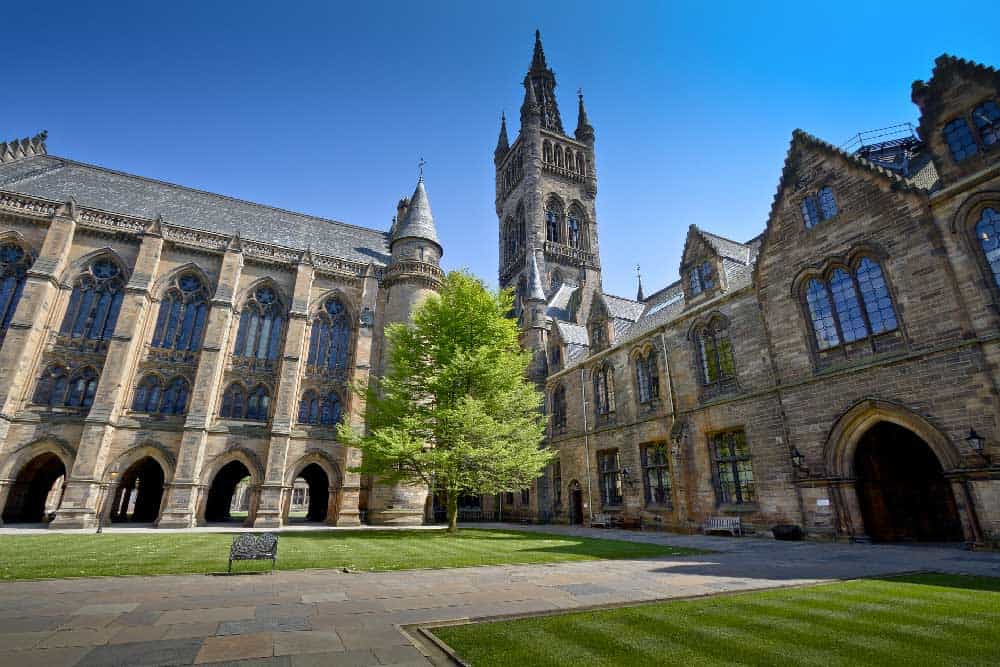 If you get a little thirsty on your journey through the West End, pop into one of the restaurants or pubs along Ashton Lane near Hillhead Station. This atmospheric laneway is a favourite for local students and one of the most popular streets for food & drinks in city.

Want to dig deeper into the West End? Check out the Glasgow West End Whisky Tasting & Walking Tour where you’ll get to experience one of the city’s coolest areas while appreciating some of its finest single-malt whiskies.

From the West End, it’s about 30 minutes by foot (or less than 15 minutes by taxi) to the Glasgow Science Centre on the River Clyde. 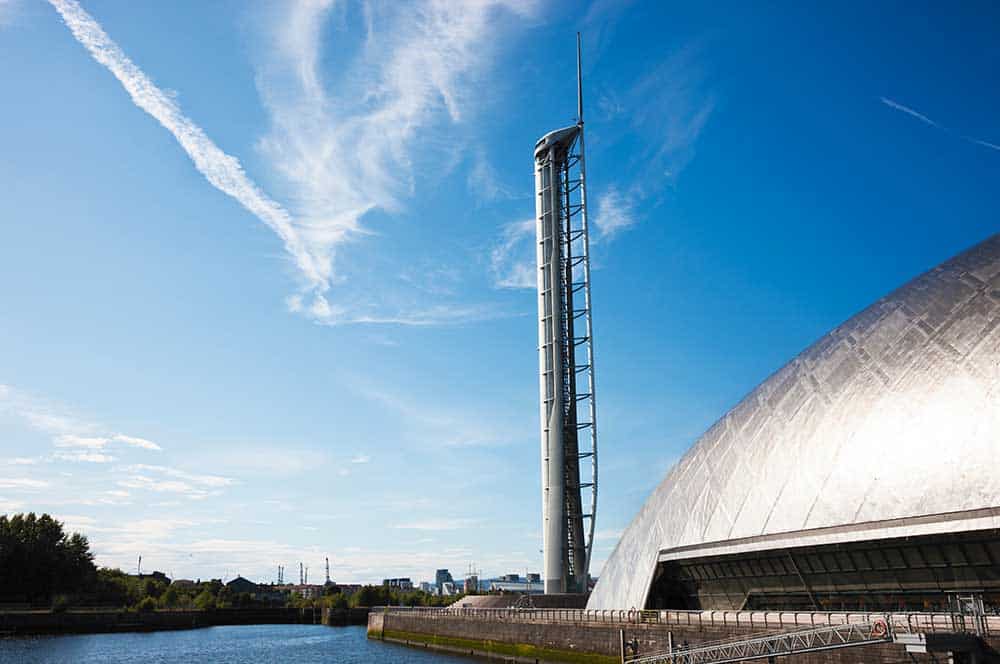 If you’re travelling with your kids, the Glasgow Science Centre is a must-see. The centre features a wide variety of exhibits, shows & workshops that the whole family will love. (Even if you’re a solo traveller with a slight interest in science, you might get a kick out of this place!)

From the Glasgow Science Centre, backtrack a little through the neighbourhood of Finnieston (voted one of the hippest places to live in Britain) for a dinner at the Crabshakk on Argyle Street.

The Crabshakk is famous in the area for its selection of seafood, pasta, steak, vegetarian dishes, and a lot of lovely desserts. If you’re at a loss for what to get, you won’t regret gobbling down the popular Crabshakk Fish Club Sandwich.

End of the day drinks at The Bon Accord

Walk off your Crabshakk dinner on a pleasant 15-minute stroll towards The Bon Accord on North Street, regarded one of the best pubs in all of Glasgow. In a city that’s quite serious about their drinking establishments, this is a tall claim indeed. But once you visit for yourself, you’ll see that, perhaps, it’s not so far-fetched!

If you’re an ale lover, you’re going to have the absolute time of your life at The Bon Accord. The pub features approximately 800 different brands. Whisky lovers will also relish in a chance to choose from more than 350 bottles of whisky including some of Scotland’s most cherished single malts.

Where to stay: The best hotels for 24 hours in Glasgow

With only one day in the city, your choice for where to stay in Glasgow will narrow down considerably. On a time-crunch, I’d recommend sticking in the city centre. There’s a wide range of accommodation here, and you’ll have plenty of opportunities to explore everything on this itinerary in close range.

Here are a few excellent options to start your search: