With its centuries-old buildings, houses, and streets, Granada is undoubtedly one of the best vacation destinations in Spain for urban travel bufs. There’s plenty to explore this city, but with just one day in Granada, it can be a major challenge to fit it all in.

Besides the typical historic sightseeing, Granada provides plenty of opportunities for shopping and indulging in the region’s best foods & drinks. Local artisans here offer a wide variety of delicately crafted goods. You can also spend the afternoon drinking local wine and sampling mouth-watering tapas in any of the old-time taverns lining the historic centre’s cobblestone streets.

What to do in Granada in 24 hours: A complete one-day itinerary

Granada is a city full of historic chapels, churches, and monasteries. It’s also got a lot of modern shops, restaurants, and bars. If you want to really dig into the culture of Granada in just one day, there are quite a few different sites to explore.

You’ll start in one of the largest public squares before heading to the most famous site in the city. From there, you’ll walk a big circle around the city while checking out the top attractions.

With just 24 hours in Granada (and as we’d suggest for most of our one-day city itineraries) you’ll need to start at the crack of dawn if you want to check out everything. Remember to set an alarm and then hit the streets bright and early to begin this complete one-day itinerary.

Preparing for your Granada itinerary? Don’t forget to protect yourself with travel insurance!

Due to the lovely view, this area becomes packed with tourists by midday. Luckily, you’re starting early. 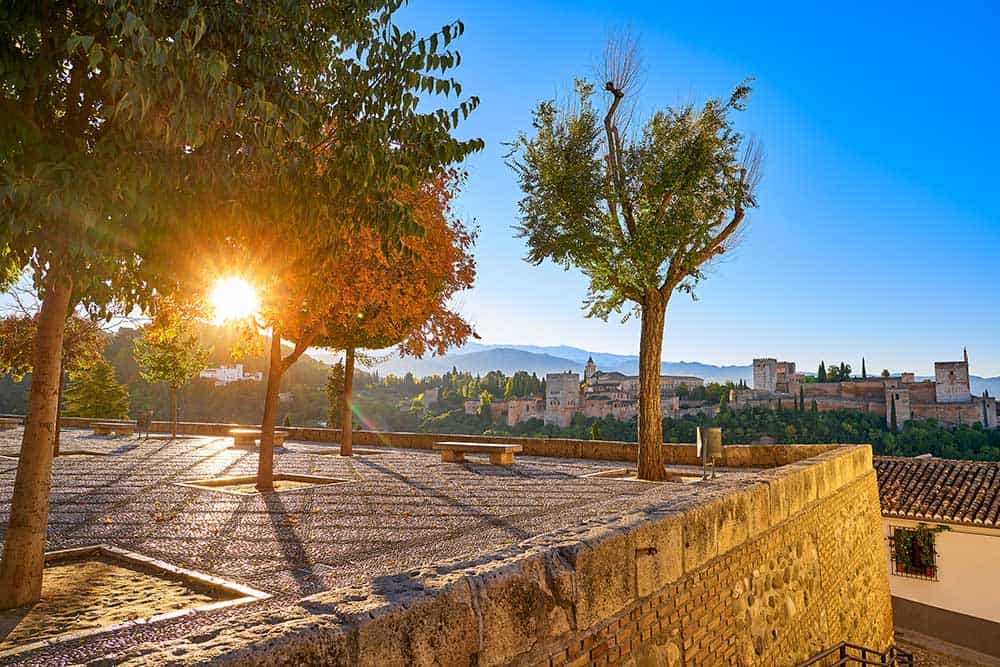 Take in the view and then grab a bite. There are several restaurants in the immediate area selling everything from pastries to omelets.

To the south is the Alhambra and to the east is Albaicin, which is one of the older districts in the city. It’s also home to the large gypsy community that set up camp hundreds of years ago and continues to contribute to the colourful local culture to this day.

If you come back when you’ve got more time, you could spend a whole day in Albaicin shopping at the markets and viewing the unique gypsy homes.

Your next destination is southeast of the square. It’s a 23-minute walk that will take you through some old neighbourhoods and past historic buildings.

PRO TIP: Want to experience Granada’s coolest historical quarter to its fullest? Hop on the two-hour Albayzin & Sacromonte Historical Walking Tour where you’ll walk the cobbled streets of two of Granada’s most interesting neighbourhoods alongside a professional tour guide!

Walk through ancient courtyards at the Alhambra

As you walk southeast, you’ll start to see the top of the Alhambra in the distance. This incredible palace is a must-see destination for any first-time Spain itinerary. (It’s the second-most visited attraction in Europe!) 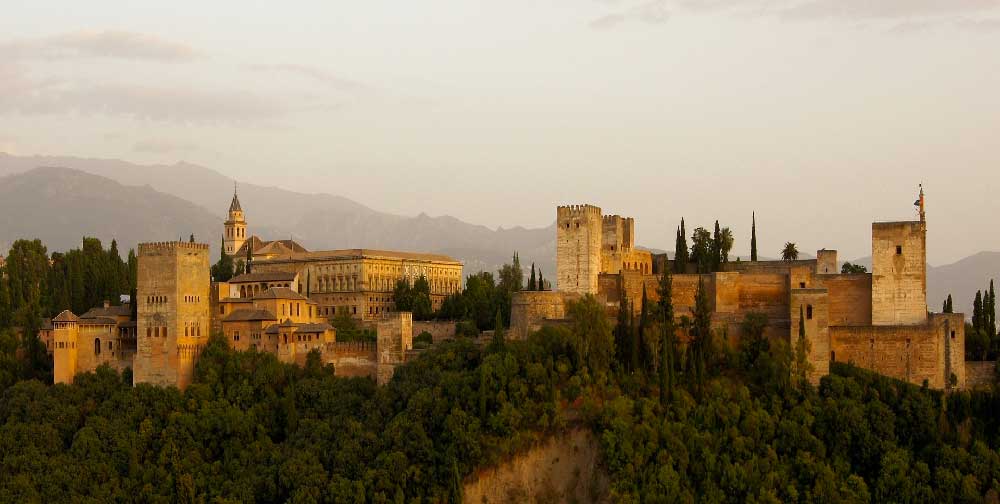 The Alhambra was built as a hilltop fortress and eventually became a royal palace. It’s an interesting site as it offers a mixture of architectural features. There are elements of Moorish influence along with the late Gothic style.

The lines to enter the Alhambra are long, especially if you arrive later in the day. As it’s your first stop after grabbing breakfast, you should beat most of the crowd. You need to purchase your tickets in advance.

Once inside the palace, take your time. The Alhambra has a museum, lots of ancient architecture, massive courtyards, and beautiful gardens.

PRO TIP: Avoid the crowds and all the hassles by booking an Alhambra & Generalife Skip-the-Line & Guided Tour! If you’re on time-crunch, this is an absolute must as you don’t want waste any precious time in unruly line-ups.

Test the local cuisine in the crowded Plaza Nueva

Depending on how long you waited in line to enter the Alhambra, your stomach may be rumbling by this time. Luckily, food is just a short walk away.

Start heading west on Cuesta de Gomerez after exiting the south end of the Alhambra. In about ten minutes, you’ll reach Plaza Nueva.

Plaza Nueva is another of the many public squares found throughout the city. It’s in the centre of the city and is one of the most visited spots along with the adjacent Plaza de Santa Ana. It should be close to lunchtime and the crowds will start gathering. 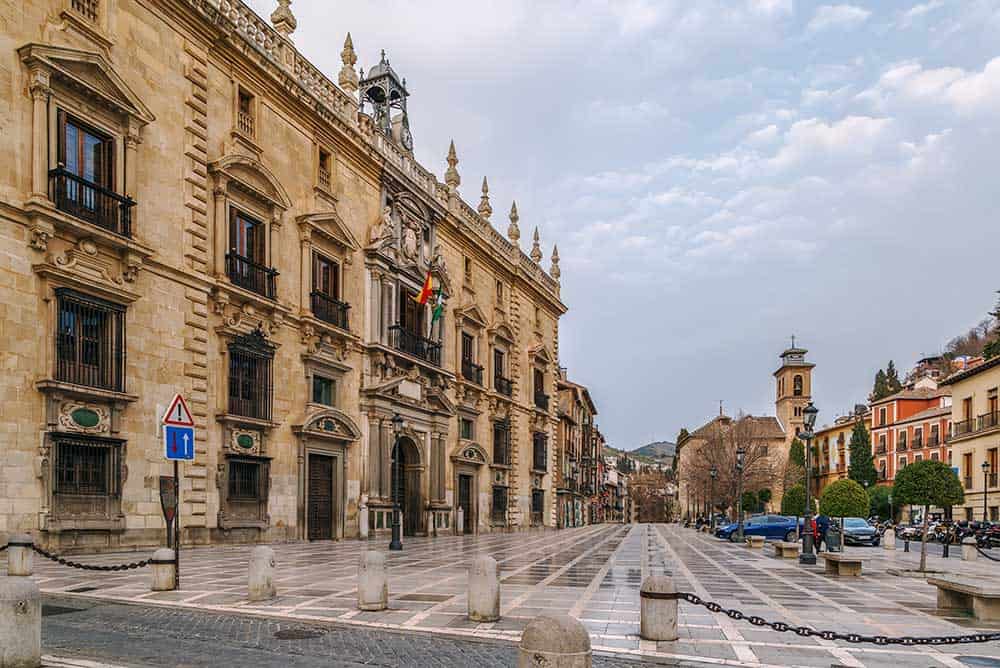 If there are lots of tourists, you should also have lots of entertainment. Street performers and musicians often arrive to keep people entertained and earn tips.

Get some food from any of the restaurants or cafes in the square and enjoy live entertainment as you eat.

You should also take a moment to appreciate the views around you. The square is surrounded by historic buildings, large fountains, and various sculptures.

See royal treasures and jewels at the Cathedral of Granada

When your food settles, you can start walking to the next spot. Catedral de Granada (Cathedral of Granada) is another of the top attractions in Granada. It’s just a few blocks southwest from the public square.

The cathedral is an ornate building that includes gothic architecture with influences from the early Spanish Renaissance style. The large courtyard in front of the building provides a great view of the postcard-worthy façade.

Once you get inside, you can spend money on the self-guided audio tour or simply walk around. Some people find the audio guide to be a little confusing so it may be better to explore the cathedral on your own.

The cathedral houses a treasure trove of rare artifacts from the Spanish nobles. You can view the royal jewels and artwork that are put on display and imagine how extravagant the royal family must have been.

The neighbouring Royal Chapel holds the tombs of King Ferdinand and Queen Isabella but it requires a separate ticket. If you want to see the tombs, go for it. Just keep in mind that you may need to wait through another long line.

PRO TIP: Skip the line to save time and get the low-down on the full story of the city’s most famous religious building on the 1-hour Granada Cathedral Tour!

Find sanctuary in the Botanical Gardens

After the grandeur of the cathedral, it’s time to enjoy the smell of fresh flowers. Walk northwest past Plaza de la Trinidad to get to the Botanical Garden of the University of Granada.

The botanical gardens and university are not a major attraction or a common destination on the typical Granada itinerary. However, they are worth a visit.

When you visit the garden, you’ll notice that it’s not the best-maintained garden or even all that attractive.

Why should visit a nearly abandoned botanical garden? It gives you a break from the crowds and gives you a chance to relax.

There are also several cafes and restaurants surrounding the university that houses the botanical gardens, giving you another chance to grab a bite or a coffee.

About five minutes north of the botanical gardens is the famous Basilica of San Juan de Dios. The inside of this basilica is covered in extravagant baroque design.

The gold-covered walls shine and glimmer, creating an ethereal atmosphere. When you get closer to the ornate décor, it starts to lose some of its appeal. It’s a bit similar to a painting in that way. 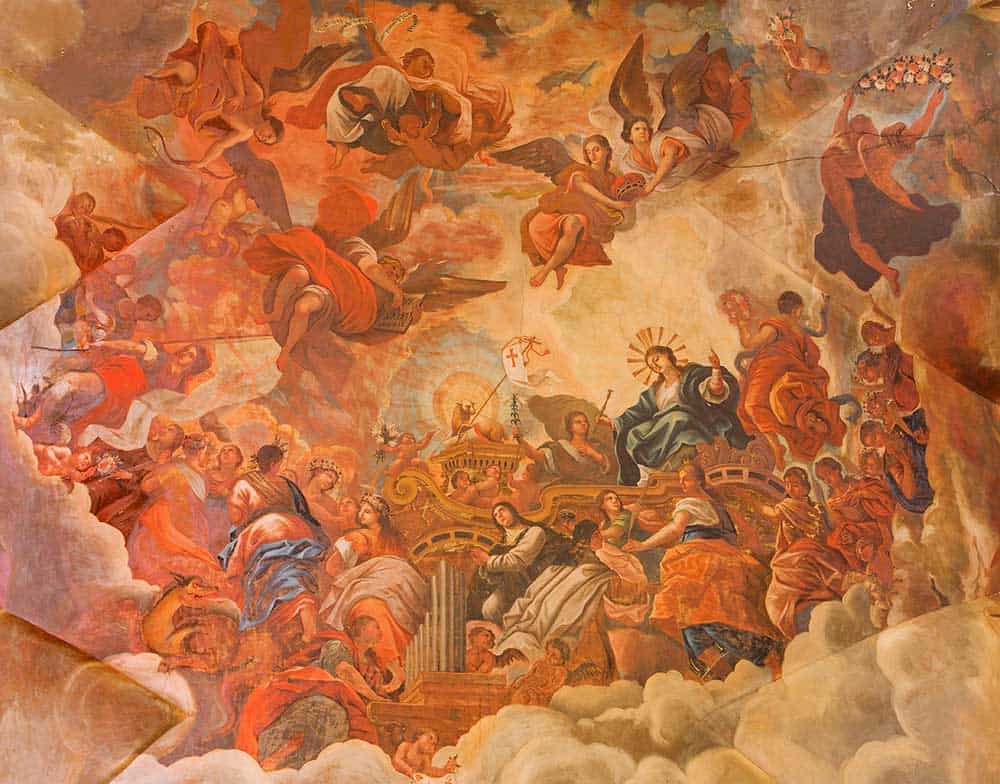 If you walk to the back of the church and take everything in, the detailed gold decorations and carvings are truly a spectacle that you’ll never forget.

While you may not fit a lot of different sites into your 1-day Granada itinerary, this basilica makes up for the lack of variety. It’s easy to spend several hours looking at all the opulent gold artwork.

If it’s not too late in the day, consider taking the audio tour. Unlike the Cathedral of Granada, this audio tour is clear, easy to follow, and informational.

When you finish touring the basilica, it’s time to work your way back toward where you began. A short six-minute walk will take you to the Gate of Elvira (Puerta de Elvira).

The gate is one of the last remaining structures from the Moorish occupation. It was originally the gate to the city and is now in the centre of modern Granada. 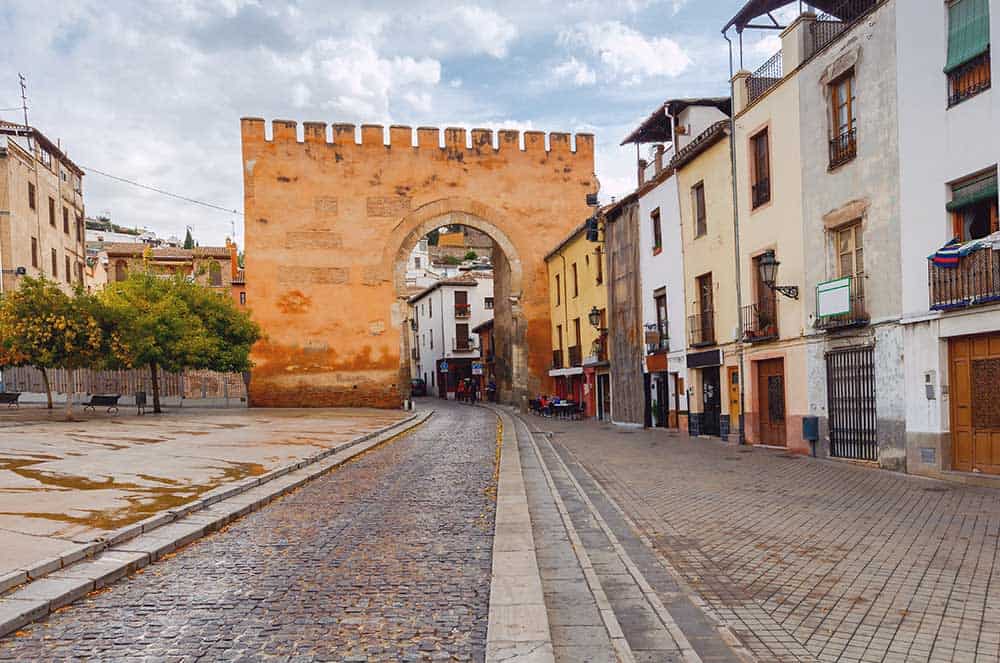 Hopefully, you’ll reach the gate just about sunset, which is the perfect way to finish touring Granada in 24 hours. You can see most of the city from this popular vantage point and try to pick out the different places that you’ve visited throughout the day.

You can’t get to the top of the gate but you can get a view of the city from the surrounding streets. The gate is on the outskirts of Albaicin, near where you started your journey. This is where the hills start to rise, giving you a chance to look out on the rest of the city.

PRO TIP: Didn’t get enough of the Albaicin in the morning? Explore more during the evening hours on the 2.5-hour Albaicin Tapas and Drinks Walking Tour including wine & tapas tastings!

After taking in a view of the city from the Gate of Elvira, close out your trip of Granada in one day with food and drinks in the neighbouring plazas. There are a couple of different choices. To your north is Plaza del Triunfo while Plaza de Santillana is to your south. 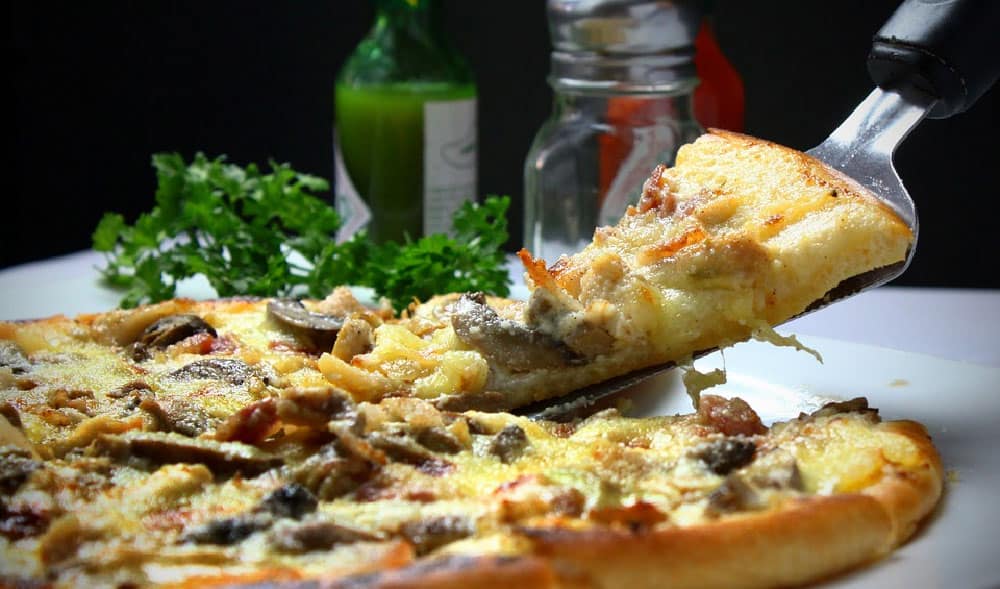 Both options provide plenty of choices. You can grab Italian pizza, try Pakistani pizza, or simply fill up on tapas and wash your appetizers down with cold beer or wine.

Toward the south end of the plaza, you’ll find Pata Palo. The popular cocktail bar often has live music and quickly fills up with the younger crowd. It opens about 10 PM, which is about when this area starts to come to life.

If you don’t like noisy crowds, this is the time to call an end to your trip. Otherwise, take a tour of the cocktail bars and try various tapas.

Where to stay: The best hotels for 24 hours in Granada

With the city’s relatively compact size, choosing among the best places to stay in Granada isn’t so difficult—especially when you’ve only got a quick layover in Granada. To get the most out of this itinerary, stick to the areas around the Centro and the Albayzin. Here are a few hotels to start your search…