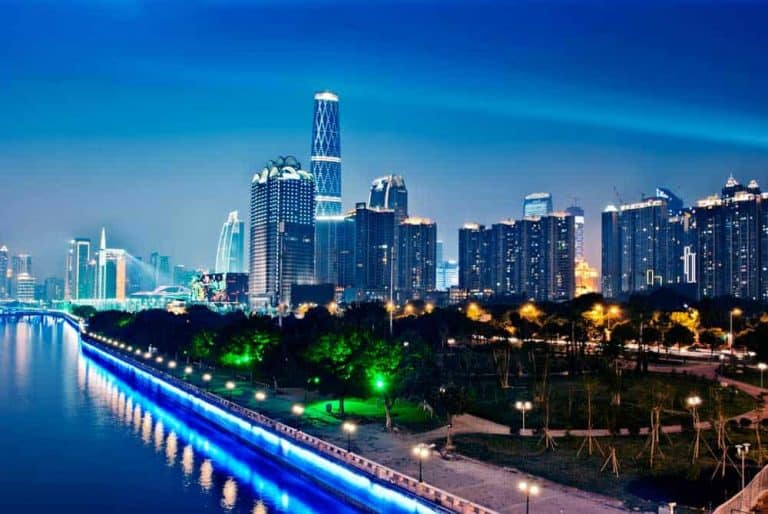 If you’ve only got one day in Guangzhou, covering every inch of this sprawling city is almost impossible.

It’s the heart of the Pearl River and centre of trade in the region. During and after the 2010 Asian Games, the city saw a boom of new development, but it still maintains a laidback city vibe. Despite the bustling activity along the river, Guangzhou still manages to retain a more laid back atmosphere compared to other Chinese metropolises.

Behind every towering skyscraper, you’ll come across a temple, historic site, or local eatery. Narrow, leafy streets reflect the general calm of the city. The hidden gems you’ll find along your travels make Guangzhou one of the top destinations in China, but you’ll need several days to see it all.

Don’t know where to start? Plan your route with this complete 1-day Guangzhou itinerary…

What to do in Guangzhou in 24 hours: A complete one-day itinerary

Thanks to the new 144-hour visa-free policies for Guangzhou, it’s never been easier to tack on a quick layover in this fascinating Chinese metropolis to your Asian travel itinerary.

The downtown area of Guangzhou covers several square kilometres of dense urban development. Just to the north of the skyscrapers and crowded streets, you’ll get to enjoy fresh air from the scenic overlook on the top of Baiyun Mountain.

You’ll then work your way through the main districts. This Guangzhou itinerary takes you through the centre of the city, as with most of our one-day city itineraries. As you cut across the city streets, you can get your culture fix at various temples and museums.

To round out the trip, you’ll explore some of the shopping centres before reaching the areas best known for their entertainment and nightlife.

Preparing for your Guangzhou itinerary? Don’t forget to protect yourself with travel insurance!

Breath in the fresh air from the top of Baiyun Mountain

Guangzhou is a busy city with millions of people and tens of thousands of tourists. Before you spend an entire day walking shoulder-to-shoulder with everyone, stretch your legs on a walk to the lookout points on Baiyun Mountain. 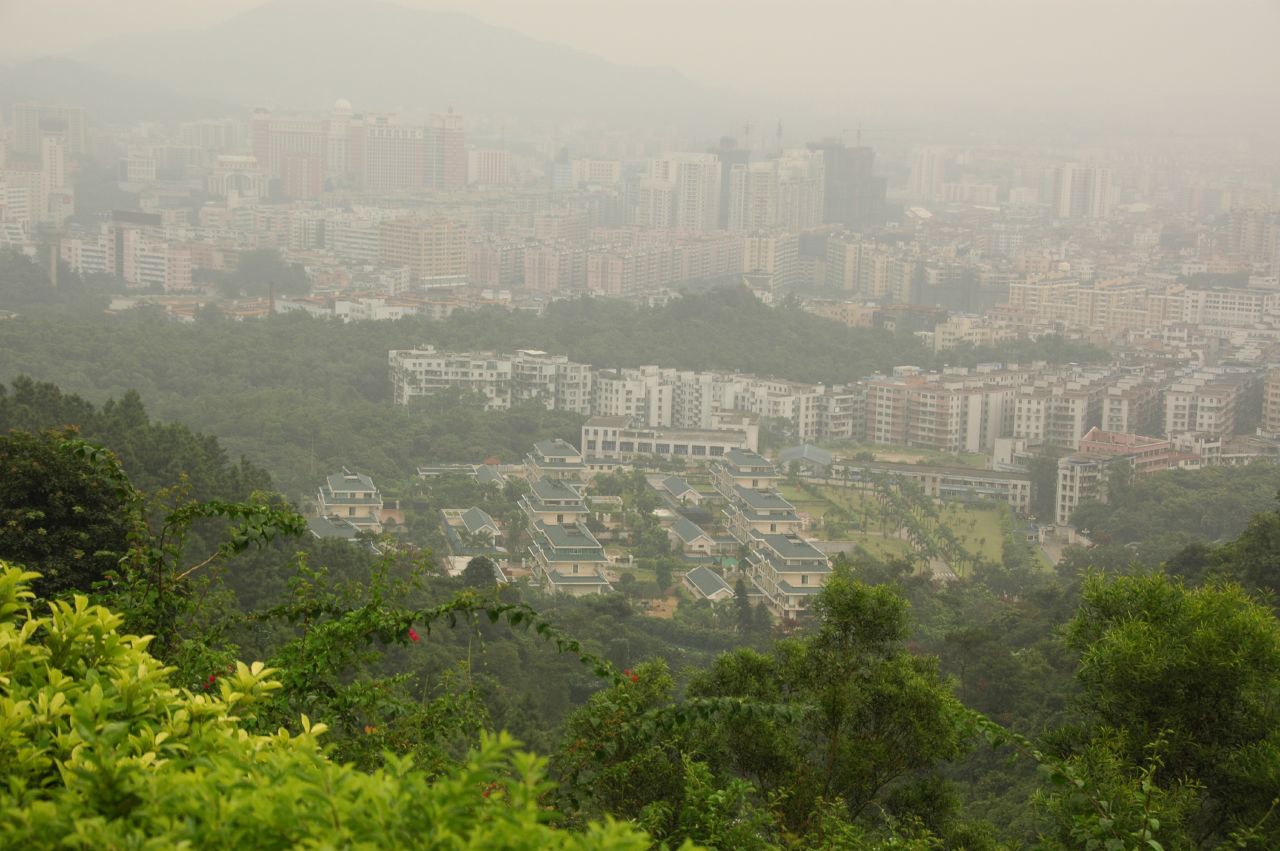 Also called White Cloud Mountain, it’s about 427 metres tall. The mountain has hiking trails, nature tours, and other attractions. The main reason to visit the mountain is that when you reach the scenic viewing spots, you can look out and see most of downtown Guangzhou.

As this is the start of your trip, it should still be early in the morning. The sun rising tends to bring a fog over the city and you can see this best from the mountain.

Unfortunately, if you want to see more of Guangzhou in 24 hours, you’ll need to leave the scenic outlooks and venture into the busy streets of the city.

Get a taste of the local cuisine in Guangyuan New Village

The path from the mountain to the downtown area takes you through Guangyuan New Village. This residential neighbourhood includes a wide variety of dining establishments.

You can find everything from dim sum to chicken nuggets. While you could play it safe and find a fast food restaurant, take the opportunity to try the local flavours.

Several of the spots along the way should offer Shuang Pi Nai, a creamy custard often topped with raisins. You could also try Yum Cha, a popular morning tea commonly served with dim sum.

Keep in mind that you don’t have a lot of time to spare. If a restaurant looks especially busy, consider trying the next one.

You may even want to order something that you can eat as you walk, such as the custard or some baked goods.

PRO TIP: Intrigued by Guangzhou’s food scene? Learn about and taste some the city’s tastiest dishes on the Guangzhou Foodie Tour!

Continue walking the residential streets until you see the green foliage of Yuexiu Park. This park is one of the most visited spots in the city, located just north of the downtown area. 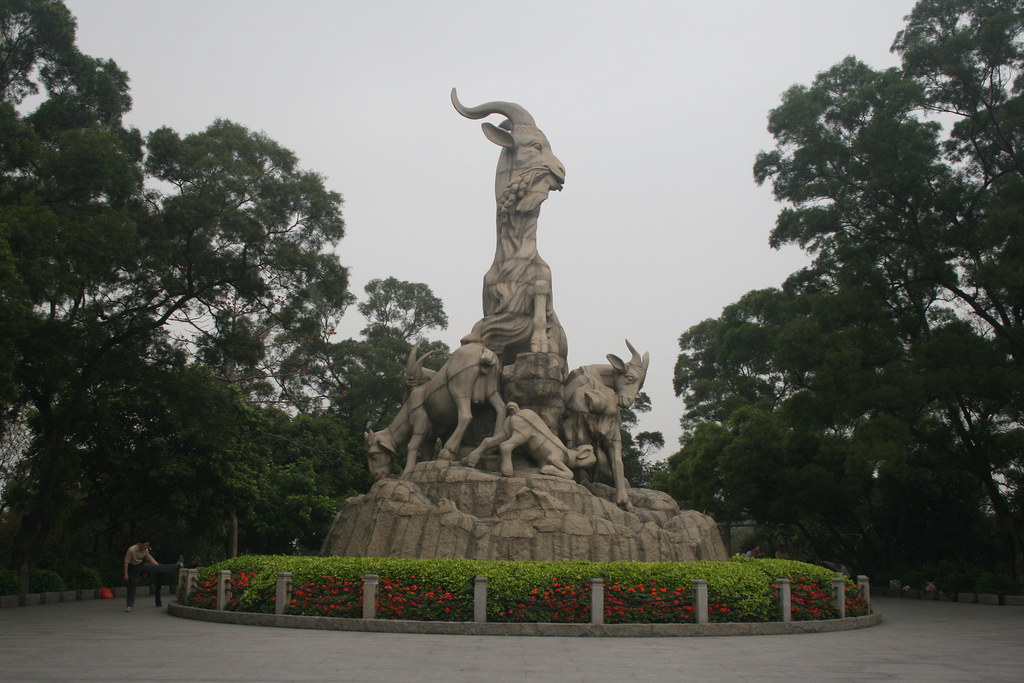 The park covers an area of more than 850,000 square metres around a large hill. It includes several interesting attractions, including the Five Rams Sculpture.

The Five Rams Sculpture was built in the 1960s. As the ram is the symbol of the city, it’s a popular local landmark.

Another highlight to the park is the Zhenhai Tower. The five-storey pagoda has a view of the city and was originally a guard tower. You can now tour a little museum housed inside.

Depending on when you visit, you may also find yourself listening to live music as you walk around the park. Built for the Asian Games in 2010, Yuexiu Stadium is at the foot of the hill. While it’s primarily intended for sporting events, the stadium also holds large-scale concerts throughout the year.

PRO TIP: Looking for company on your trip? Join in on the Guangzhou Day Tour by Metro & Boat! This professionally-guided tour includes stops in Yuexiu Park, Mausoleum of the Nanyue King, Shamian Island, and a dim sum lunch.

When you exit the park, you don’t need to walk far to your next destination. The Museum of the Mausoleum of the Nanyue King is just a short walk south. 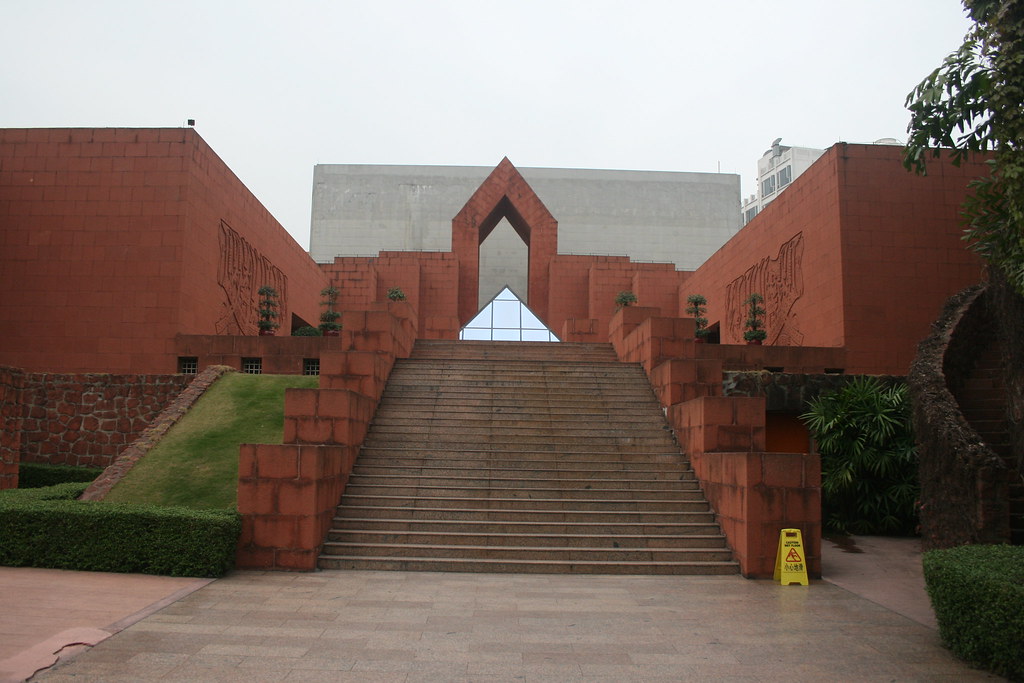 The museum includes three separate areas for you to explore. Start with the three-storey exhibition hall. It includes hundreds of cultural relics, including bronzeware and colourful murals.

The tomb is the main attraction, as it holds the remains of King Zhao Mo. You can view the jade burial suit and other interesting burial artifacts.

It’s amazing that the site was uncovered in the 1980s and holds such a large collection of treasures from over 2000 years ago.

Unfortunately, the museum doesn’t provide too much information about the items. Most of the artifacts have small placards with the name of the item in English and some extra info in Cantonese. Despite the lack of information, you should still have fun exploring the tomb and historic pieces.

PRO TIP: Want some insight into the mausoleum? Hop onto the full-day Guangzhou Day Tour by Metro & Boat! It includes stops at the mausoleum along with several other sites around Guangzhou and a public boat ride.

As with any typical itinerary through a Chinese city, this trip takes you to a historic temple. From the museum, continue walking south until you pass Memorial Hall. 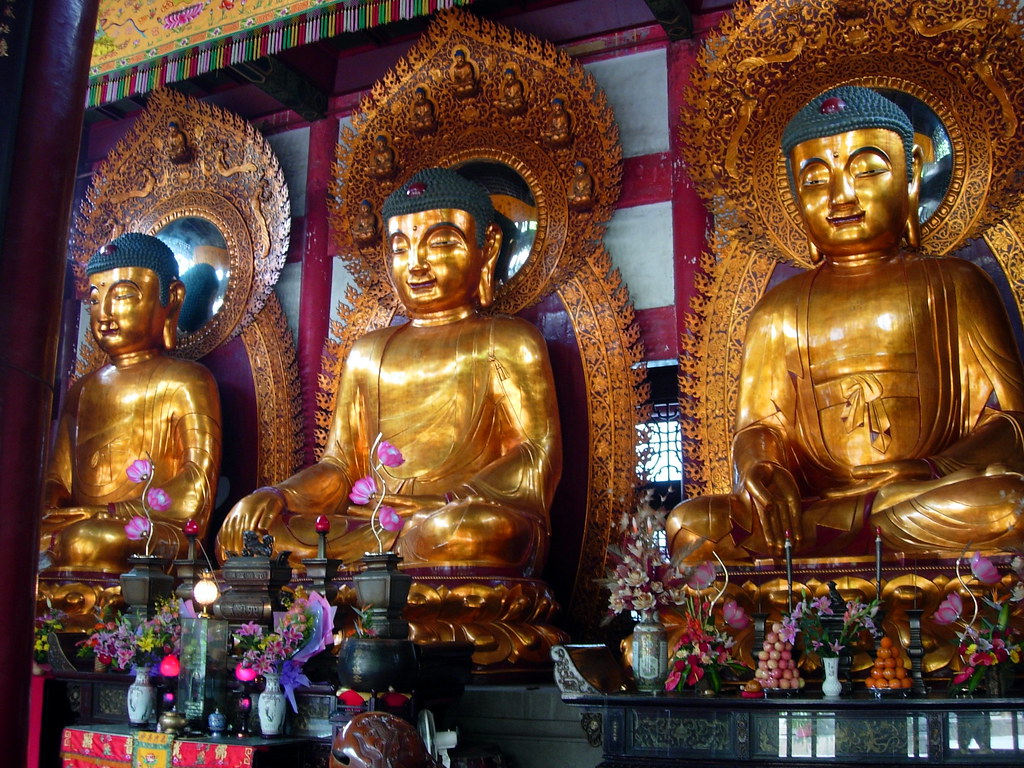 The Temple of the Six Banyan Trees is just a couple of more blocks away and on your right side. You should see the towering pagoda (Zhenhai Tower) in the distance.

The nine-storied flower pagoda is tall, but isn’t very wide. In fact, the surrounding area is relatively compact. Luckily, it’s also in a secluded spot that tends to get less foot traffic compared to the surrounding city streets.

Enjoy the peace and tranquillity of this hidden temple as you walk around the outer complex. You can also admire the banyan trees near the temple. While there used to be six of the large trees, only three remain.

Get lost among the shops at Onelink International Plaza

When you finish admiring the statues at the temple, it’s time to admire the shops at Onelink International Plaza. Keep walking south through the centre of downtown Guangzhou. 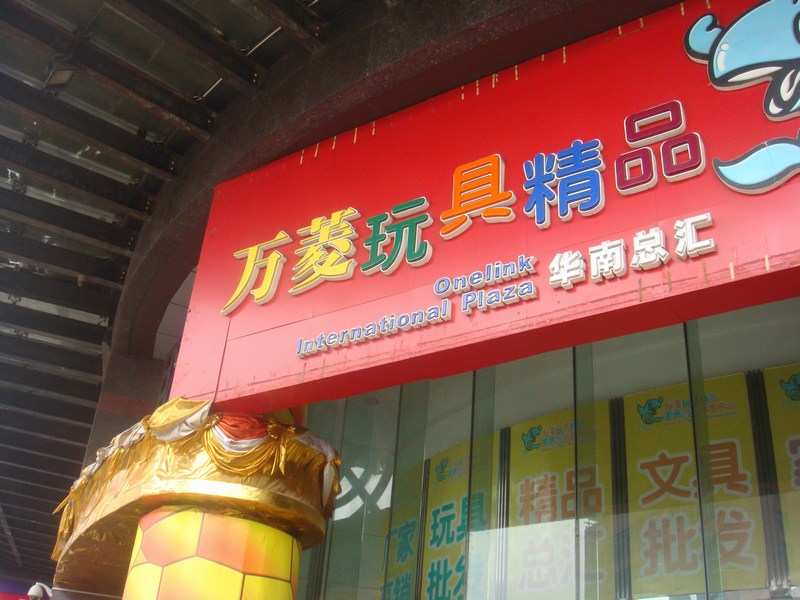 As you approach the river, you’ll start to see the commercial structures surrounding the plaza. It’s one of the main shopping areas in this part of the city and includes nine stories of stores, restaurants, and theatres.

You can find several hundred small shops across multiple levels. It’s a maze of tiny establishments selling everything from designer handbags to cell phone cases. You’ll find an eclectic mix of junk gifts and high-priced items.

You could probably spend an entire day at the plaza without visiting every shop. Try not to get lost, as you’ll need to move onto the next destination after an hour or two of shopping.

Get a view of the mountain from Canton Tower

One of the final stops is the most iconic landmark in Guangzhou. Canton TV Tower stands over 600 metres tall, but it’s a bit far from the plaza. 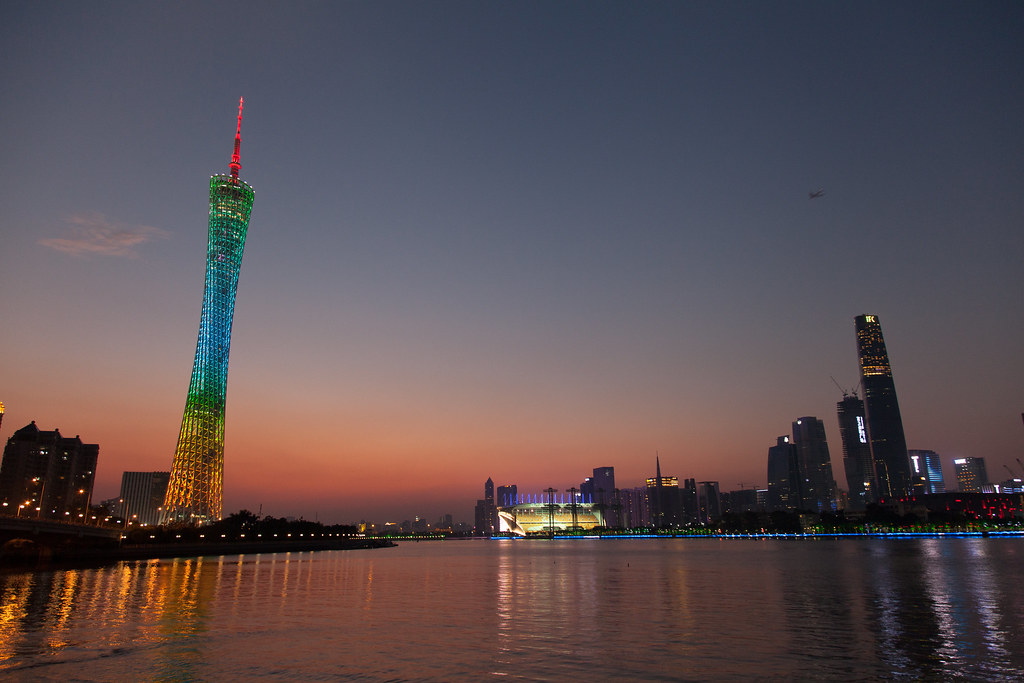 With just 24 hours in Guangzhou, you can’t cover too much ground on foot. To reach the tower, consider taking a taxi or hopping on a bus. It’s a 20-minute ride, but a 60-minute walk.

The tower is another spot built for the Asian Games in 2010. It was the tallest structure in the country before the completion of the Shanghai Tower.

It’s still an impressive landmark just east of downtown Guangzhou and has plenty to keep you occupied. Inside the tower, you can do a little more shopping or find something to eat. If you have time, ride the transparent passenger car that takes you around the rim of the rooftop.

There are lots of things to do & see in Guangzhou and you can see most of them from the top of the tower. You may even see the top of the mountain from the viewing platform or passenger car. You can gaze over the city to see where your trip started.

PRO TIP: Need help with navigating Guangzhou in the evening? Join in on the Private Guangzhou Night Tour including a visit to the observation deck of Canton Tower! 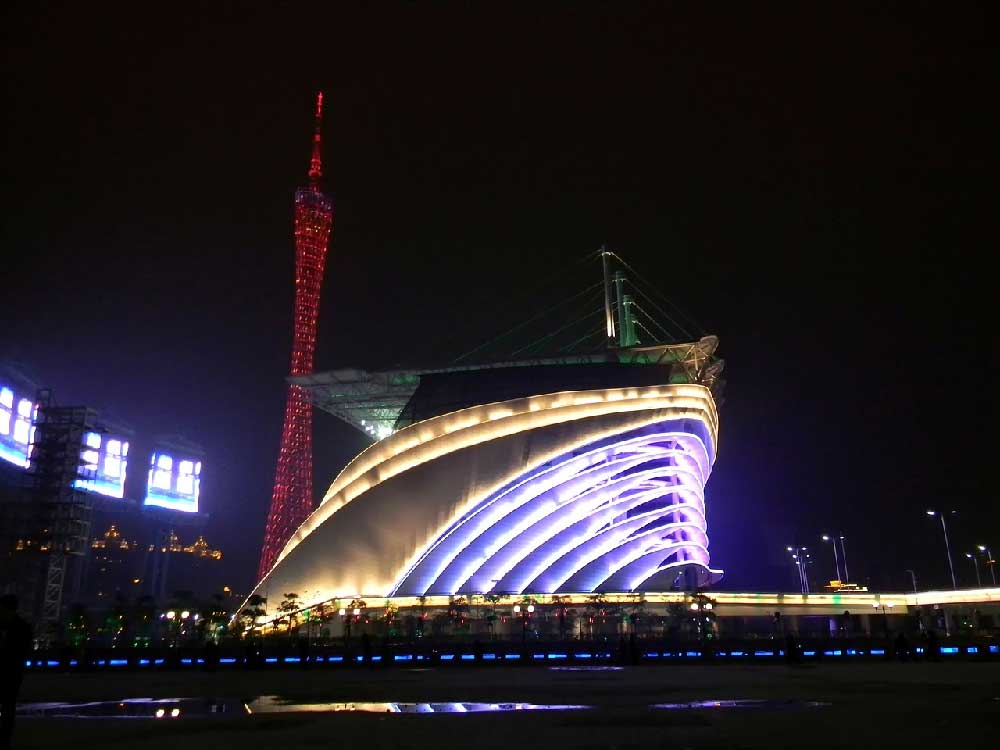 As the name suggests, this plaza is where you go for partying in Guangzhou. Party Pier Plaza is a crowded bar street with many clubs and restaurants. It also offers great views of the river and the skyscrapers on the other side.

The party hub of Guangzhou tends to attract a lot of revellers. The crowded plaza remains lively throughout the night, with many establishments opening at 11 pm and closing around 6 or 7 am.

You’ve travelled through a large part of Guangzhou in one day, but haven’t seen it all. The next time you visit, try to explore more of the temples, museums, and other attractions the city has to offer.

PRO TIP: Want to make some new friends in Guangzhou? Book yourself onto the Private Guangzhou Night Tour where a professional guide will lead you through Guangzhou’s party areas in search of the city’s best bars, clubs, food, and drinks!

Where to stay: The best hotels for 24 hours in Guangzhou

As with any sprawling Asian city, choosing where to stay in Guangzhou isn’t always so simple. For most travellers with a quick layover in Guangzhou, the areas of Yue Xiu and Tian He are great choices as they offer a wide selection of accommodations in a convenient central location. Here are few recommended places to stay…