Hanoi is the capital city and one of the top travel destinations in Vietnam. It’s known for its rich culture and historic architecture that blends French, Chinese, and Southeast Asian influences.

Once ravaged by war, and run by a government that kept the outer world at bay, Vietnam is quickly making up for lost time and quickly evolving to a world-class destination. There are still layers of history here, with buildings that reflect the city’s past French and Chinese occupations.

With one day in Hanoi, you’ll get a taste for the city. It’s a sprawling capital with millions of residents and a lot to explore. In the hectic Old Quarter, the narrow streets contain endless small shops and little temples. In the surrounding countryside, you’ll find large parks, scenic trails, and traditional Vietnamese villages.

Don’t know where to go? Plan your tour of the city with this complete 1-day Hanoi itinerary…

Where to go in Hanoi in 24 hours: A complete one-day itinerary

Hanoi is a great city to explore on foot if you stick to the city centre. If you want to see the attractions outside the metro area, you’ll need to plan a longer trip.

With just 24 hours in Hanoi, you still get to visit a lot of attractions. As with all our one-day city itineraries, this trip includes the most important landmarks along with the city’s best dining and shopping. You’ll visit ancient temples and pagodas, sprawling markets, and a palace before the end of the day.

Located on a small island in West Lake, Tran Quoc Pagoda stands above the surrounding landscape. The 11-story pagoda is also the oldest of its kind in the city. 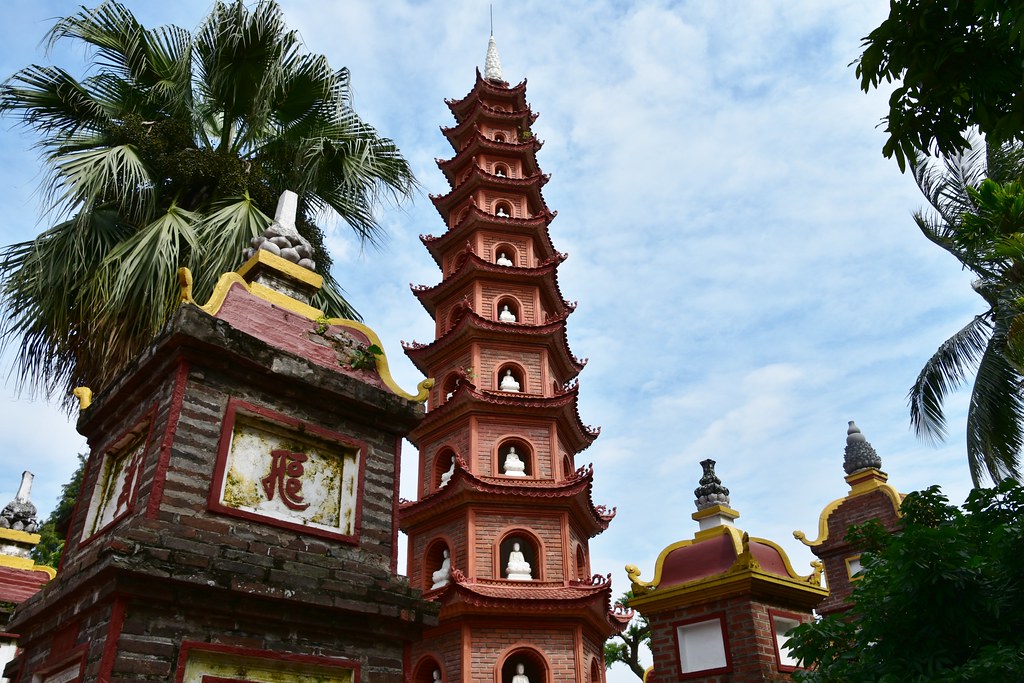 A bridge containing the American War Memorial cuts across the lake, providing access to the small island. Next to the tower sits a Buddhist temple with various shrines and relics, but the real attraction is the scenery.

The lake, pagoda, and temple structures offer a tranquil setting to start your journey. You should also be able to find something to eat. You’ll typically find a few vendors selling street food and souvenirs near the entrance.

Depending on where you stay in Hanoi, you may need to take a taxi to this first destination. Try to arrive by 8 am to beat the crowds and give yourself more time to explore Hanoi in 24 hours.

From the pagoda, take the bridge south into downtown Hanoi to visit the Presidential Palace Historical Site. It’s a 15-minute walk across the bridge and several blocks south of the lake.

The grounds include a cluster of historic attractions. You can see the Presidential Palace, Ho Chi Minh’s Stilt House, and One Pillar Pagoda, making it a must-see destination for your Vietnam itinerary.

The site was originally the home of the Presidential Palace for the Governor-General of Indochina during French colonial rule. The architecture features distinct European elements, from classical columns to wrought iron gates. After the country achieved independence, Ho Chi Minh refused to live in the palace, erecting his stilt house on the grounds.

After a short tour of the palace, visit the stilt house and adjacent carp pond. It’s a complete contrast to the French Colonial style of the original palace.

If it’s still before noon, you may have time to check out the One Pillar Pagoda just south of the stilt house. The historic Buddhist temple includes a small, square pagoda resting on a short pillar in the middle of a pond.

The cultural and historic sightseeing tour of Hanoi isn’t over after the palace, as your next stop is the Imperial Citadel. Follow the road directly in front of the palace for two blocks and turn right when the road ends. You’ll see the citadel standing at the end of the block. 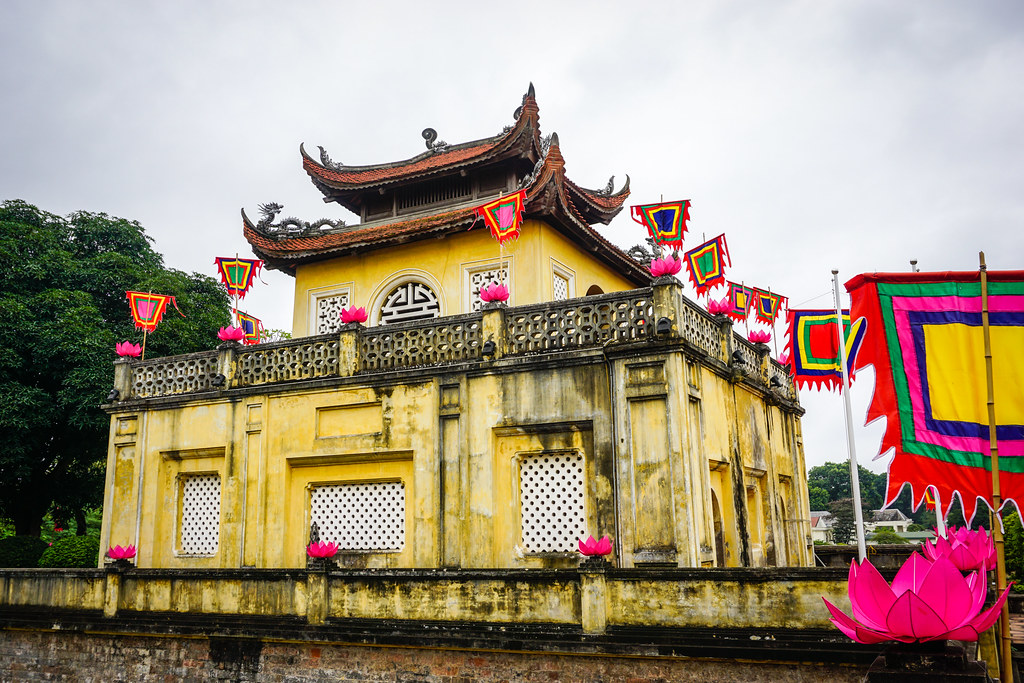 The citadel and its surrounding buildings were home to the Vietnamese royal court. The main gate to the complex and several of the buildings remain intact and open to the public. You can pass through the gate and explore an underground bunker, the remains of the royal palaces, and the Flag Tower of Hanoi.

The tower stands over 30 metres tall and was one of the few structures undamaged during the French occupation. As you wander around these historic sites, stop inside the onsite museum.

Make way for the train at Hanoi Train Street

Quickly walk east a few blocks to the narrow streets of the Old Quarter. One of the first streets you’ll reach is Hanoi Train Street. It looks the same as the other streets in the crowded Old Quarter, other than the railroad tracks running down the center. 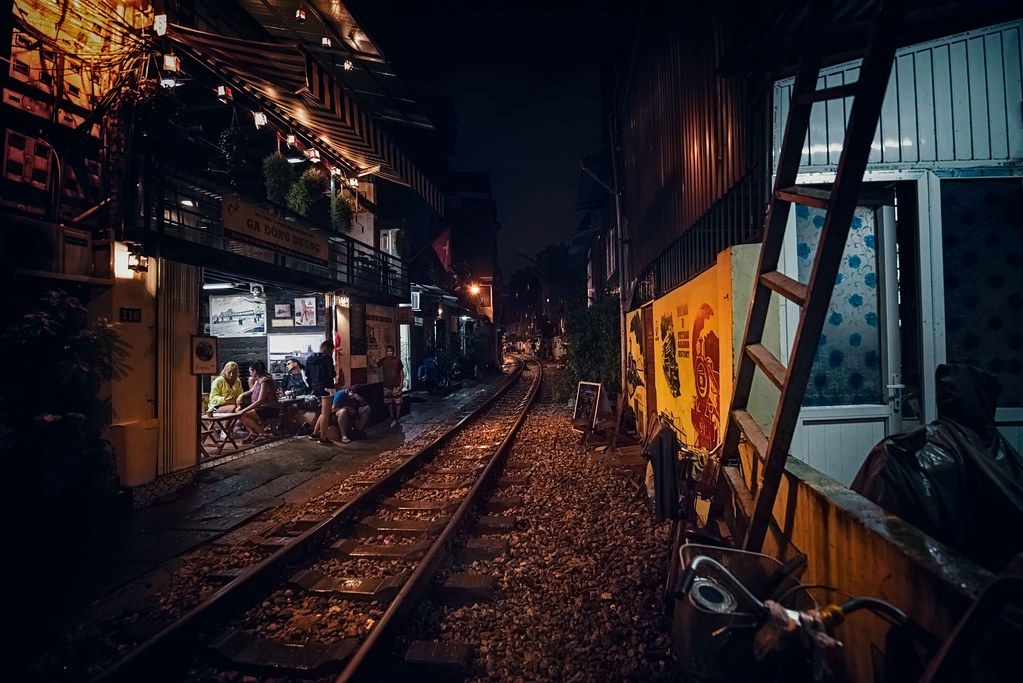 Each side of the street contains rows of residential buildings. Locals water plants, dry clothes, or watch their children play on the narrow strips of concrete bordering the tracks. You’ll even see a few vendors and food stalls here and there.

A trip to Train Street is one of the more interesting things to do & see in Hanoi, especially if you arrive at the right time. At about 3 pm and 7 pm each day, a train travels down the track, taking up almost the entire street.

Locals know when to expect the train and hurry to move their items and children inside. You should arrive in time for the 3 pm passing.

Fill up on unique local cuisine at Dong Xuan Market

After the train passes, there isn’t much to see on Train Street. Start walking north, skirting the outer edge of the Old Quarter, until you reach Dong Xuan Market. 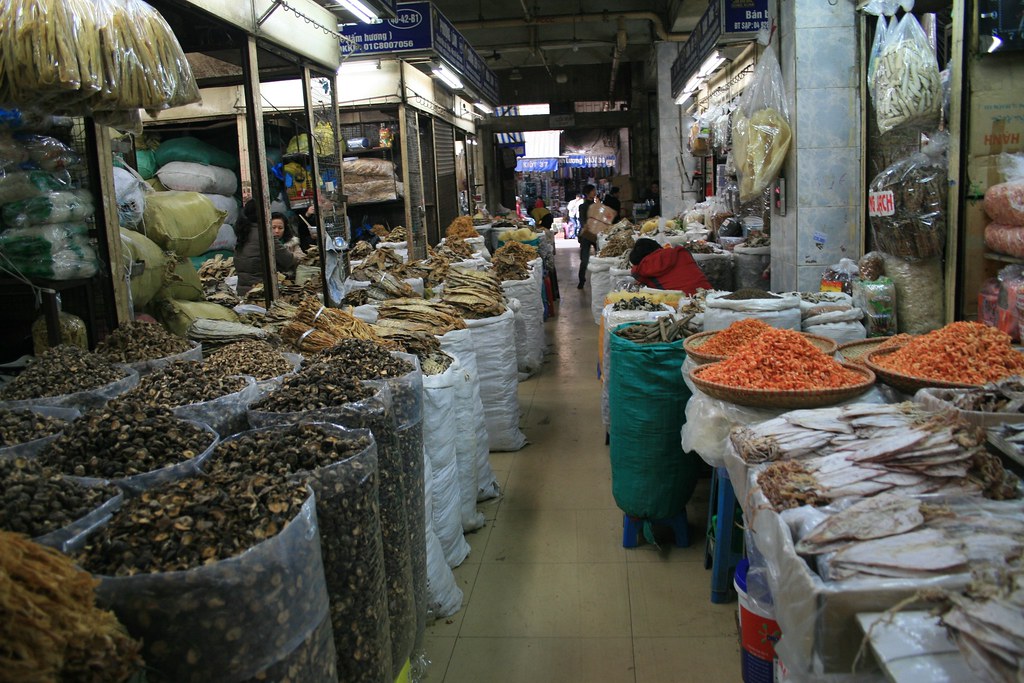 A quick tour of Hanoi in one day needs to include a few stops for food and shopping. Dong Xuan Market is one of the largest marketplaces in the city.

It’s an indoor facility with three stories containing hundreds of stalls. While a lot of the vendors sell clothing and accessories, you’ll also find quite a few food stalls and several restaurants. If something catches your attention, stop and give it a try.

The market is also a great place to fill up on souvenirs. Find magnets, keychains, and other knick-knacks to take home as gifts for friends and family.

While you can find a wide array of food and souvenirs inside the market, it’s not the most comfortable place to visit. It has poor ventilation, making the air incredibly hot, humid, and potentially unhealthy. It’s also one of the busiest spots in Hanoi, especially in the afternoon when you’ll visit.

If the atmosphere is too much for you, take a quick stroll through the front part of the market before travelling to the next site.

A five-minute walk from the market is the most lavish temple and historic site on your Hanoi itinerary. Bach Ma Temple isn’t the largest temple, but it’s packed with relics and artifacts.

The interior also features intricate carvings and artwork throughout. There’s so much to see, it’s dizzying and difficult to take it all in.

If you want to learn more about the temples of Hanoi, take a guided tour, but it’s not required. While the inside of the temple contains hundreds of items and details to examine, it shouldn’t take long to tour the small building. You may also need to hurry along, depending on the time, as the temple closes in the evening.

After touring the ornate temple, travel a block south to reach the bustling night market. Filled with lively stalls, you can find a little bit of everything. It opens at 6 pm and quickly becomes one of the most crowded parts of the city. 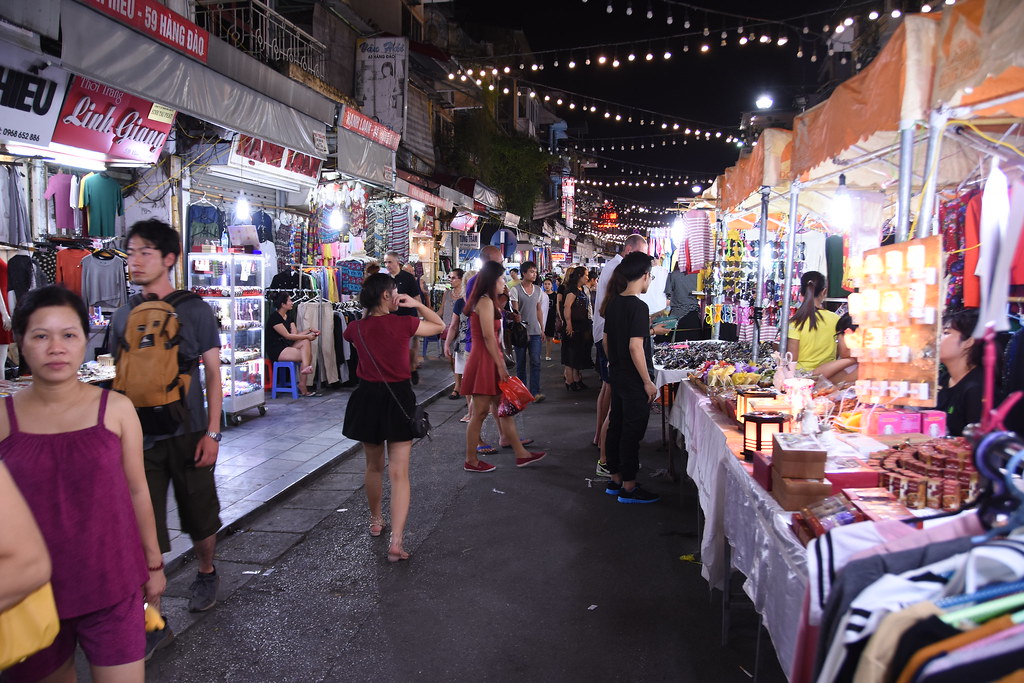 Vendors start setting up around 6 pm, so it’s best to arrive closer to 7 pm or 8 pm. It’s also only open on the weekends.

If you’re in Hanoi on Friday, Saturday, or Sunday, spend the rest of your evening wandering around the market. It covers a couple of streets, filled with stalls and people. You can sit outside a restaurant and enjoy dinner as you watch thousands of locals and tourists bustle past.

After eating a meal or trying the street food, shop the stalls. The prices tend to be a little less expensive compared to Dong Xuan Market, with plenty of bargains on clothes, souvenirs, and local handiwork.

To get away from the crowds for a little bit, consider taking a short tour on the river. Look for small boats docked near the river with little lights. The tours tend to last just a half-hour, but provide a different view of the city at night.

If you’re already tired of shopping after the trip to Dong Xuan Market, skip the night market and enjoy a puppet show. Located a couple of blocks from the market, the Thang Long Water Puppet Theatre offers a unique experience. Puppets dance across a pool of water that serves as the stage while music accompanies the scenes.

Surprisingly, it’s not the only puppet theatre in Hanoi. If you want to try a different show, check out the Lotus Water Puppet Theater on the west side of the lake.

Where to stay: The best hotels for 24 hours in Hanoi

Surprising for its size, choosing where to stay in Hanoi isn’t as difficult as you might imagine. For most travellers with a quick layover in Hanoi, the best areas to stay include Old Quarter and Ba Dinh District. Here are a few ideas…

Beyond Hanoi in one day: More Southeast Asia itineraries