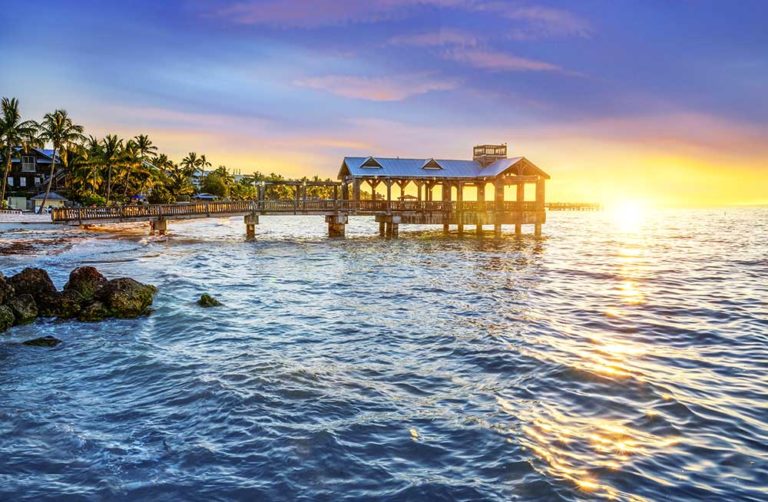 Spending time on an epic road trip through Florida? Squeeze in at least one day in Key West. The westernmost island in the Florida Keys, Key West is the archipelago’s most popular travel destination.

During your first 24 hours in Key West, you’ll get a taste of the island’s unique Caribbean-inspired vibe. In its Bahama Village, you’ll stroll past colonial-style Caribbean houses. (One was even home to literary legend Ernest Hemingway!) You’ll marvel at dramatic sea views & beautiful sunsets from blissful white-sand beaches. And you’ll drool over signature dishes like conch fritters and key lime pie.

Ready to learn where to go in Key West in one day? Follow along with this complete 1-day Key West itinerary.

Looking for more ideas for your trip? Check out our other city itineraries and our Florida Travel Guide for more recommendations on when to visit, where to go & what to do!

Where to go in Key West in one day: A complete 1-day itinerary

Start your one day in Key West at the Bahama Village. The historic Bahama Village neighborhood is famous for its Caribbean-inspired vibes. You’ll catch its tropical influences in everything from its historic homes to its food and music. 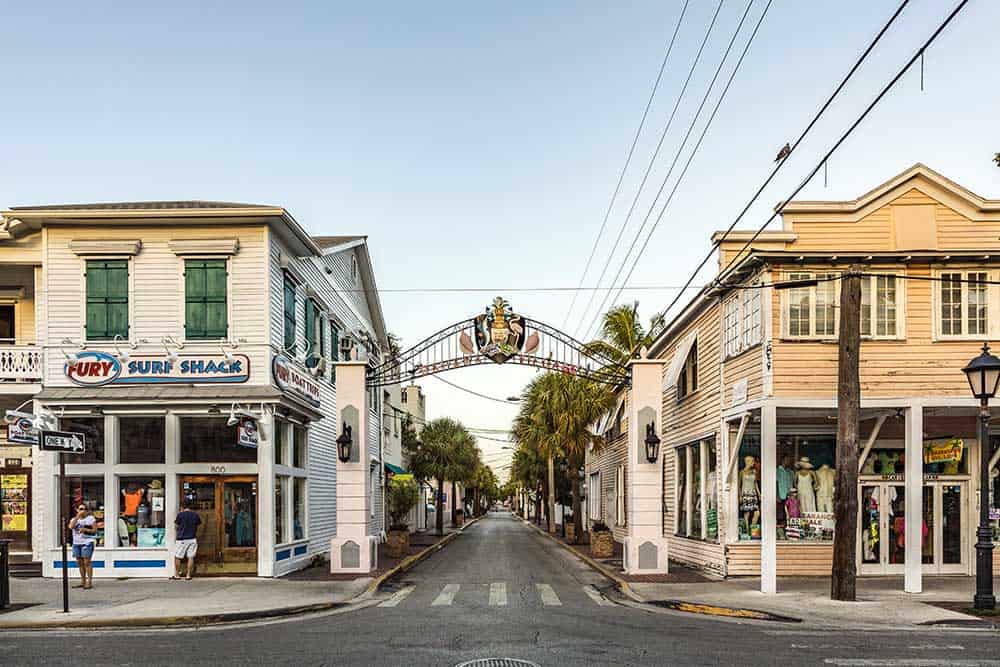 Since you’ve got a long day of sightseeing in Key West ahead, fuel up with a hearty breakfast at Blue Heaven. The landmark restaurant is one of Key West’s most iconic places to eat. The food at Blue Heaven toes the lie between authentic Floridian and Caribbean fare.

Breakfast choices here include tropical pancakes, eggs benedict, and breakfast sandwiches. If you’re up for a rich start to the morning, indulge in its famous key lime pie.

Dazzle at the views from the Key West Lighthouse

Only a couple blocks from Blue Heaven, you’ll stumble upon the Key West Lighthouse. The 65-foot historic lighthouse dates back to 1825. Although decommissioned, it remains one of the island’s most recognizable landmarks. It’s a must-see during your first 24 hours in Key West. 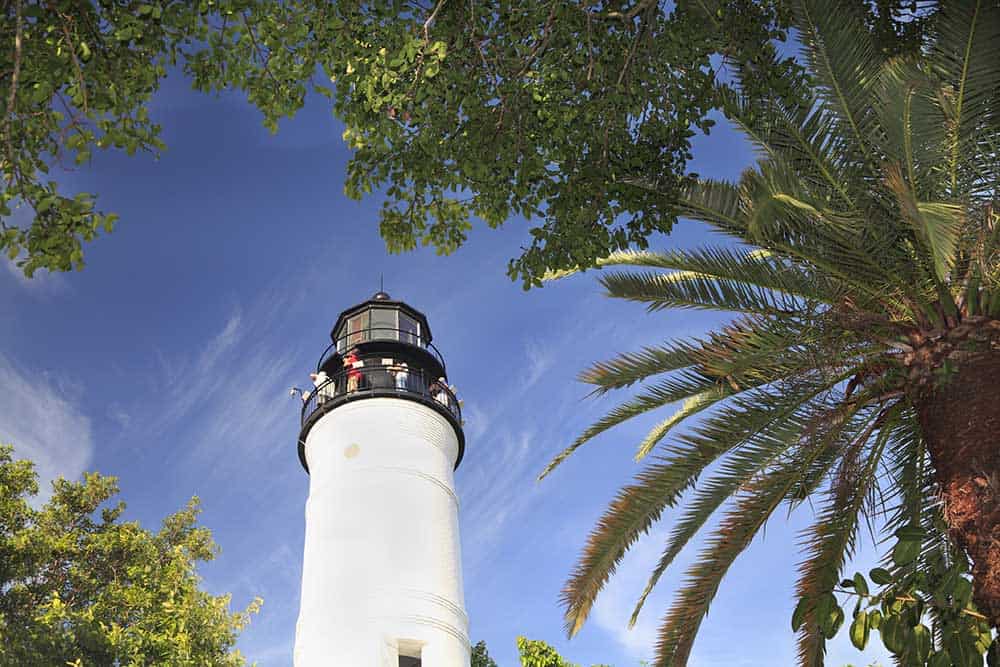 Set aside time to climb up the 88 steps to the top of the tower. From atop the lighthouse, you’ll dazzle at spectacular views over the city, the Atlantic Ocean, and the Gulf of Mexico.

On the block kitty-corner to the lighthouse, you’ll find the Ernest Hemingway Home & Museum. Also referred to as Hemingway House, the property was once the South Florida home to “Papa” himself. 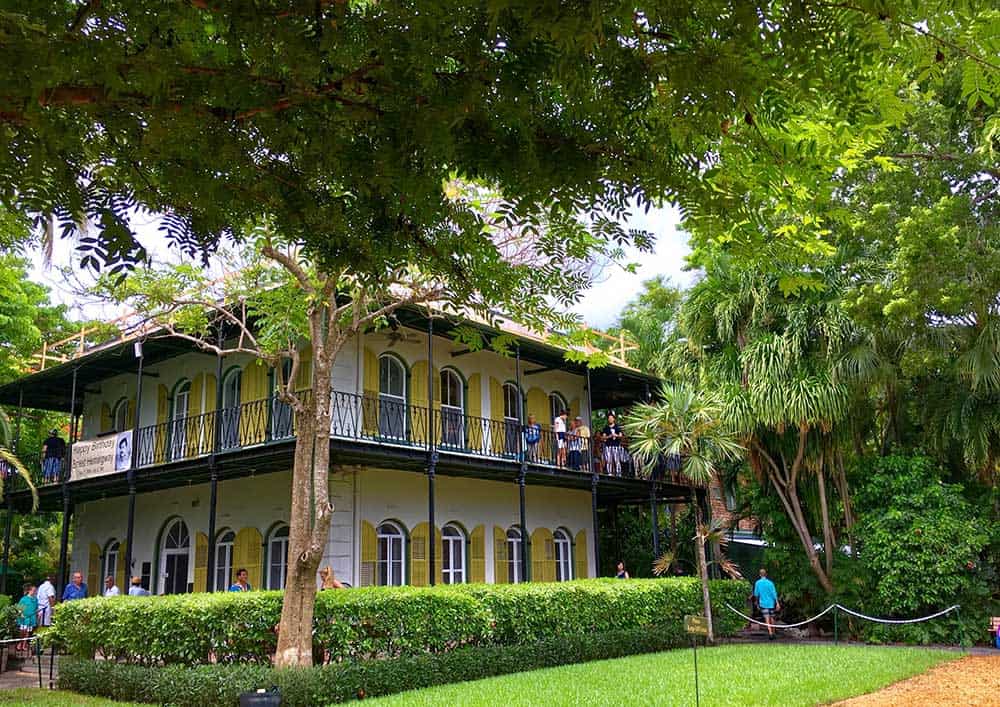 Living at Hemingway House, the literary legend was at his most prolific. While in Key West, Hemingway penned the final pages to his landmark A Farewell to Arms. He also completed several other famous works, including Green Hills of Africa, The Snows of Kilimanjaro, and To Have and Have Not.

Visiting the Hemingway home, you’ll be able to tour its museum and roam through its gardens. Keep an eye out for the six-toed cats that descend from Hemingway’s own feline friends. Be sure to pick up a unique literary souvenir at the bookstore and gift shop. (A copy of Old Man and the Sea, maybe?)

Marvel at the Key West Butterfly and Nature Conservatory

From Hemingway Home, it’s less than 10 minutes by foot via Duval Street to the Key West Butterfly and Nature Conservatory. Visiting the family-friendly habitat is one of the most popular activities in Key West. 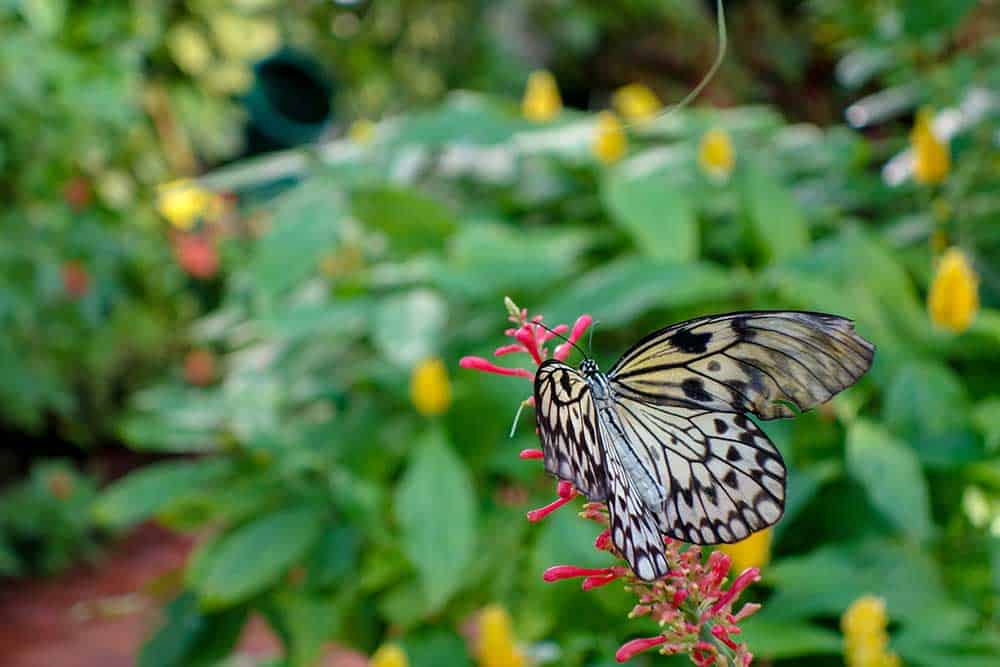 At the conservatory, you’ll spot more than 60 species of butterflies in a variety of shapes and colors. Over 20 species of exotic birds also chirp around the habitat.

Most of the excitement takes place within the climate-controlled glass-domed conservatory. The attraction also includes a learning center, gift shop, and art gallery to peruse. Admission is $12 for adults and $8.50 for children.

Visit the Southernmost Point of the Continental US

Key West is the southernmost city in the United States. Get definitive proof by walking a block southeast. On the southern edge of the island, you’ll spot the Southernmost Point of the Continental US. 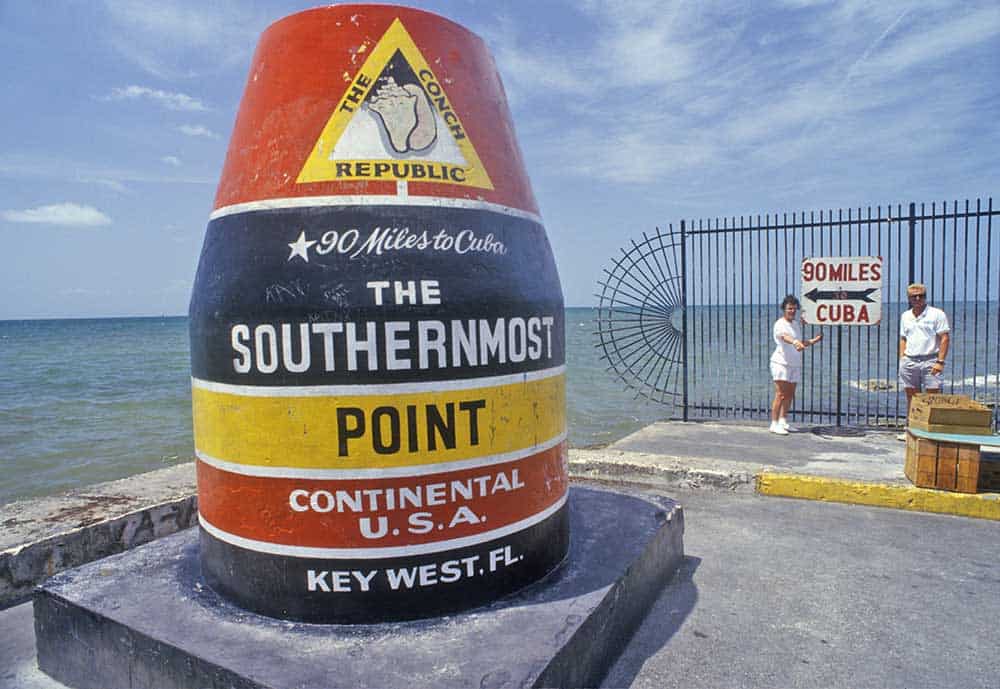 From early morning to evening tourists begin lining up to get their selfies with the colorful buoy. Even if you lack the patience to wait for your photo op, the neighborhood around the point is quite charming. There are plenty of places to grab a bite to eat & a drink. (And, hey, you’re on vacation in Florida, so why not?)

For stunning sea views, pull up a chair a the Seaside Cafe at the Mansion. It’s a great spot to enjoy cocktails and pizza to a gentle breeze. To indulge in seafood, grab a lobster sandwich at The Lobster Shack. Or for coffee and a Cuban snack, grab a cortadito and a Cuban sandwich at Ana’s Cuban Cafe.

From the Southernmost Point, it’s a 10-minute walk to Fort Zachary Taylor State Park. The historic park is located on the southwestern tip of the island.

Fort Zachary Taylor Historic State Park offers plenty for history buffs. The state park’s namesake fortress dates back to the Civil War era. It’s home to the world’s largest Civil War armament cache. Fort Zachary Taylor was once one of the most important structures for defending the coast of the Southeastern USA.

As interesting as the fort is, the real reason to visit Fort Zachary Taylor Historic State Park is for its beach. It’s often considered the best beach in Key West. If you grabbed takeout, it’s the perfect spot for a picnic. You can also take to the water to go swimming, paddle-boating, or even on a fishing excursion.

Watch the sunset at Mallory Square

Shredded a little stress at the beach? It’s time to rev up the engines again. Head back inland. Within 15 to 20 minutes, you’ll land at Mallory Square. The square sits on the northwestern edge of Key West. It’s one of the city’s most popular public places.

Mallory Square is most famous for its nightly sunset festival. Every night before the sun creeps below the Gulf of Mexico, the square fills with street performers of all kinds. During this popular activity, you’ll see everything from tight ropewalkers to sword-swallowers. It’s a fun-filled family-friendly affair that’s bound to put a smile on your face. (Even if it’s a bit kitschy.) 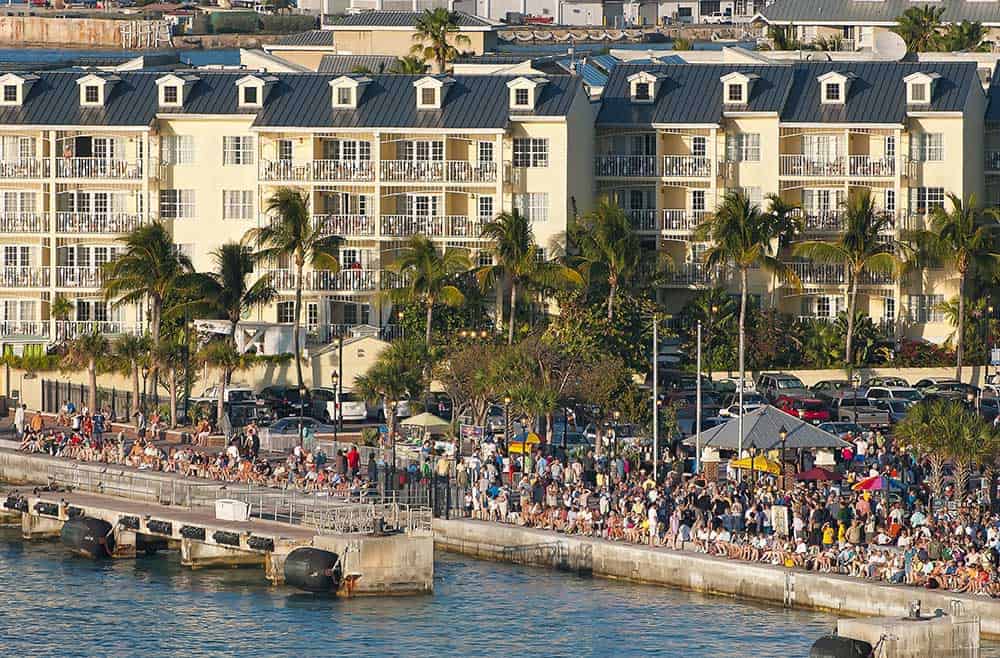 Of course, the entertainment is just a sideshow. The real star is the dramatic Key West sunset. And Mallory Square is one of the best places to catch it. Settle down along the pier to watch the sun dip slowly below Sunset Key to the west.

If you want more space for your sunset-viewing experience, grab a seat at one of the restaurants surrounding the square. For Cuban-inspired food & drinks, hit up El Meson De Pepe’s Restaurant & Bar. The Sunset Pier at the northern edge of the square is another brilliant option.

Enjoy dinner and drinks along Duval Street or Whitehead Street

Once the sun has taken its leave, walk back into the heart of the city. The evening beat of Key West pulses along Duval Street and Whitehead Street. The two avenues are home to many of Key West’s best restaurants & bars. It’s the perfect bookend to your tour of Key West in one day. 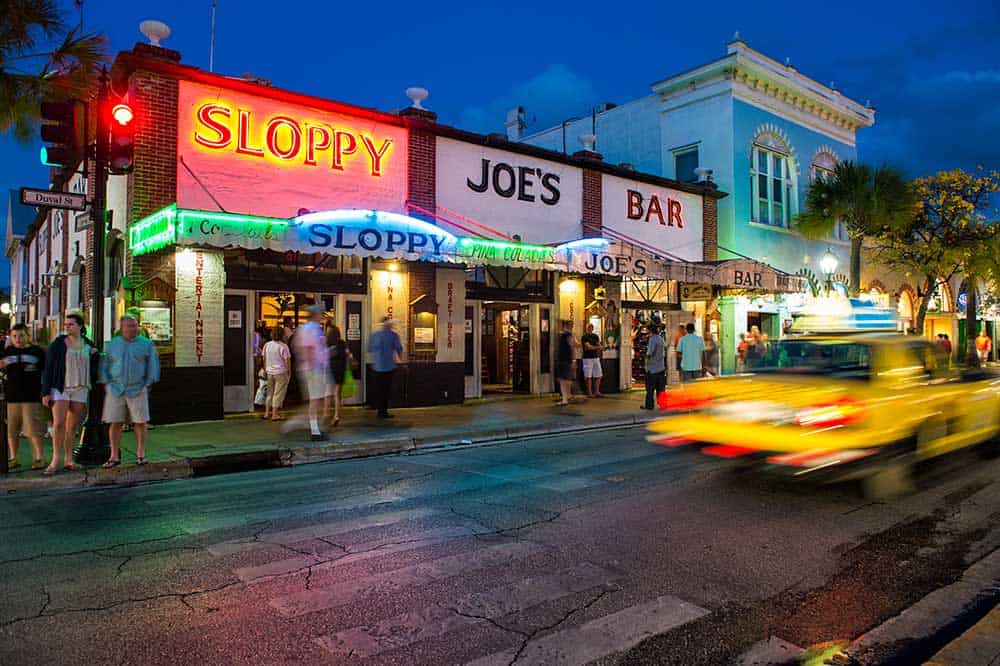 There’s a number of great places along these two strips. For classic pub food & laid-back drinks, indulge at Sloppy Joe’s. This famous Key West restaurant has been open since 1933. The nearby Green Parrot Bar is another historical option. The Green Parrot Bar has served cocktails to travelers and residents since 1890.

Where to stay with 24 hours in Key West

The biggest challenge in choosing where to stay in Key West is availability rather than location. Many of the best places to stay on the island are within walking distance of the top points of interest. Narrow your search to the city center, particularly Bahama Village and the Historic District. 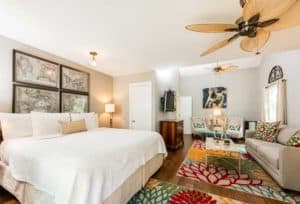 Sitting near the center of town, this excellent B&B offers rooms to cover most travel budgets. Most intriguing is the hotel’s garden-like courtyard and sun terrace. 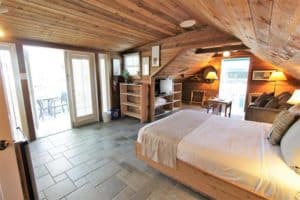 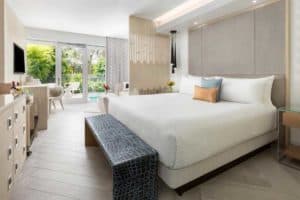 For a romantic couples getaway, this luxury hotel is perfect. It’s mere minutes from the city’s top tourist attractions. Splurge on one of its deluxe king rooms to relax by your own private pool.

Want to enjoy a quiet sunrise on the beach? Venture off to Higgs Beach. The beach is located on the southern shores of the island. 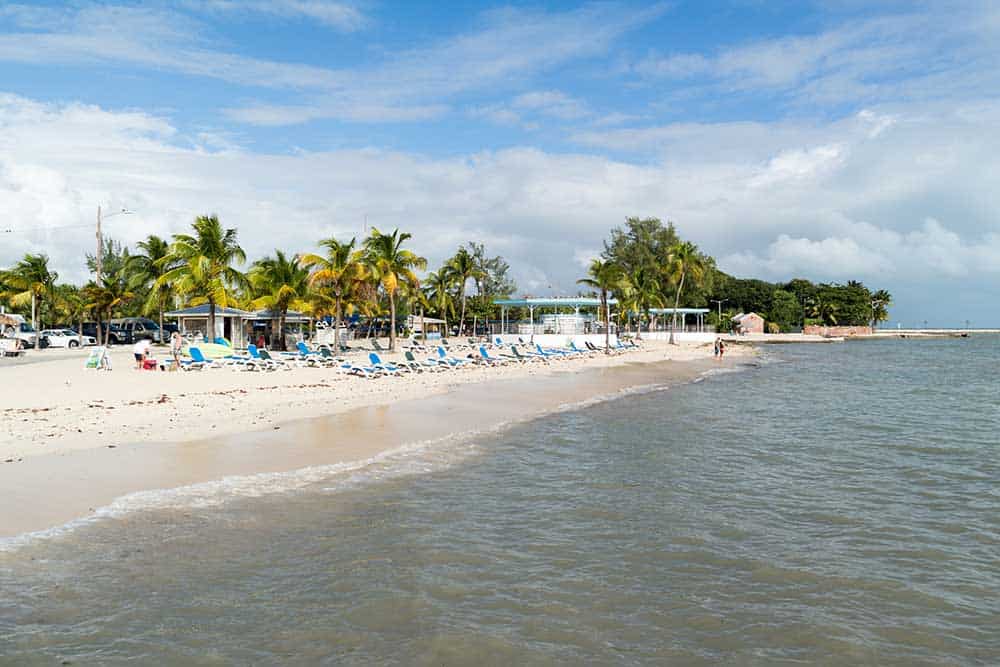 Aside from its white sands, Higgs Beach is also home to a couple noteworthy historical attractions. In the park lies the country’s only African refugee cemetery. Elsewhere, you’ll also find the largest AIDS memorial in the USA and a historic fortress tower.

Searching for one of the best day trips from Key West? Sail for Dry Tortugas National Park. The small chain of islands lies about 70 miles west of the Florida Keys.

Only about 60,000 tourists visit Dry Tortugas National Park every year. Most narrow their visit to Garden Key, the only island accessible via public ferry. 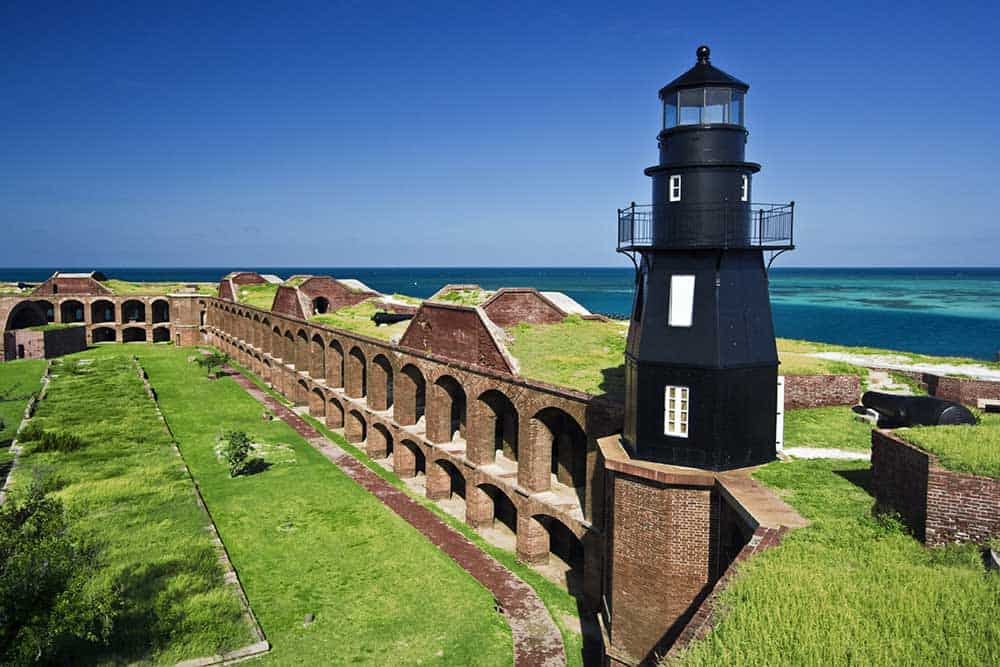 The island is home to Fort Jefferson. The large octagonal fortress dates back to 1845. Although it was never completed, it’s the third-largest fort in the United States.

Besides learning about the rich history of the fort, visitors can partake in various water sports. Bring along a snorkel & mask to spot the park’s diverse marine life and coral reefs. Or paddle around the fortress in a kayak to goggle at it from sea level.

Only got time for one Key West day trip? Set your sights on Bahia Honda State Park. Less than an hour’s drive from the city, the state park is home to incredible white-sand beaches. 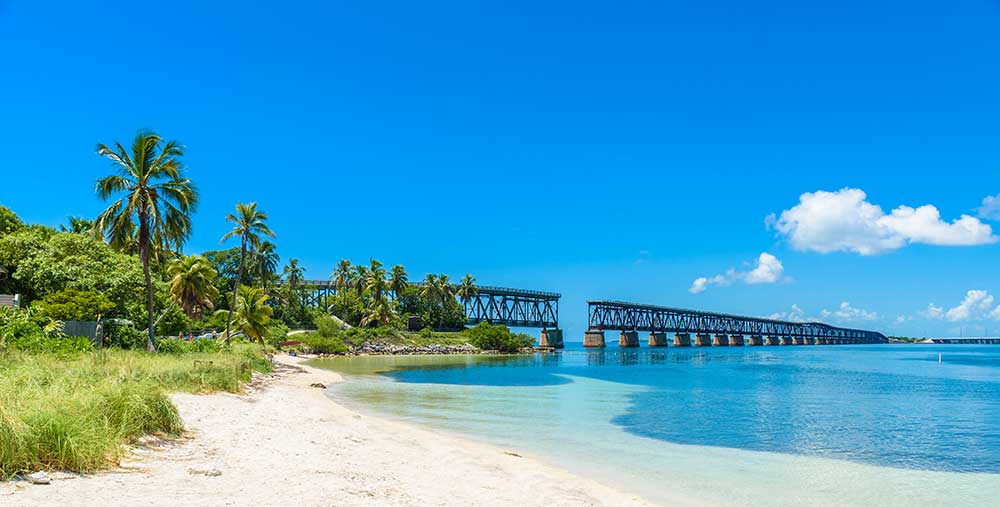 The best way to experience Bahia Honda State Park is with a walk along one of its hiking trails. On the trails, you’ll walk past over 150 species of unique flora. The park’s interior is also a hot spot for bird-watchers.

When to visit Key West

The best time to visit Key West is between March and May. Starting in March, the winter high tourism season crowds begin to peter out. You’ll enjoy cheaper accommodation prices and better availability during these months. 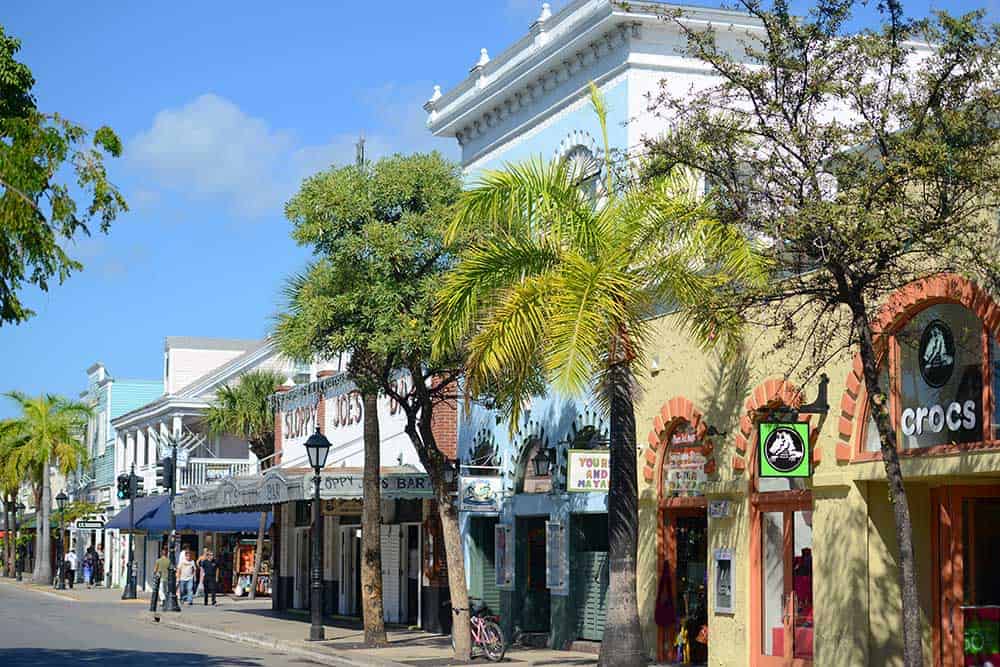 Between March and May, the weather is still excellent. Average temperatures are between 20ºC to 30ºC (70ºF to 85ºF). These spring months are also among the driest of the year.

Hurricane season in South Florida runs between June and November. You’ll want to avoid traveling to the Florida Keys during this time. If you must, be sure to stay on top of the weather situation. (Nothing like an Atlantic hurricane to dampen the mood, right?)

How to get to Key West

Key West is served by Key West International Airport (EYW). The airport is located on the southeastern shore of the island, about 4 miles (6.4 km) from the historic center. Several major airlines fly into EYW from US destinations, including:

Key West and the Florida Keys are connected to the rest of Florida via State Hwy A1A. Popular routes and estimated driving times include: