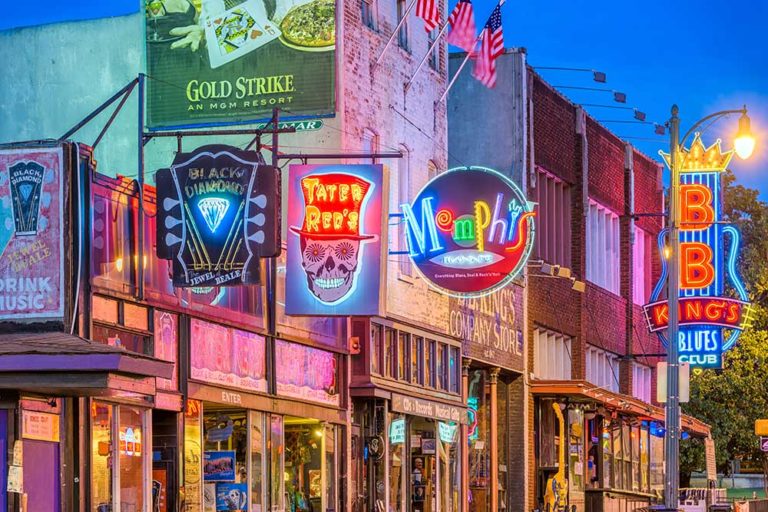 No Tennessee road trip is complete without spending at least one day in Memphis. The biggest city on the Mississippi River, Memphis is world-famous for its blues & soul music, BBQ delights, and, of course, Elvis Presley.

During your first 24 hours in Memphis, there’ll be plenty to see & do. You’ll stroll through Elvis’s historic Graceland mansion. You’ll leap into Memphis’s mouth-watering BBQ scene. You’ll learn more about the importance of Memphis to the civil rights movement and American rock & roll, blues, and soul music. And, finally, you’ll experience the buzz of Beale Street, one of the most famous entertainment districts in the United States.

Ready to plan out what to see & where to do in Memphis in one day? Get started with this complete 1-day Memphis itinerary for first-time visitors.

Looking for more ideas for your trip? Check out our other city itineraries and our USA Travel Guide and Tennessee Travel Guide for more recommendations on when to visit, where to go & what to do!

Where to go in Memphis in one day: A complete 1-day itinerary

Pay tribute to Elvis at Graceland

Only got one day in Memphis? Start with a tour of Graceland. Located about 15 minutes south of the city center, Graceland was the former home of Elvis Presley, the King of Rock ‘n’ Roll. 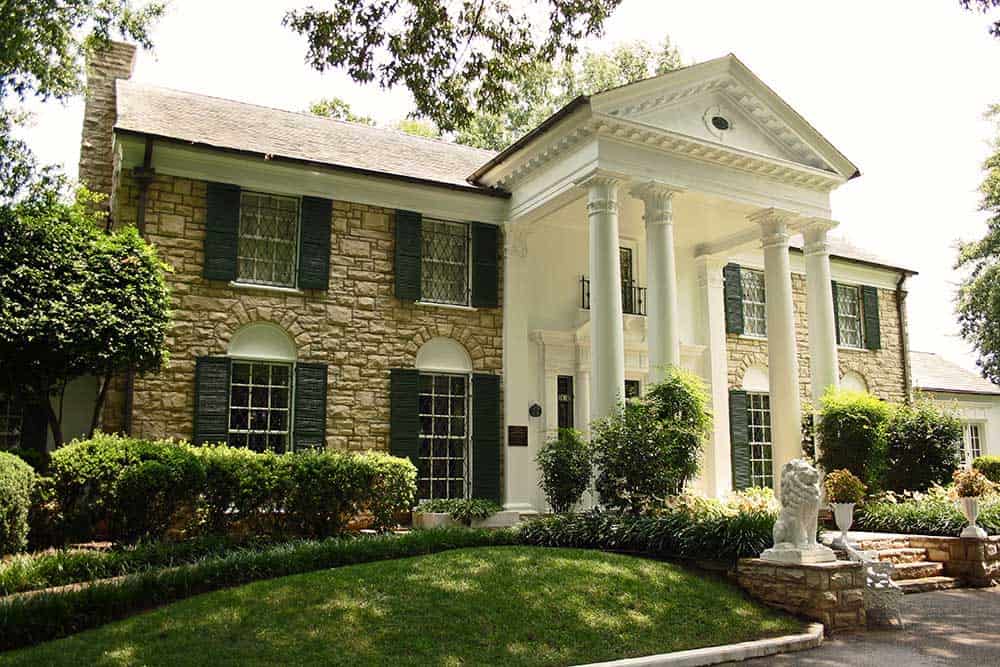 Since opening to the public, Graceland has become one of the best places to visit in Memphis. The museum is jam-packed with everything you ever wanted to know about Elvis’s life. 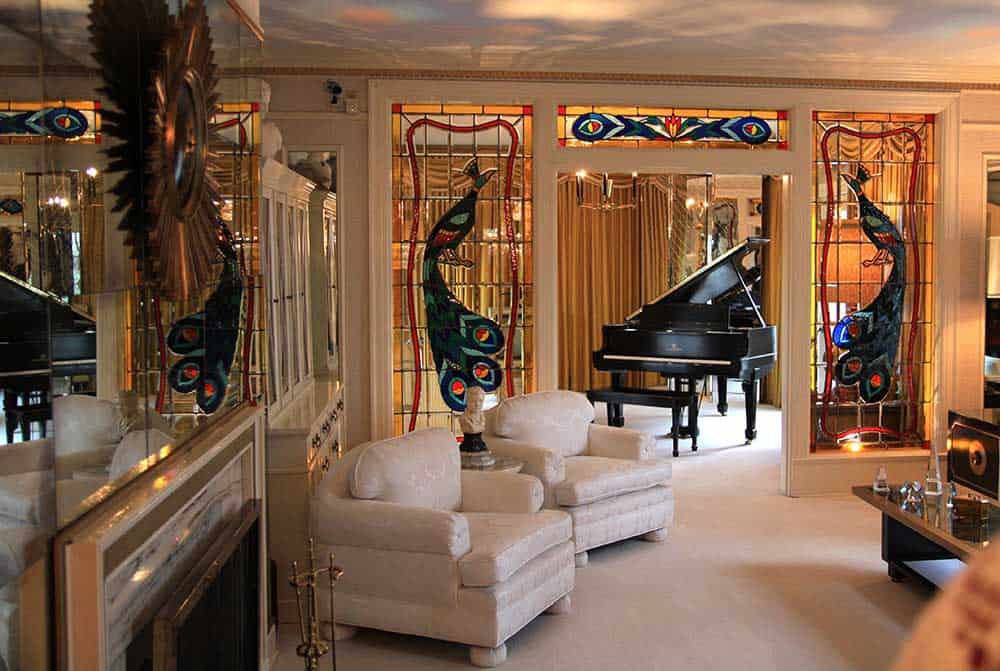 Even if you’re not a die-hard Elvis fan, Graceland is worth a visit. The home itself is a veritable time capsule of 1970s design & style. You’ll get a glimpse of the King’s outlandish style with gems like a green shag-carpet ceiling and yellow vinyl walls.

After a tour of the home, pop into Graceland’s extensive entertainment complex and visitor center. If nothing else, be sure to save time for a tour of Elvis’s two private jets here. They’ll fill in the details of the King’s lavish lifestyle that weren’t gleaned from the mansion itself.

Stand in the footsteps of American music greats at Sun Studio

From Graceland, it’s a 10-minute ride back into town to Sun Studio. Sitting just east of downtown, Sun Studio is one of the most famous historic recording studios in the USA. Even if you only have 24 hours in Memphis, the studio is a must-see. 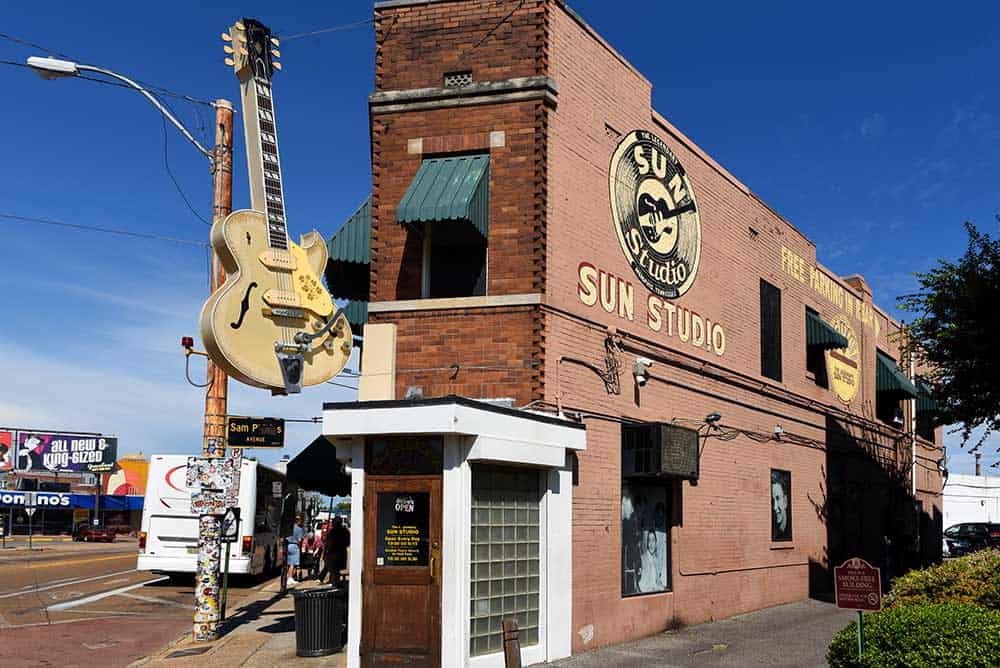 Sun Studio is often touted as the birthplace of rock ‘n’ roll. In its heyday, the studio saw music legends like Johnny Cash, Jerry Lee Lewis, B.B. King, and, of course, Elvis lay down famous tracks.

Tours of Sun Studio depart every hour between 10:30 am and 5:30 pm. During the 45-minute tour, you’ll check out the studio’s historic equipment. You’ll also get to listen to original recordings of the studio’s now-legendary tracks.

After you’ve delved into American music history at Sun Studio, it’s a short ride into Downtown Memphis. The rest of your tour of Memphis in one day will focus on hot spots in & around the downtown core. 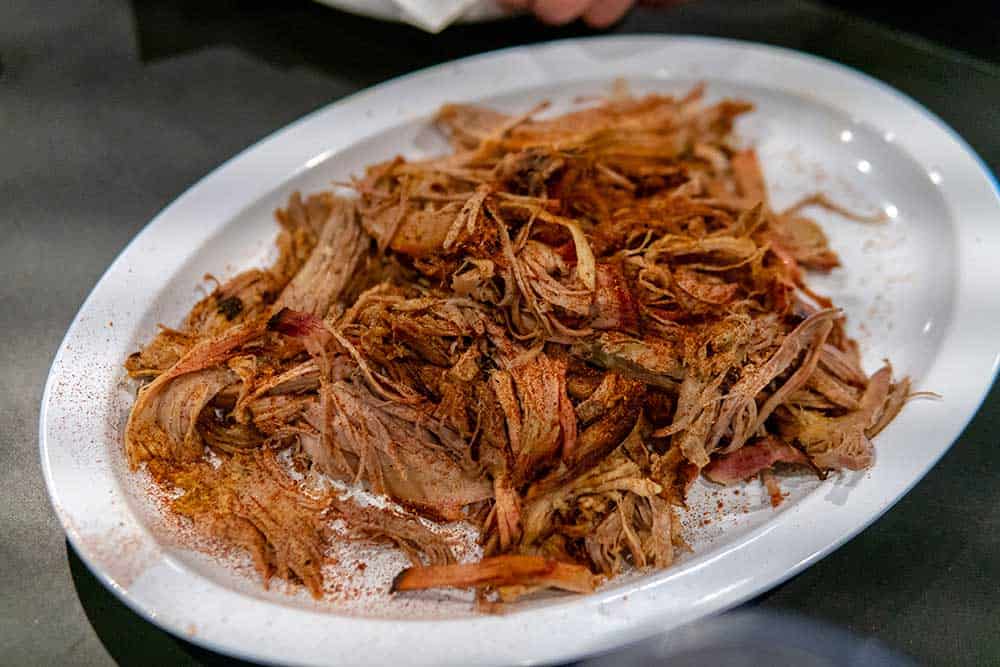 Before you embark on a museum-hopping adventure, fuel up with delicious grub at one of the city’s tastiest restaurants. For an old-school taste of the Mississippi Delta, grab lunch at Blues City Cafe. Or nibble on Southern soul food to great tunes at B.B. King’s Blues Club. The popular Gus’s World Famous Fried Chicken is another fantastic downtown restaurant. It’s an especially great choice if you’re on a tighter budget.

If you’ve got time on your trip, try to pop into the Peabody Memphis Hotel at 11 am. The Peabody is home to a brood of ducks who waddle over a red carpet into the hotel lobby for a dip in the fountain. Missed it? Return in the evening. The ducks do an encore fountain march at 5 pm.

A few blocks south of downtown in the South Main Arts District, you’ll stumble upon the National Civil Rights Museum. On any Memphis itinerary, visiting this wildly important museum is a must. 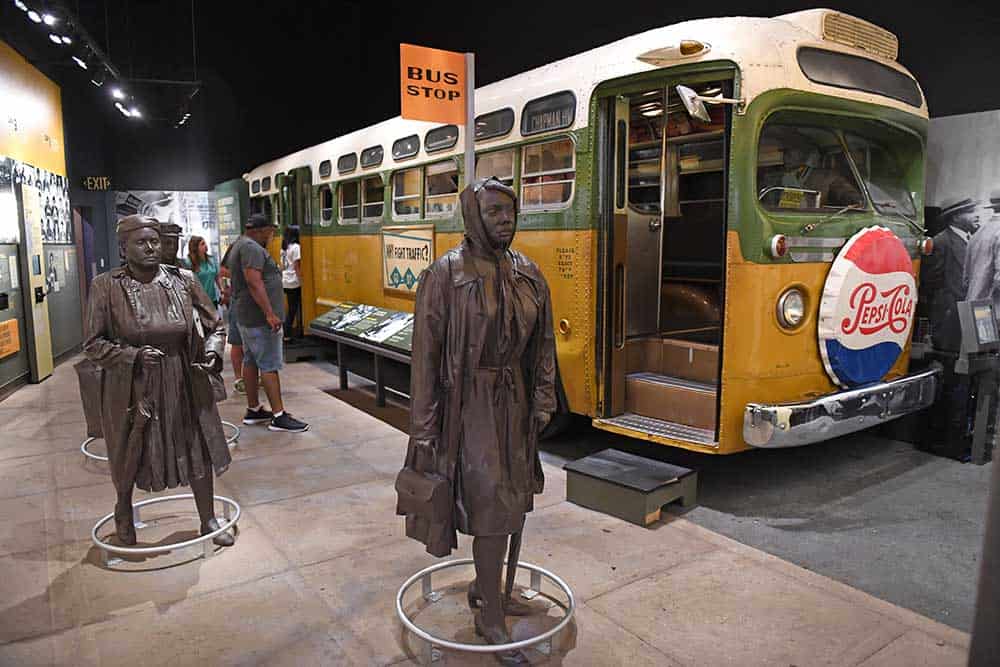 Inside the museum, a barrage of multimedia & interactive exhibits awaits. The exhibits detail the entire history of the American civil rights movement from the 17th century onward.

Be sure to take your time exploring the entire museum, relishing in all its details. It’s truly one of the most powerful museums in the USA.

You don’t have to be a huge music fan to love the Memphis Rock ‘n’ Soul Museum. The museum is located in the heart of the city center. It chronicles Memphis’s contribution to some of the world’s most popular music genres from the 1930s to the 1970s. 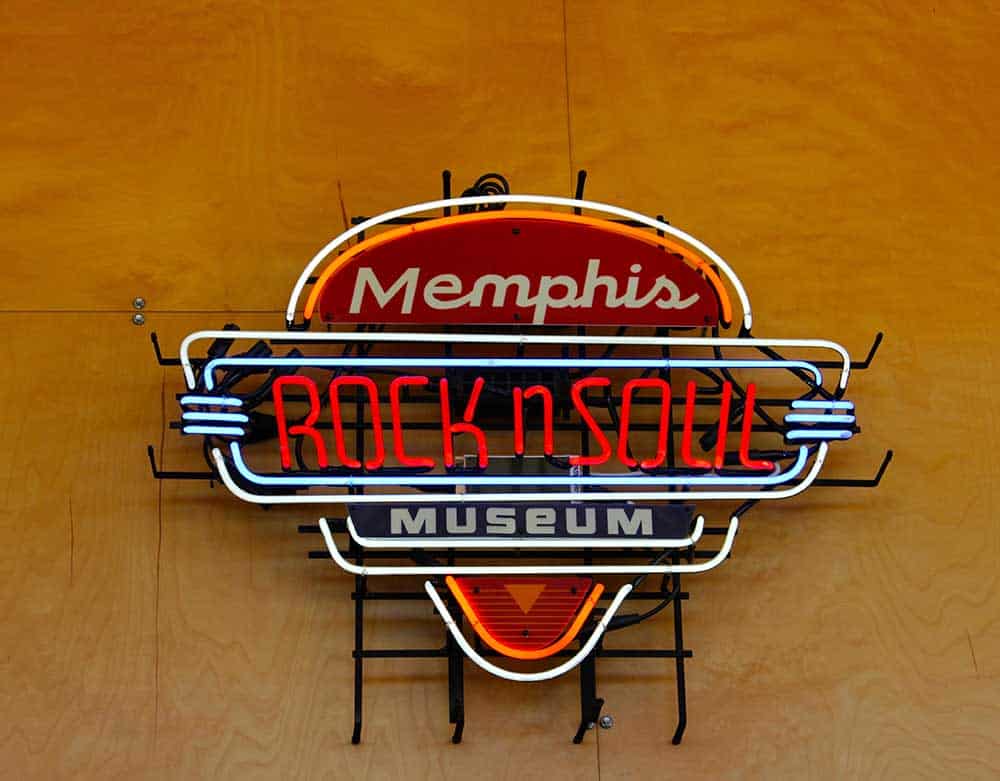 The Memphis Rock ‘n’ Soul Museum ties the city’s music story to its struggle for civil rights and socio-economic challenges. The perspective is unique among other American music museums.

Had your fill of museums? End your tour of Memphis in 24 hours on Beale Street. The iconic street in Downtown Memphis is one of the most famous entertainment districts in the United States. Beale Street is chock-loaded with blazing neon signs pointing to its popular restaurants, blues clubs, and live music venues. 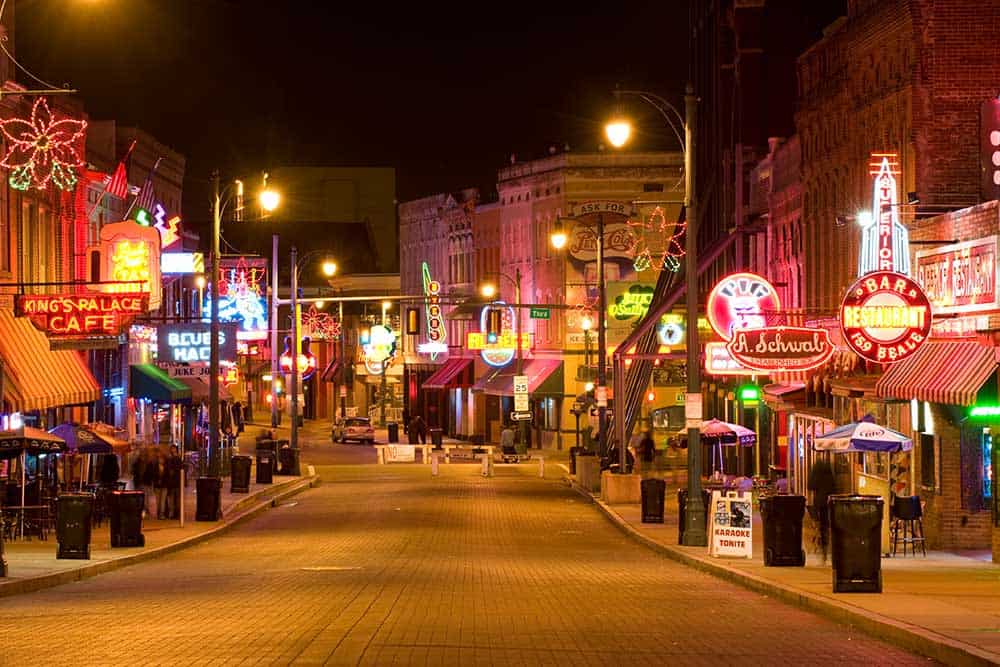 Aside from its nightlife, Beale Street is a fantastic place to eat. For upscale Southern, grab a bite at Itta Bena. The chic cabaret & cocktail lounge is located on the third floor of B.B. King’s Blues Club. Or relax with cold beers and pub fare in a heritage setting at Silky O’Sullivan’s. The blues-themed Rum Boogie Cafe is another popular joint for BBQ and live music.

Where to stay with 24 hours in Memphis

For a 1-day trip itinerary, the best area to stay in Memphis is Downtown. The city center is home to many of the city’s top tourist attractions and best hotels. Downtown is also the safest area in the city for travelers. 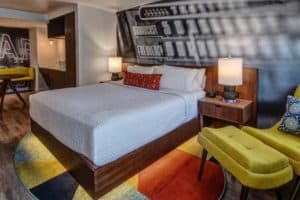 It doesn’t get much cooler than this blissful modern hotel. The hotel’s retro-inspired rooms are a music history lesson on their own, featuring unique artwork and designs. You’ll love the outdoor pool and shared lounge areas.

Enjoy Southern hospitality at one of the city’s most legendary hotels. The delivers both elegant rooms and a wealth of excellent amenities. Several on-site eating & drinking options await along with an indoor pool and spa. 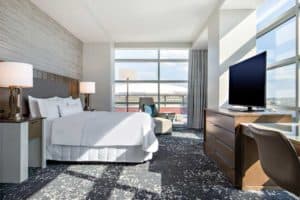 For a luxury stay in downtown, look no further than this delightful 4-star hotel. Besides the spacious modern rooms & excellent amenities, the location is perfect. The hotel sits just minutes from the city’s main entertainment district. 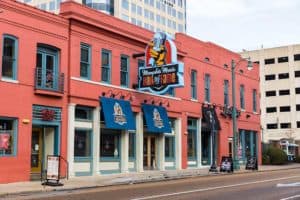 Die-hard music fans should carve out time on their trip to visit the Memphis Music Hall of Fame. Located in the heart of the city centre, the museum pays homage to music legends connected to the local music scene. Inductees include Aretha Franklin, Roy Orbison, Johnny Cash, Elvis Presley, and B.B. King. 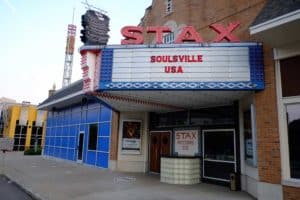 Located in the former Stax Records building, the Stax Museum of American Soul Music is one of the world’s only soul music museums. In its heyday, the famed record label signed soul artists like Isaac Hayes, Otis Redding, Albert King, and Booker T. & the MGs. The museum features over 2,000 pieces of memorabilia, including instruments, stage clothes, and photos.

When to visit Memphis

The best time to visit Memphis is from April to May and October to November. Visiting in spring or autumn offers both pleasant weather and respite from high season crowds. 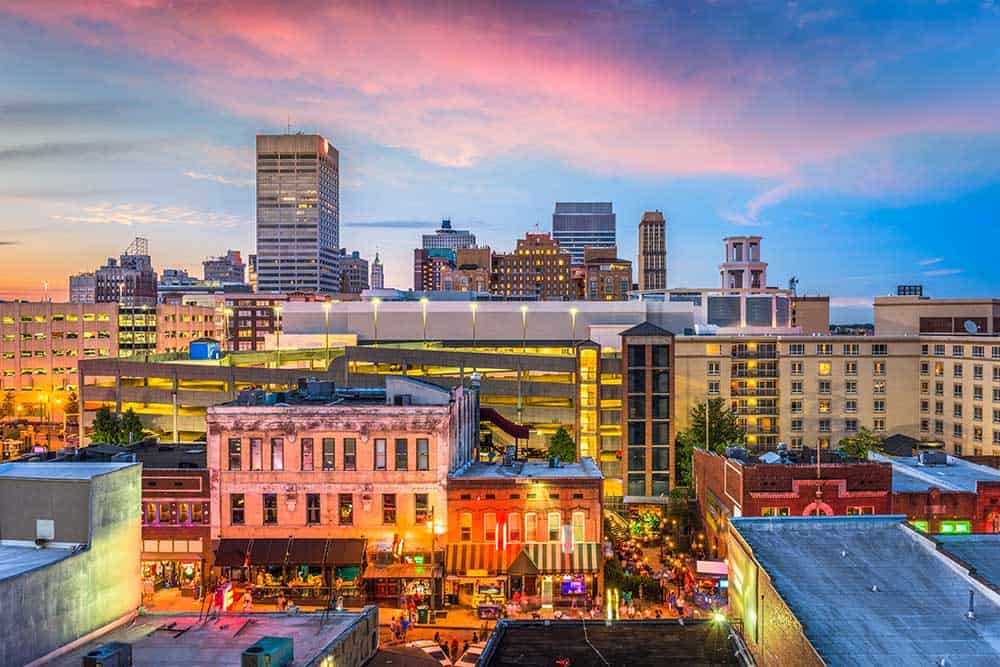 Although it’s the driest time of the year, summer isn’t one of the better times of the year to travel to Memphis. Temperatures are often blazing hot & humid to the point of discomfort. It’s also the busiest time of year for tourist crowds.

The winter months between December and March are also not ideal for visiting. Temperatures can get as low as -1ºC (30ºF) at times.

How to get to Memphis

Memphis is well-connected to other cities in the Southeast USA by road. Popular routes and estimated driving times include: