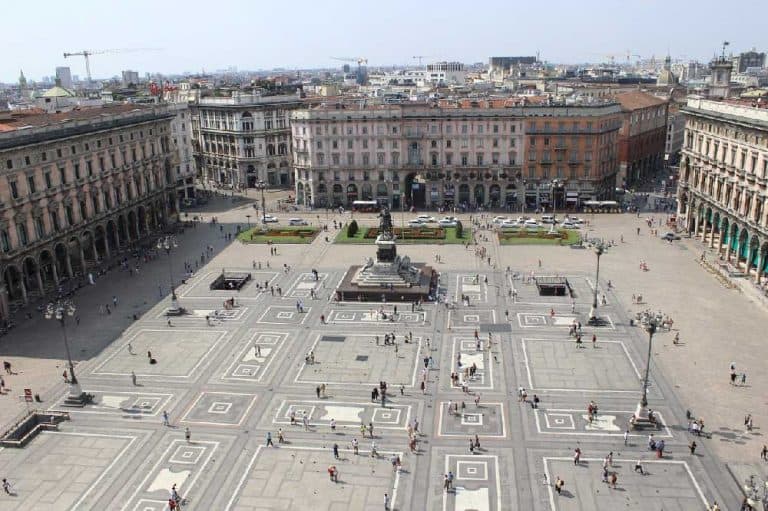 Although it’s known one of the world’s fashion hubs, there’s more to spending one day in Milan than just shopping for the latest styles. The dynamic Italian metropolis of Milan is as fast-paced as it is fashion-forward. And on any Milan itinerary, you’ll quickly discover the city’s cultural breadth.

For centuries, Milan was one of the main industrial and cultural centres of Italy. Even if you only have 24 hours in Milan, you can browse enviable art collections that celebrate both old masters and fresh faces between walking streets graced with lovely 18th- and 19th-century architecture.

Don’t know what to do in Milan in one day? Plan your trip with this complete 1-day Milan itinerary…

What to do in Milan in 24 hours: A complete one-day itinerary

As with most of our one-day city itineraries, we’ve filled this Milan itinerary with fun things to see and do. You’ll get to visit the famous historic sites, such as the largest Gothic cathedral in the world and a medieval fortress. You’ll also have the chance to taste local dishes and shop at a wide variety of stores. 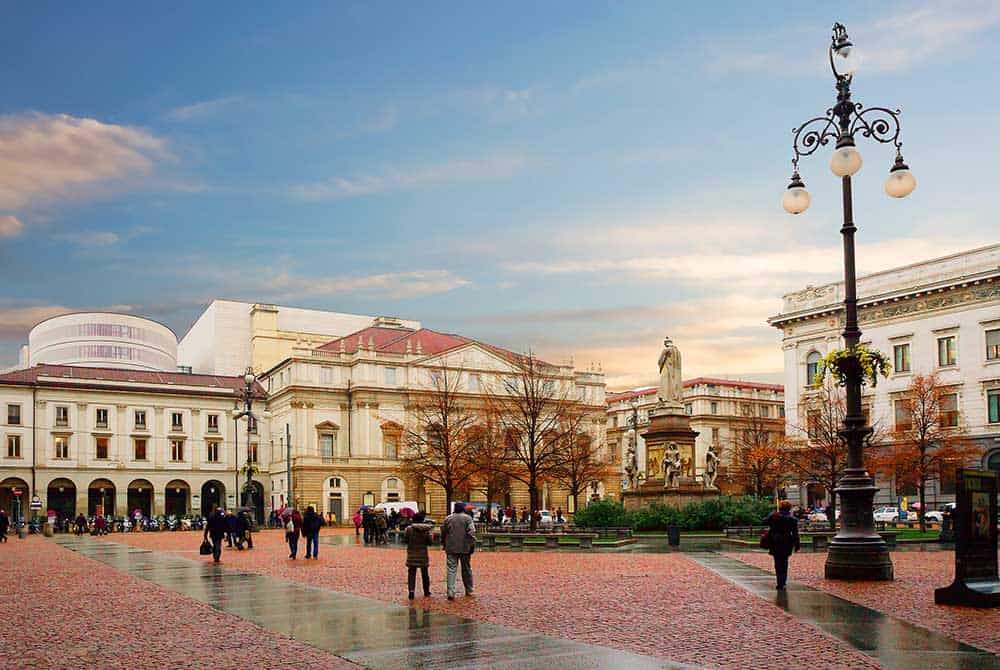 Due to the size of the city, 24 hours in Milan isn’t enough time to see it all. You’ll spend most of the day walking around the central area and venturing out into some of the surrounding districts.

View the city from the top of Duomo di Milano

If you only have 24 hours in Milan, start at Duomo di Milano (Milan Cathedral). The cathedral is the most recognisable landmark in the city, thanks to its terraces. The top of the cathedral features 135 spires with intricate carvings and architecture, along with over 2,000 different decorative statues. 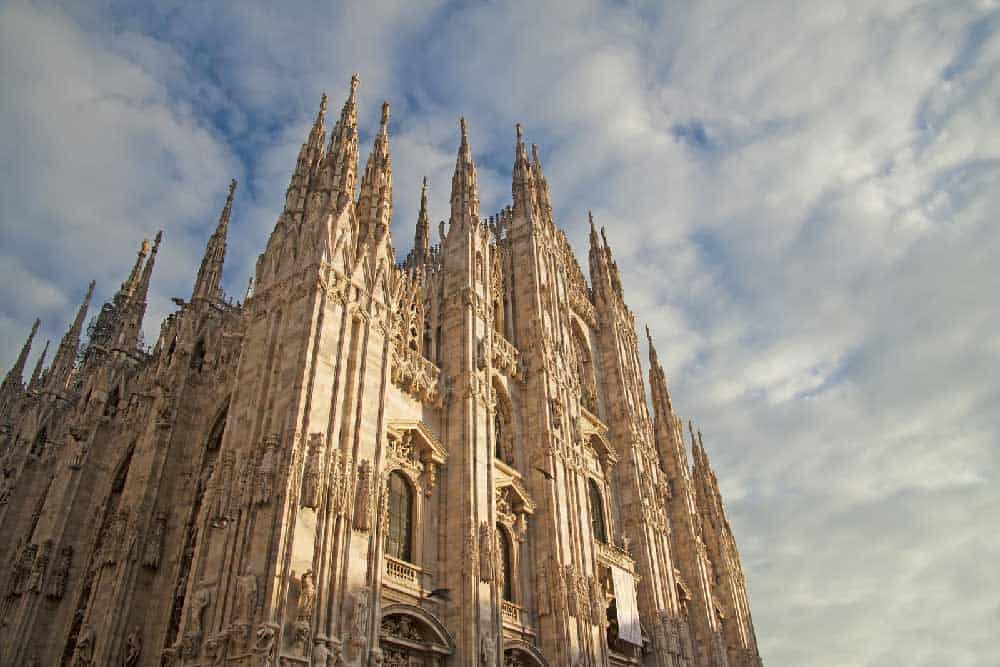 The rooftop is one of the more stunning sights, and the view from it is spectacular. Start your day at the cathedral to avoid the crowds and work your way to the top to see the city from above.

From the rooftop, you can see quite a bit of the downtown area and the mountains in the far distance. However, the real benefit of travelling to the top of the cathedral is to see the network of staircases connecting the various towers.

The cathedral opens at 9am, but with just one day in Milan you may want to arrive a little earlier and get your tickets in advance. Arrive even earlier to walk around the courtyard and snap a few photos of the towers before the doors open.

Some of the top things to do & see in Milan are a short walk from the cathedral, including a trip to Galleria Vittorio Emanuele II. It’s a popular shopping centre with a wide selection of shops. 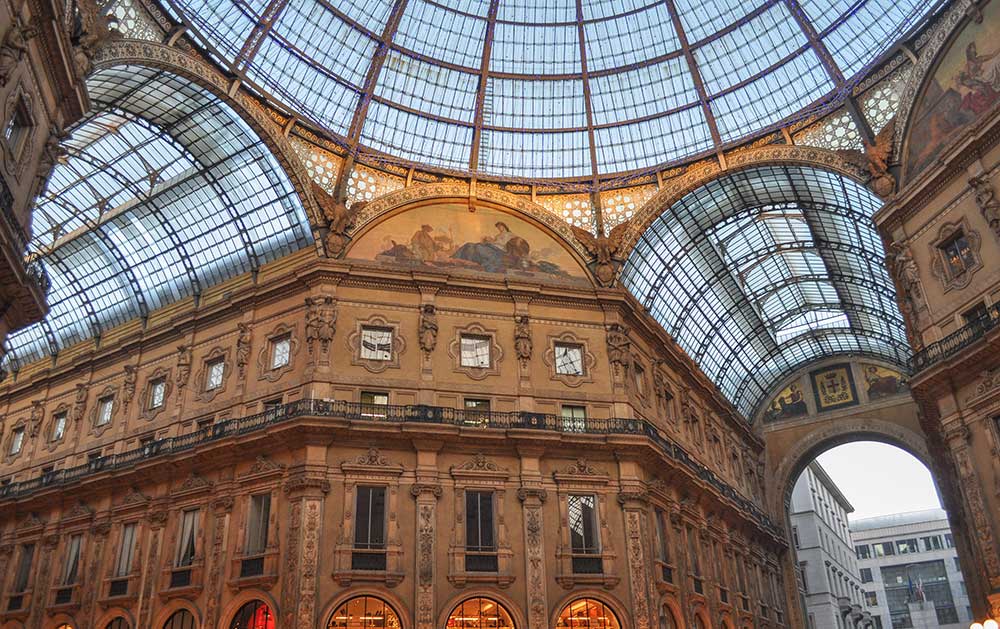 The Galleria is also the oldest active shopping mall in the country and considered one of the main landmarks. It’s housed inside a four-storey historic building that was built between 1865 and 1867. Most of the shops are modern, selling everything from clothes to electronics.

A lot of the shops in the complex are luxury retailers. You’ll find jewellery, antiques, and haute couture threads. However, a few of the shops are among the oldest in the city, including Biffi Pasticceria, a local pastry shop.

Of course, the building itself is part of the reason for visiting. The historic site features a massive central octagonal space with a glass dome overhead. By the time you arrive, the morning light should be spilling through the dome and lighting the main hall.

Everything in the shopping centre is expensive, from the goods to the food. It also becomes crowded by midday. Spend an hour or two browsing the shops and admiring the architecture before moving on.

After some indoor shopping, it’s time to visit the historic Merchants Square located just down the street from the Galleria.

On the way, stop at one of the cafes or bakeries for a quick bite. Granaio and Panini Durini are two popular options located across the street from the public square. You’ll find various baked goods to fuel the rest of your one day in Milan itinerary. 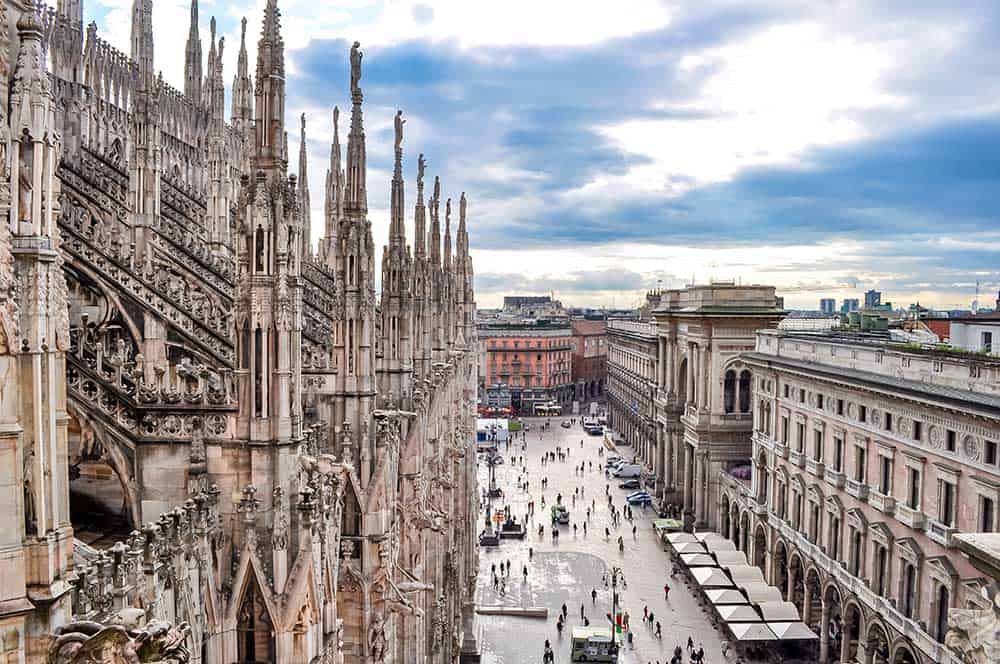 As you finish your food, start walking to Merchants Square. It’s a small public square found directly between the cathedral and Sforzesco Castle. Hundreds of years ago, this was the main public market space. You’d find the area full of vendors selling all types of foods and goods.

It’s no longer an active marketplace, but it’s an important historic site. Four medieval buildings surround the square, including one structure built in the 13th century. Located on the north-eastern side of the square, Broletto Nuovo was the original administrative headquarters of the city.

Unfortunately, the buildings aren’t open to the public, but you can walk around the square and check out the oldest architecture in the city.

Tour the Museums Located Inside and Around Sforzesco Castle

If you look northwest from Merchant Square, you may see parts of Sforzesco Castle in the distance. The historic site is just a few blocks from the square. 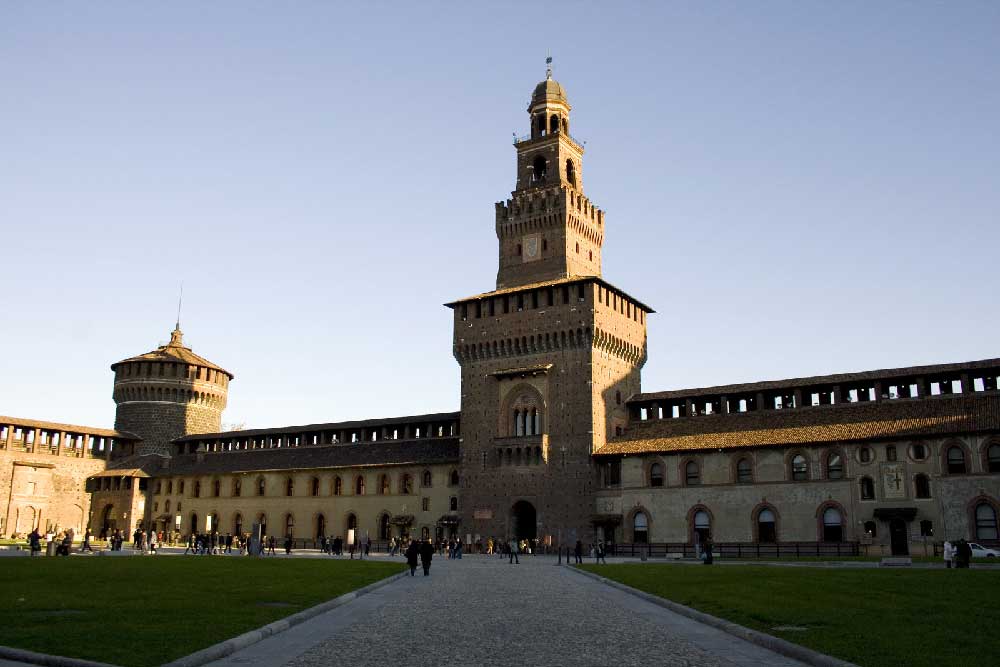 Built in the 15th century, the castle covers a large portion of central Milan. The castle complex is an interesting place to visit, mostly thanks to the various museums found in and around the grounds.

You could visit the Museum of Musical Instruments to see over 700 early examples of guitars, harps, and other old instruments. Nearby is the Antique Furniture & Wooden Sculpture Museum and the Egyptian Museum. However, the most popular spot is the Museum of Ancient Art.

The Museum of Ancient Art holds a large collection of late antiquity sculptures and paintings from the medieval period. You’ll also see hundreds of swords, firearms, armour, frescoes, and tapestries.

Located behind the castle is the massive Sempione Park. It’s a massive public park with gardens, a tower, a theatre, and an aquarium.

Unfortunately, touring Milan in 24 hours doesn’t give you enough time to see everything. For your one-day itinerary, you’ll need to skip the park and start walking to your next stop.

After walking around the castle, it’s time for a trip through Brera and the Museo Poldi Pezzoli. While Brera is in the city centre, it has its own atmosphere. It was once the hipster part of the city. It’s now more upscale and has a wide assortment of high-end shops and smaller boutique stores. 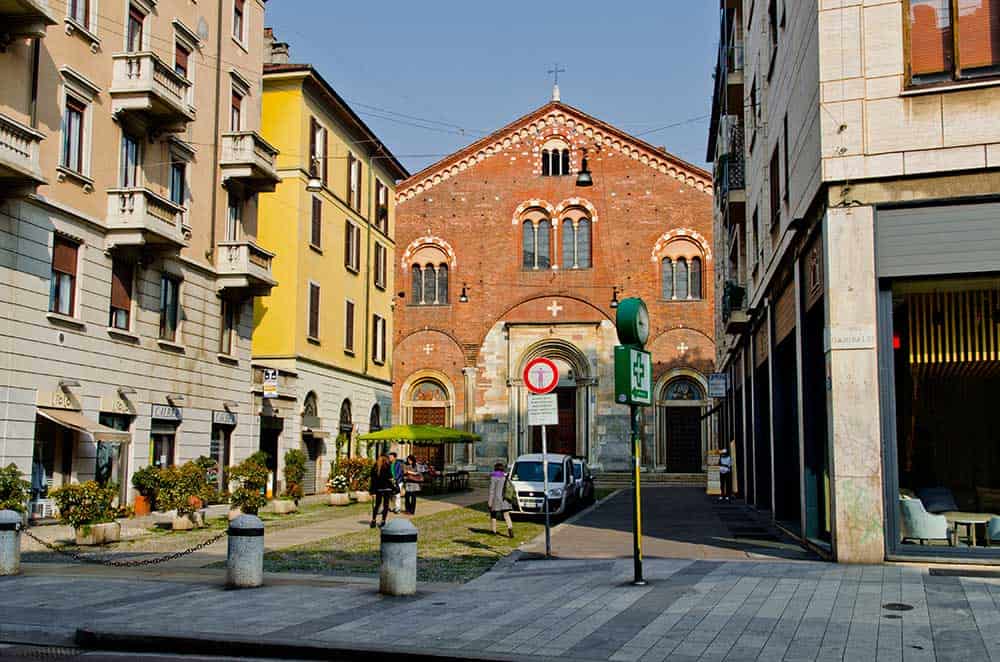 The main reason to pass through this part of the city is to reach the museum. Museo Poldi Pezzoli holds priceless works of art from famous European masters, including notable Italian painters.

Along with famous paintings, the museum has a large collection of jewellery, ceramics, weaponry, and glassworks. If you want to know more about the pieces, consider taking the guided tour. The tour takes about two hours, taking you through each of the collections inside the small museum.

The only drawback is the crowd. By the time that you reach the museum, it should be packed with tourists. You may even want to purchase tickets in advance to cut down on the time in line. 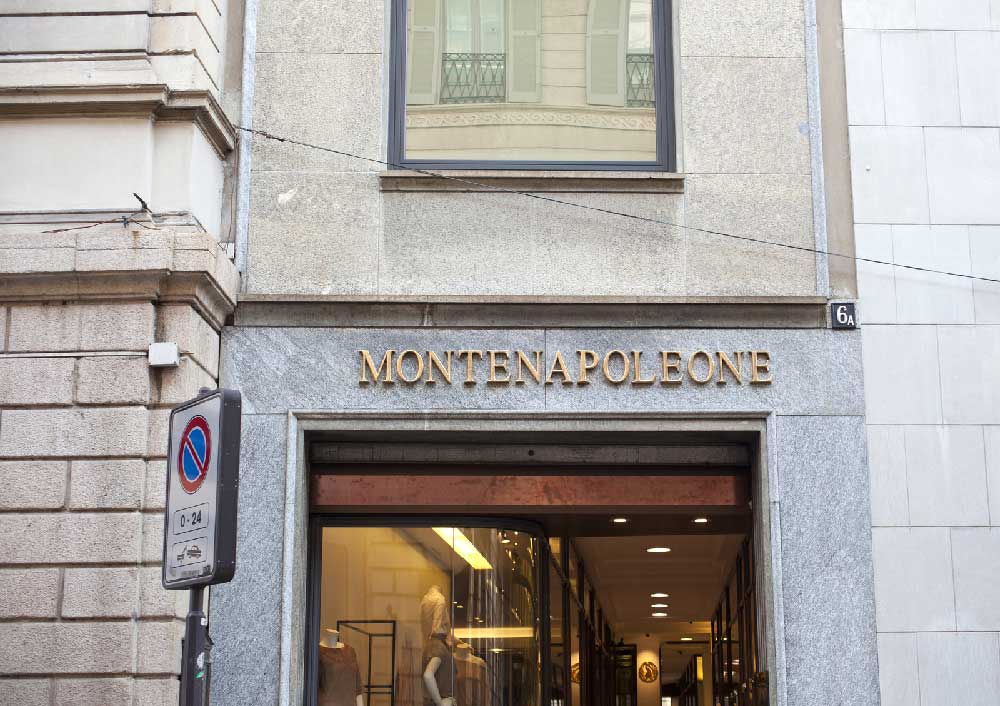 As you walk this street, you’ll discover designer clothes from leading designers. Almost every major designer maintains a boutique shop somewhere along this street.

Unfortunately, some of the fashions come with price tags in the thousands. It’s still a fun experience, walking past the high-end shops and people watching as you go.

Along with ready-to-wear fashion, this street is known for its shoes. Some of the most respected Italian shoemakers have boutiques on Via Monte Napoleone.

Unfortunately, the street doesn’t have a lot of options for food. Nearly every store window contains clothing, jewellery, or shoes.

Grab drinks near the canals at Naviglio Pavese

When you tire of browsing the expensive clothes on Via Monte Napoleone, walk to the nearest metro station to grab a ride to nearby Navigli and the Naviglio Pavese canal.

When you’re trying to see all of Milan in one day, it’s easy to skip over the districts surrounding the city centre. Navigli is where you’ll find the city’s nightlife scene, providing the perfect spot to end your trip. 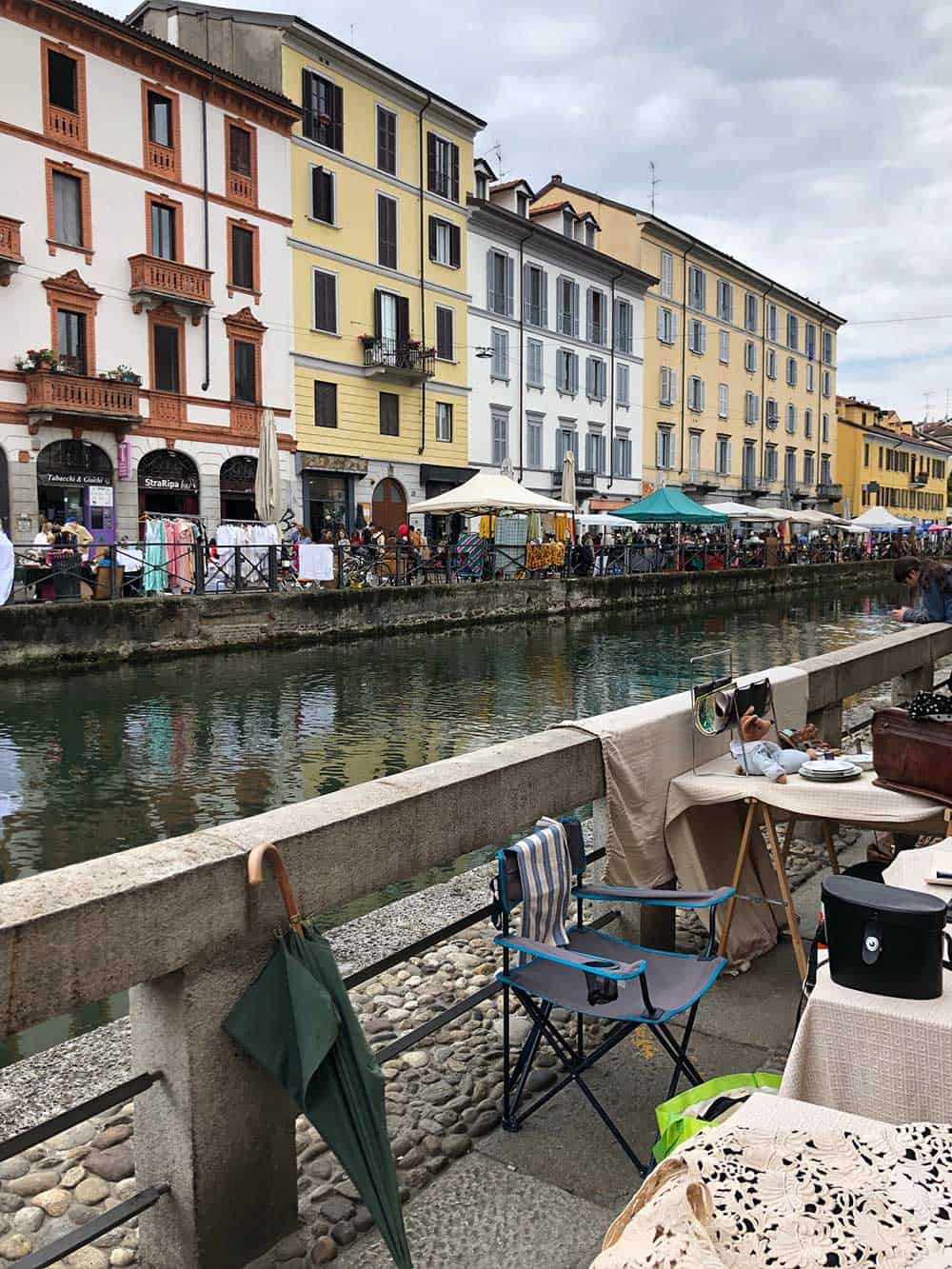 Navigli contains several canals that cut through the neighbourhood and connect Milan to Pavia. In some of the older quarters, you’ll find footbridges and streets that face the canal, resembling a smaller version of Venice.

Naviglio Pavese is one of the more popular canals, located just south of the city centre. Depending on the time of the year, you may come across summer concerts or flea markets as you walk the streets.

As you stroll the canal, look for a restaurant, bar, or club that doesn’t look too crowded. Many of the establishments have outdoor seating near the edge of the canal, allowing you to sit and watch the boats go by as you enjoy drinks or a late meal.

Where to stay: The best hotels for 24 hours in Milan

As the second-largest city in Italy, choosing where to stay in Milan isn’t always easy. For most travellers with a quick layover in Milan, the areas in & around the city centre offer the best selection of accommodations close to many of the top attractions. Here are a few ideas to start your search…