For first-time visitors to Canada, spending one day in Montreal is one of the best introductions to the country. Located in the Canadian province of Quebec, Montreal is one of the most-visited travel destinations in Canada. Embarking on a Montreal itinerary will reveal a city that’s often known as the cultural capital of Canada.

As you walk the cobblestone streets during your first 24 hours in Montreal, you’ll pass by French colonial buildings and entire neighbourhoods where you won’t hear a single English utterance. A layover in Montreal feels like old Europe with a contemporary twist.

Need help planning where to go in Montreal in one day? Get started with this complete 1-day Montreal itinerary…

Where to go in Montreal in 24 hours: A complete 1-day itinerary

As with most of our city travel plans, your first 24 hours in Montreal includes stops at the most significant cultural sites, attractions, and shopping and dining destinations in Montreal.

To begin your Montreal itinerary, you’ll start west of the city centre before working your way through the downtown area near St. Lawrence River.

You’ll visit museums, historic sites, and botanical gardens. You’ll also have the chance to taste the local flavours of Montreal and shop at busy public markets.

With your time mostly spent on foot in the centre, you (obviously) won’t see everything in Montreal in 24 hours. Consider coming back for a longer trip itinerary to truly immerse yourself in the Quebecois culture.

To start your one day in Montreal, you’ll likely want something to eat. Jean-Talon Market (Marché Jean Talon) is a large open-air market with an abundance of food options.

If you arrive in Montreal via bus, you’ll start at the main bus terminal near La Fontaine Park. If you arrive via plane, you’ll reach Montreal from the west. No matter how you arrive, travel directly to Jean Talon Market. 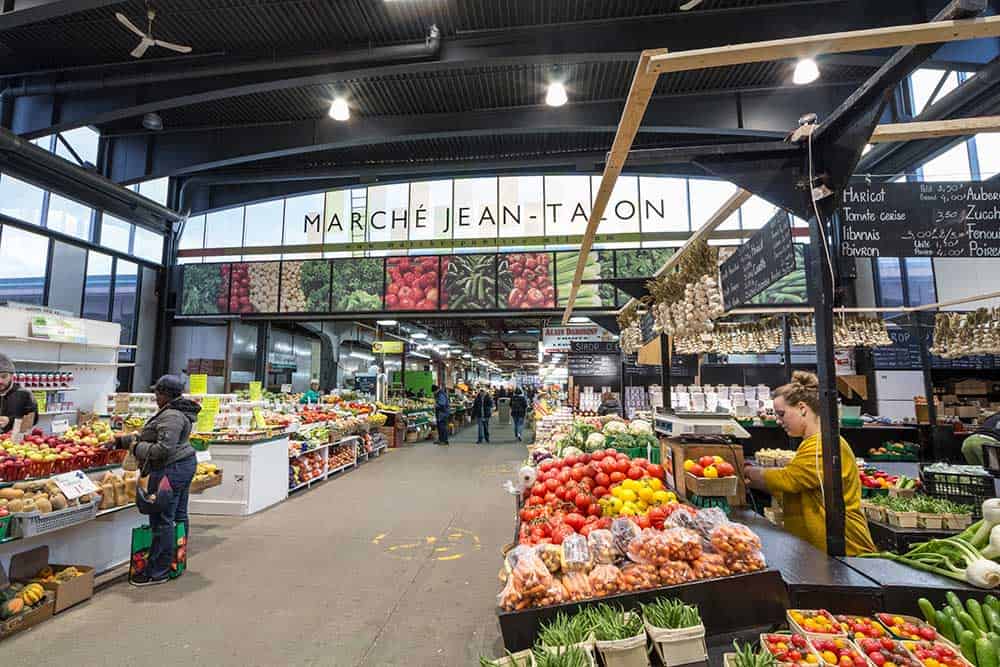 The market opens at 7 am, making visiting one of the first things to do in Montreal while you wait for everything else to open. The market includes indoor and outdoor space with about 300 vendors during the peak season between May and October.

Marché Jean-Talon also has a few shops with 20 specialty boutiques located in an underground parking area.

Above ground, it’s mostly whole foods such as meat and produce.

You’ll also come across vendors with prepared meals and street style delicacies. Find something tasty to start your day as you soak up the smells and sounds of the bustling marketplace.

With food in your belly from the market, continue your 1-day Montreal itinerary by checking out the plants and insects of the Montreal Botanical Garden. You’ll need to take a taxi or walk as the bus line doesn’t provide a convenient route.

It’ll take a little over an hour on foot or 20 minutes via taxi to the Montreal Botanical Garden.

The path takes you through several residential neighbourhoods with charming little homes. The garden is located on the other side of one of these neighbourhoods, next to Montreal Olympic Park. 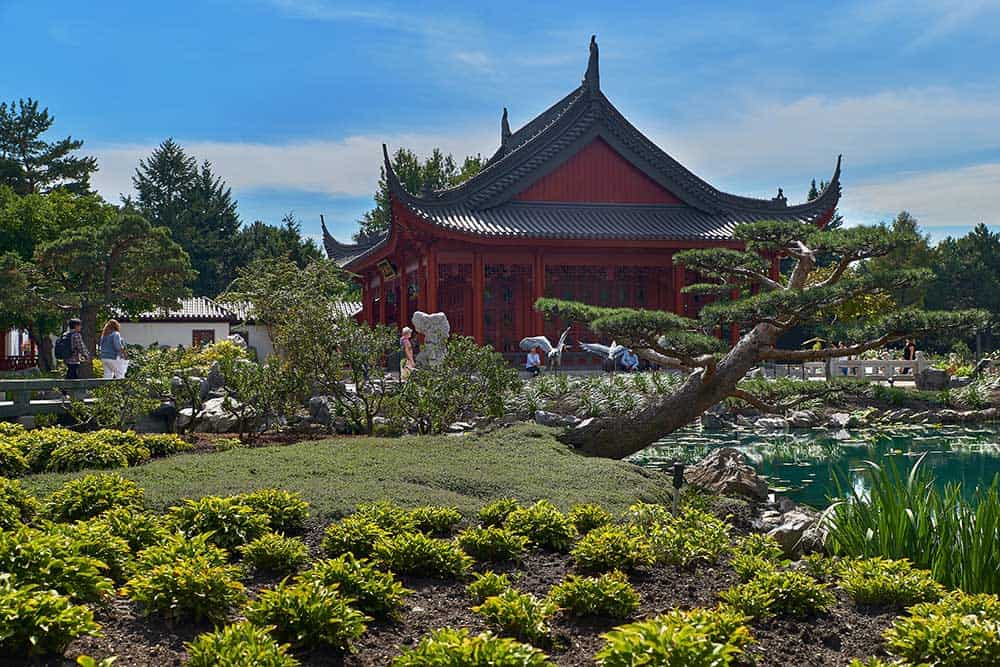 After looking at the plants, you can either examine insects at the Montreal Insectarium or explore different ecosystems inside the Biodome.

You won’t have time for both unless you skip one or two of the stops on this 24-hour Montreal itinerary.

Note that the insectarium is behind the botanical garden but it’s going through renovations. It’s expected to reopen in 2020 or 2021.

The Biodome is just a short walk from the garden and insectarium. As with the insectarium, it’s gone through renovations and reopened in December 2019.

If you miss out on both attractions, you could check out the Montreal Olympic Park site. It’s mostly used for local festivals and events. On Fridays, you’ll catch live music and food trucks.

Shop local boutiques at the Old Port of Montreal

After spending your morning around the outskirts of the downtown area, it’s time to explore the heart of Montreal. Walk east to the riverfront and then travel south until you reach the Old Port of Montreal.

The Old Port of Montreal covers about two kilometres along the shore of the St. Lawrence River. It’s no longer a major port for trading but includes a few historic sites and lots of commercial developments. 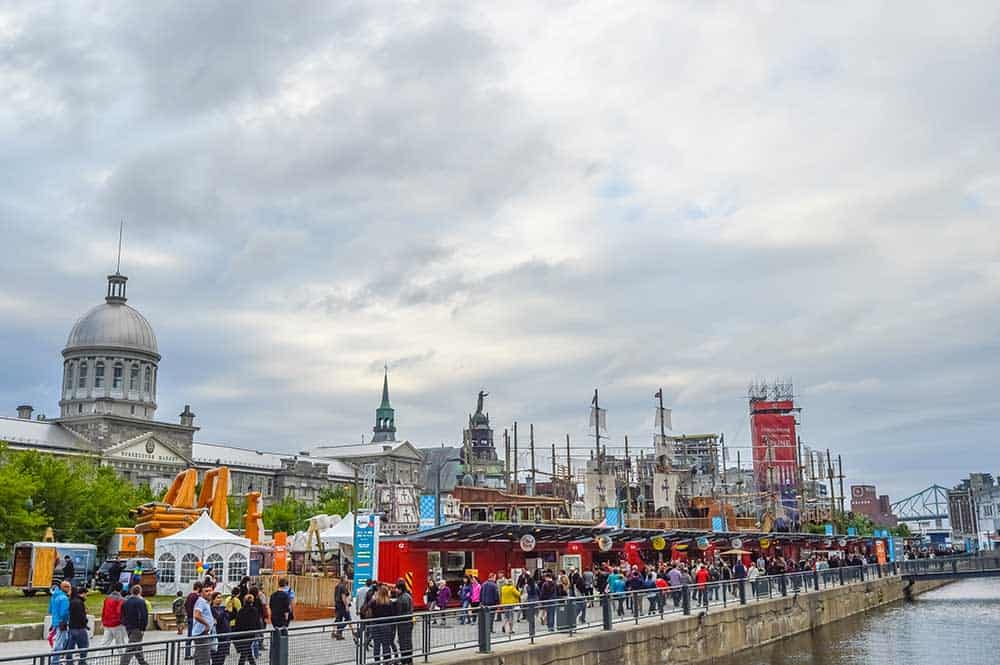 The area surrounding Old Port has dozens of small shops and cafes. It’s a kitschy area with lots of gift shops and souvenirs but you’ll also find impressive antique stores and boutiques.

With just one day in Montreal, you won’t have time to fully explore the port.

It has a wide variety of activities including an IMAX theatre and the incredibly tall Montreal Clock Tower. It’s also home to the Montreal Science Centre, a fun spot for kids and families.

Instead of visiting those attractions, spend an hour or so shopping as you stroll through the old port area.

Step inside the intricately constructed Notre-Dame Basilica of Montreal

As you walk through the port area, you’ll probably catch a glimpse of the basilica in the distance. Notre-Dame Basilica of Montreal is right behind the old port.

The exterior of Notre-Dame Basilica stands out with its symmetrical Gothic Revival-style architecture, but you need to step inside to truly appreciate the basilica. 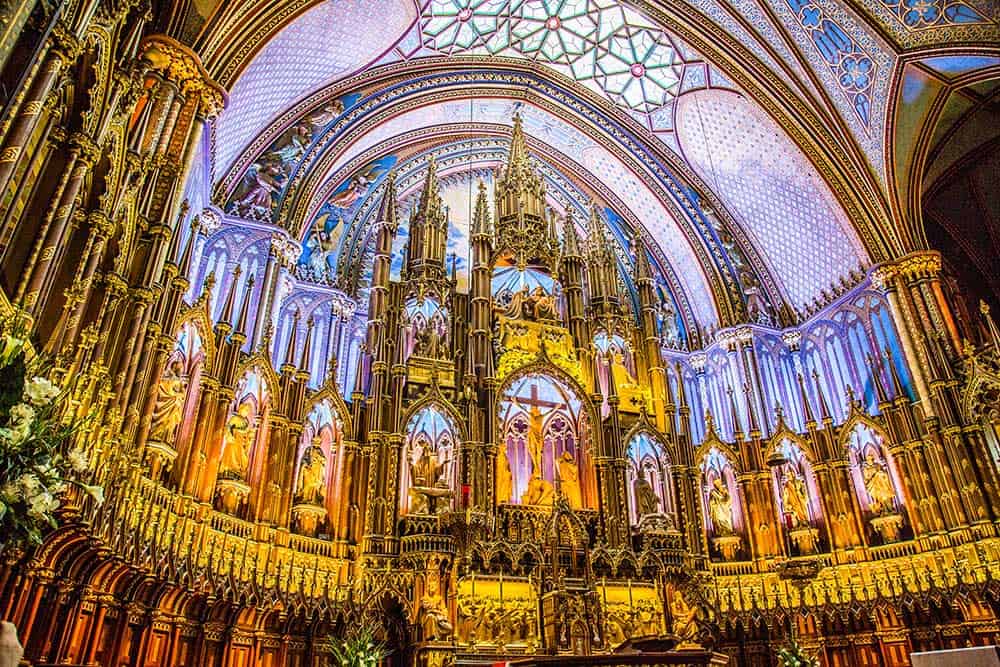 The interior is incredibly detailed, featuring a wide range of colours and hundreds of intricate carvings.

The main hall of Notre-Dame Basilica is massive with a domed stained-glass ceiling and dozens of large statues of religious figures.

The best way to experience the basilica is with an English tour. You’ll get to see the light show featuring live organ music and a dazzling display of lights across the stained-glass windows.

Travel the barren tunnels of the Underground City

The Underground City is just down the street from the basilica. It’s one of the more interesting destinations to include on your Montreal itinerary. The site isn’t fully developed with lots of empty spaces and hallways.

The subterranean walkway includes a network of tunnels that links various shopping malls and buildings in the downtown area. 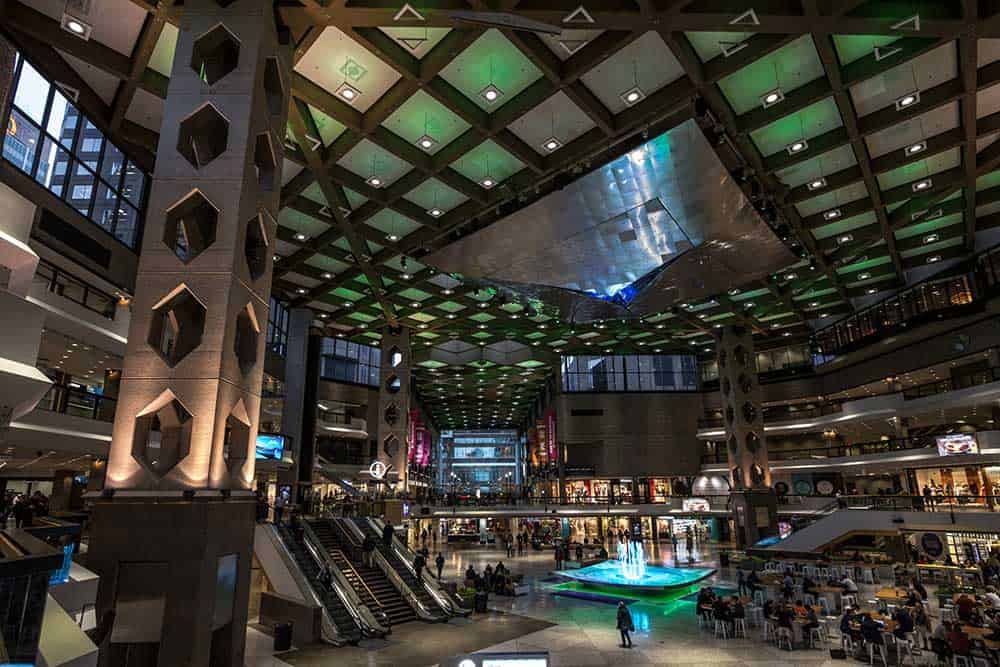 The main entrance is a short walk from the basilica, next to Victoria Square. You’ll also find 120 other access points throughout the city.

While large portions of the underground network remain undeveloped, the Underground City contains an assortment of shops, cafes, and restaurants. It covers over four million square metres and stretches for over 32 kilometres.

The central segment is the most populated.

It contains access to Place Ville-Marie, Central Station, several hotels, and the Complexe Desjardins shopping mal. Explore this central area and find something to eat or buy a few more souvenirs.

View the city from the observatory at Place Ville-Marie

After spending time below the earth, you’ll continue your one day in Montreal by travelling 46 storeys into the sky to get a better view of the city.

The Underground City connects to Place Ville-Marie where you’ll find the observatory with panoramic city views. 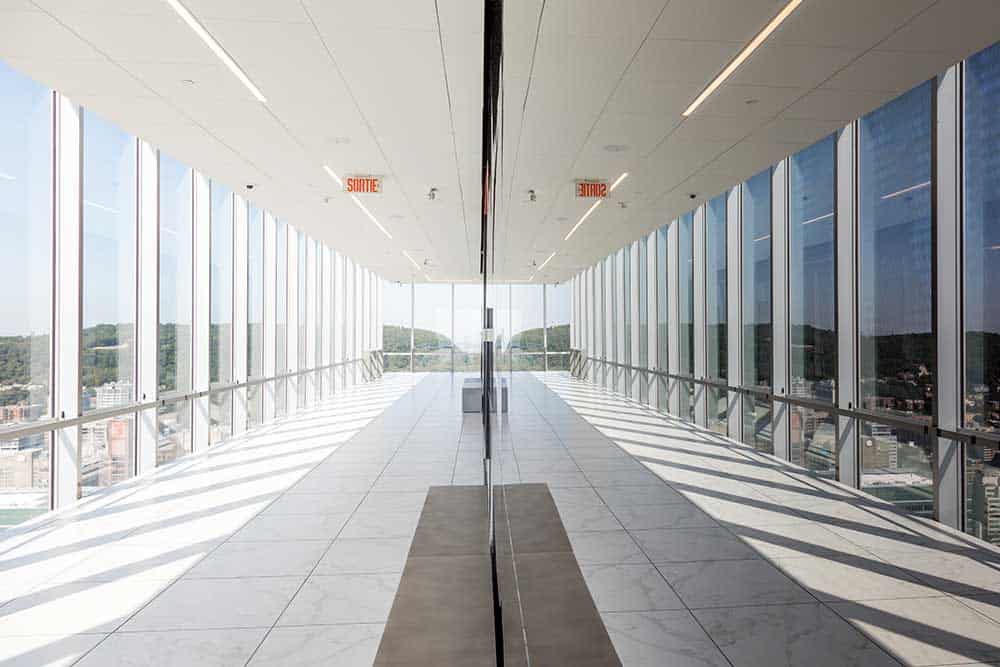 Place Ville-Marie (PVM) is a shopping and office complex. You’ll need to take an elevator to the top but the ride doesn’t take long.

When you reach the observation deck, you’re greeted with 360-degree views of Montreal. You can walk around all sides of the building and point out the landmarks that you’ve visited throughout the day.

The entrance fee for the observatory is a bit expensive but it’s included with the Montreal Tour Passport.

When you reach the ground level, step outside and head toward the Montreal Museum of Fine Arts. Your trip through Montreal in one day isn’t complete without a few cultural stops. The Museum of Fine Arts is one of the most prominent museums in Canada.

The permanent collection in the museum includes over 44,000 works. You’ll find thousands of paintings on display, mostly from European artists. It also contains various decorative arts and historic artifacts if you’re into history or archeology. 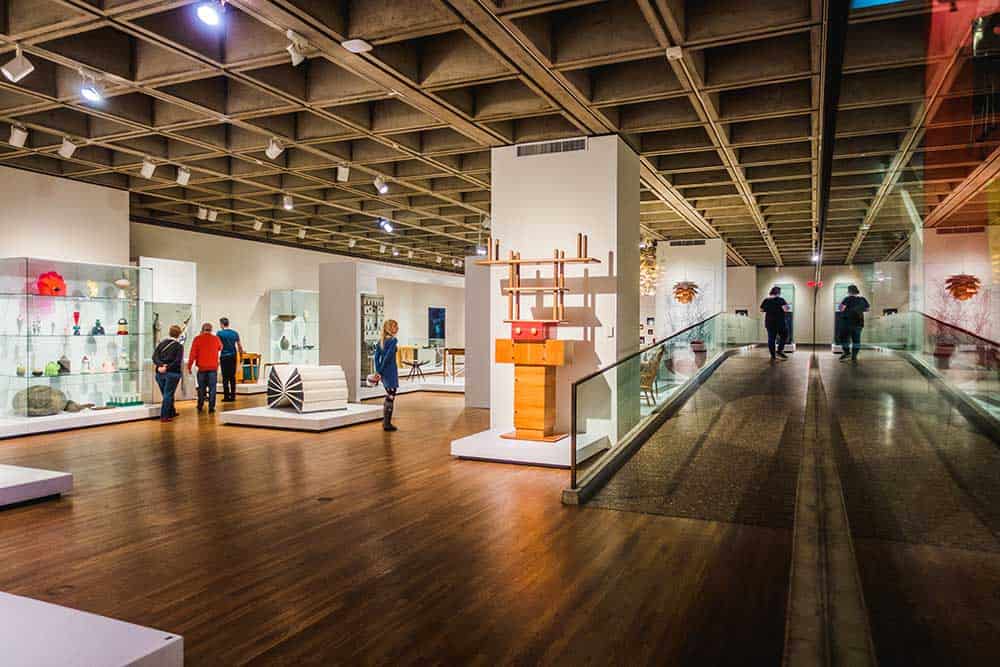 The only drawback is the size of the crowd.

The Montreal Museum of Fine Arts is one of the most popular museums in Canada, receiving millions of visitors each year. Depending on the season, you may find yourself standing shoulder to shoulder with other tourists as you browse the galleries.

Grab drinks near the river or explore the Quartier des Spectacles

Depending on your preferences, you have a couple of different options for ending your tour of Montreal in 24 hours.

If you’re looking for a relaxing end to the day, travel down to the river for fine dining and wine.

For those looking for excitement and entertainment, travel north to the former red-light district of Montreal, now known as the Quartier des Spectacles. 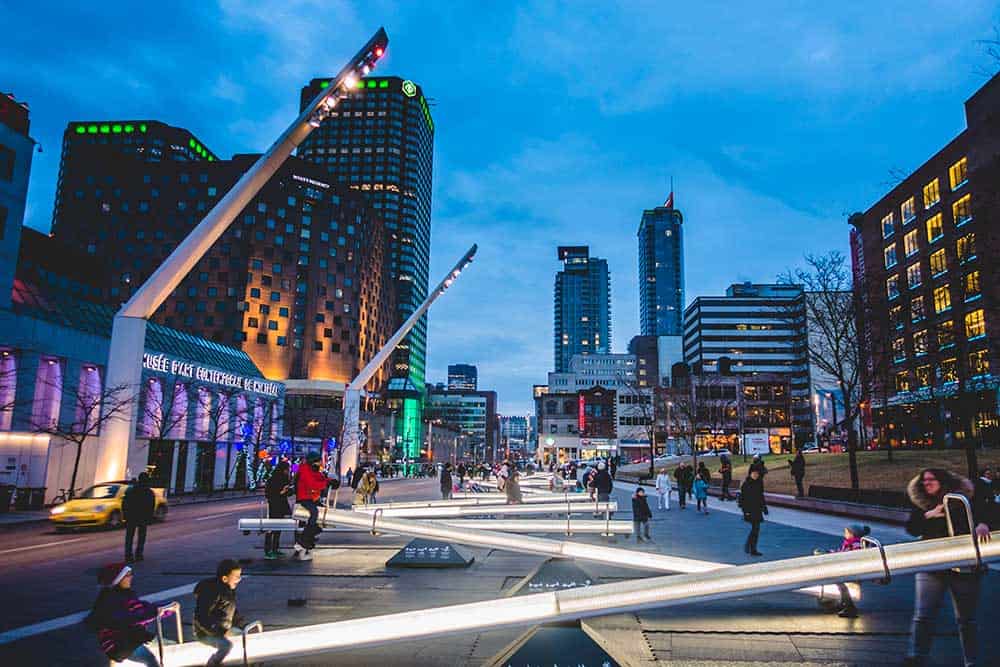 Historically, the district had numerous cabarets and strip clubs. As with other former red-light districts throughout the world, the city has cleaned up the area in the past couple of decades.

As part of an urban renewal project, some of the strip clubs were moved out of the area. It’s a little more family-friendly with less prostitution and gambling compared to the past.

The Quartier des Spectacles is still the centre of the nightlife scene in Montreal and a fun place to explore in the evening.

Where to stay: The best hotels for 24 hours in Montreal

Although it’s Canada’s second-biggest city, choosing where to stay in Montreal is relatively simple.

For most travellers with a quick layover in Montreal, the city centre (including Old Montreal) is the best place to start looking for accommodations as it’ll put you in close proximity to most of the stops on this itinerary. Here are few ideas…

Beyond Montreal in one day: More Canada itineraries