If you have one day in Naples, it helps to have a plan. You could easily spend several days exploring the winding streets and small shops without seeing it all. Art, history, and shopping are a few of the highlights.

When searching for the best places to visit in Italy, people tend to overlook Naples. It’s a forgotten gem with ancient landmarks and modern attractions. It boasts having one of the most beautiful bays in the country. It’s also a city of rich cultural treasures with two royal palaces, three castles, various ruins, and some of Christianity’s oldest frescos.

Don’t know where to begin? Start planning your trip with this complete 1-day Naples itinerary.

What to do in Naples in 24 hours: A complete one-day itinerary

As with most of our one-day city itineraries, this Naples itinerary takes you through the downtown area, but you’ll start on the outskirts of the city.

It’s a large city, making it a challenge to spend the entire day on foot. You’ll need to rely on public transport for a few legs of the journey.

Begin your day with a trip to the archaeological museum before working your way through the historic centre of the city. This gives you a chance to shop and explore the city’s top historic sites.

You’ll end up in the Port of Naples, home to the city’s top dining. Let’s take a closer look at this trip.

Tour the ancient statues inside the Naples National Archaeological Museum

As soon as you arrive in Naples or walk out of the doors of your hotel room, travel to Naples National Archaeological Museum. It’s located north of the historic centre and opens at 9 am. 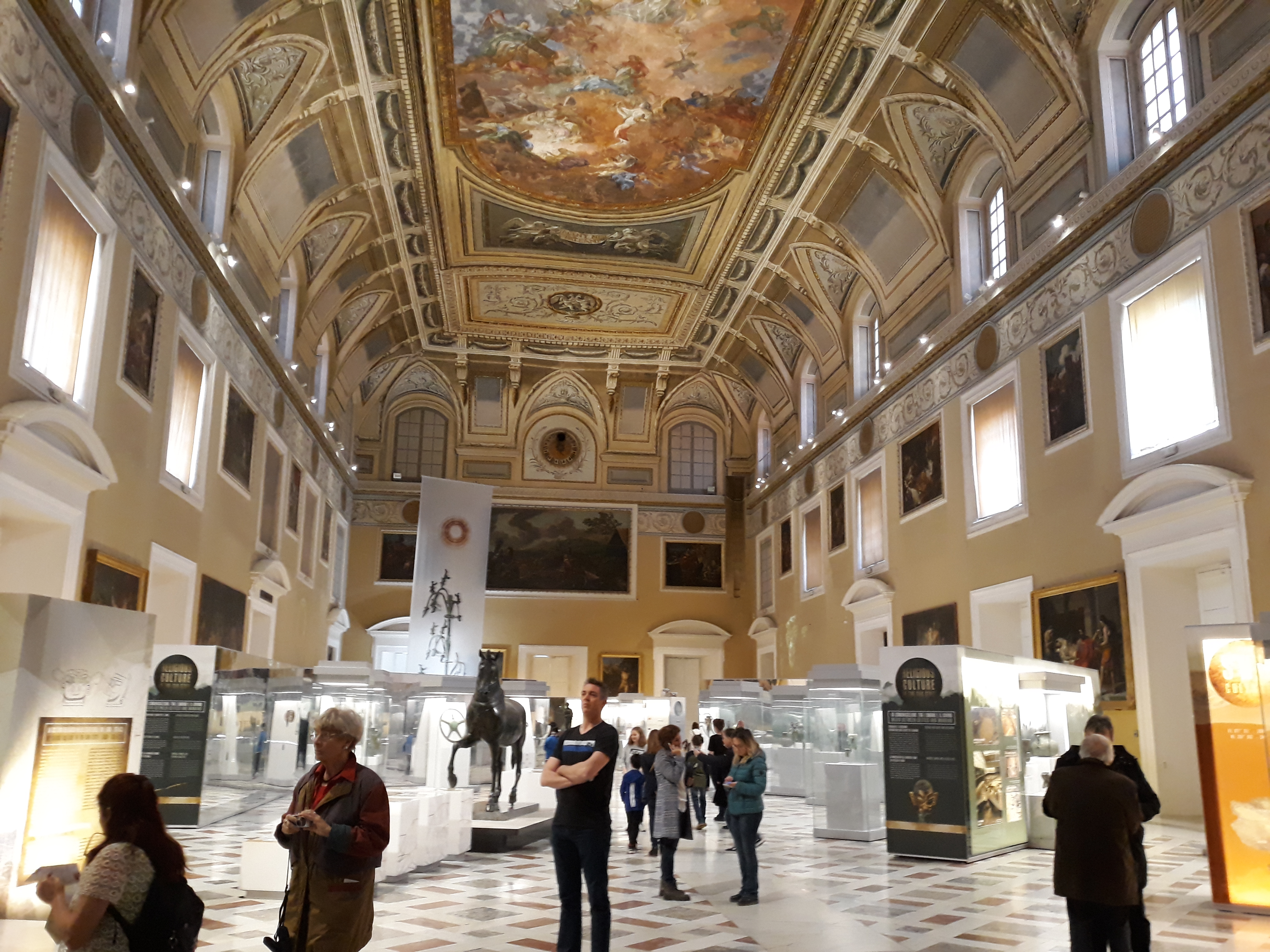 On your way to the museum, you’ll need something to fuel your Italy itinerary. Stop at one of the many cafes or bakeries that you pass for a shot of espresso and a pastry.

The local delicacy is the sfogliatella. It’s a cheese-filled pastry native to the Campania region and found at cafes throughout Naples.

After finishing off your breakfast, tour the museum. It includes various archeological treasures from the region, including many ancient statues and monuments.

Walk the ornate halls of the historic churches in Centro Storico

When you finish browsing ancient artifacts, cross Via Foria to reach the historic centre of Naples. If you’re trying to see as many sites as you can in Naples in one day, you’ll want to visit this area early in the day. Centro Storico (Old Town) is where you’ll find several of the city’s most important churches.

The first one you’ll reach is Gesu Nuovo. It’s an interesting church, featuring an odd stone façade that hides an interior filled with opulent décor and art. Across the street is the equally opulent San Domenico Maggiore, with its gold frescoes and relics.

Keep walking east, further into the historic centre, until you find the next group of religious buildings. Basilica di San Paola Maggiore, San Lorenzo Maggiore, and San Gregorio Armeno are clustered together in the heart of the old town.

If you don’t want to visit all three churches, you should at least visit San Gregorio Armeno. Built in the 700s, it’s one of the oldest churches in the city. It has a baroque interior with lots of gold touches and a stunning marble fountain.

Just down the street is the most important landmark in the city. Naples Duomo is a 13th-century cathedral featuring a neo-Gothic façade. It contains several chapels filled with ancient art, mosaics, and religious relics.

Unfortunately, it’s also one of the most visited spots. You’ll likely need to battle a crowd as you travel through the ornate cathedral.

Fill up on tapas as you walk across the Spanish Quarter

From the historic churches, it’s a short walk to the streets of the Spanish Quarter. This neighbourhood starts just on the other side of the Cloister of Santa Chiara.

If it’s still before noon, take a short excursion to explore the Santa Chiara complex. Some of the buildings date back to the 1300s. It includes a church, a monastery, and a museum.

With just 24 hours in Naples, you’ll need to try eating on the go, giving you more time to visit the city’s attractions. Luckily, the Spanish Quarter contains numerous tapas bars. Many of these locations can have a hot plate of appetizers ready in minutes, sending you on your way with a handful of greasy food.

You’ll also pass a Burger King and several other fast-food restaurants, but you should try the local tapas bars and pizzerias. Most of these places open around noon and are found throughout the Spanish Quarter.

Walk south through the Spanish Quarter until you reach the art nouveau façade of Galleria Umberto I. The elegant gallery is covered in glass and iron and houses several shops and cafes. It’s basically a mall with amazing architecture.

Spend a few minutes browsing the stores or order another coffee at one of the cafes before continuing south along Piazza del Plebiscito Road.

Stretch your legs with a trip around the Piazza del Plebiscito

The road outside of the gallery takes you to Piazza del Plebiscito. It’s the largest public square in the city and it is located next to the Port of Naples.

It’s a sprawling public square surrounded by large columns and two historic sites. To the west is the Basilica of San Francesco da Paola. To the east is the Royal Palace, which you can visit later in the trip.

The Basilica features a wide dome, measuring 53 metres tall, designed to resemble the Pantheon. The interior includes several ancient statues while the chapels have historic altarpieces.

At this point, you’ve had the chance to visit about a dozen churches and religious buildings during your tour of Naples in 24 hours. If you don’t want to walk around another church, skip it and grab some authentic Naples pizza at Pizzeria Farina & Company.

The pizzeria is located on the north side of the Basilica, on your way to the next destination. It has outdoor seating, so you can eat while watching people go to and from the public square.

Walk under the city as you explore the Bourbon Tunnel

Across the street from the square, behind the Basilica, you’ll find an underground tunnel. The Bourbon Tunnel is an underground passage, built to connect the military barracks to the Royal Palace. 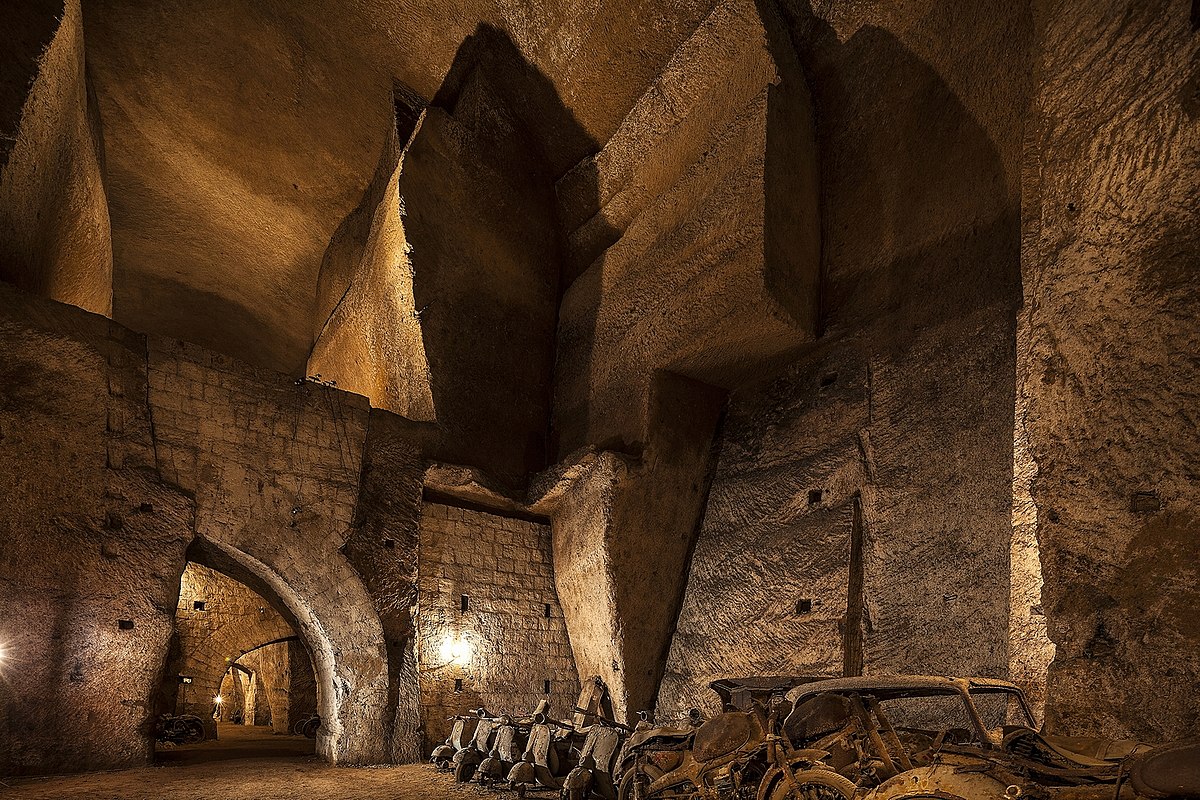 It’s almost 400 years old and contains numerous passageways and cellars. You can’t tour the tunnels on your own. You’ll need to take a tour, but it’s often a fun, fascinating experience. The guides provide a wealth of information about the tunnels and their history.

The original tunnel construction was never completed. The Bourbon dynasty that started the project eventually collapsed. During World War II, it became a bomb shelter, which is why it contains various relics from the 1940s.

It’s also collected a variety of debris over the decades. You’ll pass vintage cars and even a monument to a leader of the early Italian fascist movement.

The tours of the tunnel end at 5 pm and typically take about one to two hours. You may also want to get your tickets ahead of time if you don’t want to miss out.

After emerging from the tunnel, walk south toward the towering Ovo Castle. The imposing fortress stands at the end of the port on a former island.

Over the years, a fishing village developed around the castle. It’s now a popular area known for its seafood restaurants and marina.

The castle isn’t very impressive, but the causeway is a must-see destination. It spans over 100 metres, taking you from the mainland to the island.

The main reason to visit the castle is the tower. If you climb to the top, the tower rewards you with views up and down the coastline. Look north and you’ll see most of the Port of Naples.

Ovo Castle sits at the southern end of the port, leaving a lot more of the seaside to explore. After climbing back down from the tower, start walking northeast along the waterfront.

As you work your way across the Port of Naples, you’ll pass a few more of the top things to do & see in Naples, including the Fountain of Giant.

The 17th-century monument stands near the seafront, a couple of blocks from the Fountain dei Leoni and the Royal Palace of Naples. By the time you start passing these historic sites, many of the attractions will likely have their doors closed.

You can still admire the architecture as you walk past the Royal Palace, the Castle Nuovo, and the Palace of the Immacolatella.

As you pass these historic landmarks, look for a restaurant, bar, or lounge where you can order food or drinks and watch people walk by near the waterfront.

Where to stay: The best hotels for 24 hours in Naples

As the third-largest city in Italy, figuring out where to stay in Naples can sometimes prove challenging. For most travellers with a short layover in Naples, the best area to stay is the Historic Centre where you’ll find many of the city’s top points of interest. Here are a few ideas to start your accommodations search…