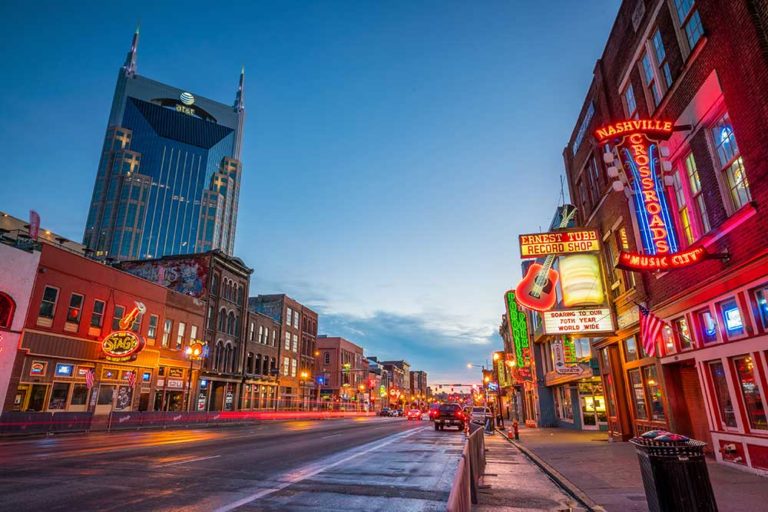 Got an epic Southeast USA trip in the works? You won’t regret carving out at least one day in Nashville. The largest city and capital of Tennessee, Nashville is well-known as the world’s country music mecca. On the streets of Music City, famous country singers like Johnny Cash and George Jones launched their careers.

During your first 24 hours in Nashville, you’ll traverse the rich history of country music. You’ll visit world-famous music venues like the Ryman Auditorium and the legendary Historic RCA Studio B. In the evening, you’ll explore the city through your tastebuds in one of the most famous entertainment districts in the USA.

Don’t know where to go in Nashville in one day? Plan the ultimate time-crunched trip to Music City with this complete 1-day Nashville itinerary.

Looking for more ideas for your trip? Check out our other city itineraries and our United States Travel Guide and Tennessee Travel Guide for more recommendations on when to visit, where to go & what to do!

Where to go in Nashville in one day: A complete 1-day itinerary

Ready to start your one day in Nashville? Fuel up with coffee & breakfast at the Frothy Monkey. Located on 5th Avenue in Downtown Nashville, the local cafe chain is one of the city’s most popular morning hangout spots. 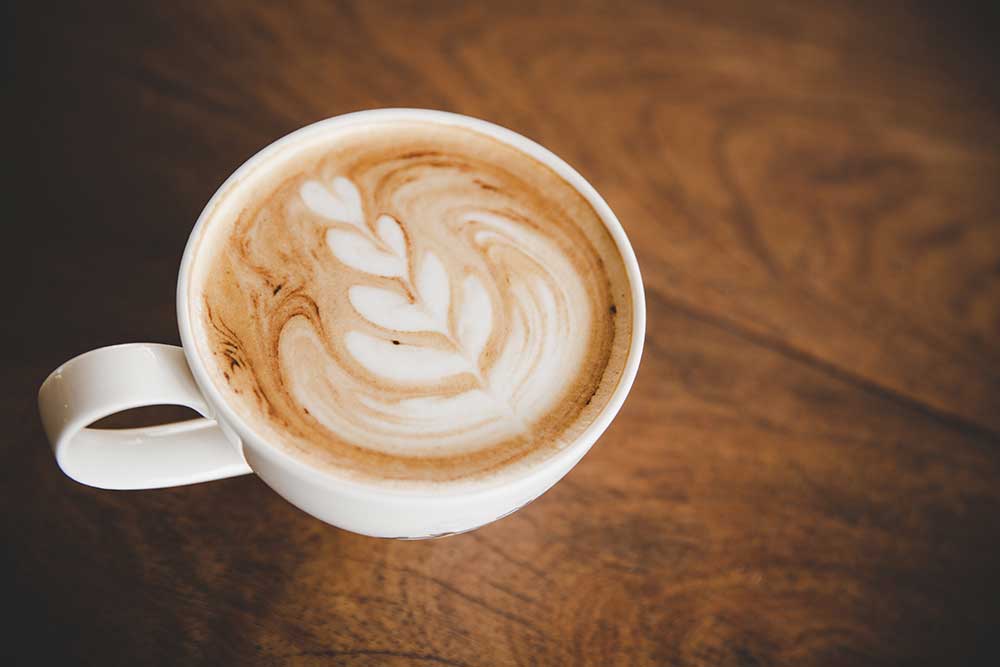 The Frothy Monkey is renowned for their inspired farm-to-table breakfast menu. You’ll also love their selection of signature coffee drinks crafted with beans from their local roastery. 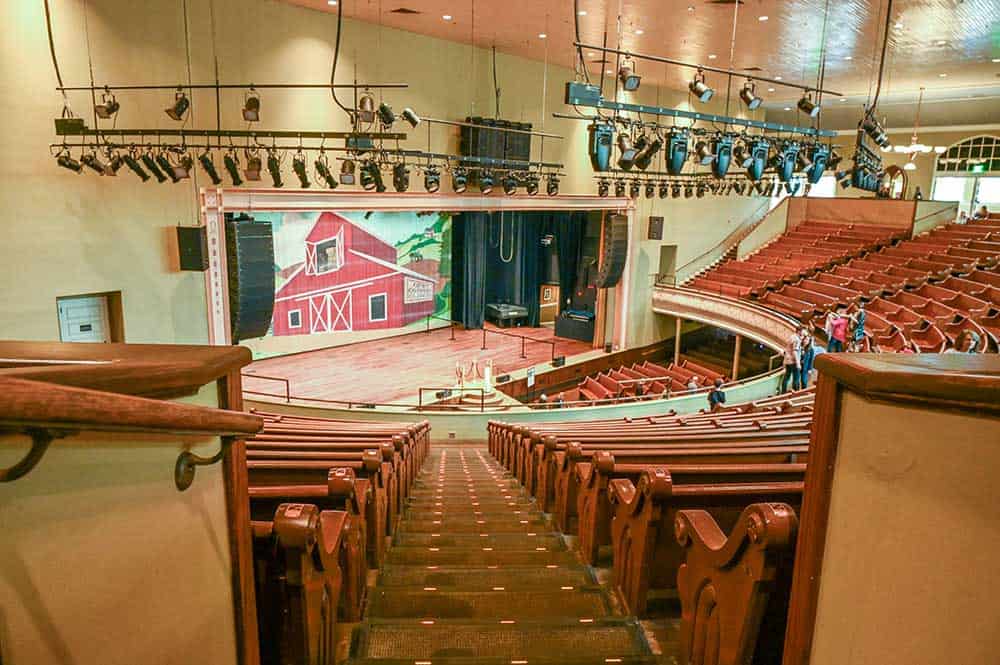 The Ryman Auditorium is hallowed ground for country music fans. It’s so important to the genre that it’s even earned itself the nickname “Mother Church of Country Music”!

To learn all about its impact and history, book a self-guided tour. Don’t leave without standing upon its famous stage in the footsteps of superstars like Johnny Cash and Hank Williams.

From the Ryman, it’s less than a 10-minute walk south to the Country Music Hall of Fame and Museum. Even if you’re not a fan of the genre, the museum is one of the best places to visit in Nashville.

The Country Music Hall of Fame and Museum opened in 1964. Today, it offers one of the world’s most sweeping musical collections. 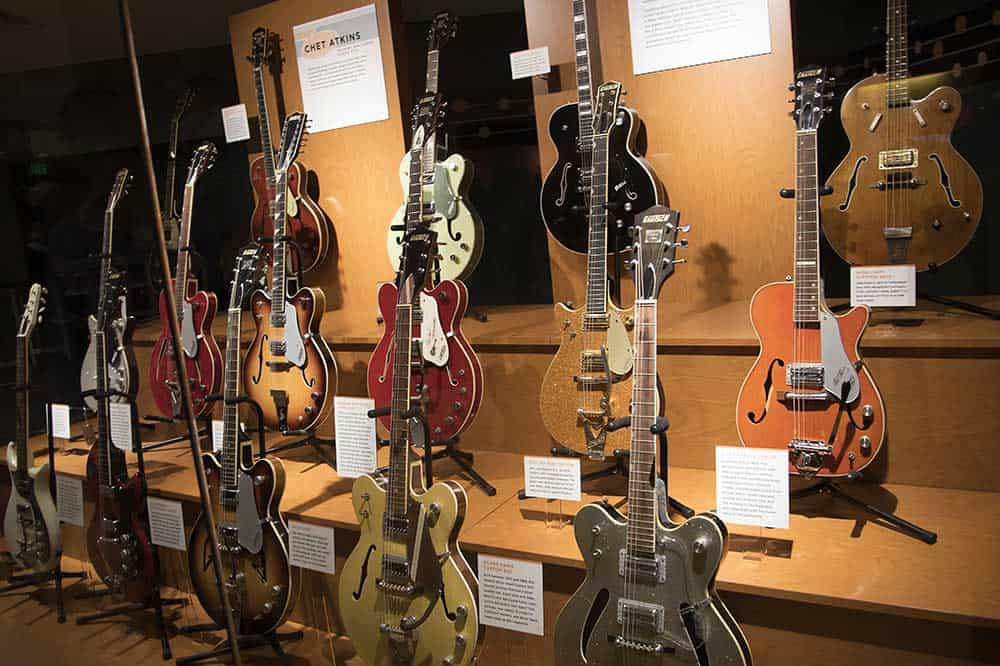 The museum is chock-loaded with interesting memorabilia and interactive exhibits. All pay homage to America’s most popular & influential country music stars. Some of the museum’s most famous artifacts include Carl Perkins’ blue suede shoes and Elvis Presley’s gold piano.

End your self-guided tour of the museum at the Hall of Fame Rotunda. Here, you’ll pay tribute to legendary country music artists like Patsy Cline and Merle Haggard who propelled the genre to new heights.

PRO TIP: Skip the line by booking your RCA Studio B and Country Music Hall of Fame Combo Ticket online.

Tour the Historic RCA Studio B on Music Row

Music City’s musical history continues to shine at the Historic RCA Studio B. The famed recording studio sits within Nashville’s Music Row, southwest of downtown. Music Row gets its name from the string of record labels, studios, and radio stations lining its streets. 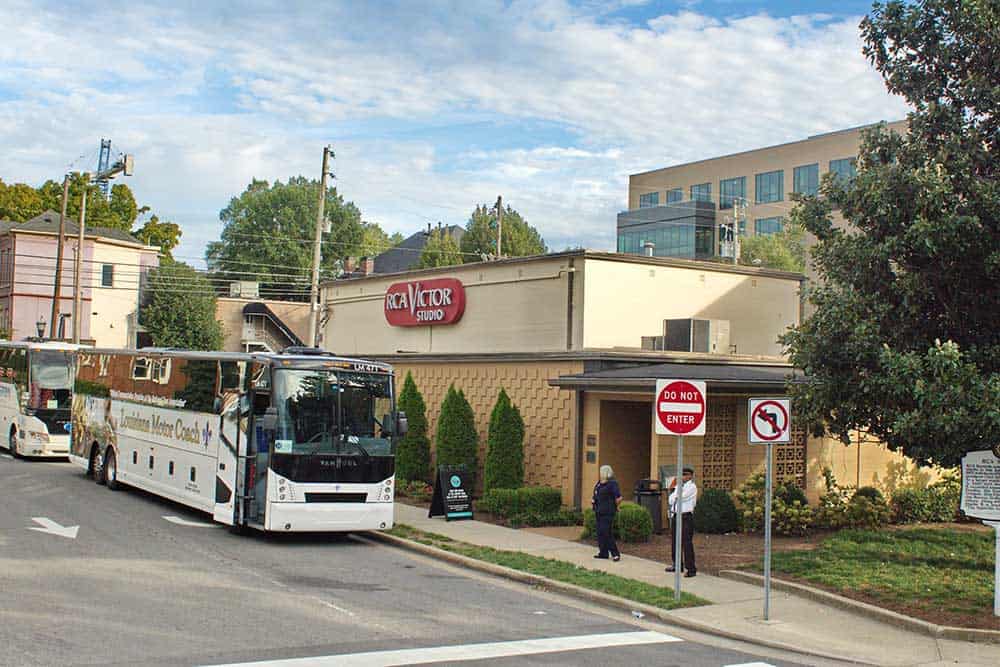 RCA Studio B is often credited with forging the “Nashville sound” and launching the genre’s first megastars’ careers. On a guided tour of the studio, you’ll hear behind-the-scenes stories of famous patrons like Dolly Parton and Willie Nelson. Spend time listening to classic tunes in the same spot that the studio’s legendary producer Chet Atkins once did.

Tours of RCA Studio B depart from the Country Music Hall of Fame. Book your combo ticket online to secure your spot on the tour.

After your studio tour, travel back to Downtown Nashville. By now, you’ll have built up quite the appetite. Good news: You’re in the right place!

The Nashville downtown area is home to a barrage of excellent restaurants, coffee shops, and cafes. Many of the city’s best places to eat lie along Broadway Street and other streets like 4th Avenue and Demonbreun Street. It’s the perfect area to recharge on your tour of Nashville in one day. 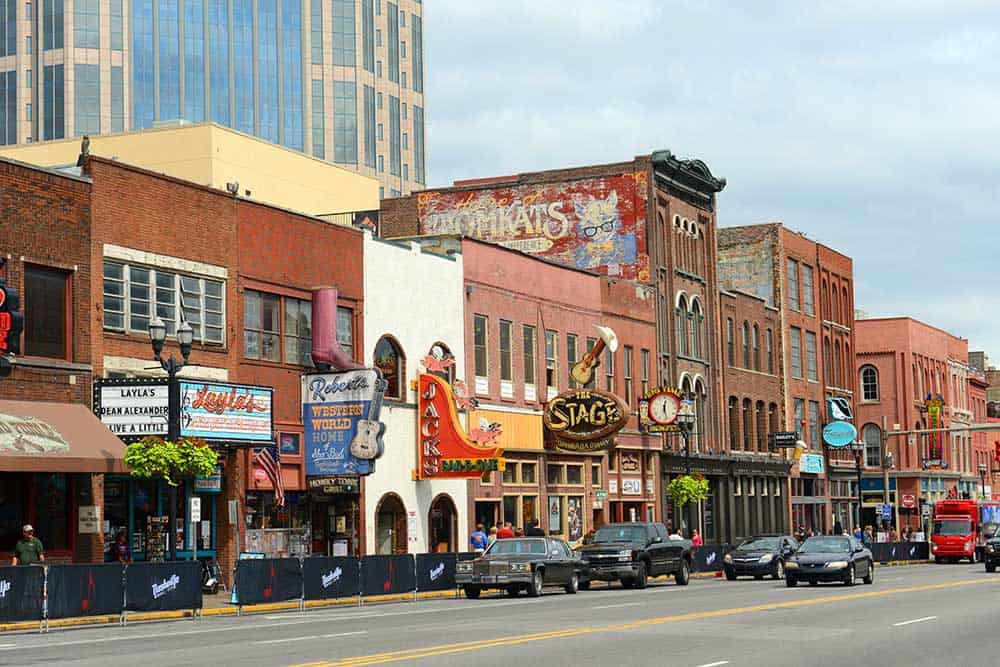 Nibble on Tennessee barbecue at Martin’s Bar-B-Que Joint on 4th Avenue S. The spacious roadhouse-style restaurant is well-known in the city for its pit-fired BBQ, chicken, and burgers.

For inspired Southern cuisine closer to Broadway, check out Merchants. Located beside the Johnny Cash Museum, the nearby Sun Diner is another great choice for unpretentious Southern food.

All fuelled up for the afternoon? Walk off your meal with a stroll over the John Seigenthaler Pedestrian Bridge. The bridge connects the downtown area to East Bank and East Nashville by foot. 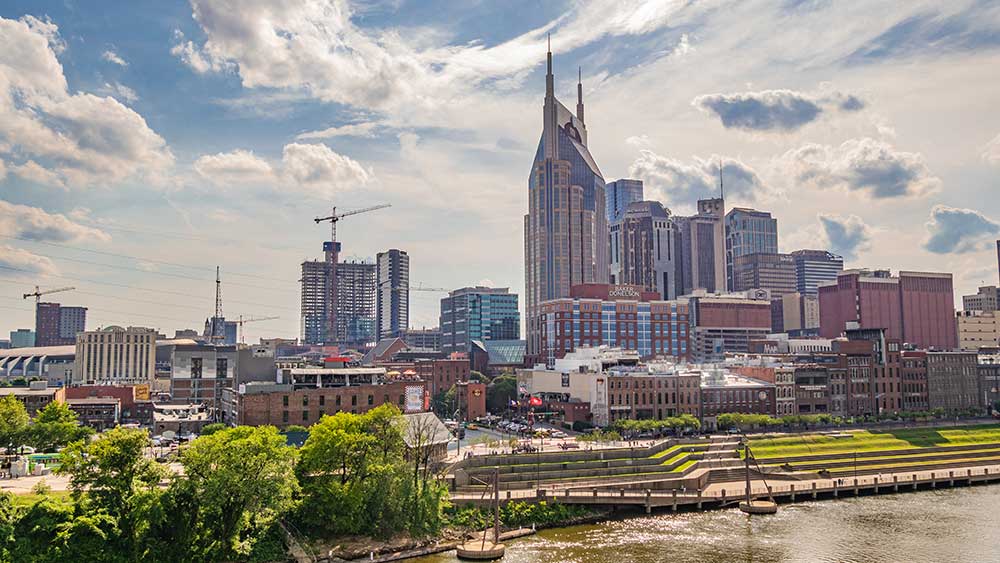 As you walk across the bridge over the Cumberland River, you’ll enjoy some of the finest Nashville skyline views. When you reach the opposite bank, spend time unwinding in Cumberland Park. Relax on the grace as you stare down the downtown cityscape.

Chill out in Centennial Park

From Cumberland Park, walk back over the bridge into the city center. Grab a taxi to head due west to Centennial Park. Located north of Vanderbilt University in Midtown Nashville, the park is a wonderful escape from the bustle.

At 132 acres, Centennial Park is a fantastic urban greenspace. The park teems with relaxing walking paths, gardens, and even a central pond. 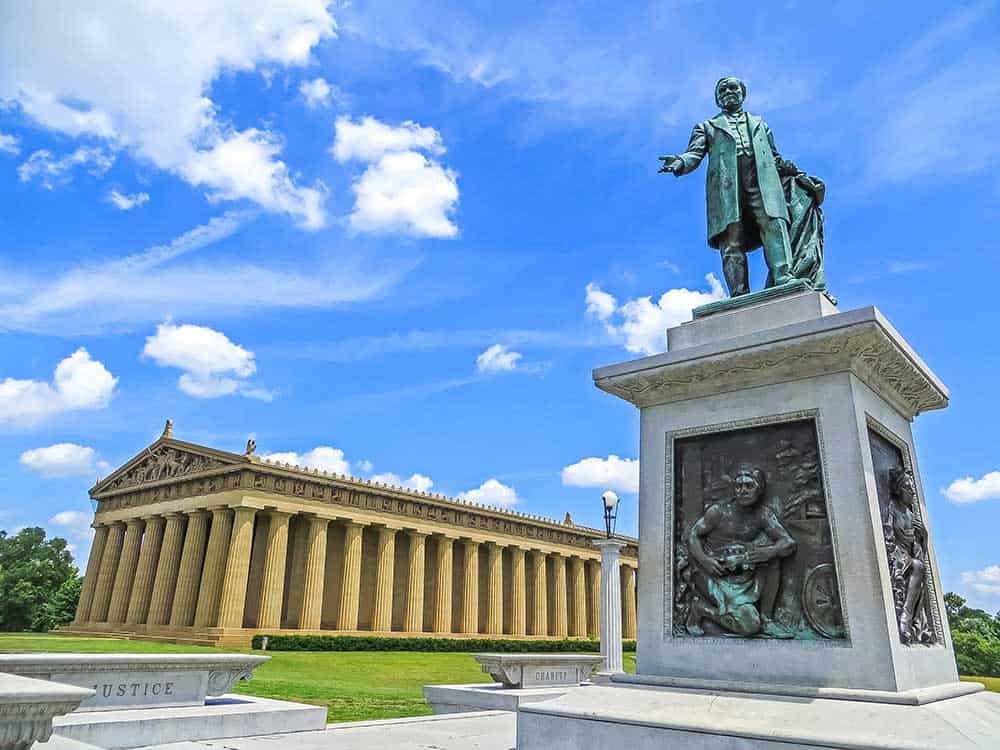 Although the greenery is lovely, the real reason to visit the park is to check out The Parthenon. This full-scale replica of the venerated Greek temple is a sight to behold.

Inside the “temple,” you’ll spot a towering 42-foot statue of the Greek goddess Athena. It’s the largest sculpture of its kind in the Western Hemisphere.

Art lovers should also carve out time on their Nashville itinerary to peruse The Parthenon’s art museum. The gallery’s permanent exhibits feature 63 paintings from 19th- and 20th-century American artists.

Looking for the perfect end to your tour of Nashville in 24 hours? Zip back downtown to enjoy an evening on Lower Broadway. Also called Lower Broad, this popular stretch of Broadway Street sweeps west of the Cumberland River. It’s the centerpiece of one of America’s premier nightlife districts. 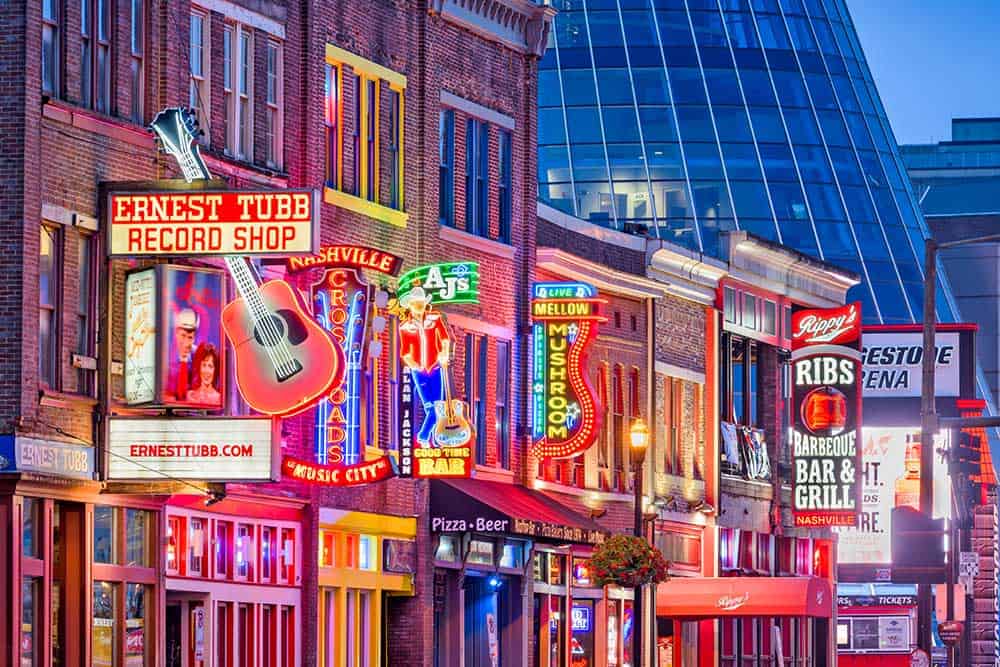 Lower Broadway is jammed with honky-tonks, live music venues, clubs, and restaurants. It’s an exciting area to end your evening. Even if you’re not into the typical bar scene, there’s something to please everyone on Lower Broad.

For laid-back craft beers and pub grub, hit up the Broadway Brewhouse Downtown. To enjoy dinner & drinks with a side of live music, drop in at Honky Tonk Central or Tin Roof.

Fans of country music should carve out time to stop in for a cold beer at Dierks Bentley’s Whiskey Row or Blake Shelton’s Ole Red. For a more historical experience, settle in at Tootsie’s Orchid Lounge.

Where to stay with 24 hours in Nashville

For first-time visitors, the best area to stay in Nashville is the city center. Many of the city’s best hotels lie around Lower Broad, The Arts District, and The Gulch. 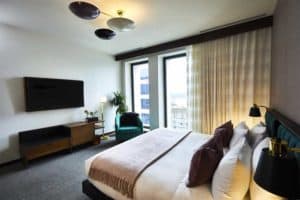 Steps from Broadway, this boutique hotel is one of the finest choices in the downtown area. Rooms shine with crisp modern style. 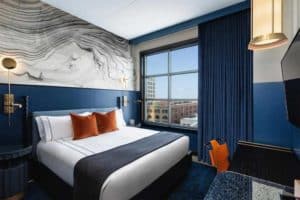 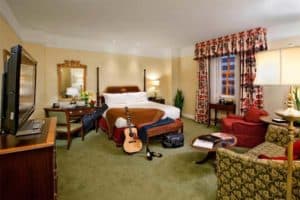 Styled upon a grand American hotel, this luxury property is one of the finest downtown hotels. The hotel’s palatial design is high on old-world charm. 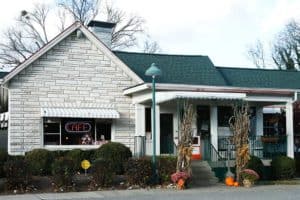 Got extra time in Music City? Start day two with some Southern comfort food at the Loveless Cafe. Located about 25 minutes southwest of the city, this café is renowned for its fresh, authentic Southern biscuits. 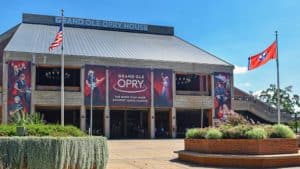 When to visit Nashville

The best time to visit Nashville is from March to May and September to November. In the spring and fall shoulder seasons, the weather is at its best. You’ll enjoy warm temperatures without inching into its uncomfortable summer highs. 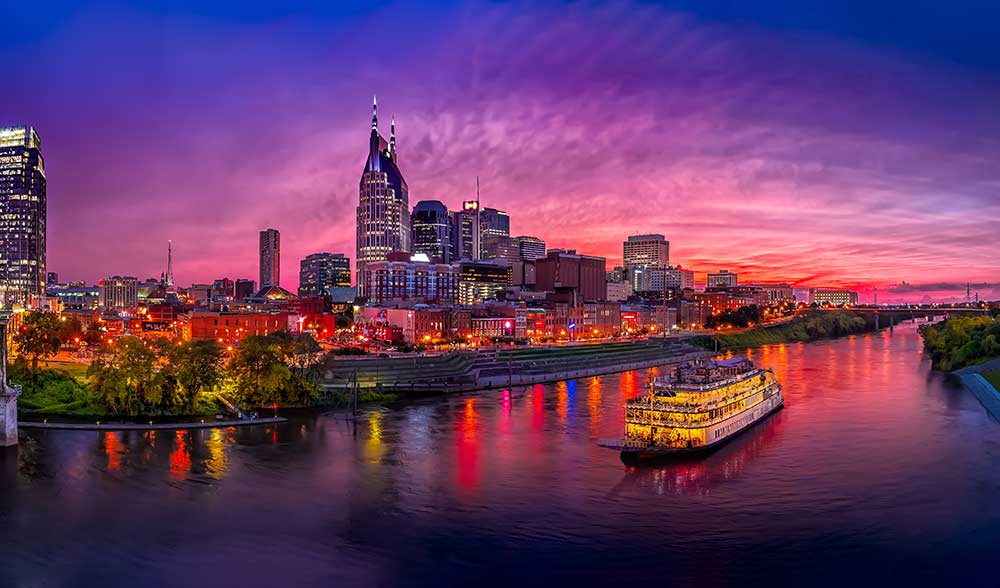 Nashville’s tourism high season falls in the summer months between June and August. In summer, hotel rates are at their highest and availability at its lower.

There is, however, plenty going on in the city in summer. If you’re into cultural events (and can handle the heat, high prices, and crowds), consider visiting at this time of year.

How to get to Nashville

Nashville is well-connected by road to cities in Tennessee and its neighboring states. Popular routes and estimated driving times include: