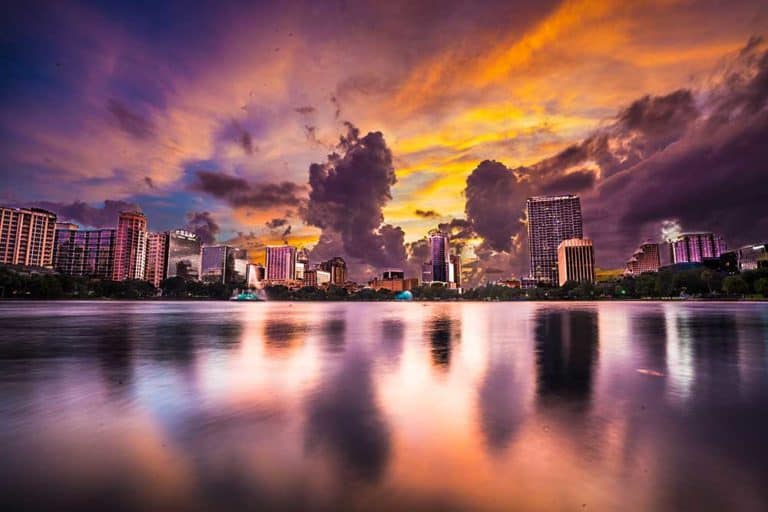 Almost every Florida trip itinerary starts with at least one day in Orlando. Located in central Florida, Orlando is the most popular tourist destination in the United States. Over 75 million visitors from the US and around the world roam around Orlando every year.

Among travelers, Orlando is most renowned for its world-famous theme parks. Attractions like Walt Disney World, Universal Orlando Resort, and SeaWorld steal the show. Of course, you could spend your first 24 hours in Orlando at any one of them. But park hopping is a little too obvious. Instead, let’s go for a little adventure.

Beyond its family-friendly attractions, Orlando is a great city to explore. The city teems with museums and art galleries set between leafy parks & gardens and shimmering lakes. Roaming the streets, you can slip into trendy cafés, restaurants, bistros, and brewpubs.

Don’t know where to go in Orlando in one day without stepping foot in a theme park? Follow along with this complete 1-day Orlando itinerary.

Looking for more ideas for your trip? Check out our other city itineraries and our Florida Travel Guide for more recommendations on when to visit, where to go & what to do!

Where to go in Orlando in one day: A complete 24-hour itinerary

Fuel up with coffee in Winter Park

To start your one day in Orlando, wake up and head to the suburb of Winter Park. Located north of downtown Orlando, Winter Park is a pleasant city known for its outdoor spaces, museums & art galleries. 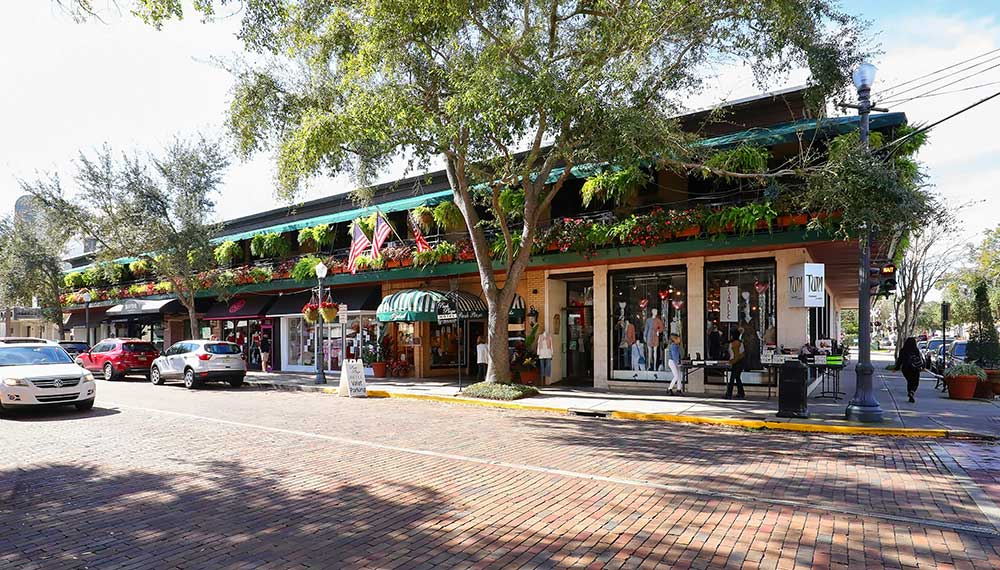 Downtown Winter Park centers around North Park Avenue. Stroll around its charming central shopping district. Settle down at one of its cool cafés to fuel up with a coffee & breakfast. For a more local feel, skip Starbucks and try Barnie’s Coffee & Tea Co. on S Park Avenue.

Walk around the Mead Botanical Garden

From Downtown Winter Park is about 30-minute walk or less than a 10-minute drive to Mead Botanical Garden. The 47.6-acre garden spans several different ecosystems. You’ll wander past beautiful flower gardens, ponds, and even a butterfly garden. 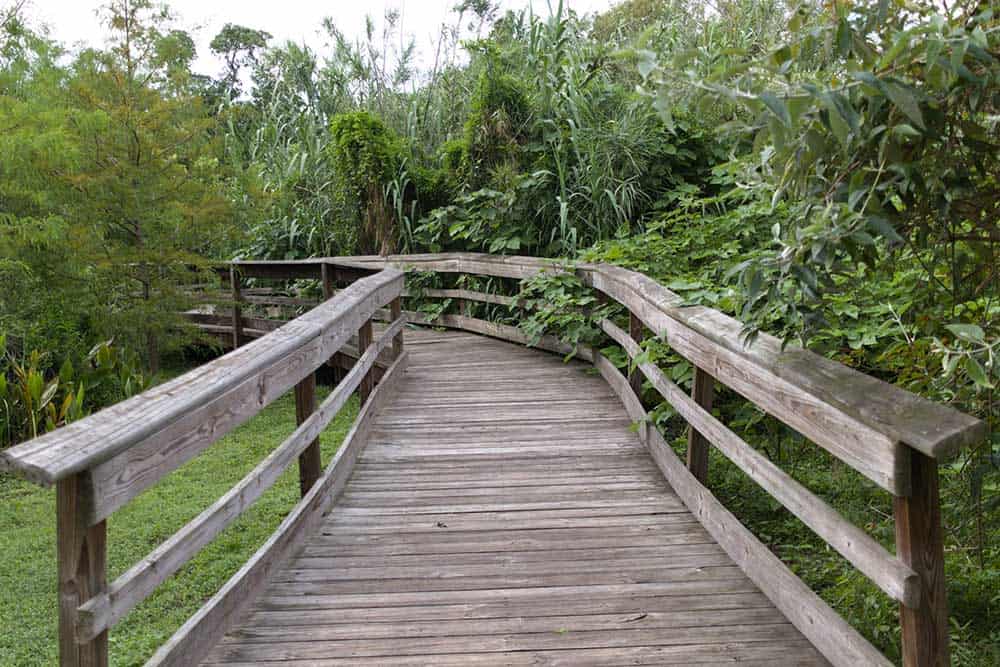 Mead Botanical Garden is also listed on the Great Florida Birding Trail. Bring your binoculars. Walking along its pathways, you can spot species like great blue herons, cardinals, and woodpeckers.

The garden is a wonderful place to visit earlier in the morning on your first 24 hours in Orlando. It’s at its quietest during the first couple hours after its 8 am opening. Admission is free.

Browse the Orlando Museum of Art

From Mead Botanical Garden, it’s a 30- to 35-minute walk to the next stop on your Orlando itinerary, the Orlando Museum of Art. Skip the most direct walking route. Instead, opt for the more scenic walk via Lake Shore Drive. The road skims along the shores of Lake Sue and Lake Rowena. Alternatively, it’s a 5-minute drive to the museum via North Mills Avenue. 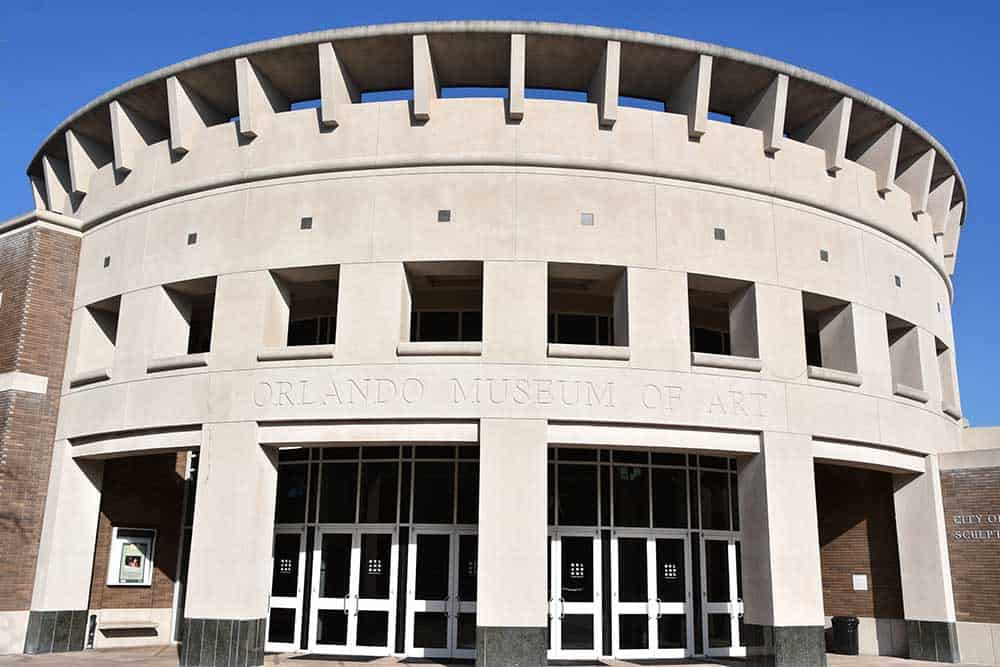 The Orlando Museum of Art is located in Loch Haven Park between Lake Estelle and Lake Formosa. Opened in 1924, the museum has amassed a collection of 2,400 artifacts. The exhibits focus mostly on modern American art and African art. The museum also hosts one of the largest collections of ancient American art in the Southeastern USA.

The museum neighbors several other excellent museums & art galleries. If art isn’t your thing or you’re traveling with kids, head next door to the Orlando Science Center instead. For more American art, The Mennello Museum of American Art is just south of the park, too.

From the Orlando Museum of Art, walk along the northern shore of Lake Rowena. Within about 25 minutes you’ll land yourself at Harry P Leu Gardens. If you’re driving, it should take less than 10 minutes. 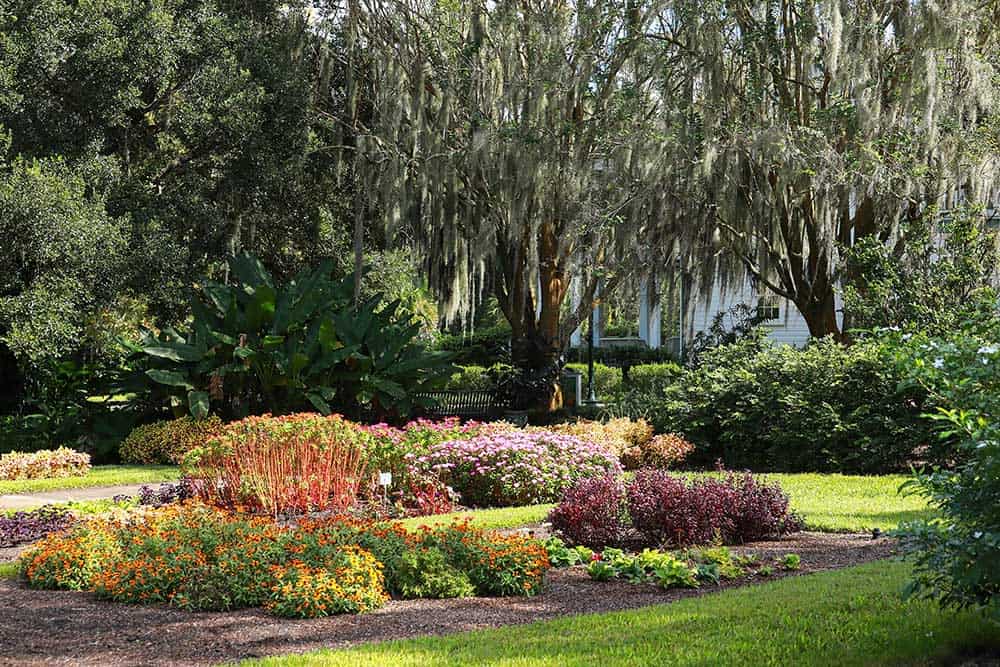 Harry P Leu Gardens spans almost 50 acres of tropical & sub-tropical gardens. Wander among its trails, shaded under oaks dating back hundreds of years. On the way, you’ll stroll alongside hundreds of exotic flora species from around the world. Most prominent is the collection of over 200 varieties of camellias.

For history buffs, the gardens are also home to Leu House Museum. Although currently at limited capacity, you can tour the National Historic Register home daily between 10 am and 1 pm. (Leu House Museum is closed on Mondays.)

Harry P Leu Gardens sits on the northern edge of Colonialtown. Continue your tour of Orlando in one day in Orlando with a short walk into this charming neighborhood.

After you’ve fuelled up in Colonialtown, it’s a 30-minute or 5-minute drive to Lake Eola Park. The park is an oasis in Orlando’s Central Business District. From the lake’s eastern shores, you’ll enjoy fantastic views across the water to downtown. For locals and travelers alike, it’s one of the best places to see in Orlando.

Stroll around Lake Eola Park, spotting ducks and swans along the lakeshore. If you’ve got extra time, you can even rent a paddleboat for a leisurely paddle around Lake Eola. 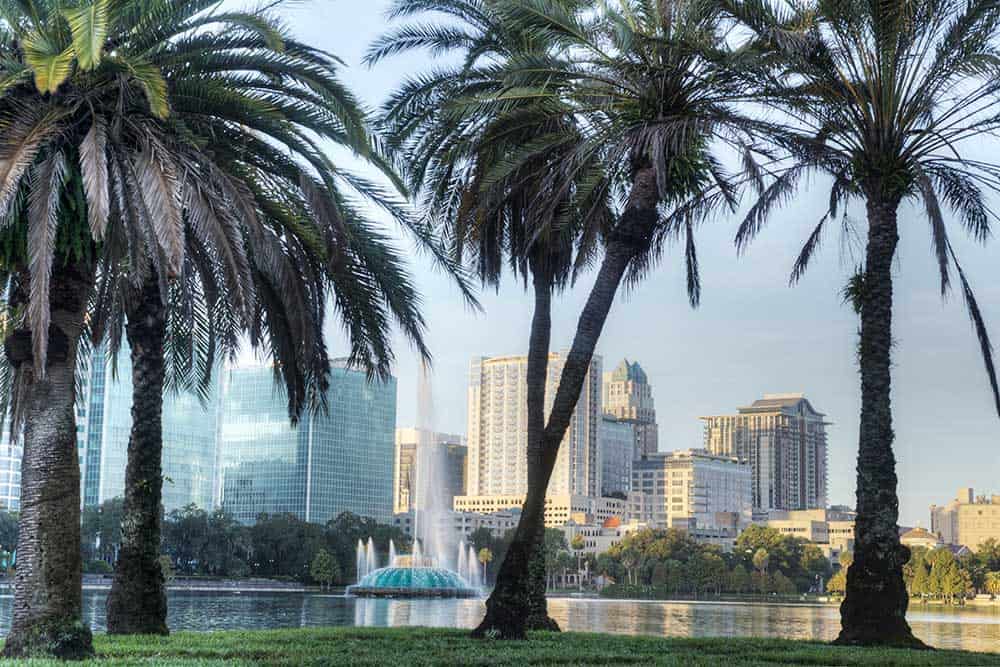 Beer lovers can pop into the World of Beer on the southern edge of the park. This popular gastropub features a menu of over 500 beers from around the world.

Visiting Lake Eola Park on a Sunday? Be sure to also carve out time to visit the Orlando Farmers Market. The weekly vendors market takes place in the southeastern corner of the park. 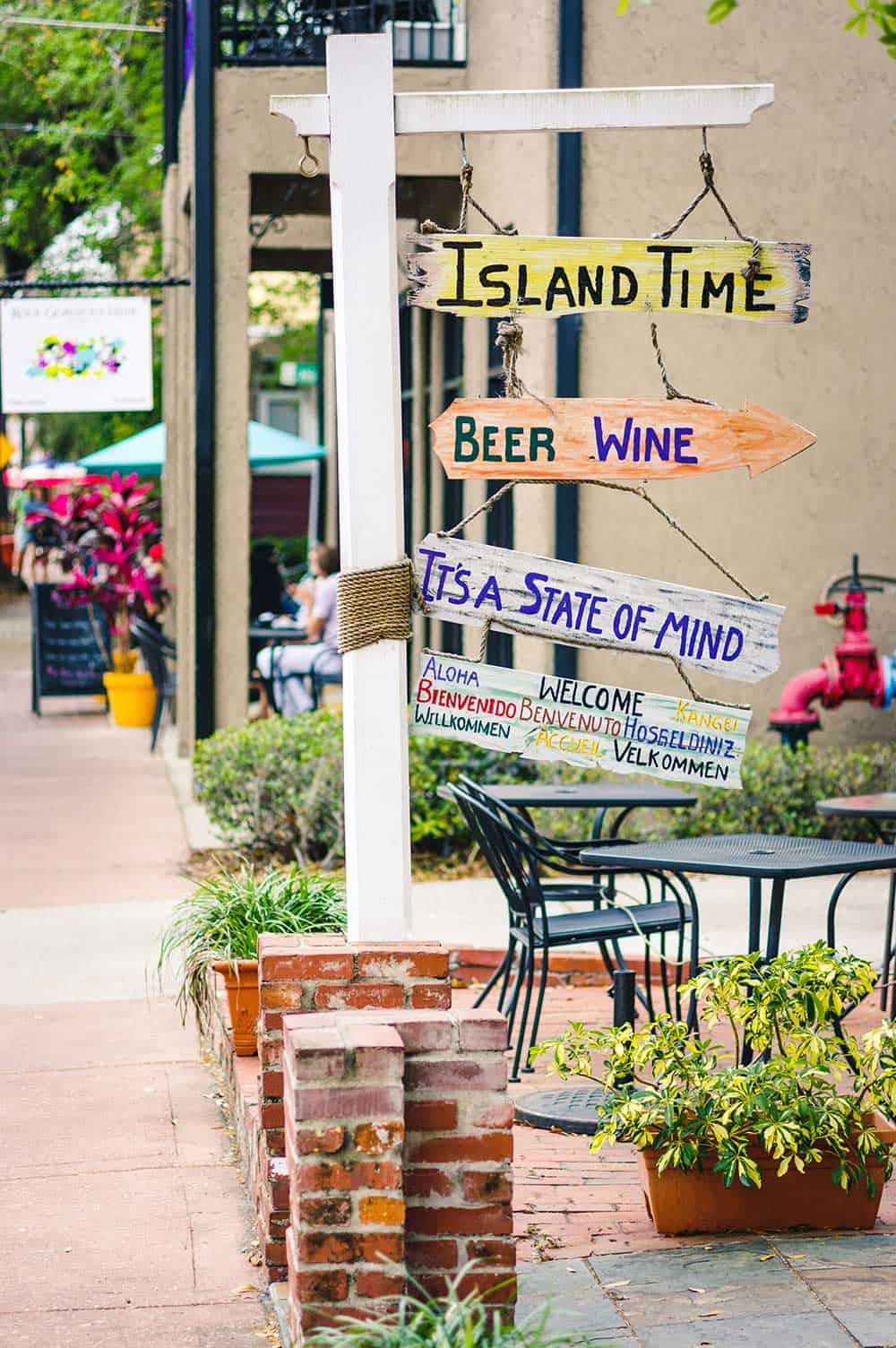 Dubbed as “Downtown for Grownups,” Thornton Park centers around Washington Street. Along the drag, you can enjoy drinks & snacks from morning till night. A few of the most popular stops include burgers at Graffiti Junktion and craft beer & street food at Falcon Bar & Gallery.

From Thornton Park, it’s less than a mile west to the heart of Downtown Orlando. The downtown centers around Central Boulevard and Orange Avenue. The area presents some of the city’s best eating, drinking, and entertainment options. It’s a great place to end a day of sightseeing. 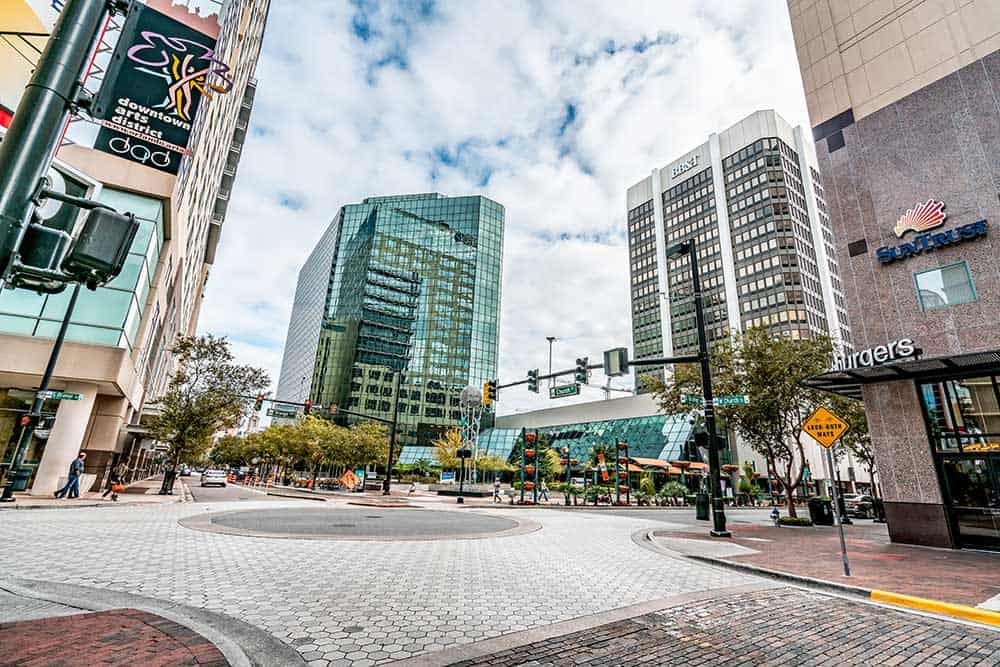 Among the restaurants are taquerias, burger joints, and international bistros. For pub grub and drinks in a laid-back trendy setting, check out Downtown PourHouse. Or to tackle your steak & seafood cravings, cocktail in hand, pop into the Kres Chophouse.

Where to stay with 24 hours in Orlando

As with any popular tourist destination, choosing where to stay in Orlando isn’t always simple. For this time-crunched travel plan, the best area to stay is in the city center. It’ll allow you to stick close to all the action. If you’re more interested in the theme parks, consider staying outside of the city center. 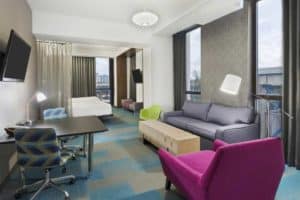 Like all the hotels in its portfolio, this Aloft hotel sits in the heart of the city center. Its characteristic funky room designs are sure to charm. You’ll also love cooling down in the outdoor pool. 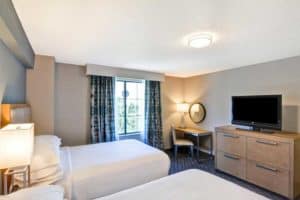 For a little extra space, grab a room at this mid-range hotel. All the suites center around a spacious sitting area for your comfort. Amenities include an outdoor pool and fitness center. 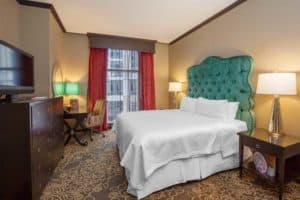 One of the city’s top luxury hotels, the Grand Bohemian Hotel is bound to get your attention. The hotel sits in the city’s Arts District. Rooms showcase regal elegance mixed with modern amenities. The views from the rooftop pool are outstanding.

Traveling to Orlando with kids? There’s a chance you’ll spend much of your Orlando trip itinerary at Walt Disney World Resort. The world-famous Disney World consists of four separate theme parks. Each section of the park could take a full day to explore on its own. 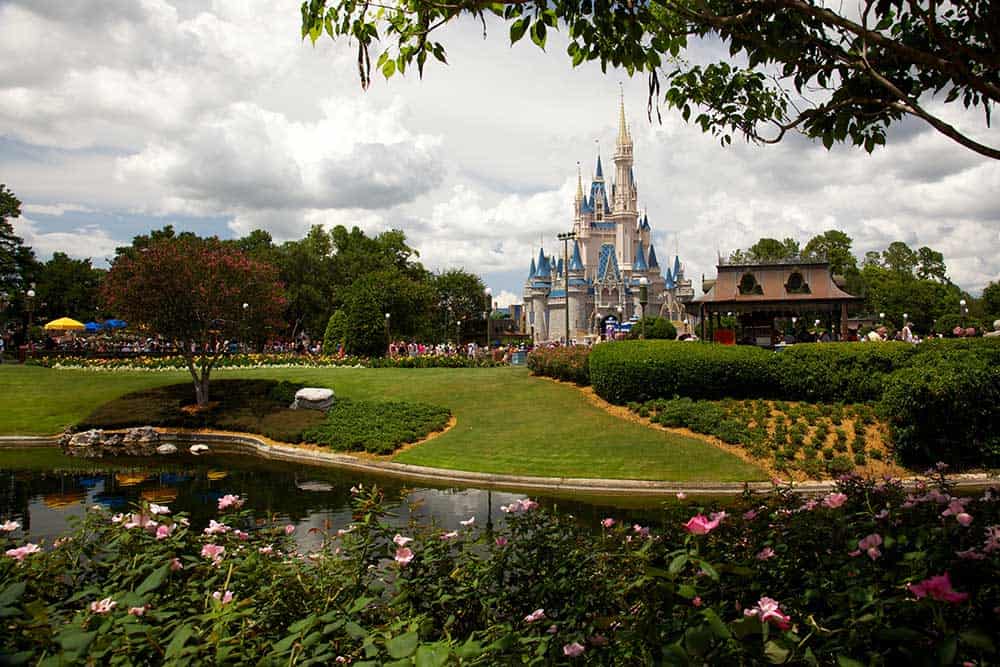 Your little future travelers will love spending time at Epcot. For thrills, drop into Future World, home to the theme park’s two main rides. At World Showcase, you’ll stroll through 11 different exhibits based on countries around the globe.

Don’t want to pay to enter the park? Head over to Disney Springs. Formerly known as Downtown Disney, Disney Springs is an outdoor shopping plaza covering 120 acres. At Disney Springs, spend time shopping along the main street. There’s also a handful of theme restaurants for the whole family to enjoy a fun meal. 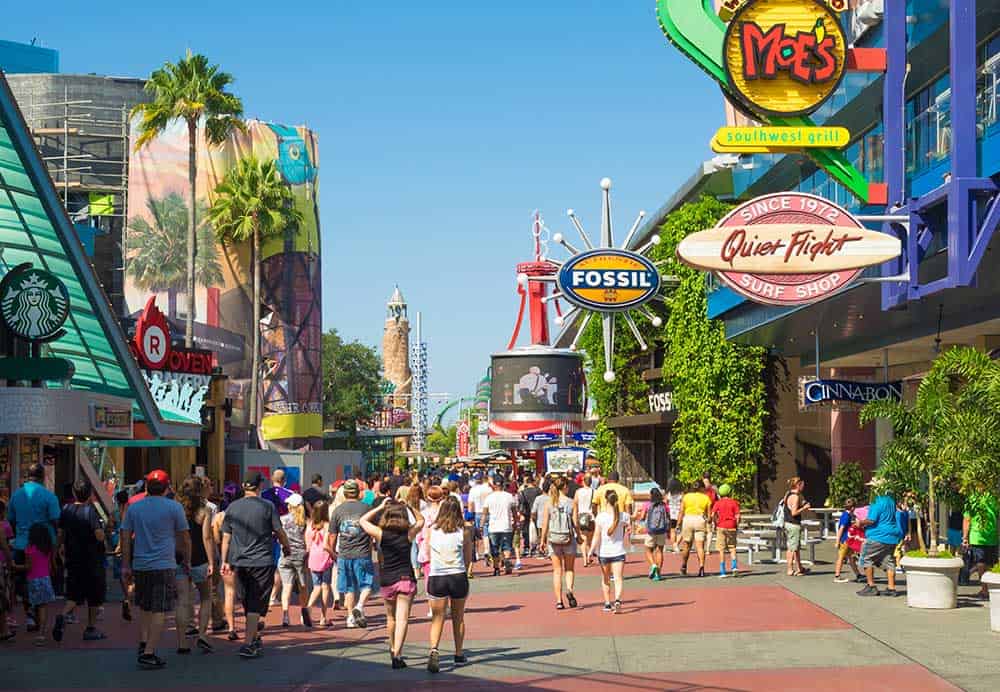 Elsewhere, you can cool down at the new waterpark, Volcano Bay. Or take a stroll and grab a bite to eat along the Vegas-like Universal City Walk. 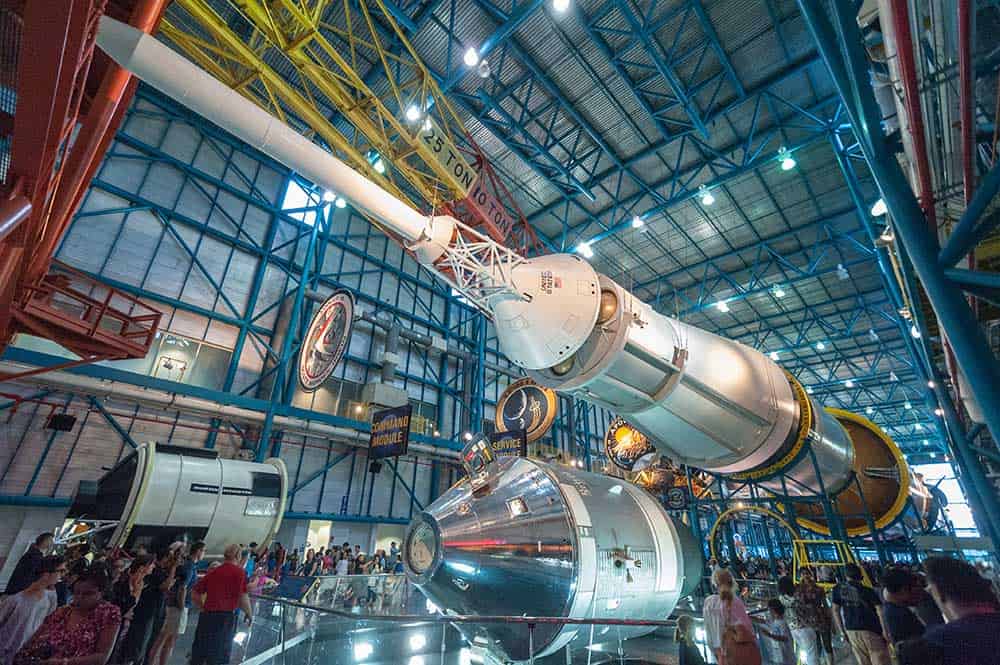 For space enthusiasts, no Orlando attraction is more fascinating than the Kennedy Space Center. At the visitor center, you’ll learn everything you ever wanted to know about NASA’s American space programs.

Be sure to sneak a peek at the Saturn V rocket, Apollo Lunar Module, and Apollo 14 Command Module. They’re on display in the Apollo/Saturn V Center.

Charles Hosmer Morse Museum of American Art sits among a cluster of art museums in Winter Park. The museum is famed for its large collection of art nouveau. It’s also home to the largest collection of artwork from American artist Louis Comfort Tiffany. 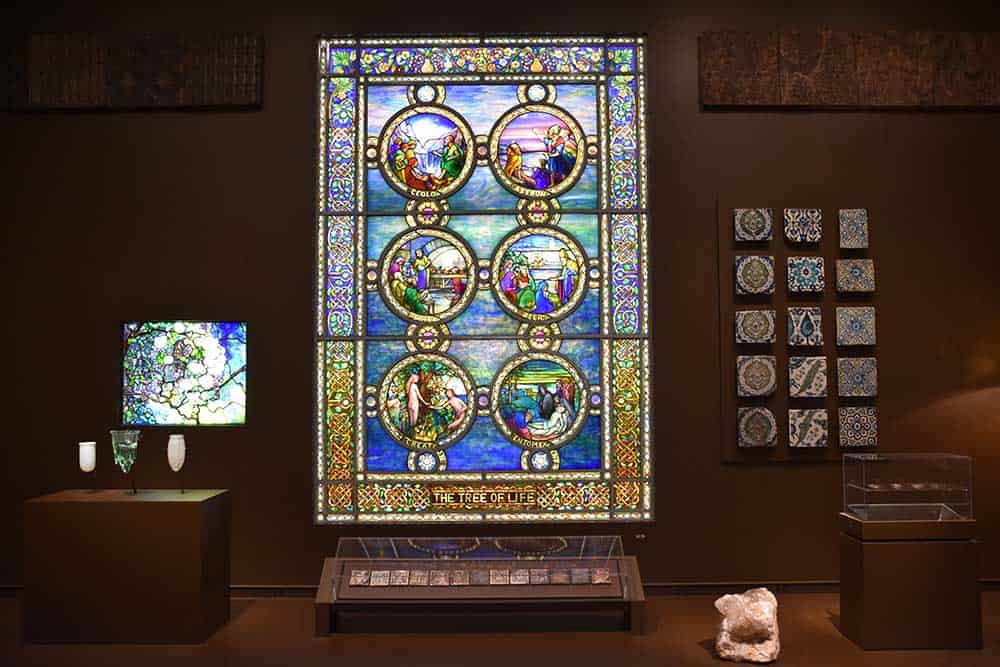 If you’re an art lover, add a visit to the Charles Hosmer Morse Museum into your morning. The collections of stained glass, mosaics, furniture, and jewelry are unique among the area’s art museums.

When to visit Orlando

The best time to visit Orlando is between February and May. During these spring months, you’ll enjoy pleasant weather and sunny skies. Outside of school holidays, you’ll also get cheaper accommodation prices and better availability. 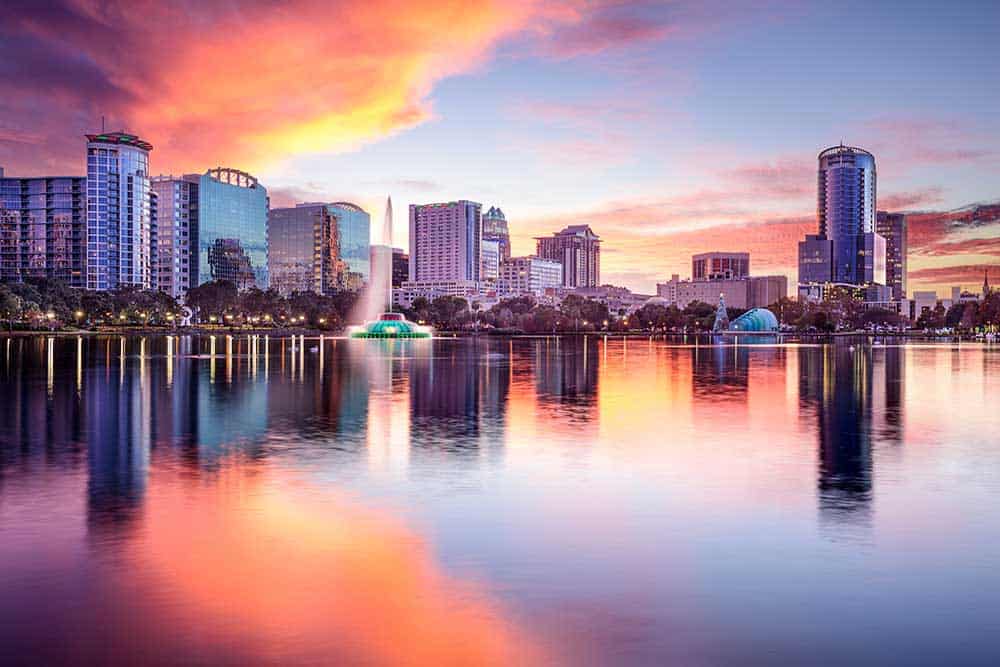 Hurricane season affects Florida between June and November. Although it affects the coast more than central Florida, summer is still not one of the better times to visit the city.

The heat & humidity can get oppressive in summer. Temperatures can soar as high as 33ºC (91ºF). June to September are also the wettest months of the year.

How to get to Orlando

You can reach Orlando from several major cities in Florida. Some of the most popular routes and fastest driving times include: