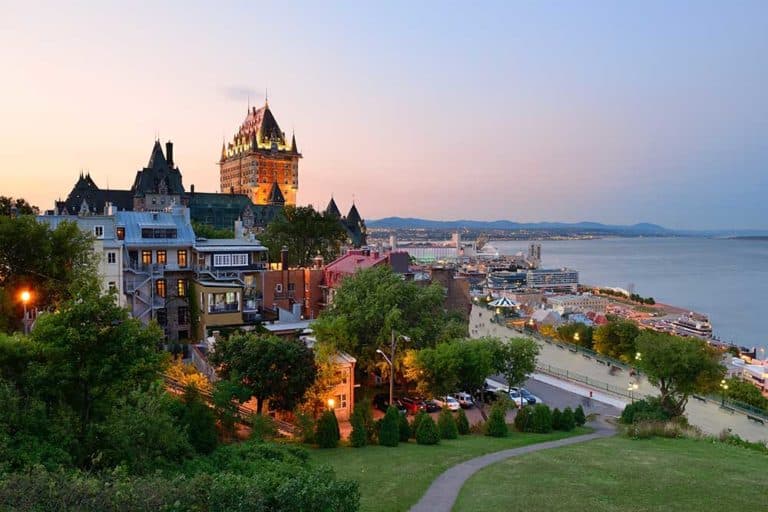 Quaint, modern or historic, whatever tickles your fancy, you can find it with one day in Quebec City, Canada. The 400-year-old city is a traveller’s dream. There’s plenty to see & do in Quebec City in 24 hours. The streets of the Old City (Vieux Québec) are packed with shops, restaurants, and boutiques. The historic centre exudes the charm of an old French city.

While French is the official language of Quebec, most locals speak some English. You should have no trouble enjoying your first 24 hours in Quebec City to the fullest.

Not sure where to go in Quebec City in one day? Plan your trip with this complete 1-day Quebec City itinerary.

Got more travel plans on the horizon? Check out all our other attractions guides and our Canada Travel Guide for more ideas on where to go, when to visit & what to do!

Where to go in Quebec City in one day: A complete 1-day itinerary

Québec City is compact. With most of the best tourist sites within walking or cycling distance, spending one day in Quebec City is a doddle. The city has no subway, but it’s serviced by regular and convenient buses.

Parts of the Old City (Vieux Québec) are steeply inclined. Be sure to wear comfortable shoes. Once you hit those pretty cobbled roads, you’ll want to see as much as possible of a city reminiscent of Europe.

Live it up at the Fairmont le Château Frontenac

Start your first 24 hours in Quebec City at the majestic Chateau Frontenac. This magnificent Châteauesque-style building dominates Upper Town. Built in 1893 by the Canadian Pacific Railway, the historic hotel boasts 661 rooms. In its long past, the Chateau Frontenac hosted prominent guests like Celine Dion and Charles Lindbergh. The famous hotel is truly a Québec City landmark. Its peaked copper roofs are visible from almost every corner of the Old Town. 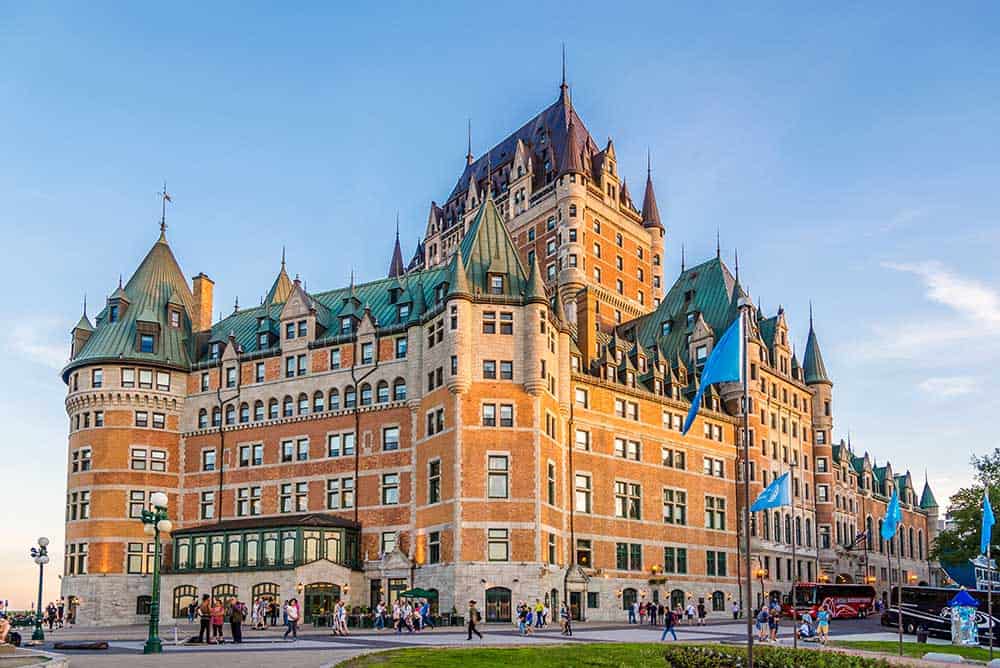 This opulent hotel is free to enter if you just want to look around. Better still, settle down for a coffee or indulge in a delicious breakfast before you start your Québec City adventure. Alternatively, not far off, Rue Saint-Jean is one of the best streets to find a good restaurant for breakfast. There are plenty of things to see & do in Quebec City. You’ll want to start your day in this beautiful city well fed.

The entrance of the Fairmont le Château Frontenac leads onto a pretty river promenade, Terrasse Dufferin. The boardwalk offers picturesque views of the St Lawrence River and the old town below. Make sure to look out for the many performers who make an appearance at Dufferin Terrace.

When you’re done strolling along the river, take the funicular down from Upper Old Town to Lower Town. The funicular was built in 1879 to connect Upper Town to the lower level. Also, look out for the statue of the French explorer Samuel de Champlain standing above the funicular. He stood among the first Europeans who settled the area in 1608. 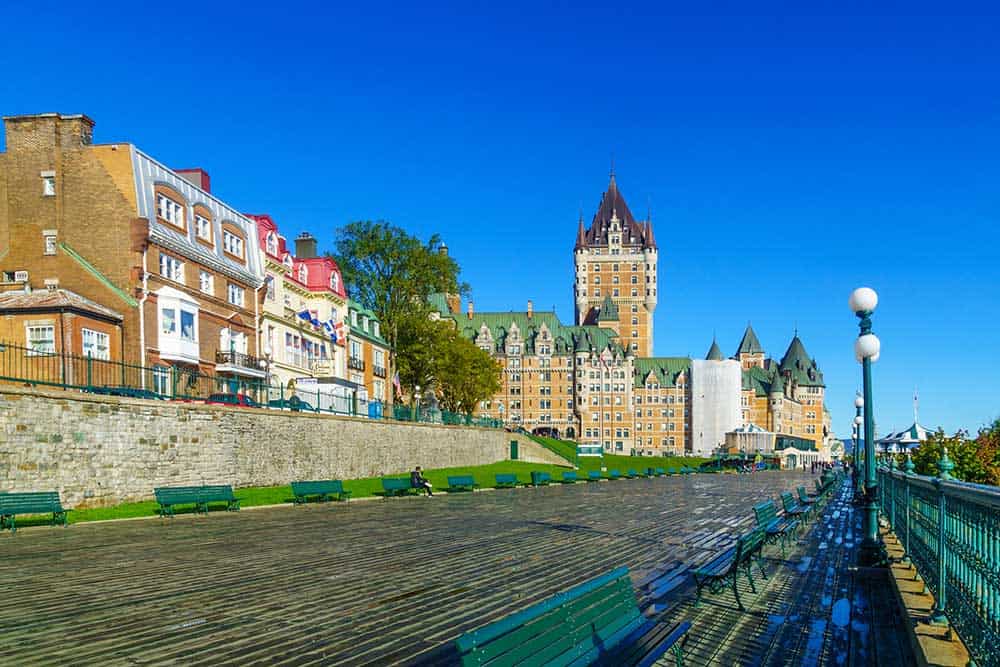 If you’d prefer to sweat out your petit dejeuner, you can also take the stairs that run alongside it. Either way, your reward will be stunning views of the Old Town below.

There’s also a toboggan slide on the way down. During the winter months, it’s a source of great fun and games. You can even reach exhilarating speeds of up to 70 kilometres per hour. The slide is open from the middle of December to the middle of March. If your day in Quebec City happens to fall at any other time of the year, you may want to schedule a return visit to try it out.

Place-Royale is the site of the first European colony in Canada. It resembles a typical old city square in France or Belgium. The French signs and cobblestone streets give Place-Royale an authentic old European feel. Around the square in Quartier Petit Champlain, you’ll discover several pretty alleys and lovely historic buildings.

The buildings surrounding Place-Royale have been restored to their 17th and 18th-century charm. While in the Petit Champlain district, look for the beautiful Notre-Dame-des-Victoires. It’s one of Canada’s oldest stone churches, built in the late-17th century. 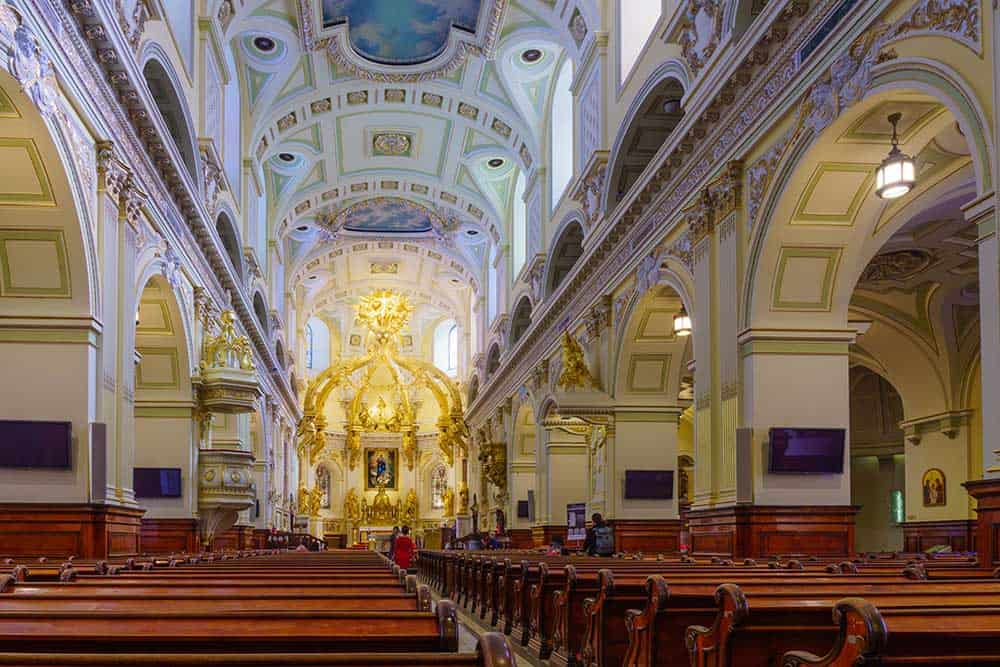 In the area, you’ll also find the Notre-Dame de Québec Basilica-Cathedral. Built in 1647, this National Historic Site of Canada is the country’s oldest church and its first minor basilica.

Once voted the most beautiful street in Canada, Rue du Petit-Champlain is not to be missed in your 24-hour Quebec City itinerary. Don’t forget to check out the lovely colourful frescoes while roaming around Lower Town. The murals depict some of Quebec’s most famous citizens, including Félix Leclerc and Louis Joseph Papineau. 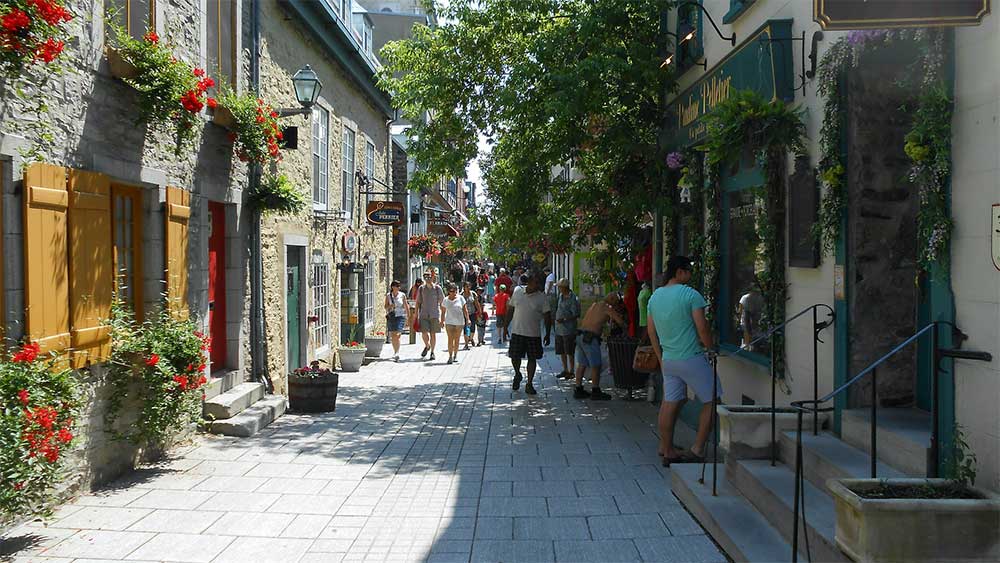 The heart of Quebec City has plenty of restaurants, shops, cafes, and boutiques. The area around Quartier Petit Champlain is a the perfect spot to go shopping and to find delicious food.

Try out North America’s oldest grocery store Épicerie J.A. Moisan. It was founded in 1871 and still serves gourmet meals that you can eat in-store. Also recommended is a visit to the Library Claire-Martin. It’s a quaint book shop in a beautiful former church, St Matthew’s Anglican Church.

Once you’re done shopping & eating, make your way to the Old Port area on the Saint Lawrence River. The Old Port is full of picturesque streets lined by quaint old houses, shops, restaurants, and art galleries. It’s the perfect place to take a stroll or hire a bike and get to see so much more. 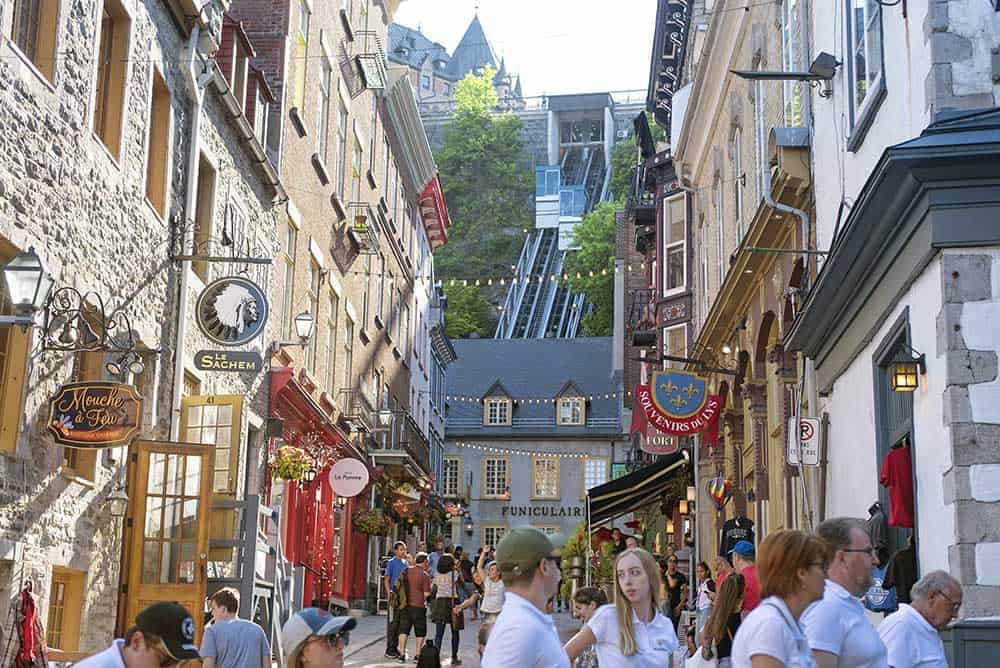 Built up an appetite on your journey? Gobble down a poutine lunch. Poutine is a famous Canadian dish consisting of French fries smothered in cheese curds and brown gravy. It originates in Quebec, where it’s still a gastronomic favourite. There are many variations of poutine. When in doubt, the classic version won’t disappoint.

If you’re visiting Quebec City in winter, throw a chocolate chaud in a warm cozy cafe into the mix. The hot chocolate & marshmallow treat will take the chill out of the day.

Take a ferry across the river

Take the opportunity to see the stunning city centre of Quebec City from a different viewpoint. Jump onto the Quebec City-Levis Ferry. It’s a twelve-minute trip across the river to the nearby town of Lévis. Along the way, you’ll enjoy stunning views of the city from the river. 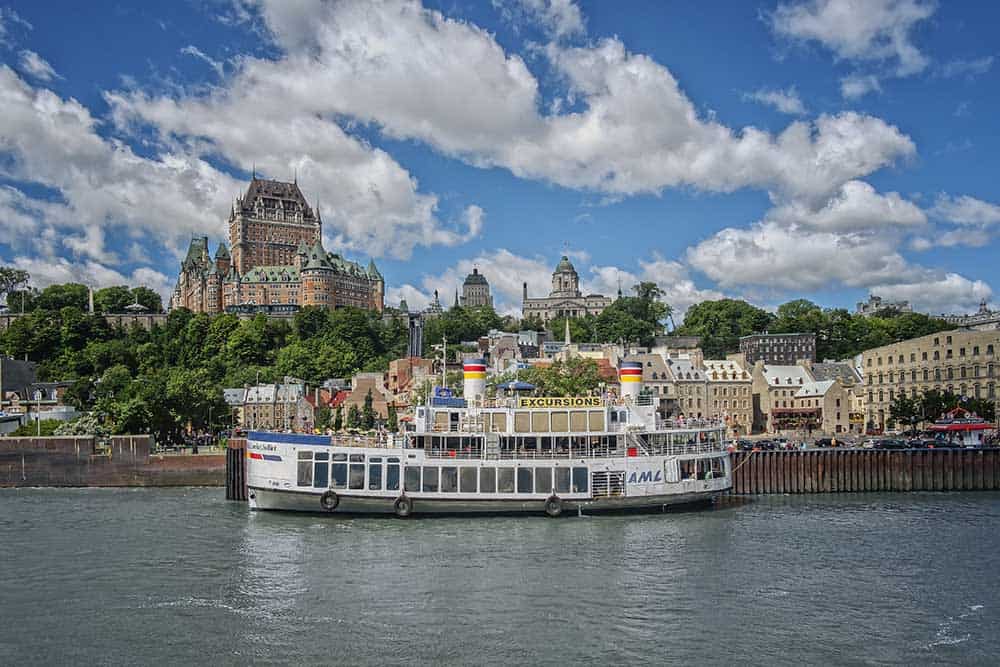 Choose your time from early morning to late at night. The night views from the river are a sight to behold.

Quebec’s Old Town is a UNESCO World Heritage site. Surrounded by city gates and a stone wall, it’s the only walled city in North America outside of Mexico. Explore the wall from the top of the ground.

Take a walk along the wall to view the Parliament Buildings, built between 1877 and 1886. If you have time during your Quebec City trip plan, you can take a free guided tour of the buildings. 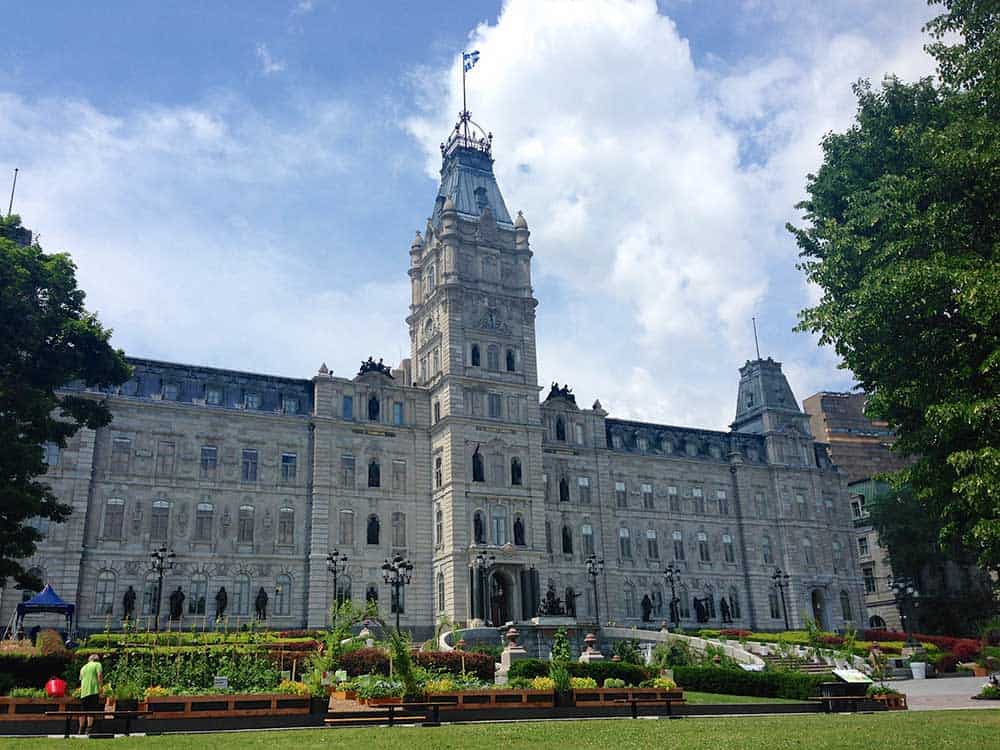 Be sure to stopover at the beautiful Fontaine de Tourny in front of the Parliament Buildings. This water fountain was gifted to the city in 2008 in celebration of Quebec City’s 400th anniversary.

Venture outside of the city walls to the Plains of Abraham and Parc des Champs-de-Bataille (Battlefields Park), Canada’s first National Historic Park. Here in 1759, the British faced the French at the Battle of Quebec and won. If your Quebec City trip falls between June and October, visit at sunset to hear stories about the city and its historical characters.

Watch the changing of the guards at La Citadelle

A walk up the stairs from the Governor’s promenade will take you to America’s largest fort, La Citadelle. To get inside the citadel, you’ll have to take a guided tour. 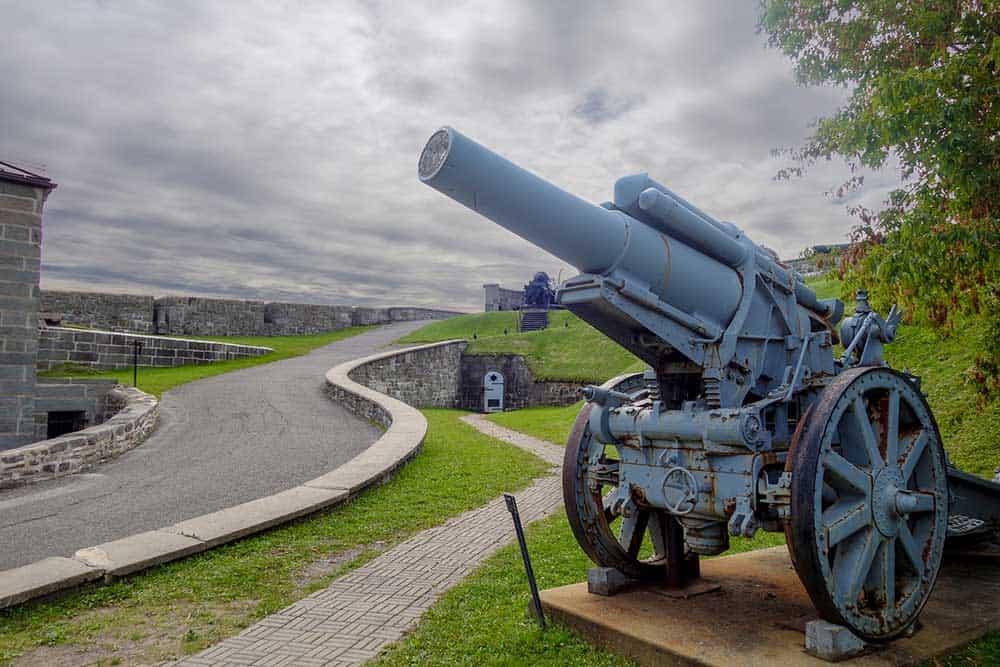 Built in 1800 by the British, La Citadelle is still an operating military base. If you time your visit right in the summer months, you’ll be able to watch the changing of the guards.

Got extra time while checking out Quebec City in 24 hours? Venture out of the city in the afternoon to see Montmorency Falls. To get there, you can take a bus from the train station next to the Old City Hall. It’s just 13 kilometres away. 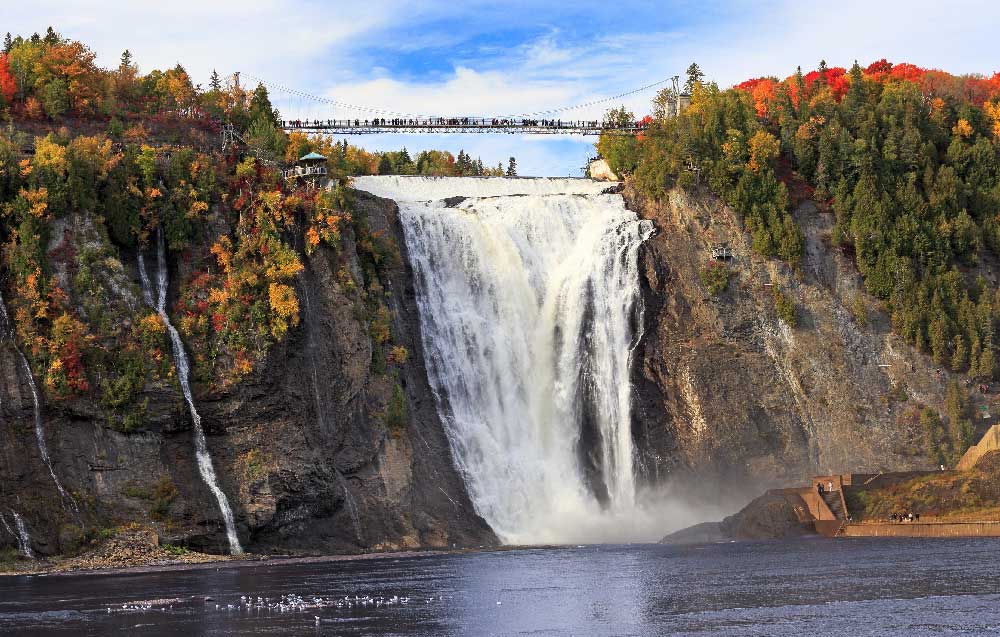 Montmorency Falls is 272 feet tall, which is considerably higher than Niagara Falls. The waterfall tumbles into the Saint Lawrence River below, creating a fine, wet mist.

You can walk, take a cable car, or zipline down past the falls. If you choose to hike, you’ll get to view Montmorency Falls from the suspension bridge above.

End the day with craft beer and live music

Once the sun has set, it’s time to take a peek at Quebec City’s best restaurants, pubs, and clubs. End your Quebec City travel plan enjoying a nice dinner and the city’s best craft beers and cocktails. Look around. You’ll find plenty to do to finish off your tour of Quebec City in one day.

Nightlife options in Quebec City include jazz clubs, symphonies, theatres, and opera houses. There are also micro-breweries, fine-dining restaurants, and nightclubs on offer across the city. They stretch from the banks of St Lawrence to Rue Saint-Jean and Old Town.

Swap in for some indoor fun

One-day itineraries aren’t always that easy to organize. Inclement weather can sometimes upset even the best-laid travel plans. If you’re looking to get out of the rain, Quebec City also has some cool activities and exhibitions on offer. 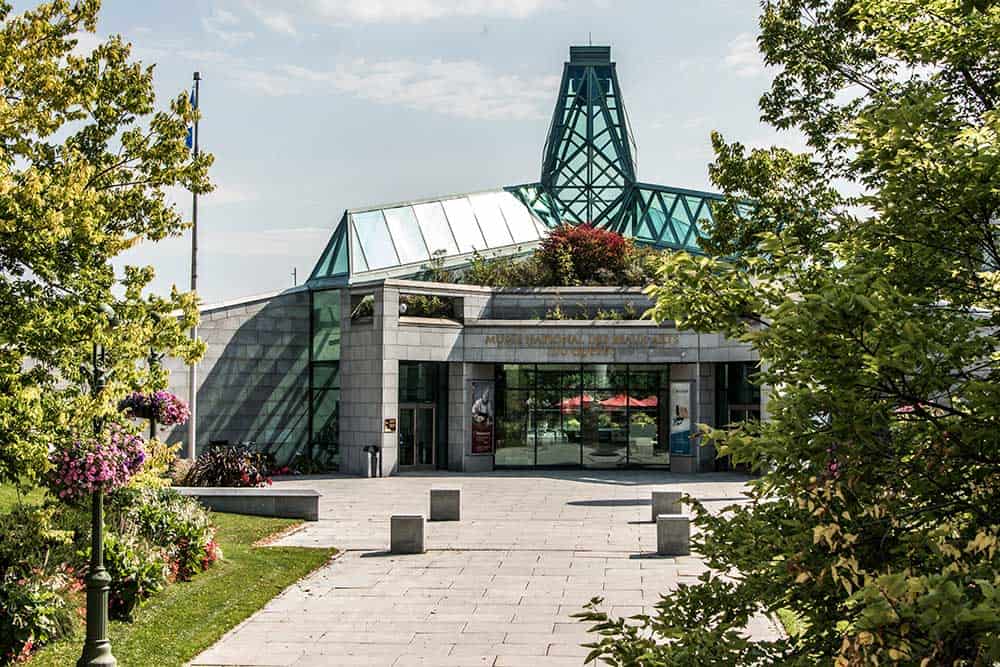 Where to stay in Quebec City in 24 hours

Québec’s capital city is one of Canada’s most popular places to visit. As such, figuring out where to stay in Quebec City isn’t always easy. If you’re visiting on a time-crunch, stick to the city centre. On a quick Quebec City layover, Upper Town and Lower Town are the best places to start your accommodations search.