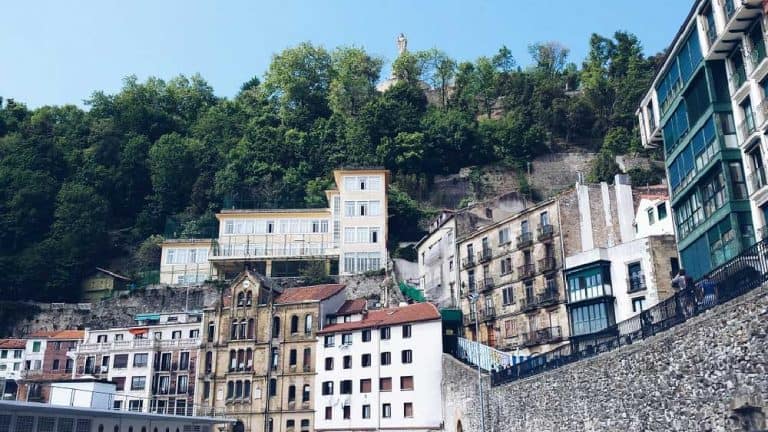 Spending one day in San Sebastian is likely to be one of the highlights of your Spain itinerary. While it’s a shame to only spend 24 hours in San Sebastian, also called Donostia, it’s still plenty of time to cover a lot of ground.

Moving inland from the bayside reveals old city streets, markets, and cafes serving pintxos – a local appetizer. From the busy beaches to the crowded streets of Parte Vieja, San Sebastian packs a lot into a small area, which also makes it easy to explore.

What to do in San Sebastian in 24 hours: A complete 1-day itinerary

Seeing San Sebastian in 24 hours is going to involve a lot of walking. You’ll get to visit the beaches and bayside commercial district, venture into the heart of the city, and climb a hill to take in stunning views.

Like most of our city itineraries, this trip to San Sebastian (Donostia) includes a little bit of everything. You’ll spend time watching sharks and stingrays in the city aquarium and visit old churches. 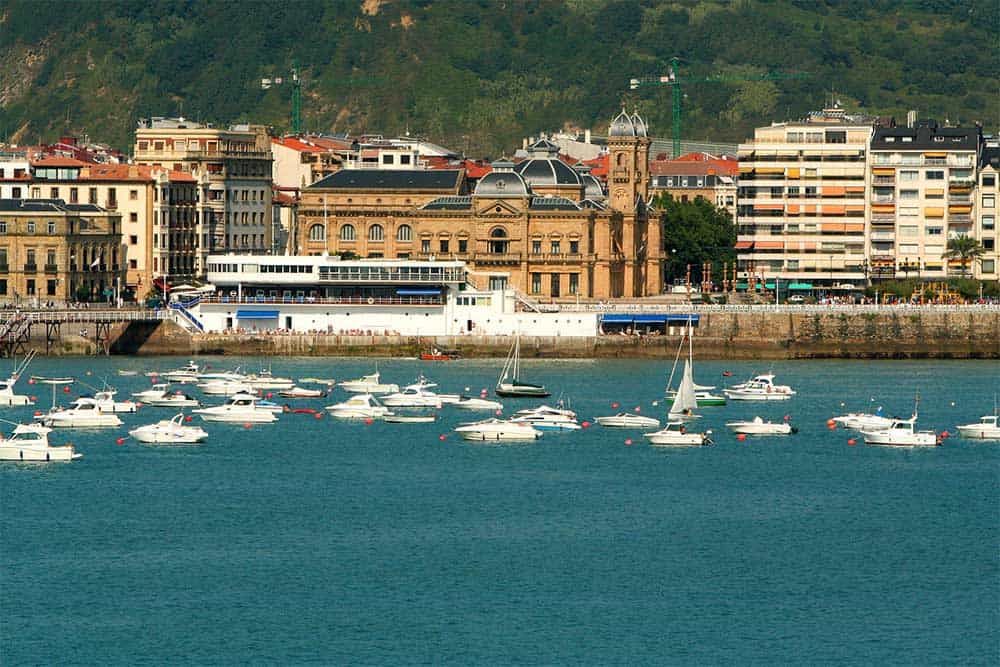 Don’t worry about food, as there’s a café or restaurant around almost every corner. If you want to see as much of the city as possible, use this guide to San Sebastian in one day.

Preparing for your San Sebastian itinerary? Don’t forget to protect yourself with travel insurance!

One of the largest and oldest city parks in the region, Cristina Enea Park is a delightful spot to spend an afternoon. It’s also a great place to start your 24 hours in San Sebastian, as it’s on the eastern edge of the city. 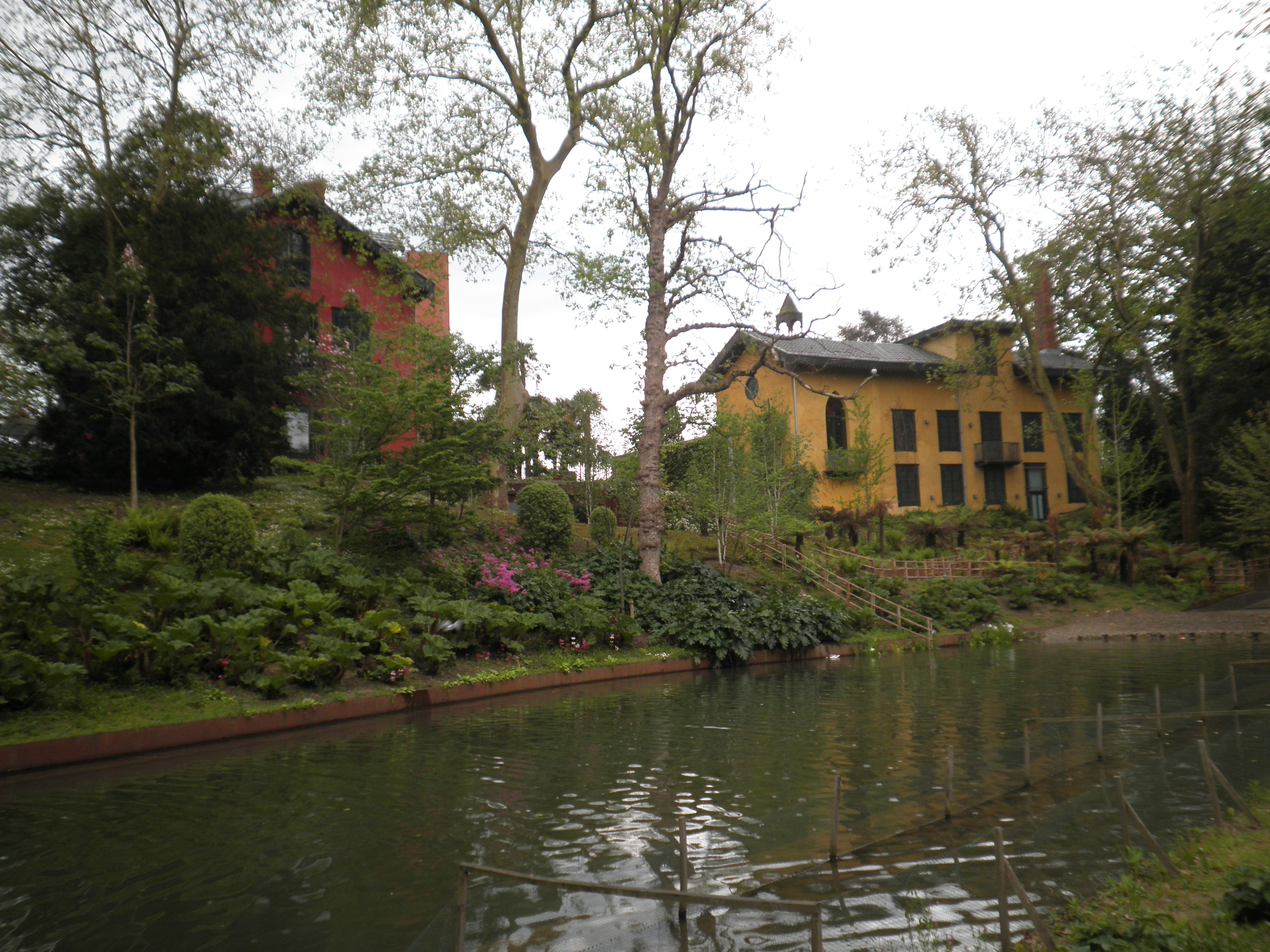 The park is expansive, with lots of paths to walk along. The scenery varies from dense woods to open fields with peacocks, ducks, and other wildlife wandering the grounds. There are small ponds, native plants, and lots of areas to stop and rest.

While the park doesn’t have any special attractions, the natural beauty of the outdoors is always refreshing. You may even get to see flamingos strutting about or find a vendor serving gelato.

PRO TIP: Want to make the most out of your one day in San Sebastian? Start the day off right with the San Sebastian Walking Tour! This interesting two-hour walking tour whisks you through Old Town and includes a traditional pinxto lunch.

Continue your Donostia itinerary, by exiting the west side of the park near the Urumea River. To your north, you should see an ancient bridge. The Puente Maria Cristina takes you over the river and is almost an attraction itself.

The historic bridge features several detailed statues and provides a great view up and down the river. After crossing the bridge, you’ll find yourself in Parte Vieja, the older part of San Sebastian.

You’ll also be able to see the top of the tower at San Sebastian Cathedral, an important destination for any San Sebastian itinerary. 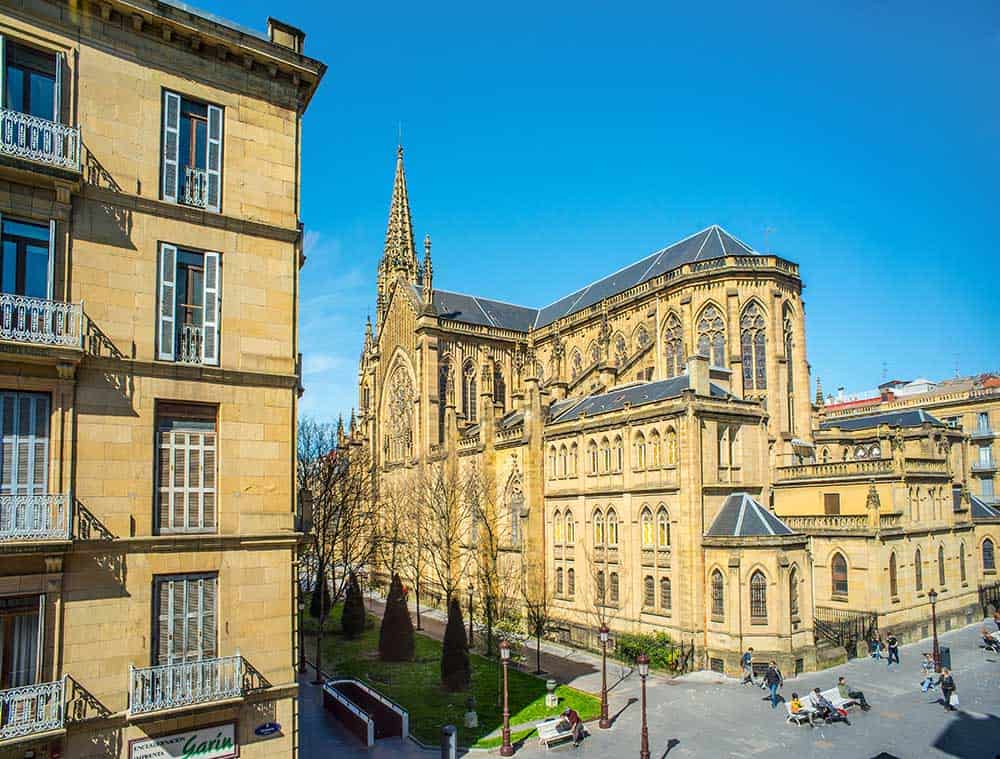 Also called Cathedral of the Good Shepherd (Catedral del Buen Pastor de San Sebastián in Spanish), the cathedral isn’t ancient. It was built at the end of the 19th century, but it features a neo-gothic style that was popular a couple of hundred years earlier.

Besides a tower reaching into the sky, the exterior of the grand cathedral features intricate carvings, statues, and reliefs cut into the façade. It’s a striking building to behold and even more impressive when you get inside.

As a major attraction, the cathedral tends to get crowded. Luckily, you’re visiting it early in the day before the lines into the cathedral get too long.

The cathedral houses priceless artwork, rare artifacts, and exhibits dedicated to the history of San Sebastian. You can take a guided tour or explore the exhibits on your own.

When you’re done, if you’re in need of a snack or some caffeine, take time to explore some of the cafes and shops in the plaza in front of the cathedral before continuing your one day in San Sebastian.

PRO TIP: Want to see more of San Sebastian in a day? Join in on the San Sebastian E-Bike Tour! This 2.5-hour tour cycles among the city’s oldest and most authentic neighbourhoods and catches lovely seabreezes as you trail along the coastal bike bath.

Stroll along the crowded white sands of La Concha

From the cathedral, it’s just a short walk to the beach. Take any of the streets west and you’ll eventually reach the bay.

La Concha is one of the main beaches in San Sebastian, luring people from all over. The clear waters and sparkling sand are often filled with locals and tourists. 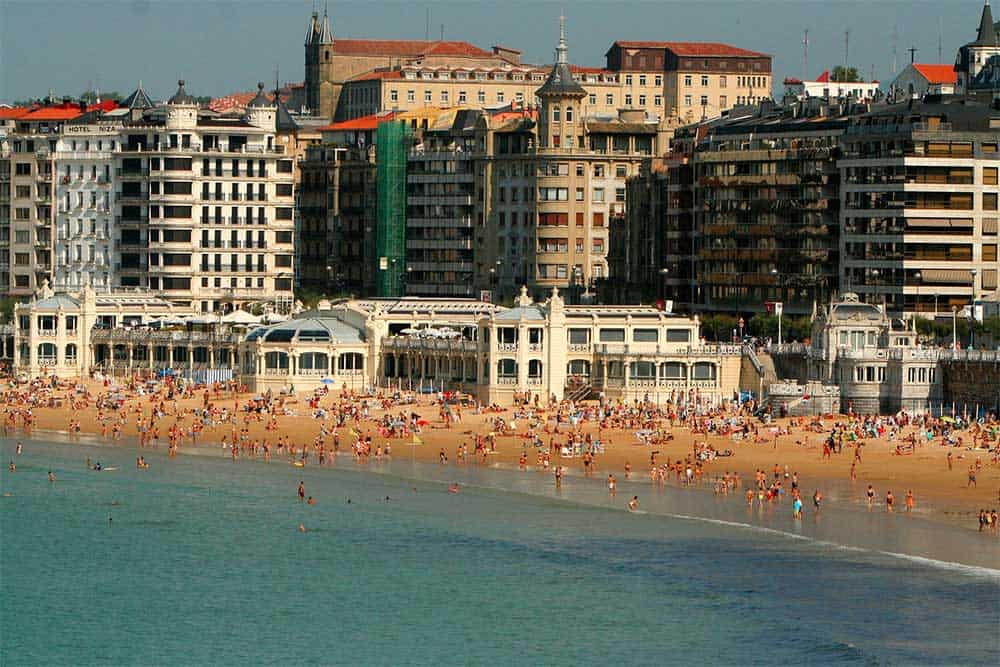 The beachside area includes a promenade that stretches for over a kilometre and is filled with cafes and tapas bars. While the beach is typically packed, it’s surprisingly well kept. Unfortunately, you may not be able to go for a swim during this trip.

With just 24 hours in San Sebastian, you don’t have a lot of time for excursions. While it’s easy to spend your entire day in San Sebastian at the beach, you also need to get some food and explore a few other sites.

Continue your stroll north along the beach, working your way around the curve of the bay. When you reach the end of the beach, start walking toward the centre of Parte Vieja. In the middle of the old neighbourhood, you’ll find Constitution Square.

Much like many European cities, San Sebastian has several large public squares that tend to serve as the centre of festivities. Constitution Square is the largest of these squares in San Sebastian and the heart of Parte Vieja. 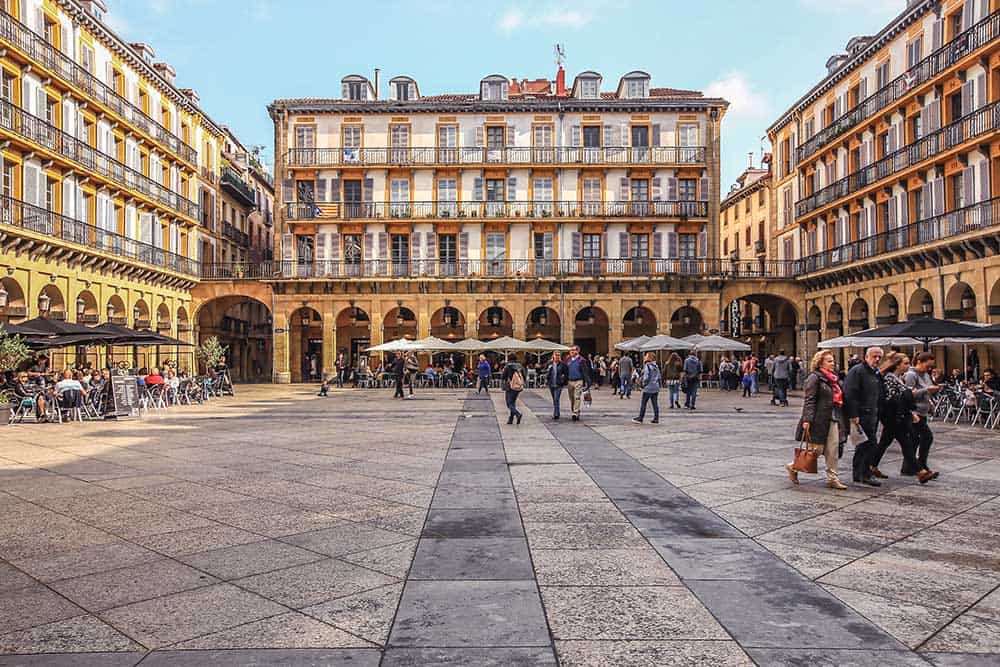 The main reason to visit the plaza is for the cafes and terraced bars serving pintxos. Pintxos is a local staple, San Sebastian’s version of tapas. Like tapas, pintxos is an appetizer. It’s typically a bread covered with melted cheese and other ingredients.

Many of the cafes, bars, and restaurants surrounding the square try to top each other, resulting in innovative appetizers that you are unlikely to find anywhere else in the world.

If you don’t like cheese, there are plenty of five-star restaurants in the area. Just keep in mind that trying to get a spot in a restaurant could take up a large chunk of your time while visiting San Sebastian in one day.

PRO TIP: Mouth watering at the thought of San Sebastian’s culinary scene? Get the most out of your Basque Country tasting experience on a San Sebastian Culture & Food Tour! The 2.5- to 3-hour tour includes tastings of 3 local glasses of wine and 6 pintxos (local tapas-like snacks).

Mingle with the marine life at the city aquarium

After fuelling your body with appetizers or a meal, continue your San Sebastian itinerary walking off the food as you travel to the aquarium.

Besides ducks and peacocks found in the park, the city houses marine life. The city aquarium is one of the top things to do in San Sebastian, thanks to the variety of species and the maritime history lessons. 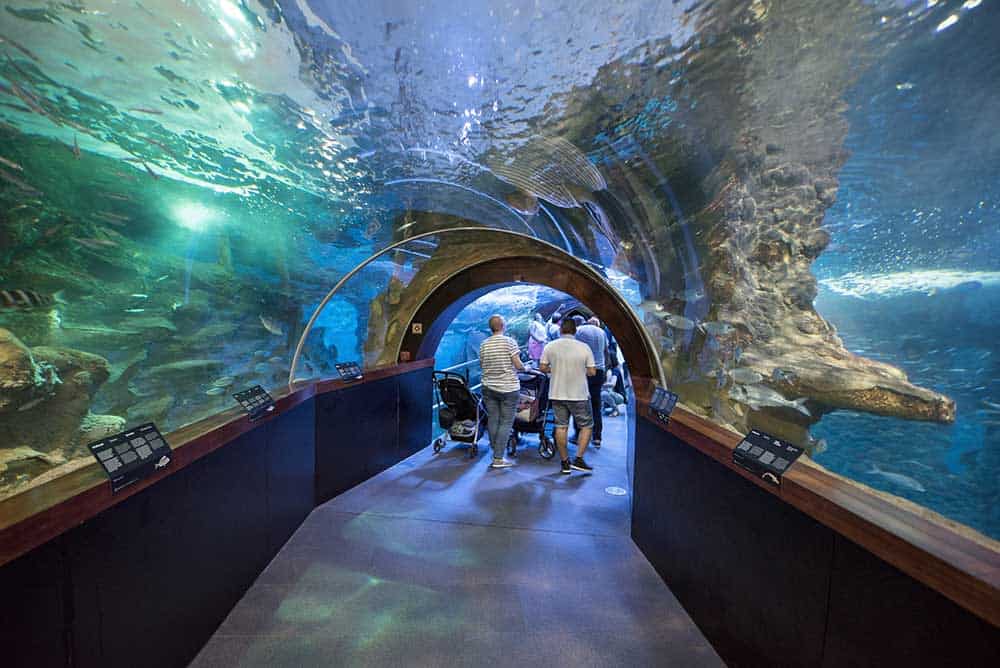 A trip to the aquarium starts on the top floor, housing a variety of exhibits showcasing the history of the region. You can learn all about the fishing and whaling industries that helped San Sebastian become a prominent city.

The lower floors include the aquariums housing over 200 species of marine life. Watch turtles, stingrays, sharks, and all types of big and small fish swimming about.

In the centre of the aquarium is a massive whale skeleton, another reminder of the whaling history of the city. However, the best part of a trip to the aquarium is walking through the 360-degree underwater tunnel.

The tunnel takes you through one of the aquarium tanks, allowing you to watch sharks swim by in every direction. This is another attraction where you could easily spend the entire day, as there is so much to see and do.

PRO TIP: Want to save your feet while touring San Sebastian? Grab a ticket for the San Sebastian Hop-On Hop-Off Sightseeing Bus!

The castle is part way up the hill. It takes about 20 minutes to climb the stairs, providing views of the beach between sections of shaded trees. Along the way, you’ll also pass a couple of other old ruins. 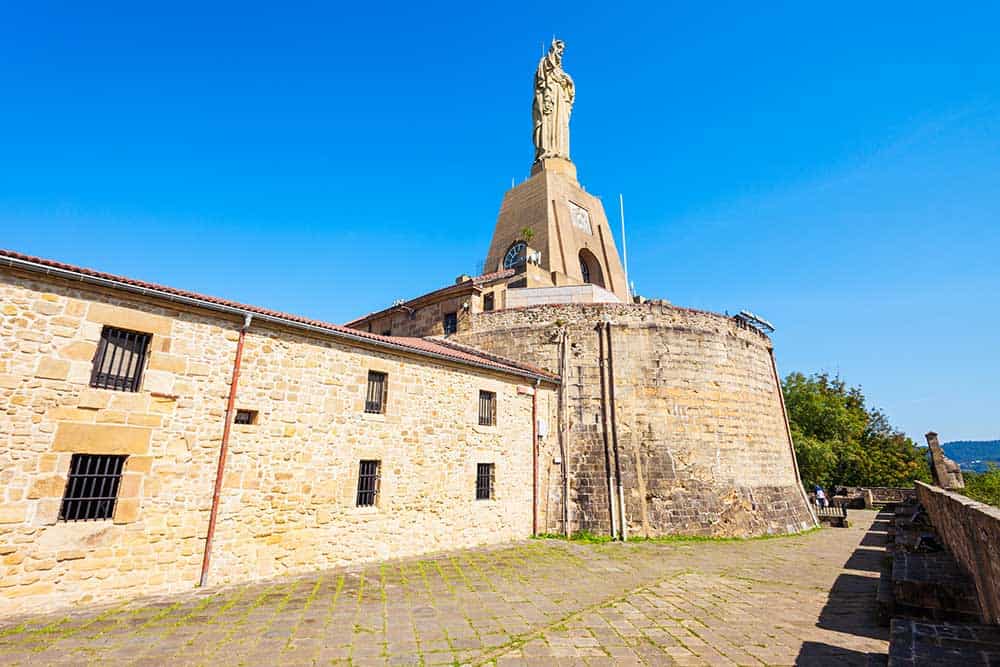 Unfortunately, you can’t tour the inside of the fort, but you can walk along the outer ramparts and see some of the cannons that point out toward the bay. There are also various walkways and courtyards to explore, along with spots to stop and rest or enjoy a picnic.

PRO TIP: Interested in digging deeper into the history of San Sebastian? Join a professional guide and see the exact sites you want to on a San Sebastian Private Historic & Cultural Walking Tour!

Hike Mount Urgull for the best views of the city

The old fort is just part of your journey up Mount Urgull. You can see the tree-covered hill from other parts of San Sebastian, as it sits at the end of the bay. The hill provides endless hiking trails and dense foliage, but the real treat is found at the top.

The path to the top isn’t the easiest trek. Some areas are paved while others are barely cleared of foliage. 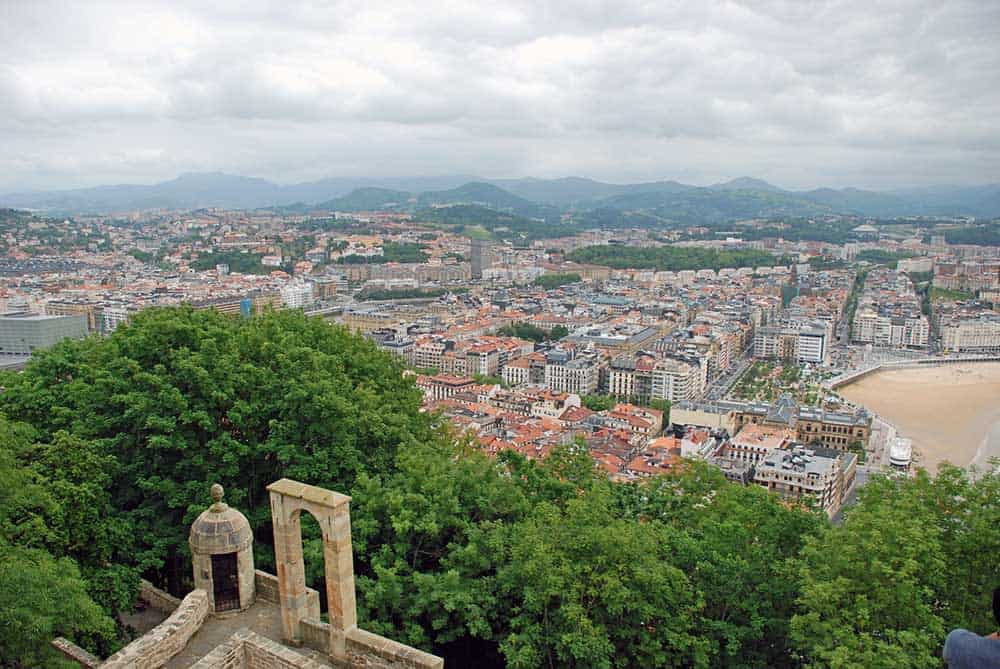 When you get to the top, you can look out over the city and all the places that you visited during your one-day San Sebastian itinerary. You’ve gotten to explore most of the main attractions, but hopefully, you’ll come again and really take the time to immerse yourself in the culture, beaches, and pintxos.

If you’ve made good time, it may still be earlier enough to head back down into Donostia.

For those that like the nightlife, head to the beachside area, where you’ll find throngs of tourists crowding into the bars. If you want something a little more relaxed, stay in the city centre and find a quiet café for a well-deserved nightcap.

PRO TIP: Want some company on your hike? Join in on the small-group Urgull Hill Hiking & Sightseeing Tour and experience some of the best views in San Sebastian with some new friends!

Where to stay: The best hotels for 24 hours in San Sebastian

When you’re tight for time, picking where to stay in San Sebastian can be surprisingly easy. With only one day in Donostia, you’ll want to choose accommodations as close as possible to the main tourist attractions. Here are a few ideas to start your search…