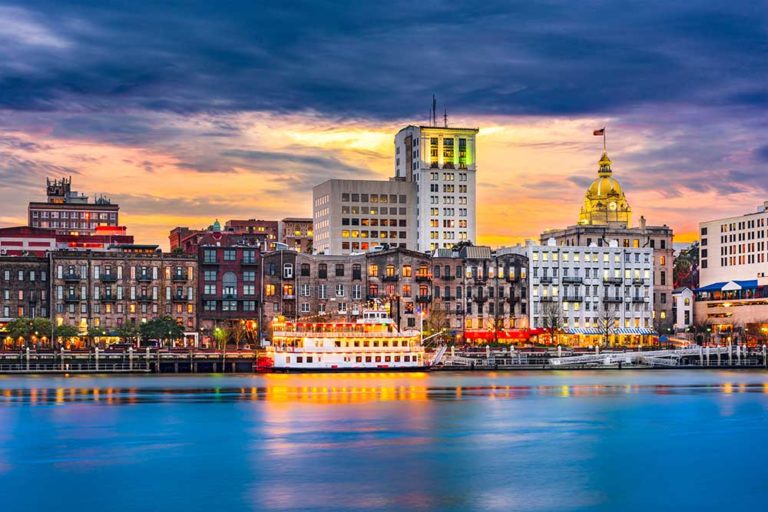 Planning the ultimate road trip in the Southeast USA? Be sure to carve out at least one day in Savannah, Georgia. The leafy and historic city of Savannah is one of the South’s biggest surprises. Georgia’s second-biggest city is every bit as charming & hospitable as its nickname “The Hostess City of the South” implies.

You’ll have no problem filling out your first 24 hours in Savannah. The difficulty lies more in knowing what to leave out. On this 1-day Savannah itinerary, you’ll spend much of your time roaming around the Savannah Historic District. The area sprawls several blocks south of the Savannah River. Along its cobblestone streets lie most of the city’s top attractions. You’ll stumble upon historic houses, beautiful city squares, and museums. You’ll also get to explore Savannah’s burgeoning culinary scene.

Ready to figure out where to go in Savannah in one day? Get started with this complete 1-day Savannah trip plan.

Looking for more ideas for your trip? Check out our other city itineraries and our United States Travel Guide and Georgia Travel Guide for more recommendations on when to visit, where to go & what to do!

Where to go in Savannah in one day: A complete 1-day itinerary

Looking for a quiet start to your one day in Savannah? Set your sights on Forsyth Park. The massive 30-acre park sits on the southern edge of Savannah’s Historic District. 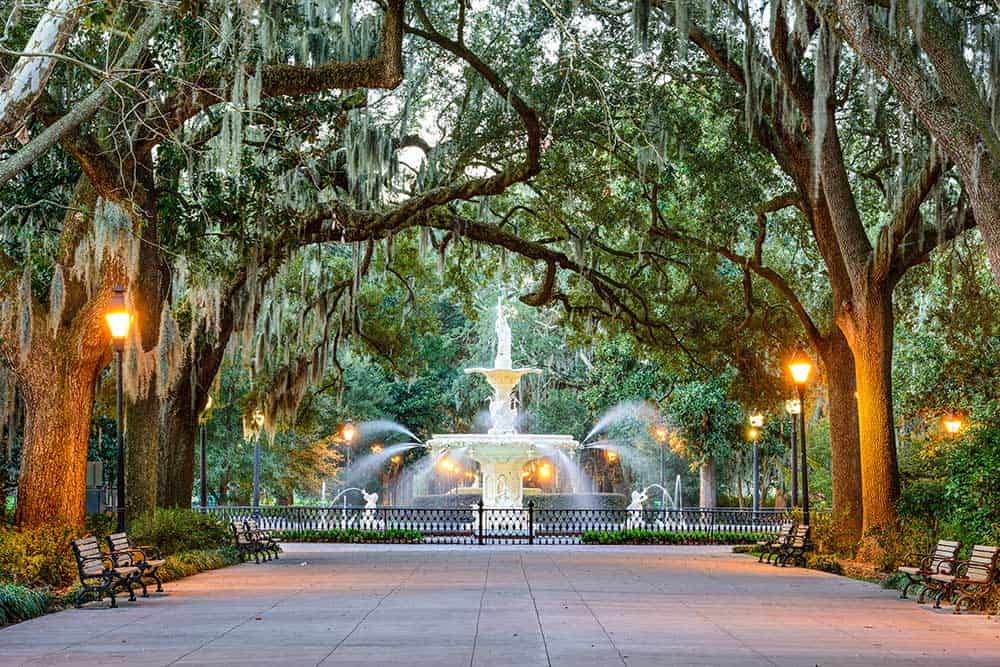 Besides the relaxing pathways, the most interesting feature at the park is its iconic fountain. Built in 1858, the glorious fountain resembles those at Place de la Concorde in Paris. It’s often ringed by artists and street performers looking to catch the eyes of locals & visitors.

Before heading into Forsyth Park, grab a coffee to go at The Sentient Bean. The popular local café offers a superb selection of fair-trade coffee to fuel your day.

From Forsyth Park, continue your first 24 hours in Savannah with a walk north along Bull Street. When you hit Madison, swing two blocks east. You’ll end up at Lafayette Square, one of the 22 historic squares on the 18th-century original city plan.

Lafayette Square is famous for its glorious fountain and the historical buildings surrounding it. Next to the square, you’ll find the Cathedral Basilica of St. John the Baptist. It’s one of the city’s most beautiful churches. It’s worth a peek if you’ve got time on your 24-hour Savannah itinerary. 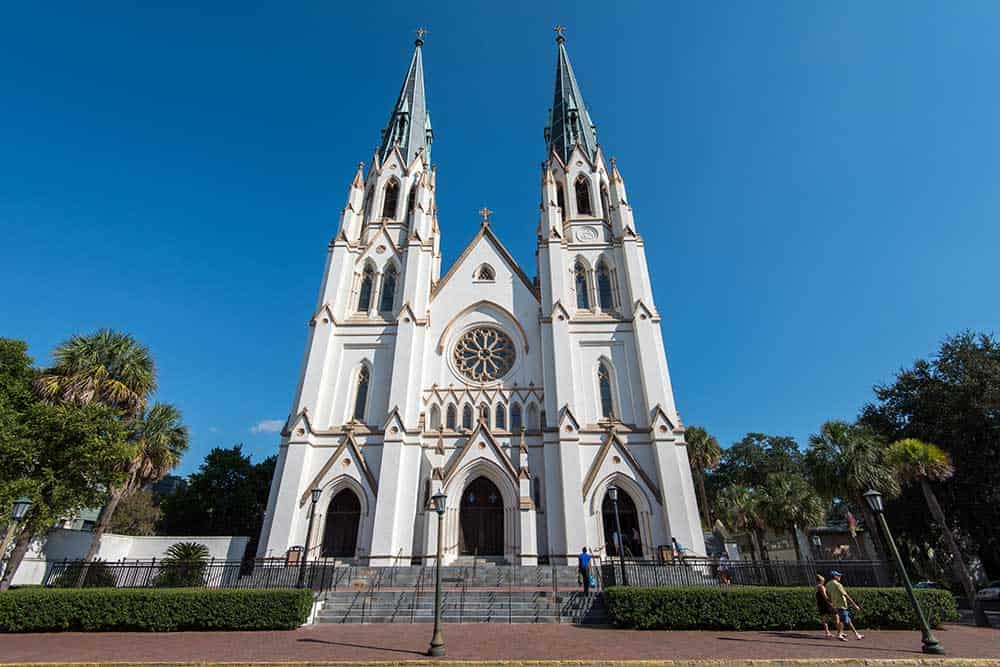 Andrew Low House, a favorite stop on Savannah ghost tours, also sits on the western edge of the square. The 200-year-old house is reputed to be haunted. Even if the paranormal doesn’t interest you, Andrew Low House is worth checking out for its historical value.

Bookworms can also visit the Flannery O’Connor Childhood Home. The house sits on the southeastern tip of the square. Take a guided tour to learn more about the famed Southern Gothic American author. 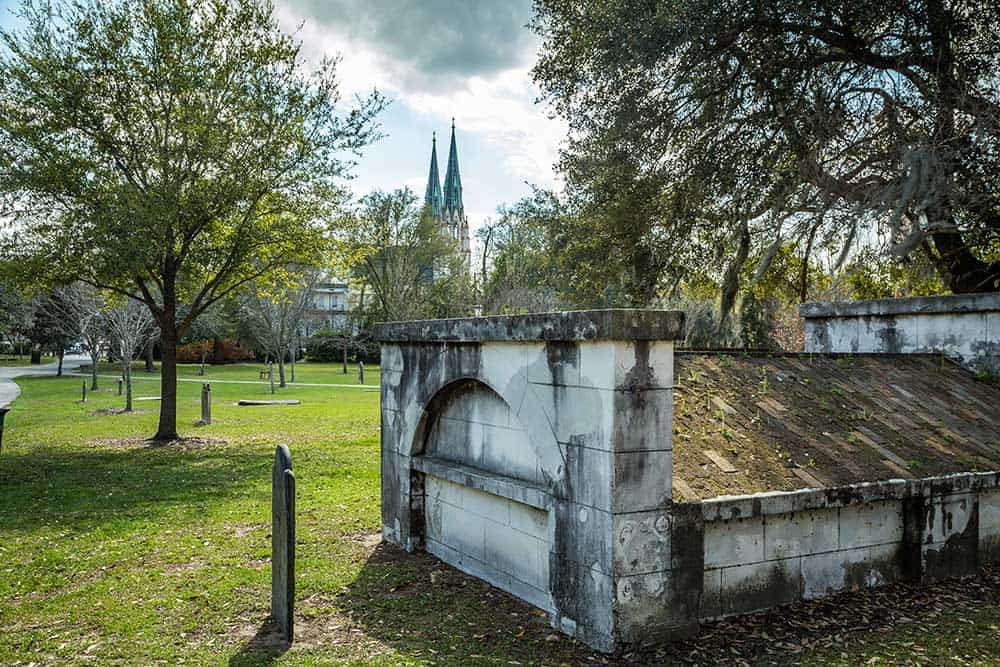 Several notable locals are buried at the cemetery. The most famous is Button Gwinnett, one of the signers of the Declaration of Independence. If you’re interested in early American history, be sure to take a stroll around this 6-acre park.

From the cemetery, walk east two blocks. Continue your tour of Savannah in 24 hours at Chippewa Square. Dating back to the early-19th century, this spectacular square sits near the center of the Historic District. It’s wedged between Bull Street, Hull, and W Perry. The square commemorates the Battle of Chippewa during the War of 1812. 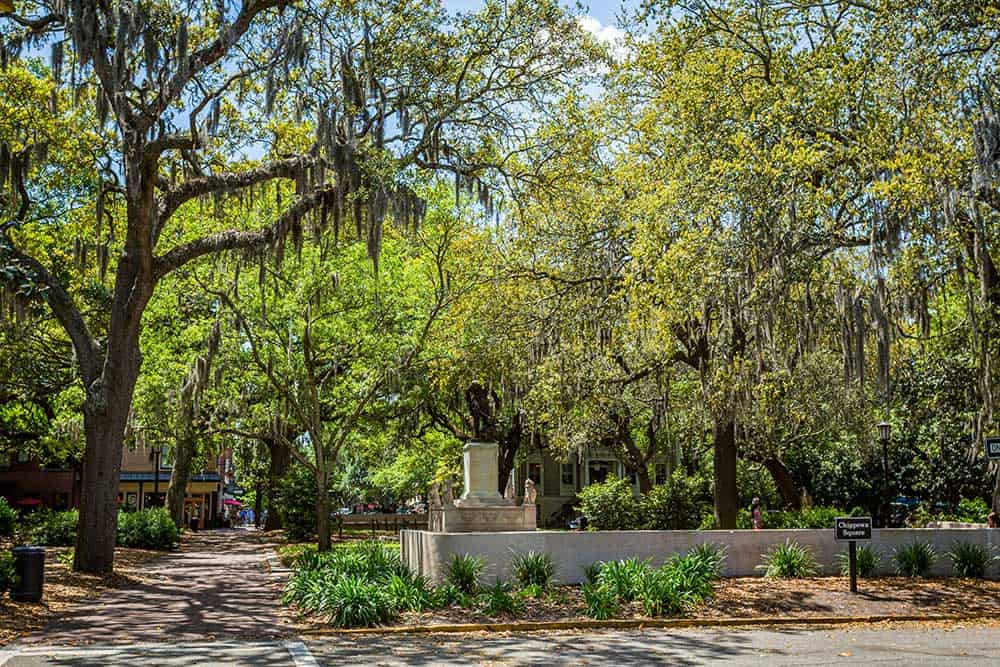 Chippewa Square centers around a spectacular nine-foot statue of General James Oglethorpe. Around it, you’ll enjoy a shaded canopy of mature trees and a garden.

If you’re a film buff with a keen eye, you might recognize the park from the movie Forrest Gump. Chippewa Square was the backdrop as Forrest narrated his life story to passers-by from a bus bench. (You can see one of the benches used in the film at the nearby Savannah History Museum.)

Savannah’s historic houses are among the best places to visit in Savannah. One of the most interesting is the Owens-Thomas House & Slave Quarters. The museum is less than a 10-minute walk northeast of Chippewa Square.

Built in 1819 in English Regency style, the Owens-Thomas House dates back over 200 years. Today, the home still remains one of the finest examples of the Regency architectural style in the United States. 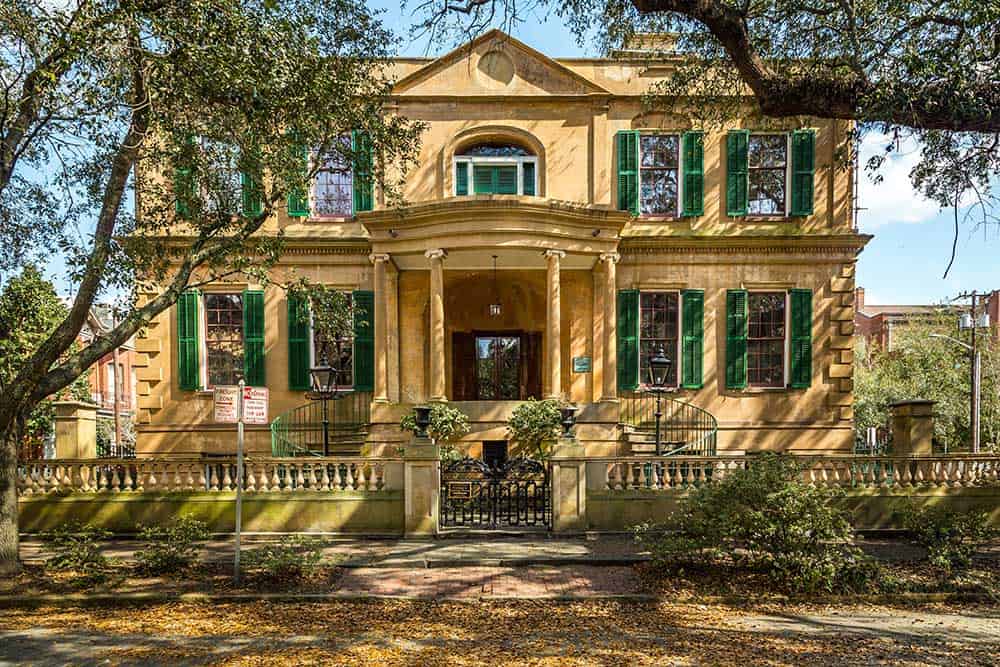 Hop onto a guided tour of the home to explore its historic rooms. They’re jam-packed with interesting art & architectural pieces along with interactive exhibits.

Outside the main house, explore the carriage houses and the beautiful Parterre Garden. Save time for a tour of the Slave Quarters to get a more well-rounded history of the home.

Cool down at Leopold’s Ice Cream

The Georgia heat got you down? Before continuing your 1-day Savannah itinerary, pop into Leopold’s Ice Cream. Located a block north of the Owens-Thomas House, Leopold’s is one the oldest ice cream parlors in the United States. (It’s even been voted as one of the best in the world!)

Brave the line-up and give it a lick to see what all the fuss is about.

Need a break from Savannah’s history? Walk a few blocks northwest to the City Market. Open since the 1700s, the open-air market spans four blocks between Franklin Square and Ellis Square. 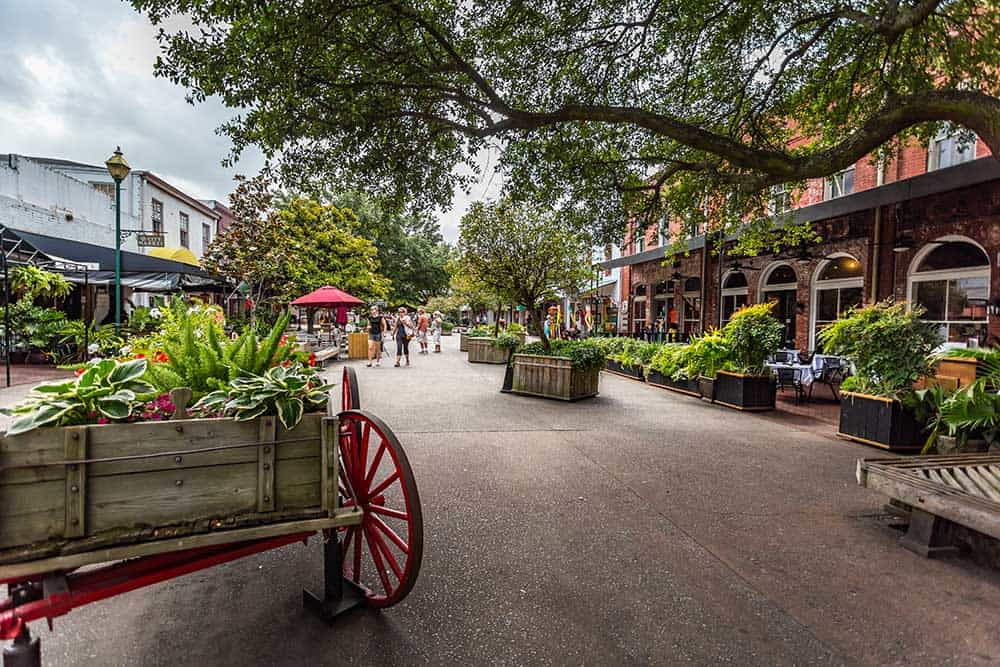 At City Market, you’ll find a barrage of vendors peddling everything from handicrafts to artwork. The square is also surrounded by several art galleries, restaurants, and bistros.

Built up an appetite? City Market is the perfect place to stop for a bite with a side of people-watching. For quick pub food, pull up a chair at the Café at City Market or at the unfortunately-named Wet Willie’s. Want a more upscale lunch? Chow down on seafood & steak at award-winning Belford’s Savannah.

From the market, it’s a few blocks north to River Street. The popular avenue runs along the historic Savannah riverfront. For visitors, River Street is one of the most interesting areas in the Historic District. 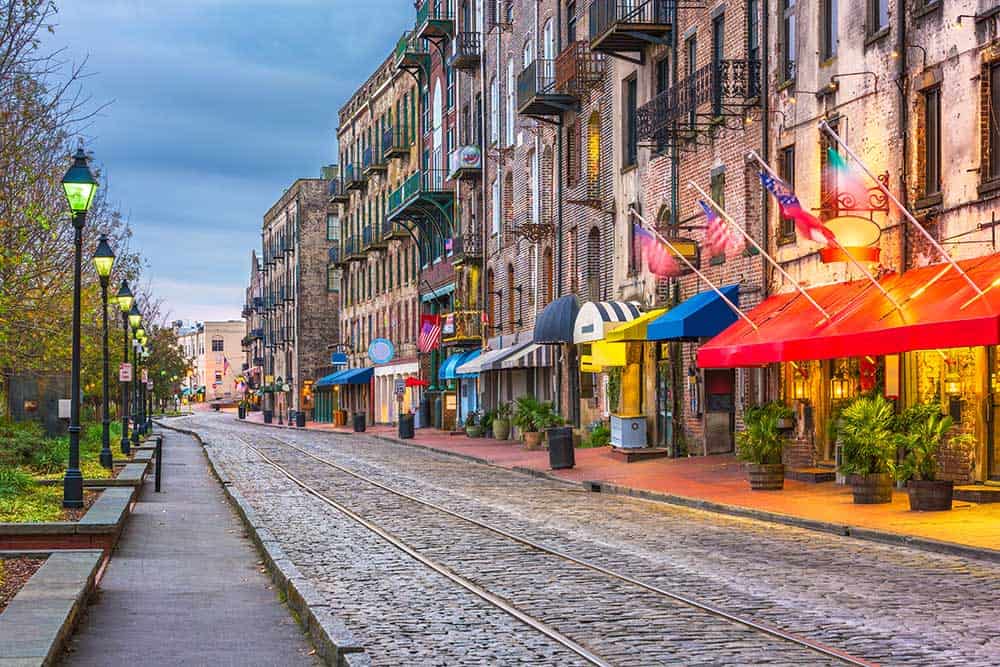 Many of the historic buildings along the waterfront and River Street were once warehouses connected to the cotton trade. Since their heyday, they’ve been renovated and restored. Today, they house some of the coolest hotels, galleries, and restaurants in Savannah.

As you stroll along River Street, weave into its boutiques to do a little casual shopping. The area is also home to plenty of cafés and pubs. It’s a great place to stop for a sip and enjoy fantastic views over the Savannah River. Nearby Bay Street also has an excellent selection of bars & restaurants to choose from.

Got a sweet tooth? Be sure to pop into River Street Sweets. Its signature pralines are a crave-worthy Southern delight.

To explore the riverfront to its fullest, carve two hours in your evening for a Savannah Riverboat Cruise. Hop aboard the historic Georgia Queen for a relaxing sunset cruise you won’t soon regret. 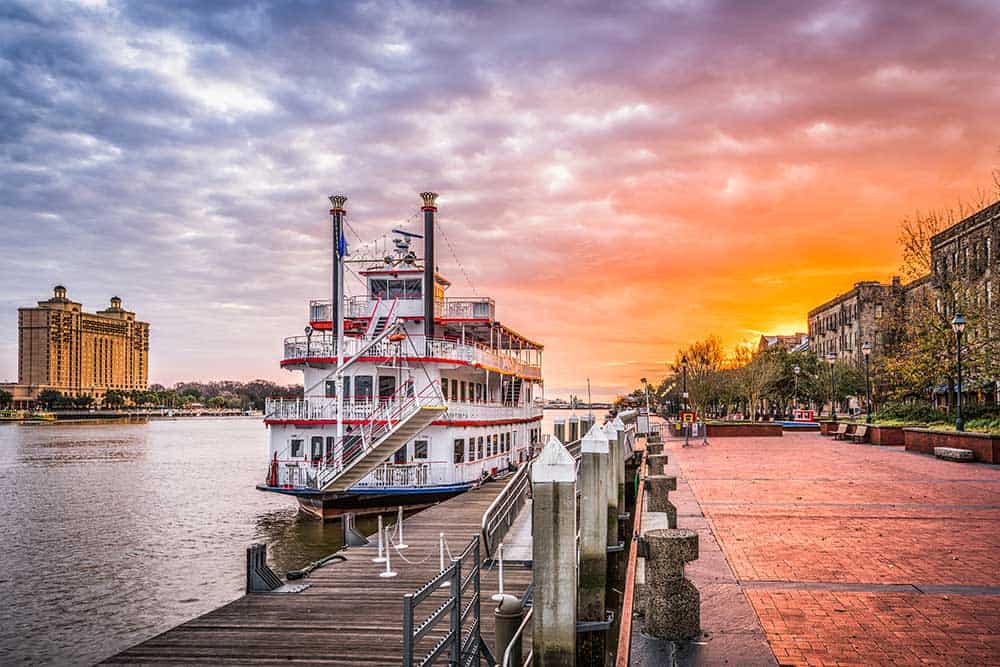 On the cruise, you’ll enjoy the refreshing river breeze as you watch the sun dip below the city from the open-air deck. Grab a drink from the onboard Skyline Bar and Grill. Float by the city sights to the sounds of live music, recreating a 1950s-era Southern vibe.

Back on shore, head back into the Historic District to enjoy a delicious dinner. There’s a wide selection of restaurants & gastropubs to choose from. You’ll find a variety of great choices at every price range along River Street and Bay Street. 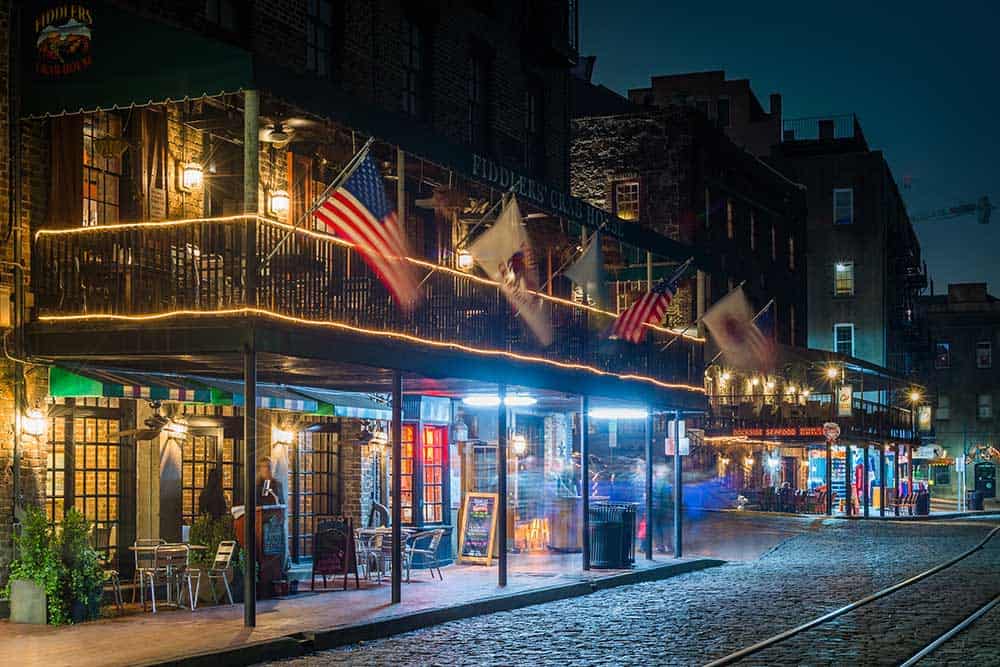 Another option is to head down to Starland District south of the historic center. Not long ago the neighborhood was a no-go zone for visitors. In the last decade, Starland has cleaned up its act. Today, it’s one of the hippest up-and-coming neighborhoods in central Savannah.

Starland District is jammed with cool cafés, restaurants, vintage shops, and craft breweries. Grab some Southern comfort food at the food trucks around Starland Yard. Or sip on craft beer at the popular Two Tides Brewing Company. (For safety at night, use a taxi to travel to & from Starland.)

PRO TIP: Savannah is often listed as one of America’s most haunted cities. Add a little creepiness to your evening with the Savannah Haunted History and Ghosts Walking Tour. The ghost tour visits 8 locations. Stops include Kehoe House, Davenport House, The Juliette Gordon Low House, and The Cursed Wright Square.

Where to stay with 24 hours in Savannah

For first-time visitors, the best area to stay in Savannah is the Historic District. You’ll find hotels & accommodations in all price ranges, from budget to luxury. 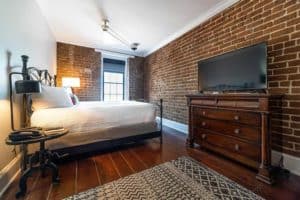 Located on the waterfront, this historic inn is the perfect choice for your adventure. The rooms here are charming and show off both modern and turn-of-the-century motifs. The hotel’s daily wine and hors d’oeuvres reception is classy & fun for guests. 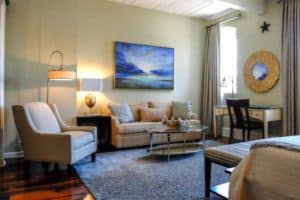 This historic riverfront inn dates back to 1812. Rooms are spacious and surprisingly modern given the hotel’s heritage façade. Like other top hotels in the area, the inn hosts a nightly wine & cheese event. 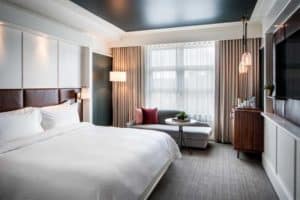 For a luxury stay in Savannah, this 5-star hotel is a gem. The rooms are stunning & modern, but amenities like the elegant outdoor pool push this property ahead of the pack. 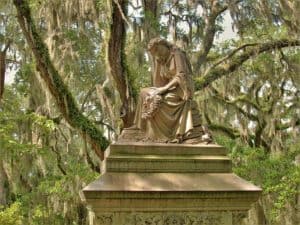 The famous 160-acre Bonaventure Cemetery is a little too far outside the city center to visit on a time-crunch. The cemetery is known for its spectacular Victorian monuments and its appearance in the movie Midnight in the Garden of Good and Evil. 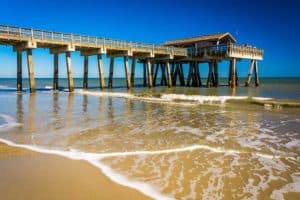 Got a day to spare? Start it off with a trip to Tybee Island. Located about 30 minutes east of the center, this barrier island is known for its military fort, museums, and some of the top beaches around Savannah. History buffs will love the 19th-century Fort Screven.

When to visit Savannah

The best time to visit Savannah is between March and June. In these spring and early summer months, the weather in Savannah is at its best. With the warmer weather returning, the city’s trees and flowers spring back into bloom. Visiting at this time of year, you’ll enjoy Savannah at its most colorful. 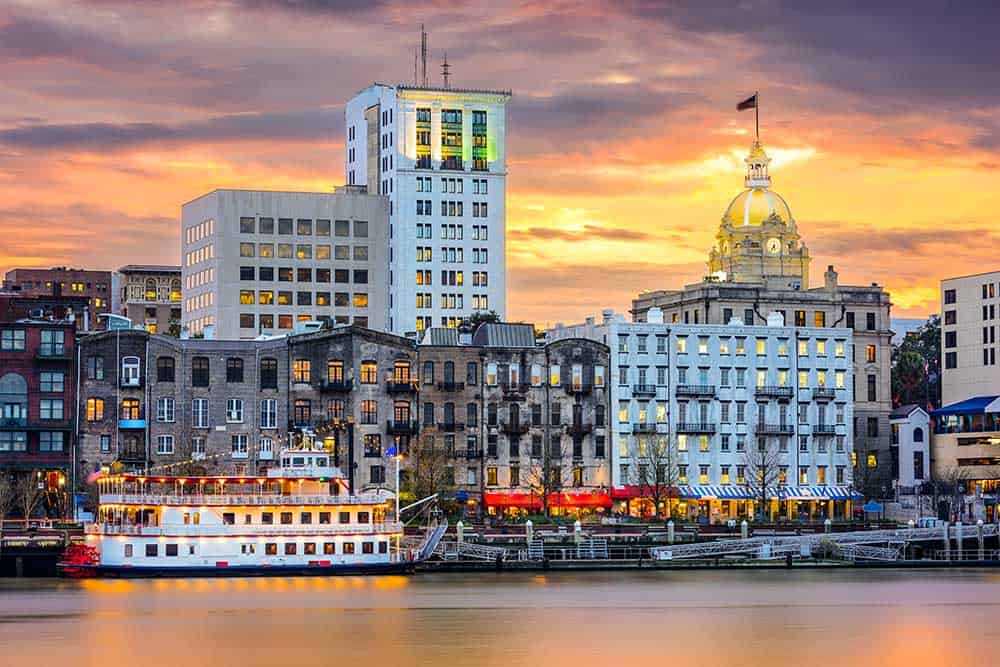 The high season in Savannah falls in its summer months during the school holidays. Not only are prices higher, but July and August are also uncomfortably hot & wet in Savannah. You’ll do your best to avoid visiting at this time of year.

Winter is the cheapest time of year to travel to Savannah, but also the coolest. In winter, temperatures can dip as low as 30ºF (3ºC). If you don’t mind bundling up, you can find some fantastic accommodation deals at this time of year.

How to get to Savannah

Savannah is served by Savannah/Hilton Head International Airport (SAV). The airport is located 8 miles (13 km) northwest of the city center. Several major airlines fly into SAV from destinations around the United States, including:

Savannah is well-connected by road to other major cities in the Southeast. Popular routes and estimated driving times include: