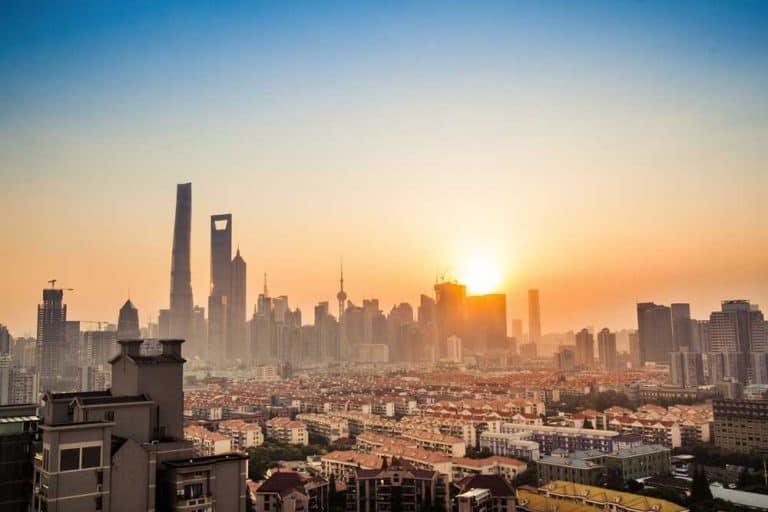 If you’re dreaming of visiting China, don’t even think about leaving without spending at least one day in Shanghai. Although Shanghai is often overshadowed by the more obvious cultural treasures of Beijing, there’s a ton to keep travellers busy in China’s biggest city.

Whether you’re mesmerized by the old colonial grace of The Bund, the space-age skyline of Lujiazui or the traditional Chinese flair of Yuyuan Garden, spending 24 hours in Shanghai checks off all the boxes for an unforgettable modern Chinese urban experience.

Not sure what to do in Shanghai in one day? Plan your trip with this complete 1-day Shanghai itinerary…

What to do in Shanghai in 24 hours: A complete itinerary

So, you’ve set yourself up quite the challenge, eh? Visiting any city on a time-crunch is difficult. Even more so when that city is Shanghai.

Over 24 million people call the Shanghai area home, and as you can imagine, that means that all of the best things to do in Shanghai are spread far and wide. 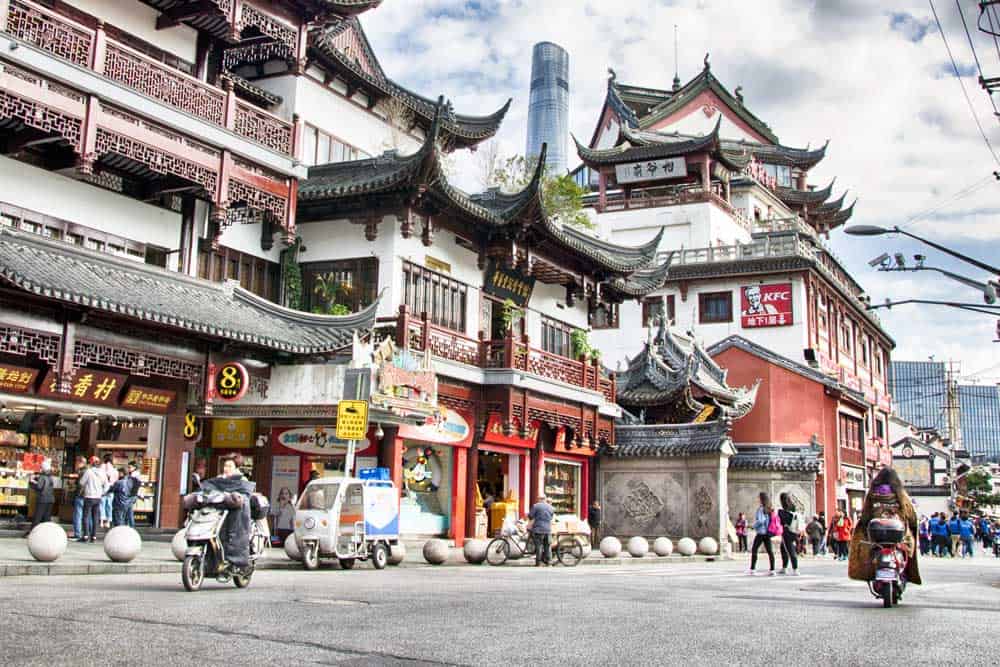 Even so, there’s a ton you can see in Shanghai in one day. Shanghai is a surprisingly walkable city, even if the courtesy of drivers isn’t quite what you’re used to. Reaching many of the top spots on this Shanghai itinerary by foot isn’t so hard if you’re willing to rack up a couple miles with your walking shoes.

When all else fails, the trusty public transportation system makes it easy to get around Shanghai and save you time and energy.

If you’re coming in from the airport, the Shanghai Maglev & Metro Pass is a great value giving you two one-way tickets to/from the airport on the speedy maglev train along with a 24-hour metro pass for just 85 yuan ($13.41).

Let’s see what Shanghai has in store for you…

Preparing for your Shanghai itinerary? Don’t forget to protect yourself with travel insurance!

Breathe in the views at The Bund

I can hardly think of a more perfect place to start your first day in Shanghai than the city’s most iconic stretch, The Bund. Perched on the banks of the Huangpu River, this lovely boardwalk area (at least on the western side of the river) feels almost as much like China as London does. 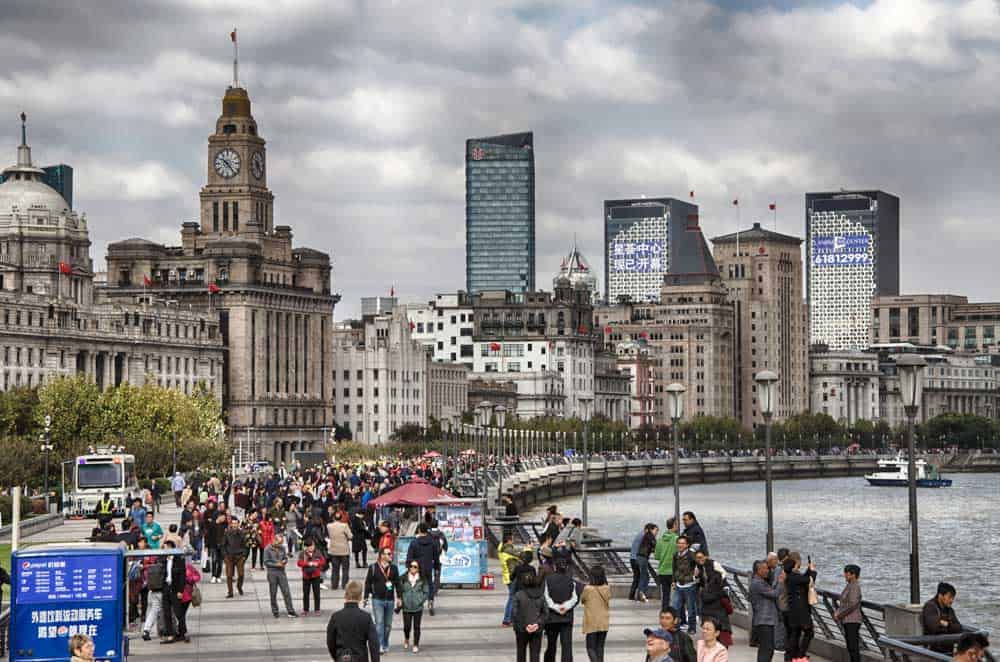 When major European powers settled in Shanghai after the Opium War, many opened up shop along The Bund, constructing their buildings in various major Western architecture styles. Along the stretch, get dazzled by everything from Gothic and Renaissance revivals to Art Deco and neoclassical.

As you’d imagine, The Bund is one of the most popular gathering spot for tourists in Shanghai. Make it your first stop of the day and unwind a little to its marvelous architecture and views of the futuristic Lujiazui skyline across the river before the full-on tour group onslaught descends.

Want to star off your day in Shanghai right? Check out some of these awesome day tours!

Near the northern fringes of The Bund, cross over the busy Zhongshan East Road to Nanjing Road. This eastern stretch of Nanjing Road between the river and People’s Square is Shanghai’s premier spot for shopping, featuring everything from upscale boutique stores and chain restaurants to large department stores and small local shops. 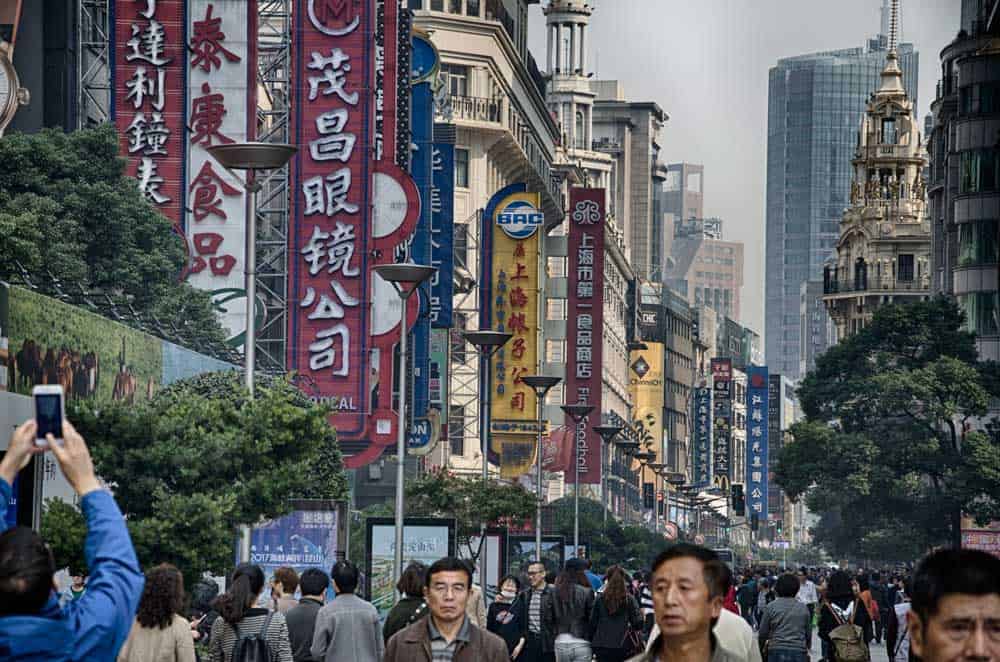 Walking the pedestrian-only section of Nanjing Road should take no more than 20 minutes. If you’re in the mood to dig deeper into China’s most popular shopping street, take these famous hotspots on for size:

Want to experience more of Nanjing Road & Shanghai with new friends? Book yourself onto one of these awesome tours!

Saunter over to the western edge of Nanjing Pedestrian Road to hobble into the heart of central Shanghai, People’s Square. Although not necessarily a must-see on its own, People’s Square is a great place to walk around and put your finger on the pulse of Shanghai.

The northern half of the square closest to Nanjing Road, the small city centre oasis of People’s Park stands in contrast to the megacity vibe around it. Even though it still feels firmly entrenched in the downtown buzz, it’s a pleasant escape into some relaxing greenery amid the chaos of Shanghai. 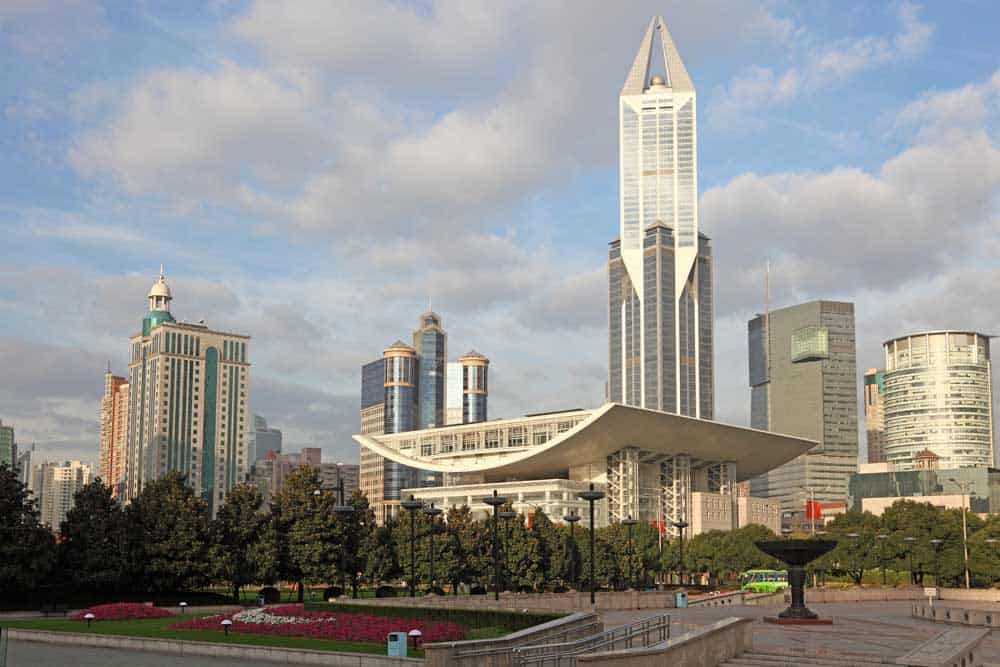 Further south is People’s Square itself, showing off Shanghai’s modern face around its sprawling open space. Fans of Chinese history should not miss a chance to visit the Shanghai Museum, located on the southern edge of the square. It features eleven galleries and three exhibition halls of ancient Chinese paintings, ceramics, calligraphy, and artifacts.

With just one day in Shanghai, you won’t have time to peruse everything at Shanghai Museum. If museums are your thing (and you rose to the occasion early enough), poke your head in and check out a couple of the more interesting exhibitions like The Gallery of Chinese Ancient Sculptures and the Ancient Jade section.

Chow down on a scrumptious lunch on Huanghe Road

Built up an appetite for the ages? Return north through People’s Park and follow your nose to one of Shanghai’s best food streets, Huanghe Road. 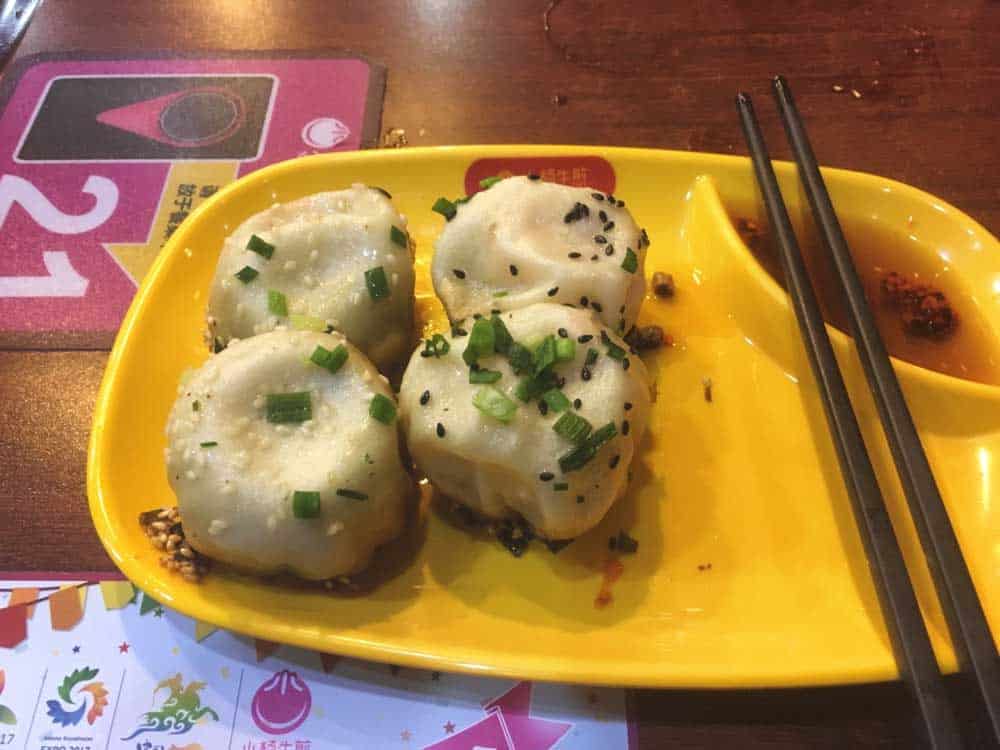 Shooting north from the Nanjing West Road and Jiujiang Road, this three-block stretch is home to some of the best restaurants in Shanghai serving everything from Shanghai’s famous xiaolongbao to fiery dishes from Szechwan.

There’s a whole slew of superb restaurants along Huanghe Road. Here are a few of the best to try out:

Mouth watering at the thought of all these Shanghainese delights? Discover more on one of these top-rated Shanghai food tours!

From Huanghe Road, walk back south to People’s Square Station and hop onto Subway Line 2 for the two-stop ride under the Huangpu River to Lujiazui. The centre of Shanghai’s financial industry, this vertically-gifted district in Pudong is where the city’s modern façade comes to the fore.

Compared to much of Shanghai, Lujiazui feels a tad staler and less lively at street level—it is mostly a business district after all. Nonetheless, scoping out the feats of modern Chinese architecture that form one of the world’s most spectacular skylines up close is an experience that everyone should have—even if you’re only in Shanghai for a day!

Besides housing the country’s most important companies and some of the best luxury hotels in Shanghai, visiting Lujizui is a must for one thing: seeing Shanghai from above.

These days, every skyscraper in Lujiazui seems to have an observation deck that unveils incredible panoramas of the cityscape. Here are a few of the better ones to choose from:

Get a taste of Shanghai’s past in Old City

From Lujiazui, it’s about a 20-minute ride on the metro to Yuyuan Garden Station where the beautiful Old City of Shanghai starts to unfold.

When you’re crafting your first China itinerary, the ageless graces of Shanghai’s Old City stimulate exactly as expected. Although it’s slowly transformed over the centuries from an ancient walled town into a hodgepodge of authentic old buildings and kitschy reconstructed ones (along with a few modern anomalies), Old City is the easiest place in the city to get a feel for Shanghai’s past. 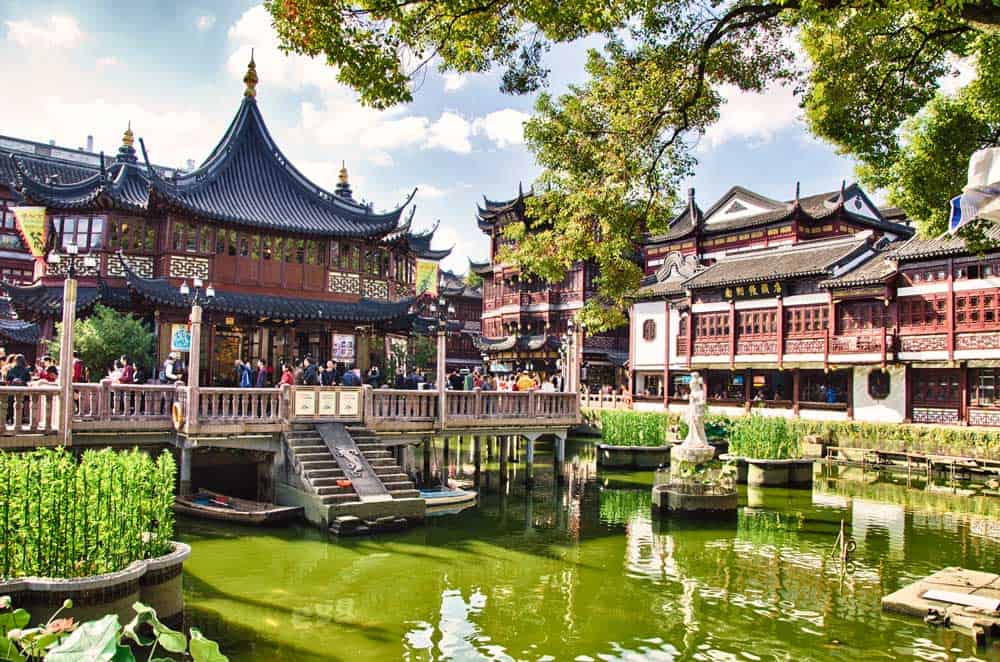 The best way to experience Old City is to simply walk around and take in its sights and sounds. Keep on the lookout for the following must-see attractions:

Want to learn a little more about Shanghai’s Old City? Join in on one of these informative tours!

Scope out Shanghai’s trendy side at Xintiandi

Flex your Shanghai Metro Pass yet again to gear up for the short two-stop ride from Yuyuan Garden Station to Xintiandi. 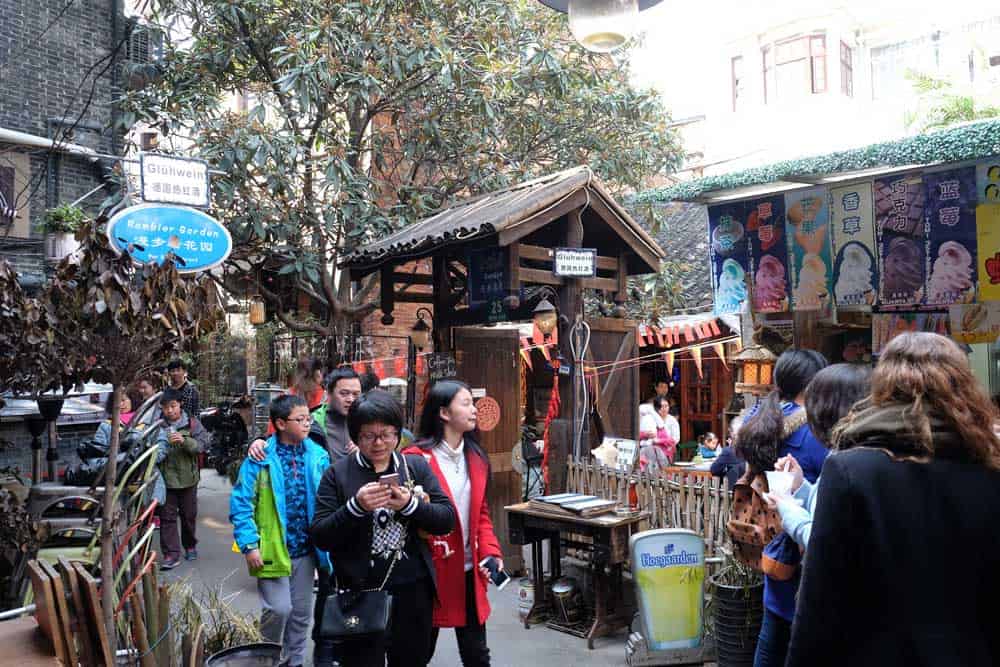 Even if some complain that it’s a little more international than Shanghainese, Xintiandi is undoubtedly one of the best places to eat Shanghai. Whether its Cantonese, Japanese, Thai, Italian or American, you can tackle any craving in Xintiandi. Here are a few ideas:

Ready to get into Xintiandi & the Old French Concession? Don’t miss a chance to hop onto one of these great tours!

Sip cocktails while admiring the skyline on The Bund

As much as I normally hate backtracking (you’ll soon thank me!), pop back onto the Shanghai metro after a relaxing dinner in Xintiandi to return to Nanjing East Road. Head east back to The Bund to catch a glimpse of the wonderful light show humming across the Huangpu River. 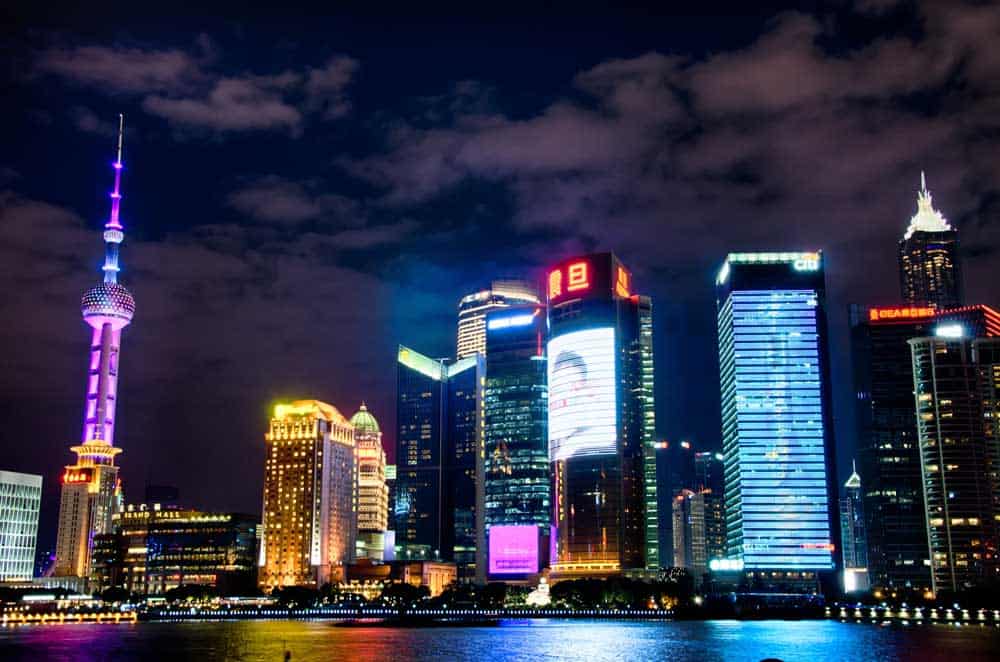 Though the view over to Pudong from boardwalk at The Bund is nothing short of spectacular, one of the best ways to experience it is with a drink in hand at one of the best rooftop bars in Shanghai. Here are a few ideas in the area:

Ready to make the most out of the evening? Join in on one of these fantastic Shanghai night tours!

Where to stay: The best hotels for 24 hours in Shanghai

Like any big city in Asia, nailing down where to stay in Shanghai isn’t always easy. Whether you’re in the air or even just travelling across the city, the immensity of this megapolis is instantly obvious.

Fortunately, for travellers with just one day in Shanghai, the choice isn’t as hard. I’d recommend sticking around Huangpu District especially the areas around Nanjing East Road, The Bund, and The French Concession (including Xintiandi).

Want to squeeze even more into your 1-day Shanghai itinerary? Here are a few of the best day tours in Shanghai:

By air: Most international flights to Shanghai are served by Shanghai Pudong International Airport (PVG). As Shanghai’s a major hub in East Asia, flights here are often relatively cheap from many international cities—even compared to popular destinations like Tokyo.

Looking for the best airfares to Shanghai? I’d recommend search for flight deals on CheapOair! It’s my new go-to flight search engine as it ALWAYS seems to uncover slightly better fares than other OTAs like Skyscanner or Kayak.

How to maximize your 1-day Shanghai itinerary: Tips & tweaks

Still not sure if this Shanghai itinerary is right for you? Here are a couple more last-minute suggestions: 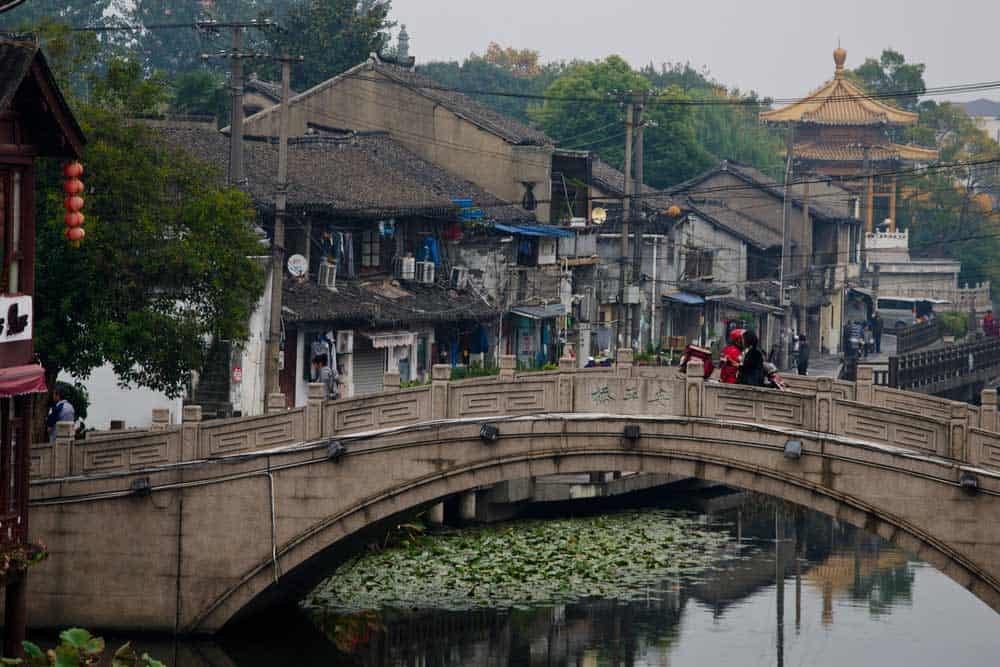 Beyond Shanghai in one day: Related itineraries 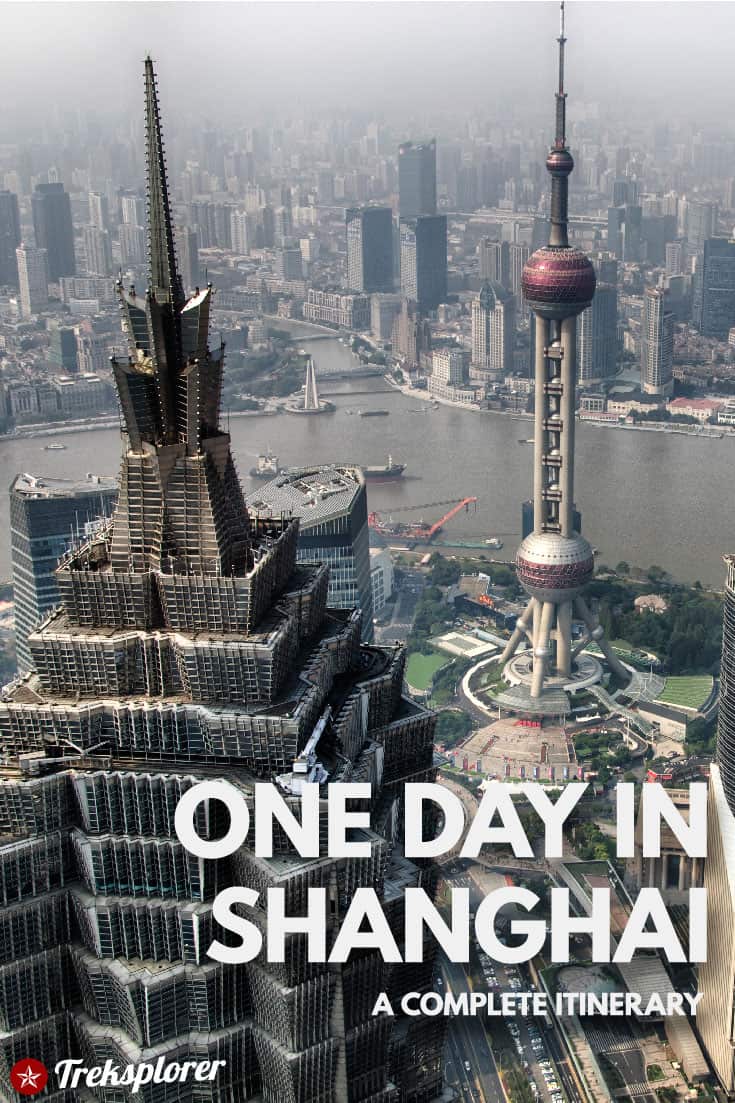