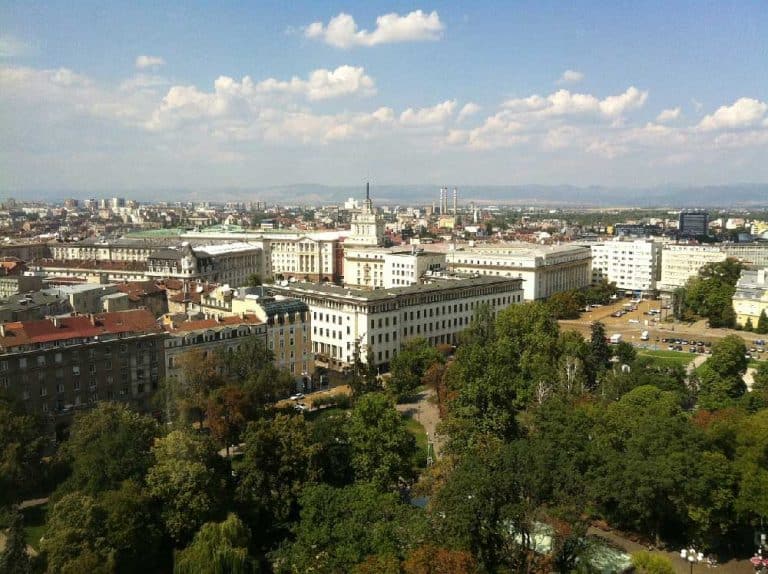 With just one day in Sofia, you may not have time to see it all – but you can cover a lot of ground. While it’s not the largest European capital city, Sofia is modern and youthful. The city has plenty of sites to explore, including historic sites that dot the skyline. The onion domes of converted mosques dot that cityscape and make for impressive destinations during your first 24 hours in Sofia.

There’s also lots of Soviet-era architecture that make for an interesting contrast. Within this landscape, you’ll find some of the best reasons to travel to Bulgaria including Roman ruins, placid parks, and some of Bulgaria’s finest museums and galleries.

Not sure where to begin your tour of Sofia in one day? Plan your trip with this complete 1-day Sofia itinerary…

Where to go in Sofia in one day: A complete 1-day itinerary

As the capital of Bulgaria, Sofia has a lot of history. Archeologists are still uncovering Roman ruins from over 2000 years ago.

In the years since the Romans, Sofia has gone through many transformations. You can still see the Islamic influences in the Catholic churches constructed from renovated mosques. 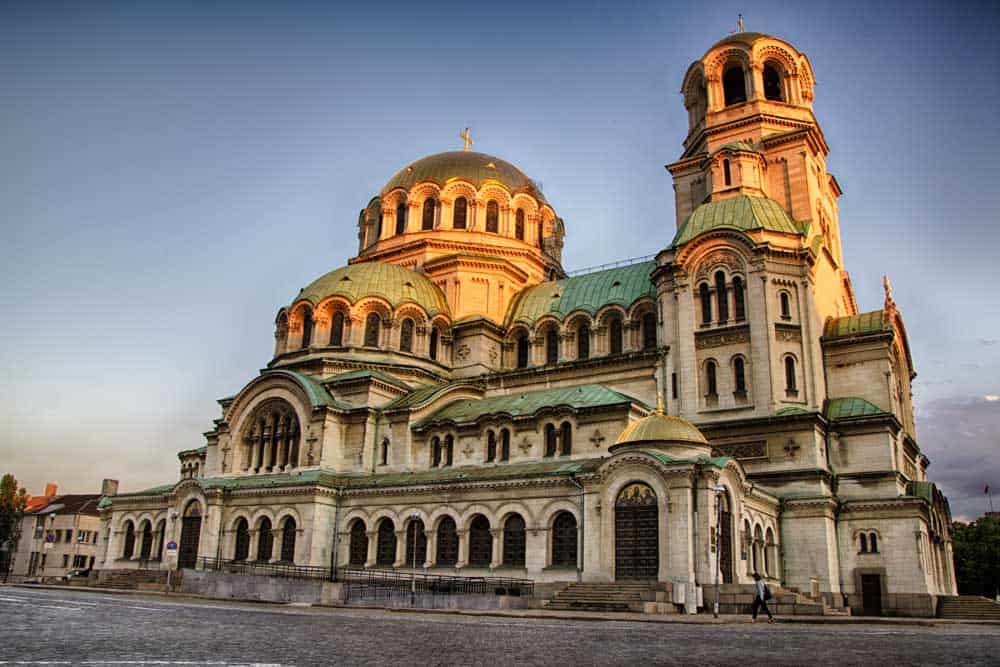 Besides historic churches, the city has lots to offer. With only 24 hours in Sofia, you’ll find it hard to explore the entire city.

Luckily, as with our other one-day city itineraries, we’ve created a roadmap for hitting the top attractions.

If you can’t think of things to do in Sofia, visit a church. There’s a lot of them and many are found in the city centre.

Starting your Sofia itinerary with a tour of the most significant churches is a great way to get your history fix before exploring the rest of the city.

Begin at St. Nedelya Square, where you’ll find St. Nedelya Church. This Eastern Orthodox church was built in the 10th century and remains one of the most popular fixtures in the heart of the city. 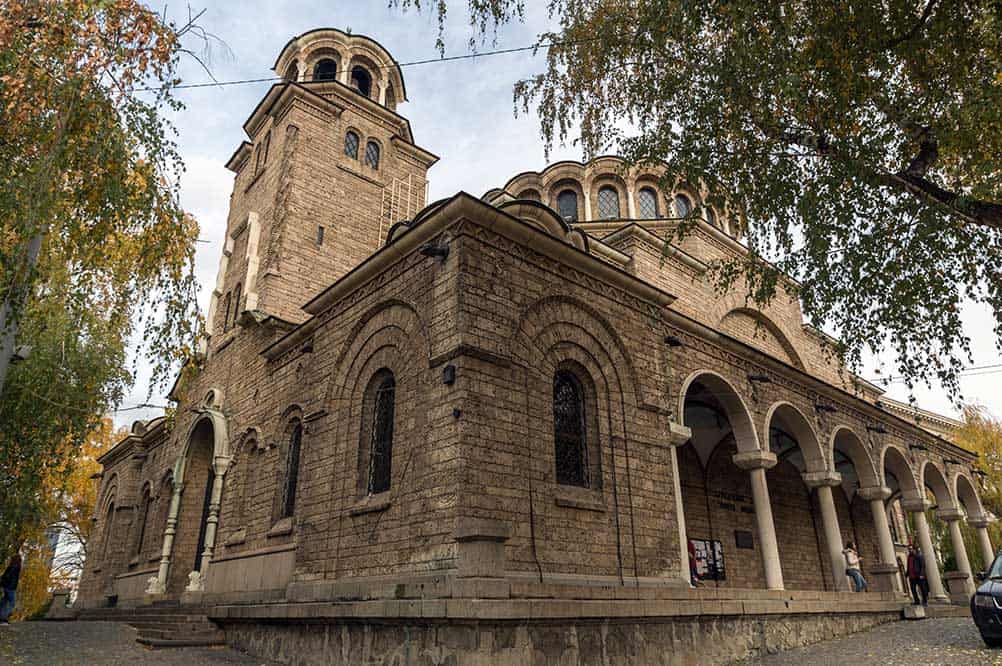 Nearby you can find St. Petka Church, the Sofia Synagogue, and the Banya Bashi Mosque, creating a tour of the big three religions. St. Petka of the Saddlers is a medieval church with simple architecture.

The main reason to visit is the large mural paintings depicting biblical scenes.

There are about a half dozen other churches in the area, but you won’t have time to visit them all. If you start your day early enough, you should be able to beat the crowds and explore the churches listed without too much trouble.

After touring the churches, travel north on the road in front of St. Petka Church. At the end of the block, you’ll find Central Market Hall.

When you see the market, you may assume that you’re visiting another historic site. This hall was built in 1909 and features the Art Nouveau style throughout the exterior façade. 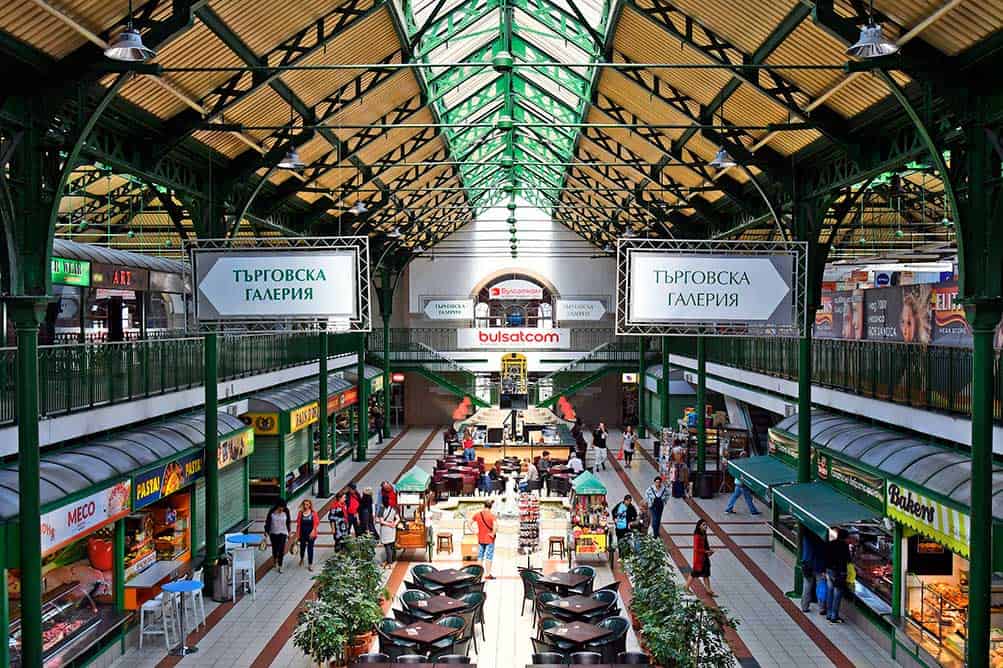 Inside the hall, you’ll find dozens of vendors selling all types of local products. You can shop for just about anything, including local produce or handcrafted goods.

The market includes three floors of stalls selling food, jewellery, clothing, and other items. Hopefully, it is still early enough for you to arrive before the throngs of tourists and locals start filling the hall.

Trying to see all of Sofia in 24 hours requires you to keep moving. It’s a busy day and you may need some extra energy to get through it.

After exploring the stalls at the Central Market Hall, start walking toward Doctor’s Garden Park. It’s directly east of the market and takes about 20 minutes on foot. 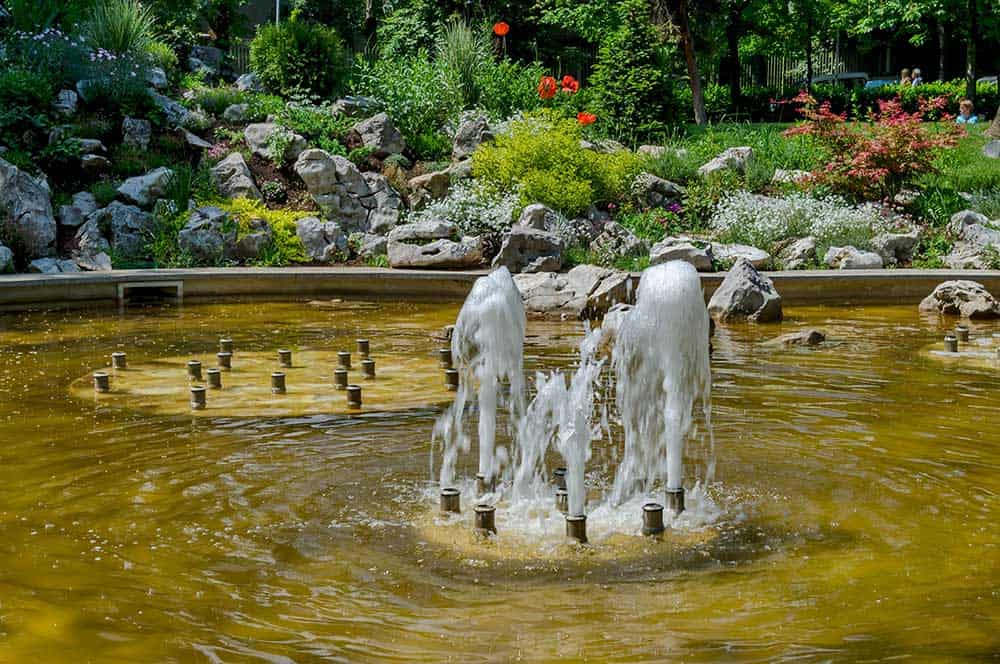 At this point, you may need to grab some food or a drink. The park often has vendors and open cafes selling hot coffee and cold yogurt. Yogurt is a local favourite, so you should have a large selection of flavours to choose from.

While you drink your coffee or eat your yogurt, explore the park and the monuments to fallen medics from the Russo-Turkish War. The monuments were built in 1883 and are located near the centre of the park.

Ride the chairlift to the top of Vitosha Mountain

You can see Vitosha Mountain from almost any point in the city. To visit it from the park, you may want to take the bus, as it’s about a 60-minute walk south.

The Vitosha Mountain is a top destination for any Bulgaria itinerary, even if you don’t visit the capital city. The mountain includes many ski resorts, trails, and the best views of the city. 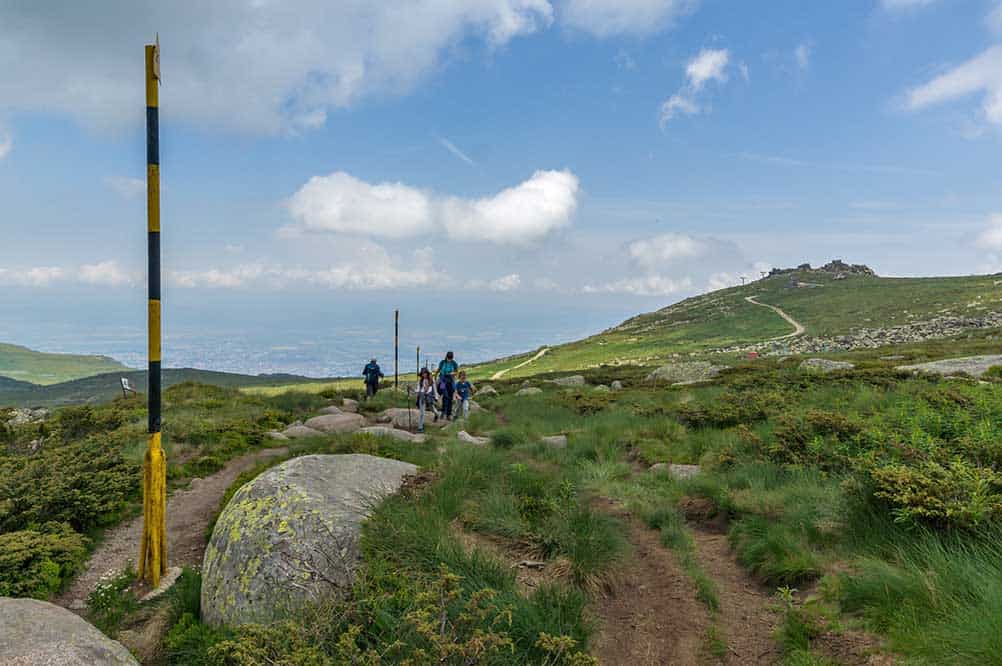 It’s an important landmark and symbol for the city of Sofia. It’s also the closest site for hiking and skiing. Bus lines run between the outer edges of the mountain and other parts of the city, making it easy to reach from any other spot.

While you may not want to ski, you can ride a chairlift to the top of the mountain and look down at the rooftops of Sofia.

During a tour of Sofia in one day, you don’t have a lot of spare time. If you come back for a longer trip, consider exploring more of the Boyana area, including the trails that take you through Vitosha mountain.

For now, you can ride the chairlift to the top within a few minutes, snap a few pics, and wait in line for the return trip.

When you get back down the mountain, travel back toward the city to reach Boyana Church. It’s within the same area as the chairlift ride before you cross the highway to the city centre.

Boyana Church is a medieval Bulgarian Orthodox Church and UNESCO World Heritage Site. It’s mostly known for its frescoes. The first one was painted in 1259, making it one of the oldest preserved monuments of east European medieval art.

Additional frescoes were added over the centuries. Later entries carry on the tradition of the icon-painting style used in the earliest frescoes.

Depending on when you visit, you may not have much time to stop and admire the frescoes. Some of the tours only last for 10 to 15 minutes.

The church also only allows about 10 people to enter at a time. Luckily, the tours are short so you shouldn’t need to wait very long.

It’s now time to head back toward the city. Just outside the centre of Sofia, you’ll come across Vitosha Boulevard. This is the main commercial street running through Sofia. 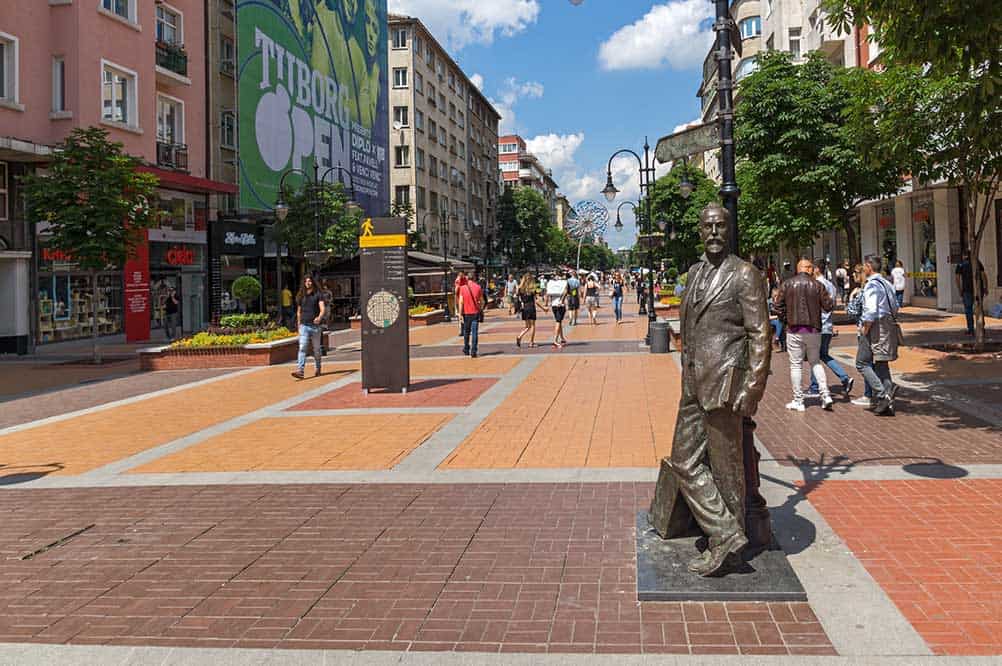 You should have no problem finding any designer brands. Some of the top fashion labels have their own outlets on this boulevard.

In recent years, the city started renovating the boulevard to restore the original 1930s style of the area. The city added historical streetlights and benches along most of the boulevard, along with Art Nouveau kiosks and more green spaces and fountains.

A large section of the boulevard is pedestrian only, allowing you to leisurely stroll and window shop as you work your way back toward the centre of the city.

Catch a performance at the National Theatre Ivan Vazov

At the end of the shopping boulevard, travel to the eastern edge of the city centre to reach the National Theatre Ivan Vazov. It’s one of several theatres in the central district that offers nightly opera performances. 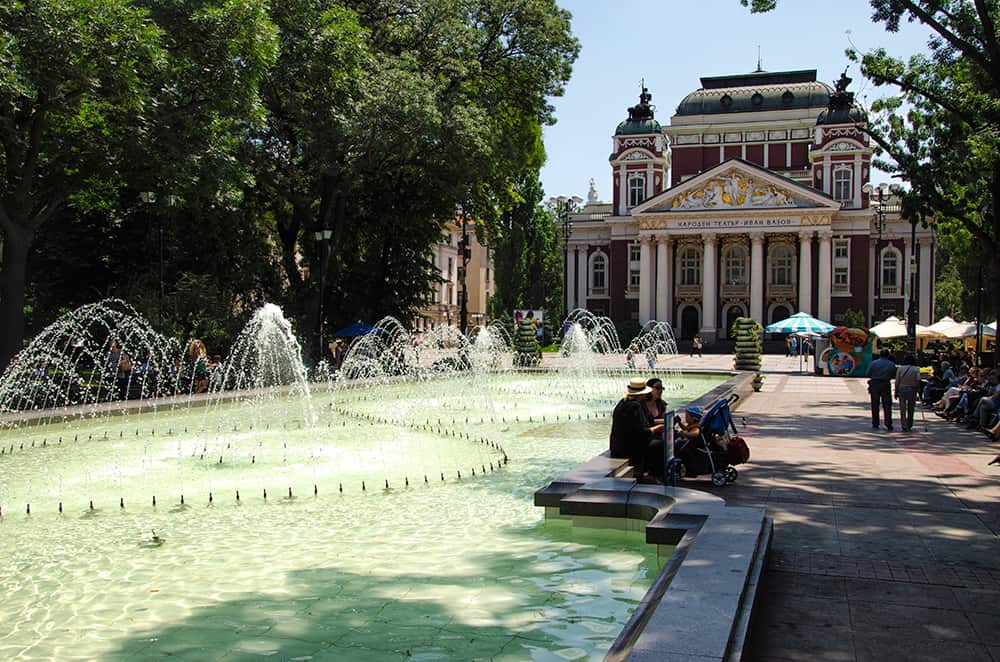 While there are other theatres, this is the oldest and most important. It’s also considered one of the most important landmarks in the city.

It faces the City Garden and was founded in 1904. It features neoclassical architecture and the main stage that seats 750 people.

The earliest performances start at 8 pm. If you want to increase your chances of getting to see a performance, purchase your tickets early. In fact, you may want to buy them before you even leave for Sofia.

Besides the national theatre, Sofia has several other options for ballet and opera.

You can visit the Sofia Opera and Ballet, Theater Sofia, the Bulgarian Army Theater, the Youth Theatre, or Theater 199. Most of these spots are within the city centre.

If opera doesn’t suit your tastes, skip this destination and continue to the bars and clubs surrounding the theatre district.

Drink and dance in the city centre

If you’re lucky enough to catch a performance at one of the theatres, you’ll likely get out late. Before calling it a day, explore the blocks surrounding the theatre to find the many popular bars and clubs that make up the city’s vibrant nightlife. 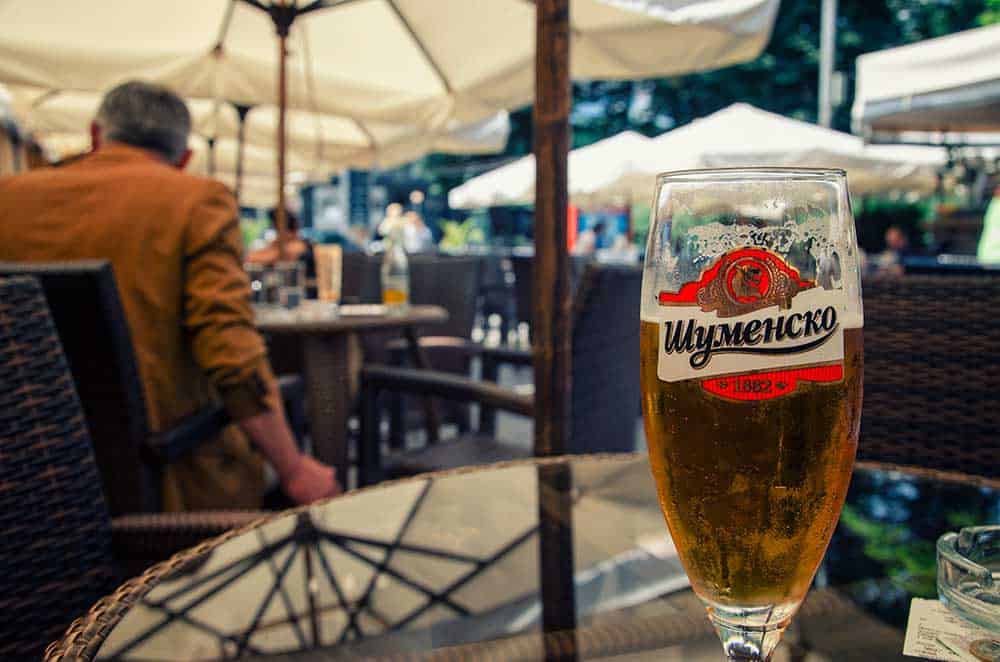 For several blocks around the large park on the east part of the neighbourhood, you’ll find bar after bar. The area is always lively in the evenings and the perfect spot to mingle with locals and enjoy a few drinks.

If you’re staying near the city centre, this is also the perfect place to close out your trip. After a few drinks, you can easily travel back to your hotel without needing to hop on a bus or take the subway.

Where to stay with 24 hours in Sofia

Although it’s one of the biggest capitals in Eastern Europe, choosing where to stay in Sofia isn’t too much of a challenge. For most travellers, Sofia’s Centrum is the best place to stay as it’s close to many of the top points of interest as well as some of the city’s best nightlife & restaurants. Here are a few hotels to start your search…