Overlooking the Bay of Naples, Sorrento is a quaint coastal town in Southern Italy. Sorrento’s known for its numerous small shops selling a wide range of local handicrafts, from ceramics or woodwork to clothing. It’s also a picturesque destination with amazing views.

Famous for its lemons, its luxurious hotels, and its beutiful plunging cliffs, Sorrento is considered the gateway to Amalfi. It’s also easy to reach from Naples and Capri, thanks to regularly scheduled connecting ferries.

Exploring the shops is enough to fill one day in Sorrento, but the town has much more to offer.

Along with being one of the best destinations in Italy for casual shopping and cliff-top views, it has a lot of history. It’s home to a 14th-century church and a centuries-old public square lined with cafes.

Not sure how to plan your trip? Get started with this complete 1-day Sorrento itinerary…

What to do in Sorrento in 24 hours: A complete one-day itinerary

As with most of our one-day city itineraries, this Sorrento itinerary gives you a chance to see the top attractions and sites. Tour museums, old churches, and a fourth-century Greek gate.

One day gives you plenty of time to explore Sorrento, shop, and dine. You’ll experience the local cuisine, stroll the beach, and work your way through the narrow streets discovering charming shops and cafes as you go.

Getting around on foot is the best option, as Sorrento isn’t very large. You can walk from the northern beachfront to the southern valley behind the town in about six minutes.

Walk on the sands of the many public beaches

Whether you enter the city from the east or west, head straight for the beaches. The beachfront area quickly becomes one of the most crowded places throughout the morning, especially on warm, sunny days. 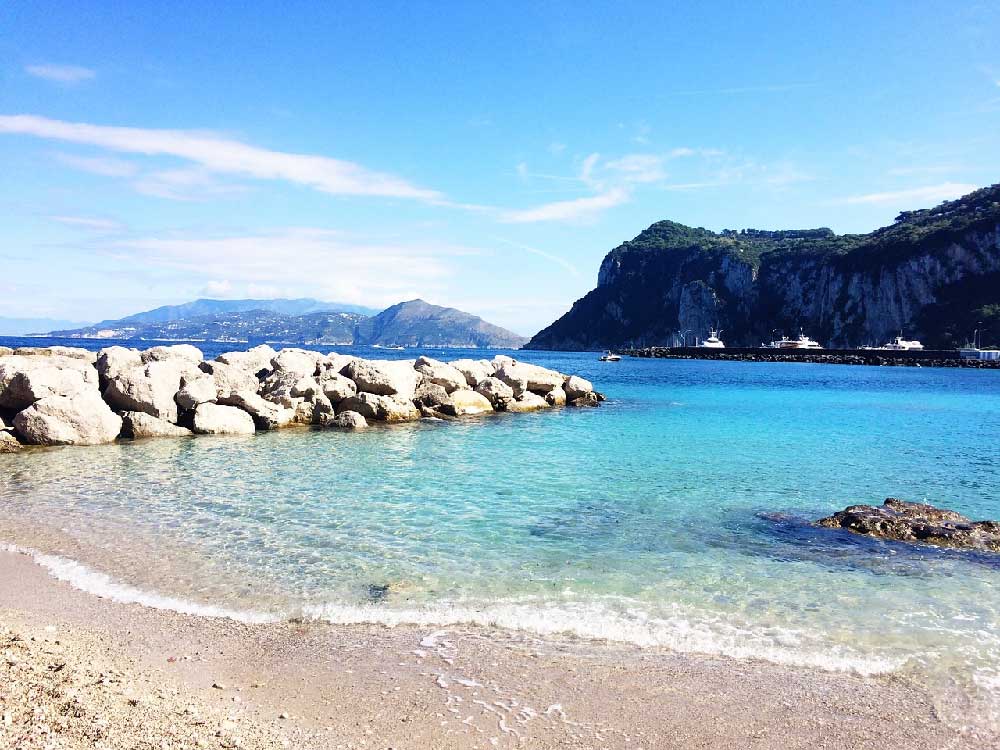 It’s also the perfect place for a stroll to start your tour of Sorrento in 24 hours. The main beach is Leonelli’s, featuring a strip of land and crystal clear waters. It’s not the biggest beach and most of the sand is covered with loungers and parasols.

It only takes a few minutes to walk the beach before you reach one of the piers. You’ll often find a few vendors in these areas selling iced treats or drinks. Enjoy the light snack as you start walking back to the start of the beach and the nearby park.

When you first reach the beach, you’ll pass Villa Comunale. It’s one of the main public parks in Sorrento and home to several important attractions. The park is also another peaceful area to stroll around during the first part of the day, before it fills up with tourists and locals.

After walking along the beach, circle back to the park and travel the paved paths lined with local plants and trees. As you leave the park, stop at St. Francis Church. You’ll likely see this historic site as you walk around Villa Comunale.

It’s an old church with a large courtyard covered in vines and other native plants. It’s a popular wedding venue and active church, but it’s open to the public during the day. Even during a wedding or church service, you’re free to step inside and admire the ornate altar.

Walk beneath the Greek Gate

After finishing up the tour of the park and historic sites, walk along the waterfront road until you reach the Greek Gate. The gate is the oldest surviving piece of Greek architecture in the area.

It’s also called Porta Marina Grande. Built in the fourth century, it originally stood underneath a tower and marked an entrance to the town. It’s now part of the attractions near the waterfront that tourists tend to check out before or after the beaches.

Take your time at the gate and the rest of the sites on this itinerary. 24 hours in Sorrento is more than enough time for a leisurely trip through the entire town.

Walk down to the water and watch local fishermen trying to snag a big catch or the lines of small fishing boats heading in and out of the bay. You’ll also find a few shops and restaurants in the area.

Explore the paths and playgrounds at Villa Fiorentino Park

From the gate, it’s just a short walk across the western edge of the town to reach Villa Fiorentino Park. The rest of the town and the top things to do & see in Sorrento are all within a few blocks of this spot. 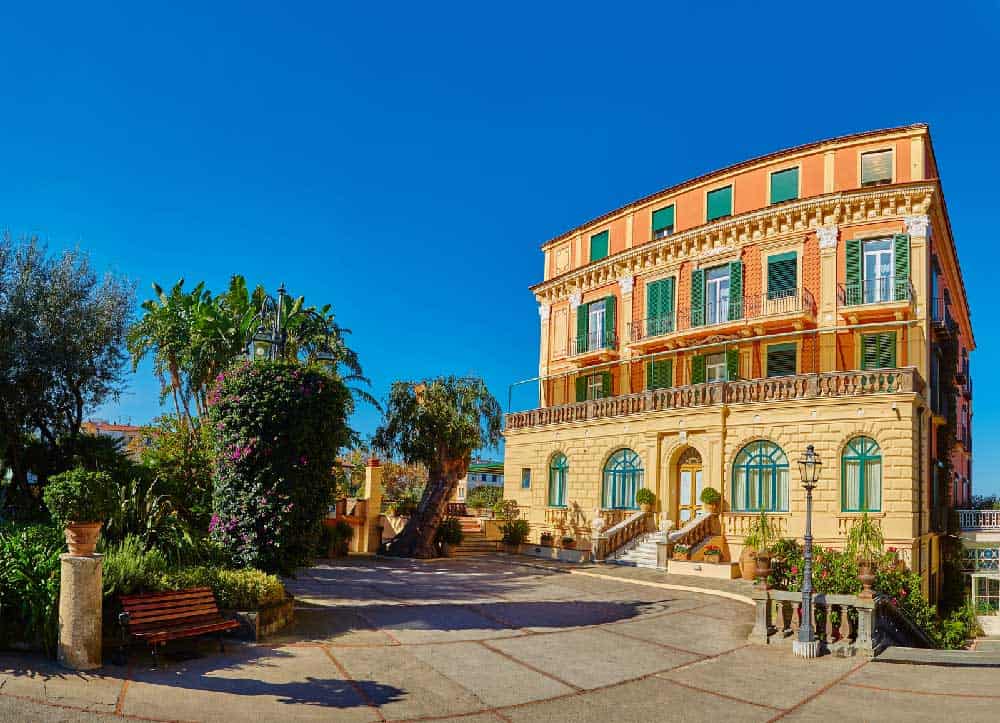 The park surrounds an old villa on the main street of Sorrento. The villa now houses an opera with evening performances. If you’re interested in opera, you could buy tickets in advance and come back in the evening.

The villa is also used for temporary exhibitions. Typically, the art exhibitions are found on the first three floors of the building, with a rotating display of artwork. In the past, the villa has showcased work from Picasso and Salvador Dali.

For now, check out more of the park. It contains several well-manicured gardens and a play area for kids.

Step inside the historic Sorrento Cathedral

After a stroll through the park, you’ll spend most of the afternoon touring old churches and historic sites, starting with Sorrento Cathedral. It’s on the same street as the park, located just a few blocks away.

The cathedral was originally built in the 11th century before being rebuilt a few centuries later. The exterior is bland, but the interior features ornate religious décor.

The variety of 14th and 15th-century buildings make Sorrento a perfect day trip for an Italy itinerary, especially if you’re a history buff. The cathedral has received major renovations over the years, but still retains several original features.

In fact, the base of the bell tower was constructed during the time of the Roman Empire. The façade is much newer, constructed in 1924, while the doors date back to the 11th century.

The next historic site is across the street from the cathedral. The outdoor frescoes of the Sedile Dominova building stand out, even when compared to the intricate façade of Sorrento Cathedral. The interior frescoes are just as detailed, featuring bright colours that bring the artwork to life. 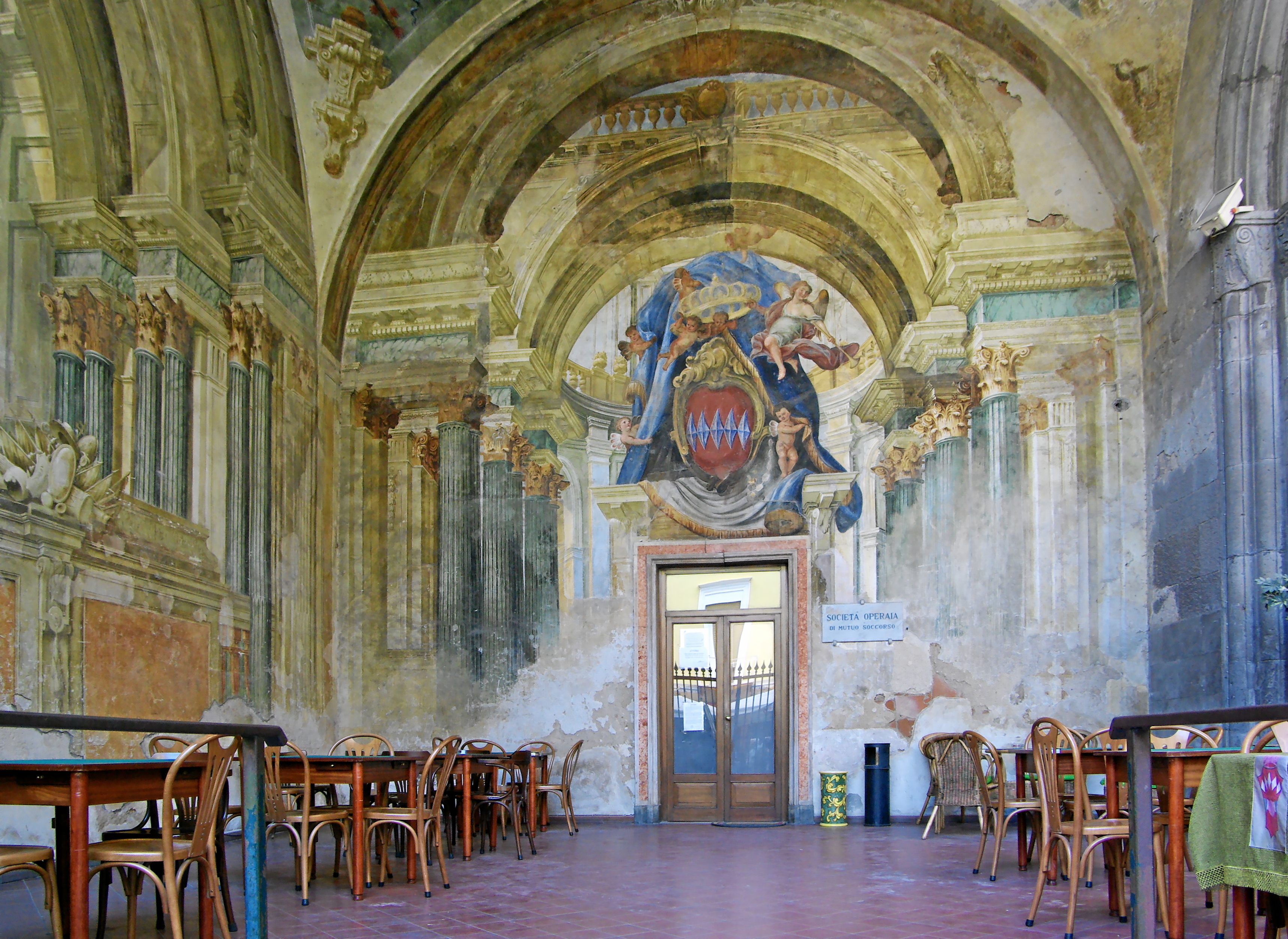 It’s on the main thoroughfare and houses a restaurant. The food is a bit overpriced, as the restaurant is inside a historic building. If you don’t want to spend too much on a meal, hold off until the next destination.

After checking out the interior of the building, browse the nearby shops. The area around the building features numerous cobblestone side streets with little shops and cafes. As you walk the streets, you’ll likely pass several woodcraft shops with beautifully handcrafted items.

Grab something to eat at a café near Palazzo Correale

The tiled courtyard at Palazzo Correale is down the street from the Sedile Dominova and another historic destination. It’s located across from Palazzo Veniero. 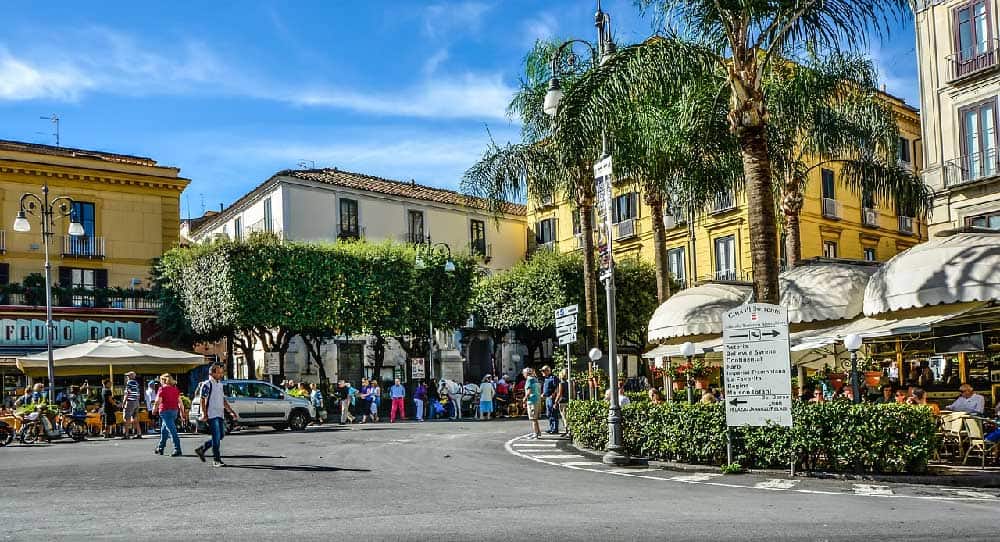 Built in the 12th and 13th centuries, the historic landmark features classic Byzantine and Arabic motifs. The courtyard across the street has a mosaic of ornate tiles. It’s also surrounded by small cafes.

Choose one of the less-busy cafes and grab something to eat. Most of the cafes feature terrace seating. Sit and watch people go by as you finish your meal or a cappuccino. You shouldn’t need to worry about losing track of time, as the nearby clock tower chimes every hour.

After getting some food or coffee, cross the street to the north to reach Sedile di Porta. It’s another open area surrounded by older buildings and shops. It’s named after the “sedile” in the centre of the street, originally erected as stone seats for the clergy. 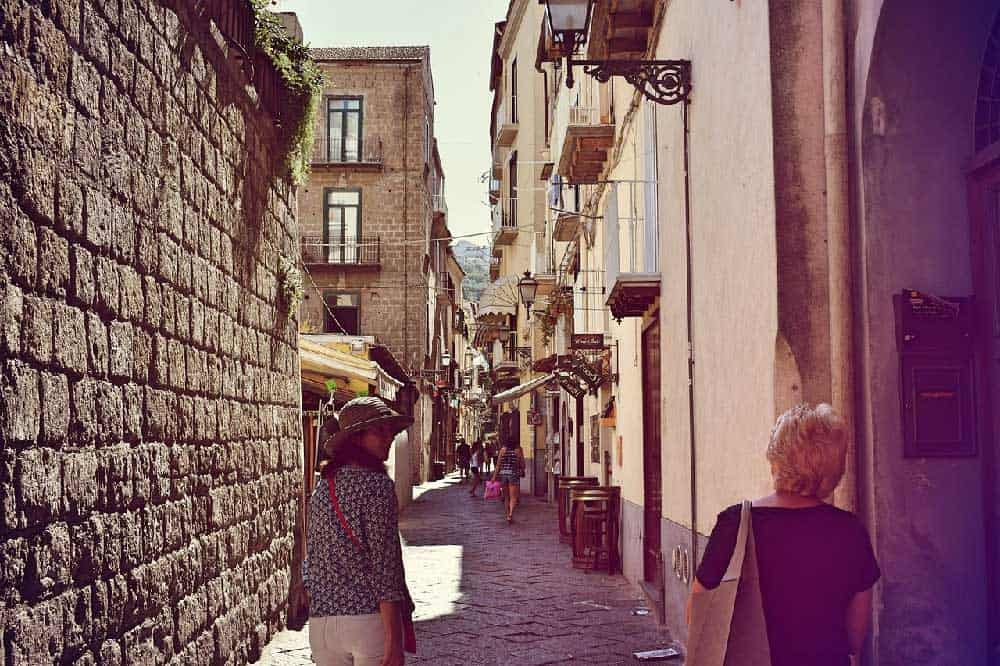 At this point, you’ve covered most of the town. The small size of Sorrento makes it a great choice for a day trip for an Italy itinerary. It also allows you to walk around and see more of the town during your short trip.

There isn’t a lot to see at Sedile di Porta, but it’s a useful landmark for setting your bearings before exploring the surrounding area. Go hunting for shops and purchase souvenirs, clothes, or local handmade goods.

Grab drinks and dinner near the beach

After seeing all of Sorrento in one day, it’s time to head back to the beach. Find a waterfront restaurant or bar and close out your trip with the local flavours. Try the cuisine and drinks, while enjoying the view of the bay. 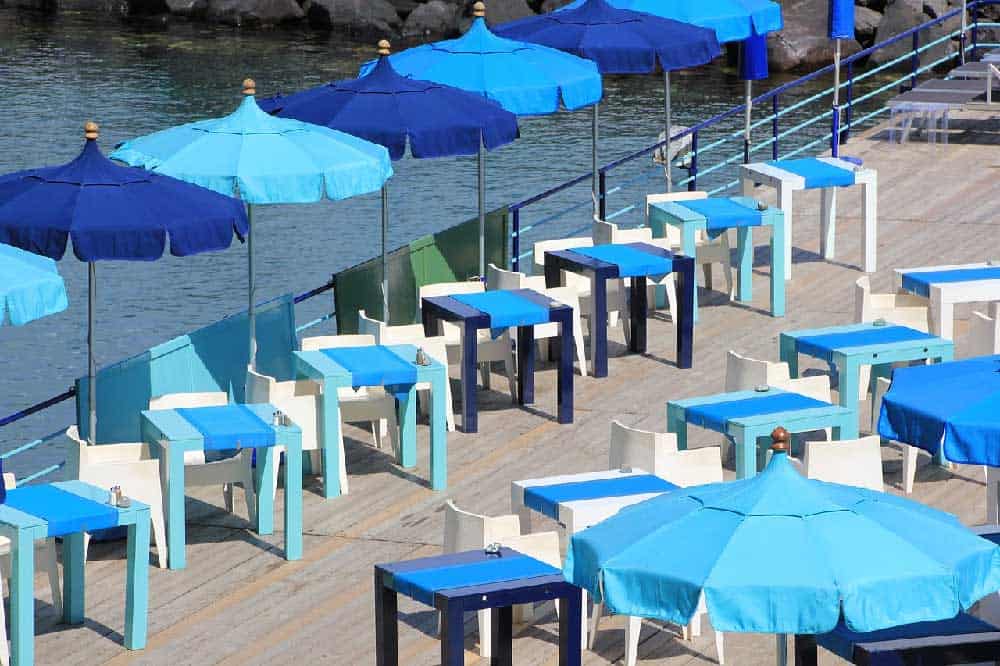 Start near the Greek Gate and work your way east across the seaside area. You’ll pass at least a dozen different restaurants and an equal number of bars and clubs. If you see something you like, stop inside.

If you decided to stay overnight and booked a room, you could also avoid the crowds and still get a view of the bay, as most of the hotels offer sea-view terraces or their own onsite restaurants that overlook the bay area.

Where to stay: The best hotels for 24 hours in Sorrento

Thanks to its compact size, choosing where to stay in Sorrento isn’t as difficult as in other Italian destinations. That’s not to say it’s necessarily easy. Sorrento is one of the popular towns on the Amalfi Coast. You’ll often need to reserve your rooms several months ahead of time to get your pick at the best places to stay in Sorrento. Here are a few options to start your accommodations search…