As the largest city in Canada, spending at least one day in Toronto while visiting the Great White North is a must. Thanks to the city’s diversity and world-famous attractions, Toronto is among the best travel destinations in Canada, receiving hordes of visitors from around the globe.

Of course, with just 24 hours in Toronto, you can’t see it all. Any time-crunched Toronto itinerary leaves plenty aside. The city is chock-loaded with museums, art galleries, unique boutique shops, and restaurants reflecting the over 200 ethnic groups that call Toronto home. There’s also a thriving  nightlife scene in Toronto and a variety of seasonal street festivals & markets to keep things interesting all year round.

Not sure where to get started with visiting Toronto in one day? Plan your trip with this complete 1-day Toronto itinerary…

What to do in Toronto in 24 hours: A complete one-day itinerary

As with most of our one-day city itineraries, your tour of Toronto in 24 hours includes stops at some of the top attractions and takes you through the most-visited parts of the city. You’ll get to shop in the world’s largest underground mall and see the skyline from the top of one of the tallest freestanding towers. 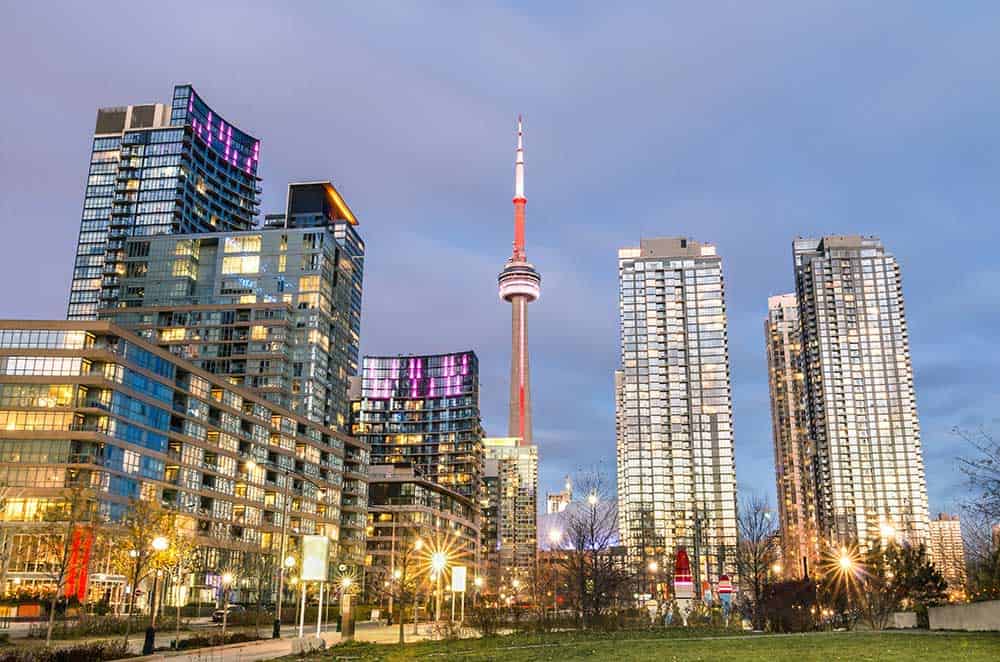 This one day in Toronto itinerary stays mostly in the city centre with its easy-to-navigate streets. Most of the stops are within walking distance of each other while the convenient underground walkways and subway system connect everything else.

Ride the elevator to the observation deck in the CN Tower

The CN Tower is a highlight for any 1-day Toronto itinerary and the most famous landmark in the city. It stands 553 metres high, providing a panoramic view of the city’s skyline. 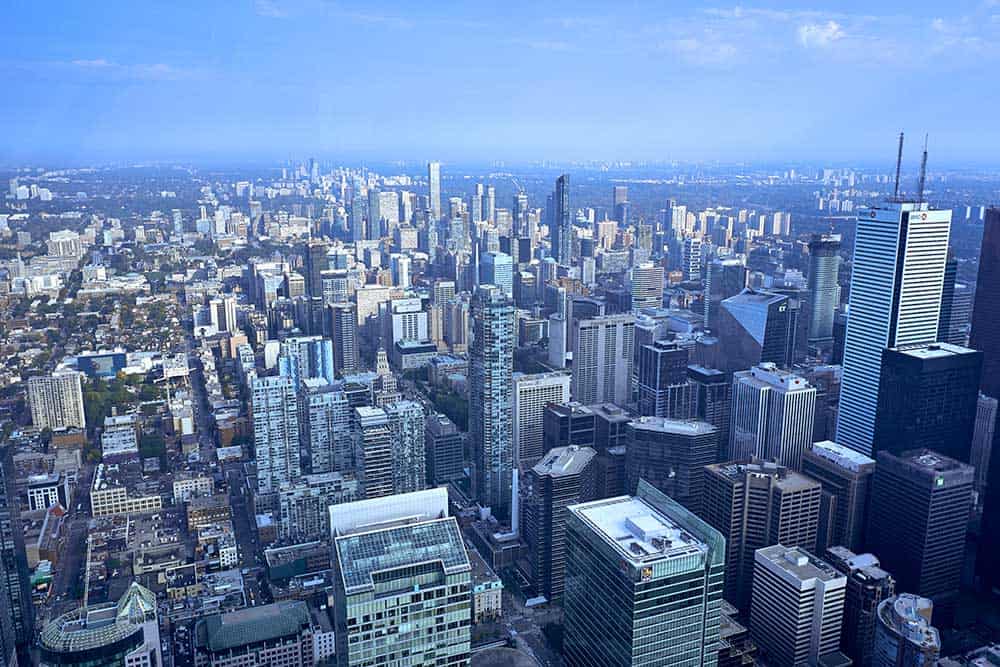 As the most famous site in Toronto, the CN Tower becomes extremely crowded as the day wears on, making it the first place that you should visit.

When you arrive at the tower, ride the elevator up to the main observation deck. Technically, you’ll need to ride two elevators.

If you’re feeling adventurous, try the Edge Walk. It’s a 1.5-metre-wide glass-bottom ledge that wraps around the outside of the main pod.

If you don’t want to step outside, the main pod includes a restaurant with 360-degree views of Toronto. While it’s early for dinner, you could grab a snack before continuing your trip.

You could also wait until you get back to ground level. The streets around the CN Tower are home to several fast-food restaurants, including a Tim Horton’s.

Spend a few minutes admiring the view of the city and the surrounding region. On a clear day, you can see all the way to Niagara Falls and the state of New York.

Right next to the CN Tower is Ripley’s Aquarium of Canada. It’s an impressive aquarium with hundreds of marine species. Unfortunately, 24 hours in Toronto doesn’t leave a lot of time.

If you plan a longer trip, check out the aquarium and some of the other sites in the area, such as nearby Roundhouse Park and the Toronto Railway Museum.

Stroll along the Toronto Waterfront and enjoy the fresh air

After planting your feet back on solid ground, continue your first one day in Toronto by walking south to the harbour. You can’t skip the waterfront during your Toronto itinerary. It’s home to a wide selection of seafood restaurants, parks, shops, and public venues. 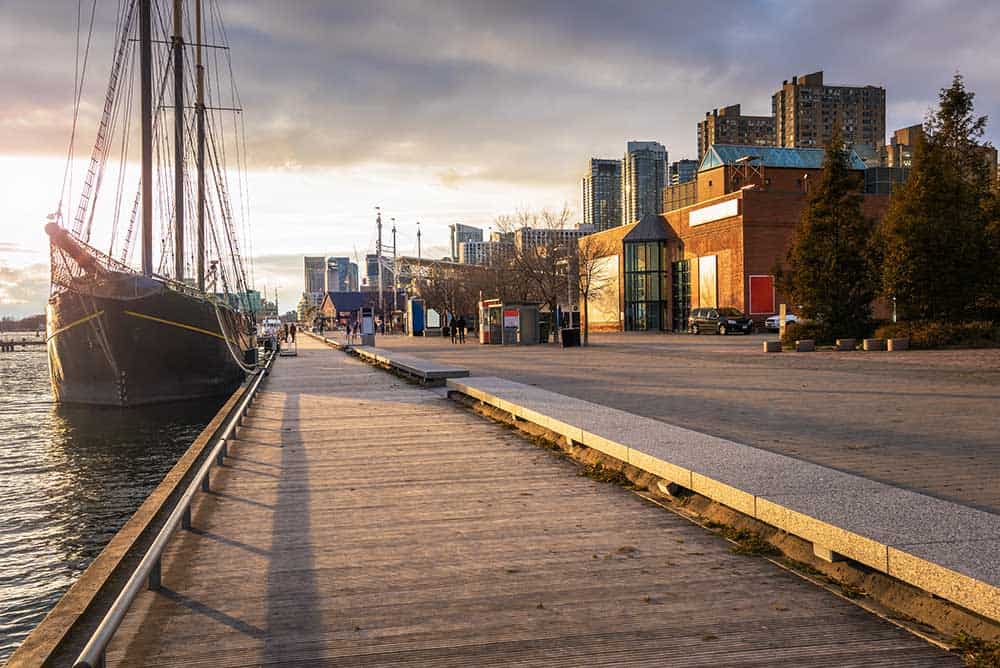 It also offers a unique perspective of the Toronto skyline. When you reach the waterfront, you’ll be on the western edge of the harbour. Admire the waterfront sites and the skyline as you walk east.

Other than the shops and restaurants, there isn’t a whole lot to do along the waterfront. The city is currently working on several revitalisation plans for the area. For now, it’s simply a pleasant place to take a stroll.

As you work your way east across the waterfront, turn left on Lower Jarvis Street to head toward St. Lawrence Market. It’s a couple of blocks away from the harbour, located inside a large hall. 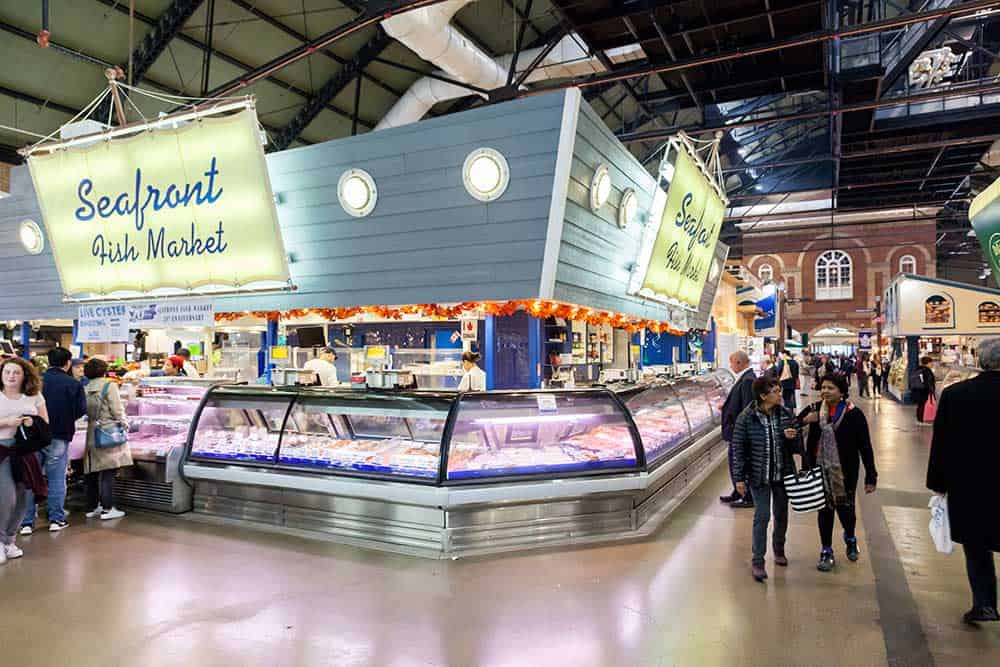 The inside contains over 120 vendors selling a wide variety of fresh produce and other foods. You can find artisan cheeses, baked goods, meat, and various prepared foods.

St. Lawrence Market opens at 8 am on weekdays and 5 am on Saturdays. It should be open by the time you arrive and will also likely be crowded. Unfortunately, you can’t avoid the crowds.

Spend half an hour or so exploring the market and checking out the various vendors at St. Lawrence Market. Grab something to eat as you walk around, such as a fresh Montreal-style bagel or local seafood.

Shop the underground at Toronto Eaton Centre and the PATH Network

St. Lawrence Market is south of downtown Toronto and the sprawling Eaton Centre. The Eaton Centre also provides access to the PATH network of walkways and underground tunnels. 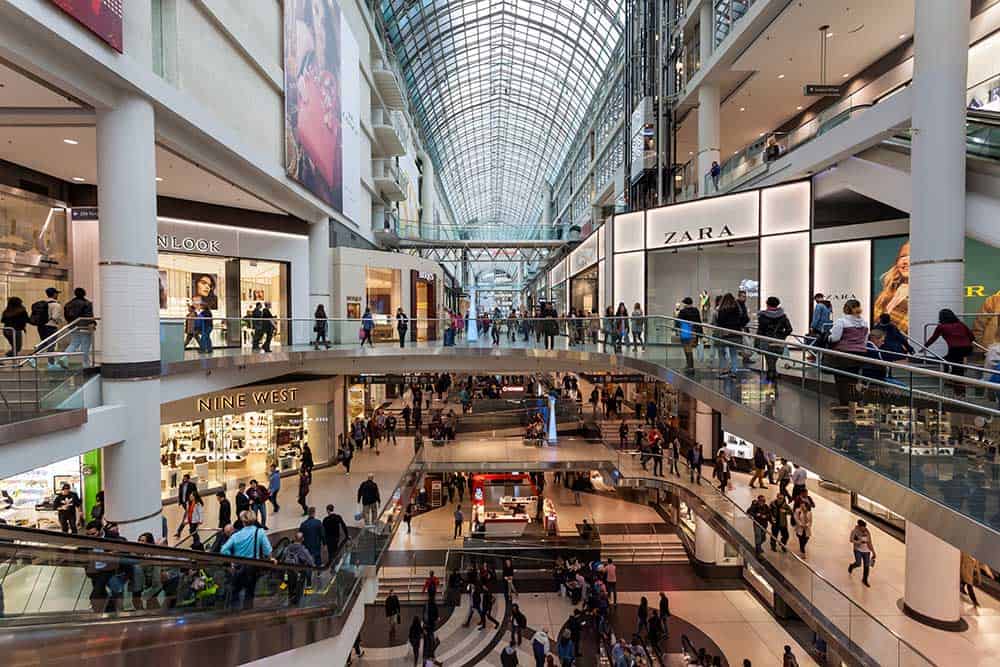 The network that connects the Eaton Centre houses the largest underground shopping mall. You’ll find hundreds of shops, restaurants, and even a few hotels.

The PATH connects some of the top things to do in Toronto. In fact, you could travel from the CN Tower to the Eaton Centre and about half of the other sites on this itinerary without stepping outdoors.

Over 1200 stores and services are connected via the various tunnels and elevated walkways. Spend the rest of the morning browsing the shops and travelling through the underground tunnels.

The only drawback is the size of the complex. With over 30 kilometres of tunnels and walkways and a large portion of time spent underground, it’s easy to get turned around or lost.

Whenever you see a map, stop to get your bearings before continuing your trip.

If you don’t get lost in the Eaton Centre, travel west to Nathan Phillips Square. It’s just a couple of blocks away and connected via the PATH network. 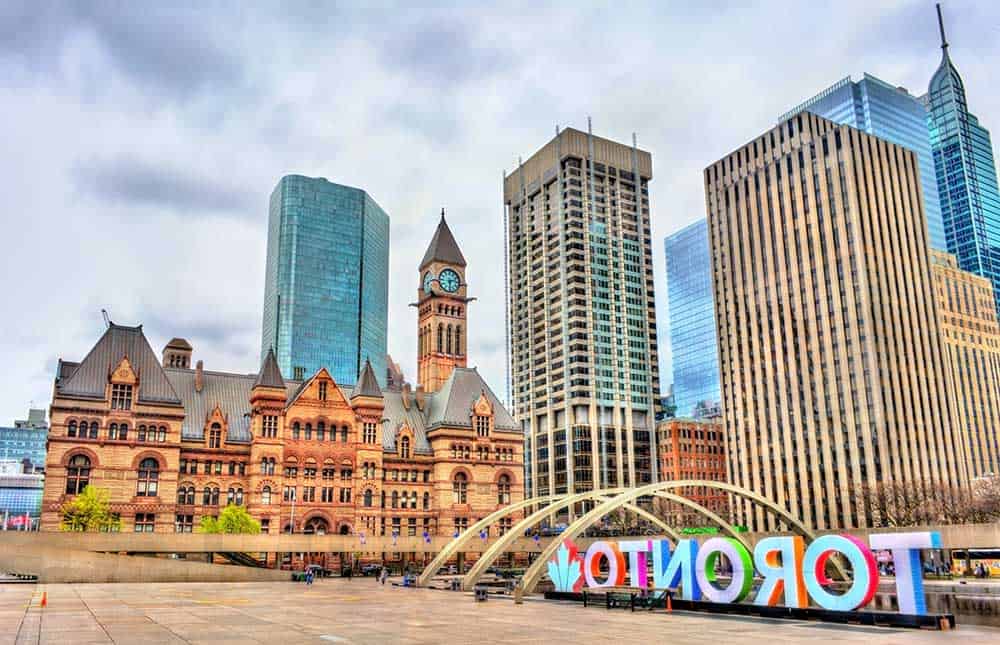 The huge public square is the main meeting spot for locals and the site of various concerts and a weekly farmers’ market. Depending on the time of the year, you may also find an art exhibit or rally happening in the square.

Nathan Phillips Square includes several attractions, including a large reflecting pool in the centre. In the winter, the pool becomes a skating rink. If you’re visiting during the warmer months, you can stop and catch your reflection in the water.

After passing the pool, stop at the Peace Garden. It’s a memorial to the atomic bombing of Hiroshima. Rest at the pavilion and enjoy the views of the surrounding plant life.

Browse priceless paintings at the Art Gallery of Ontario

A few blocks west of Nathan Phillips Square stands the Art Gallery of Ontario. The interesting blue building combines modern and older architecture to create a unique addition to the skyline. 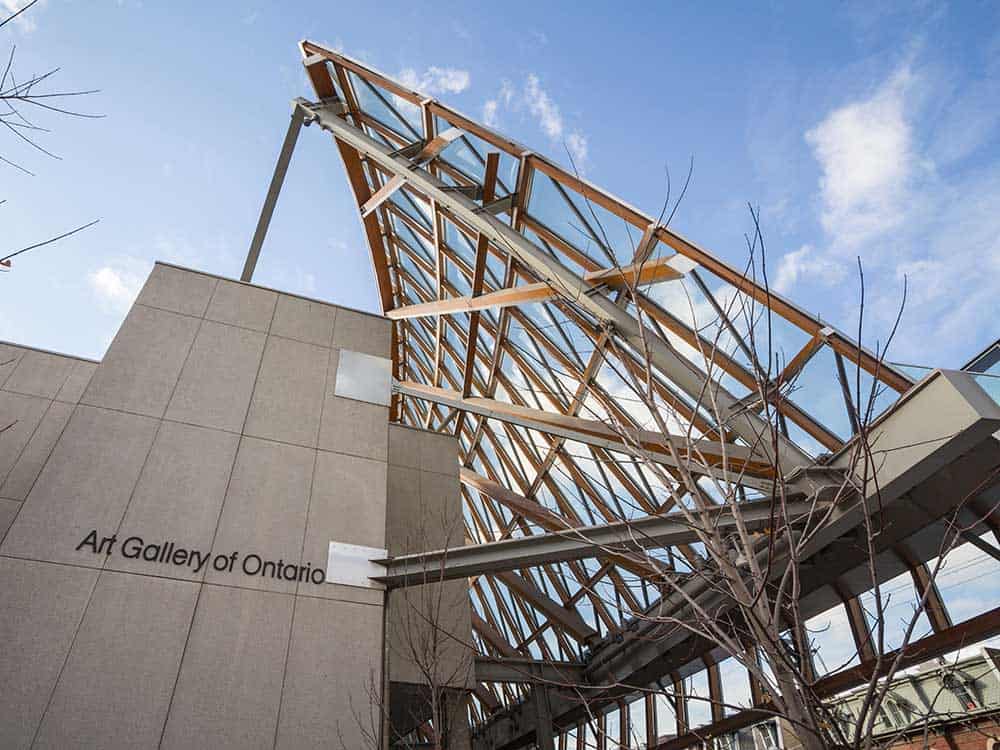 The bottom half of the main wing retains the original façade, featuring Georgian architecture that was popular in the 19th century. The top half is completely modern with a large blue surface.

The museum originally opened in 1900 and has expanded several times, resulting in the odd combination of architecture on the exterior of the building.

Inside the gallery, you’ll find over 95,000 pieces of art, including paintings from European masters and various examples of contemporary art. The museum has a modern art exhibit, mostly containing sculptures.

It also holds one of the largest collections of work from Canadian artists, including pieces from many indigenous artists.

Browse original artwork with a trip through Graffiti Alley

After a tour of the gallery, cut across Chinatown to reach Graffiti Alley. It’s a complete contrast to the art that you saw inside the Art Gallery of Ontario. Instead of priceless paintings, the alley contains an endless collage of graffiti from local artists. 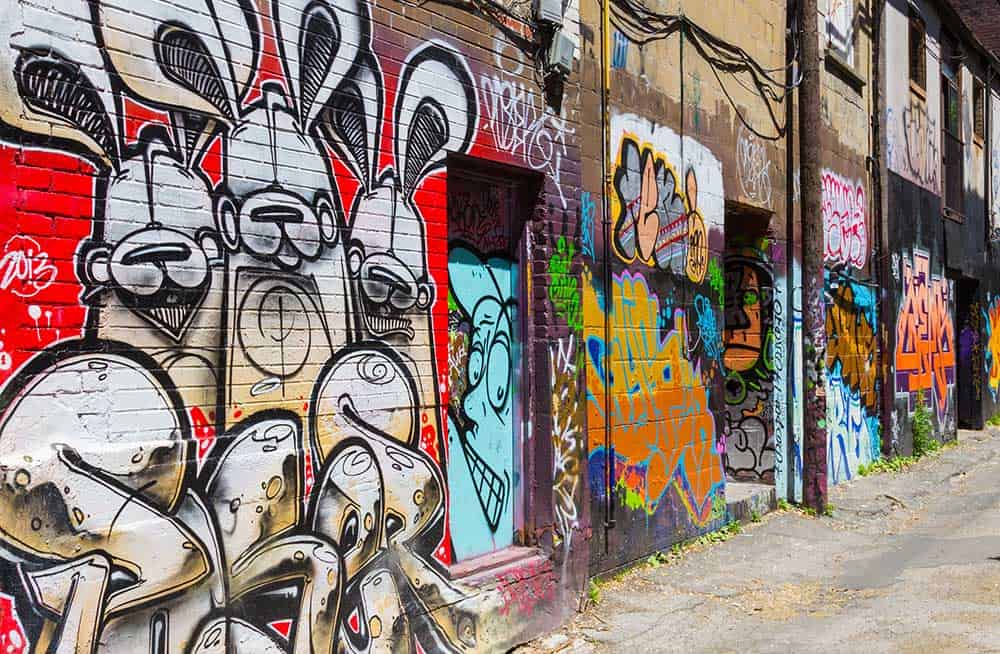 Graffiti Alley runs between Queens Street and Richmond Street. It’s a narrow pedestrian alley with brick and concrete buildings on each side. The exterior of these buildings provides the canvas for graffiti artists.

The art pieces and murals constantly change as artists regularly paint over older works and add new creations. It’s an interesting place to visit and often overlooked by tourists.

If you’re feeling a little peckish, the adjacent street is lined with cafes, bars, restaurants, and shops. Queen Street West is just north of the alley and is one of the main shopping streets in Toronto.

Catch a show or grab dinner in the Entertainment District

When you finish admiring the local graffiti or shopping on Queen Street West, walk a few blocks south to search for food and drinks in the Entertainment District. 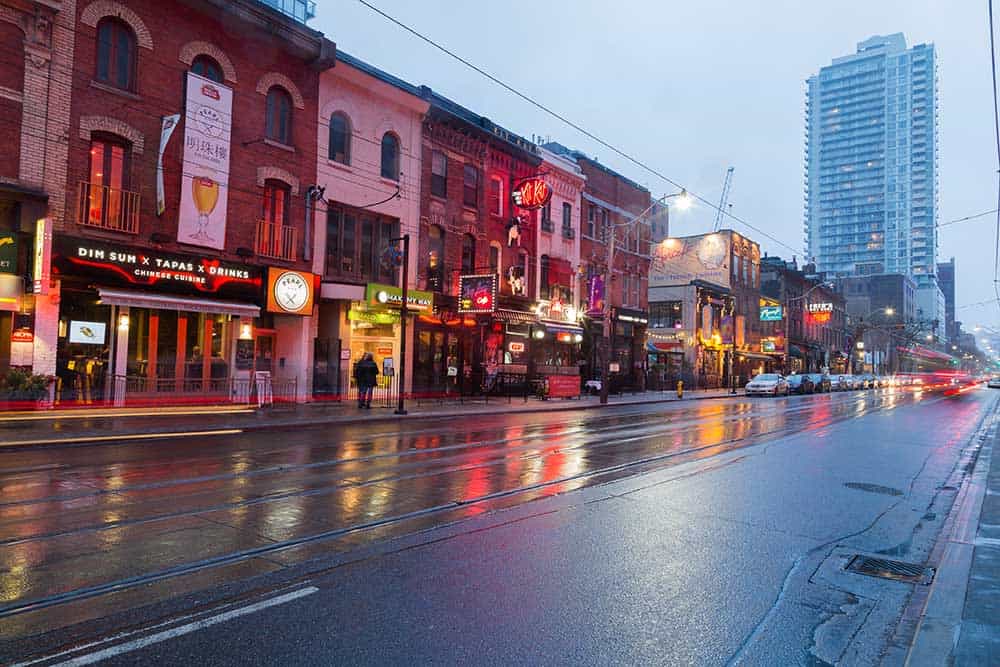 The Entertainment District of Toronto is mostly found along King Street, just east of Graffiti Alley and south of the downtown area. It’s hard to miss, thanks to the bright displays and neon signs outside of the various theatres and performing venues.

To go along with the entertainment, this area includes a wide range of dining options including some of the finest establishments in Toronto.

Finish off your tour of Toronto in one day with entertainment. Walk King Street looking for a place to eat or drink. You could also enjoy a play, musical, or concert. Of course, you may need to book tickets ahead of time.

Where to stay: The best hotels for 24 hours in Toronto

As Canada’s biggest city, choosing where to stay in Toronto can sometimes be tough. For most travellers with a quick layover in Toronto, however, the answer is quite simple.

The best areas to stay in Toronto for travellers are those in & around the downtown core including the Entertainment District, Yorkville, and West Queen. Here are a few top hotels to start your search…

Beyond Toronto in one day: More Canada itineraries