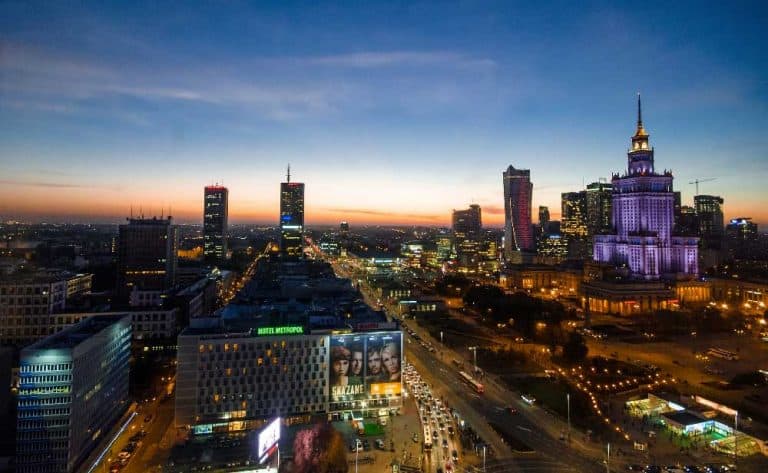 Whether you’ve carved out 10 days in Poland or a month, spending at least 24 hours in Warsaw is a must. Although Krakow attracts the most attention from travellers, the heart of modern Poland beats in Warsaw. No Polish city surprises visitors more than this buzzing modern European capital.

I must admit: When I first visited Warsaw, it wasn’t love at first sight. Stepping outside Warszawa Centralna, an unfortunate encounter left an unsavoury first impression. Determined to prove Warsaw’s detractors wrong, though, I trudged on. I quickly began to enjoy the city much as I first hoped.

Only able to sneak in one day in Warsaw? Let the city get under your skin by following along with this complete 1-day Warsaw itinerary…

Looking for more ideas for your trip? Check out our other city itineraries and our Poland Travel Guide for more recommendations on when to visit, where to go & what to do!

What to do in Warsaw in 24 hours: A complete 1-day itinerary

Unlike other cities in Central Europe—including the former Polish royal capital of Krakow—Warsaw isn’t one of those easy-to-digest European cities that charms at first glance. The image of an idyllic and graceful Central European capital doesn’t quite apply here. (Well, at least not completely.)

The explanation is simple. World War II was not kind to Warsaw, leaving almost 90% of the city in ruins. Much of central Warsaw hails from the postwar period. Most of its buildings reflect modern architectural styles—some forgettable & regrettable.

Fortunately, it doesn’t end there. Sprinkled throughout Warsaw, you’ll find no shortage of eye-catching buildings. Many are reconstructed from their original Gothic, Renaissance, Baroque and Neoclassical forms. It creates an architectural palette unlike any other city in Europe.

And while that’s reason enough to carve out at least 24 hours in Warsaw, there’s more to the city than that. The Polish capital also intrigues as one of Europe’s most underrated cultural destinations. The food & drink scene in Warsaw is pumpin’ and among the best in Central Europe. It stands up alongside regional heavyweights like Budapest, Prague, and Berlin. And the bonus? Warsaw does it while keeping a low profile among the tourist hordes.

Convinced? Let’s see what to do in Warsaw in one day…

Preparing for your Warsaw itinerary? Don’t forget to protect yourself with travel insurance!

Travel insurance from WorldNomads.com is available to people from 140 countries. It’s designed for adventurous travellers with cover for overseas medical, evacuation, baggage, and a range of adventure sports and activities.

Get charmed in Old Town Warsaw

For anyone who’s been convinced that Warsaw lacks charm, put the idea to rest. Begin your day with a walk through Old Town Warsaw. Sure, Warsaw’s Old Town won’t strike a chord as forcefully as its equivalent in more popular Krakow or Prague, but discovering its rich tapestry of (reconstructed) medieval, Gothic, and Renaissance architecture is absolutely one of the best things to do in Warsaw.

Start exploring Old Town Warsaw at Rynek Starego Miasta (Old Town Market Place), the heart of the historical district. This beautiful square is lined with reconstructed 17th-century merchant houses. It’s the perfect place to slow down before kicking your Warsaw itinerary into gear. Grab a cup of coffee and a snack at one of the cafés along here. Soak in the sights & sounds of Old Town Warsaw before continuing on. 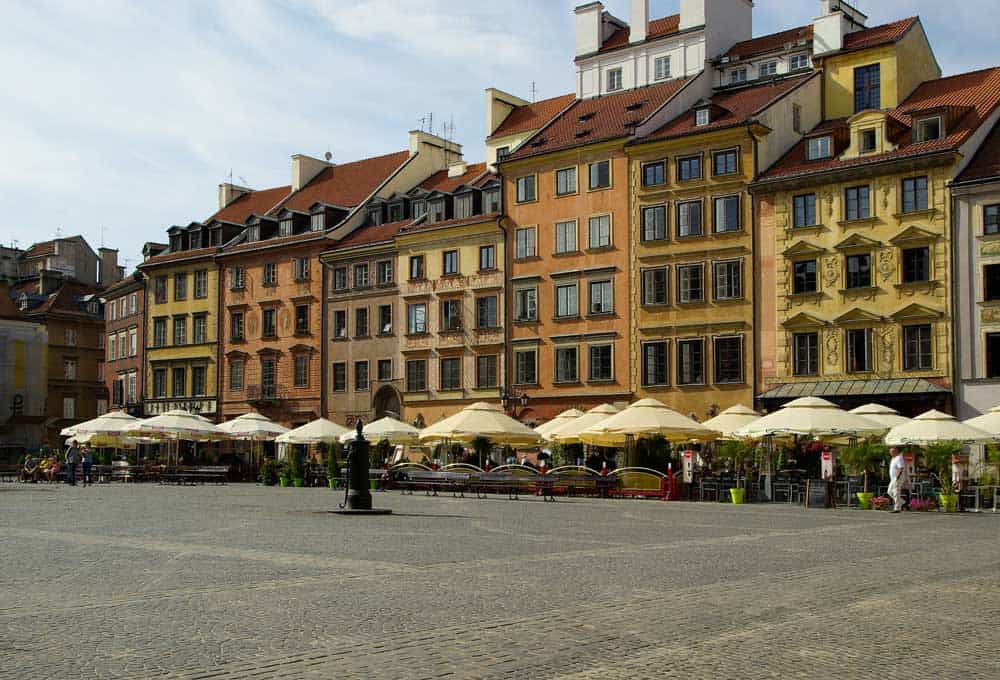 The best way to experience Old Town Warsaw is to let your feet march you through its narrow streets to see what you uncover. With only one day in Warsaw, you won’t experience everything here. Keep on the lookout for these top Old Town Warsaw attractions:

Stroll along The Royal Way

Once you’ve got your fill of Old Town Warsaw, head towards central Warsaw. The route via Krakowskie Przedmieście is also known as The Royal Way. Along this famous avenue lies half a dozen beautiful palaces. You’ll see Tyszkiewicz Palace, the Presidential Palace, and Potocki Palace. There’s also a handful of impressive churches. Look out for St. Anne’s Church, Carmelite Church, and Church of St. Joseph of the Visitationists. 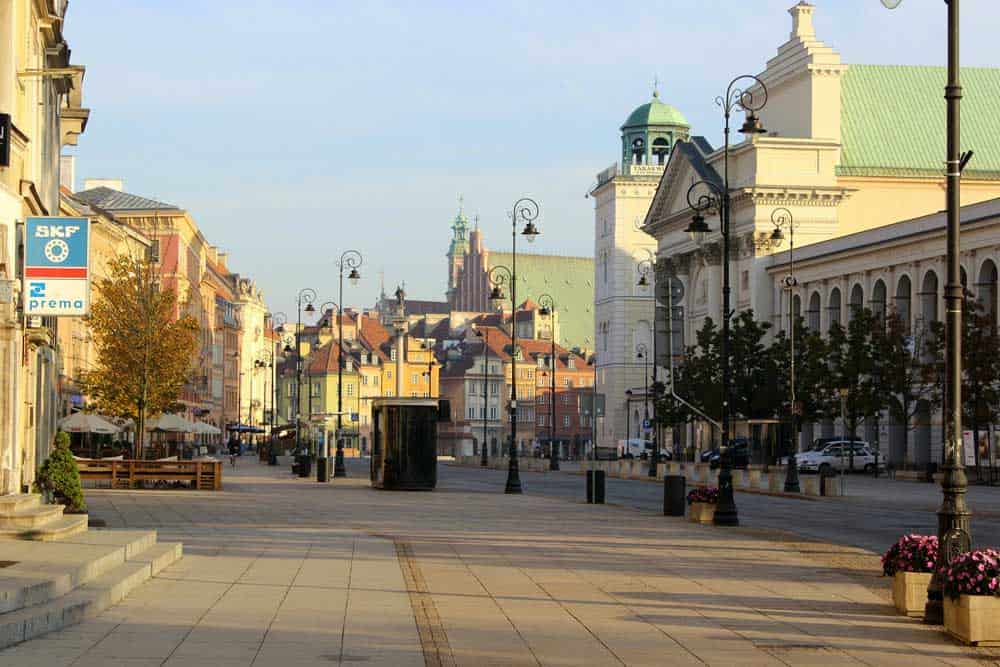 Pass by Kopernika Square. The square is home to a statue of Nicolaus Copernicus, the Polish astronomer who first theorized that the earth rotated around the sun. Continue by swinging right on Świȩtokrzyska to continue into the heart of Warsaw.

PRO TIP: Catch all of the city’s must-sees with a little dash of nostalgia on the quirky & unique 4-Hour Retro Fiat Tour of Warsaw!

Check out Warsaw from above at the Palace of Culture & Science

Much to the dismay of many Varsovians, I couldn’t leave the enormous Palace of Culture & Science off this 1-day Warsaw itinerary. If you love seeing cities from above (or want to tackle a crippling fear of heights), it’s a must-visit. From the corner of Nowy Świat & Świȩtokrzyska, it’s about a 15-minute walk to get here. You, literally, can’t miss it.

This monolithic skyscraper is often dubbed “Stalin’s Last Erection.” It came as a “gift” from the Soviet leader in Poland’s communist postwar era. Kinda explains why it isn’t exactly celebrated, eh? 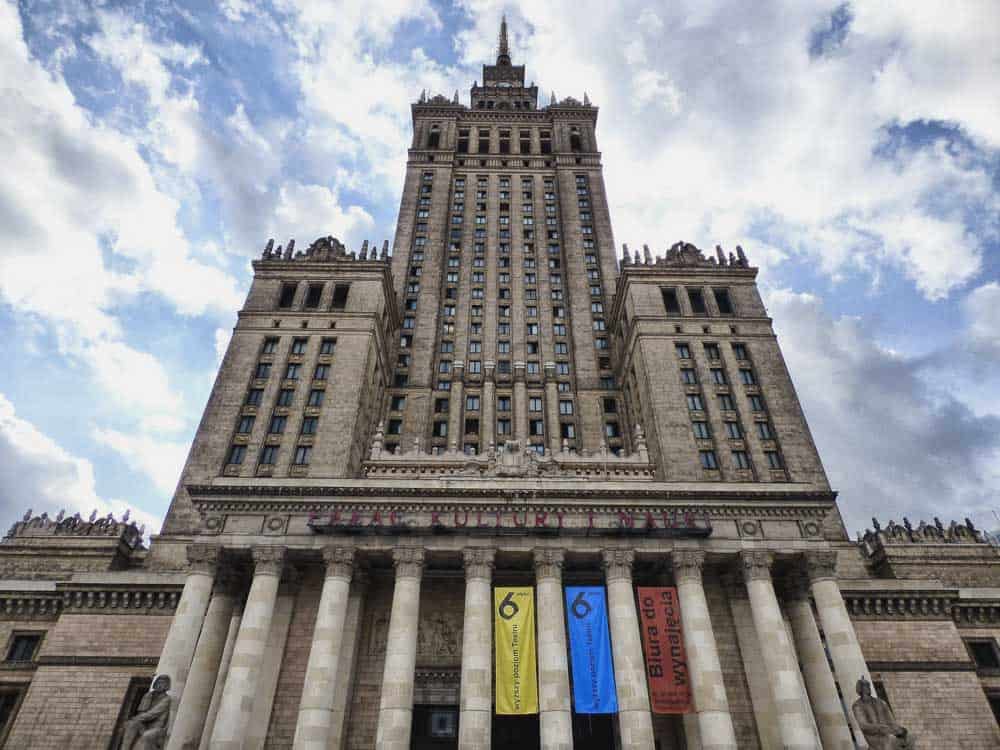 Nonetheless, I’m willing to bet that most travellers, detaching themselves from the building’s former political connotations, will be fascinated by it.

The main reason to visit the Palace of Culture & Science is for the views. Hop into the high-speed elevator (20zł for adults / 15zł for children) to blast up to its 30th-floor observation deck. At the top, you’ll enjoy sweeping vistas over Warsaw’s vast skyline.

PRO TIP: Interested in Poland’s socialist past? You’ll absolutely LOVE the 3-Hour Warsaw Communism Tour. On the tour, you’ll zip around the city in a retro van with a professional guide. You’ll uncover stories of Varsovian life under socialist rule and its legacy.

Enjoy a nostalgic taste of Warsaw at Bar Prasowy

Finished dabbling into Warsaw from above? Drop down in front of the Palace of Culture & Science onto Marszałkowska, one of the main drags in central Warsaw. Walk two kilometres south (or take a tram), building up an appetite for your next stop: Bar Prasowy.

Many remnants from the communist era linger around Warsaw, but perhaps none are as compelling as milk bars. Taking its name from the cheap & hearty dairy-based foods on their menu, milk bars (bar mleczny) are among the best places in Warsaw to eat. They’re an absolute must-visit—even if you only have one day in Warsaw! 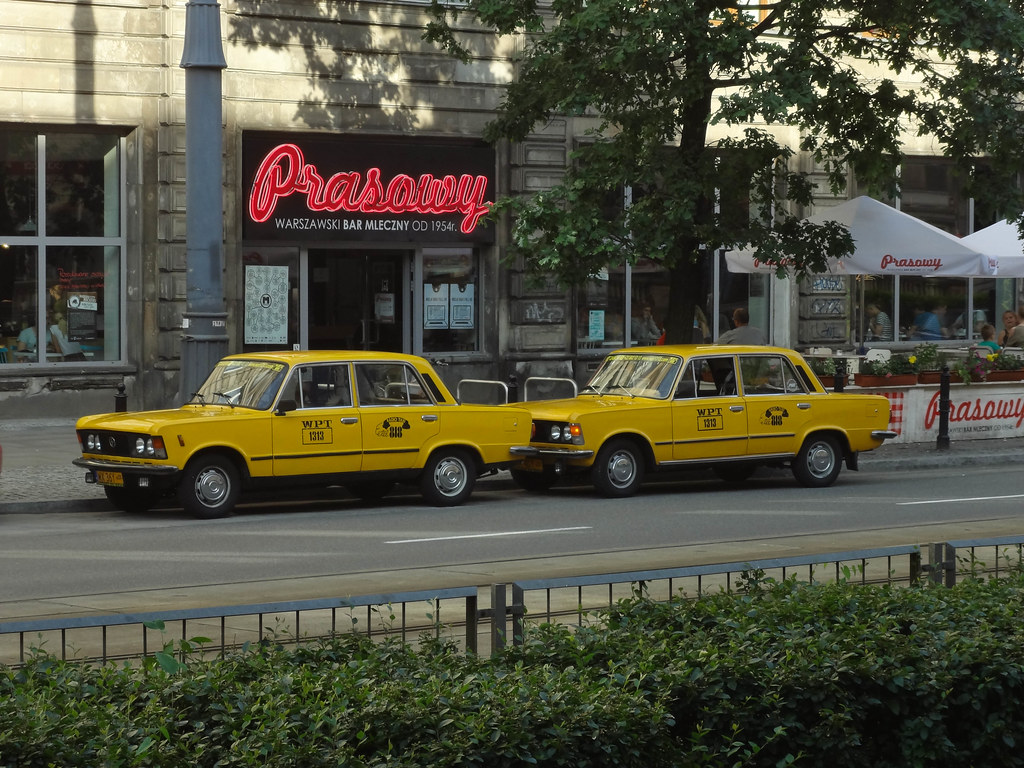 Among the best milk bars in Warsaw is Bar Prasowy (Marszałkowska 10/16). The restaurant has a history dating back over 60 years. Their most famous offering is their pierogi. These chewy Polish dumplings are filled with a variety of ingredients, from savoury meats to fruits.

The most popular varieties at Bar Prasowy include:

Ready to learn more about the tastes of Warsaw? Climb aboard a communist-era minibus for a half-day Warsaw Food Tour. On the tour, you’ll sample the city’s best Polish delicacies, including kiełbasa (sausage), bigos (meat and cabbage stew), pierogi (dumplings), ogórki kiszone (pickled cucumbers), and, for sweet-tooths, pączki (donuts).

Chill out in Łazienki Park

Now that you’ve stuffed & fuelled yourself for the journey ahead continue south along Marszałkowska. Walk to the traffic circle, swinging left towards Warsaw’s crowning greenspace, Łazienki Park. This famous park stretches out over 180 acres in the centre of Warsaw. There’s plenty of room to relax in Łazienki Park after a half day of sightseeing.

But I didn’t take you all the way down here to chill in any ordinary city park. Łazienki Park is home to palaces, museums, monuments, and orangeries begging for discovery. 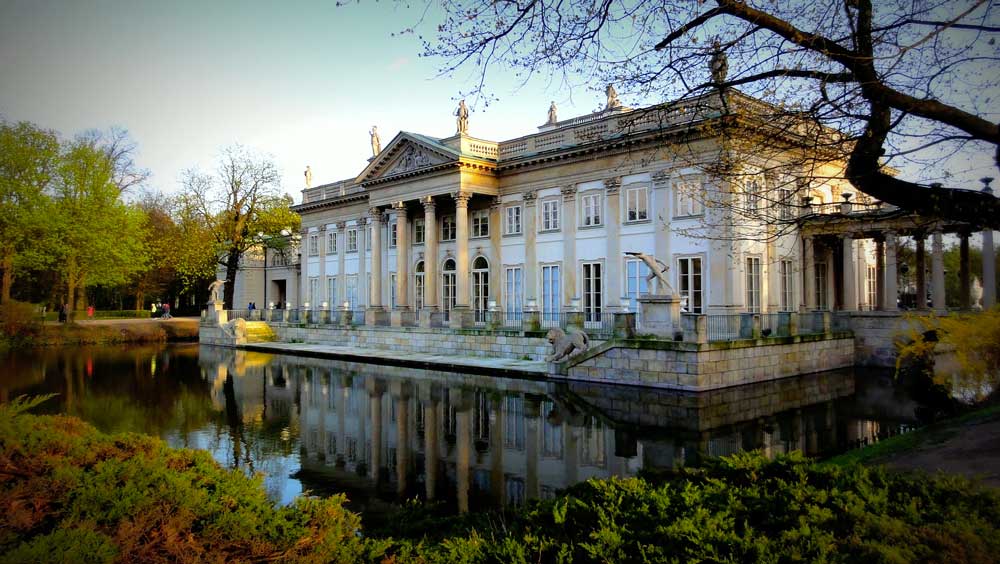 The park’s most famous site is the Palace on the Isle, a Neoclassical palace perched upon Stawy Łazienkowskie. The stunning interplay of the palace’s reflection in the waters with the surrounding greenery forms one of Warsaw’s most beautiful scenes.

Other than the Palace on the Isle, wander around Łazienki Park to check out Ujazdowski Castle (now housing the Modern Museum of Art), the New & Old Orangeries, and Belvedere Palace.

After lounging around and absorbing the sights of Łazienki Park, beeline back to the centre of Warsaw (Śródmieście), either by foot or tram, to continue your journey. 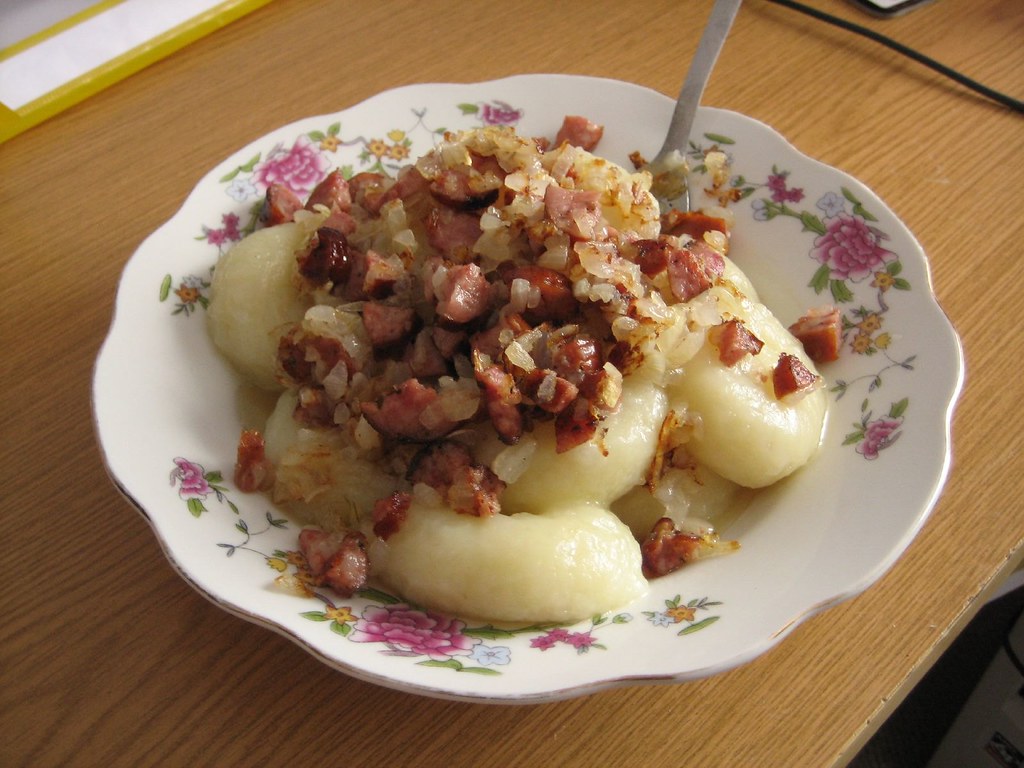 Since you’re only in Warsaw for 24 hours, there’s no better way to set the evening afoot than to grab some delectable Polish food at one of Warsaw’s best Polish restaurants. Here are a few ideas:

Once you’ve filled your belly with some delicious Polish food, hop on your feet to try out Poland’s other popular consumable: beer. There’s a long history of brewing tradition in Poland. And judging by the explosion of craft beers in Warsaw, it’s only gaining momentum.

As famous as Warsaw is for raucous nightlife, you might prefer a quieter evening at a local pub. Here are a few ideas for the best places for craft beer in Warsaw:

Is sipping on beers in a quiet pub too tame for your tastes? Head across the Vistula River from Old Town for a night in Praga. This once dilapidated and somewhat seedy neighbourhood is quickly becoming one of the hippest places in Warsaw. Praga is home to some of the city’s wildest bars & clubs.

Want to learn more about the craft beer scene in Warsaw? Hop onto a Warsaw Craft Beer Tour! Join in as a fun-loving beer-swillin’ guide takes you to the city’s hottest brewpubs to sample Warsaw’s finest ales, IPAs, lagers & stouts.

Where to stay: The best hotels for 24 hours in Warsaw

Even with the immense size of the Polish capital, deciding where to stay in Warsaw isn’t so difficult for travellers. I’d recommend staying in and around Śródmieście or Old Town in central Warsaw to get the most out of your day. Here are a couple of recommendations:

Looking to squeeze more out of your Warsaw itinerary? Here are a few of the best day tours in Warsaw:

Looking for cheap flights to Warsaw? I’d recommend searching for airfare deals on CheapOair! For my last several bookings, I’ve consistently been able to find cheaper fares here than other more well-known flight search engines like Skyscanner or Kayak.

By train: Warsaw is well-connected to the rest of Poland and other European destinations by train. Popular journeys include Krakow (2h18m), Gdansk (2h40m), and Berlin (6h23m).

How to maximize your 1-day Warsaw itinerary: Tips & tweaks 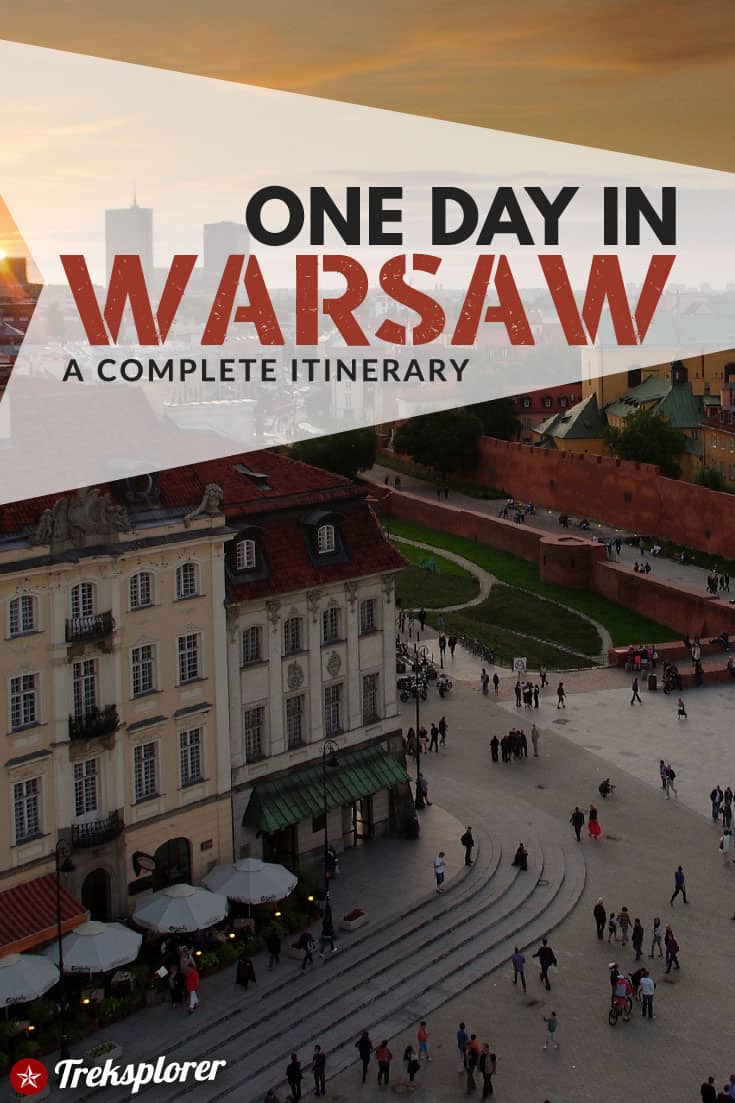