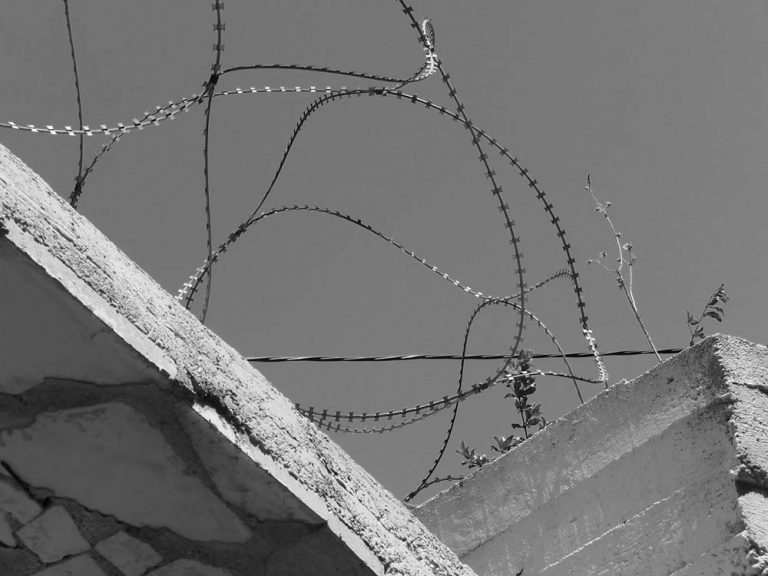 Travel changes you. And in no way do I mean to draw upon the tortured clichés of first-time backpackers, who, in light of all their newfound sensory and cultural stimulation, experience an epiphany that sets them upon an lifetime journey to fulfill some primal desire to explore.

No, it’s more complicated than that.

Beyond those initial giddy moments of stepping off a plane in a foreign land, there’s that one moment when everything changes—that instant when you see the world in a different light for the first time, bearing its teeth, scars and all.

Mine was in Bosnia & Herzegovina, in the historical town of Mostar. After descending into Mostar, you’ll never be the same—that is, if you decide to step on the other side of the frontline.

In 1992 Bosnia & Herzegovina said “do viđenja” to Yugoslavia, declaring independence from the federation it belonged to since WWII. What followed was nothing short of cataclysmic. Even for the small city of Mostar.

During the Bosnian War, the Siege of Mostar ran for 18 months, leaving in its wake destruction that a short walk over the Neretva River from Old Town sadly surges back to life. Piercing through the town centre, the Neretva divided the besieged city into two sides: on the western bank stood the Bosnian Croats; on the Eastern, the Bosniak forces; and connecting both, Old Bridge, an Ottoman-era masterpiece that captivated travellers for centuries.

That connection would soon be severed. After stitching together a city for over 400 years, Old Bridge was destroyed in 1993; it was as if the nation’s still-beating heart was violently torn from its chest. And until 2003, when reconstruction finally finished, nothing filled that void in Mostar.

You can marvel at Old Bridge’s beauty or lament its destruction, but to truly understand what the bridge stood for (and still stands for), you must cross it. Today, strolling into Mostar’s eastern quarters across Old Bridge isn’t just admiring an architectural work of art up close; it’s the genesis of an all-too real history lesson.

What you’ll find on the other side is nothing short of harrowing, a far cry from the Disneyland-esque tourist bubble of Old Town. Eastern Mostar is a living memorial to humankind’s faults at their rawest—and a chilling reminder of how far we can fall when we let animosities spiral out of control.

And this was Mostar as I first knew it.

Eastern Mostar: The other side of town

After arriving on the bus from Croatia along with a couple new travel buddies I met just days before, we received (unsurprising for the region) a random accommodation offer from our driver, Alem.

Normally, this type of thing would send my amygdala’s anxiety response into overdrive, but from the hospitality I’d experienced so far in the Balkans, I didn’t hesitate to accept the invitation.

About 10 minutes later, Alem pulled up in a semi-dilapidated K-car, stuffing our backpacks into an overstuffed truck and we piled into the backseat to ascend into the hilly northeast of Mostar to our new temporary home.

Bosnian pivo and the love of a nation

Completely ignoring any sane mother’s advice to never accept random accommodation offers from strangers, in this case, actually paid off.

After showing us around the apartment, Alem offered us each a local Bosnian pivo (beer) and ushered us to the balcony where he was, surprisingly, all-too-happy to sit and, between calm sips of beer, tell us about his beloved city and recall haunting memories of Mostar during the Bosnian War.

As we stared upon the cityscape, Alem’s recollections instantly came to life. Although it’d been decades since Mostar was engulfed in war, the reminders were all-too-real. Hollowed-out structures and bullet-marked stucco façades still marked the streets around us.

After enduring months of fighting, Alem explained with stunning composure that he faced a tough dilemma: Either he could stay & fight or keep his family safe. When it became painfully clear that the latter was simply no longer possible, he did what once seemed unthinkable and escaped Bosnia for Germany.

When asked why he stayed so long before finding refuge, Alem explained it quite simply: He loved his city and he loved his country. He wanted to raise his family in Bosnia and live out his last days in Mostar. This was home.

To love a place enough to endure such tough times—I couldn’t fathom it. As much as I adore my homeland of Canada, I could never imagine sticking around while the shit completely hits the fan all around me.

(My stomach is weak enough that my one (and only) partridge-hunting expedition completely traumatized me. I’m quite sure that defending myself against an onslaught of soldiers, whose only mission was to raze my neighbourhood, would be just slightly more psychologically damaging. Needless to say, it’s doubtful that I would stick around for very long.)

There’s something genuinely disturbing about visiting former war zones. And it’s not just because signs of death—abandoned buildings, bullet-punched barriers, or uncleared minefields—surround you, but that life seems to go on completely unfazed by what’s all around and what’s once happened.

A recent war zone is like a cemetery for the living, a rare place where a lost past, an unsettled present, and a future that could have been all collide. 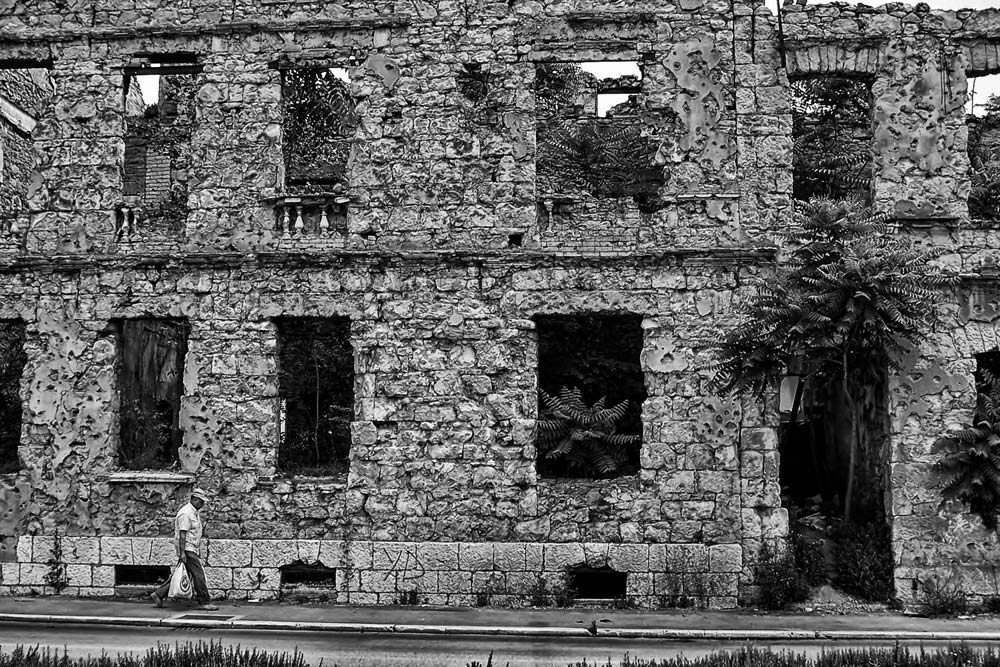 Earlier today as I scrolled through my (poorly-exposed) photos of Mostar, I was immediately grasped by the first: a former family home, edifice punctured by a massive hole, optimistically revealing in a swell of sunlight red-roofed homes clinging to the hillside in the distance.

Derelict buildings in Eastern Europe aren’t rare enough to be noticed, but this wasn’t the usual farmhouse falling apart from decades of neglect: the destruction was deliberate, coldly calculated. If walls could speak, I’m not sure I’d would have been fully prepared then—or now—to hear what they’d have to say. 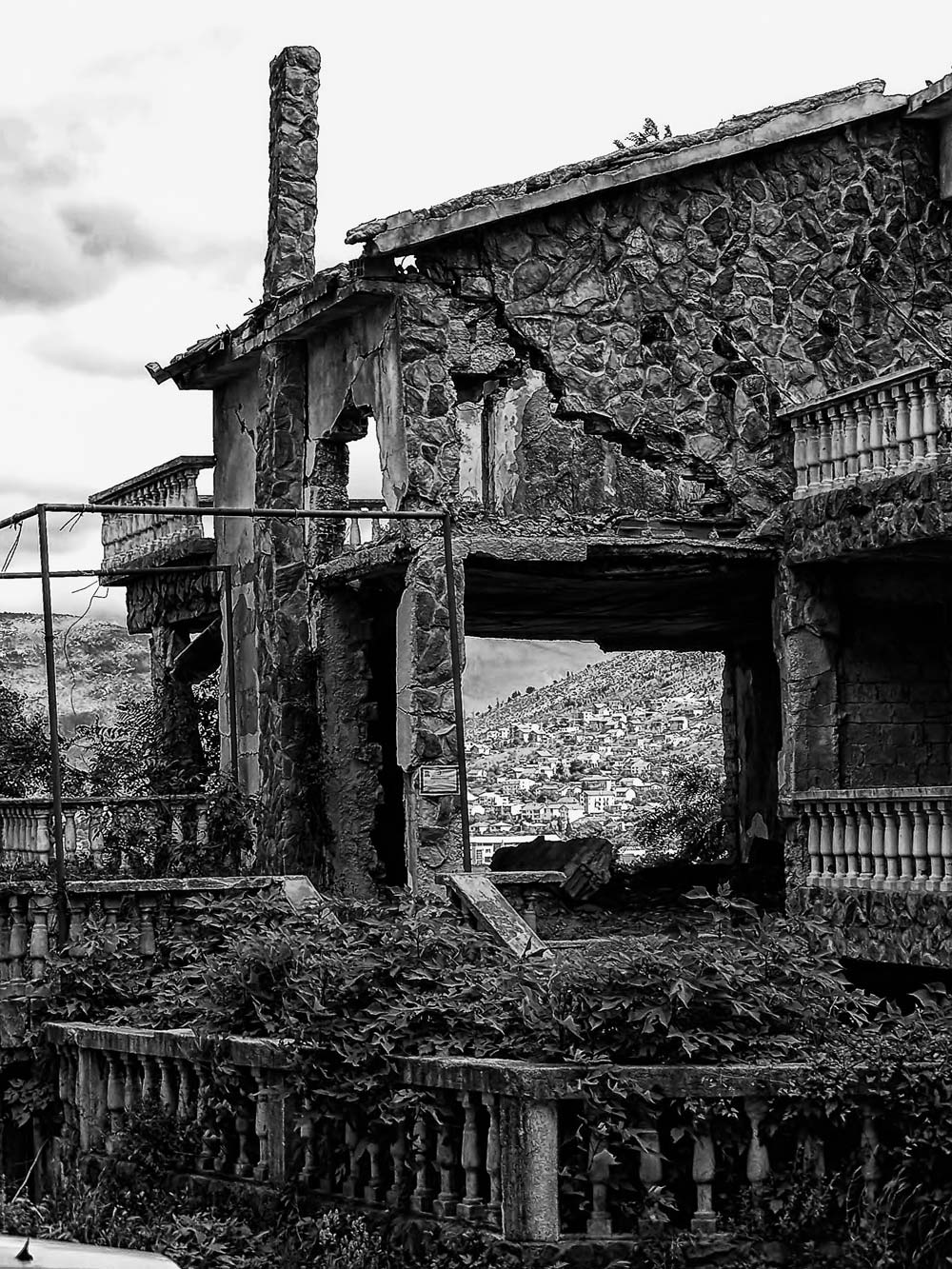 The final curtain call; Or, how everything changed

I descended the hilly neighbourhood streets towards Old Town, never quite escaping the grim reminders of Mostar’s storied past.

Along the way I struck up a conversation with an older gentleman, who in Slavic-accented German explained that he stayed in Mostar throughout the siege, fighting alongside the Bosniaks to keep their enemies from pushing west. As he pointed to houses in various states of disrepair, he frankly reminisced of family and friends lost during the siege, a fact he’d clearly come to grips with long ago given his ease.

That day, I learned something: life could be worse. Much worse.

Any personal problem I could imagine pales in comparison to what the people of Mostar dealt with daily in the ’90s. Even after listening to tragic war stories all around the Balkans, I’m not convinced I’m any closer to understanding what these brave men, women, and children withstood throughout those grim years

Whether we learn from their sorrows or through their resilience, the importance is that we simply learn—learn to respect, learn to forgive, learn to appreciate, and most of all, learn to live every day as if it’s our last.

Mostar occupies a convenient located between Dubrovnik and Sarajevo, making it a convenient (and must-visit) stop on any Balkans itinerary.

From Sarajevo: From the Bosnian capital, it’s a scenic two-hour train trip to Mostar. (Despite being one of the top Sarajevo day trips, I’d recommend spending at least two days here to soak up the full experience.)

From Dubrovnik: From the jewel of the Dalmatian Coast in Croatia, it’s approximately 2.5 hours driving distance to Mostar. Buses along this route, however, are quite slow, taking as long as 4 hours. Instead of trying to fit the city in as a quick day trip from Dubrovnik, I’d recommend spending a little time here, either on route to Sarajevo or as its own two-day side trip if it’s your only stop in Bosnia & Herzegovina.