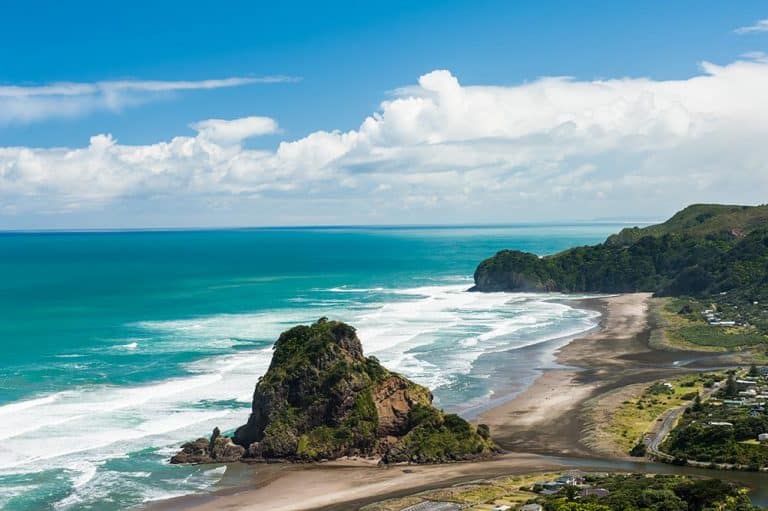 Craving a seaside escape from Auckland, New Zealand? Whisk away to rugged west coast of New Zealand North Island with a visit to Piha Beach!

For locals and visitors alike, Piha Beach has become one of Auckland’s most popular beaches. It’s particularly in vogue among Kiwi surfers thanks to its powerful swells.

But there’s more to this black-sand beach than surfing its waters. Piha Beach sits on the edge of Waitakere Ranges Regional Park, one of Auckland’s premier outdoor destinations. Within minutes of the beach & village, you’ll stumble upon some of Auckland’s best walks. The tracks sweep between native forest and coastal cliffs with views like none other in Auckland.

Ready to plan the ultimate day trip to Piha Beach? Get started with this complete Piha Beach guide including what to see & do and how to get there…

Things to do in Piha

It would be silly to guide for things to do in Piha with anything but the main attraction: Piha Beach itself! The black sand beach is one of the most famous among Auckland’s west coast beaches. It’s a hotspot for surfers who love taking to the shores to experience some of the best surfing around the Auckland area.

As you know, one of the best seasons of the year to visit New Zealand is summer. And this is when Piha Beach shines. It’s the prime time of year to experience the scenery and the beach’s summertime buzz. (If you’re looking for a quieter scene, you’ll want to look for beaches elsewhere on the west coast like Karekare Beach.) 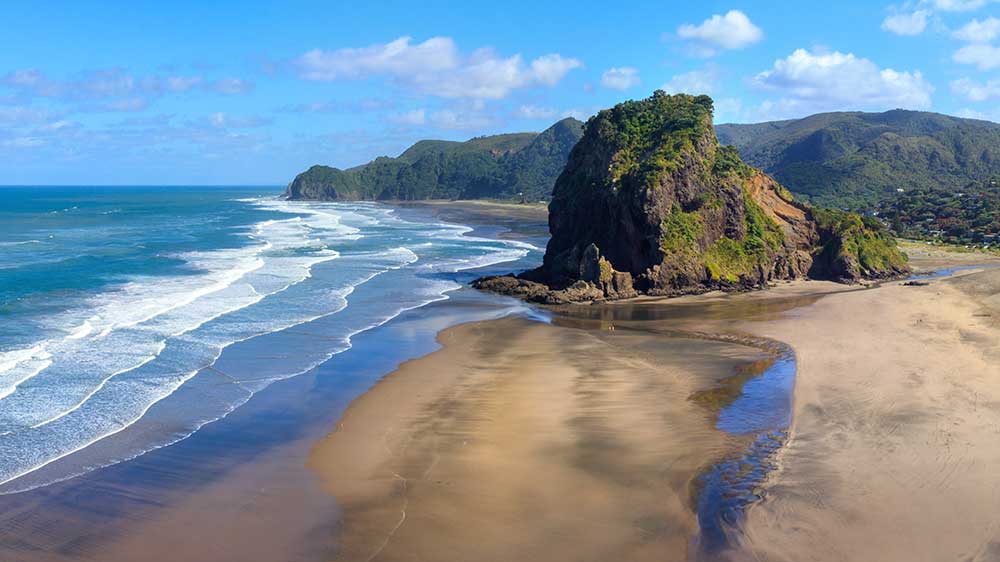 PRO TIP: Interested in learning how to surf? Join in on a Piha Beach Group Surf Lesson from the Piha Surf Academy!

Although Piha Beach is mondo popular with local surfers, much it is not suitable for swimming. (Like other popular west coast beaches including Muriwai Beach and Bethells Beach, the waves & the surf here is strong. With a capital S.)

In summer, there are, however, lifeguards on duty. Don’t make them work any harder than they have to. Stick to the designated swimming areas and heed conditions.

Even if water activities aren’t your thing, there’s plenty of other things to see & do around Piha Beach. The black-sand beach is tagged by rugged coastal cliffs on either end. As you’d expect, there’s a barrage of hiking & walking tracks nearby including to the beach’s famous Lion Rock. Read on…

Piha Beach’s most prominent feature is Lion Rock, also known as Te Piha. It juts up from the Tasman Sea near the mouth of Piha Stream, separating the north and south sides of the beach.

Lion Rock isn’t just a stunning natural attraction. It’s a sacred spiritual site for the Te Kawerau a Maki people who once lived in the area. The rock was also once home to an important Maori pa (fortress) called Whakaari. You’ll still find remnants of the pa’s old terraces and pits on your way up. 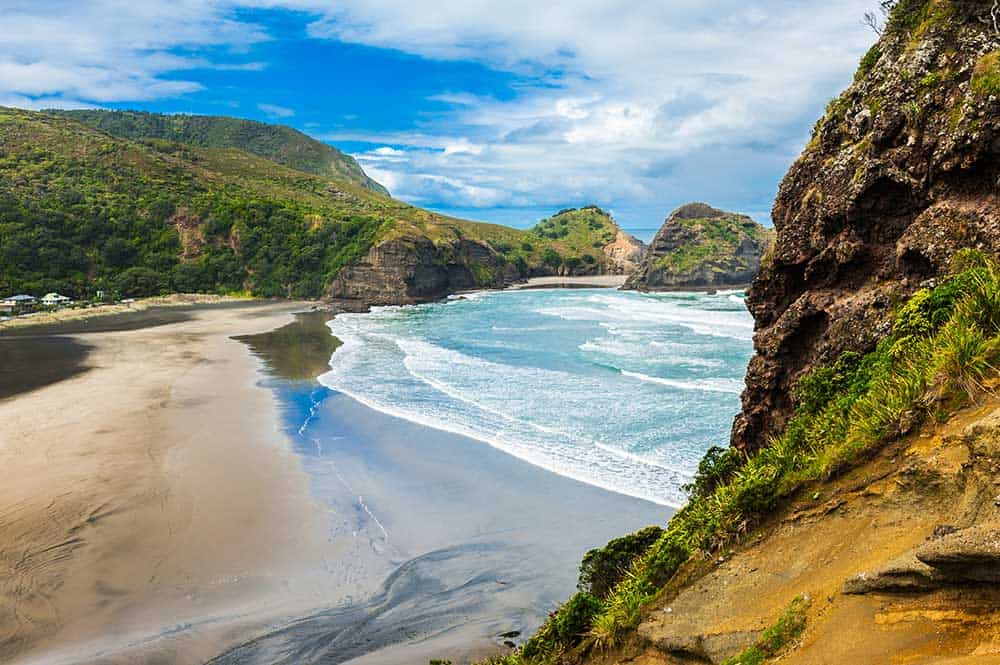 To be sure, the climb up Lion Rock isn’t easy. The first section is steep and moderately challenging. After reaching the stairs though, most reasonably fit hikers should have no problem finishing the ascent.

On you get to the top, you’ll enjoy fantastic 360-degree views. They swoop over the bay, the coastline, and to the native forests & mountains of the Waitakere Ranges.

PRO TIP: Be sure to watch your step on the climb and the summit of Lion Rock. The hike can be dangerous in certain weather conditions when rocks become loose and slippery. (Tragically, several people have died and been seriously injured from falling here.)

Not far from Piha Beach you’ll discover the spectacular Kitekite Falls. The waterfalls are accessible via the Kitekite Falls Path, an easy nature walk starting at the end of Glen Esk Road.

Completing the walking track, you’ll land at the beautiful Kitekite Falls. The waterfalls cascade 40 metres over six distinct drops. The water volume isn’t huge, but the tiers add plenty of drama to the scene at Kitekite Falls. 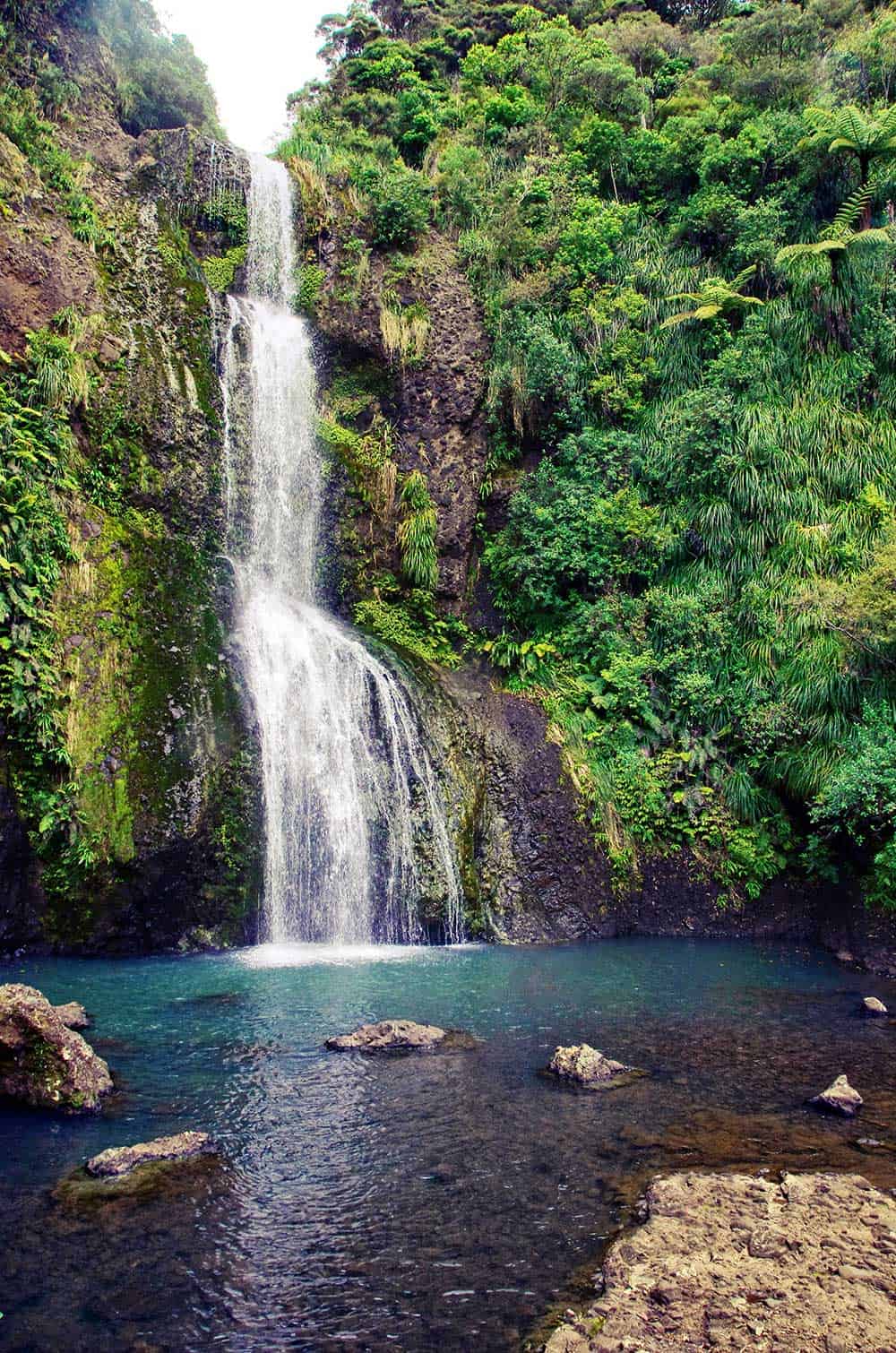 At the bottom of the falls lies a large pool. It’s a great place for a relaxed swim if the muscular currents of Piha Beach don’t tickle your fancy. From off the main track, you can also access other swimming pools at the bottom of the different tiers.

Point-to-point, the trail to Kitekite Falls is about 2.75 kilometres. For most hikers, it should take less than an hour each way.

PRO TIP: Searching for New Zealand’s most beautiful waterfalls? Head south of Piha to Karekare. Falling 20 metres, Karekare Falls are among the area’s most scenic. The area is also home to Karekare Beach. It’s a famous New Zealand filming location thanks to its remote edge-of-the-world feel.

Looking for more epic views? Venture south of Piha Beach to trek along the Tasman Lookout Track. The walk to the viewpoint is short but sweet. On the 20-minute walk, you’ll scoot up a native forest to the clifftop where you’ll find the lookout.

At the trail’s apex, you’ll, unsurprisingly, enjoy stunning vistas over Auckland’s western coastline. Stay on top for a while to rest your weary legs and delight in the scenery. Don’t forget your camera!

Of all the walks around Piha, none delivers simpler pleasures than the Piha Beach Lookout. Reaching the lookout point on this short walk, you’ll get sweeping views over the beach and towards Lion Rock. 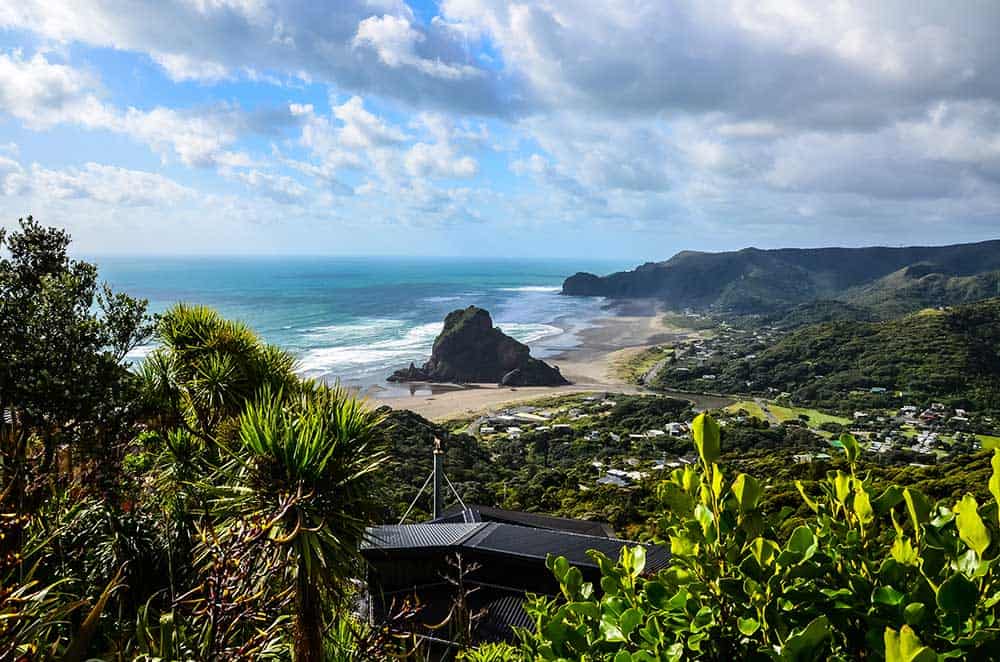 The trailhead for the Piha Beach Lookout is situated off of Piha Road. If you’re driving from Auckland, you’ll see the lookout’s parking lot about 2.6 kilometres before reaching the village.

Want to escape the crowds? Explore one of the many walking trails near North Piha Beach. There’s a handful of great bush walks here, traversing the lush coastal forest. 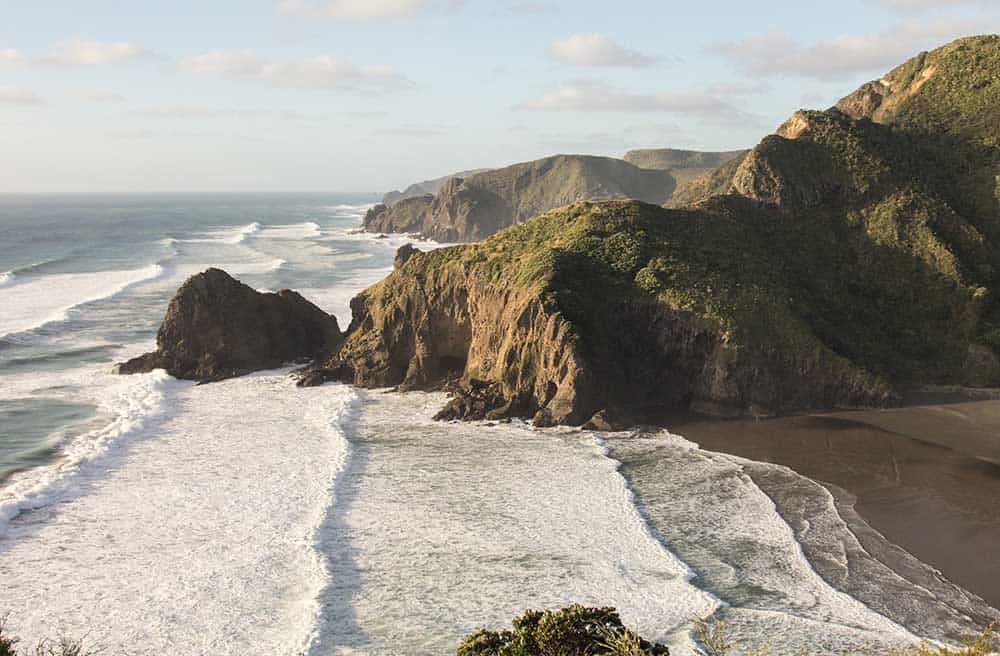 Want to take your hike to the next level? Finish it off with a trek down to Whites Beach. This side-track is challenging and should only be attempted by experienced trampers. If you tough it out, you’ll be treated to a quiet & secluded slice of nature that’s increasingly rare in these parts!

Where to stay in Piha Beach

There’s only a handful of choices for accommodation in Piha Beach. Most of the options in the area are B&B-style homestays and private beach houses. If you’re travelling to Piha Beach in summer, book ahead. It’s a popular time to visit for locals.

How to get there

Piha is located about 40 kilometres from Auckland. From the Auckland city centre, it’s about a 45-minute drive to Piha via Waitakere Ranges Regional Park.

There’s no regular public transportation to Piha from Auckland. If you don’t have your own car, you’ll have to rent a car in Auckland. Alternatively, you could book yourself onto a guided day tour to Piha. The Piha Adventure Tour and Piha Beach Day Trip are two great options.