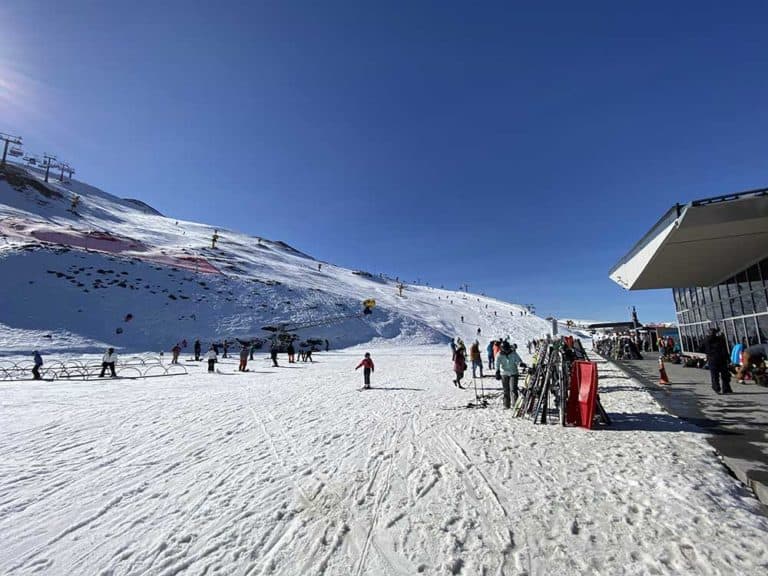 Visiting New Zealand in winter? Add some cool weather fun into your South Island itinerary with a Queenstown skiing adventure. Located in the Southern Alps on South Island, Queenstown is the most famous skiing destination in New Zealand. The top Queenstown ski fields—Cardrona, The Remarkables, Coronet Peak, and Treble Cone—are some of the country’s best.

Ready to embrace the winter season? Hit the slopes with this complete guide to skiing in Queenstown.

Cardrona Alpine Resort sits between Queenstown and Wanaka in the Cardona Valley. The family-friendly ski resort is a wonderful option for skiiers & snowboarders of all skill levels. Thanks to the high elevation, the snow conditions at Cardrona are among the region’s best. 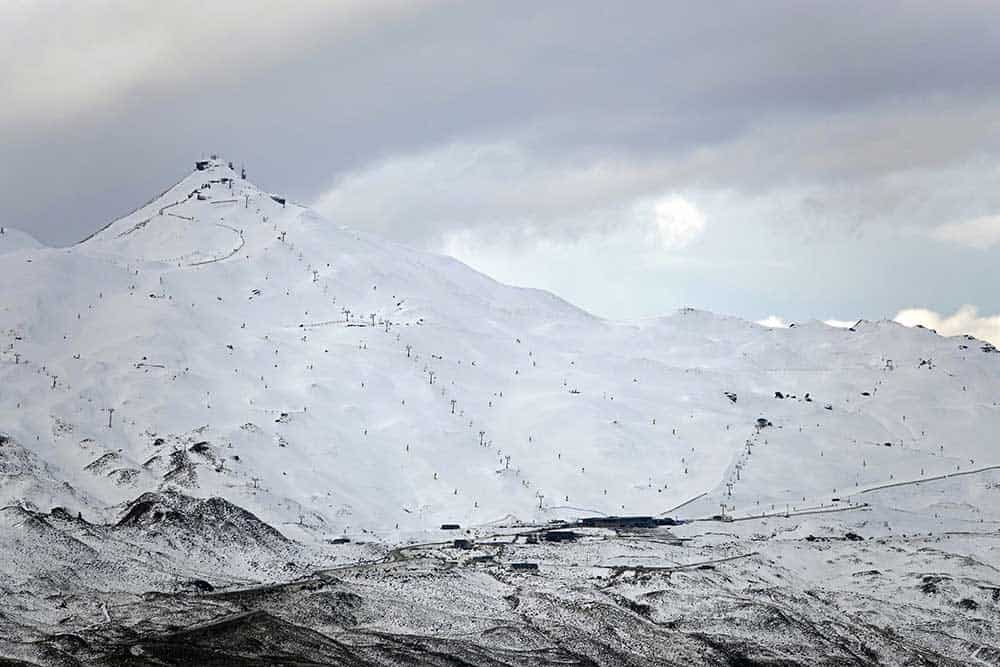 Besides its wide-open pistes, Cardrona Alpine Resort is home to the most extensive terrain park in the Southern Hemisphere. Adventurers will love choosing between 4 terrain parks, dual half pipes, and a cross course.

The resort also has plenty of amenities for extended stays. There’s 8 different cafés on site along with on-mountain accommodation for those wanting to spend the night.

How to get to Cardrona Alpine Resort

Cardona Alpine Resort is about 30 minutes from Wanaka and about one hour from Queenstown by car. During both the winter & summer months, daily shuttle run between Wanaka and Queenstown to Cardrona.

Located just 20 minutes from Queenstown, Coronet Peak Ski Area is the closest ski field to town. Coronet Peak is most famous for its roller coaster ski terrain mixed with epic views over the Lake Wakatipu basin. 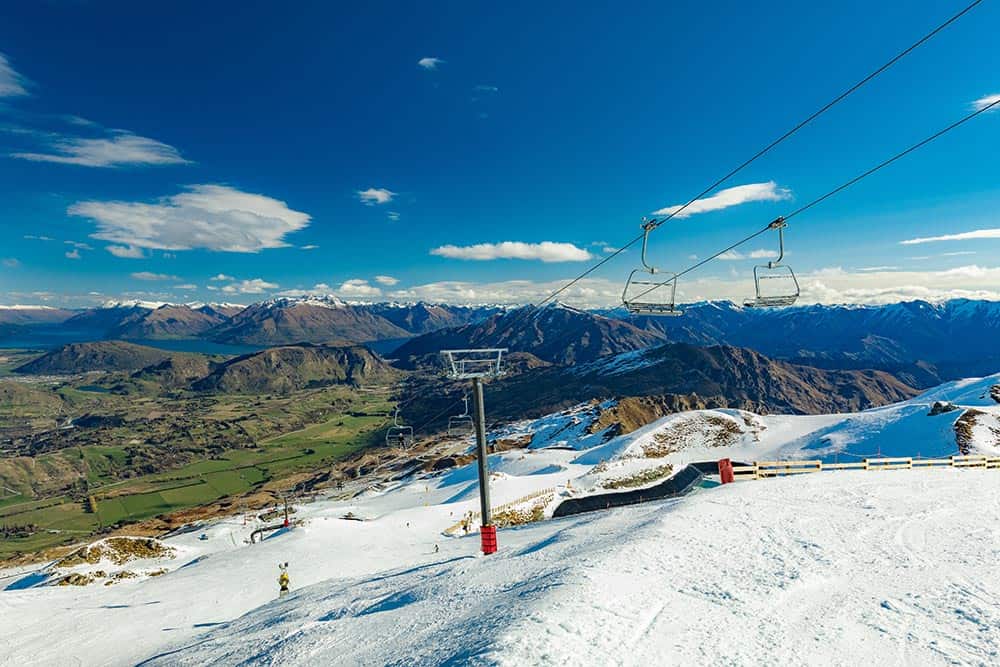 The wide-open slopes at Coronet Peak are perfect for skiers & snowboarders of all skill levels. The 280 hectares of terrain is varied. There’s never a dull moment hitting the pistes here!

One of the unique features of Coronet Peak is its Night Ski. From 4pm to 9pm on Wednesdays and Fridays, enjoy a sunset over the basin before carving the slopes under the flood lights. Cap the evening off with a drink and great company in one of the resort’s bars.

How to get to Coronet Peak

Coronet Peak is a quick 20-minute drive from central Queenstown. Snowline Express runs daily buses from the Snow Centre to the resort ($20 return).

With over 350 hectares of terrain, The Remarkables Ski Area is a nirvana for winter sports enthusiasts. The resort features three sunny north-facing bowls. The trio offers perfect slopes for beginners and advanced skiers & boarders alike. 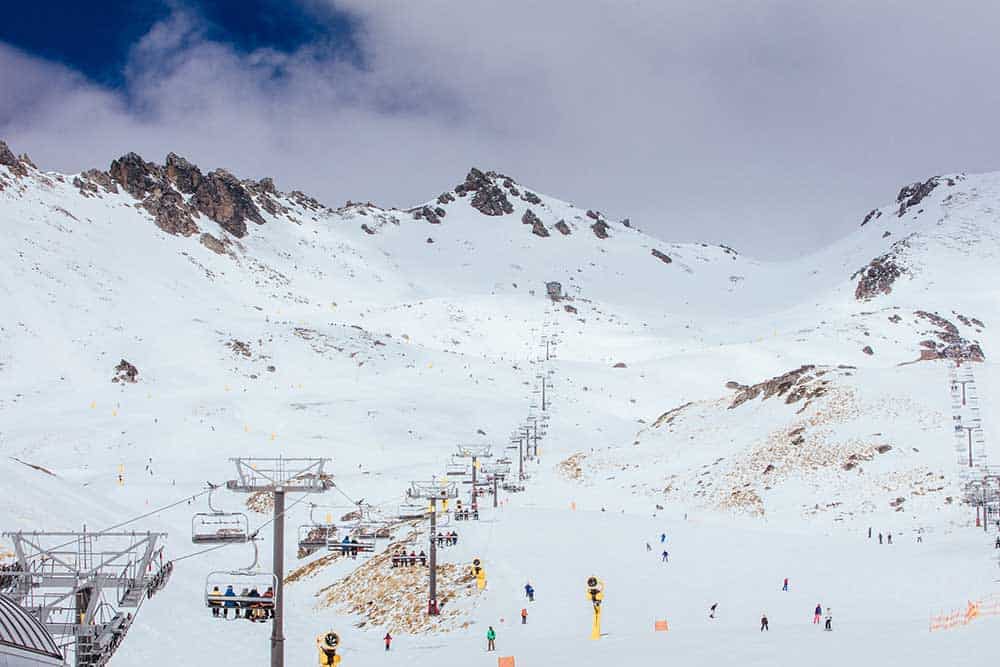 For extra adventure, set your sights on the resort’s extensive freestyle areas. Among the seven parks at The Remarkables, you can test your snow skills on the only Burton Stash terrain park in the Southern Hemisphere.

How to get to The Remarkables

The Remarkables Ski Area is a 40 minutes drive from Queenstown. The Snowline Express runs a shuttle bus between the Queenstown Snow Centre and the resort. The cost of the return journey is $20.

While closer to Wanaka, Treble Cone is one of the best places in the Queenstown area to hammer out some winter fun. Treble Cone is the largest ski field in New Zealand South Island. Skiing among its spectacular views over the Southern Alps and Lake Wanaka will be unforgettable for your winter getaway. 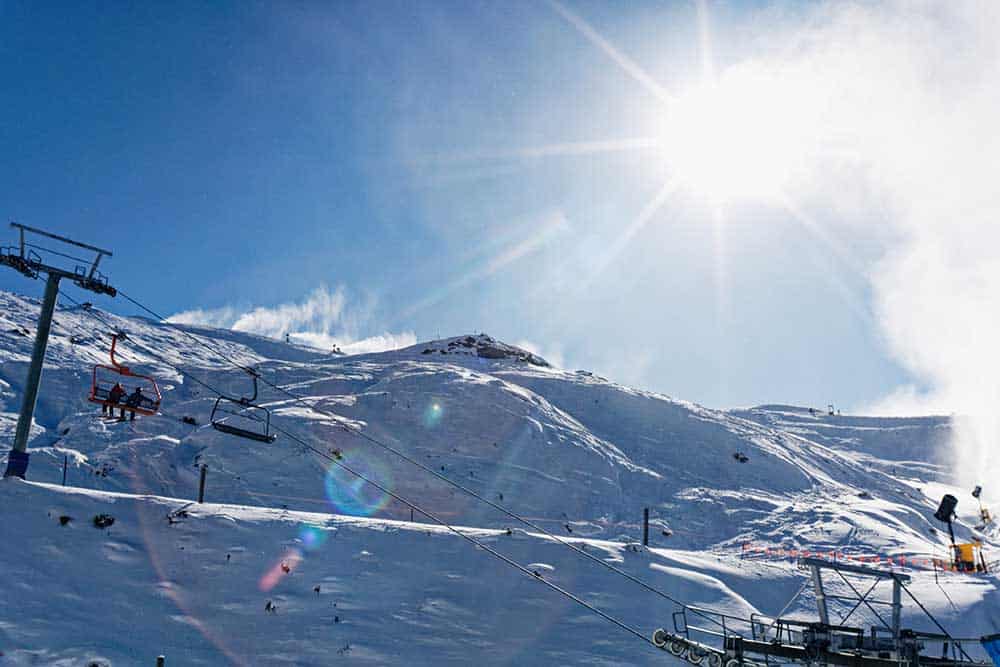 With its 700-metre vertical, Treble Cone offers some of New Zealand’s longest groomed trails and best off-piste skiing. If you’re lacking the chops, the resort also has a fleet of instructors to send your ski & snowboard skills to the next level.

How to get to Treble Cone

Treble Cone is a scenic 35-minute drive from Wanaka. There’s also a free shuttle bus from Wanaka departing twice daily to the resort.

When to go skiing in Queenstown

The Queenstown ski season runs between late June to October. The actual opening and closing times of the resorts depends on snowfall in the area.

The peak weeks of ski season often fall in July. It’s the busiest time of year on the slopes. Book your Queenstown accommodation well in advance to avoid disappointment.