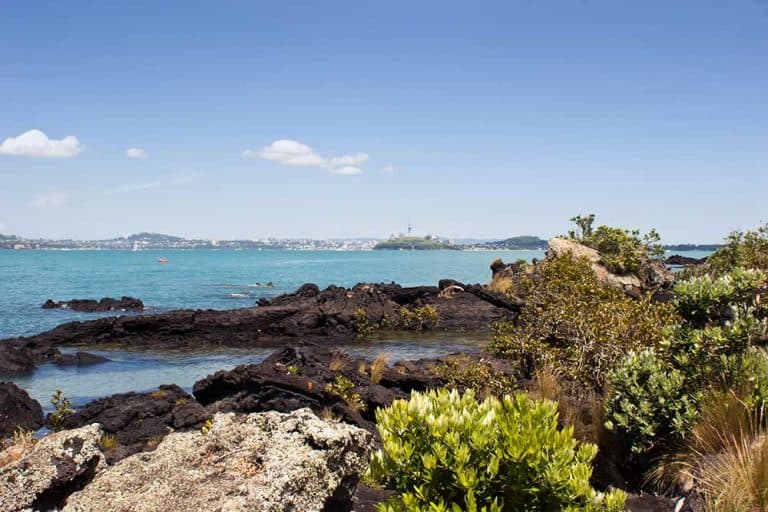 No trip to New Zealand is complete without visiting Rangitoto Island. The volcanic island is one of the best day trips from Auckland and a must-see for any Auckland itinerary.

Rangitoto Island lies eight kilometres southeast of central Auckland in the Hauraki Gulf. Even closer is Devonport in North Shore district, located only a few kilometres to the east.

This unique island is one of the Auckland’s most iconic natural landmarks. From many of the city’s coastal hotspots, you’ll catch a glimpse of Rangitoto Island in the distance.

For outdoor adventure, Rangitoto Island is among the best places to visit in Auckland. The island is crossed with inland & coastal walking tracks. Whether from its shores or summit, you’ll revel in amazing views of the city and the sea.

In the 48-strong family of Auckland volcanoes, Rangitoto Island is the late-bloomer. Although formed “only” 600 years ago, the island’s volcanic cone is the youngest in New Zealand. It’s also the highest cone in the Auckland area. It measures an astounding 260 metres high and spills 5.5 kilometres across.

What to see & do on Rangitoto Island

Whether you’re visiting solo, as a couple, or with a family, there are plenty of fun activities & things to do on Rangitoto Island on a day trip.

As you roam around the island, you’ll find everything from hiking trails & walking tracks to beautiful beaches. The island is also home to the world’s largest Pohutukawa forest.

Not sure what to do on Rangitoto Island? Get started with these top activities & sightseeing ideas…

If you only have time for one activity on your Rangitoto day trip, make it the Rangitoto Summit Track. This walking track is one of the best hikes & walks in Auckland. The trail ascends from Rangitoto Wharf to the volcano’s summit.

At a relaxed pace, the walk to summit should take you about an hour. When you reach the top, marvel at the volcano’s distinctive crater and swoon over the incredible 360-degree panoramic views. Auckland City, Waitemata Harbour, and the Hauraki Gulf will all flood into view.

On a clear day, you’ll see as far as the Waitakere Ranges along the west coast. To the east, look out for Waiheke Island. You may also see the Hunua Ranges, southeast of Auckland, off in the distance. 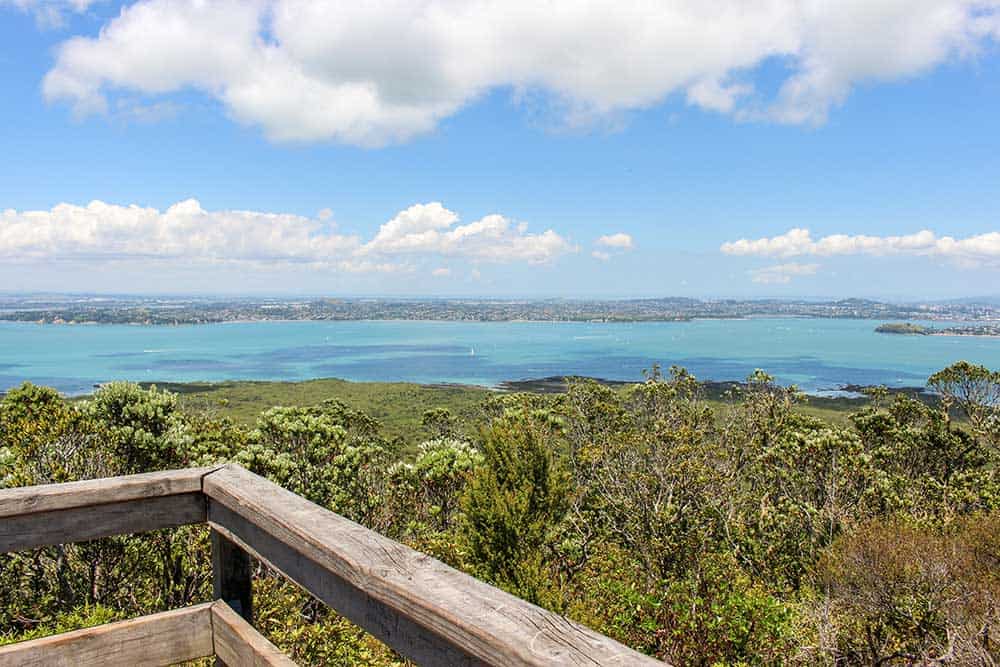 On the way up, there’s also an opportunity for a quick detour to the island’s lava caves & tunnels. Don’t forget to pack a flashlight if you’d like to take a peek inside!

Not keen on the climb and still want to check the amazing views from the summit? Don’t fret. There’s a popular Auckland Explorer 4WD road train guided tour (with commentary). The tour will scoot you up to the top without a hitch.

For hikers needing a longer walk, grab your hiking shoes and tackle the Coastal Track. Starting at Rangitoto Wharf, this walking trail crawls alongside rugged lava fields on the southern shore. It also treks through the island’s forested interior to Islington Bay Wharf.

Along the way, you’ll encounter beautiful coastal and forest views. There are also several historical sites on route. Look out for baches (traditional New Zealand beach houses), quarries, and mine storage bases. You’ll also stumble upon the WWII-era Yankee Wharf on the way. 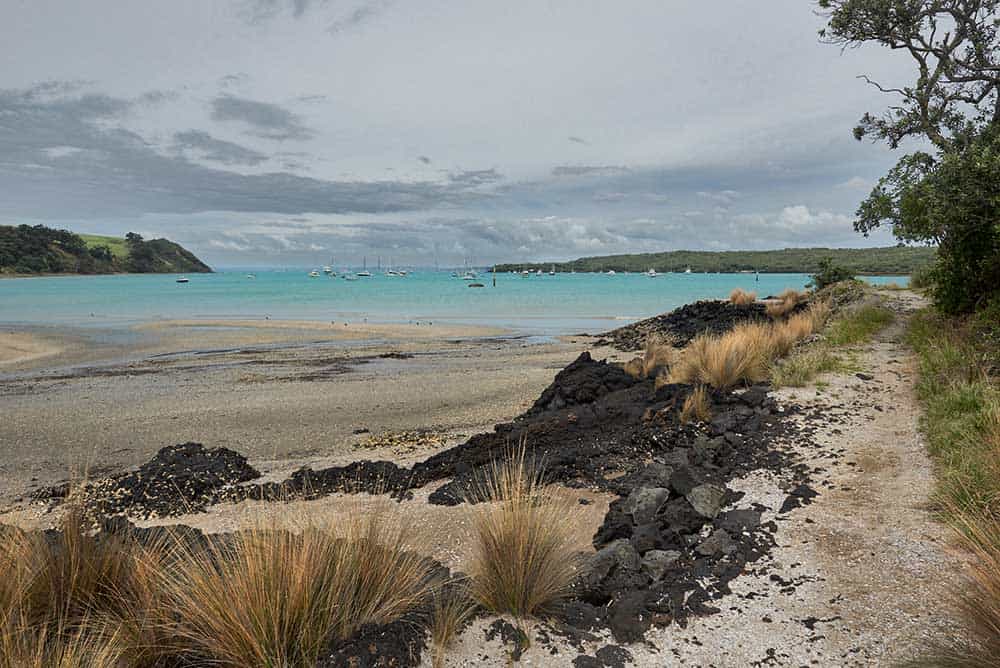 At the end of the trail, you’ll land upon Islington Bay Wharf. The wharf offers some limited facilities including washrooms and a picnic area.

From Islington Bay Wharf, there are a few options. You can continue east to Motupapu Island. The island is accessible via the small causeway. It’s a great place to explore history with its WWII-era bunkers, tunnels, and gun emplacements. You can also head north towards Boulder Bay or return to the wharf for your ferry ride home.

Hiking the Coastal Track should take approximately two and half hours each way.

PRO TIP: Sections of the Coastal Track traverse over jagged lava fields. You’ll want to make sure you wear durable footwear for the trek.

Boulder Bay & Wreck Bay are situated on the north side of this Hauraki Gulf island. They offer an interesting alternative to the classic Rangitoto walking trails.

The Wreck Bay Track is approximately one-hour long. It begins off of Islington Bay Road. From here, it heads northward to the coastline at Wreck Bay and the adjacent Boulder Bay.

These two bays are infamous for being a former ship graveyard. Between 1887 and 1947, several ships were left along the shorelines to rot. If you visit at low tide, you should have no problem spotting the shipwrecks!

Already tackled the summit? Another alternative walking route is the coastal road to McKenzie Bay.

Located on the island’s eastern shores, this bay is home to a historical lighthouse and one of only two sand beaches on Rangitoto Island. If you need a place to cool down in the lovely waters of the Hauraki Gulf after a long day of hiking, this is your chance! 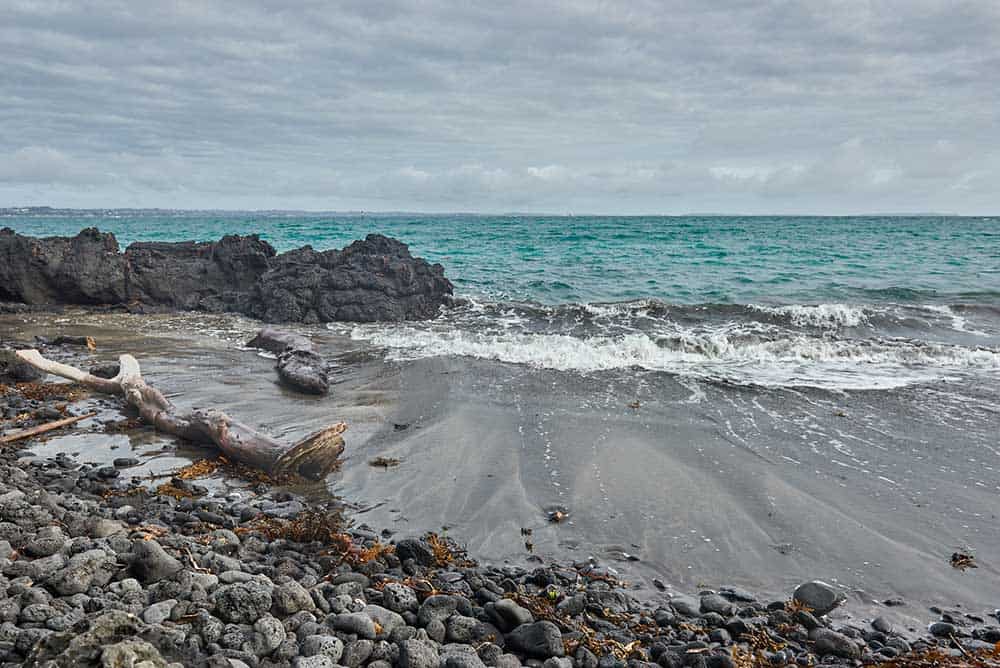 From Rangitoto Wharf, it’s 2 hours and 30 minutes to walk to McKenzie Bay. Travelling west along the Summit Road from the peak, it’s about 3 hours and 45 minutes by foot.

Although only a few steps east of Rangitoto, Motutapu Island feels like a different world. Crossing the short causeway, jagged volcanic fields transform into rolling green pastures. The change is shocking to say the least!

You’d be hard-pressed to fit in both Rangitoto and Motutapu in a single day. A better plan is to set aside a day to focus on this smaller pest-free island. Motutapu Island is a rewarding experience on its own. 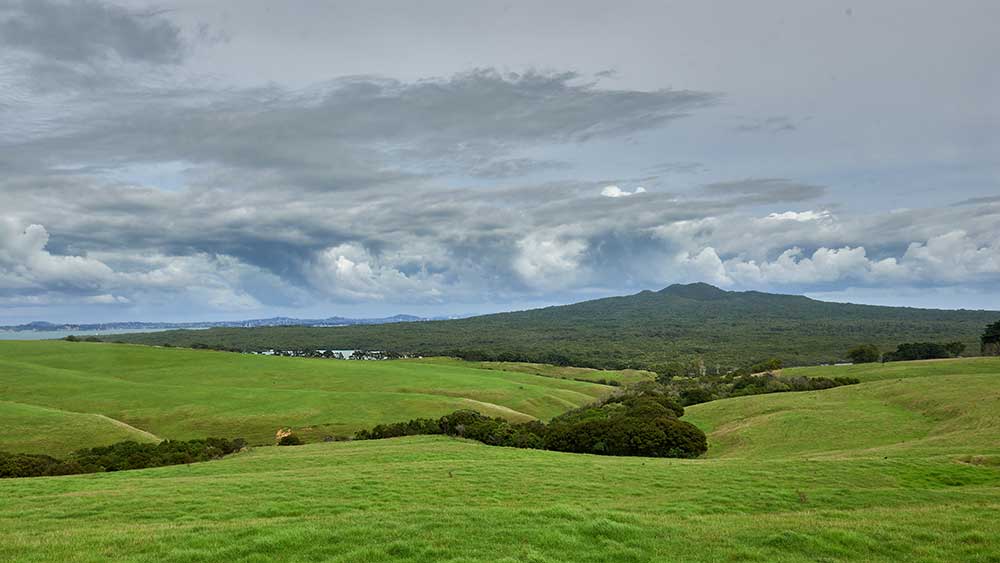 The classic route between Rangitoto Island and Home Bay in Motutapu crosses much of the small island. It will take about 1 hour and 30 minutes to complete.

The current sailing times (as of October 2020) from the Auckland Ferry Terminal on Quay Street in central Auckland are 9:15 am and 10:30 am. There’s an extra sailing on Saturdays, Sundays, and public holidays at 1:30 pm. Only the 9:15 am departures stop in Devonport. You can check the latest ferry schedules on Fullers 360 official website here. 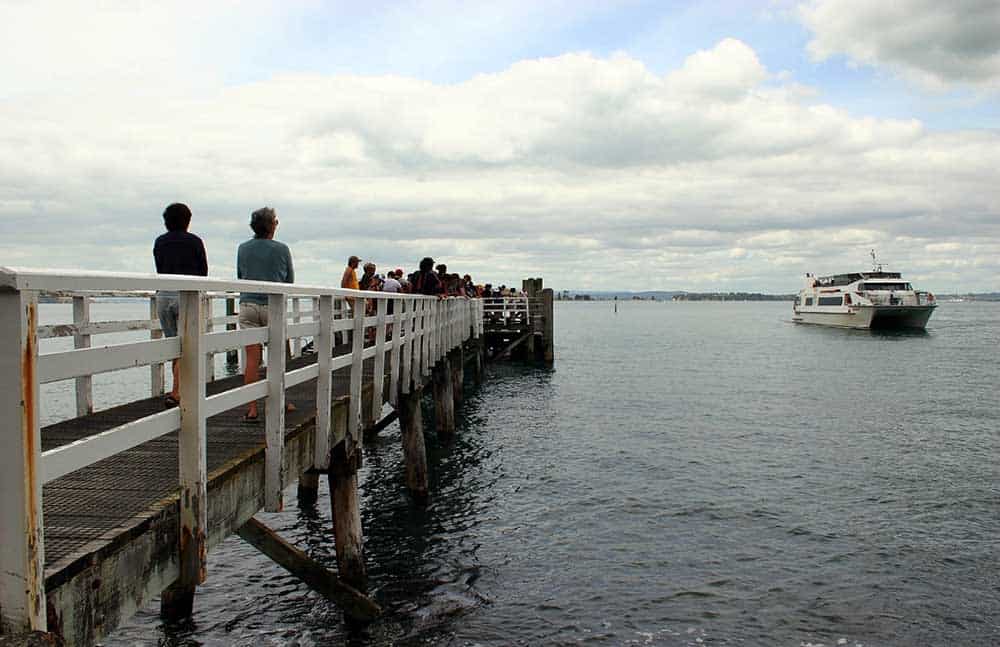 PRO TIP: Avoid the queues and save time at the ferry terminal by booking your Auckland-Rangitoto Roundtrip Ferry Pass online.