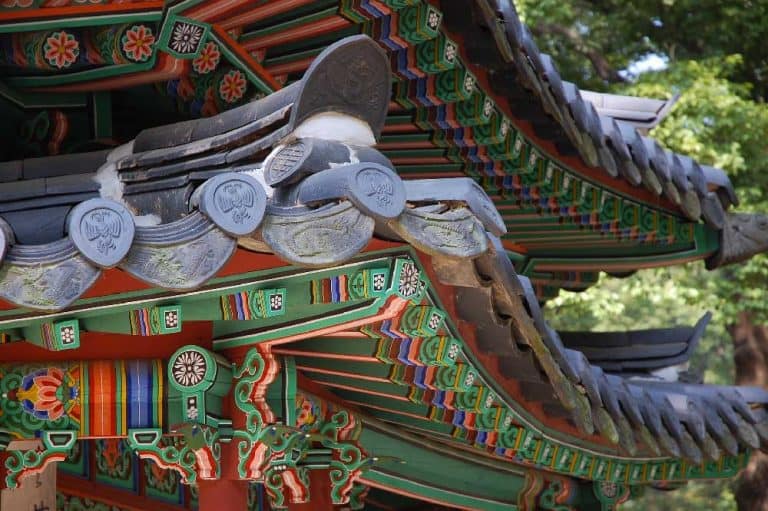 Need convincing that South Korea’s capital is worth visiting? Let the incredible palaces of Seoul do the talking. Seoul’s beautiful palaces hide among its skyscrapers, shopping malls, and markets. These unmissable historic relics unfold a whimsical world spiked with tradition & beauty.

The grand palaces of Seoul offers a rare glimpse of the city’s ancient history. At the surface, Seoul never seems to stop peering forward. Visiting these architectural masterpieces, we discover that it’s not always true. Among them, you’ll uncover Seoul’s best preserved traditional Korean architecture. Many of the complexes are even set to jaw-dropping natural backdrops that’ll leave you in awe.

Not sure where to start exploring? Here are six of the best Seoul palaces to visit…

Looking for more ideas for your trip? Check out our Seoul Travel Guide for more recommendations on when to visit, where to go & what to do!

The Five Grand Palaces of Seoul

Need a primer? Start with the Five Grand Palaces of Seoul. All five hail from the Joseon Dynasty. Starting in 1392, this prosperous era in Korean history lasted for over five centuries. 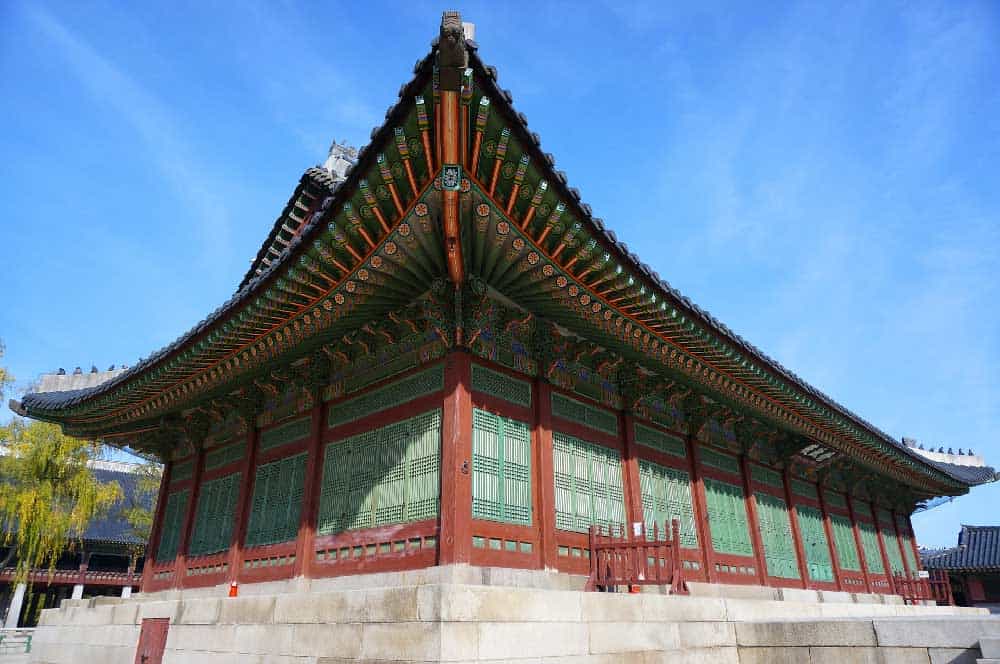 The palaces have endured a tumultuous history. From getting gutted by fires to destruction by Japanese invaders, they’ve seen it all. Their resilience had made them all the more important to the history of Seoul and South Korea. What you’ll see today are mostly reconstructions. But the renovations remain faithful to palaces’ original spirits.

With just 24 hours in Seoul, you’d be hard-pressed to visit all five grand palaces and give them their due time. Over the course of a couple days though, you’ll have no problem experiencing them to their fullest. All the while, you’ll still have time to dig into many of the other top places to visit in Seoul.

Want to visit Seoul palaces without hassle? The Seoul Hop-On Hop-Off Downtown Palace Course stops directly at the 4 most popular of the five grand Seoul palaces. You can also stop at other top Seoul destinations like Myeongdong, Insadong, and N Seoul Tower.

If you’ve only got time to visit one of the grand palaces, make it Gyeongbokgung Palace. This immense complex is one of the country’s most historically-significant. It dates back to the twilight of the 14th century when King Taejo built it as his main royal seat.

Gyeongbokgung means “Palace Greatly Blessed by Heaven.” It stood unchallenged for about two centuries until the Japanese ransacked it. The invaders left the palace in total ruin. It wasn’t until the 1800s that efforts began to rebuild it.

Unfortunately, history was unkind to Gyeongbokgung Palace once again. In the early 20th century, the colonizing Japanese tore the palace to shreds for a second time. It stood in disrepair until the 1990s when the current ongoing restoration project launched. The restoration sought to return Gyeongbokgung to its former glory. 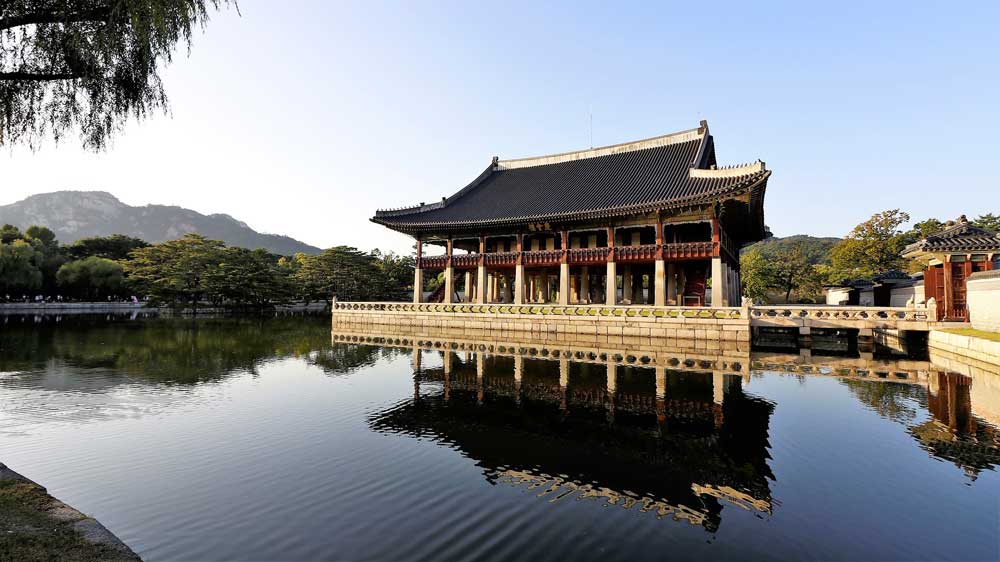 Today, what you’ll find at Gyeongbokgung Palace is nothing short of spectacular—even if lacking in true authenticity. The grounds are the most impressive among all the palaces in Seoul. Bugaksan and Namsan loom in the background. They keep watch over Gyeongbokgung’s stunning gates, halls, pavilions, gardens and bridges.

Besides traditional Korean architecture & landscaping, Gyeongbokgung Palace is home to two museums. Both the National Palace Museum of Korea and the National Folk Museum call the palace home. They’re among the top museums in Seoul and must-visits for any traveller with a passing interest in Korean history & culture.

Want a slightly kitschy take on ancient Korean history? Be sure catch the Joseon-inspired changing-of-the-guard ceremony. It sets off every hour starting at 10am and ending at 3pm.

Want to stay close to Gyeongbokgung? The Sunbee Hotel Insadong Seoul in nearby Insadong is one of the best places to stay in Seoul! For even more ideas, check out this complete guide to the best Seoul hotels.

Changdeokgung was constructed as a secondary royal residence by King Taejong. The palace came in handy when the Japanese invasion laid Gyeongbokgung to waste almost exactly 200 years after its founding.

Gyeongbokgung’s first reconstruction took flight between 1592 until 1868. During that time, Changdeokgung Palace functioned as the primary royal seat for the Joseon Dynasty. In fact, it housed the kings & queens longer than the main palace of Gyeongbokgung! 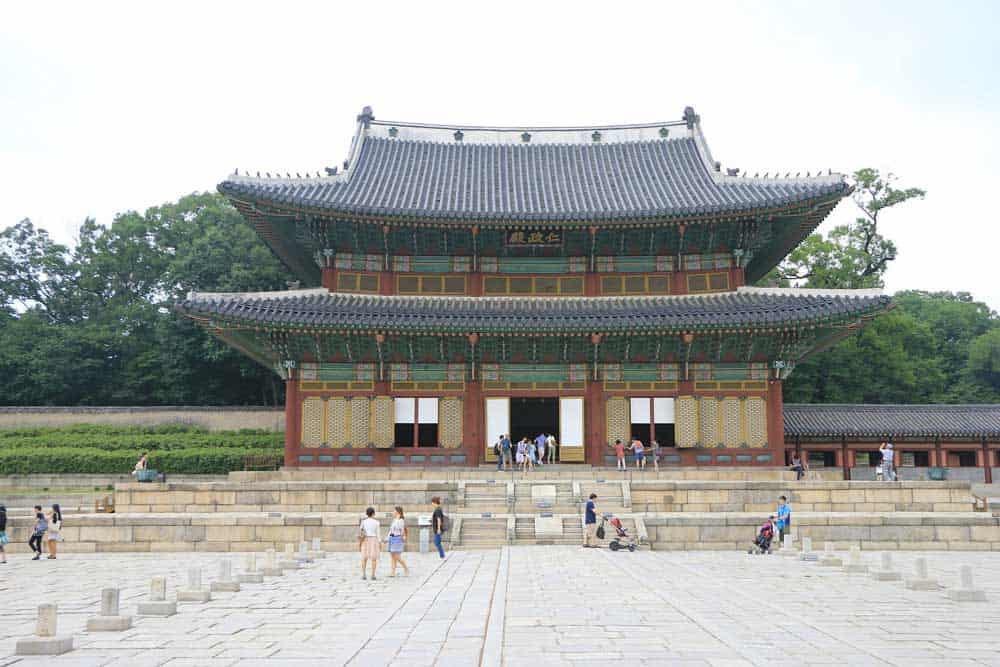 Although slightly younger than Gyeongbokgung, Changdeokgung Palace boasts extra accolades. Among Seoul palaces, Changdeokgung is the only UNESCO World Heritage Site. And it couldn’t be more deserving.

Like Gyeongbokgung, Changdeokgung Palace didn’t have an easy history. It, too, was damaged and repaired many times over its long lifespan. What makes Changdeokgung unique, though, is that it’s retained its authentic elements better than any other palace in Seoul. The buildings are still reconstructions of the originals. But they’re much older than the late-20th-century equivalents at Gyeongbokgung.

There’s another big reason for its popularity among Joseon rulers. The grounds of Changdeokgung Palace blend seamlessly with its natural surroundings. Nowhere is this more obvious than in Huwon, Changdeokgung’s “secret garden.” 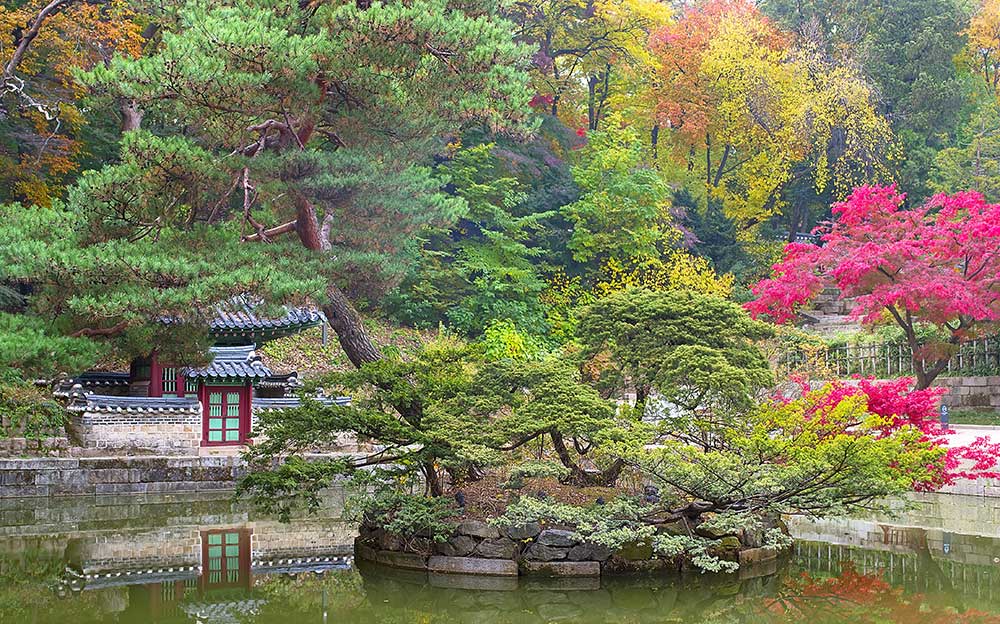 Walk among the ponds and foliage of Huwon. It’s a tranquil escape that’ll make you forget you’re smack dab in one of the world’s biggest cities.

You’re only able to visit Huwon on a separate special guided tour (₩8,000). Admission is included if you choose to buy the Seoul palaces combination ticket (₩10,000). It’ll give you access to Gyeongbokgung, Changdeokgung, Changgyeonggung and Deoksugung.

The closest metro station to Changdeokgung Palace is Anguk Station (Line 3). It’s about a 5 minute walk east along Yulgok-ro from Exit 2.

Changgyeonggung Palace shares the grounds next to Changdeokgung. It’s a quick detour away from Seoul’s second most important palace.

Even though it’s not as popular as its neighbour to the west, Changgyeonggung has a lot going for it. It’s the only palace in Seoul featuring buildings built before the 20th century.

Changgyeonggung’s storied past paints an interesting picture for travellers enthralled by Korean history. An original 12th-century Koryo Dynasty palace once stood in Changgyeonggung’s place. It wasn’t until the late-15th century that it got a facelift. In 1483, King Sejong renovated the palace as a gift to his father, King Taejong, who was stepping down from the throne. 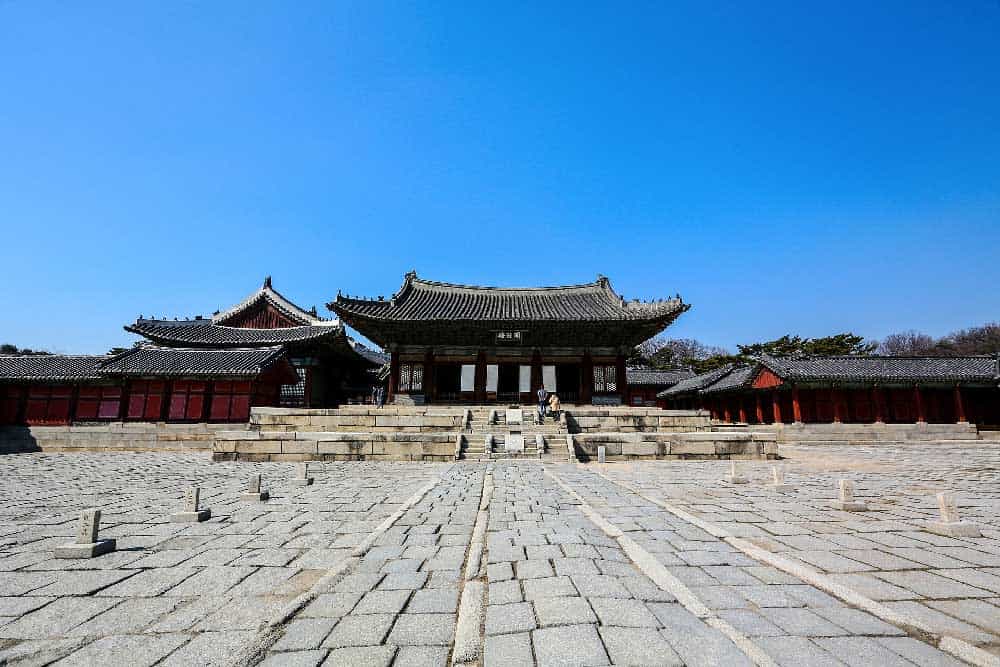 Over the years, Changgyeonggung Palace was used mostly as royal residence. Relatives, queens and mistresses of the Joseon kings all called the palace home. In the early 20th century, Japanese colonizers forwent destroying the palace. Instead, they converted it into a zoo and botanical garden.

It wasn’t until 1983, long after Korea shook the yoke of Japanese occupation, that Changgyeonggung once again became a palace. A series of restorations began to return it to its former glory.

Of this first trio of Seoul palaces in central Jongno-gu, Changgyeonggung Palace is the least impressive. Checking out the palace’s magnificent gardens, however, make visiting worthwhile.

If you can, time your visit to Changgyeonggung with spring or fall. These two seasons are the best times to visit Seoul. Visit in spring to see the landscape draped in cherry blossoms or in autumn to admire the blazing fall colours.

If you’re already at Changdeokgung, it’s a short walk east through a small gate to the palace. Alternatively, hop onto the Seoul metro. Take Line 4 to Hyehwa Station. Changgyeonggung is about a 5-minute walk west. From Exit 4, followDaemyeong-gil and Changgyeonggung-ro.

Want a smaller and quieter Seoul palace experience? Set your sights on Deoksugung Palace. The palace is located in the northwestern corner of Jung-gu.

Compared to other Seoul grand palaces, Deoksugung was less important among Korean rulers. During Japanese occupation, the palace escaped much of the fiery fate of others. (Gyeongbokgung and Gyeonghuigang weren’t so lucky.)

Along with the reconstructions at Deoksugung, a handful of pre-20th-century buildings remain. They’ll give you a rare authentic glimpse of Seoul’s past. 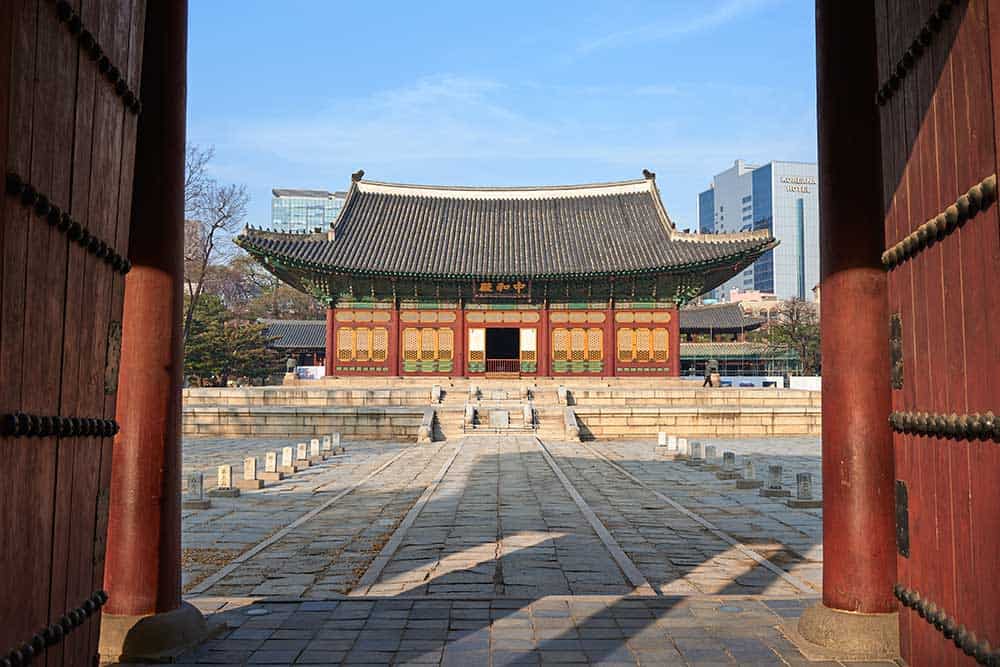 The history of Deoksugung is unlike other Seoul palaces; in fact, it wasn’t intended to be a palace at all! The former royal houses were only “upgraded” to palace status after a late-16th century Japanese invasion left the others in ruin.

Although it remains lesser-known than Gyeongbokgung and Changdeokgung, Deoksugung is still important. It was the final home of Gojong, the last Joseon king and first emperor of Korea. His death took place at the palace, giving it a great significance in Korean history.

Oddly enough, Deoksugung Palace’s major claim to fame is its early 20th-century buildings. They feature European-style architecture that seem out of place among its Korean motifs. Deoksugung is the only palace in Seoul that dips outside traditional Asian design boundaries.

The palace is next to City Hall Station (Lines 1 & 2). Exit 3 will spit you out onto the Deoksugung grounds.

With its smaller stature and “younger” face, Gyeonghuigung Palace is the least popular of the five grand palaces of Seoul. Like Deoksugung, Gyeonghuigung’s history began as a secondary royal residence. After the Japanese devastated the main Joseon palaces in 1623, its fortunes rose.

For about two centuries, Joseon royalty used the palace. In the 19th-century, a fire ripped through spoiling its heyday. Before a restoration could take place, the Japanese rolled in again. During their early-20th-century occupation of Korea, they devastated the palace. It gave Gyeonghuigung little chance to recover. 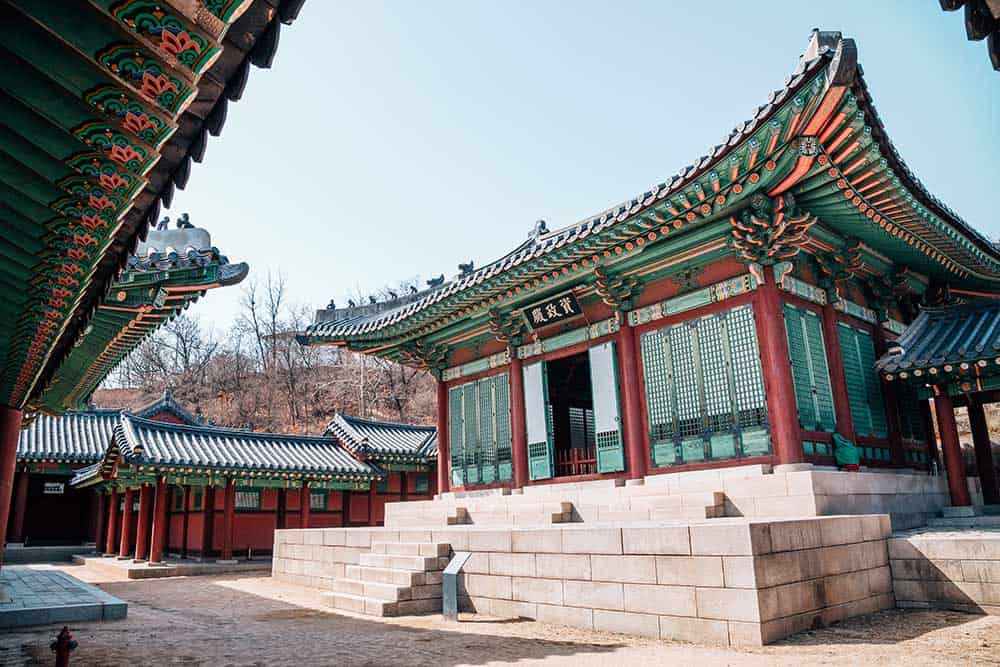 At the height of its glory, Gyeonghuigung Palace was a large complex. Over 100 buildings spread around it. Its fate, however, was all but sealed by the Japanese. New circumstances in Seoul at the time meant that only part of the palace could be restored.

The current 20th-century reconstruction reflects only a third of the original. And although it’s impressive to look at, Gyeonghuigung remains the least authentic of all the grand palaces of Seoul. It’s close to Deoksugung, however. So, there’s no reason to not throw Gyeonghuigung into your Seoul travel plans.

History lovers will also enjoy the Seoul Museum of History. It sits upon the palace grounds. Both the palace and museum are free to visit.

Although it doesn’t have the label of “grand” palace, Unhyeongung Palace occupies an important place in the history of Seoul—and of Korea. This small palace was the former home of Heungseon Daewongun. His son, Gojong, was the last Joseon king and the first Korean emperor. He was born at Unhyeongung and lived here until ascending to the throne at the tender age of 12. 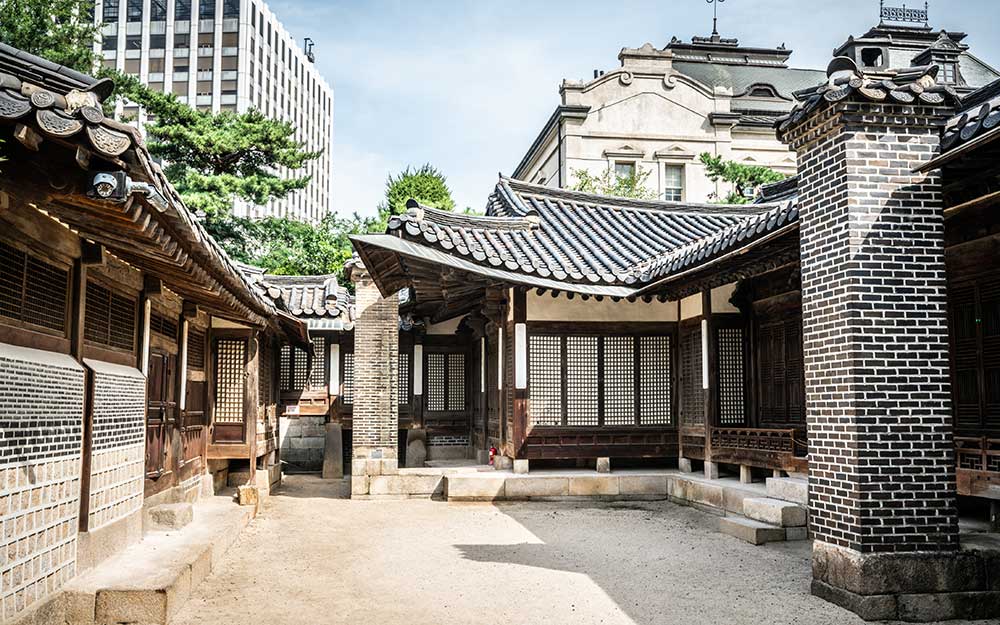 Like every other palace Seoul, Unhyeongung is but a shadow of its former self. Most of the buildings were damaged or destroyed over the years. The 20th-century Japanese occupation and Korean War were most devastating to the palace. What remains are reconstructions of the real deal.

Today, Unhyeongung Palace is a hotspot for cultural activities. Most famous is the yearly re-enactment of the marriage of Emperor Gojong and his bride Empress Myeongseong. With its beauty and history, Unhyeongung is also a popular place for young Koreans to tie the knot.

The closest metro stop to the palace is Anguk Station (Line 3). Exit 4 spits you out directly onto the grounds of Unhyeongung.