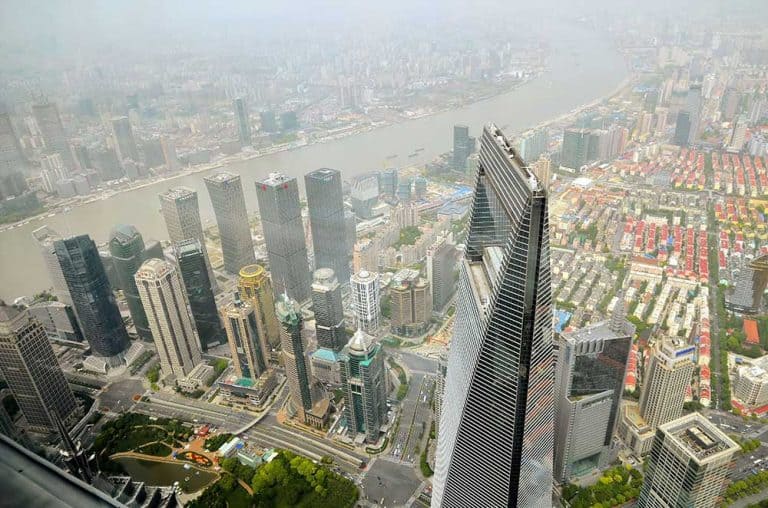 From the day it opened in 2008, following 11 years under construction, the glittering Shanghai World Financial Centre (SWFC) has attracted the admiration of visitors from across the world.

At the time, it was the second-highest building on earth, hailed as a marvel of engineering ingenuity. Although since surpassed, checking out this building is one of the best things to do in Shanghai.

The SWFC is wedge-shaped, tapering up to a point at the pinnacle. There’s a large trapezoidal opening at the top designed to reduce wind forces. The building looks a little like an enormous, if elegant, bottle opener, which is exactly what the locals call it.

The magnificent tower has a double panelled mirrored glass exterior of sparkling blue, a shining icon of modern construction techniques.

What to expect at the Shanghai World Financial Center

At 492 metres, the Shanghai World Financial Center has 101 floors. It’s serviced by 91 high-speed, double-decker elevators. The elevators move at the speed of ten metres a second which means that you’ll reach the 95th floor in just one minute.

There are three observation decks, one each on floors 94, 97 and 100. The highest is 474 metres above the ground. It’s the third-highest observation deck in China and the fifth-highest in the world. The floor of the 55,000m² observation deck is partially built from glass. You feel as though you’re floating above the city when you stand on it. 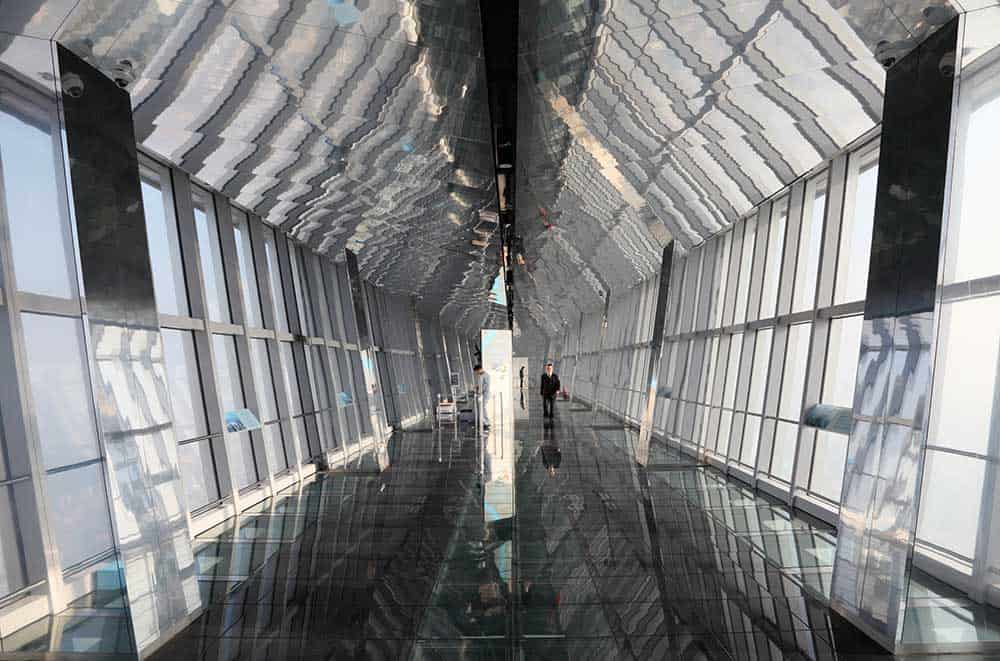 From this vantage point, spectators have a spectacular view of the bustling city below. Expect magnificent views of the Huangpu River, and across the river, views of the quirky Bund. Its unusual architecture and river views stand in stark contrast to the modernity of the glittering skyscrapers and neon lights of central Shanghai.

Perhaps disappointingly there is no 360° view from the SWFC. Views only head towards the east and west.

On a bright day, you can see up to 40 kilometres across Shanghai. If you want to make the most of your visit to the SWFC, you should plan your trip for a cloudless pollution-free day (which you’ll soon figure out can be difficult, if not impossible, at certain times of the year).

The day and night time views from the tower are very different and it is worth taking a second trip to catch the views at different times of the day.

The entrance fee to the lower bridges on floors 94 and 97 are a little less expensive than floor 101 and they do have slightly different features. The bridge on the 97th floor offers observers the feeling of floating above the city.

The roof of the Skywalk is open, so visitors enjoy a breath of fresh air as they gaze upon the views below. The 94th floor is frequently used for events and exhibitions against the spectacular backdrop of central Shanghai.

The SWFC also houses the 5-star Shanghai Park Hyatt Hotel on the 79th to 93rd floors. If you’re looking for shops or restaurants, you’ll find them on the ground floor.

Things to know about the Shanghai World Financial Center

Set aside one to two hours for your visit to the Shanghai World Finance Center. The SWFC is located in the Lujiazui finance & trade zone in Pudong District. It is open between 8am and 11pm, but the ticket office closes at 10pm.

If you plan to visit all the observation decks, it is significantly cheaper to buy a combined ticket. You’ll wait for around an hour to get onto the 100th floor. If waiting is not your thing, we suggest that you go up to the 91st floor to the 100 Century Avenue Restaurant and sip a cocktail as you peer out over the Shanghai metropolis.