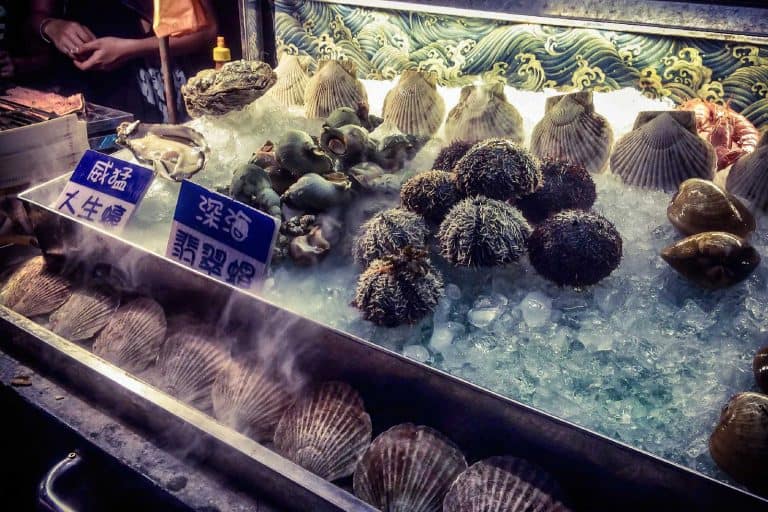 Even if you’ve never visited East Asia or Taiwan, you’ll know what Taipei is famous for: its night markets.

Strewn around the city, the best night markets in Taipei are must for any visit to Taiwan’s capital. Get in on the action and join locals & tourists as they gulp down authentic Taiwanese street food.

Though fast-paced & rowdy, there’s no better place to feel pulse of Taipei than at a night market. It also offers an unparalleled glimpse into Taiwanese culture. In fact, plodding through a night market is one of the main reasons to visit Taiwan!

Looking for more ideas for your trip? Check out our Taipei Travel Guide for more recommendations on when to visit, where to go & what to do!

There’s a reason (or two) that Shilin Night Market often tops top-ten lists of things to do in Taipei. As the largest night market in Taiwan, Shilin is a must-see. If you’re seeking out an authentic night market experience in Taipei, nothing beats it. 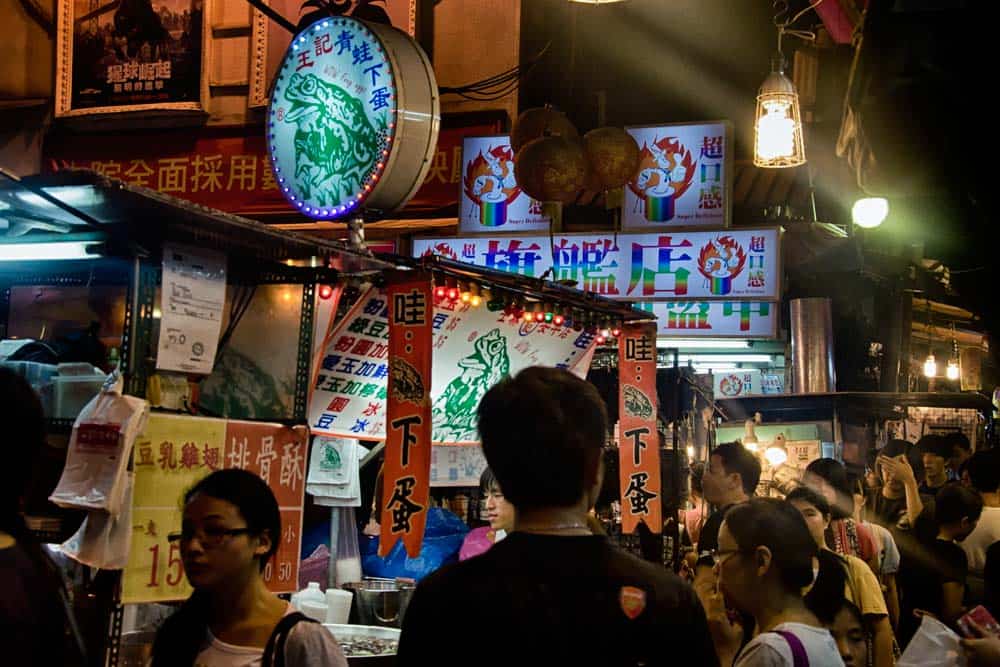 Tastebuds not tickled by all the delicious Taiwanese food? Shilin Night Market is chock-full of stores, cinemas, and arcades. Like in any great neighbourhood in Asia, you’ll also find plenty of karaoke bars to sing the night away.

The action at Shilin Night Market starts around 4pm and continues until about 1 or 2am. The last MRT train from nearby stations departs at about midnight.

Getting there: Jiantian MRT Station lies just south of the market. From here, it’s a quick five-minute walk to the food court, the gateway to Shilin’s excitement.

While Shilin reigns as the tour-de-force of Taipei night markets, Huaxi Street Night Market may be the quirkiest. Like Shilin, Huaxi offers a wide selection of Taiwanese food. But not all its bounty might appeal to you. 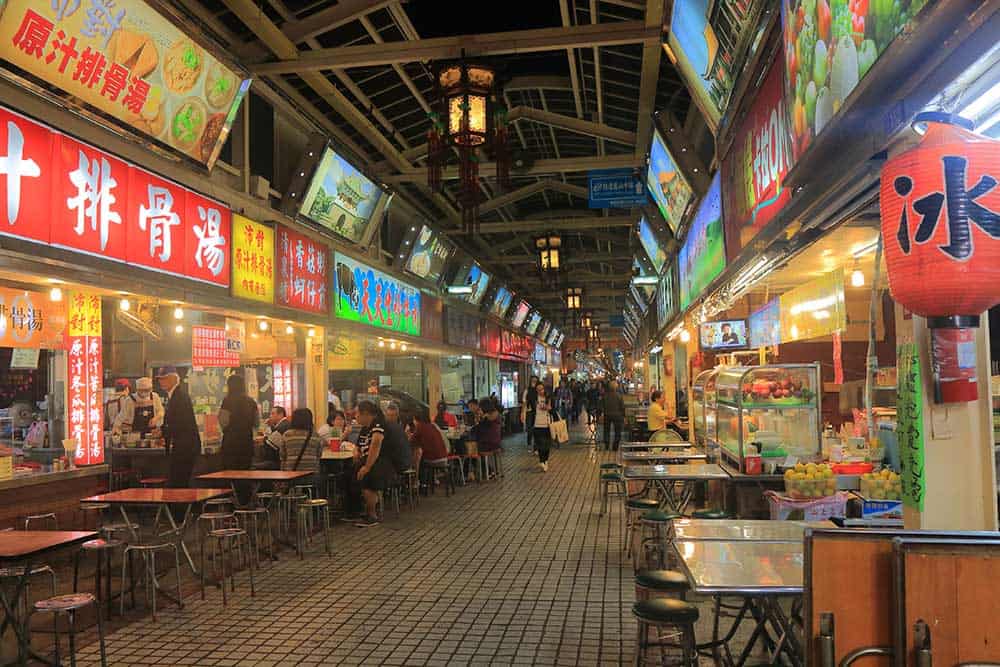 Fancy snake soup washed down with a hearty shot of snake’s blood?

Are you an adventurous & strong-stomached eater who’d make Anthony Bourdain proud? Huaxi Night Market is a nirvana of culinary oddities.

Snake meat not quite bizarre enough for you? Huaxi serves up other “delicacies.” Among the odder finds on the menus here are deer penis wine, and turtle testicles. There’s also a barrage of tonics and herbs to heal ailments and add a little “oomph” to your—ahem!—”step.”

See Also: When is the Best Time to Visit Taipei?

Besides the outlandish, you’ll find tamer foodstuffs at Huaxi Street. Other options include fresh seafood such as squid and shellfish. Be sure to also seek out Danzai Noodles, a signature dish from Tainan.

Should the sight of its eccentric dishes quash your appetite, the area also hosts several massage parlours, spas, and craft shops.

Although not necessarily unsafe, Huaxi Street isn’t Taipei’s most savoury locale. (Who would have thought that snake blood and massage parlours would attract the wrong crowd?)

Travellers shaken by places that are a little rough around the edges may want to give Huaxi a miss for other Taipei night markets.

Getting there: Like Shilin, Huaxi Night Market is easily accessible with the Taipei MRT. It’s only five minutes by foot from Longshan Temple Station.

See Also: Where to Stay in Taipei, Taiwan

On your way from the metro stop, be sure to check out the station’s namesake, Longshan Temple. It’s one of Taipei’s most interesting temples and a must-see for visitors.

Less (in)famous than Shilin or Huaxi Street, Raohe Night Market is a cheaper option for your Taipei food adventure. It’s the perfect place to restore balance to your Taiwan travel budget. Come with an empty stomach! 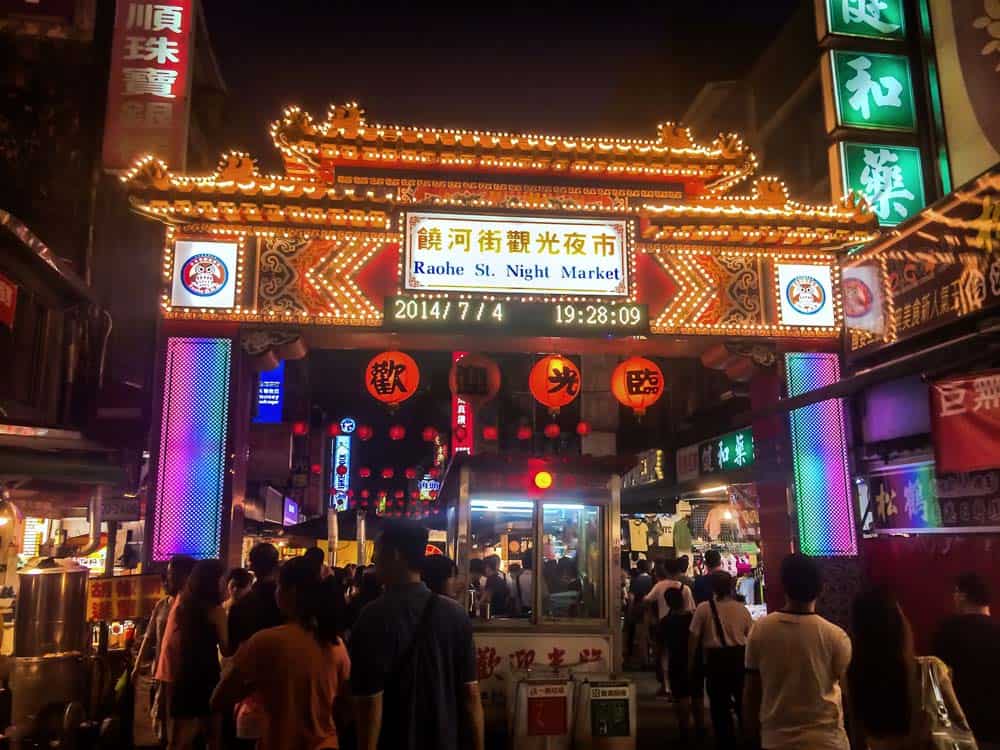 The true hero of the night market though is the pepper meat bun. Check out the small stall near the main entrance; the long line-up will point you in the right direction.

Besides enjoying the rich array of Taiwanese food, keep your eyes open for the grand Taoist Ciyou Temple. The temple flanks the night market’s main entrance.

Dating back to the mid-18th century, Ciyou Temple is one of Taipei’s most beautiful temples. To see it at its most spectacular, visit at night. Its façade is richly decorated with various figures. Look out for the twin dragons alongside the three effigies. They effigies represent the Taoist concept of Fú Lù Shòu (Good Fortune, Prosperity, Longevity).

Getting there: Raohe Street is a hop away from MRT Songshan Station. After exiting the MRT, swing north on Songshan Road and walk until you see Ciyou Temple. The Raohe Night Market will be on your left.

Also known as Linjiang Street Night Market, Tonghua Night Market is a favourite among Taipei’s foodies and shoppers. It’s located in the leafy Da’an District. The market’s not far from Taipei 101 either, making it an easy detour on your itinerary.

You’ll enjoy all the usual Taiwanese food favourites at Tonghua. And at reasonable prices! Plod the stalls for thick shrimp soup, pork sausages, pan-fried dumplings, oyster noodles, and oyster omelettes. Or follow your nose to its stinky tofu stands. You’ll find both the more common deep-fried and stewed varieties here. 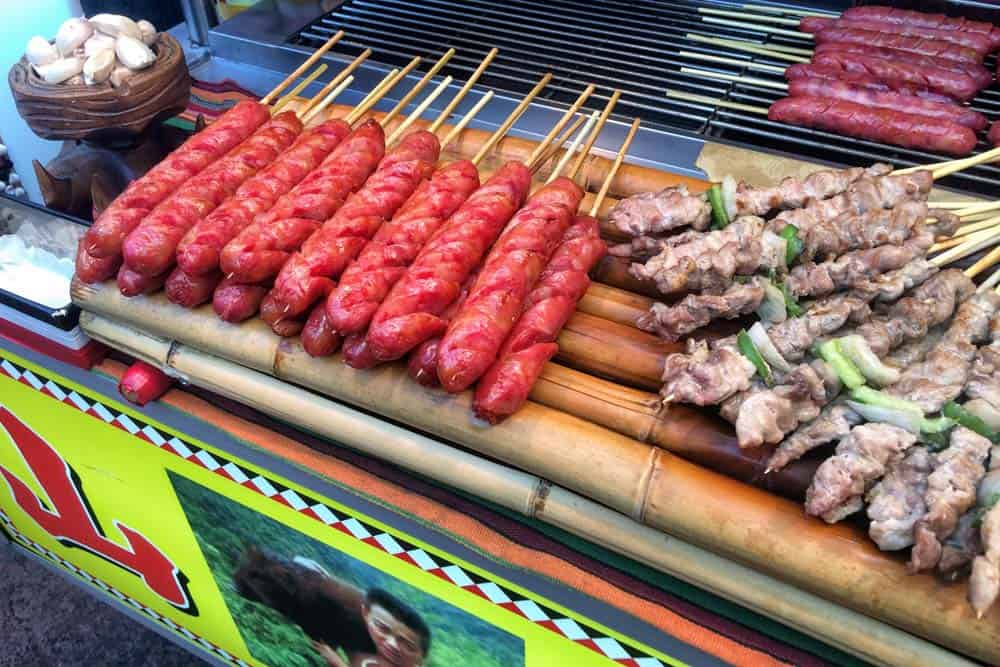 Alongside the street-side vendors, Tonghua Night Market hosts several popular teppanyaki restaurants. Along Linjiang Street, a filling teppanyaki meal is a must-have. The meal fries up meats, vegetables, eggs, and sauces on a table-side metal cooking surface. Starting as cheap as US$3, both your wallet and your stomach will thank you for trekking out here!

Getting there: From MRT Xinyi Anhe Station, walk east on Xinyi Road towards Taipei 101. Hang a right on Tonghua Street and walk south about five blocks to Linjiang Street to find the night market.

Crowds may not swarm to the Ningxia Night Market as they do Shilin or Huaxi. But there’s something appealing about the atmosphere that sets it apart from Taipei’s big hitters.

Ningxia Night Market is located in Datong, one of Taipei’s oldest districts. The market’s vibe is traditional, offering a glimpse of the Taipei of yesteryear. 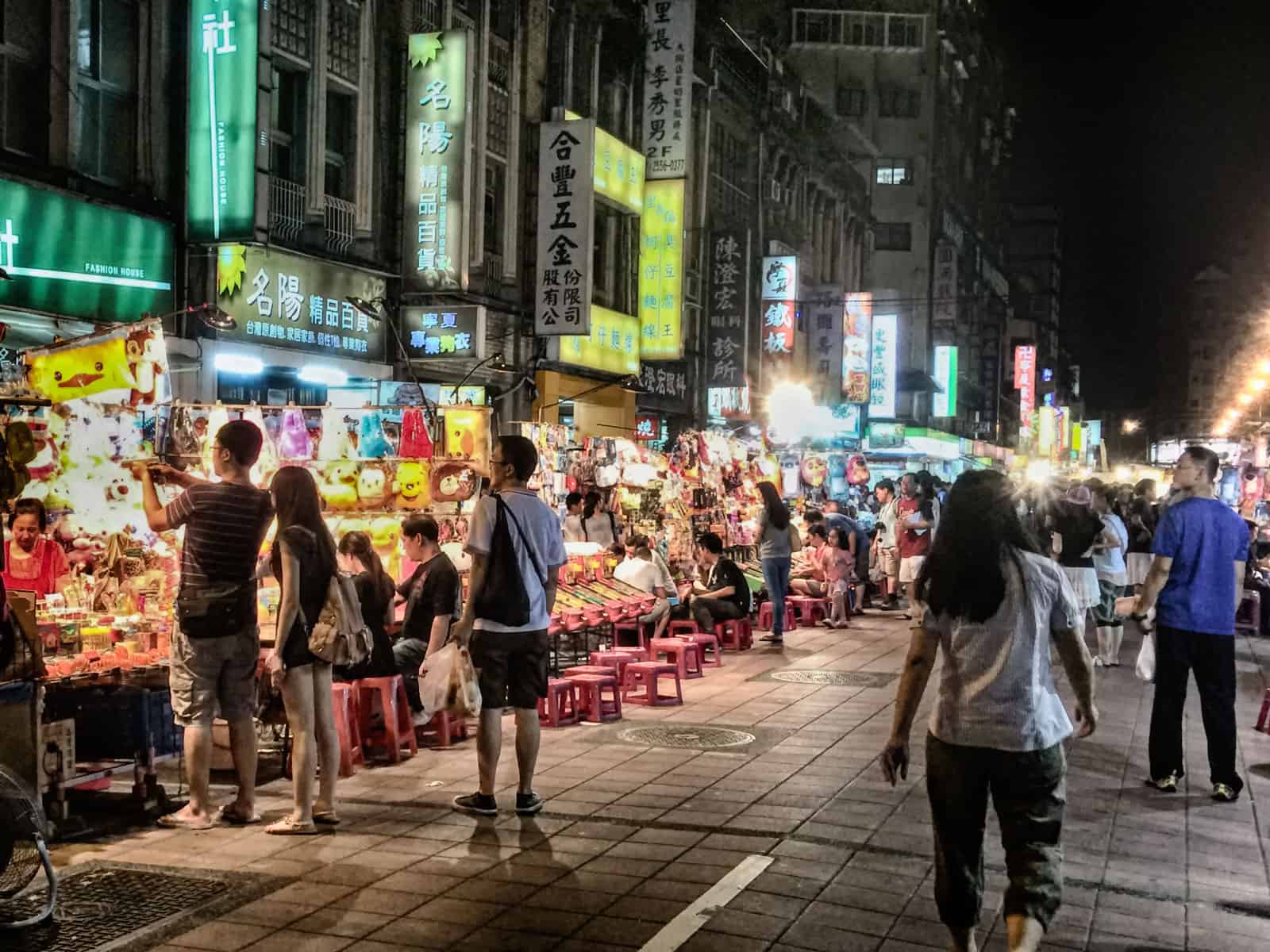 Ningxia Night Market is also famous for its yummy desserts. Go for the sweet peanut soup and fried taro cake, two of the specialities here. Sweet-tooths should explore the northern end of the market. It’s the easiest place in Ningxia to tackle your late-night sugar cravings.

Like any other Taipei night market, head for the longest queues to find most popular stalls in Ningxia Night Market. Waiting in long line-ups won’t appeal to everyone. Trust the process. Follow the locals to their favourite spots in Ningxia. It’s a sure-fire way to find some of the most scrumptious after-dinner snacks in Taipei!

Getting there: From MRT Zhongshan Station, one stop north of Taipei Main Station, walk west on Nanjing W Road. When you reach the traffic circle, swing north. The southern entrance to the Ningxia Night market is above the traffic circle. All in all, it’s less than a ten-minute walk from MRT Zhongshan Station to Ningxia. There are also plenty of air-conditioned bubble tea and ice cream stands along the way if the Taiwanese humidity proves too taxing.

Unlike other night markets in Taipei, Shida Night Market caters shoppers more than foodies. The market has undergone several changes in recent years. Shifting regulations left a vacuum, filled by a new generation of enterprising Taipeiers. 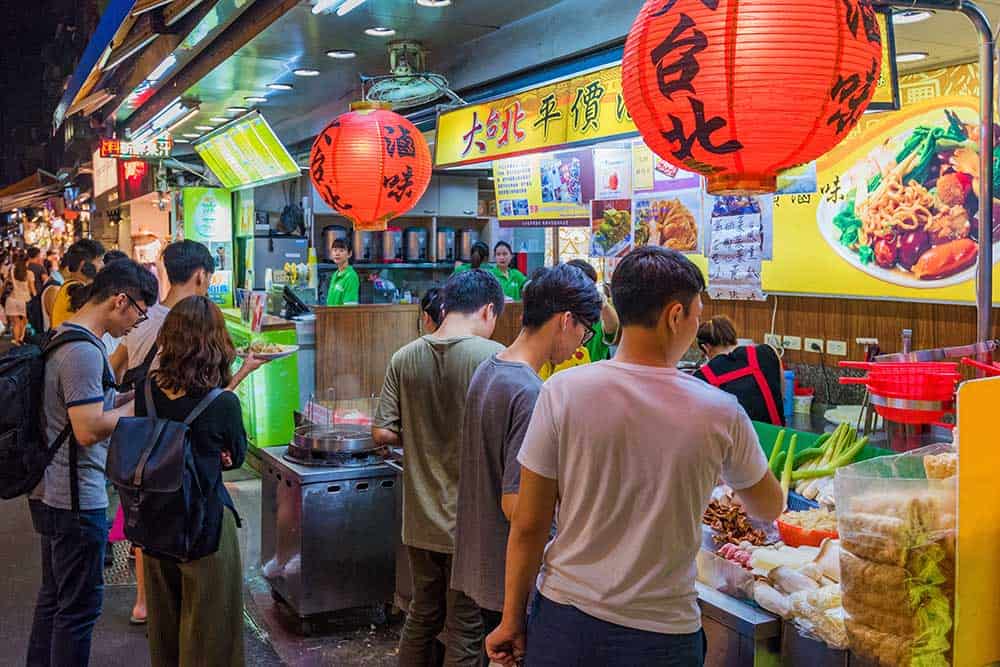 Browse the shops & stalls of Shida Night Market to hunt for bargains on the city’s hippest fashions. The area is a popular hang-out for younger crowds thanks to the nearby National Taiwan Normal University.

Of course, shopping’s only half of it. There’s still plenty of great food hanging about.

One of the specialities around Shida is pan-fried dumplings (sheng jian bao). Compared to their steamed counterparts (xiao long bao), they’re a thicker, heavier, and more filling evening snack.

Getting there: Hop onto the MRT to Taipower Building Station on the Songshan-Xindian Line. From Exit 3, walk north along Shida Road. The market is about a 10-minute walk ahead.

Never heard of Gongguan Night Market? You’re not alone. Lesser-known among tourists, this night market is located at the southern tip of Zhongzheng District. It’s just far enough off-the-beaten-path to get off the radar of most guidebooks. And that’s exactly when you should visit! 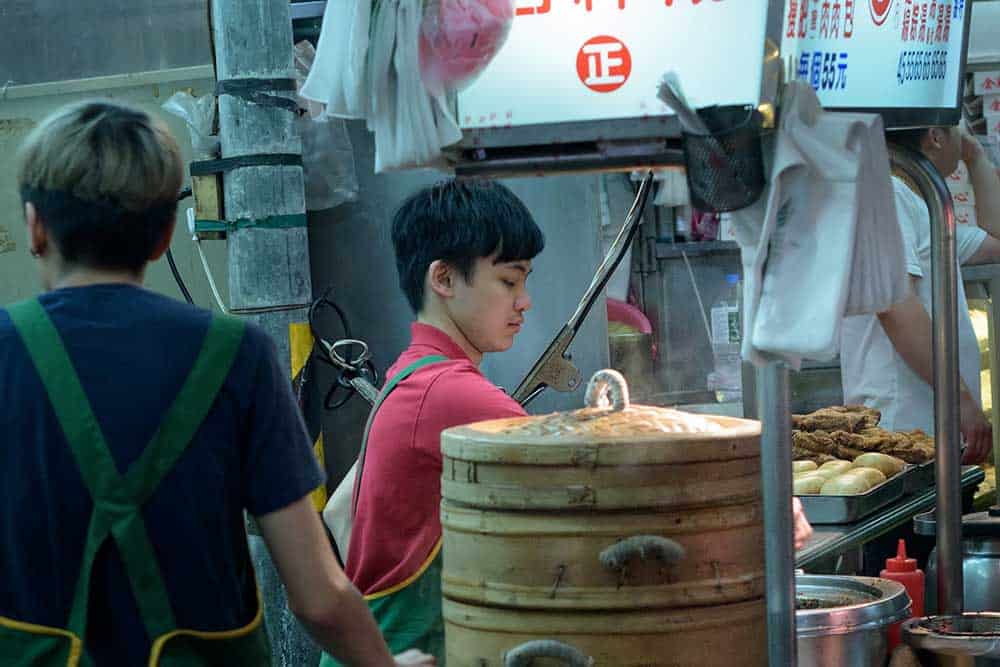 For locals, Gongguan is a favourite. It’s not only one of the city’s biggest night markets, but one of the trendiest. Like Shida to the northwest, Gongguan Night Market attracts a younger crowd. National Taiwan University is within a stone’s throw of the food haven.

As many of the patrons are Taipei’s trend-setters, the food is less traditional than elsewhere. Among the vendors, you’ll find plenty international flavours interspersed with Taiwanese. Southeast Asian is particularly popular in Gongguan. The market’s also a fantastic place to taste Cantonese-style roasted duck and scallion pancakes.

Getting there: Take the MRT to Gongguan Station. The market is just south of Exit 1.

Not into the hijinks at nearby Huaxi Street? Slip over to Guangzhou Street Night Market instead.

If you’re in the Longshan Temple area and need a food fix, don’t miss out on this one. Guangzhou Street Night Market is the more traditional of the area’s two main markets. And it’s the one that’s preferred by native Taipeiers. (So, maybe snake’s blood isn’t traditional Taiwanese food, after all!) 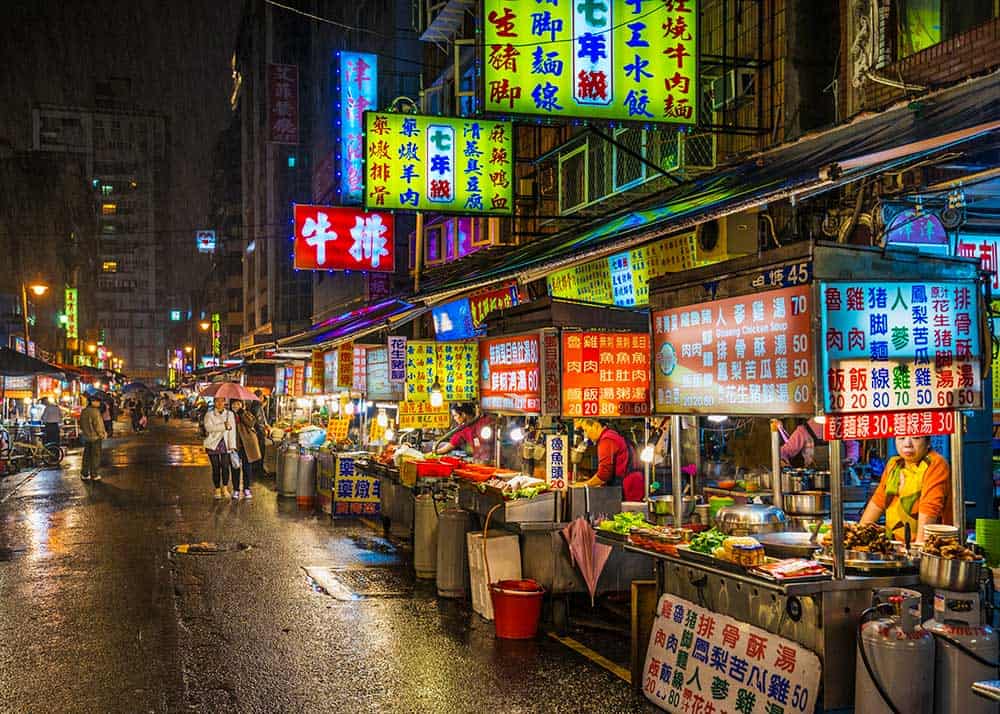 The dishes along Guangzhou Street are cheaper and more flavourful than at its touristy neighbour. And if you could do without the bizarre gimmicks, you’ll like the atmosphere here much better.

Among the most famous foods to try here is glutinous rice in pork intestines. To be sure, the dish is not a mark of culinary aesthetic brilliance. But it doesn’t taste half bad! (Hopefully your memory is short so you can forget what you’re eating.)