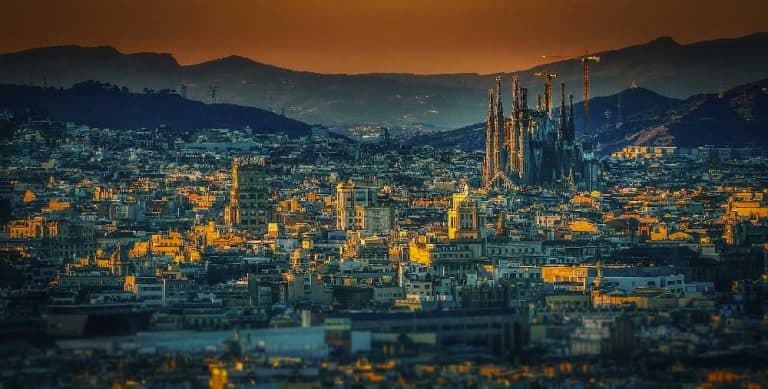 There’s no shortage of things to do in Barcelona. Open any travel guide and you’ll find a dozen suggestions for one of the most popular tourist destinations in Spain.

As one of the biggest metropolises in the region, Barcelona has something for everyone. Wandering among the top tourist attractions in Barcelona, you can spend your time visiting historic sites or finding modern day excitement at an amusement park. There are numerous high end shopping malls and eclectic flea markets – or you could check out a thrilling FC Barcelona football match.

Not sure where to start your Barcelona sightseeing adventure? Follow along with guide to the best Barcelona attractions including the best places to visit in Barcelona…

Got more travel plans on the horizon? Check out all of our other attractions guides and our Spain Travel Guide for more ideas on where to go, when to visit & what to do!

What to see & do in Barcelona

It’s easy to spend your time looking up at the unique architecture found throughout Barcelona, but you’ll miss out on some of the other top choices for what to see in Barcelona. If you truly want to experience the best of Barcelona, make sure you check out these top things to see in Barcelona…

If you’re not sure what to do in Barcelona, start with a walk along La Rambla. La Rambla is the main thoroughfare that takes tourists from the port area, through the centre of the city, and to some of the most important landmarks in Barcelona. 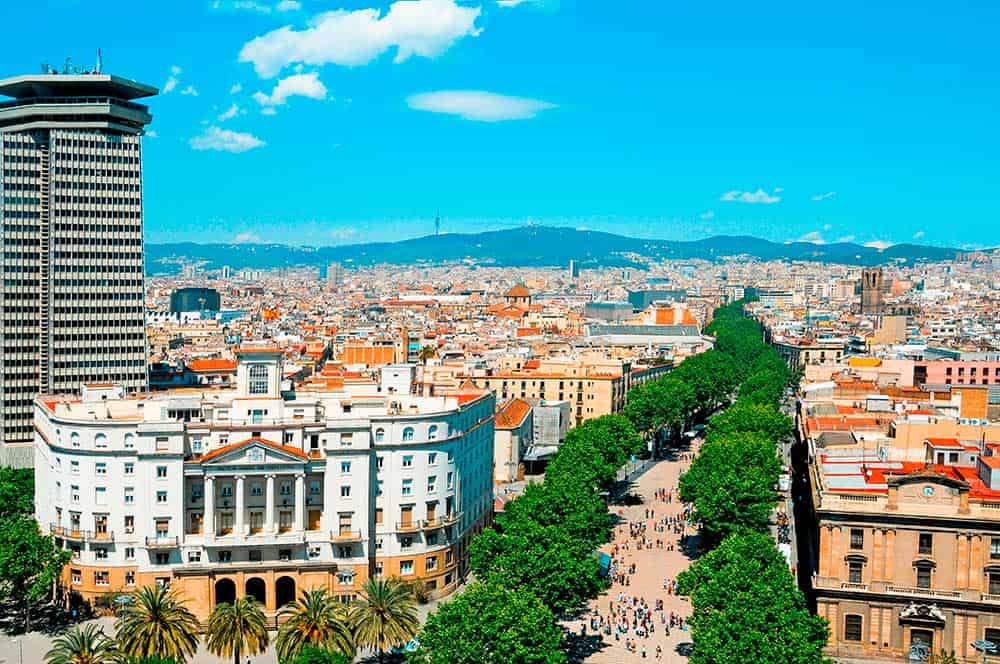 This pedestrian roadway has become a major attraction. As it’s always full of tourists, La Rambla attracts a wide range of locals looking to feed, and entertain visitors.

You’ll find street performers, artists, merchants, and food vendors along the entire stretch of La Rambla. Walking this thoroughfare is a great way to experience Barcelona.

La Sagrada Familia is a neighbourhood just north of the centre of the city. It’s named after one of the most famous works by important local architects, Antoni Gaudi. 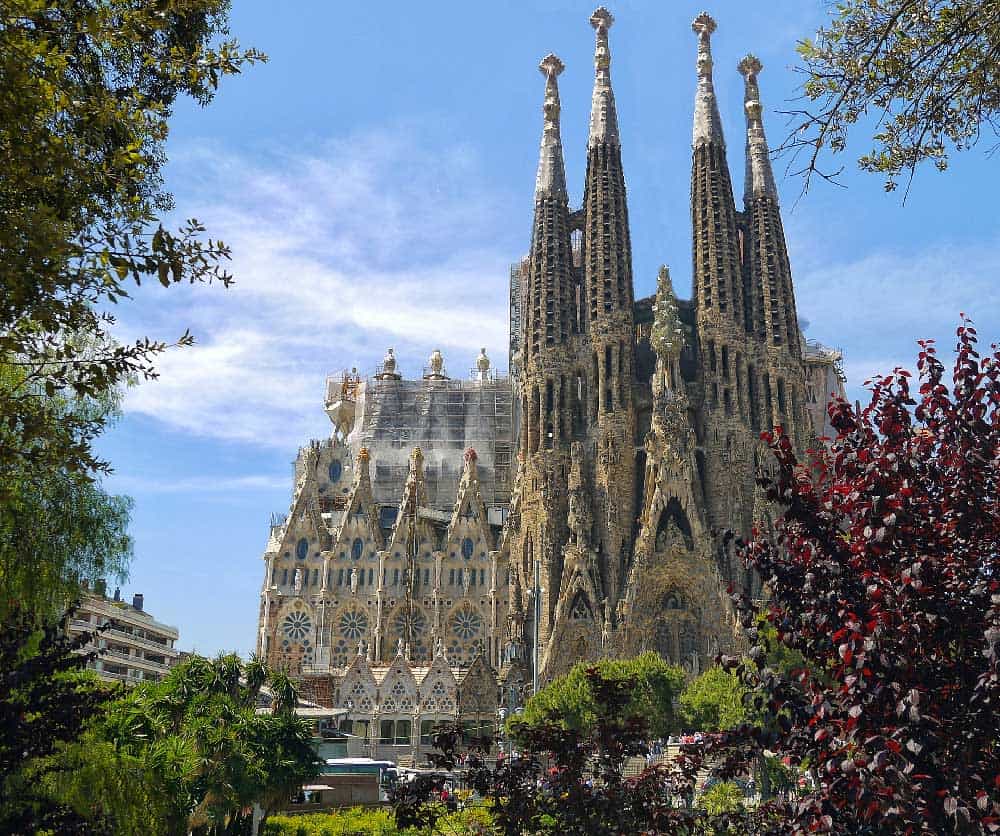 When it comes to Barcelona sightseeing, you’ll need to view at least one building designed by Gaudi and La Sagrada Familia (The Church of the Sacred Family) is considered his masterpiece.

The Gothic-style church was his focus until he died in 1926. Nearly 100 years later, the building is still not quite complete. In fact, it’s expected to be completed exactly 100 years after Gaudi’s death.

The building is open to the public and features a combination of unconventional design elements and traditional details. Like most buildings designed by Gaudi, the Church of the Sacred Family is a one-of-a-kind structure.

Barcelona Cathedral is one of the most popular Barcelona attractions and a must-see whether you have 24 hours in Barcelona or manage to carve out a couple days. It’s located in the centre of the Gothic Quarter and the main cathedral in the city. 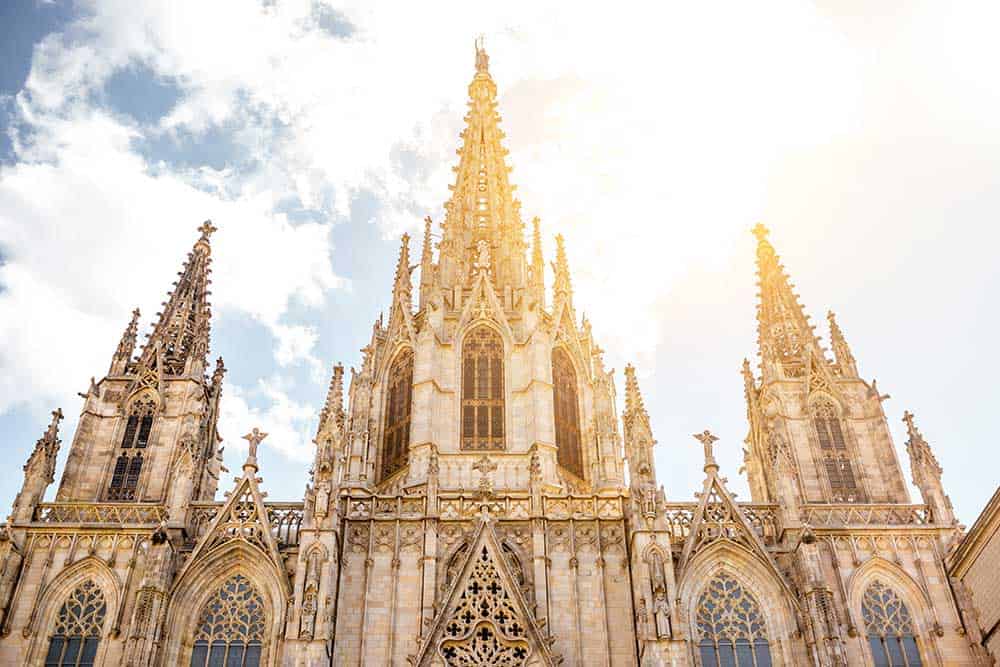 Construction on the cathedral started in the 13th century and wasn’t completed until about 200 years later. The impressive cathedral is a great example of the gothic architecture that you’ll find throughout Barcelona. It’s also got a tall tower that extends above the Gothic Quarter.

If you visit the cathedral, you can take a trip to the top of the tower and get an amazing view of the city. While the tower doesn’t provide a full 360-degree experience, you can still see some of the most prominent sights in the city.

Keep in mind that taking a tour of the tower costs extra. On top of the entry fee for the cathedral, you’ll need to pay several Euros to venture to the top.

The Picasso Museum is one of the best-curated collections of Pablo Picasso’s artwork. 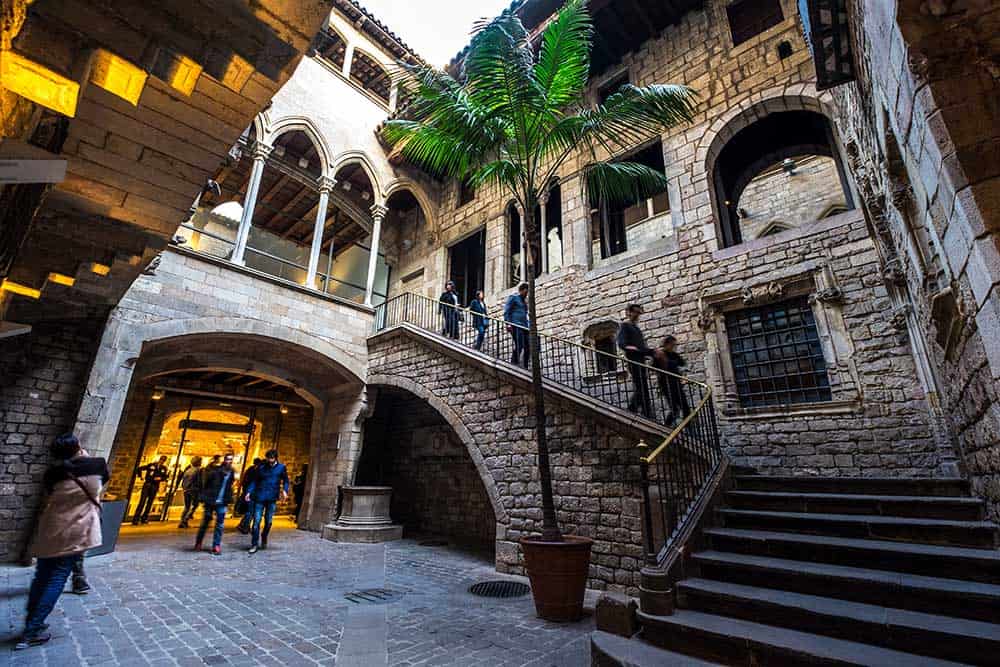 Most people are familiar with the abstract paintings by Picasso. You may not realize that he did plenty of other work.

His early years included more less abstract, more traditional paintings (including works from what are known as his Blue and Rose periods). He also created sculptures. You’ll also be sure to see many of his more famous “cubist” style paintings that became his signature.

Instead of simply showcasing the more recognizable styles of Picasso’s painting, the museum offers visitors a chance to see how Picasso’s style evolved over the years. The art is presented in chronological order, showing various stages of his career.

This is one of the most popular places to go in Barcelona and tends to get crowded during busy tourist seasons. You may want to get your tickets online if you’re worried about getting in.

If you run out of ideas for where to go in Barcelona, you can’t go wrong with a trip to the beach. La Barceloneta Beach offers up the largest stretch of sand in the city. 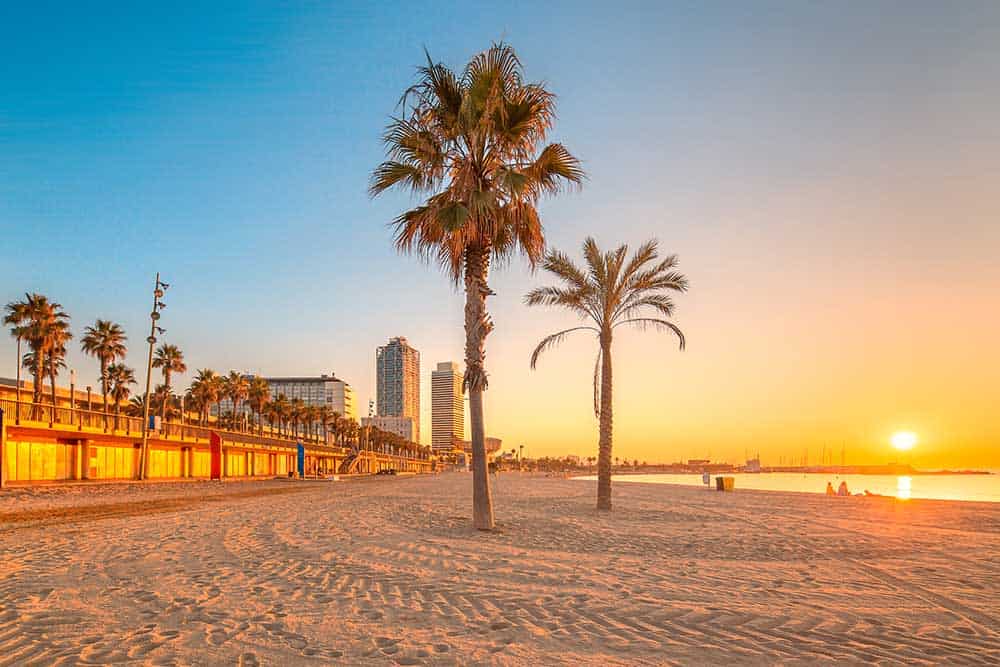 The beachfront promenade includes numerous bars and cafes. You’ll also come across vendors selling just about everything – from mojitos to massages. It’s an interesting, lively destination that attracts millions of tourists each year.

Keep in mind that the place fills up quickly. On a hot day, expect the entire sandy beach to be covered with locals and tourists alike.

If you want a prime spot, you’ll need to arrive early and stake your claim with an umbrella and lounge chair.

Boqueria Market is one of the best places to visit in Barcelona, thanks to the variety of treats and snacks that you can find here. 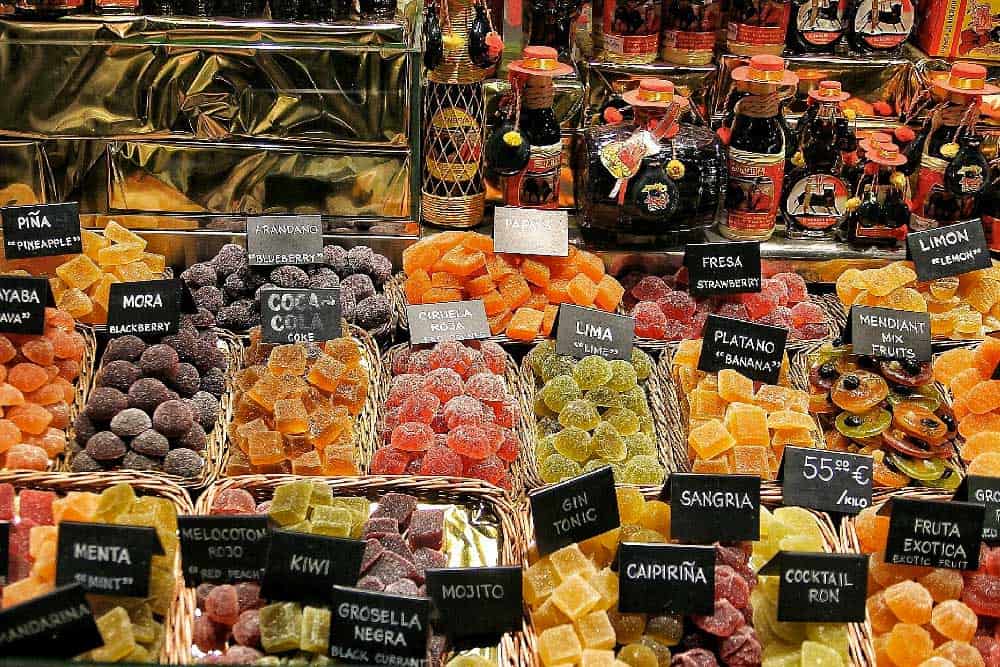 The history of this market goes back to the 13th century when food vendors would sell their goods to locals. The modern market was established in the 1800s, and is now a covered marketplace with a wide selection of options to please foodies.

You can source local specialties, including manchego cheese, or find wine, fruit juices, fresh fish, and all types of produce. It’s a major market for both tourists and locals.

Besides the food and produce stalls, the market includes numerous restaurants, cafes, and bars. It’s also right off La Rambla, making it an easy place to stop at if you’re out exploring the city.

Camp Nou Stadium is one of the most important Barcelona points of interest for football (soccer) fans. Catalans are devoted to their local football club – FC Barcelona. 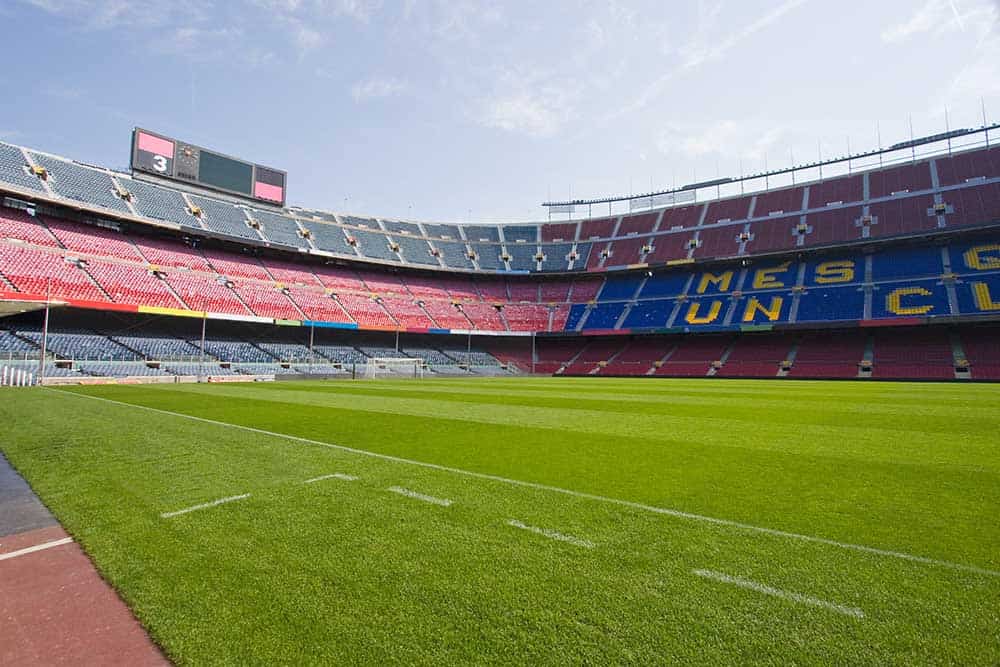 The stadium can hold up to 100,000 fans and often gets close to capacity during home matches. It’s also an important part of Barcelona’s history. During the Francisco Franco regime, citizens used football as a symbol of independence.

You don’t need to visit during a home game to explore the stadium. Tickets to tour the stadium are available throughout the year. You can get a behind-the-scenes look at the stadium and stop for souvenirs at the gift shops.

Like many popular tourist attractions, tickets sell out quickly. If you plan on visiting Camp Nou during peak tourist season, you should purchase your tickets online in advance.

Where to stay in Barcelona for sightseeing

For most travellers, the best choice for where to stay in Barcelona is the city centre, particularly the areas around Ciutat Vella, the Gothic Quarter, Las Ramblas, and Eixample. Here are a few ideas to start your Barcelona accommodations search…