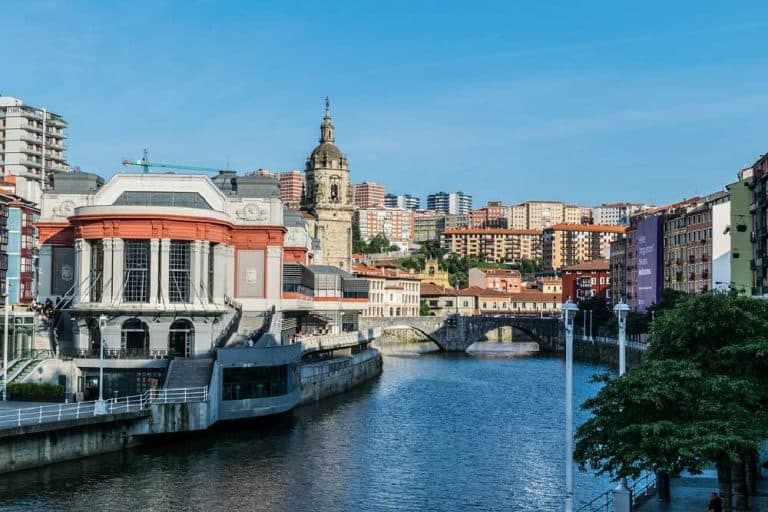 Surrounded by sprawling green mountains and featuring a skyscraper cityscape, Bilbao is a modern city with stunning scenery, making it one of the best places to visit in Spain.

Situated in the centre of Basque Country, this cosmopolitan city is sophisticated and full of action. There are a ton of things to do in Bilbao to keep you busy!

The riverside and port districts have experienced major regrowth, creating a traveller’s paradise full of resorts, bars, and shops. The old town area also provides a chance to get your cultural fix. Explore the centuries-old architecture and tour priceless artwork at world-famous museums.

Not sure where to begin? Start planning your trip with this guide to the top Bilbao attractions…

What to do in Bilbao: Top attractions & best places to visit

Take a stroll through the narrow streets of Old Town

Going on a walking tour of Old Town is at the top of the list of what to do in Bilbao. The oldest part of the city is where you’ll come across fascinating examples of historic Spanish architecture. 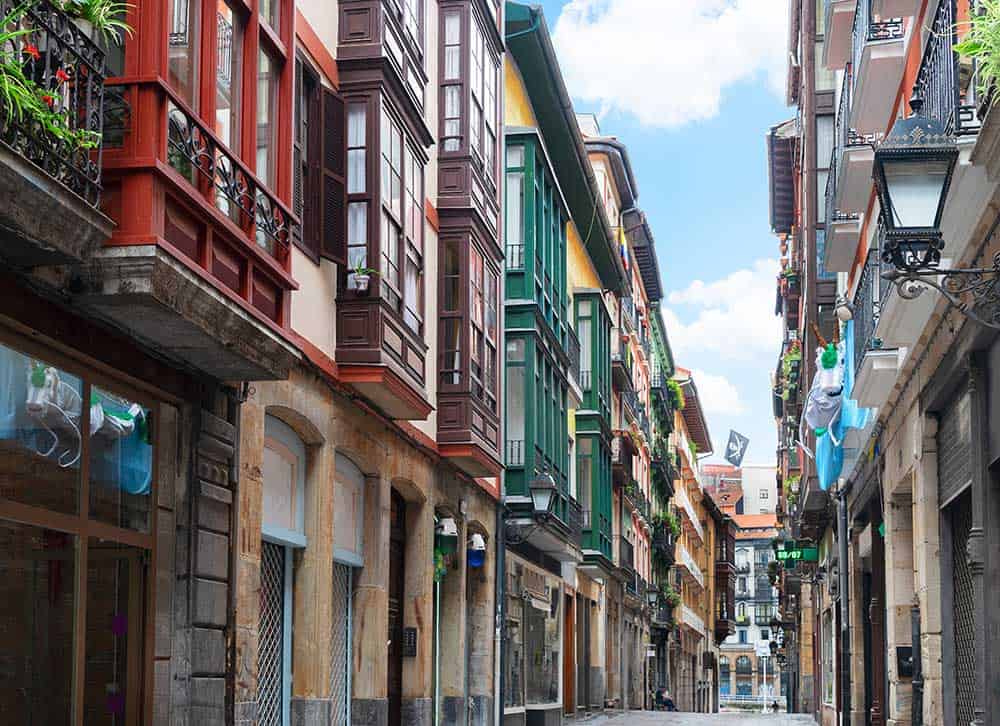 Some of the main attractions are in this area, including Bilbao Cathedral, Plaza Nueva, and several old churches.

Much of the Old Town district still looks the way it likely appeared a couple of hundred years ago. The narrow, winding streets are surrounded by large stone buildings. As it’s in the centre of the city, the Old Quarter is also accessible from the surrounding neighbourhoods, making it a natural spot to visit.

Like most old European cities, there’s plenty of interesting historic buildings in Bilbao. In the centre of the Casco Viejo district, you’ll find the towering Bilbao Cathedral, a highlight for any Spain travel itinerary. 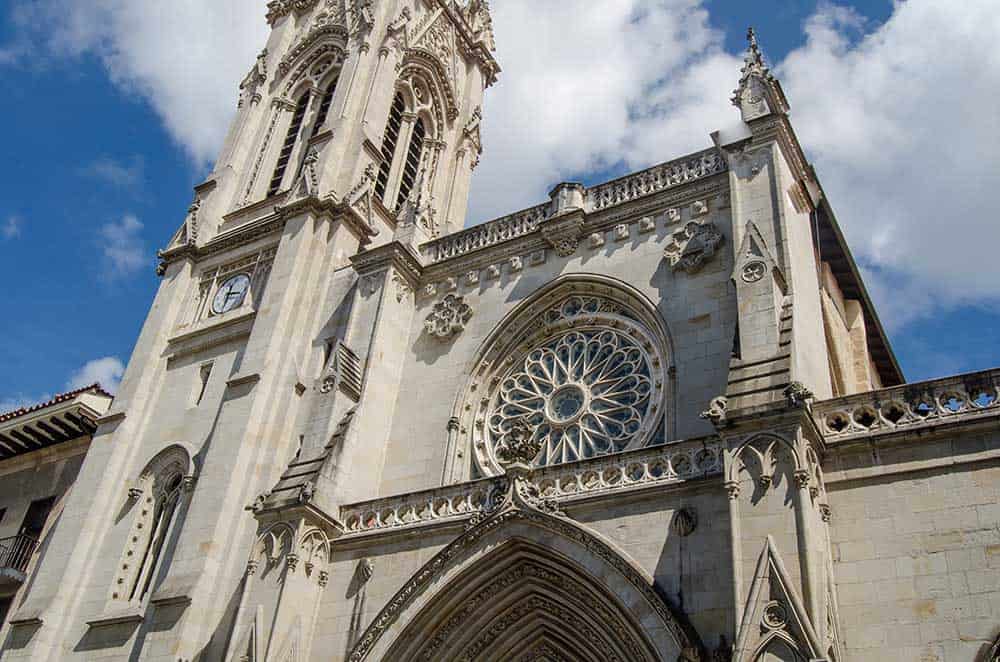 The cathedral is the most famous site in the city. Built in the 15th century, the Gothic style architecture stands out among the Neo-baroque buildings that are more commonly found in Old Town.

While most of the building has distinct gothic architecture, it also has Renaissance and Neoclassical additions. It costs money to get in and there are no guided tours, but it only takes a short while to tour the interior and check out the intricate designs.

There are many things to see in Bilbao, especially if you step inside the Guggenheim Museum. The world-famous museum houses a diverse collection of priceless art. 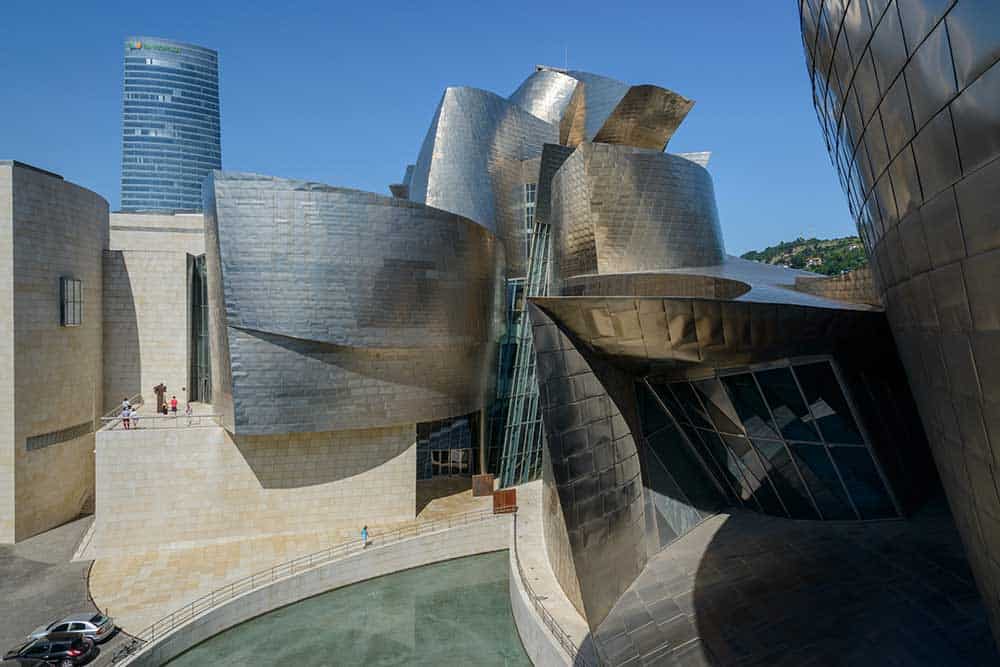 The exterior of the museum resembles a large metal ship. It was designed by Frank Gehry and features a variety of contemporary art. The best part, if you are short on time, is that you don’t necessarily need to go inside to view some of the art.

The courtyard area around the museum contains various installations, including a massive topiary in the shape of a dog by famed artist Jeff Koons. These pieces comprise what is called the Art District.

The Guggenheim is one of many museums that are part of the Solomon R. Guggenheim Foundation, with other Guggenheim sister-locations found in New York, Venice, Germany, and Mexico. 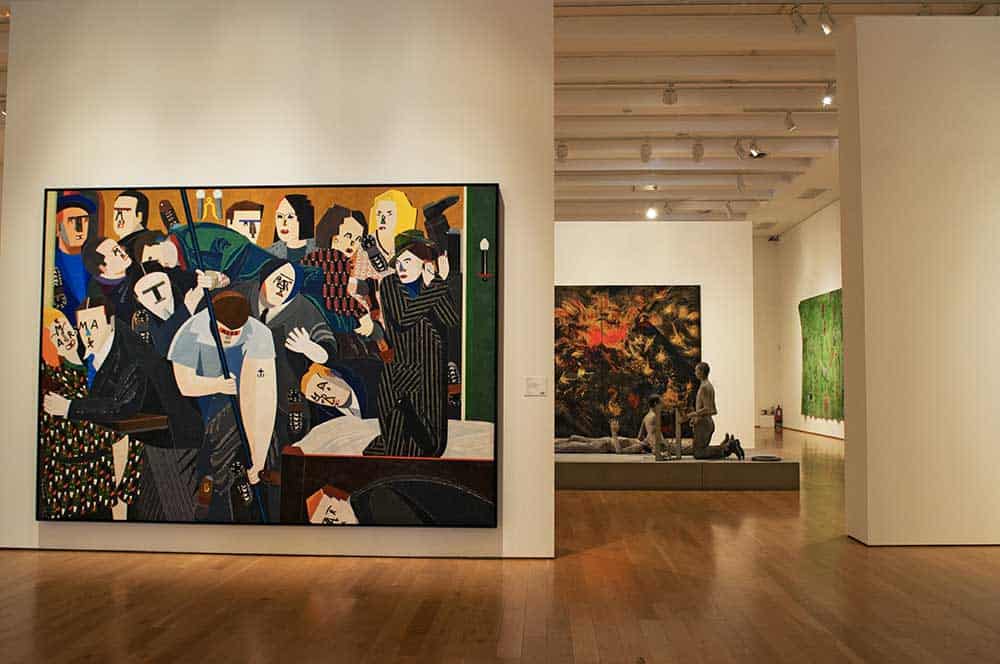 The building isn’t as elaborate as the Guggenheim, though it’s a worthwhile trip for art lovers and historians. The museum was built in 1945 and has several extensions, including Plaza Chillida, completed in 2001.

While it’s not as famous as the Guggenheim, the Museum of Fine Arts houses over 10,000 works of art, including more than 1,500 paintings and 400 sculptures. You can’t see it all in a single day, as the works are spread throughout 33 different rooms in several buildings.

Ride the cable railway to the top of Mount Artxanda

If you’re on a short trip and only have 24 hours in Bilbao, make sure you get to the top of Mount Artxanda for a panoramic view of the city. 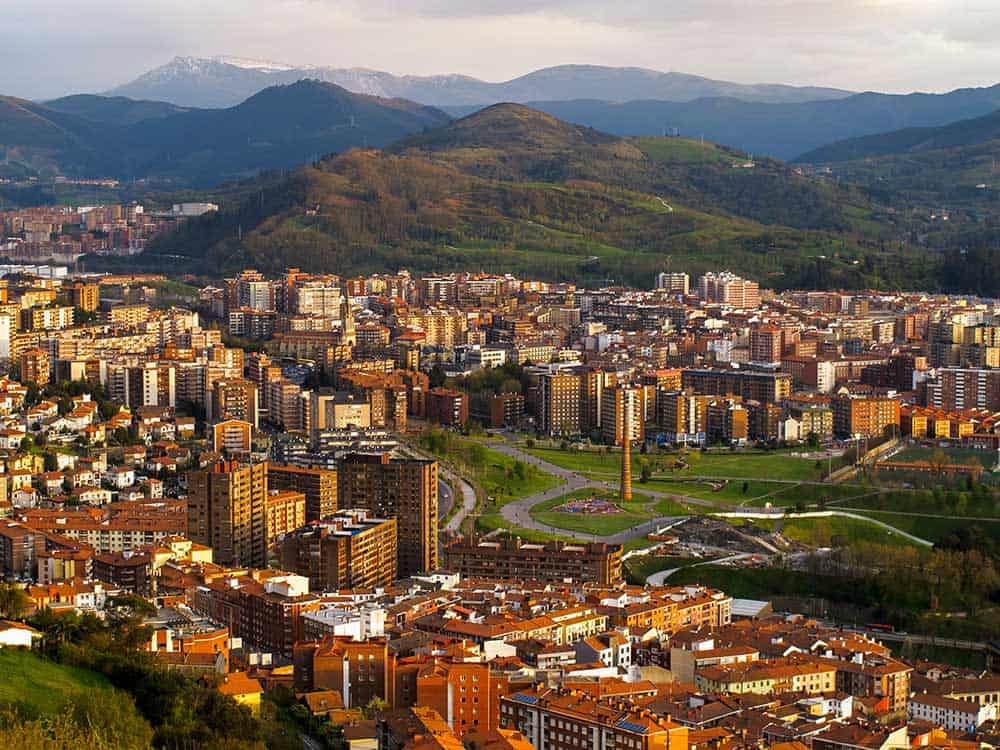 You don’t need to climb the mountain to reach the vantage point. A funicular cable railway takes you up and down. The entire trip takes less than an hour, including the time spent snapping photos of the cityscape.

The top of the mountain includes more than just jaw-dropping views. You can also spend time wandering around secluded walkways or take a break and enjoy a meal at one of the many restaurants.

If you want to know where to go in Bilbao for fantastic food, visit La Ribera Market. The market location was first used in the 14th century, but most of the buildings were built in the early 1900s. 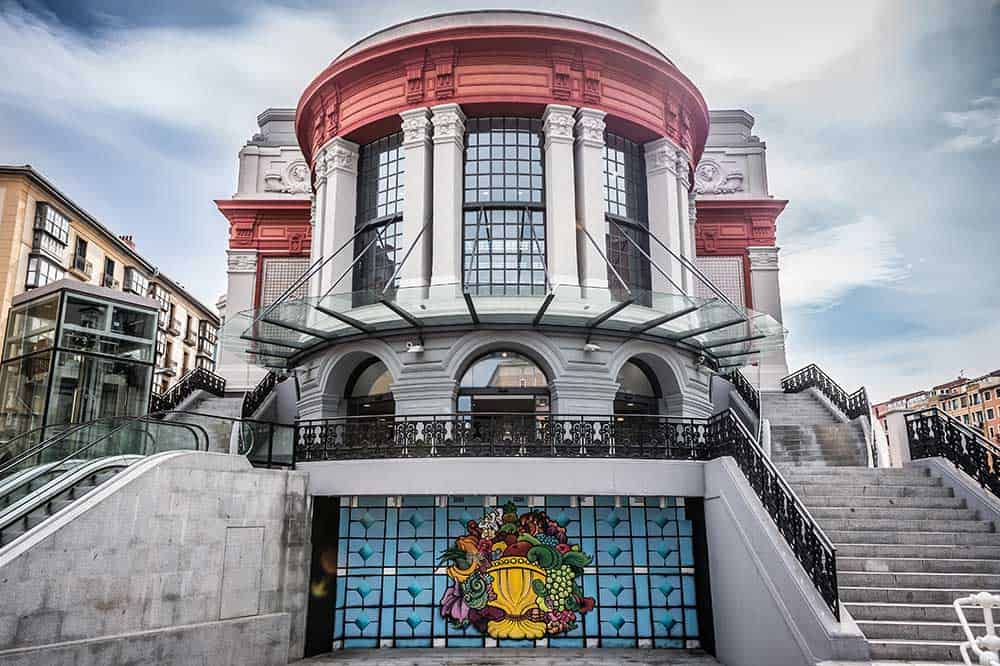 Always full of food and activity, the market is one of the best places to visit in Bilbao to indulge your taste buds. There is a wide selection of local delicacies made from fresh ingredients.

The cuisine is important to the citizens of Bilbao and you’ll find some truly original gastronomic creations. The market covers over 10,000 square metres, making it one of the biggest covered markets in Europe.

Besides food stalls, the market includes numerous restaurants, bars, and venues with live music. It’s a great place to visit any time of the day or night for lively entertainment and mouth-watering cuisine.

Take a boat down the Nervión River

Bilbao is a major port city, the stretch of land along the Nervión River is heavily developed with a mixture of modern high-rise buildings and historic sites. 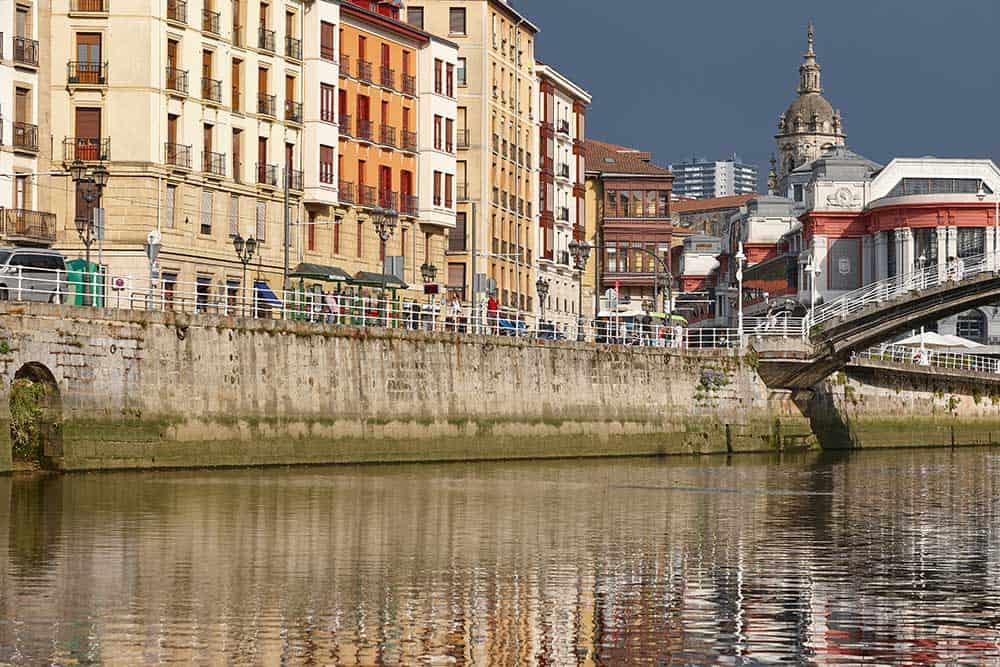 Walking the streets allows you to check out the urban scenery, but a boat ride on the river gives you an even better view of Bilbao sightseeing. The boat rides are available at various points along the harbour area.

The best time to go is in the late evening when the skies are dark. The city lights up and the reflections are visible across the top of the river.

From the river, you can see the Guggenheim, the market, and several of the other attractions that you’ve likely visited throughout the day.

Marvel at the Neo-baroque architecture of Teatro Arriaga

Another historic site and one of the main Bilbao points of interest, you cannot pass up the opportunity to visit Teatro Arriaga. 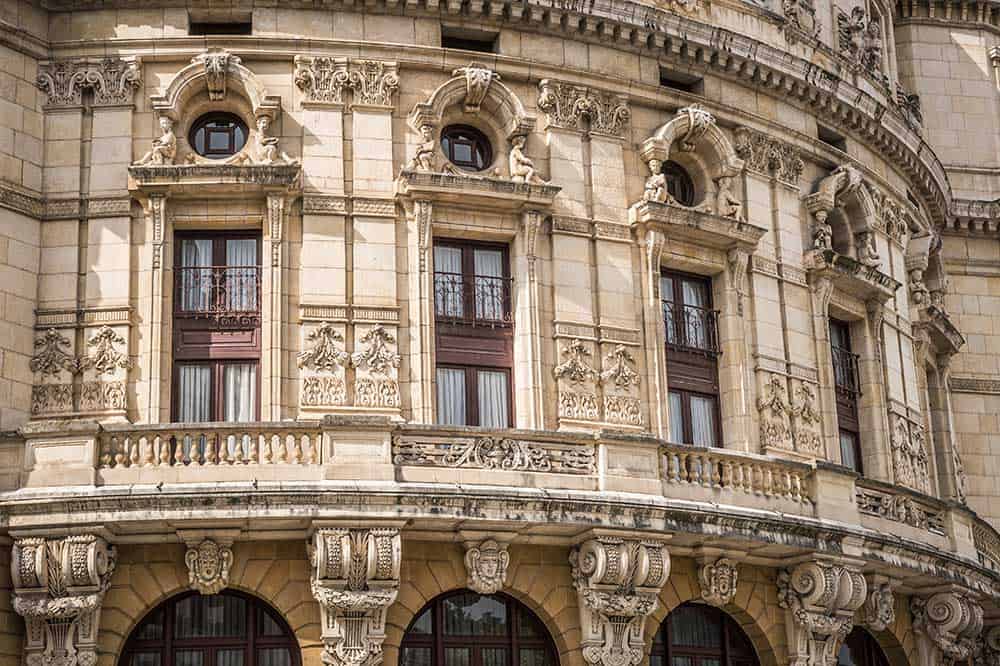 The massive building stands at the corner of two major streets. The prominent location ensures that the opera house remains a focal point in the city.

The Neo-baroque façade was designed and constructed at the end of the 19th century. It is a landmark site and marks the entrance to Old Town. You can’t miss it as you cross the bridge.

The theatre is open to tours when there are no performances booked for the day. If you have the chance, take the guided tour to learn more about the history of the region. It’s a fascinating experience and only takes a couple of hours out of your day.

Where to stay in Bilbao: The best hotels for sightseeing

Compared to sprawling cities like Madrid or Barcelona, picking out where to stay in Bilbao isn’t so difficult. For most travellers, sticking to the city centre will get you close to all of top points of interest in Bilbao and give you the chance to make the most out of your visit. Here are a couple recommendations…