With a wide range of things to do in Bugis, you may struggle to plan an itinerary. Bugis Street and the surrounding area have a colourful past. Thanks to major renovations, it’s become a major shopping destination and a top reason to travel to Singapore.

Bugis is known for its sprawling markets with cheap goods but there is a whole lot more to explore. Visit historic sites and try Singaporean cuisine while navigating the former red-light district.

Don’t know where to start? Find some ideas for your trip with this guide to the best Bugis attractions…

What to do in Bugis, Singapore: Top attractions & best places to visit

Shop dozens of retailers inside the massive Bugis Junction

A trip to Bugis Junction is one of the top things to do & see in Singapore due to the variety of shops, restaurants, and bars inside the shopping complex. It encompasses the old Bugis Street and includes a mixture of upscale developments with indoor and outdoor shopping areas.

Bugis Junction is the central point of interest in the district. It connects to the main MRT station and has a little bit of everything. The area has name-brand retailers, souvenir shops, and a variety of restaurants and cafes.

The original development included a large retail mall, office tower, and hotel. It also included most of Bugis Street and several blocks of pre-war shophouses. The combination of preserved shophouses and modern stores creates a unique atmosphere that perfectly captures Bugis.

Browse endless trinkets at the stalls in the Bugis Street Market

Located across from Bugis Junction, Bugis Street Market is another popular shopping destination. Comprised of hundreds of stalls, the bazaar has a wide selection of goods. It’s often described as a flea market with a hodgepodge collection of souvenirs and knickknacks. You can also find affordable electronics and knock-off products.

The rows of cheap stalls are a complete contrast to the upscale shopping in Bugis Junction. As one of the top points of interest in Bugis, this area is also incredibly busy. Expect crowds of tourists and vendors hollering to get your attention, no matter the time of the day.

Haji Lane is another spot with lots of shopping, as with most of the top tourist attractions in Bugis. The buildings on both sides of the street were recently renovated. The area now includes rows of fashionable shophouses with a mixture of cafes, bars, and boutiques with colourful storefronts. 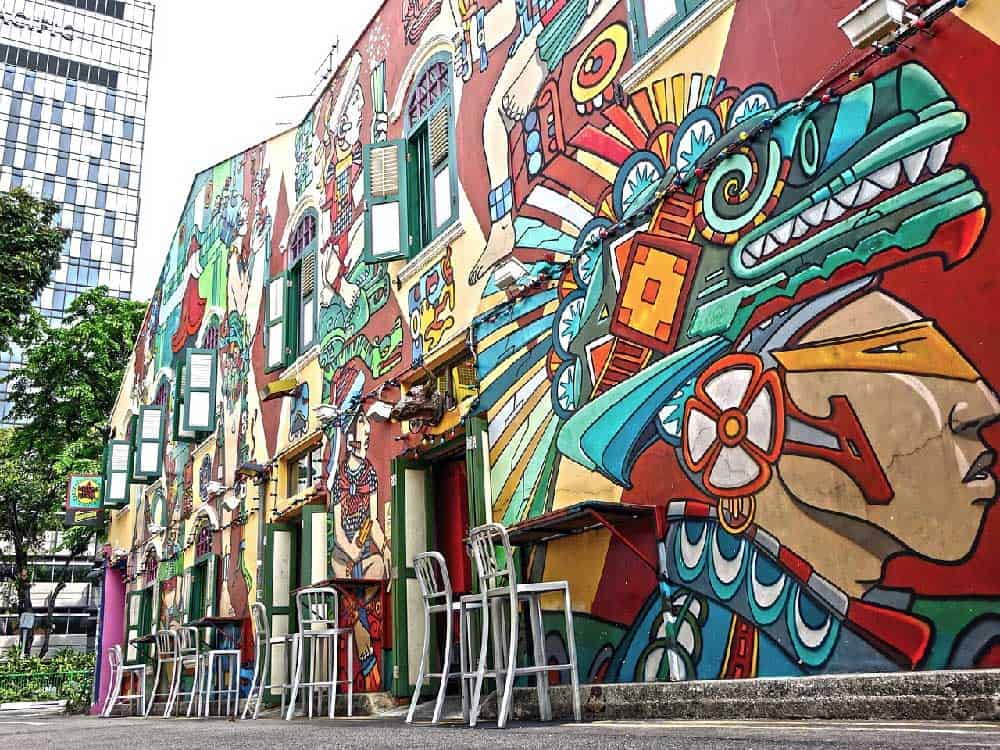 The collection of shops has become a favourite destination for chic locals and hipsters. It’s also a cultural destination. The exteriors of many buildings feature large murals, wall art, and graffiti from local artists. It’s a diverse part of the district. Along with hip spots, you’ll find western-style fast-food restaurants, bars, and shops selling cheap Chinese goods.

Spot the leaning tower of Singapore at Hajjah Fatimah Mosque

If you want to know what to do in Bugis after you finish shopping, visit the cultural sites starting with Hajjah Fatimah Mosque. It’s one of the older buildings in the region, built in 1846. It has a unique look, featuring a combination of European and Islamic design elements. 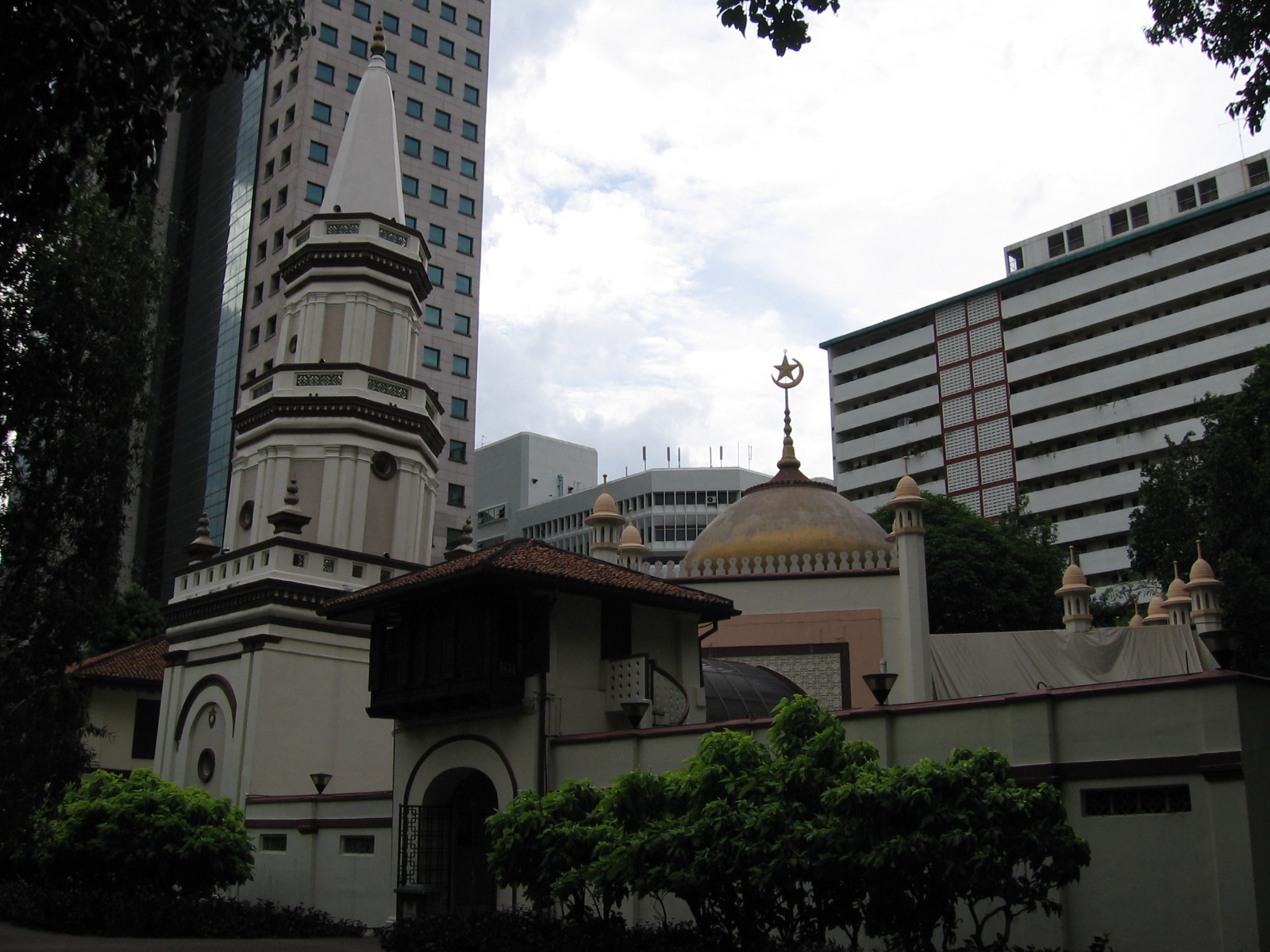 The mosque is also unique for being named after a woman. Hajjah Fatimah Sulaiman, a wealthy businesswoman, donated the land for the site of the mosque. The mosque is well preserved but the minaret has started to lean to one side due to a sandy foundation.

Some locals call it the leaning tower of Singapore. If you look at it from the right angle, you can see it tilting slightly to one side.

Bugis is home to a few temples worth visiting. If you can only find the time to visit one, check out Kuan Yin Thong Hood Cho Temple. This temple makes the list of Bugis points of interest for its architecture and history. The temple was built in 1884 and features traditional temple architecture of the period. 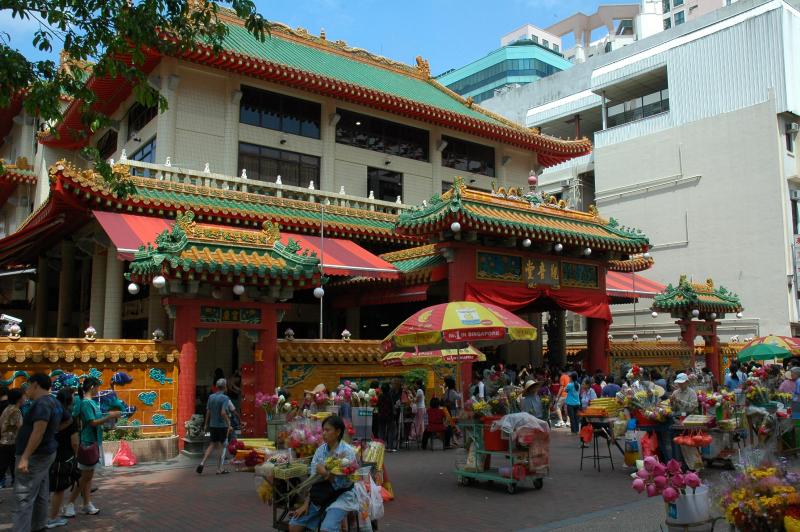 The temple is one of the few buildings remaining from before World War II, making it an important historic site. It’s also one of the busier spots with crowds of tourists during busy travel seasons.

If the temple is too crowded, try the one around the corner. Nearby Sri Krishna temple was built in 1870 for the growing Hindu community in Singapore at the time. The elegant décor makes it an interesting spot to visit.

View Bugis from a different perspective at the National Library

The National Library is one of the best places to visit in Bugis to get a better view of the district. Most tourists skip the large collection of books and travel straight to the top of the building. When you reach the top, you’ll find a rooftop garden.

The tenth-floor garden is the best spot for Bugis sightseeing, thanks to its panoramic views of the surrounding streets. On your way down, stop inside the café on the third floor to grab a quick meal or a cup of coffee.

The library also has a few exhibits, including an area on the top floor that covers the history of the library. If you’re travelling with kids, check out the children’s playroom.

Taste the local flavours during a stroll through CHIJMES

Want to know where to go in Bugis to try local cuisine? Visit one of the restaurants at the Convent of the Holy Infant Jesus (CHIJMES). It’s one of the oldest Catholic churches in Singapore, built in 1840. It’s now the centre of a cluster of restaurants, bars, and cafes.

The variety of dining establishments make CHIJMES a necessary destination for foodies. You can try authentic Singaporean cuisine and culinary treats from other Asian regions. In the evening, the area often has live music and a vibrant atmosphere, attracting tourists and locals.

The only drawback is the size of the crowds. You may need to reserve a table at some of the high-end restaurants.

While you won’t find paintings from world-famous artists, the Singapore Art Museum has a large collection of work from local artists. The museum showcases contemporary local art, giving you an intimate look at the culture of the region.

With many things to see in Bugis, travellers often skip the museum, which makes it a peaceful place to explore. You can leisurely walk the halls and take your time appreciating the artwork.

The museum is also going through a few renovations. Depending on when you visit, some of the exhibits may be closed.

Where to stay: The best hotels in Bugis

On top of offering tons of things to see & do, Bugis is one of the best places to stay in Singapore. There’s a diverse selection here with everything from budget hotels to some of the top luxury hotels in Singapore. Here are a few of the best hotels in Bugis to help with your search…