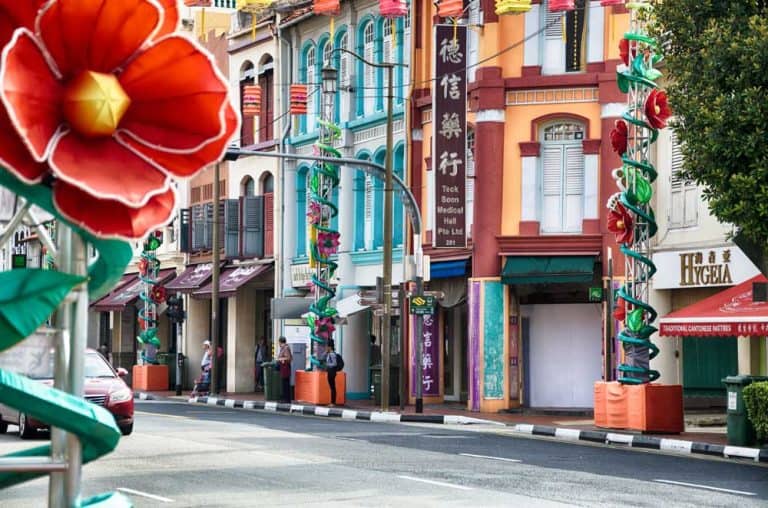 Travelling to Singapore? You’ll likely spend a good chunk of your time strolling the streets of Chinatown!

Singapore’s Chinatown is among the city’s most atmospheric areas. It’s famous for its colourful heritage buildings, hiding old Chinese shophouses. The architecture hearkens back to a bygone era in Singapore’s history.

It’s hardly a surprise that there are plenty of superb things to do in Chinatown, Singapore. The Chinatown area is home to some of the top tourist attractions in Singapore. From scouring temples to chowing down on all the food-crazy city’s best dishes, it’s all here!

Ready to plan your day in Singapore’s most interesting district? Here’s a guide to the best places to visit in Chinatown, Singapore.

What to do in Chinatown, Singapore: The top attractions & best places to visit

Eat to your heart’s content at Chinatown Complex Food Centre

After several visits to Singapore, I found myself roaming the food stalls of the Chinatown Complex Food Centre more than a few times. It’s hardly difficult to find a good meal in Singapore. But if you’re looking for a massive selection AND some superb quality, this is the place to get ‘er done. 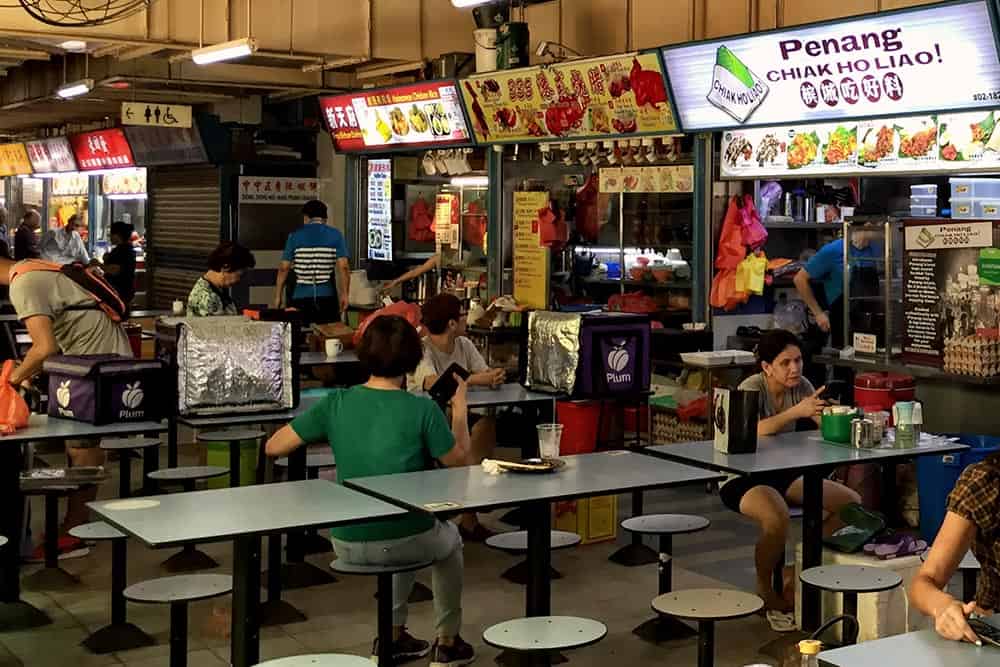 The Chinatown Complex Food Centre is one of the best hawker centres in Singapore. It’s actually the biggest food centre in the city! Expect nothing short of street food brilliance when you let your tastebuds ride the crazy culinary train here.

You can’t go wrong with most of the stalls at this ginormous food court. Need some ideas? Give the Shanghai-style steamed dumplings at China La Mian Xiao Long Bao (#02-135) a try. The wonton noodles at Lao Ren Jia Roasted (#02-03) are an equally delicious late-night snack. Or slurp on the the katong laksa at Terry Katong Laksa (#02-04) to get a taste of some of the best food in Singapore.

Get spiritual at the Buddha Tooth Relic Temple

Singapore isn’t well-known for its temples. So it’s no surprise: Checking out the massive Buddha Tooth Relic Temple in Chinatown is must. It stands out among the top things to do in Singapore.

Clinging to the edge of Chinatown, this eye-popping five-storey temple is unmissable. And isn’t just for peering upon at street-level; it’s as stunning inside as out. 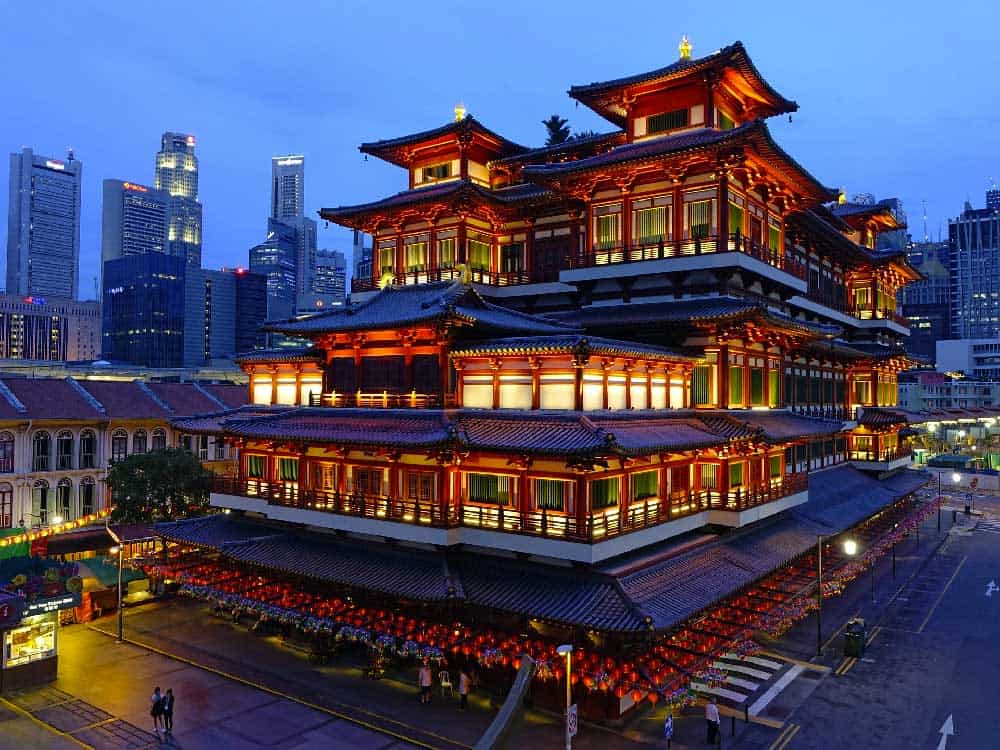 Entering the temple, you’re greeted by a cavernous main hall adorned with bright reds and gold.

After soaking up the atmosphere, head up to the 4th floor. You’ll find the temple’s namesake sacred relic here. It’s enshrined inside a two-metre-high gold stupa.

One level up, you’ll relish in rooftop views of Singapore along with a pagoda and prayer wheel.

Despite its ancient Buddhist mandala-inspired looks, the Buddha Tooth Relic Temple is only a young pup. It’s got less than 20 years of history behind it.

Nonetheless, while wandering about Chinatown the temple is a must-see. Don’t miss a chance to step inside for a glimpse of its sacred Buddhist art & artefacts.

Sure, this next attraction might see a little out-of-place in Singapore’s Chinese enclave. Surprisingly though, Sri Mariamman Temple was Singapore’s first Hindu temple. Today, it’s still one of the finest Hindu temples in the city.

Unlike Buddha Tooth Relic Temple, this place of worship has a few centuries of history behind it. It dates back to the early-19th when an influx of Tamil immigrants from Southern India flocked to Singapore. 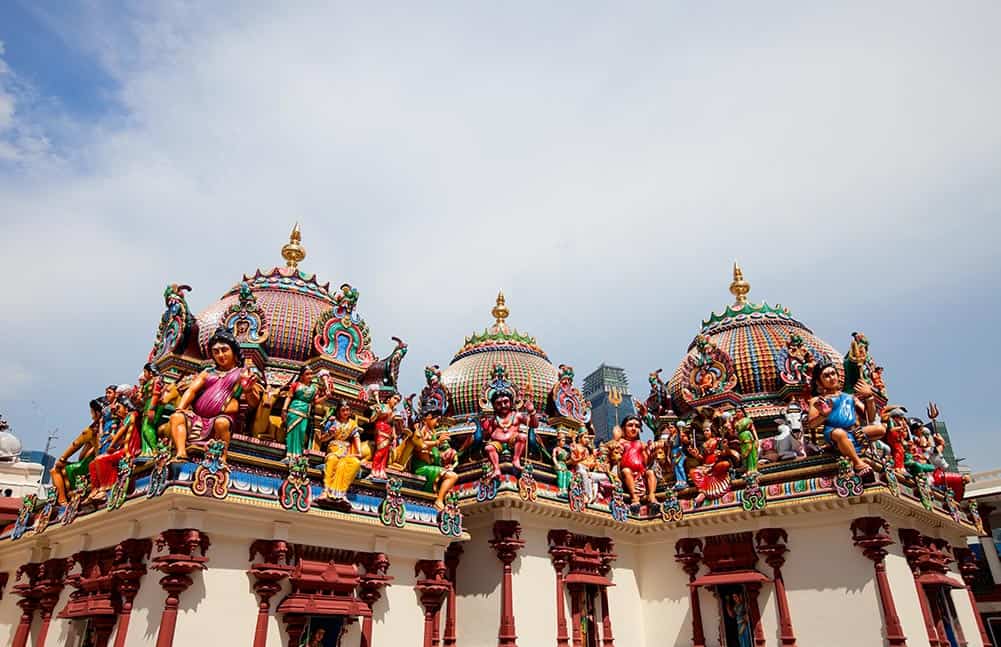 The architecture of Sri Mariamman is typical of Dravidian temples. It features an ornate six-tiered entrance tower (gopuram). The tower is adorned with colourful figures drawn from Hindu culture.

The vivid colours continue in the interior. Inside, you’ll dazzle at a handful of paintings and shrines. They’re dedicated to several Hindu deities including Draupadi and Lord Krishna.

Relive the past the Chinatown Heritage Centre

Intrigued by history? Throw the Chinatown Heritage Centre into your Singapore itinerary.

This museum is located on Pagoda Street betwixt the two main drags of New Bridge and South Bridge Roads. It occupies several floors of a former Chinese merchant house in the heart of Chinatown. 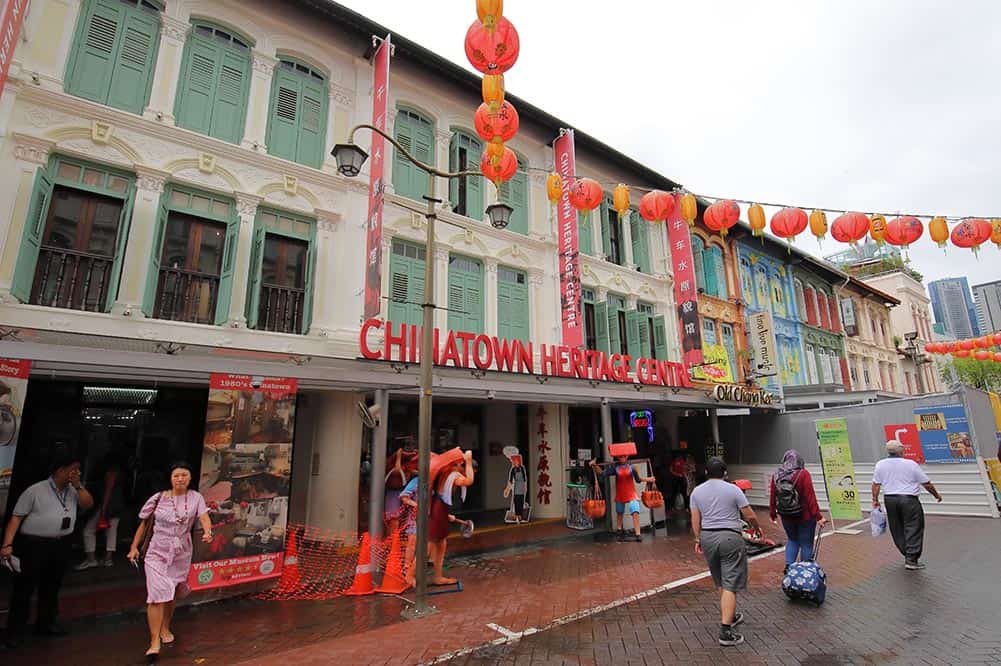 In the museum, you’ll discover variety of interesting exhibits. Taken as a whole, they detail the history of Singapore’s first Chinese immigrants.

At the Chinatown Heritage Centre, you’ll watch Chinatown unfold before your eyes. The exhibits here whisk you through the district’s journey from one of the city’s most ill-reputed areas to one of its most vibrant.

Be sure to come early or book your Chinatown Heritage Centre ticket online to beat the crowds.

You didn’t think I’d leave you hanging with just one food recommendation in Singapore’s Chinatown, did you? After you’ve indulged at Chinatown’s mainstay hawker centre, let’s get local. Head a few blocks north to discover the Hong Lim Market & Food Centre.

The popular food centre is tucked away from the main tourist avenues of Chinatown. It’s located off of Upper Hokkien south of the stunning PARKROYAL on Pickering hotel.

The Hong Lim Market & Food Centre is a two-floor celebration of all the best Singaporean food. It’s bound to send your tastebuds into a frenzy. 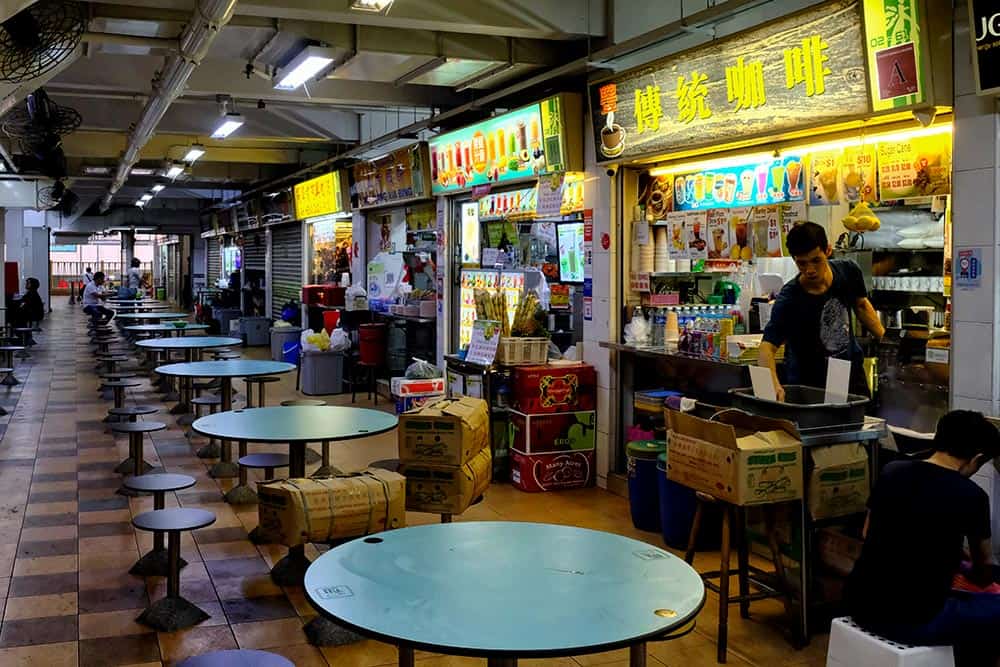 Despite its lack of name recognition and off-beat location, the Hong Lim Market & Food Centre shines. It’s home to some of the tastiest food stalls in Singapore. There’s even a couple brilliant Michelin-starred choices here!

Be sure to ramble over to Ah Heng Curry (#02-57/58) and Famous Sungei Road Trishaw Laksa (#02-66) to taste their signature dishes. If you’ve got cravings for a little spice, these dishes will sit among your best memories in Singapore!

Okay, maybe just two Chinatown food recommendations would do. But, hey, this is Singapore, so here’s one more…

If you’re wandering around the area, you’re bound to stumble upon Chinatown Food Street. (It’s officially known as Smith Street, but you’ll soon discover: its moniker is more fitting!)

This pedestrianized street stretches between New Bridge Road and South Bridge Road. And the street truly lives up to the name. It plays host to a multitude of restaurants, bars, and food stalls. 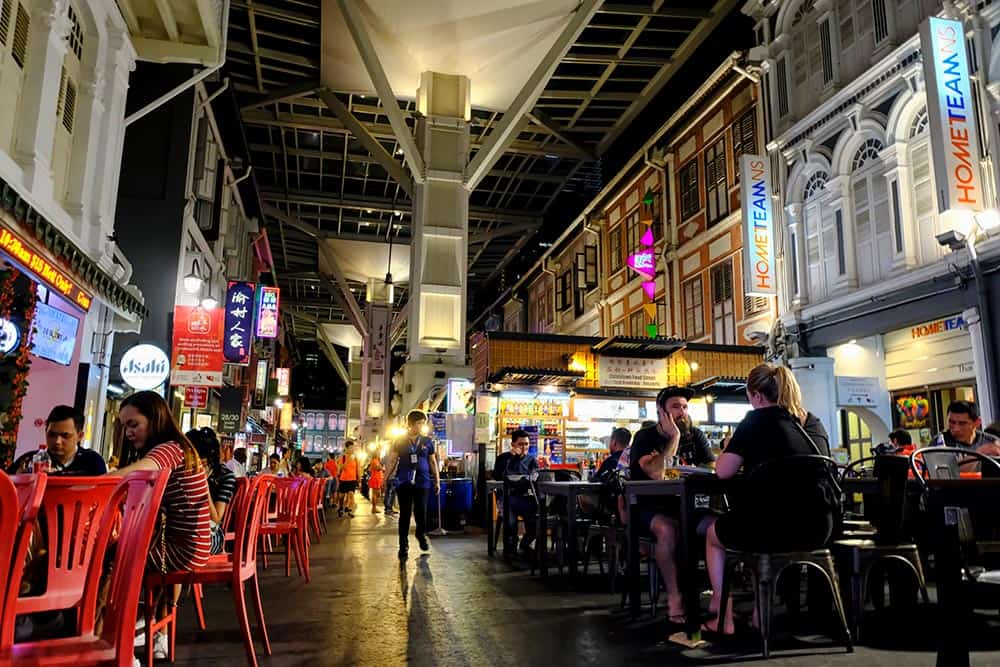 Prices along Chinatown Food Street are more expensive than at nearby hawker centres. The atmosphere, though, is well-worth taking in.

The street is lined with beautiful restored Chinese shophouses hiding restaurants. The dining areas pour onto the street, protected under canopies. There’s even a cooling system here to suck out the humidity and keep you cool.

Mixed with the soft lamp light and neon signs, Chinatown Food Street delivers a lovely scene. It’s a fantastic place to enjoy some food and drinks to unwind after a day of sightseeing in Singapore.

Thought Buddhist or Taoist temples would comprise the bulk of Chinatown’s religious buildings? Masjid Jamae, like its Hindu temple neighbour, throws a wrench into the theory. 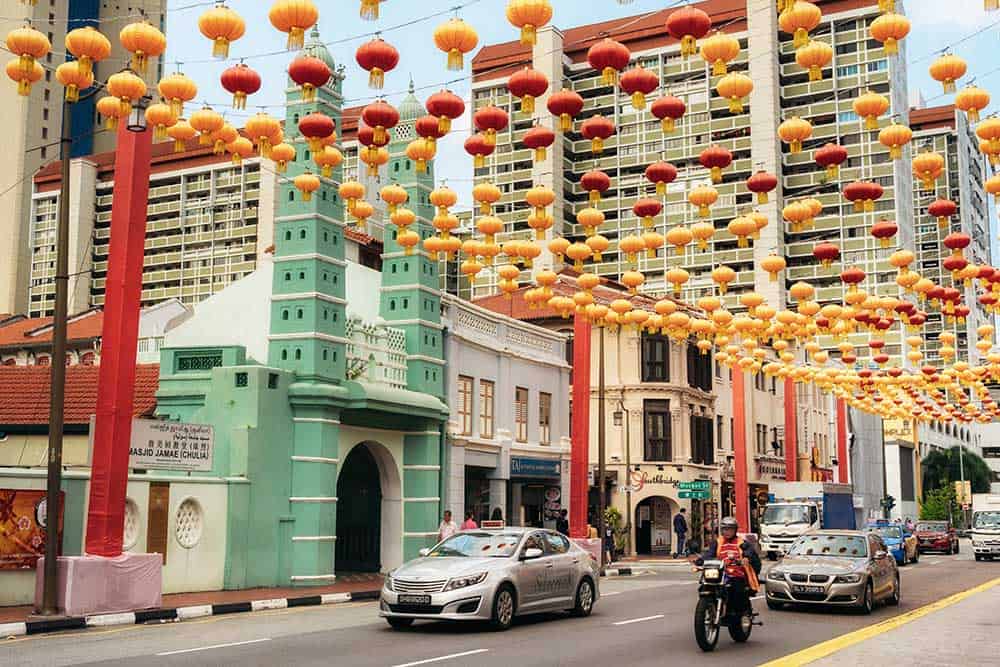 Masjid Jamae, also called Masjid Chulia, was built in the 1820s. It’s one of the oldest mosques in Singapore.

The mosque was one of three built in Chinatown by Singapore’s early Tamil Muslim immigrants. It’s still one of the only mosques in the city to offer services in Tamil.

What’s unique about Masjid Jamae is its assortment of architectural styles. The main gate is South Indian in flavour. It exhibits classic Indo-Islamic design its its dual minarets and palace façade.

Inside Masjid Chulia, you catch a glimpse of non-Islamic influences. Look for the two rows of Doric columns and Chinese-inspired green-tiled windows.

Although it’s outside the boundaries of Chinatown proper, don’t skip out on a visit to Thian Hock Keng Temple.

Unlike the less-than-20-year-old Buddha Tooth Relic Temple, Thian Hock Keng is the real deal. It’s the oldest Chinese temple in Singapore, dating back to 1839. 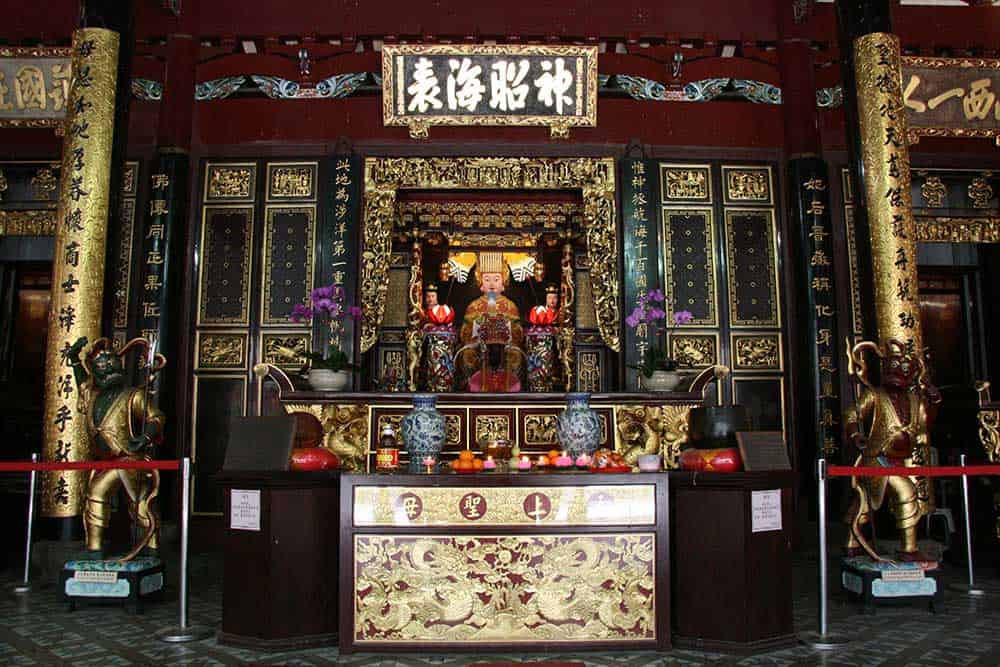 This Hokkien folk temple is dedicated to Mazu, the Goddess of the Sea. Surprisingly, the temple once sat upon Singapore’s seafront.

The design of Thian Hock Keng Temple is quite remarkable. Visitors will relish in the temple’s Fujian architectural style. It’s distinguished by its intricate carvings of folk deities and dragons.

Singapore’s Chinatown can sometimes feel like dense urban low-rise planning at its finest. A break at nearby Ann Siang Hill Park tempers the feeling. (Kinda.)

The small park is snuggled behind the lovingly-restored historic Chinese merchant houses of Ann Siang Road. It offers a quick escape from the buzz of central Singapore. 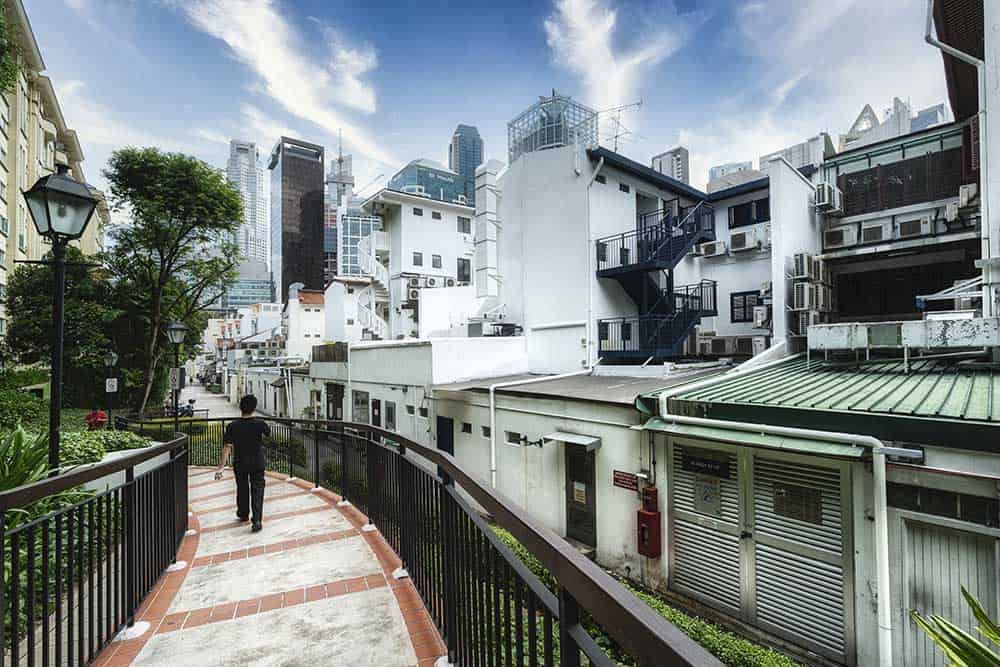 There’s a wide array of interesting tree species at Ann Siang Hill Park to scope out. Wandering about, you’ll see cinnamon, nutmeg, breadfruit, and tamarind trees. The views towards Chinatown, Telok Ayer, and the Singapore CBD are also quite impressive.

After you’ve snuck in a few quiet moments at the park, cozy up with a quick bite & a drink nearby. There’s a wide selection of hip cafés & restaurants along Ann Siang Road and nearby Club Street.

Another recommendation for foodies? You bet. (And, yes, eating to excess is one of the must-do activities in Chinatown!)

Let me give a thumbs up to (yet another) Singapore Chinatown food hotspot: Maxwell Food Centre. 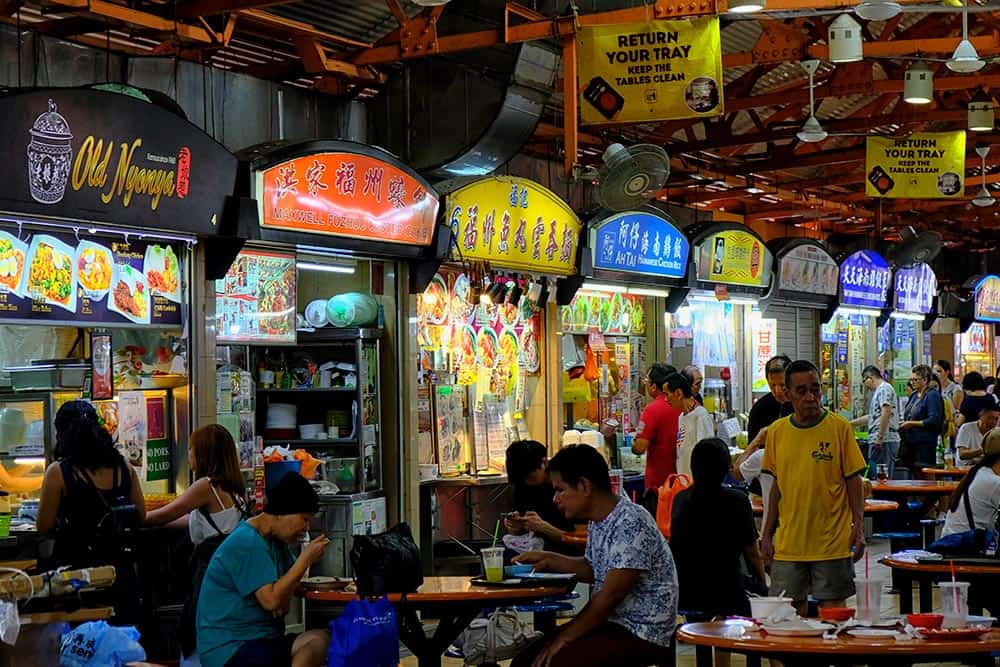 Looking for one of the hawker centre’s specialities? Queue up at Tian Tian Hainanese Chicken Rice. The serve rice that, as the late Anthony Bourdain put it, is “so fragrant & delicious that it can be eaten on its own.”

Live it up on Keong Saik Road

Even in an ever-changing city like Singapore, the story of Keong Saik Road is impressive. Once a red-light district, the area has transformed itself, in recent years, into one of the city’s coolest neighbourhoods. 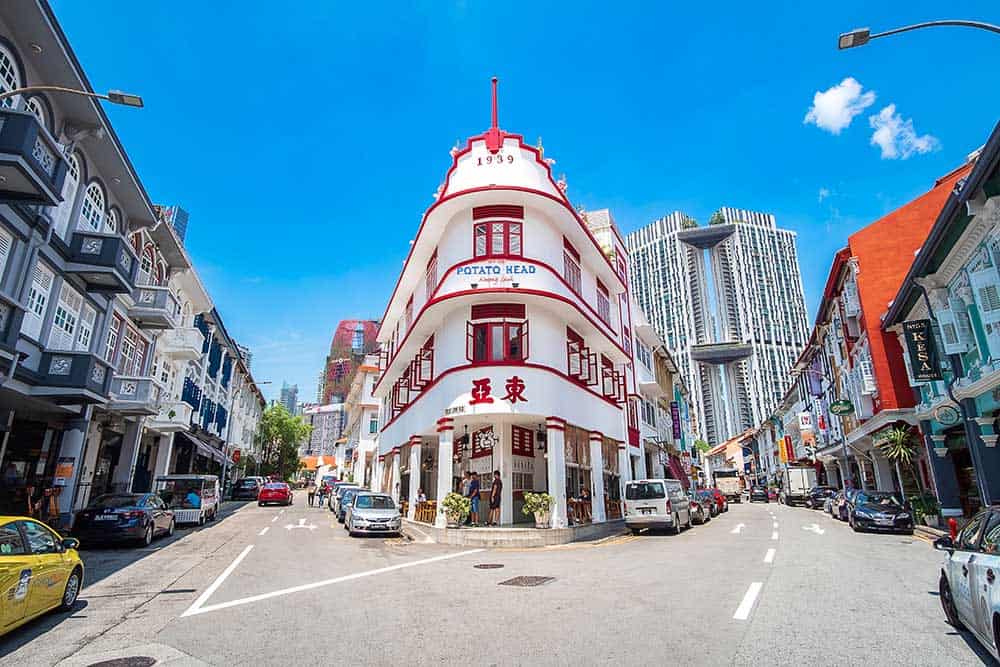 Whether by day or night, Keong Saik Road will catch your eye. It’s famous for its handsome assemblage of restored shophouses. Inside, you’ll find some of the best places to eat & drink in Singapore. There’s a little of everything here—from hipster-approved restaurants to after-work cocktail hangouts.

One of the most famous haunts along Keong Saik Road is Potato Head Singapore. The popular hangout occupies an eye-popping heritage building that straddles the sharp corner of Keong Saik and Teck Lim Road.

Potato Head has a little of everything for travellers. Pop in to enjoy a gourmet burger or to grab a tropical cocktail at the South Pacific-inspired rooftop bar.

Where to stay: The best hotels in Chinatown, Singapore

Thanks to its central location, Chinatown is one of the best places to stay in Singapore. If you base yourself here, you’ll have no problems finding comfortable accommodations. Here a few of the best hotels in Chinatown, Singapore, to start your search…