If you’ve got your eyes set what to do in Seoul, digging into the best things to do in Insadong should be high on your agenda.

The Insadong area harkens back to the more distant past of the Korean capital. Taking on most popular tourist attractions in Insadong, you’ll browse through antique shops and sip cha in traditional Korean teahouses.

Ready to plan out where to go in Insadong? Rev up your Insadong itinerary with this guide to the top Insadong attractions and best places to visit in Insadong…

What to do in Insadong: Top attractions & best places to visit

Sip on some cha and snack at Shin Old Tea House

One of the best cafés in Seoul, Shin Old Tea House is a pleasant getaway from the bustle of Insadong, Among all the best places to see in Insadong, visiting this classic teahouse is a must. 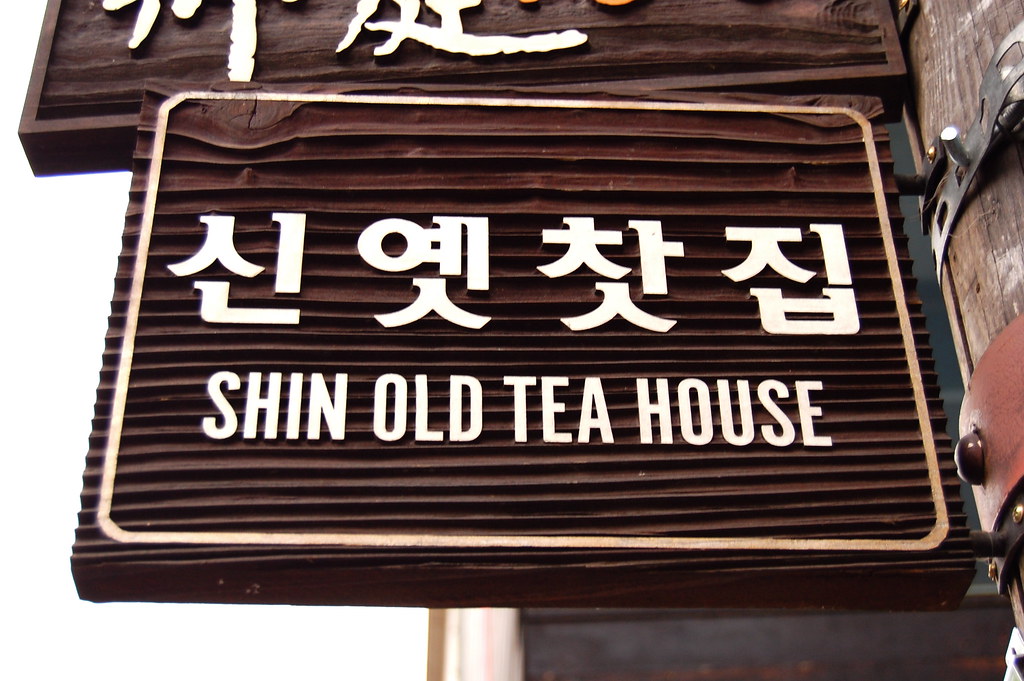 Getting to Shin Old Tea House: From Anguk Station (Line 3), take Exit 6 towards Insadong. Turn left on Insadong-gil, one block ahead.

Walking about half a block, turn right at the small alley just before seeing Ssamziegil on your left. The café will be in the fourth building to your right.

Opening in 1983, the Kyung-in Museum of Fine Arts showcases the work of local artists and sculptors through its five exhibition halls & galleries.

Aside from the actual exhibits at the Kyung-in Museum of Fine Art, the museum’s architecture is, on its own, quite impressive, and is near the top of the list of what to see in Insadong.

Throughout the complex, natural light and well-manicured flora blend with both modern and traditional elements. It’s created an environment that, in many ways, reflects the whole city’s own tug-of-war between past and future.

Once you’ve revelled in the artwork and architecture of the Kyung-in Museum of Fine Art, pop into its traditional teahouse where you can enjoy a herbal tea with a refreshing fruit ice cream.

Getting to Kyung-in Museum of Fine Arts: Hop onto Line 3 of the Seoul metro to Anguk Station. From Exit 6, walk a block and turn left on Insadong-gil.

Walk two blocks, turning left at Insadong 10-gil, the street after Ssamziegil. The museum entrance is a couple buildings up to your left.

Witness the birth of modern Korea at Tapgol Park

Touted as the first modern urban park in Seoul, Tapgol Park remain one of the most important sites in Seoul, and one of the top things to see in Insadong.

Tapgol Park charms visitors with a trove of historical monuments. In fact, the park’s storied past set the stage for South Korea’s independence in the post-WWI era.

The centrepiece of the Tapgol Park, Wongaksa Pagoda, dates back to 1467. At this time, the area was set within the grounds of the most important of the Jogye order of Korean Buddhism.

This ten-level stone pagoda was responsible for the park’s old name, Pagoda Park.

Wongaksa Pagoda is the only remnant from the 15th-century Wongaksa Temple. In modern times, it remains an important Korean cultural relic. 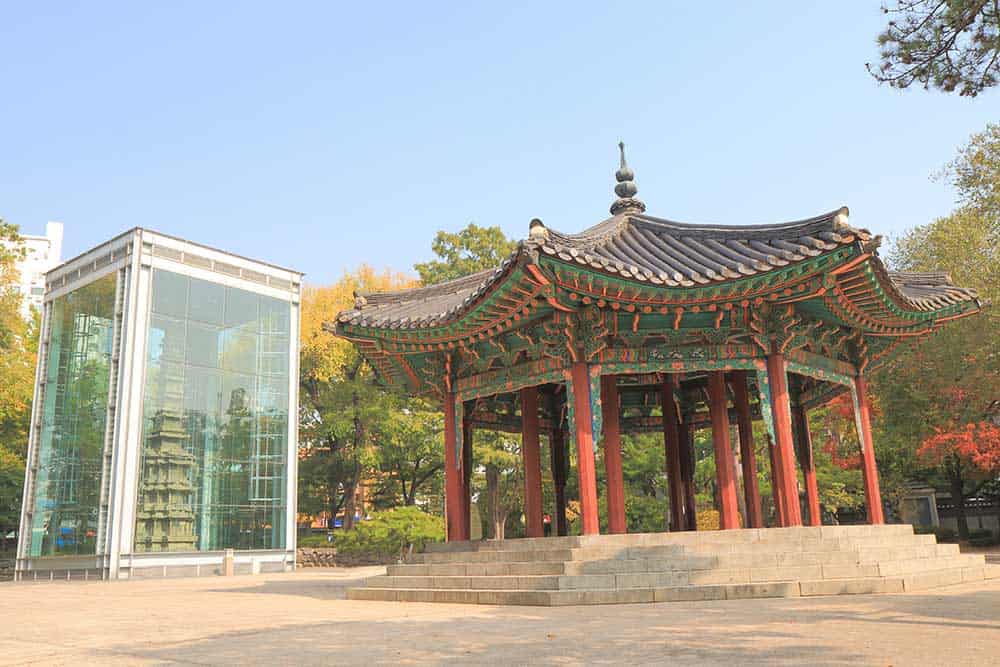 Much later in the country’s history, during the 20th cenutry, Tapgol Park set the stage for Korea’s independence.

It was at Tapgol Park that resisters first read the Korean Declaration of Independence. The event set into motion the bloody days of the March 1st Movement. Every March 1st, Tapgol Park hosts a memorial service to remember the fallen.

Besides its historical significance, Tapgol Park remains one of the premier places to go in Insadong and in Seoul to get some fresh air. It’s a wonderful place to hang out with friends, walk around, or simply chill out and leave the urban bustle behind.

Getting to Tapgol Park: From Jongno 3-ga Station (Lines 1, 3 & 5), take Exit 1 onto Jong-ro. It’s about a five-minute walk west along the street to Tapgol Park.

Discover the world of tea at the Beautiful Tea Museum

You don’t need to be a bonafide tea lover to get a kick out of the Beautiful Tea Museum in Insadong.

At the Beautiful Tea Museum, you’ll find everything from ceramic tea cups & saucers to exhibits detailing tea traditions from various countries in Asia.

Once you’ve travelled around the world of tea, plop down and relax at the on-site café where you can choose to sip 130 different teas from Korea, China, Tibet, Japan, India, Sri Lanka and more.

Cross over Insadong-gil until the street becomes a smaller alleyway. The museum will be on your left, three buildings up.

For shoppers looking for a break from the brand-heavy streets of Myeongdong, the shopping mecca of Ssamziegil lies in wait.

Famous for its unique spiralling outdoor courtyard walkway, Ssamziegil has become one of the top points of interest in Insadong.

Ssamziegil is home to over 70 stores. Browsing Ssamziegil, you’ll get to drop your won on everything from handmade goods to yummy Korean food. 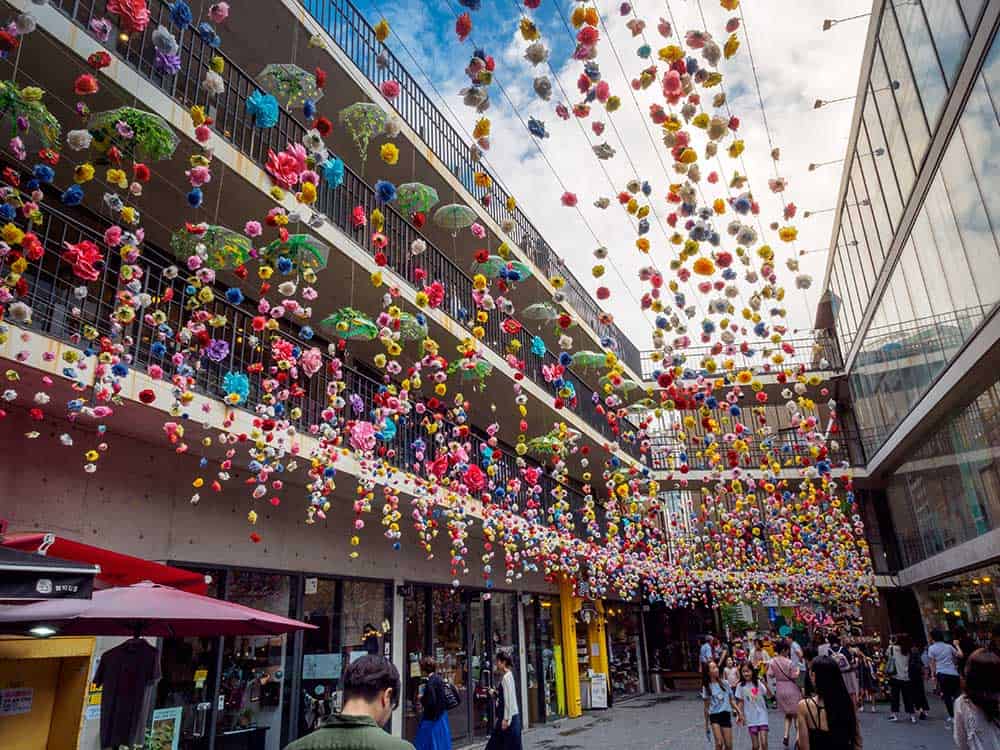 Although fresh-faced and opened in 2004, Ssamziegil blends surprisingly well with the traditional aesthetic and spirit of Insadong.

Many of Ssamziegil’s best finds are unique to Insadong, handcrafted by local artisans in the complex’s own workshops and galleries.

While visiting Ssamziegil, don’t miss out on visiting the Sky Garden. Located on the 4th-floor rooftop, the Sky Garden delivers sweeping vistas over Insadong and Seoul.

Getting to Ssamziegil: As Sssamziegil lies on the main drag of Insadong, finding it is a cinch. Make your way to Anguk Station (Line 3), using Exit 6 to get to street level.

Walk straight along Yulgok-ro, turning left at Insadong-gil. Continuing south along Insadong-gil, you’ll see Ssamziegil about two blocks ahead to your left.

Get silly at the Alive Museum

Following the lead of the popular “trick-eye” museums, the quirky Alive Museum opened to great fanfare in 2014. It’s since become one of the best places to visit in Insadong for tourists and locals alike.

Like all of its brethren, including the similar Trick-Eye Museum in Hongdae, The Alive Museum uses parallax effects and other optical illusions to draw visitors into its outlandish scenes.

At the over hundred exhibitions in the Alive Museum, you’ll insert yourself into artwork that tackles everything from getting chomped on by Marilyn Monroe to boxing a kangaroo.

If you want to get a little extra action in, combine your visit to the Alive Museum with the Dynamic Maze, an interactive and challenging obstacle course that’ll test both your mind and body.

Getting to Alive Museum: Using Seoul’s public transportation, scoot over to Jongno 3-ga Station on Lines 1, 3 or 5. From the station’s Exit 1, walk west along Jong-ro, turning right at Samil-daero. Turn onto Insadong-gil. The museum will be on your righthand side after the

Chow down on delicious Korean food

Not as if it’s a secret, but Insadong is one of the best places to eat in Seoul.

Along the main drag of Insadong-gil, there’s no end to the culinary adventures awaiting your tastebuds. 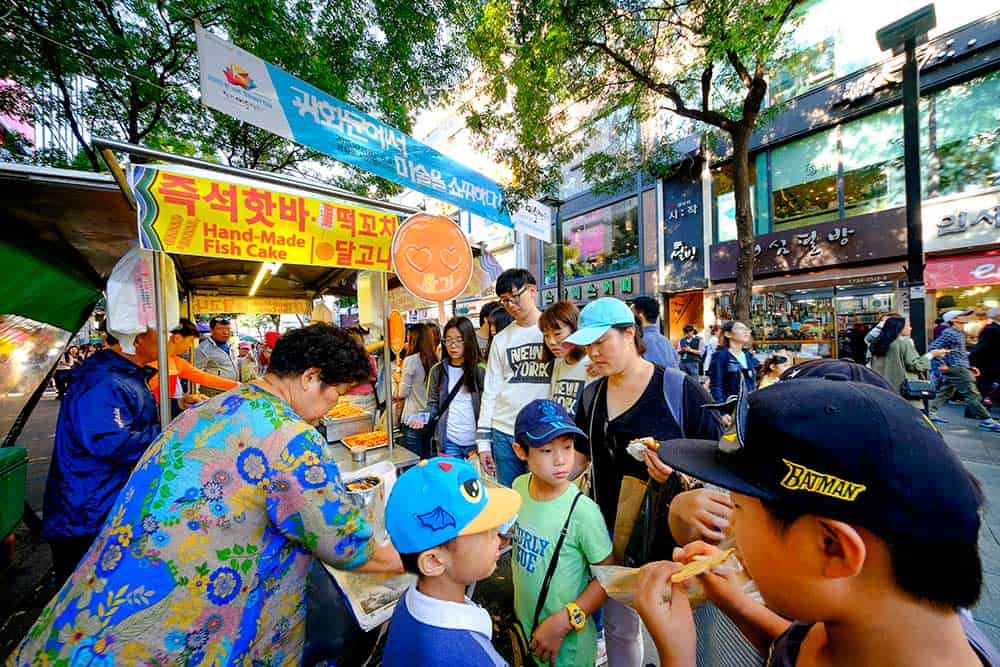 From Korean street food staples like mandu (Korean dumplings) and tteokbokki (spicy rice cakes) to more substantial Korean dishes like bibimbap and bulgogi, everything you crave will be at your fingertips here.

Looking for some of the best food in Seoul? Check out some of these top Insadong restaurants…

Where to stay: The best hotels for sightseeing in Insadong

Digging into all the best things to do in Insadong, it’s hardly a surprise that this traditional neighbourhood is one of the most popular places to stay in Seoul.

Ready to find the perfect Insadong accommodations? Here are a couple of the best Insadong hotels…

Where to go in Insadong: Top points of interest & places to see

Beyond Insadong: Where to visit next in Seoul