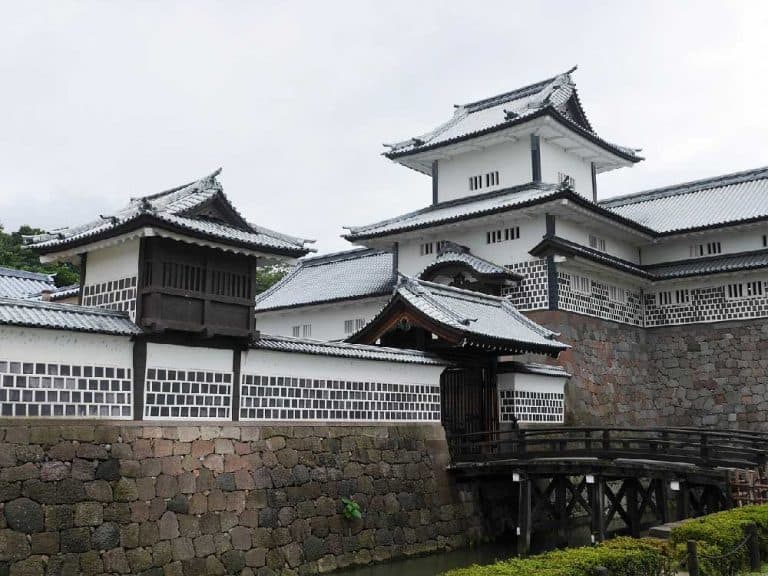 Between the mountains and the sea, you’ll find the culturally significant city of Kanazawa. Often called Little Kyoto, the city is home to a wide assortment of attractions that help showcase the heritage and history of the region.

From the central castle park to the surrounding historic districts, there are many places to visit and things to do in Kanazawa.

If your next trip to Japan takes you through this overlooked jewel, you should have no problem exploring most of the city in a day or two. The only challenge is deciding where to start.

Need help planning your trip? Get started with this guide to the best Kanazawa attractions…

Stroll through the tranquil landscape at Kenrokuen

Kenrokuen remains one of the best places to visit in Kanazawa. In fact, it’s regularly celebrated as one of the top three Japanese gardens. 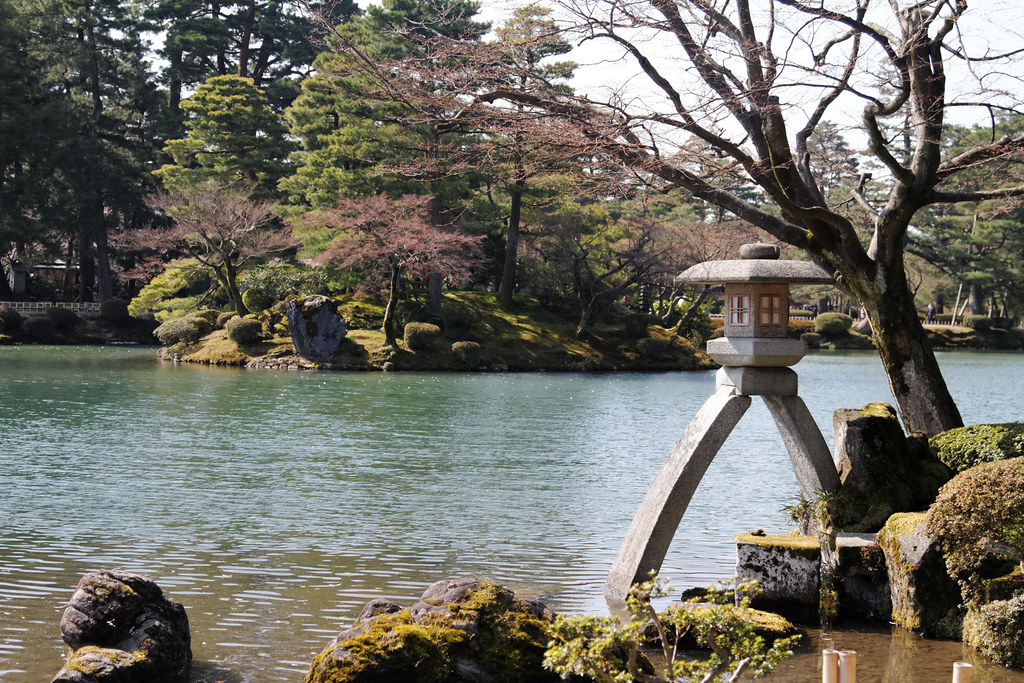 The walking paths take you through a carefully manicured landscape with gentle streams, ponds, and native plant life.

While at the garden, visit Seisonkaku Villa in the southeast corner. It’s an Edo period villa built for the mother of a former lord. You can also enter the garden through the villa, making it easy to visit both spots.

Ensure that you add this spot to your Japan itinerary, especially if you’re visiting during cherry blossom season. With the trees in bloom and the area lit up with lanterns, the garden has a magical atmosphere.

Explore the reconstruction at the Kanazawa Castle Site

Any list of what to do in Kanazawa includes a trip to the site of the former Kanazawa Castle. The castle no longer stands but a few of the structures remain. Two storehouses and a massive gate still stand. 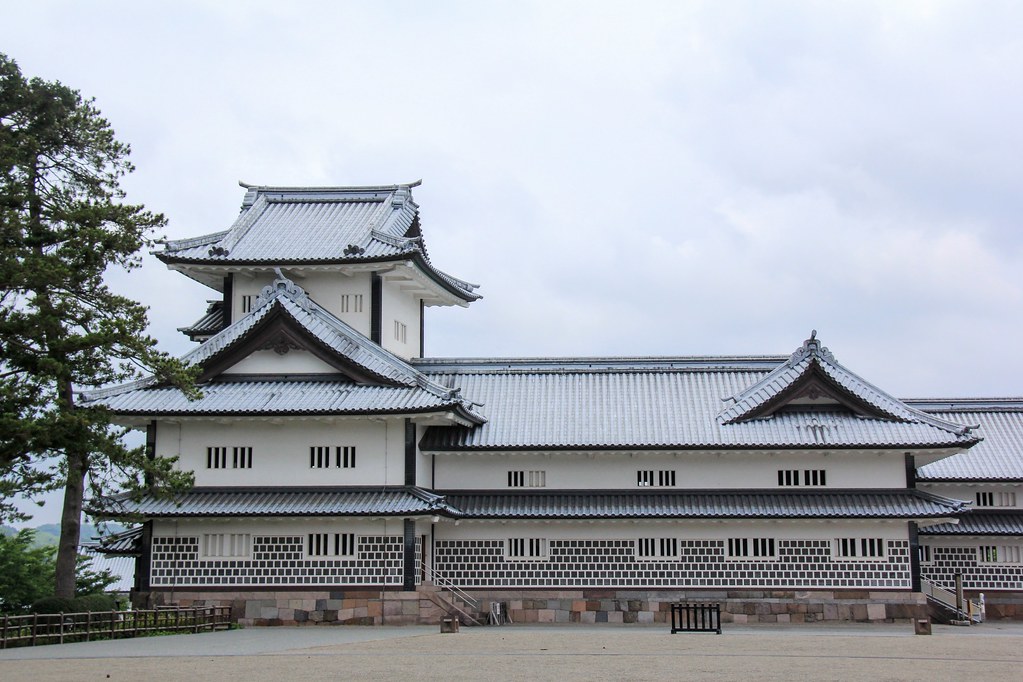 The city also has plans for redevelopment, slowly reconstructing some of the old buildings. You can check out the newly built turrets, storehouse, garden, and gates.

The castle’s garden is a lot smaller compared to Kenrokuen but just as lovely. Take a walk across small bridges connecting several islands surrounded by ponds with large goldfish.

The central location of the castle park also provides convenient access to some of the other sights such as Omicho Market, Oyama Shrine, and the geisha district.

Discover hidden staircases and passages at the Ninja Temple

As one of the more interesting Kanazawa points of interest, there is more than meets the eye at the Ninja Temple. The interior includes many traps, secret doors, and hidden passages. 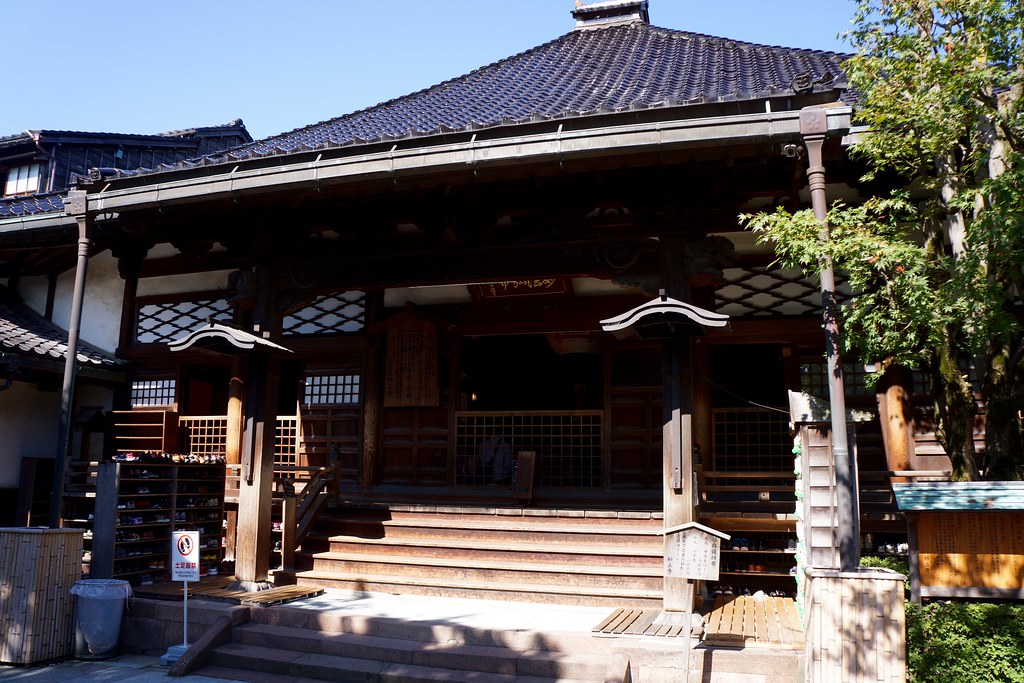 The temple isn’t associated with the ninjas but does have a stunning array of defenses. Historians believe that the defenses allowed the regional lords to use the building as a hidden military outpost.

Tours are available but the guides give the tour in Japanese. Luckily, the temple provides English-language guidebooks.

Located in the Teramachi District, the Ninja Temple is one of many temples in the area just south of the city. The district also includes a variety of interesting bookshops, art galleries, and clothing shops.

See how the geishas entertained at Higashi Chaya District 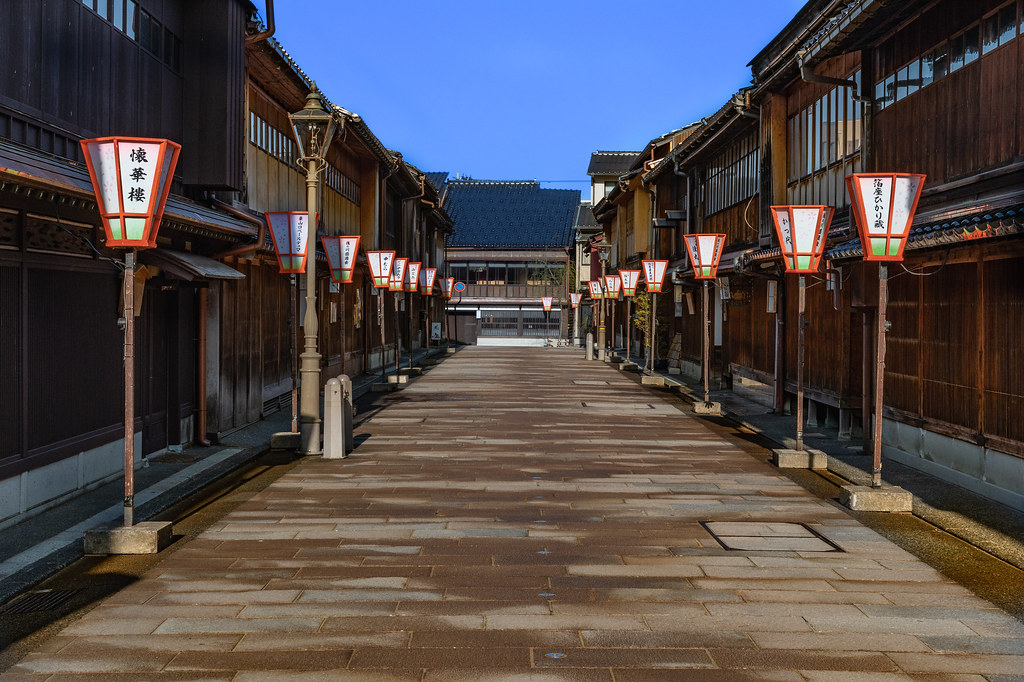 Only a few of the buildings offer entertainment with geisha performances. The others are a mixture of shops and museums. Most of these spots line a single street in the district.

One of the teahouses still operates and is open to the public. Tea service is provided with admission, giving you a chance to step back into time.

Another teahouse has been converted into a museum, showing rooms where the geishas performed and a kitchen area with various instruments and utensils.

If you only have 24 hours in Kanazawa, make sure that you visit at least one of the historic districts, such as Nagamachi. Known as the samurai district, the area includes a couple of authentic samurai houses. 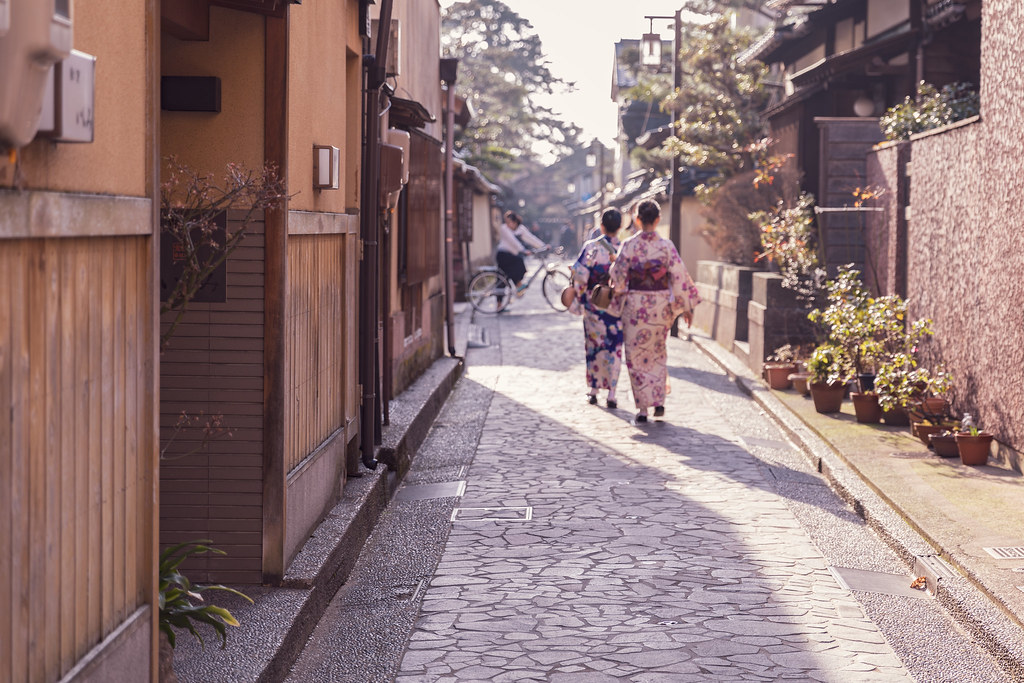 The city has redeveloped most of the district, erecting faithful reconstructions of the original houses. Walking around Nagamachi can feel just reliving some of your favourite samurai movies!

Luckily, one of the original houses is still in great shape and open to the public. The Nomura Clan House is a small site but gives you a look at how life was for the ancient samurais.

Nearby is the Shinise Kinenkan Museum, offering a chance to see how a traditional pharmacy looked. The restored pharmacy includes shelves lined with herbal remedies and a counter manned by a mannequin dressed in traditional clothing.

Shop for food and taste the local flavour at Omicho Market

If you want to know where to go in Kanazawa for fresh seafood and local cuisine, visit Omicho Market. 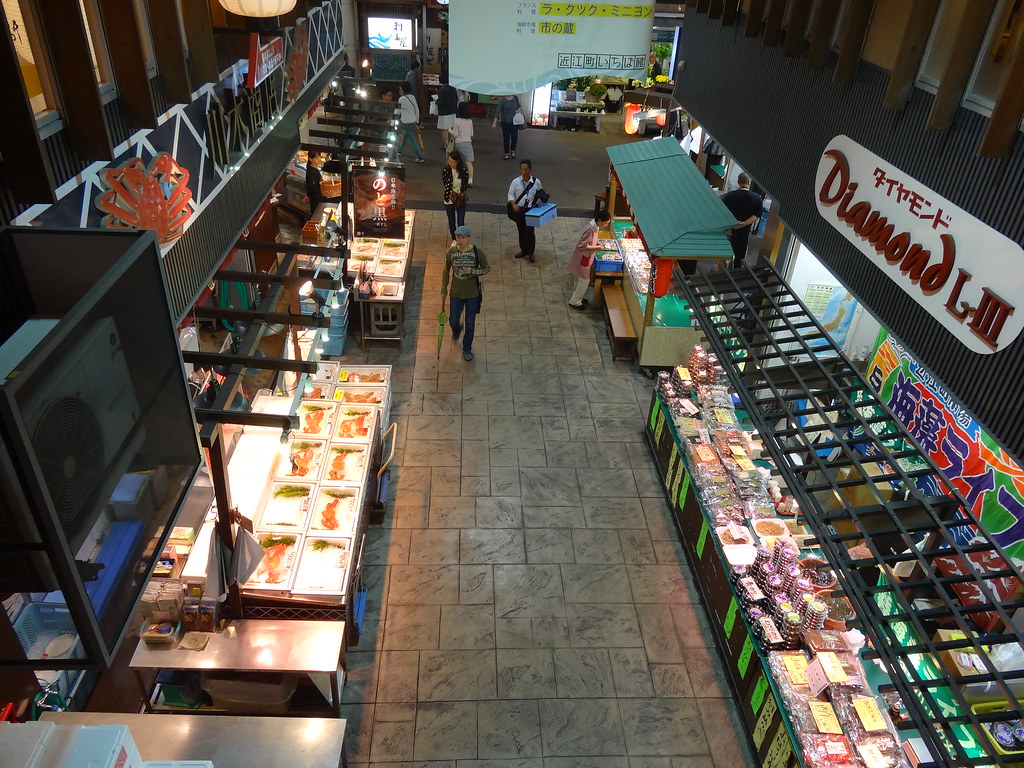 The busy fresh food market offers an array of local fruit, vegetables, seafood, and meat. You can also find numerous restaurants around the market area.

Located near Kanazawa Station and the former site of Kanazawa’s castle, it’s often one of the first places that tourists visit. The area includes over 200 stalls and shops.

While most of the vendors sell fresh food, you can also find clothes, flowers, crafts, and kitchen utensils or tools.

The busiest hours are in the early morning and around noon. During these times, you’ll find lines of locals and tourists outside most of the restaurants.

Get your cultural fix at Oyama Shrine

Your Kanazawa sightseeing tour should include a trip to some of the temples and shrines in the area. If you only have time to see one, try to visit Oyama Shrine. 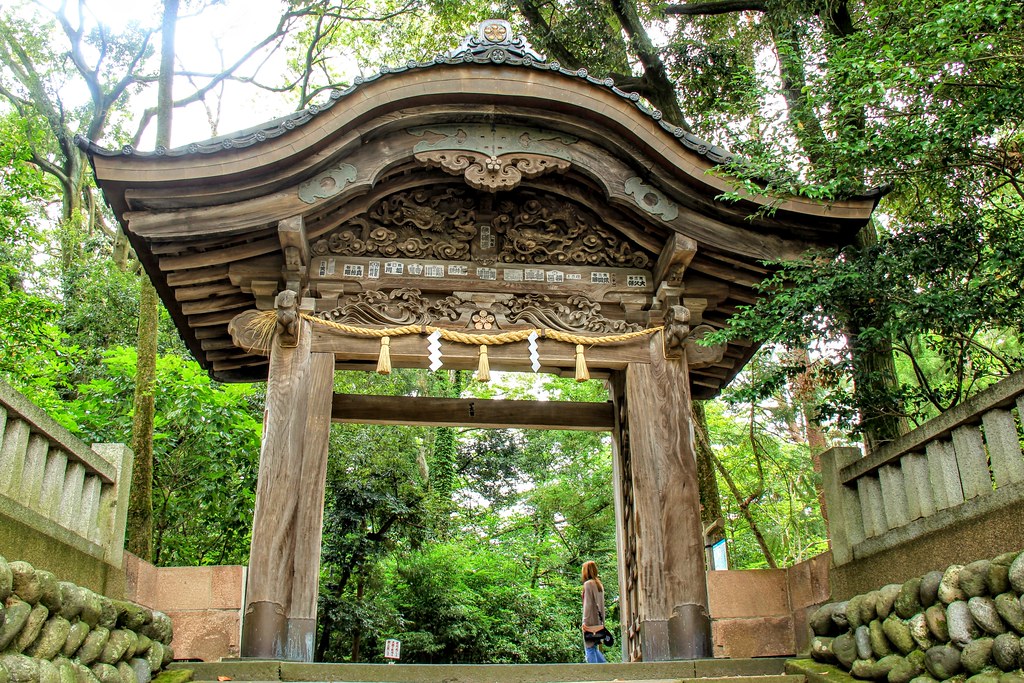 Dedicated to a former feudal lord, the shrine was built in 1599. It’s mostly notable for its gate designed by a Dutch architect. It features a combination of Asian and European influences and religious themes.

On the second floor, you’ll find a Dutch-style stained glass window. On the lower floor, the shrine looks the same as most other shrines with a mixture of Japanese and Chinese design elements.

Besides cultural and historical sites, there are other things to see in Kanazawa, such as art installations at the 21st Century Museum of Contemporary Art.

Built in 2004, the museum houses various exhibitions and unique pieces of art. As with many of the attractions, it’s within a few blocks of the castle site.

The circular building is one of the more modern structures in the city’s centre and has no front, back, or main entrance to its design.

It also has several public spaces to relax and rest your legs. These spots include a library and children’s workshops.

Admission is free but as with any museum, donations are recommended.

Where to stay in Kanazawa for sightseeing

As one of Japan’s most popular destinations, there’s plenty of choice when you’re scoping out the best places to stay in Kanazawa. Most of the top points of interest in Kanazawa hover in & around the centre. This is undoubtedly the easiest place to start navigating the accommodation scene. Here are a few of our top picks for the best hotels in Kanazawa…