For travellers, there’s hardly a place in the world with more to offer than London. Even after visiting a handful of times while living as a student in the UK—and a few more after that—I’ve barely scratched the surface of the British capital. (And I suppose that’s quite the norm for one of the most eclectic cities on earth.)

Certainly, you can’t expect to catch all the sights on single trip. Nonetheless, there’s no better way to start discovering England’s biggest metropolis than scouring through these top things to do in London…

What to do in London: The top attractions & best places to visit

Dive into the city’s history at the Tower of London

Whether you’re pinned to one day in London or have got a little time on your side, don’t leave without spending some time at Tower of London. This medieval castle, most famous for its prison and execution grounds, holds an important spot in the history of England and the city of London. 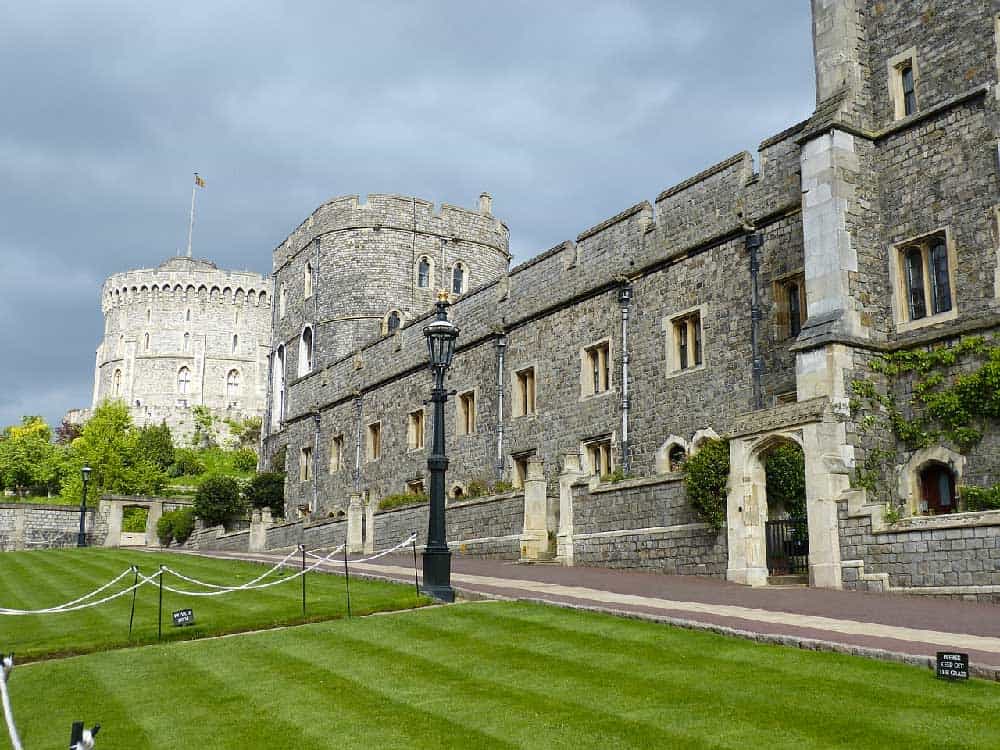 Assemble yourself onto a Tower of London Beefeater Tour to revel in the castle’s dark history, digging way back to 1066. Most intriguing is setting foot into Tower Gate where chilling stories of famous executions—such as the beheading of Henry VIII’s second wife, Anne Boleyn—come to life. Elsewhere in the castle grounds, dazzle at the magnificent Crown Jewels including the 105.6-carat Koh-i-Noor diamond.

Before leaving the area, walk outside the south wall of the Tower of London to scope out the iconic Tower Bridge, one of London’s most distinguishable sights, from one of its best vantage points.

Unfold over a millennium of English history at Westminster Abbey

Even if you’ve already spent what feels like a lifetime entering cathedrals & basilicas on your European itinerary, don’t skip out Westminster Abbey, the most important religious building in England and one of the prettiest places in London. Still an active place of worship, this Anglican church has functioned as the coronation and burial sites for English & British monarchs since William the Conqueror in 1066. 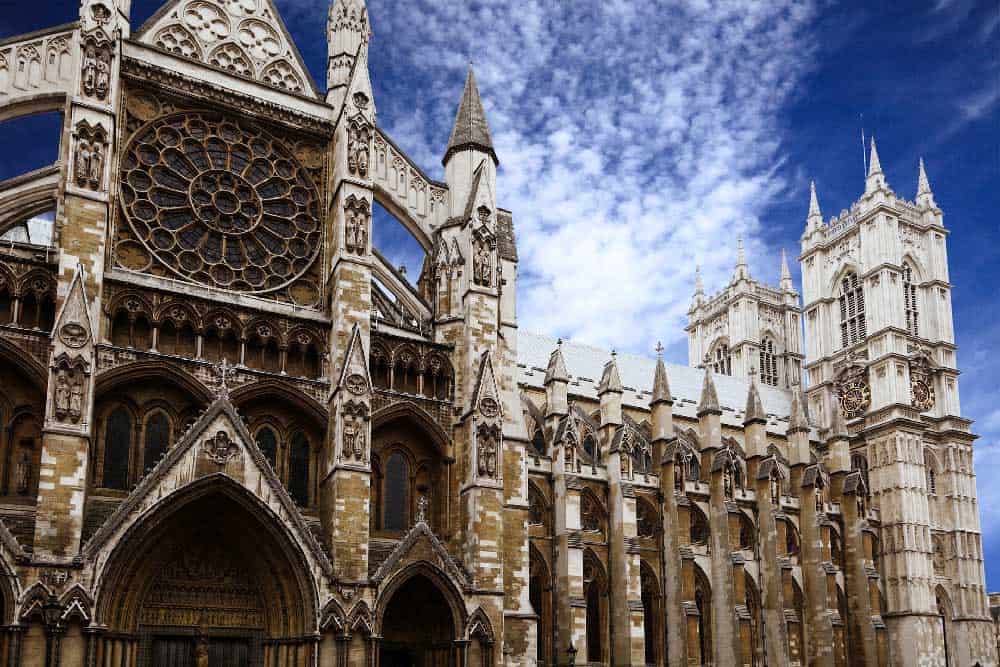 Entering inside Westminster Abbey puts on a display of more than ten millennia of British history. Peruse its paintings, medieval stained glass, royal effigies and other regalia before checking out the Royal Tombs and other memorials dedicated to famous British citizens throughout history such as Isaac Newton, Oscar Wilde, and, most recently, Stephen Hawking.

Gaze upon London from above at The Shard

Completed in 2012 and topping out at a whopping height of 309.7 metres, The Shard has completely redefined the skyline of London. This dramatic building, oddly named for an appearance likened to a giant shard of glass, isn’t just for staring at from below. It features an epic observation deck, The View from The Shard, unleashes, by far, the biggest vistas in the city, and is an absolute must-see while visiting London. 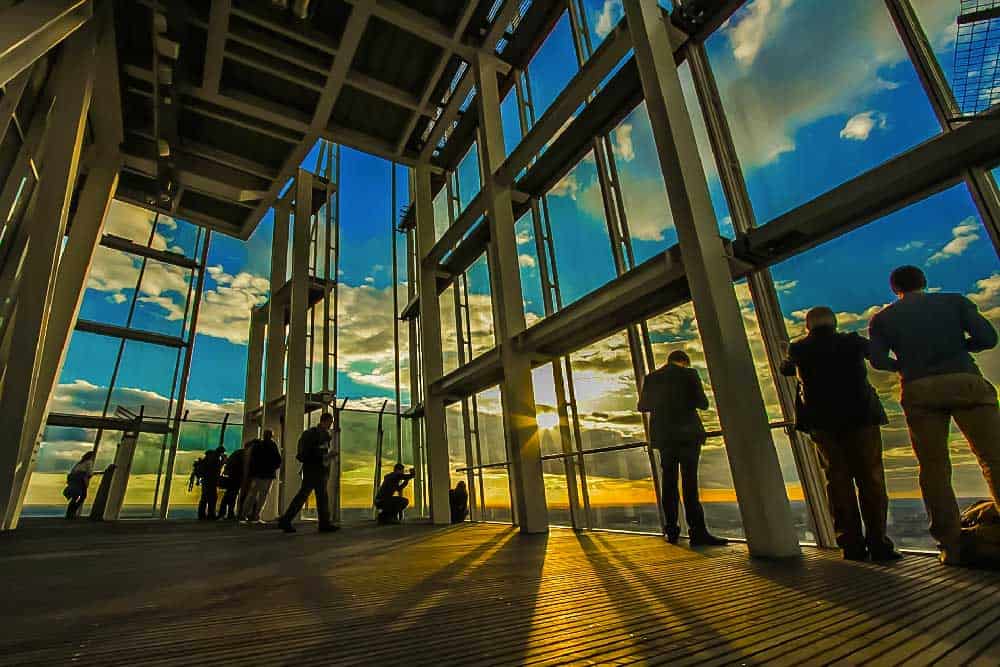 At 244 metres, The View from The Shard is double the height of any other observation deck in London. From these great heights, the 360-degree panorama sucks in the entire city at a glance, showing off over 60 kilometres on a clear day.

Getting to The Shard: The Shard is located Southbank of the Thames, close to London Bridge and Borough Market. The closest tube station is London Bridge.

Shop & dine at Brick Lane in the East End

When you’ve got at least two days in London or more, Brick Lane is a necessary escape from the Westminster tourist bubble and one that’ll round out your appreciation of the city. Throughout Brick Lane in London’s East End, the city’s immense diversity gets put on display as its lively vintage shops, restaurants, markets, and street art installations draw you in. 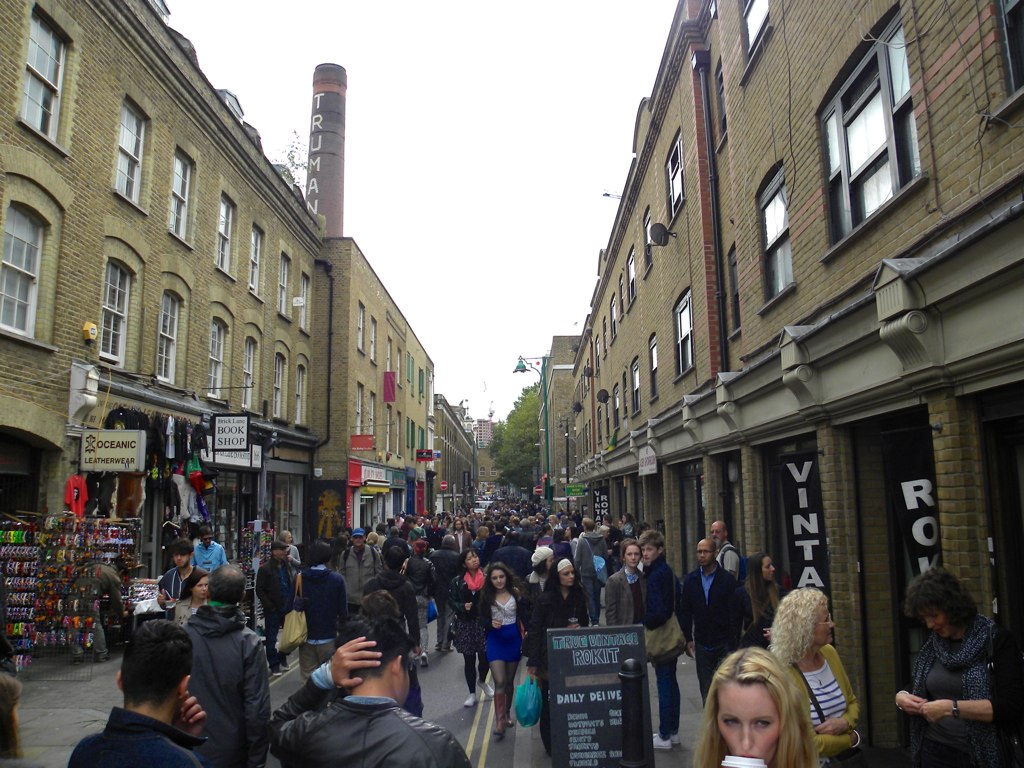 There’s a whole lot to discover around Brick Lane, but the best way to start might well be through the stomach. Growing from the cobblestones are a wide variety of eateries from Bangladeshi curry joints like The Monsoon to the famous snack haven of Brick Lane Beigel Bake.

Don’t miss a chance to check out Brick Lane’s edgy shops. From the cheeky jewellery of Tatty Devine to vintage finds at Rokit 101, there’s whole metric ton of cool stuff around here to duly relieve you of your quid.

Getting to Brick Line: The closest underground station to Brick Lane is Aldgate East. Exit the station onto Whitechapel High St. veering east. Hang a left at the first major street to your left to start exploring Brick Lane.

Take a spin on the Coca-Cola London Eye

Even if the Coca-Cola London Eye no longer has the monopoly on London city mega-views (thanks, of course, to The View from The Shard), its prime location among the historical architecture of Westminster and unique design easily slots it among the top things to do in London. 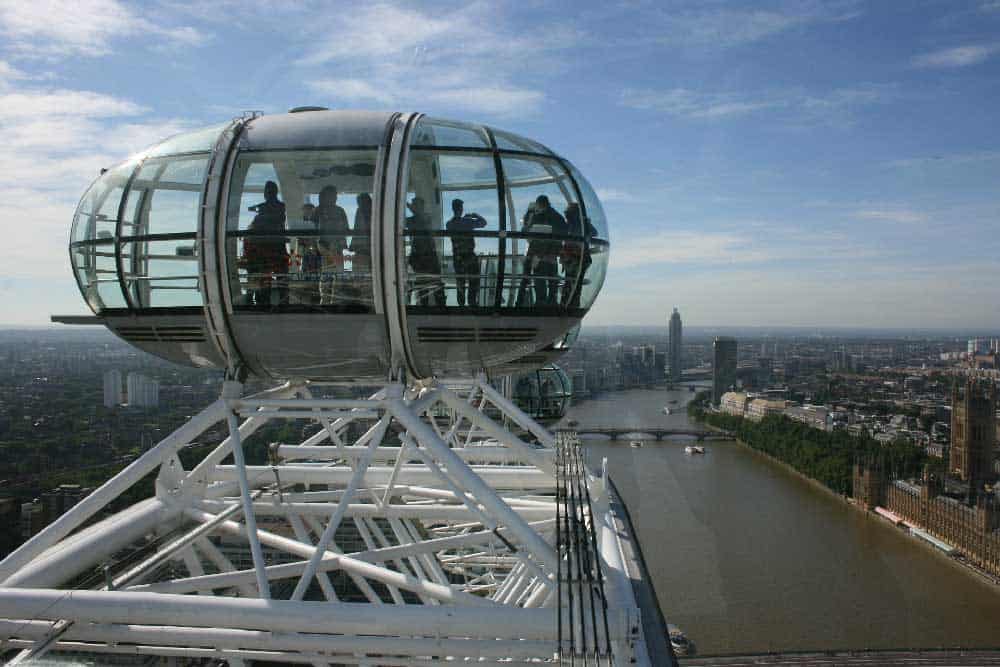 On the 30-minute ride on the Coca-Cola London Eye, you’re deposited into one of the 32 space-age air-conditioned glass capsules that deliver 360-degree views of London—with the River Thames & Westminster front-and-centre—along with commentary on the city’s most famous landmark. On a clear day (wish yourself some luck; this is London after all!), the view extends up to 40 kilometres across London.

Getting to The Coca-Cola London Eye: On the underground, the closest station is Waterloo, located just 5 minutes away by foot. The Westminster and Embankment tube stations are also within less than a 10-minute walk from The Coca-Cola London Eye. Thanks to its central location, I’d highly recommend staying near the London Eye; the area around here is undoubtedly one of the best launch-pads for an exciting London itinerary!

Visit the Queen at Buckingham Palace

Okay, maybe I’m writing a cheque I can’t cash here. Chances are you won’t get to enjoy a tea with Queen Elizabeth while you’re in London, but that doesn’t mean that Buckingham Palace shouldn’t be on your list of what to do in London. 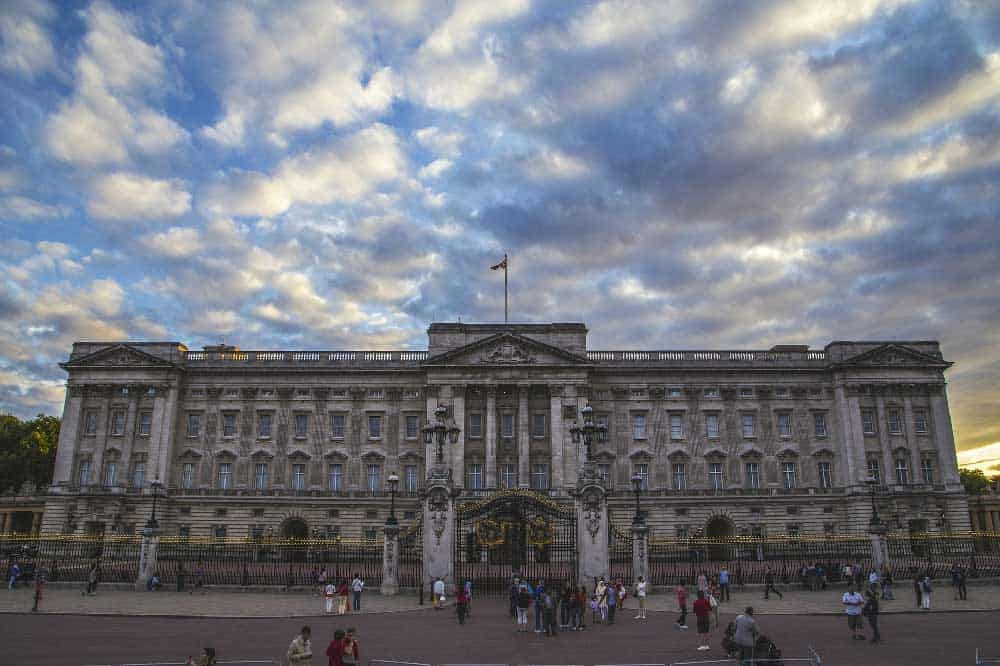 Built in several stages from the early-18th century onward, Buckingham Palace is one of the few royal palaces in the world that commoners are able to revel in. During the summer, the palace opens to tours, ushering visitors through 19 State Rooms adorned with artwork from European masters like Rembrandt & Rubens and other royal treasures.

When the interior of Buckingham Palace isn’t open to guests, still try to time your visit with the world-famous Changing of the Guard, usually taking place daily at 11:00am. To confirm times, check the official schedule here.

Feel the vibe of Camden Town

Undoubtedly, one of my biggest surprises while visiting London was Camden Town. Much like East London, Camden Town showcases London’s immense diversity by shuffling visitors into its cornucopia of buzzing markets and inspired international restaurants while its lovely canal always floating nearby. 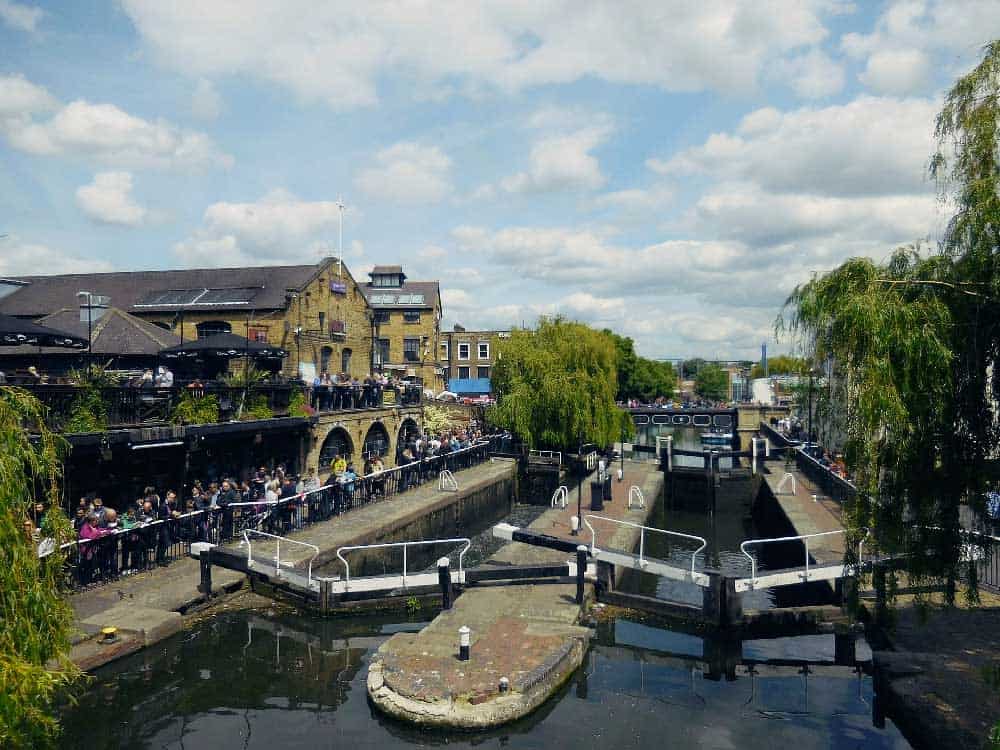 Even if you’re not keen on shopping or indulging in its legendary nightlife, Camden Town is a wonderful place to walk around and catch a side of London that’s lightyears from the sober tourist sites of Westminster. For a subdued Camden experience sweat out a curry at Masala Zone followed by a pint at one of the area’s most famous pubs, The World’s End.

Getting to Camden Town: Even if it feels like a completely different city (that’s the beauty of London, isn’t it?), Camden Town is just a handful of stops from central London. Camden Town Station lies on the Northern tube line and is just 7 stops (11 minutes) from Charing Cross Underground Station near Trafalgar Square in Westminster.

If you’re looking to quickly escape the urban buzz of central London, there’s hardly an easier than place to do it than St. Alban’s. This market town sits just 30 minutes from the city, making it one of the absolute easiest day trips from London by train. 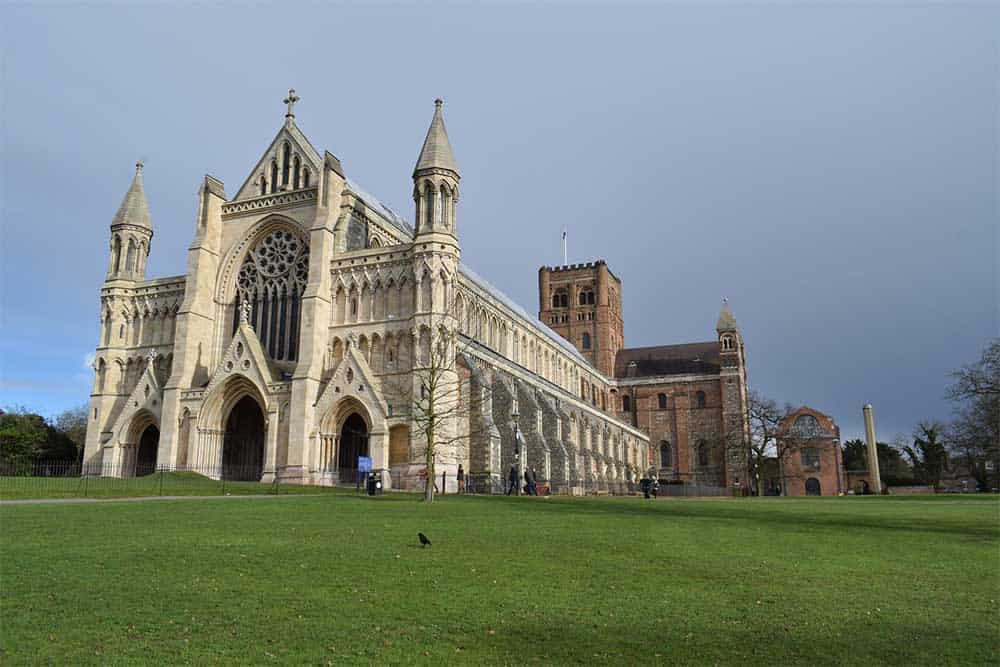 While the town centre is charming on its own, the real reason to visit is to stare in awe at St. Alban’s Cathedral. Dating back to 1077, this massive cathedral spins together Romanesque and Gothic architectural styles within its handsome façade. It’s one of the largest cathedrals in England whose 85-metre-long nave is the longest of its kind in the country.

After you’ve dazzled at the exterior, be sure to take a peak inside where you’ll discover paintings from the 13th and 14th centuries as well as a shrine to the cathedral’s namesake St. Alban, Britain’s first Christian martyr.

Brush up with royalty at Windsor Castle

While we’ve already surmised that there’s little chance the Queen will invite you in for a Saturday afternoon tea that doesn’t mean that you should leave Windsor Castle out of your London itinerary. Located less than an hour away from the city, Windsor Castle is one of the top day trips from London and a must for any history buffs—even if you’re not an avid royal-watcher!

The castle’s history dates back to the 11th century when it was built by William the Conquerer. Over 39 monarchs have called Windsor Castle home, making this royal residence not just one of the best castles near London, but the oldest continuously inhabited palace on the entire European continent. 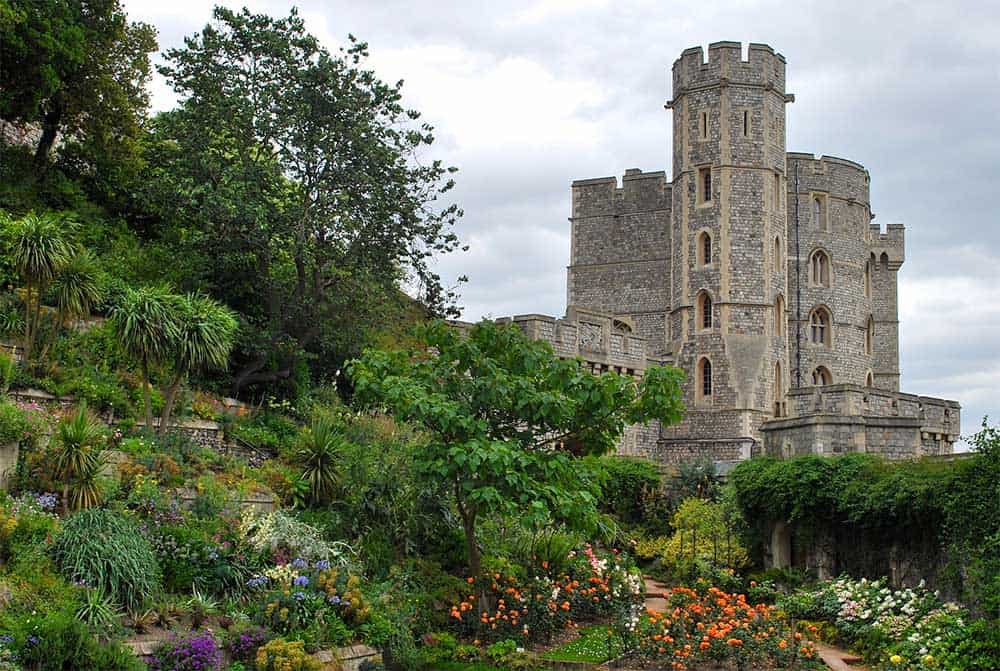 As you stroll through Windsor Castle, you’ll be marvelled by its grandiose architectural styles. Most impressive for visitors are the State Apartments, featuring regal furnishings and a rare collection of artwork from renowned European masters like Rubens and Van Dyck; and St. George’s Chapel, a stunning Gothic church that’s held countless royal weddings and houses the tombs of several former British monarchs including Henry VIII and George VI.

Getting to Windsor Castle: From central London, the easiest route is the direct train from London Waterloo to Windsor. The journey time is approximately one hour.