What are the best things to do in Madrid besides visiting the typical tourist traps? You’ll be happy to know that this magnificent Spanish city has plenty to offer beyond the typical “touristy stuff.”

If you spend even just a few minutes walking around any of the public squares in the capital of Spain, you’ll quickly learn that Madrid is a very welcoming city. The people are outgoing and the streets are pedestrian friendly.

Madrid is a city full of cafes, tapas, and rich history. In search of the top points of interest in Madrid, you’ll become surrounded by amazing architecture and some of the most renowned museums in the world.

Don’t know where to start exploring the best places to visit in Madrid? Plan your trip with this guide to the best Madrid attractions…

Got more travel plans on the horizon? Check out all of our other attractions guides and our Spain Travel Guide for more ideas on where to go, when to visit & what to do!

What to do in Madrid

Madrid is an architecture enthusiast’s dream vacation. You can’t turn a corner, whether you have just one day in Madrid or week, without coming across a historic building with an intricate facade (whether it’s Gothic, Romanesque, or Modernist in style).

And besides the architecture, there are plenty of other things to see in Madrid from parks to museums to bustling traditional markets. 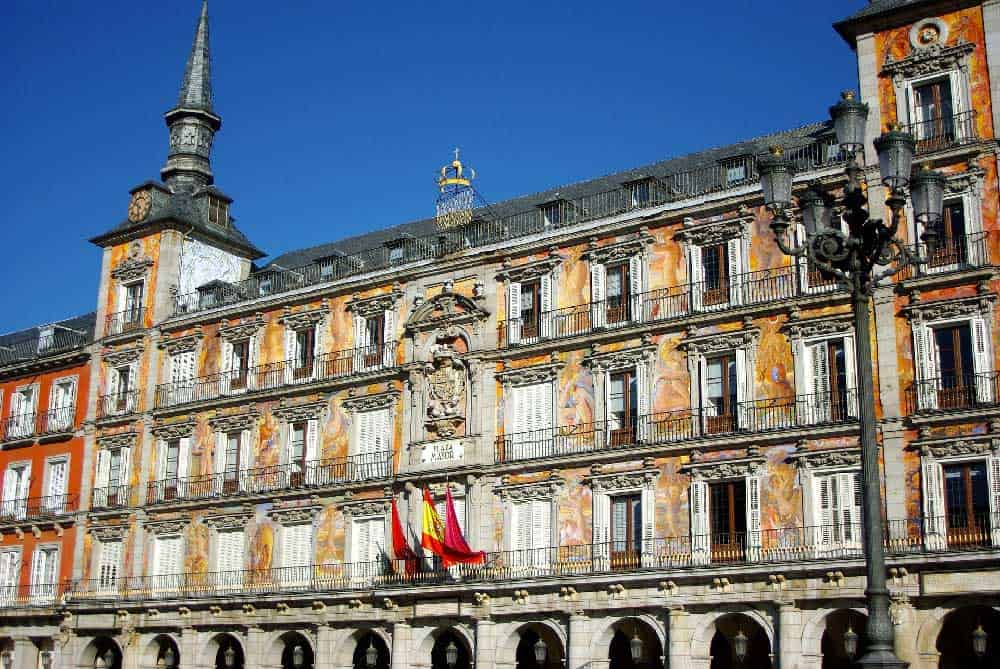 The public square features a large open area with statues, public art, and benches. If you happen to visit Madrid during winter, Plaza Mayor is also home to the city’s most famous Christmas market featuring hundreds of stalls. Throughout the entire year, you’ll also find street performers, cafes, and restaurants around the square.

As a major tourist destination in Madrid, the restaurants in the area tend to be a little pricey and run-of-the-mill. Although the restaurants may not be cheap, there are plenty of vendors and food stalls selling inexpensive desserts and snacks, including delicious fresh churros dipped in thick hot chocolate, one of the must-eat foods in Madrid. Opt for a food stall and you won’t be disappointed.

When you don’t know where to go in Madrid, Puerta del Sol is a good starting point. It’s in the heart of Madrid and all major roads intersect at this junction. It’s another one of the main public squares and provides convenient access to the main Madrid attractions and landmarks. 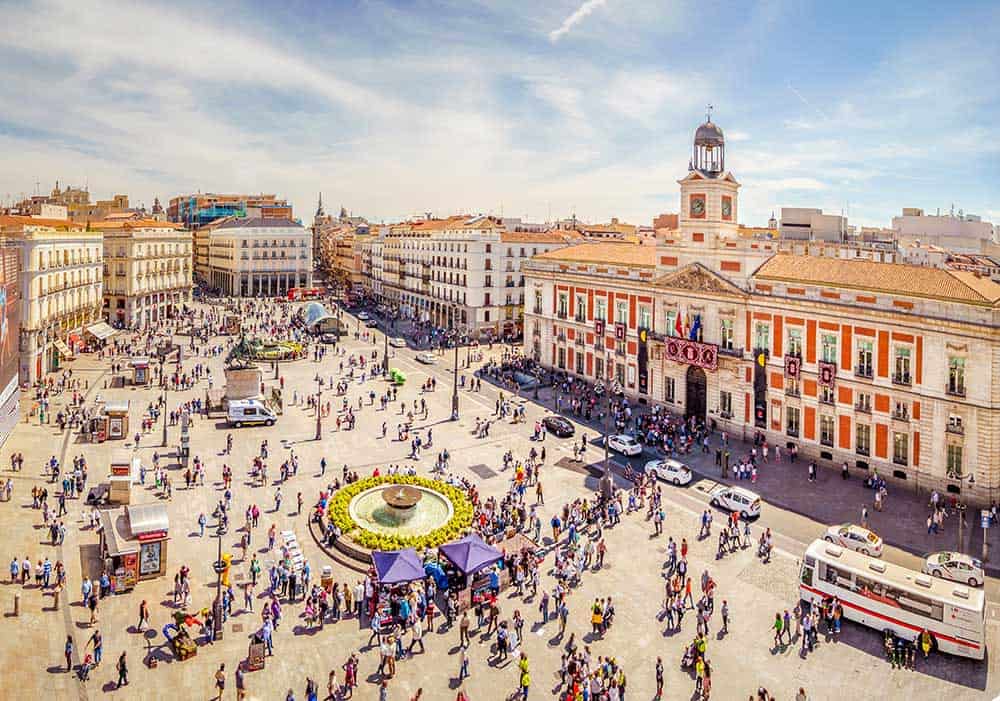 Puerta del Sol is the Gateway of the Sun and is Spain’s version of Times Square. Like Plaza Mayor, the area is filled with vendors and performers and surrounded by cafes and shops.

It’s also incredibly busy, especially by midday. Unless you enjoy people watching, you may need to arrive early if you want to explore the square without walking shoulder to shoulder with other tourists.

El Rastro Market is one of the best places to visit in Madrid if you like to shop. It’s the largest flea market in the region, but it’s only open on Sundays. It’s also in the centre of one of the more lively and diverse neighbourhoods in the city. 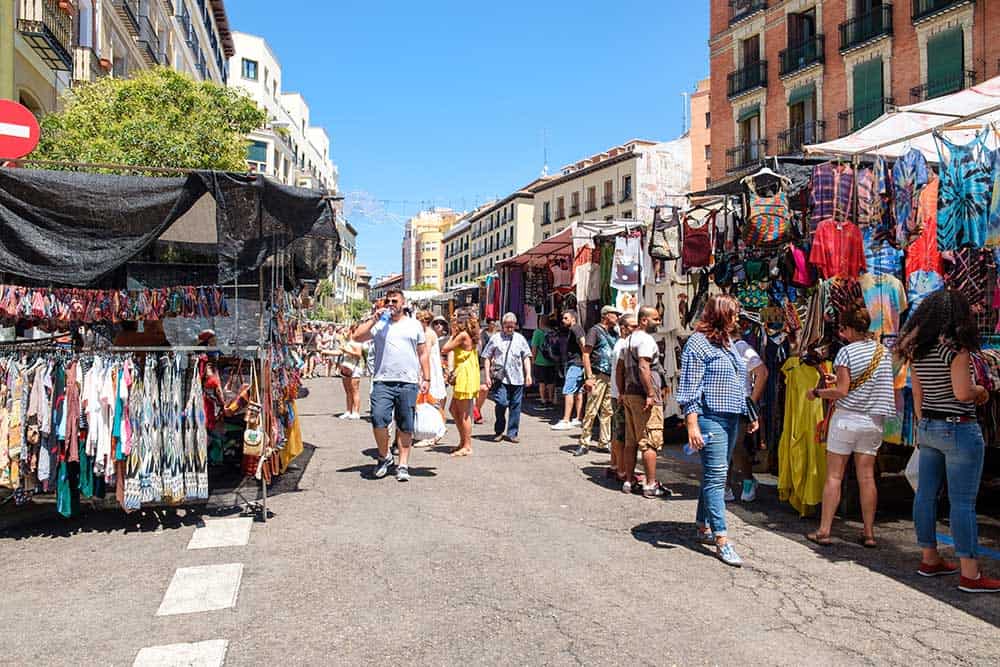 You can shop for clothing, souvenirs, antiques, art, and random household items.

El Rastro began operating in the 15th century and has evolved over the years. The market is a loose collection of merchants that line the streets of the neighbourhood. There are hundreds of stalls and shops selling just about anything that you can think of.

As the market is only open on Sundays, it attracts a large crowd. If you want to avoid the madness, you should plan on arriving by 9 AM so that you can get out before noon – and the rush of locals and tourists.

The Royal Palace is typically at the top of the list of Madrid attractions for tourists and for good reason.

The palace is a magnificent site and a must-see if for anyone travelling to Madrid. The massive structure includes over 3,000 rooms and is believed to be the largest royal palace in Western Europe. It no longer houses the royal family, but since 1978 it’s been open to the public to visit and enjoy. 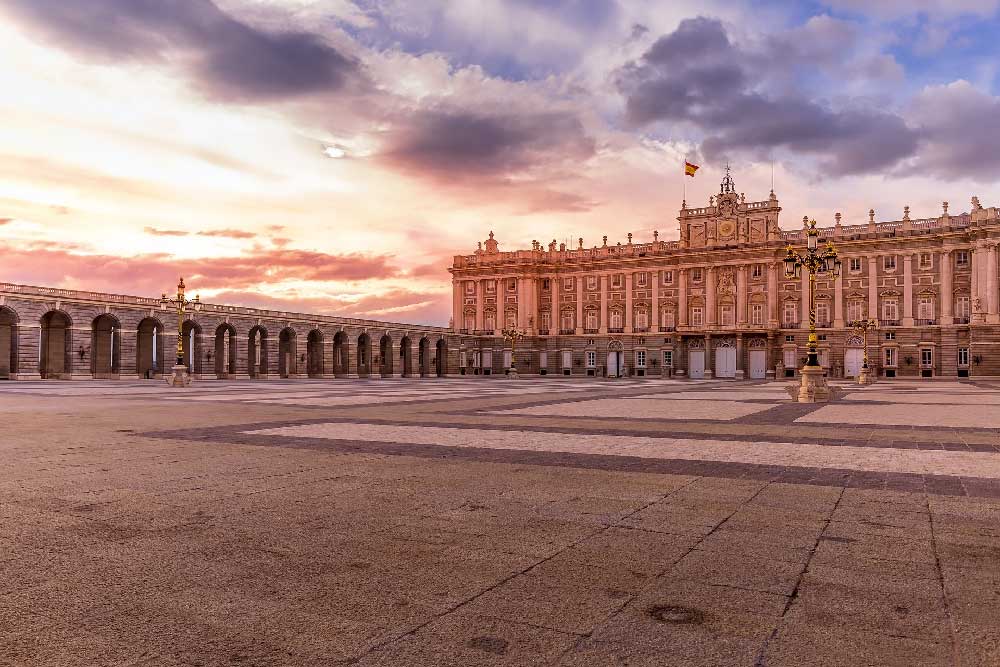 You can tour the inside of the palace, which includes a couple of cool locations to check out. The armoury room and the royal pharmacy both contain historic artifacts that are worth examining, even if you’re not a history buff.

When you’re done touring the palace, you can visit the Sabatini Gardens. They’re on the palace grounds and provide a better view of the building. They’re also a beautiful example of neoclassical garden design, with carefully sculpted topiaries and geometric hedges.

Plaza de Cibeles isn’t located in the heart of the city like the previous two public squares, but it’s one of the most famous squares. It’s mostly known for its signature building – the Cibeles Palace. 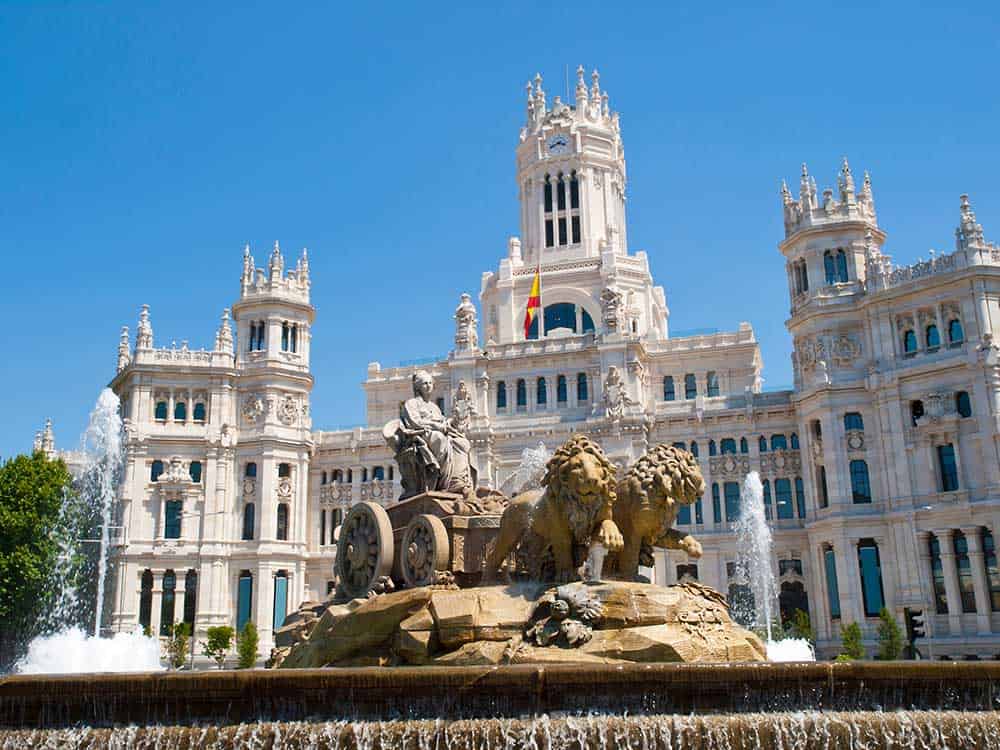 The palace used to be a post office, making it one of the most intricately designed post offices that you’ll likely ever see. The palace now also serves as Madrid’s City Hall.

Outside of the palace is a large statue of Cybele. She was a Roman goddess known as the Great Mother. The statue is surrounded by a fountain and has the palace as a background, creating a perfect photo op.

While Madrid is full of historically significant buildings that reflect the European architecture of the 12th to 18th centuries, one of the oldest structures surprisingly comes all the way from Egypt. 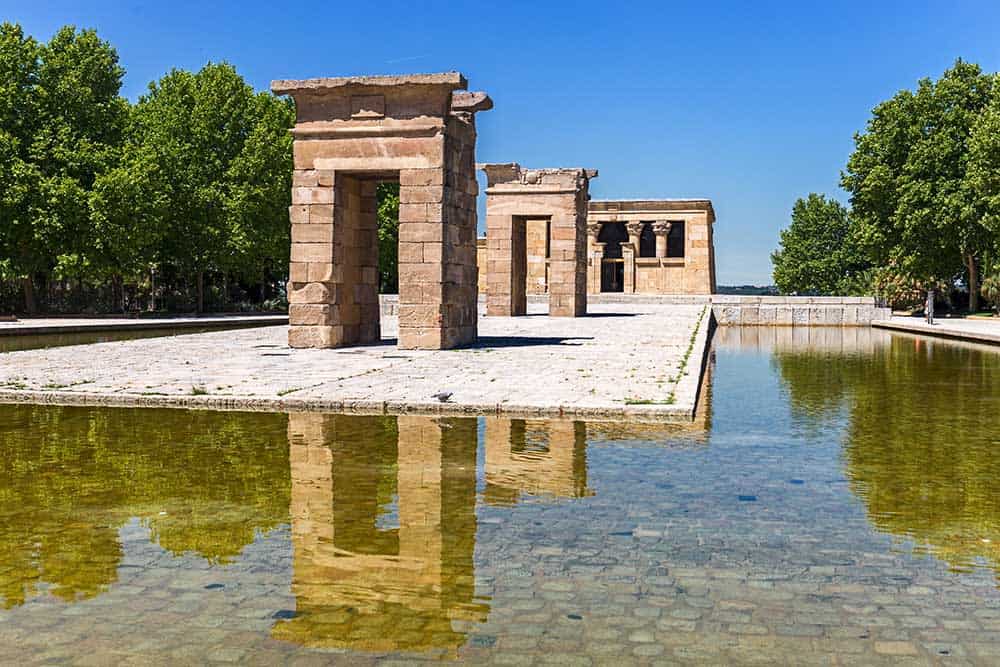 The Temple of Debod is an ancient Egyptian temple that was built around the 2nd century BC near the Nile River.

In the 1960s, the temple was at risk of damage due to the construction of a nearby dam. To save the site, Egypt donated the temple to Spain.

The temple was dismantled and then rebuilt in Parque del Oeste, which is, along with the nearby Casa de Campo, one of the best nature escapes in Madrid. It’s near the Royal Palace and is quite an interesting sight set amongst the other glorious buildings of Madrid.

Madrid’s Golden Triangle of Art refers to three important museums that are closely located near the centre of the city. If you visit one of these museums, you should have time to visit the other two. 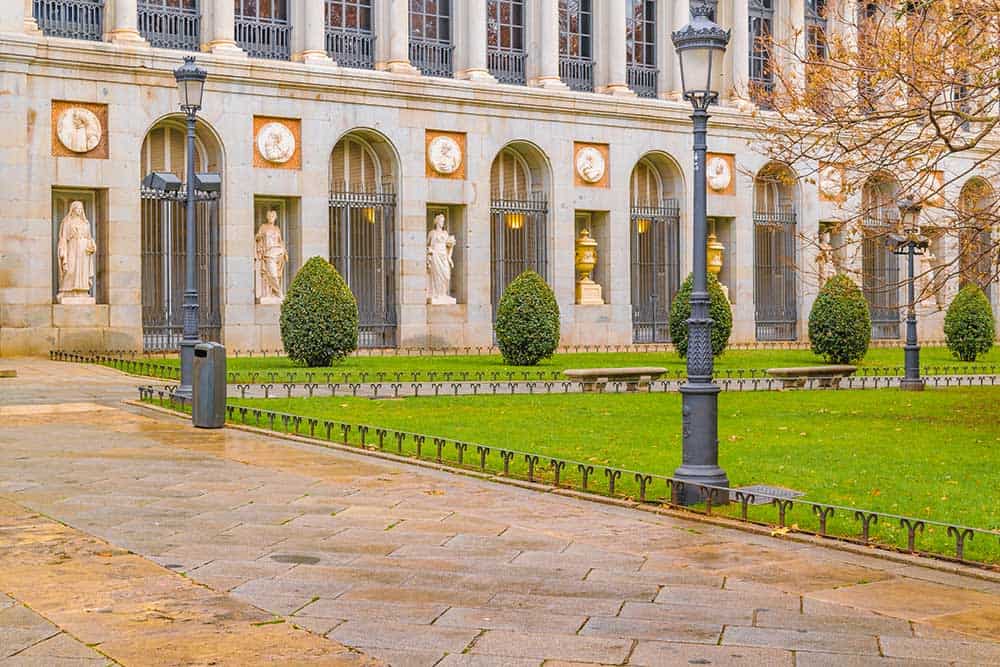 The most famous of the three is the Prado. It’s also one of the top Madrid points of interest, due to its extraordinary collection of 12th to 18th-century artwork. The museum includes many important pieces from famous artists such as Goya, Rubens, and Bosch.

The Thyssen-Bornemisza is a private museum with a collection of Impressionist art. You’ll also find 60’s pop art and various avant-garde works.

If you plan on visiting all three museums, visit them in the order (Prado to Thyssen-Bornemisza to Reina Sofia) to travel through European art history.

Where to stay in Madrid for sightseeing

With over 3 million people sprawled over a huge area, choosing where to stay in Madrid can seem like a gargantuan task. Truthfully, even with the extensive selection of accommodations here, it’s not quite as difficult as it first appears.

For most travellers, staying somewhere in the Centro is a no-brainer. It’s home to many of the best places to visit in Madrid and is where you’ll spend the bulk of your time exploring this fascinating city.

Not sure where to start? Here are a couple of the best hotels in Madrid for travellers: