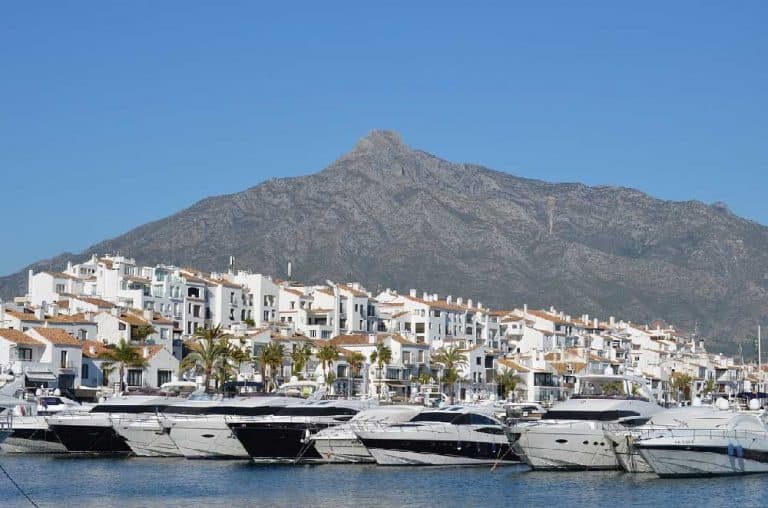 As the coastal playground of the rich and elite, Marbella offers up picturesque beaches, lavish resorts, and a variety of fine dining establishments. It’s considered one of the best destinations in Spain for foodies and those wanting a luxurious holiday.

Besides gawking at the displays of wealth, there are many things to do in Marbella. Between the upscale coastal estates, hotels, and villas, you’ll find upscale boutique shops, trendy bars, and a marina filled with high-end yachts. Visit the historic buildings in Old Town, or go window shopping along the Golden Mile.

Not sure where to start? Begin organizing your itinerary with this guide to the top Marbella attractions…

What to see & do in Marbella

Stroll through the whitewashed buildings of Marbella Old Town

Some of the top things to see in Marbella are found in the oldest part of the city. The Old Town district includes a labyrinth of winding streets laid with red tile and lined with whitewashed buildings featuring terra cotta roofs. 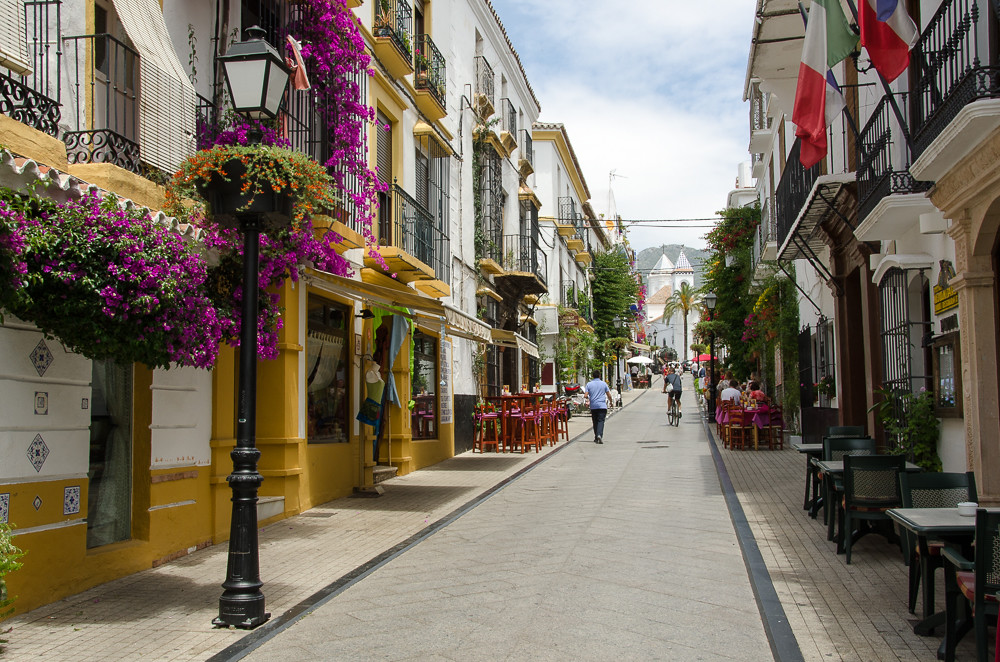 Many of the buildings were built during the Renaissance period, which is evident from the crumbling facades that residents have painted over numerous times.

Within Old Town, you can explore the popular Plaza de los Naranjos, one of the main public squares in the city. It’s become the main meeting point for tourists and locals alike.

The area includes a small orchard of orange trees, providing a lovely fragrance as you stroll from the town hall to Ermita de Santiago – the oldest parish church in Marbella.

If you want to know where to go in Marbella for a good time for the entire family, head to Costa Water Park. The aquatic park includes a variety of fun attractions for kids and adults. 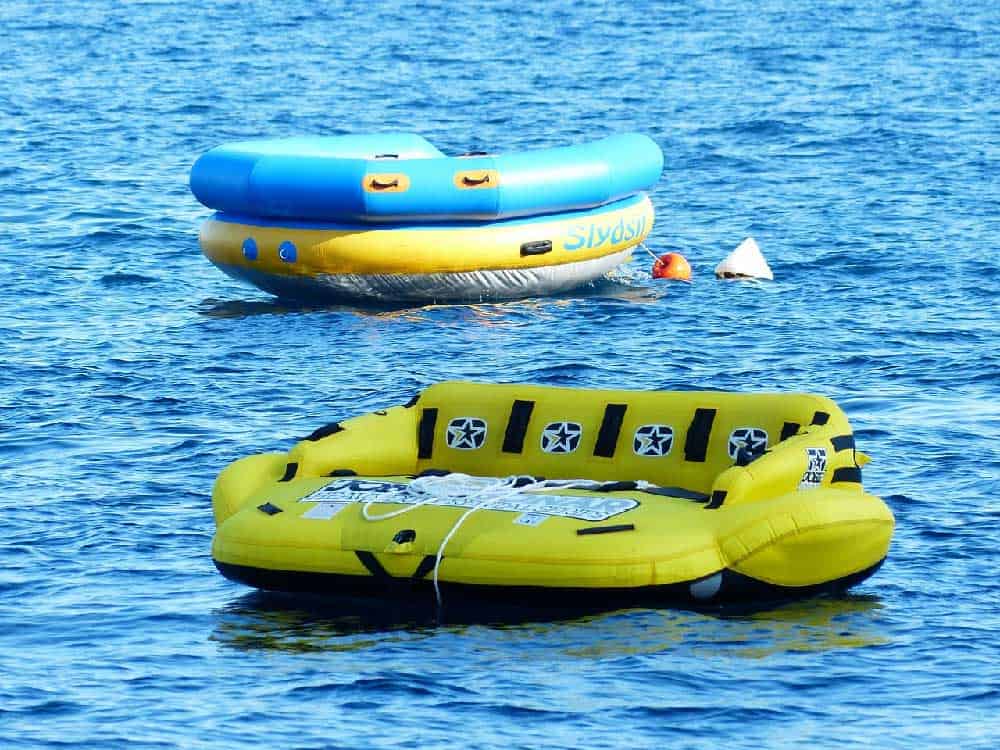 The park includes over 800 square metres of excitement. You can slide down water slides, jump on water trampolines, or get flown into the air from a giant inflatable cushion.

Just one word of warning – children under the age of six are not permitted.

Of course, this isn’t the only spot in Marbella for water activities. All along the seafront, you’ll find companies offering jet-skis, parasails, powerboats, and wakeboards for rent.

If you’ve only got 24 hours in Marbella, head straight to Puerto Banus. The port is just a few kilometres east of Old Town and a sharp contrast to the old buildings. 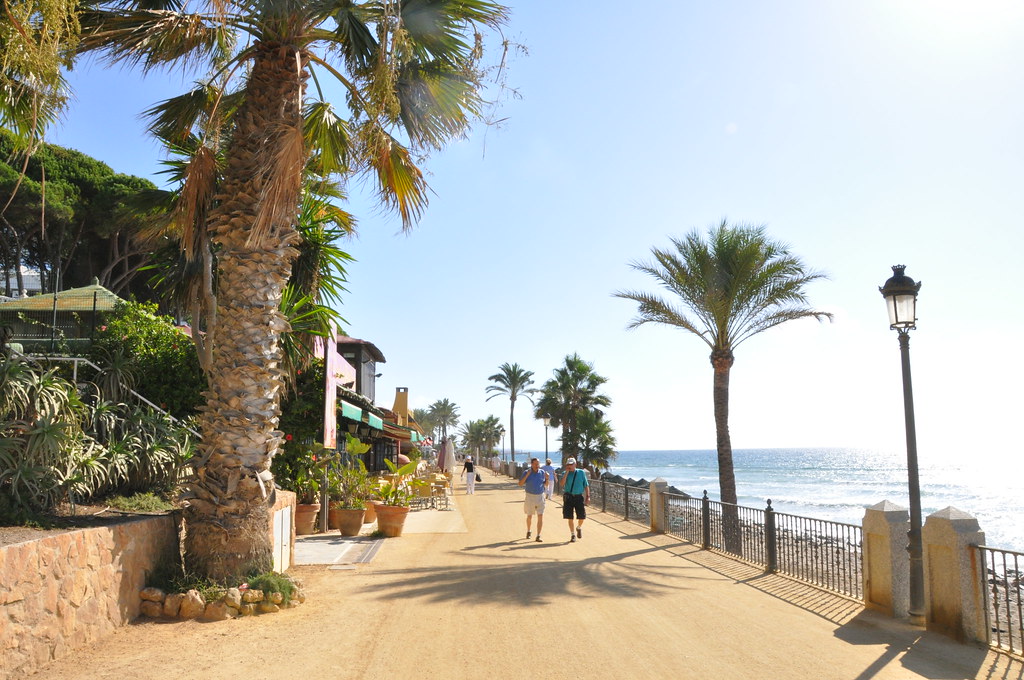 The stylish, flashy port area regularly draws comparisons to the French Riviera. After a few minutes in the area, you’ll see why.

Everywhere you turn, you’ll see luxury sports cars, boutique shops, and people who look as if they just stepped out of a cologne ad.

While you’re in the area, you’ll need to visit the Marina Banus Shopping Centre. It’s one of the main Marbella points of interest for those wanting to shop. It includes all of the name brand shops that you could want.

Whether you walk around the square or the shopping centre, you’ll have a variety of options for high-end dining. Enjoy local cuisine or international cuisine at Michelin-ranked restaurants.

As part of your Marbella sightseeing tour, try to find all of the Dali sculptures found throughout the city, starting with the massive Rhinoceros sculpture. 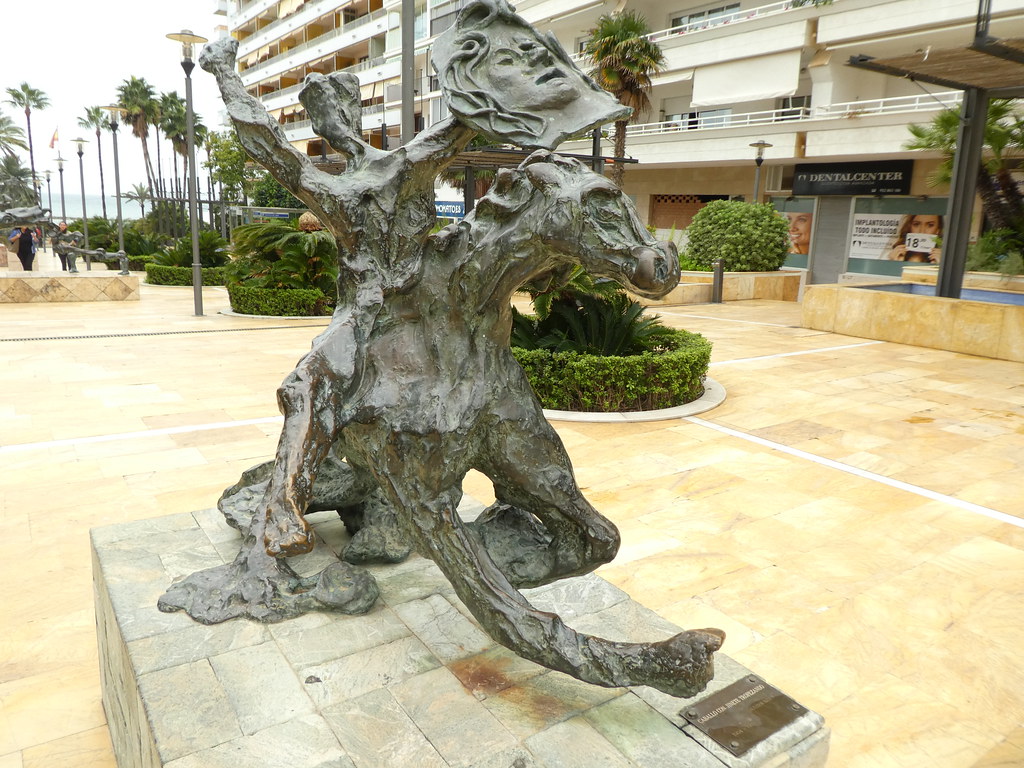 The large green sculpture sits at the entrance to Puerto Banus and weighs over three tonnes. It’s one of five Dali sculptures. While Dali had no connection to Marbella, he presented several art pieces to the city.

One of the most famous sculptures depicts the Greek hero Perseus beheading Medusa, while another depicts the Roman god Mercury. Dali even dedicated a statue called Gala Gradiva to his wife.

Some people debate whether all five Dali statues are originals or copies. Whether or not they’re truly by Dali, they’re fun to look at and something you won’t find anywhere else.

Find a bench in Almeda Park

The city of Marbella includes many wonderful parks with fountains, sculptures, and lots of plants. Out of all the parks, Almeda Park takes the prize as one of the best places to visit in Marbella. 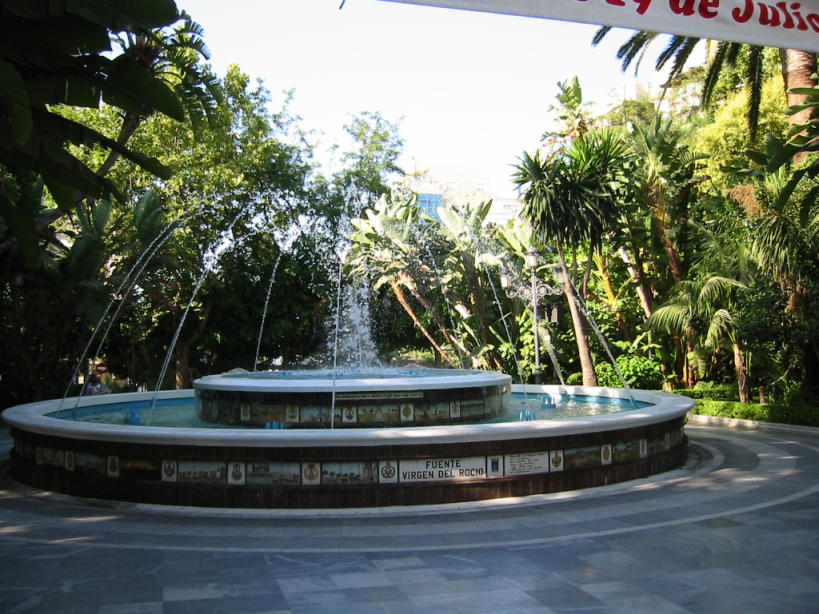 Leading up to and away from the park are long paved walkways surrounded by plants and featuring a thick canopy of foliage.

The park is just south of Old Town. When you reach the park, you’ll feel as if you’ve entered your own private garden.

The park offers plenty of shade, shielding you from the oppressive sun when visiting the city during the warm, humid summer months. It’s also got more than enough benches, so you should have no problem finding a spot to sit down and relax before continuing your itinerary.

Just keep in mind that it’s one of the most popular spots. In the middle of the day, it’s incredibly busy and often full of tourists and locals.

If you want to know what to do in Marbella to get your fill of historical sightseeing, put Iglesia de la Encarnacion on your list.

Located in Old Town, the Church of the Incarnation is the oldest and most important church in the city. Built in the 16th century and completed in the 18th century, this church was constructed on the site of a former mosque.

The city was re-conquered from the Moors much later compared to other parts of Spain. As with most mosques in the country, it was quickly converted to a Christian house of worship.

Some of the original architecture remains, but with alterations to fit the Christian theme. For example, the church’s tower was once a minaret – a type of slender tower typically found on mosques.

The interior of the church features a surprisingly spacious basilica with a vaulted central nave and Corinthian columns. It’s also heavily adorned with gold and gold leaf décor, adding to the grandeur.

Explore the village of Júzcar

If you’ve got a little extra time to kill while visiting Marbella, you absolutely must pop into Júzcar, undoubtedly one of the prettiest villages in Andalusia. A mere hour’s drive away, this small village is famous for its picturesque sky blue-coloured buildings. 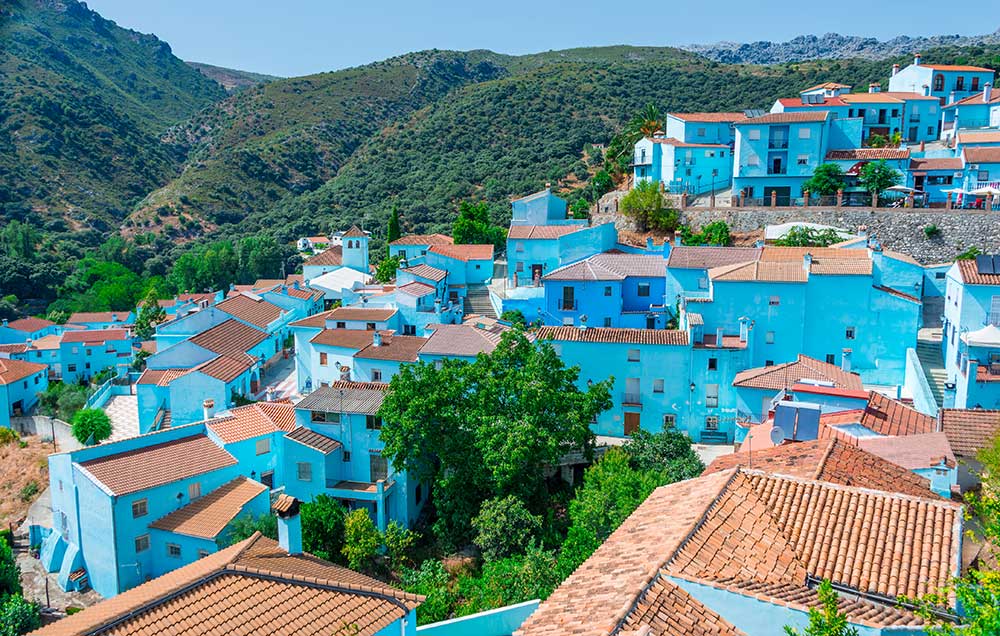 Surprisingly enough, this little town, now famous for its bright colours, wasn’t always so flashy. Less than a decade ago, Júzcar was little more than a typical dime-a-dozen whitewashed Andalusian village. It wasn’t until the town hosted the worldwide premiere of the Smurf movie, that all of its simply adorned white buildings got a fresh coat of Smurf blue paint.

Tourism quickly exploded and capitalizing on its 15 minutes of fame, the local authorities decided to keep the blue and add Smurf-inspired street art throughout the town. Truthfully, there isn’t much to do in Júzcar, but it’s a great place to kill an hour or two and brighten up your Instagram.

Where to stay in Marbella for sightseeing

With the city’s relatively small size, choosing where to stay in Marbella can be surprisingly easy, especially compared to other Spanish destinations. The best area for most travellers is the Old Town, where you’ll discover many of the top points of interest in Marbella. To get the best selection available, be sure to book your hotels well in advance; Marbella is an insanely popular place to visit!